Keep Your Hands And Arms Inside The Car

Hello!
Welcome all to Attire's mind.  I hope you enjoy the ride.  It promises to be a fascinating, complex and fun journey.

This first post here, I thought I would dive right into the deep end.  One of the most recent things to show up in the world of attire is post gender design.  Its also known as gender neutral design.

Now, there have always been people among us who have been of ambiguous sexuality or appearance.  And there have always been certain manners of dress that accentuate that ambiguity; for example the clothing of people in religious communities, which are deliberately designed to minimize the sexual attractiveness and availability of the wearer.  For most of us however, the sense of what is appropriate for a male or a female is quite clearly defined and though we may not like to think so, informs our perceptions to a very significant degree.  As we become more truly a global community, and as the strictures that have held male and female in separate camps for eons continue to fade, a growing number of people, among them an ever increasing number of designers of clothing, have decided to consciously push this concept forward by creating collections that either tweak the current ideas of the male/female dichotomy, or blow it to smithereens completely.

But lets begin with the littlest of us first.  Fashion and Attire are not only the province of the adult. We train our children from infancy in the culture of attire; and the separation of male and female through it. Interestingly, one of the first places where gender neutral clothing has appeared in great quantity, is baby clothes.  Though the pink and blue rule is widely regarded, more and more makers of infant and toddler clothing are choosing instead to go with bright colors and patterns that are not tied to our cultural memes about gender specificity. 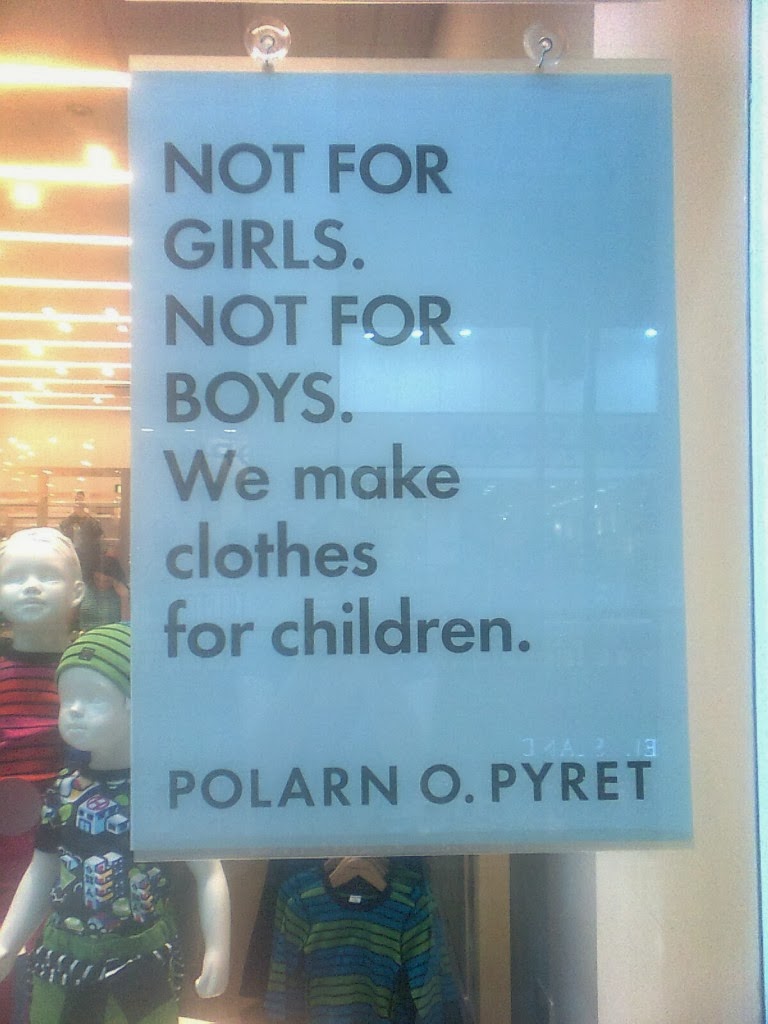 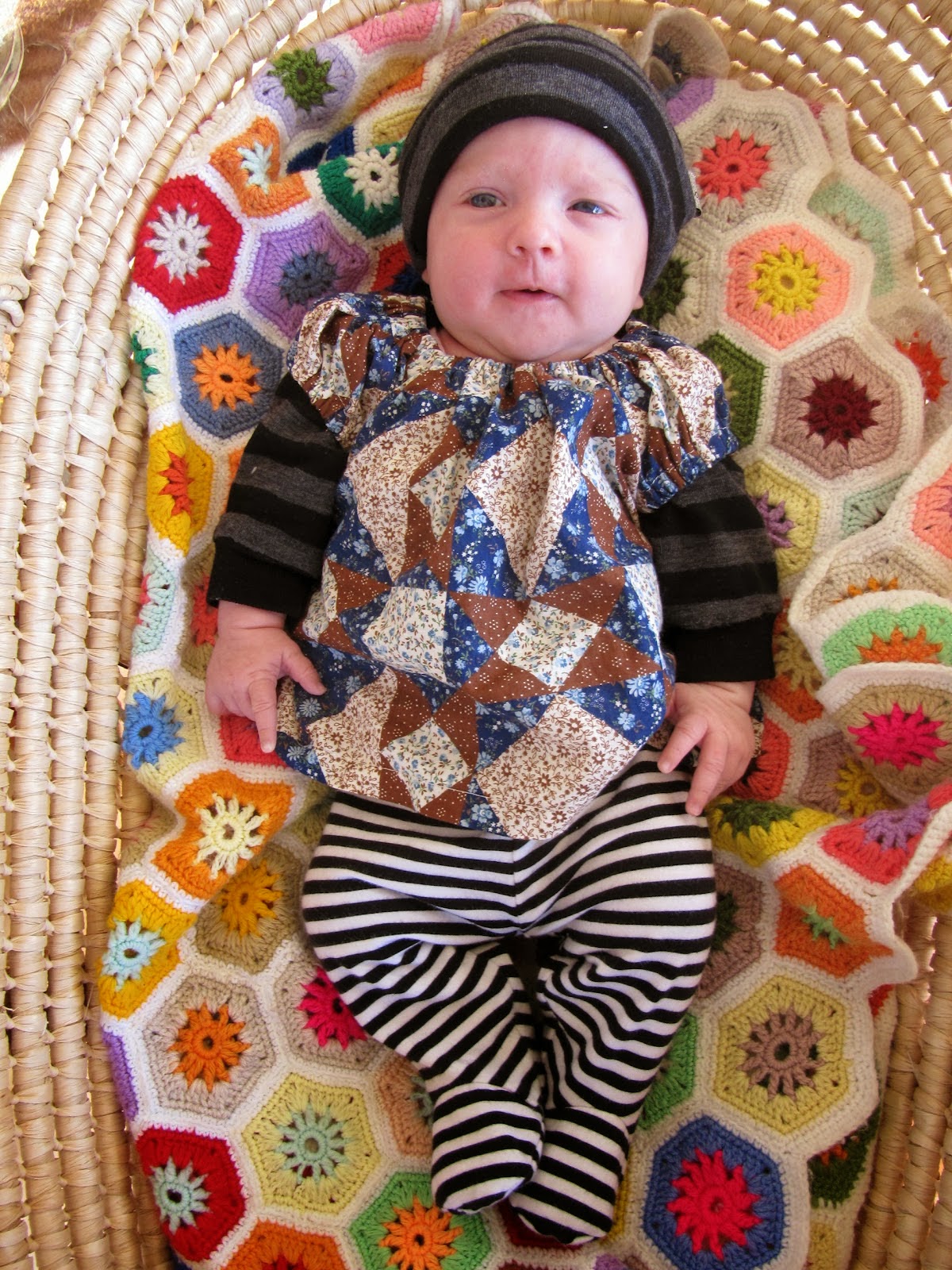 To be honest, the whole pink and blue notion is a fairly contemporary one; in fact its a 20th century conception.  Prior to the 20th, the colors were reversed.  Pink was thought more fit for boys as it implied energy and activity, whereas blue was considered suited for girls as it was thought to be calm, quiet and retiring.

So, socially the notion of gender neutral clothing has already made inroads into our culture at the earliest possible point. The fact that this is so implies some significant differences to come in how our now infant people will view regard their own clothes when they get to choose them themselves from what we now regard as normal.

For many years now there have been innovative designers who have probed and prodded these ideas, sometimes to great effect and success, sometimes not; but experiments of all kinds are needed to make this happen in some kind of real world terms. 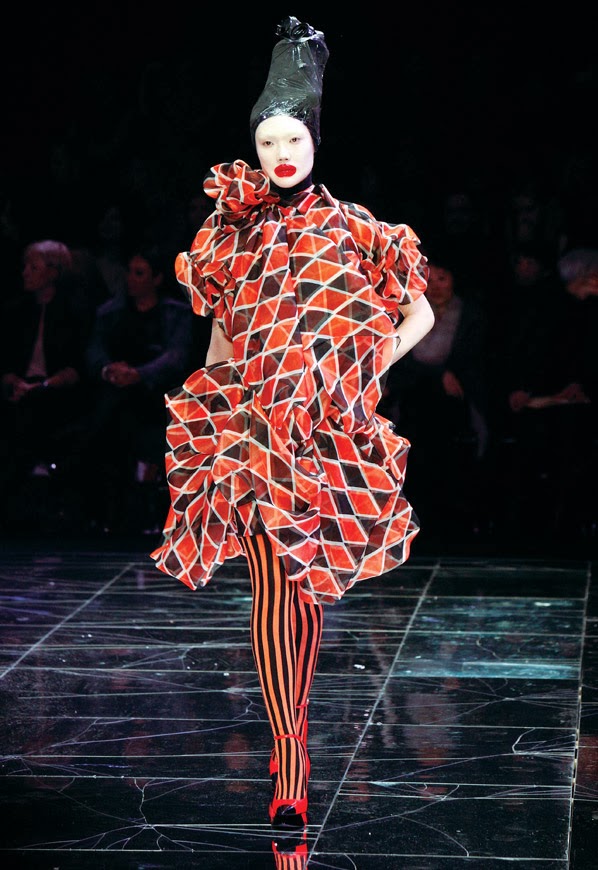 Male models have been sent down the runways in a deliberate attempt to challenge and ultimately break apart our long held notions of right and wrong about human attire vis a vis one's sex.  And female models have for many years trod the runways in menswear inspired looks that are often almost indistinguishable from the men's clothing they mimic. 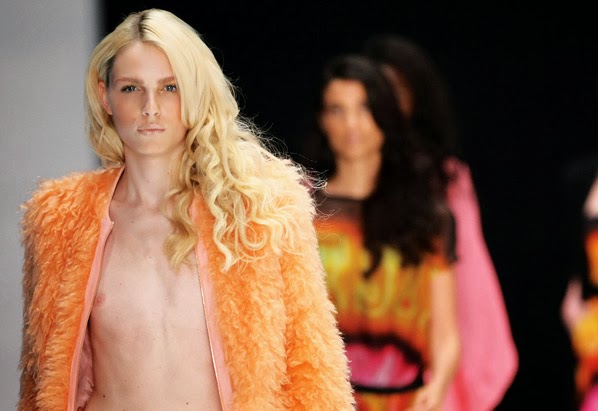 But no matter how you feel looking at this young man, in his wig and fake fur jacket, you cannot deny he is beautiful (according to our current ideals), however much his appearance might make you uncomfortable in some non-verbal way.

So, designers continue to explore the boundaries of this subject, creating looks that in gross or subtle ways ask us to re-think who we are and how we feel about ourselves. 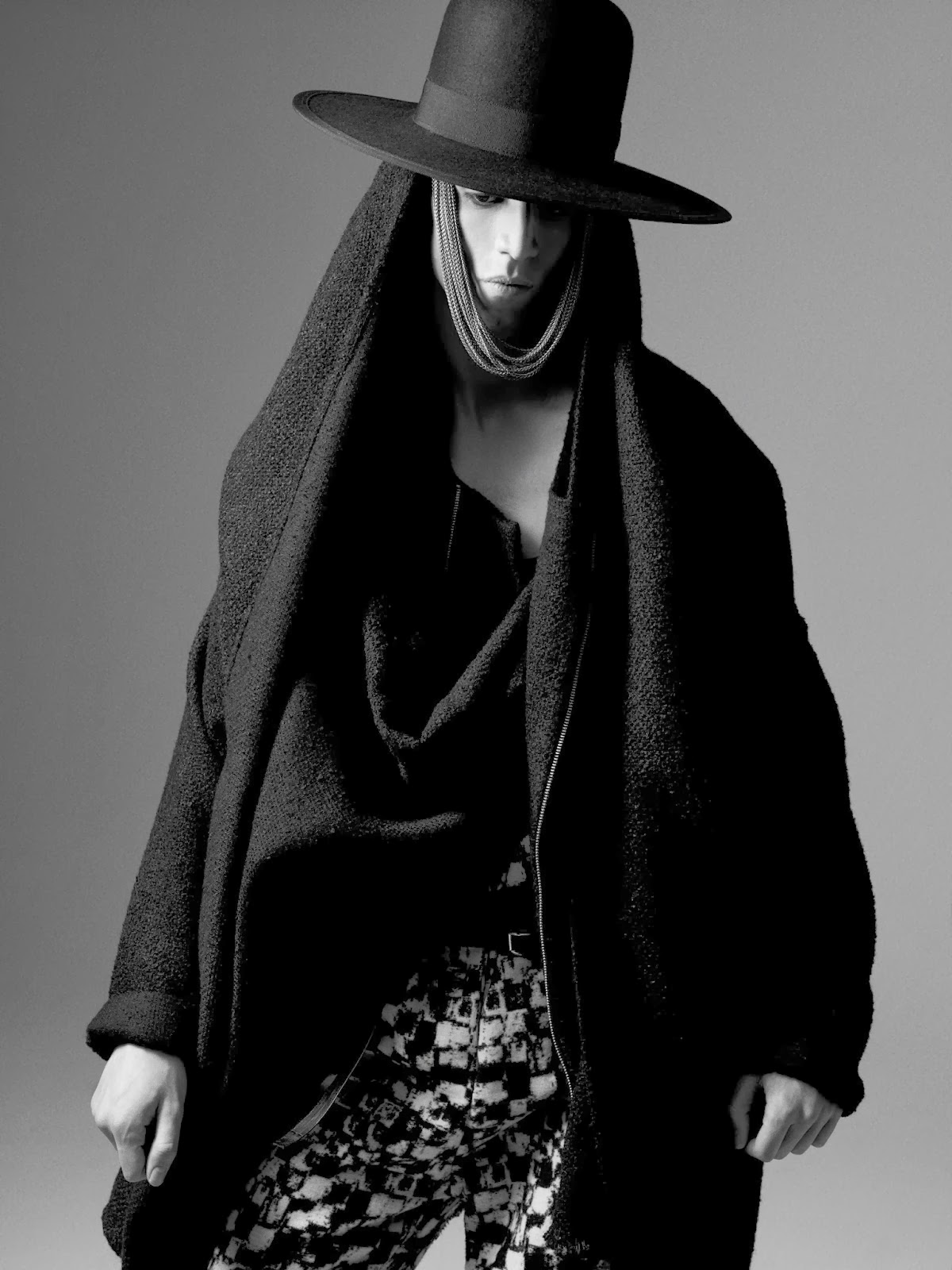 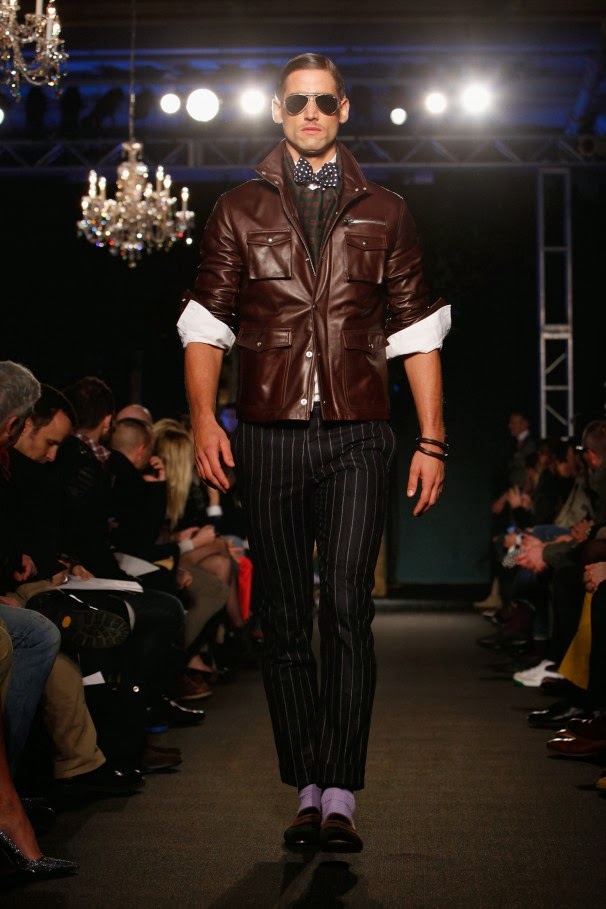 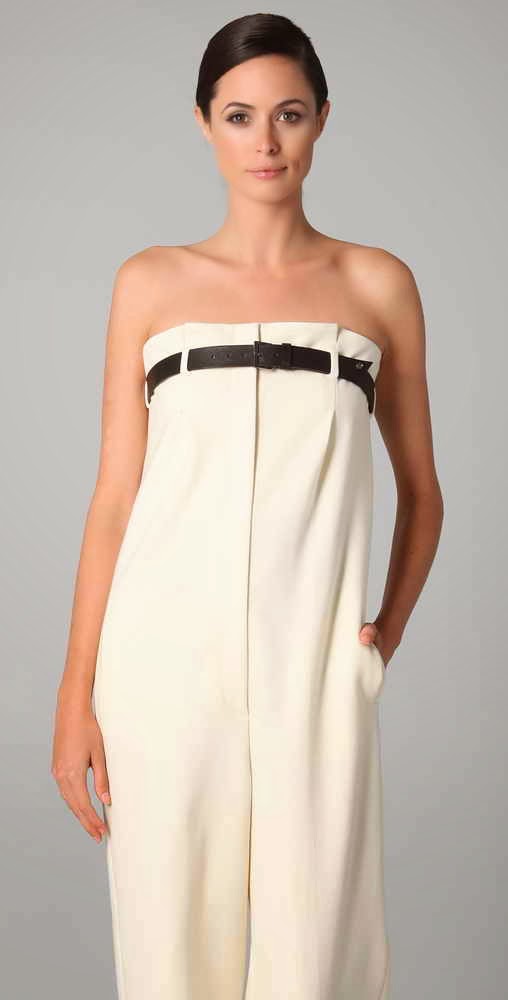 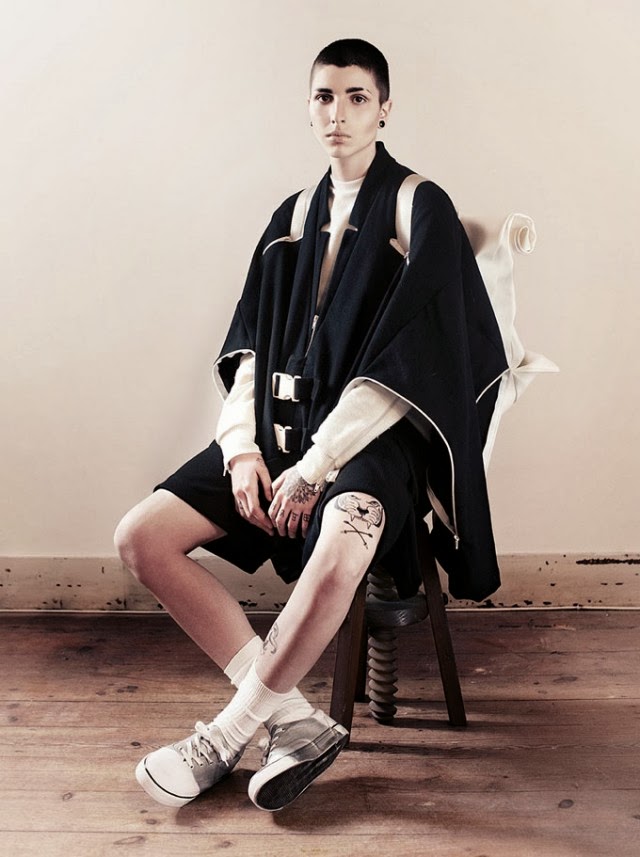 Along the way, we are discovering new shapes, patterns and methods of combining things that serve to expand the huge, varied language that is Human Attire.  And also it is giving us further opportunity to look inward to ourselves,  and outward towards our own future, as our world becomes more and more in reality, the global village that we heard about decades ago.
Posted by Paul G. Ellis at 7:15 PM