Revolutionaries have abounded in the fairly short history of couture.  And few have been as much so as Paul Poiret.  The number of innovations he brought to bear, not only in terms of what he designed, but how he presented them, resonate today and are mostly part and parcel of doing the business of fashion as we know it now. 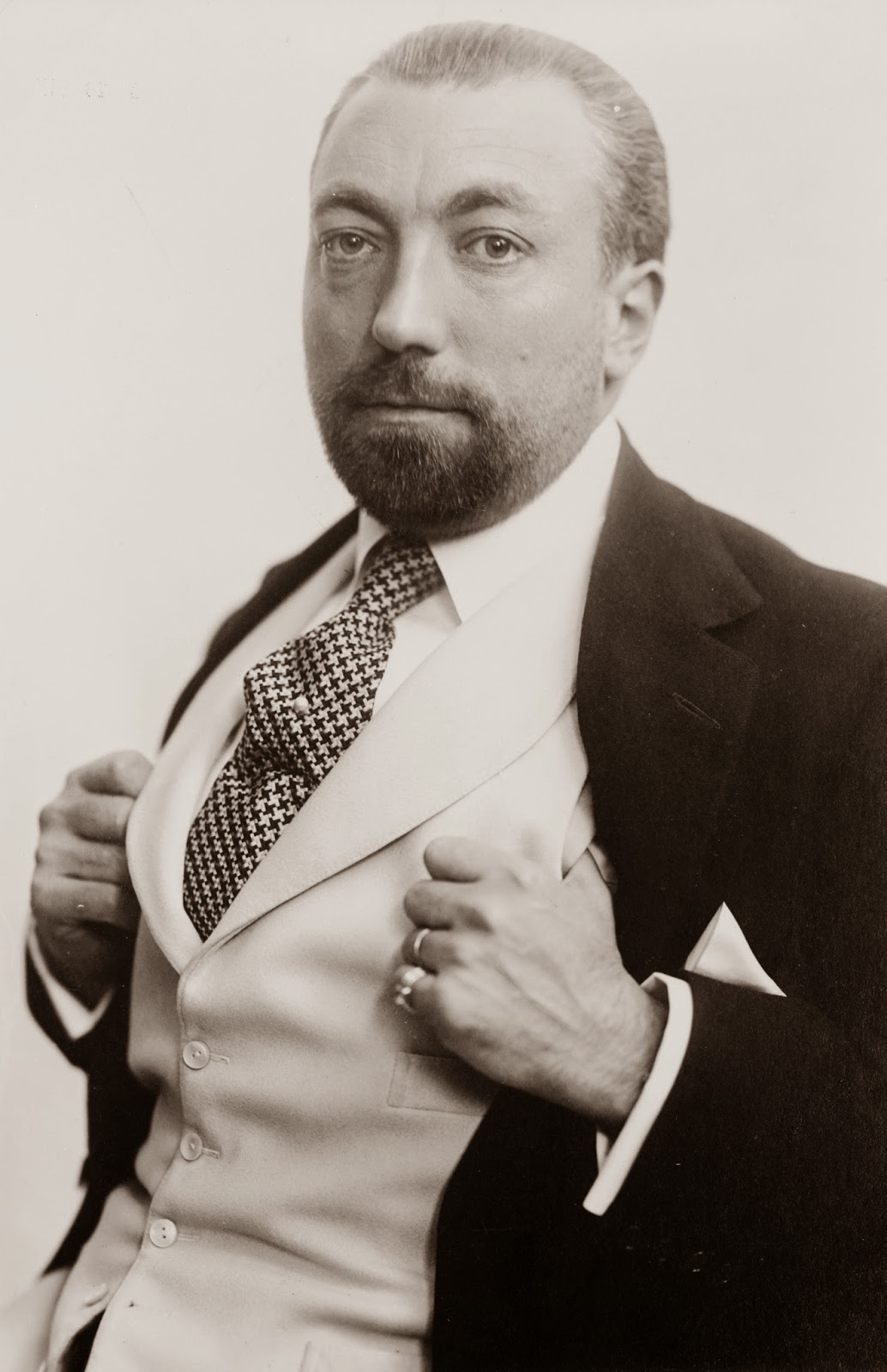 First and most importantly, through his love of Orientalia of all sorts he introduced a new manner of dressing that released women from the spine curving, waist crushing corsets that had been the mode.  Suddenly the waist returned to a level unseen since the 1810s.  And clothes fell in loose folds, with no restrictions in the midsection.  Of course corsets didn't actually disappear, but they changed radically, to a shape much closer to a human norm; and many women did in fact go without entirely. 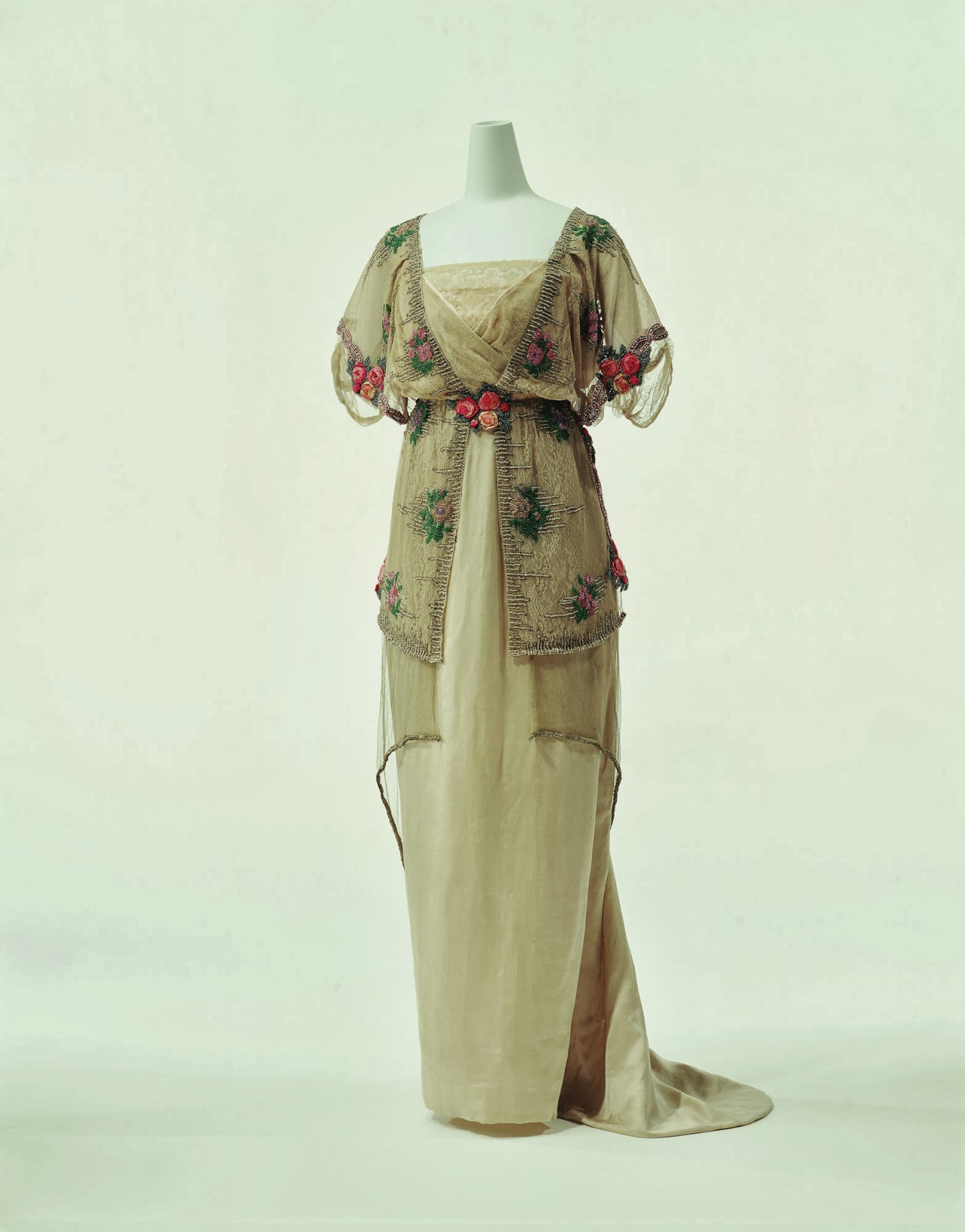 He also engaged the services, and encouraged the careers of young artists, like Georges Lepape (whose illustration of Poiret's work is below), and Paul Iribe; both of whom drew fashion illustrations for expensive, and exclusive folios of current design work from the house.  This began a collaboration with artists and photographers that is an intrinsic part of how fashion works today. 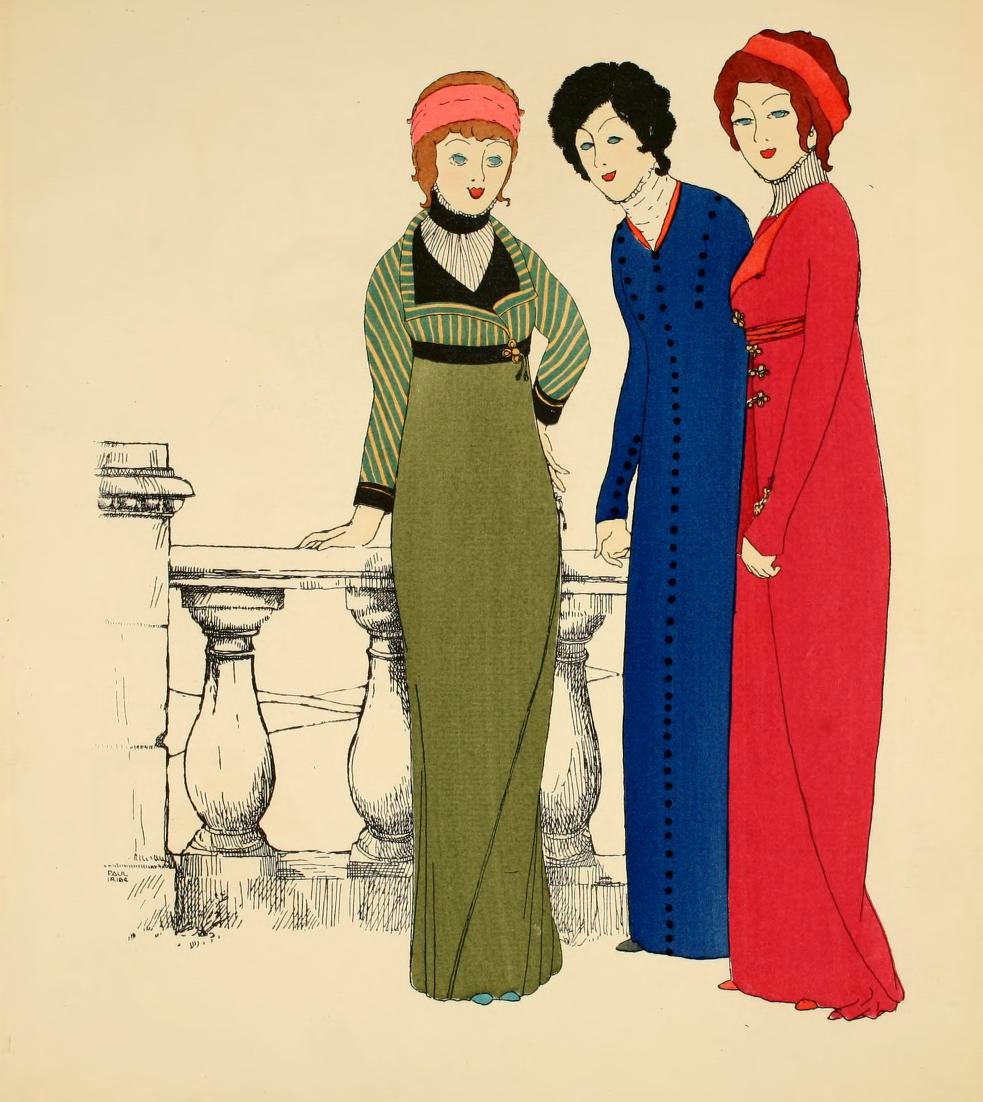 He was also a master showman, and created lavish parties which became much talked of and recorded; which only furthered his fame and influence.  The most extraordinary of these was the 1002nd Night party, held in the gardens of his home.  All the guests were costumed by him, and this photograph is of the costume he himself wore, along with that worn by his wife and chief muse Denise.  No expense was deemed too much, including covering the garden paths in carpets, having caged birds and monkeys, and peacocks roaming about. 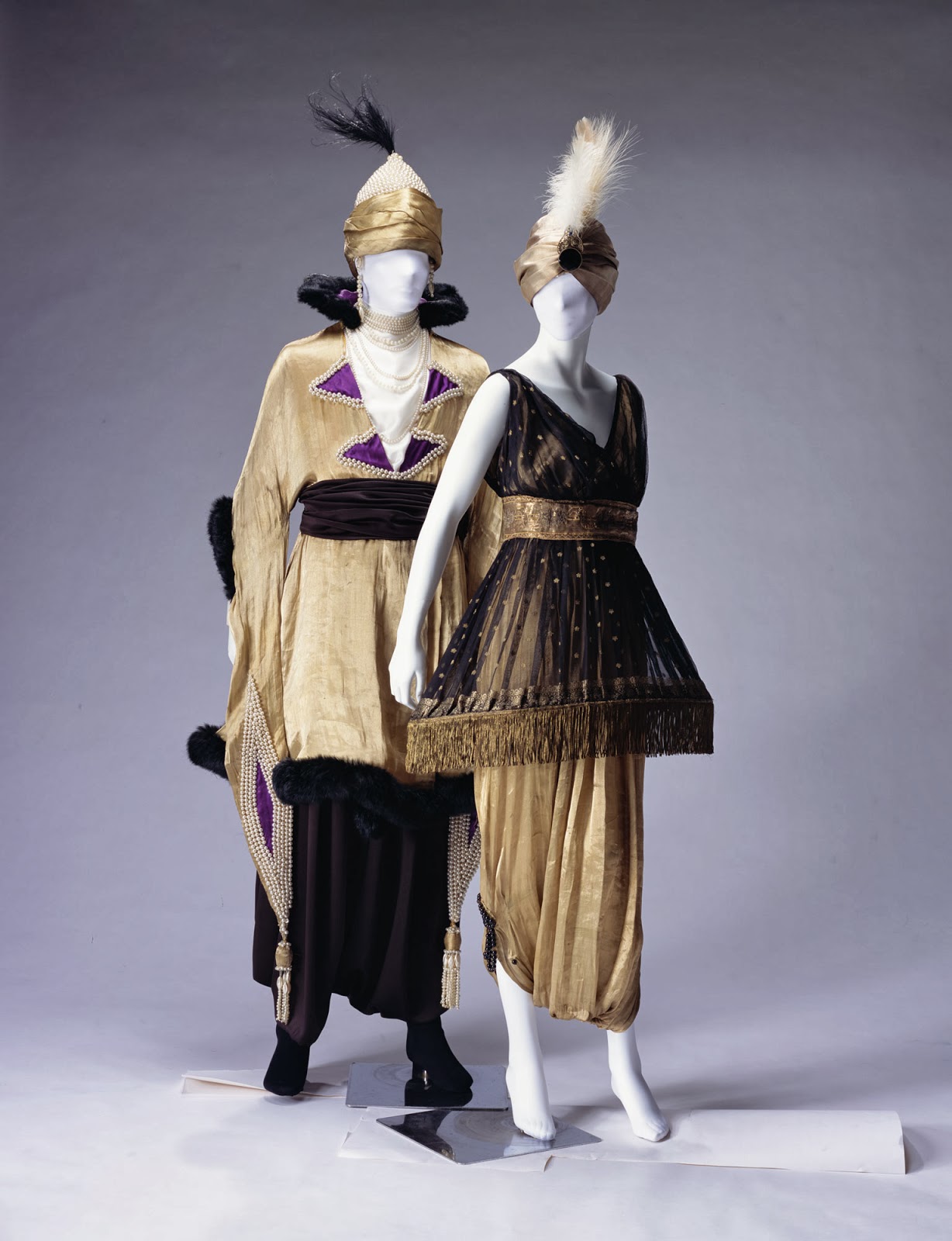 Keeping his eye always on modernity, he used photography extensively, and was one of the first to show his designs on models moving through their day, These images were shot inside his home in Paris, which he used regularly as a setting.  He even did film of his models walking through his gardens, wearing his clothes, so that patrons could see how the clothes moved in real time. 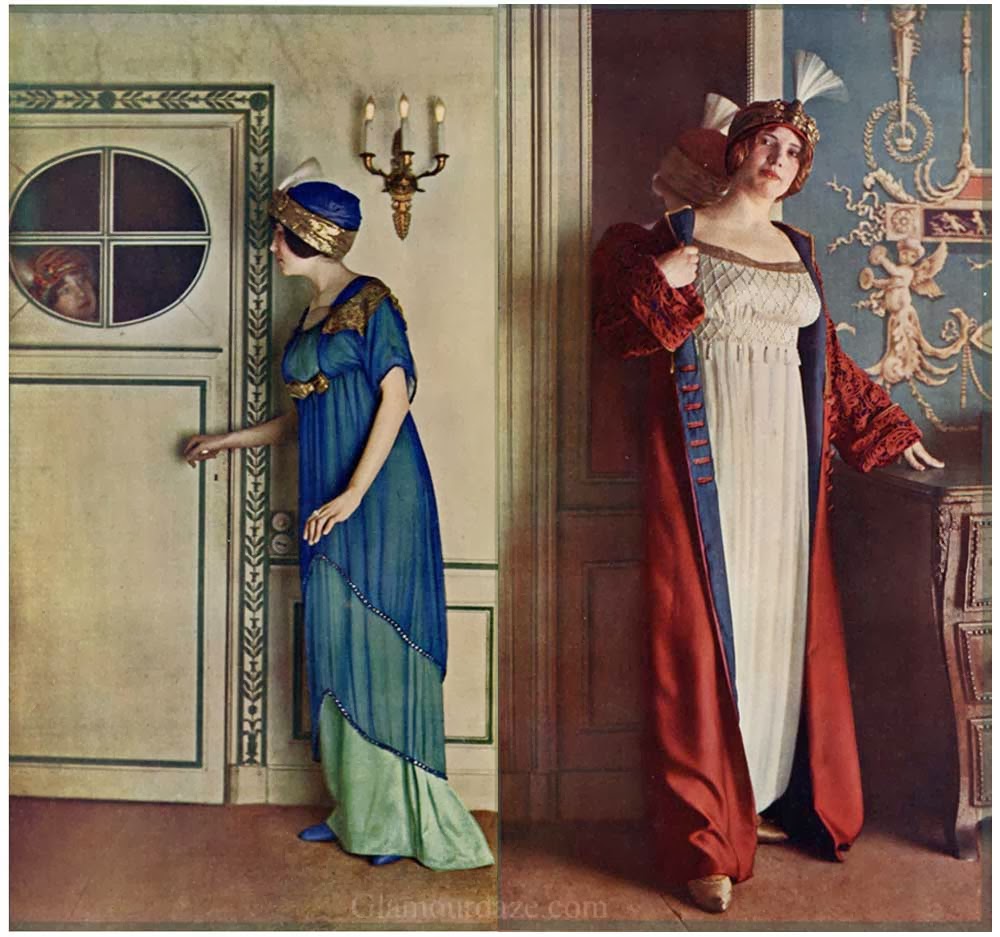 He was also the first couturier to produce fragrances attached to his house, and eventually created, with the design assistance of his daughters Rosine and Martine, businesses that made textiles for home use, furniture and home accessories.
But for me, it will always be his remarkable critical eye, that never made something lavish simply for its own sake.  Everything was integral, and if it didn't contribute actively to the harmony of the design, it was rejected. Drama was fine, and in fact, actively sought, but rococo abundance was not. 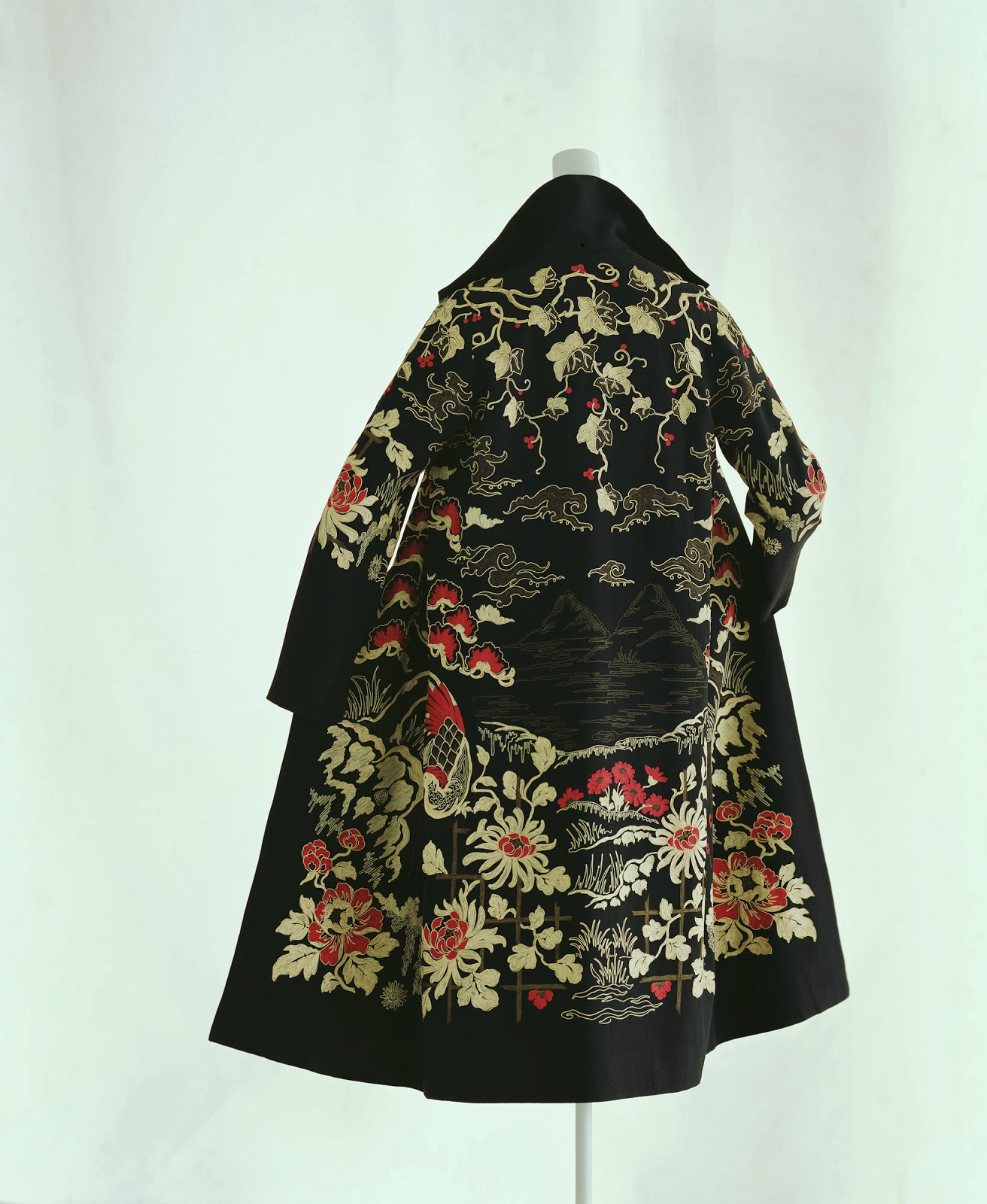 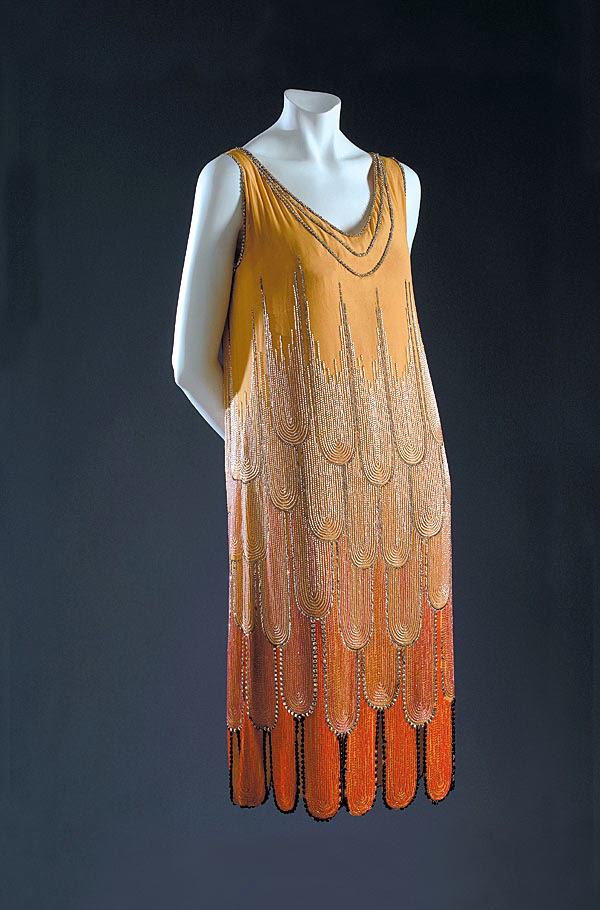 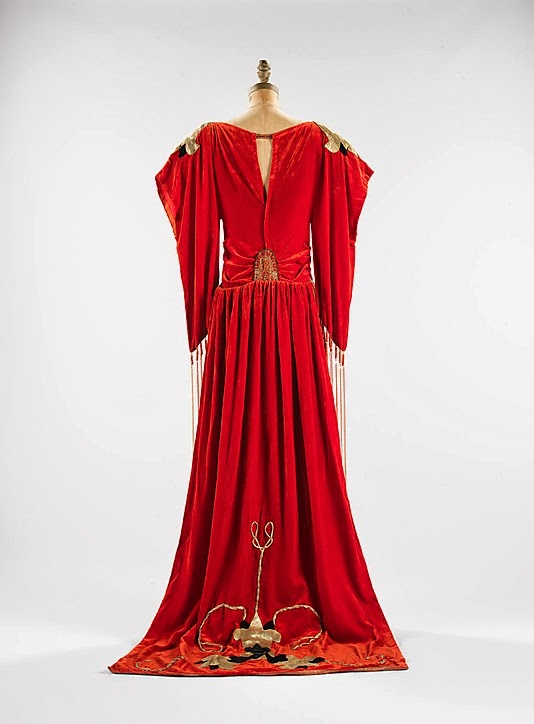 This final image, above, is called Robe Sabat, and is as fine an exemplar of the Poiret aesthetic as I could imagine. It is grand, brilliantly colored, expertly constructed, and given an operatic dash, without going too far.  He is for me, one of my first and best inspirations. And his work helped pave the way for decades of other visionaries who conceive entirely new ways of dressing the human form.  It remains for us to find and chivvy along these young unknown people, for who knows what wonders they make bring to light?