Blythe House, The V&A, and Me: Part One

So, clearly, when I said I was going to continue to post here, sporadically during my long UK adventure, I lied.  Unintentionally, but that's a fact.  Now that I have that admission out of the way, lets move on, shall we?
Some of you know that I had managed to get an appointment at the Clothworker's Centre at Blythe House in Kensington, London.  Blythe house is the location where the Victoria and Albert Museum keeps its over 100,000 pieces of textiles, and garments, currently in their collection, when items are not on display, or on loan to other facilities.  Its also where new items get taken through the conservation process, cataloged, photographed, and stored.
Located in a quiet section of Kensington, Blythe house itself is a vast Victorian building, initially built to house a Postal facility.  Now its home not only to the textile collection but also to the V&A's collection of furniture. 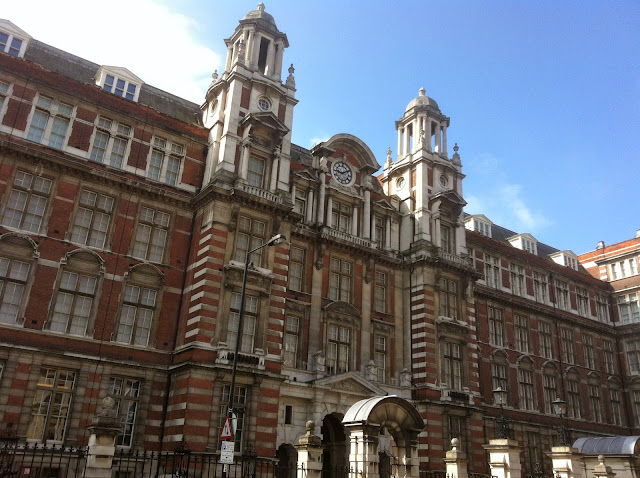 Approaching the building, I actually felt a might daunted by the huge iron gate.  The sign on the gate said, "By Appointment Only, Buzz for Entry", so, I buzzed.  Walking through the forecourt, and then under an open space that was clearly originally for carriages to stop, I turned left, went up some stairs, and into the building to the reception area.  To get there, I had to walk past some workrooms, where I could see rows, and stacks of boxes, filled with pieces in storage, or being readied for conservation work. 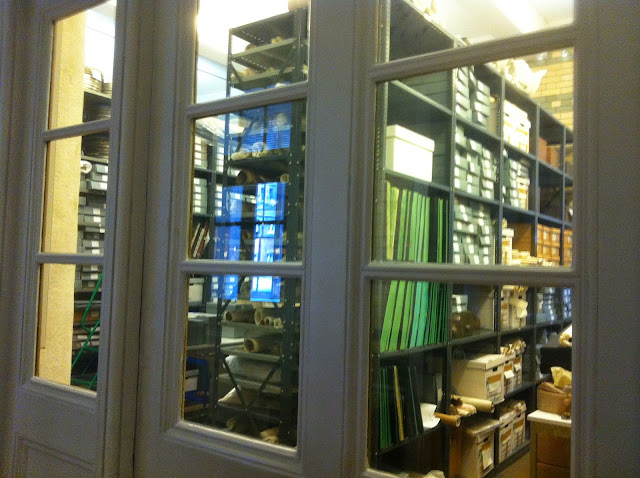 At reception, I was met by a delightful silver bearded fellow who gave me the run down on how things worked, gave me my ID wrist band, and told me that there would be a short wait before the worker I was assigned would be with me.
Shortly, a young woman came to me, and introduced herself as Sarah.  She would be working with me during my appointment time.  She took me to a lift, and up we went to the 3rd floor; where the bulk of the collection is kept.  She guided me to a large room, about 20 by 40 feet in size, with a number of long tables, each covered in white tyvek.  And on each one of these tables, laying before me like treasures, were the objects (as they are referred to in museum parlance) I had requested to see. 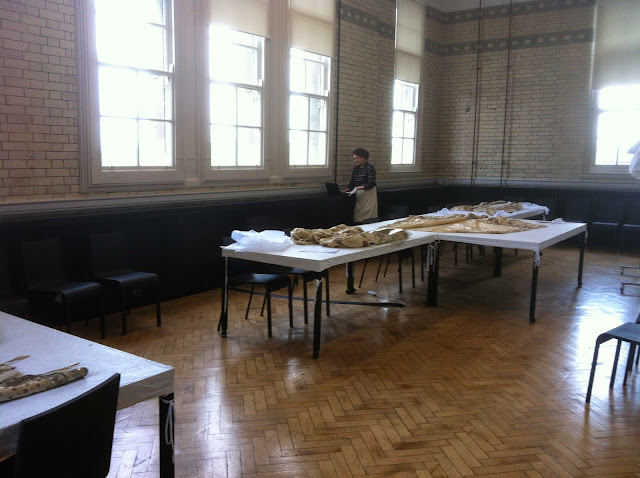 I know I have some facility with language, but I don't know really if I can convey accurately the depth of what I felt, suddenly being literally in arms reach of some garments that I had admired, and studied in photographs for many years.  It was something akin to being in the presence of a painting one has often seen.  But there was something more.  That something more was the instant knowledge that each of these things had had a life, an owner, and a history buried within their fibers, and folds.
Sarah and I had already struck up conversation, and when she found out that I had been at this study for as long as I had, she brightened, since she has a museum background, but not a clothing and textile one, so she hoped to learn from me, as much as I hoped to learn myself.  That was an unexpected, and marvelous addition to the whole experience.
The first object was a mantua dated from 174-45.  This astonishing piece had clearly been kept away from light over its long 275 year life.  The silk material was still quite sturdy, according to Sarah, and the extensive silk embroideries were as brilliant as the day they had been sewn.  Sarah gave me a large square piece of perspex, and a jeweler's loupe, so that I could look closely at any part of the mantua without touching it. 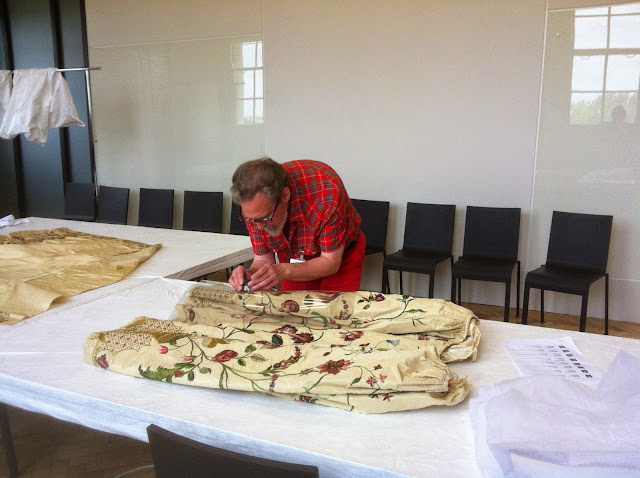 The underskirt is decorated over its entire surface with embroidery.  The hemline is a complex trellis work design, interrupted with urns from which spout the abundant leaves and flowers that decorate the majority of the skirt.  The trellis design and urns are done entirely in gold metal embroideries, that have survived time, nearly without damage.  Using the loupe, I was able to see individual stitches, holding the precious metal strip and purl to the surface.  The complexity, and precision of the work was actually breathtaking. I found that I had been unconsciously holding my breath, looking at this. 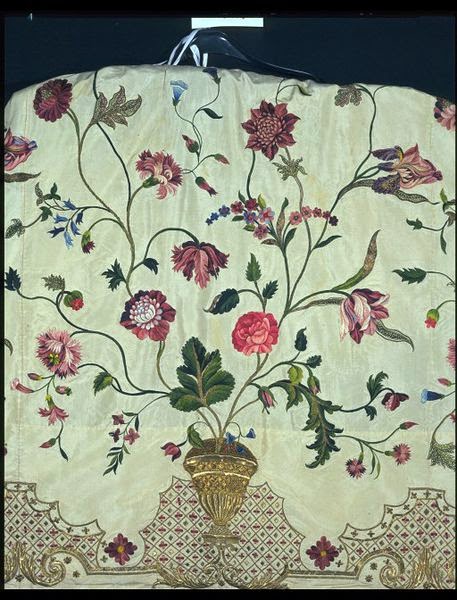 The gown part of the ensemble was embroidered to match, with the same repeating trellis pattern and rampant flowers.  At this decade, the 1740s, nearly the entire underskirt was in view, as the gown's overskirt would be pulled up and back, creating a tail with only a small amount of the overskirt hanging at the hipline in front.  Embroidery designs during this time took such things into account, so that the small front pieces would be maximally decorated. 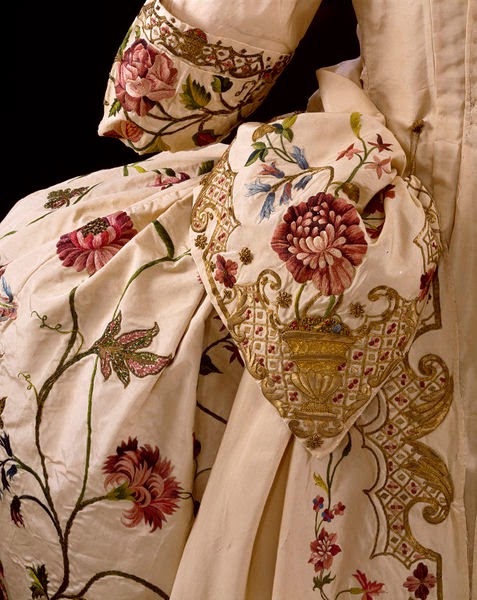 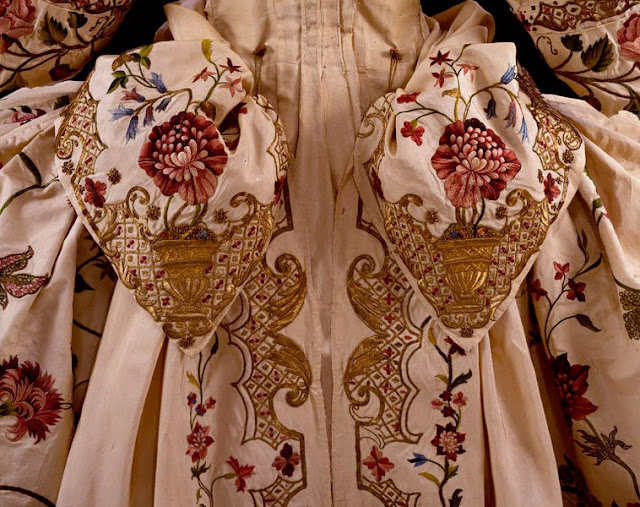 During my examination of the gown, I discovered something that I asked Sarah about.  There had been some repair done to replace a missing section in the gown hem area.  Whenever it had been done the width of the embroidery pattern hadn't been taken into account, so the pattern's rhythm was thrown off.  Sarah checked their records, and found no mention of it, so in my own small way, I added to their stored knowledge of one piece of history; which was yet another surprising extra to my appointment.
Tomorrow, I will continue this story, moving on to other items I saw.  But suffice it that I was already utterly gobsmacked by what I was experiencing, and now, nearly two weeks later, I'm still in awe. 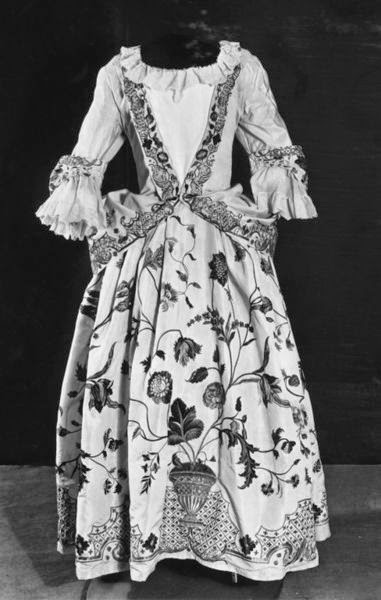 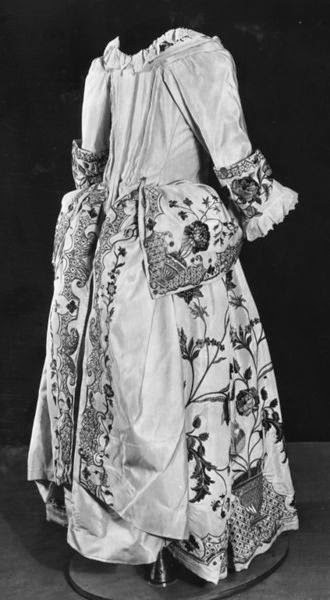 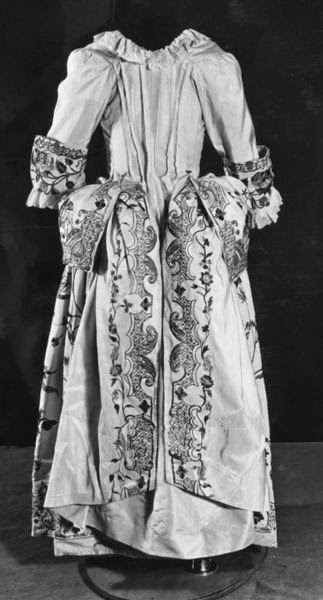 Side note: direct photography of garments was not allowed, so any detail shots, and full images are from from the V&A archives themselves.