Before I wend my way to the UK for three weeks a somewhat longer scatter for you all.  I will be continuing to post, but its likely to be spotty to say the least.  So, with that said, onward we go! 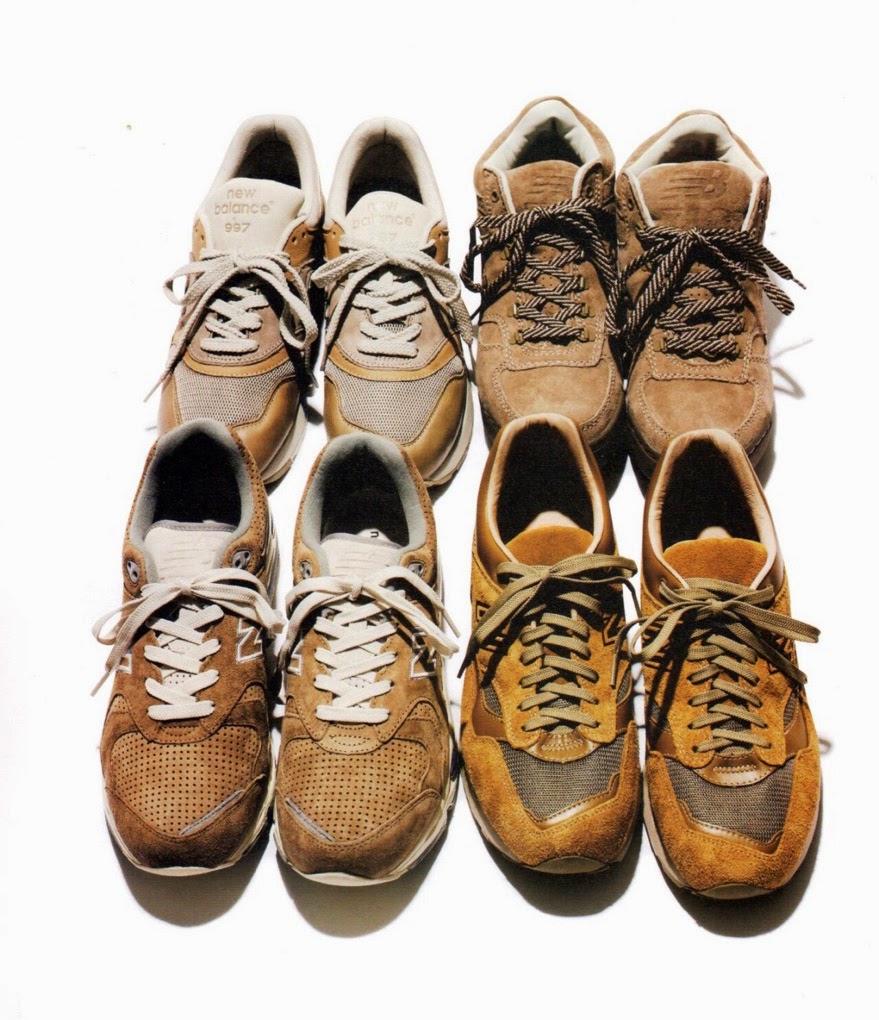 A few days back I did a post that was about beginning to establish a syntax for Attire.  This image really reminds me of that post and what it was for.  Here we have 4 pairs of shoes.  At that level they are in the same Family, footwear.  The the Cluster gets defined, sport shoes.  As I said before the Cluster level defines purpose for an apparel item.  The we get to the Set level, and there is where the divisions between these very similar shoes emerge.  As you continue to add more defining terms, high top versus low, patterned laces versus plain, solid color or not, mesh parts or not, then we are able at last to get to the Attire word itself.  Considering these sport shoes, you would need three or more Set definers to get to the point where you accurately describe one pair over another. 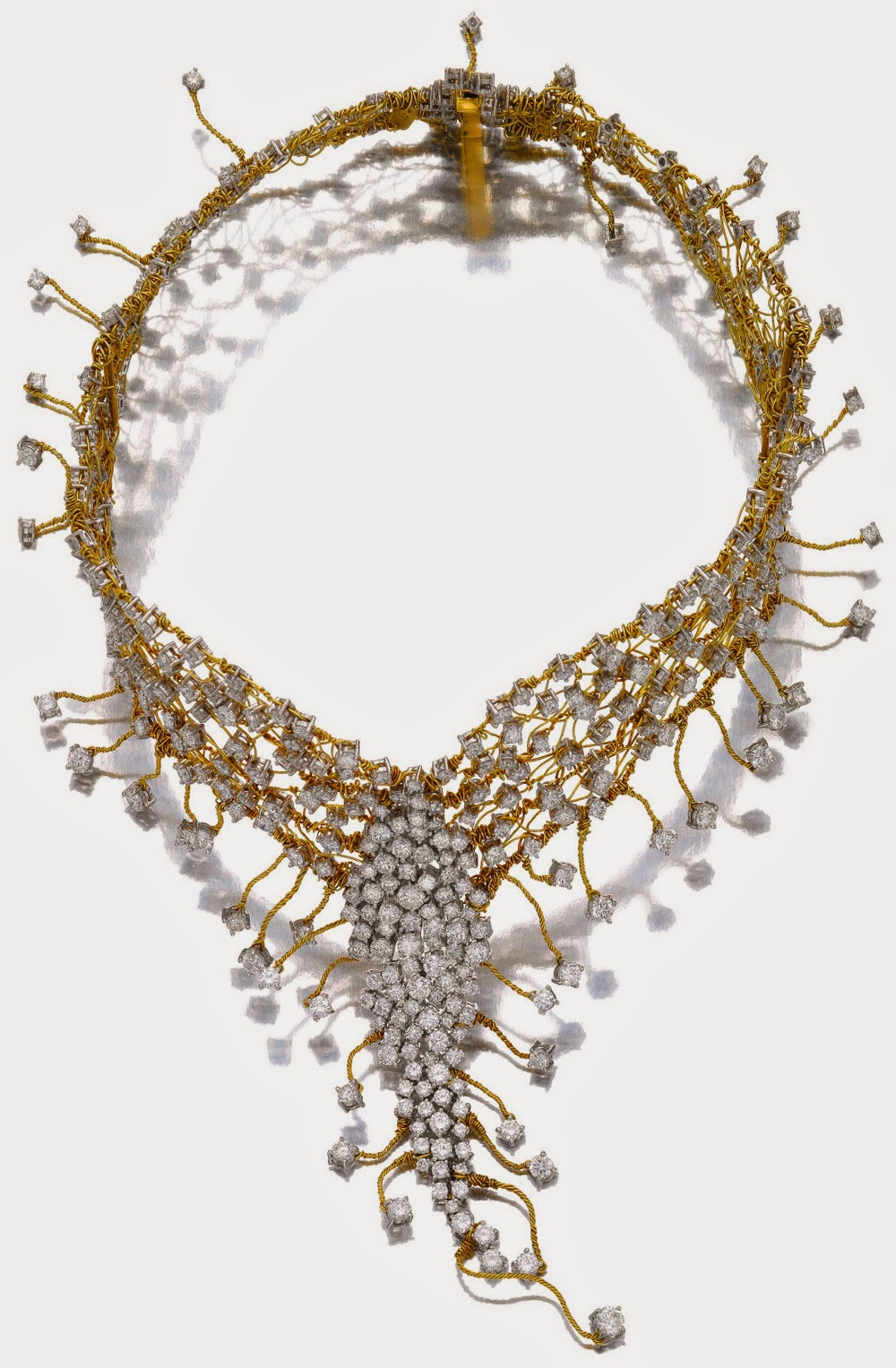 One of the things that really establishes our current cultures aesthetic is a willingness to explore traditional materials in an entirely new way.  This gold wire and diamond choker is a perfect exemplar of that.  In an organic way the diamonds are treated almost as if they were flower buds.  And the wire wrapping is deliberately rough and uneven.  Though it references the Art Nouveau to a degree, the level of randomness is far beyond what would've existed in then.  Its nearly as though this was a DIY project by someone with pots and pots of money.  But the final point is that this kind of manipulation of materials has never existed before.  Only in our current society is this level of expressive freedom surfacing. 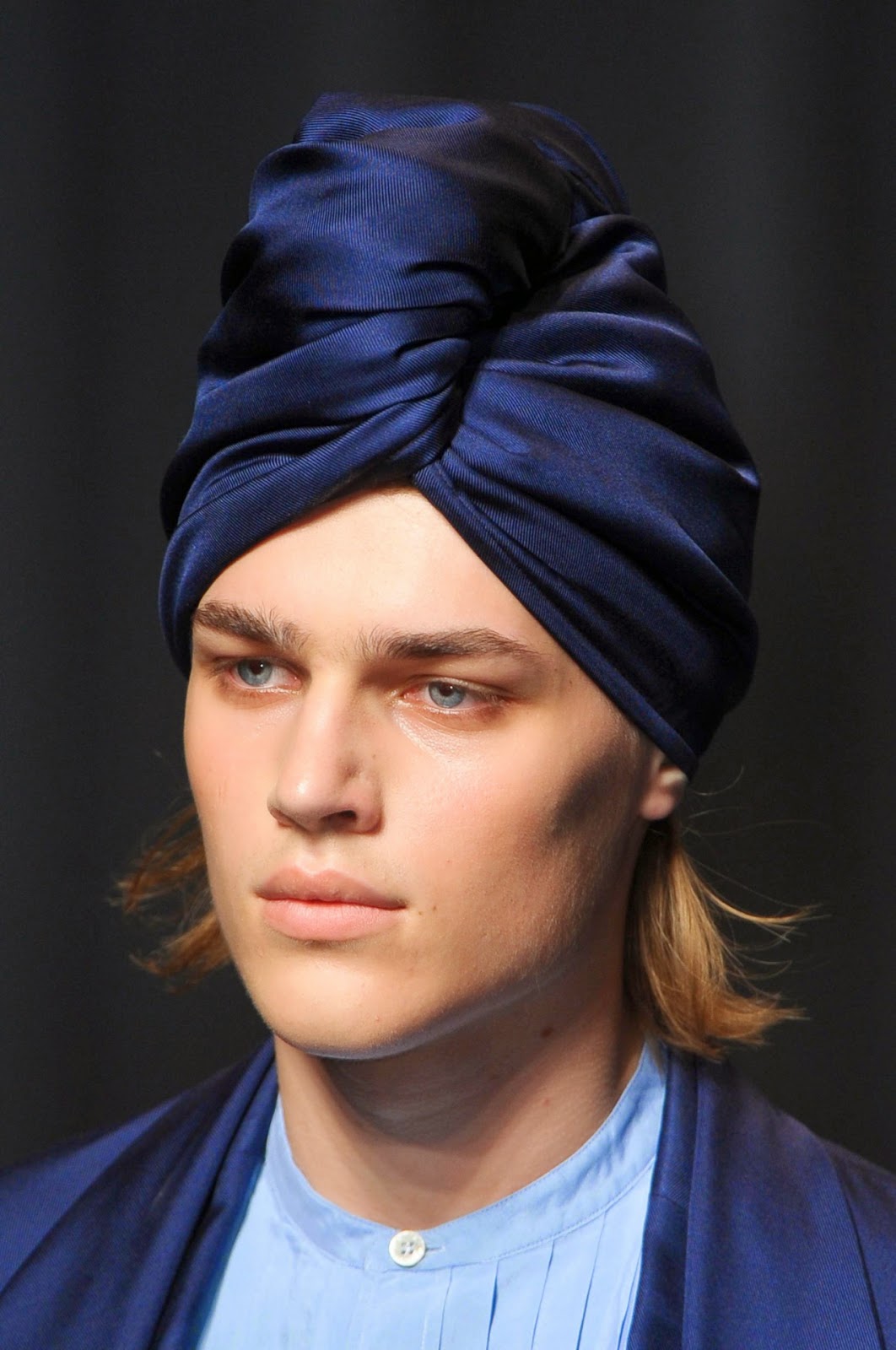 I've certainly posted about people in turbans before. And I'm all in favor of them.  What makes this iteration worthy to me is its shape and proportion.  Its a slightly different take on the concept. Its like the classic towel dry twist that people with long hair use after showering.  The fabric's sheen and the depth of the blue add a sense of seriousness to it, and the height without side volume could work for a number of folks.  Try and imagine yourself in this, or one similar. 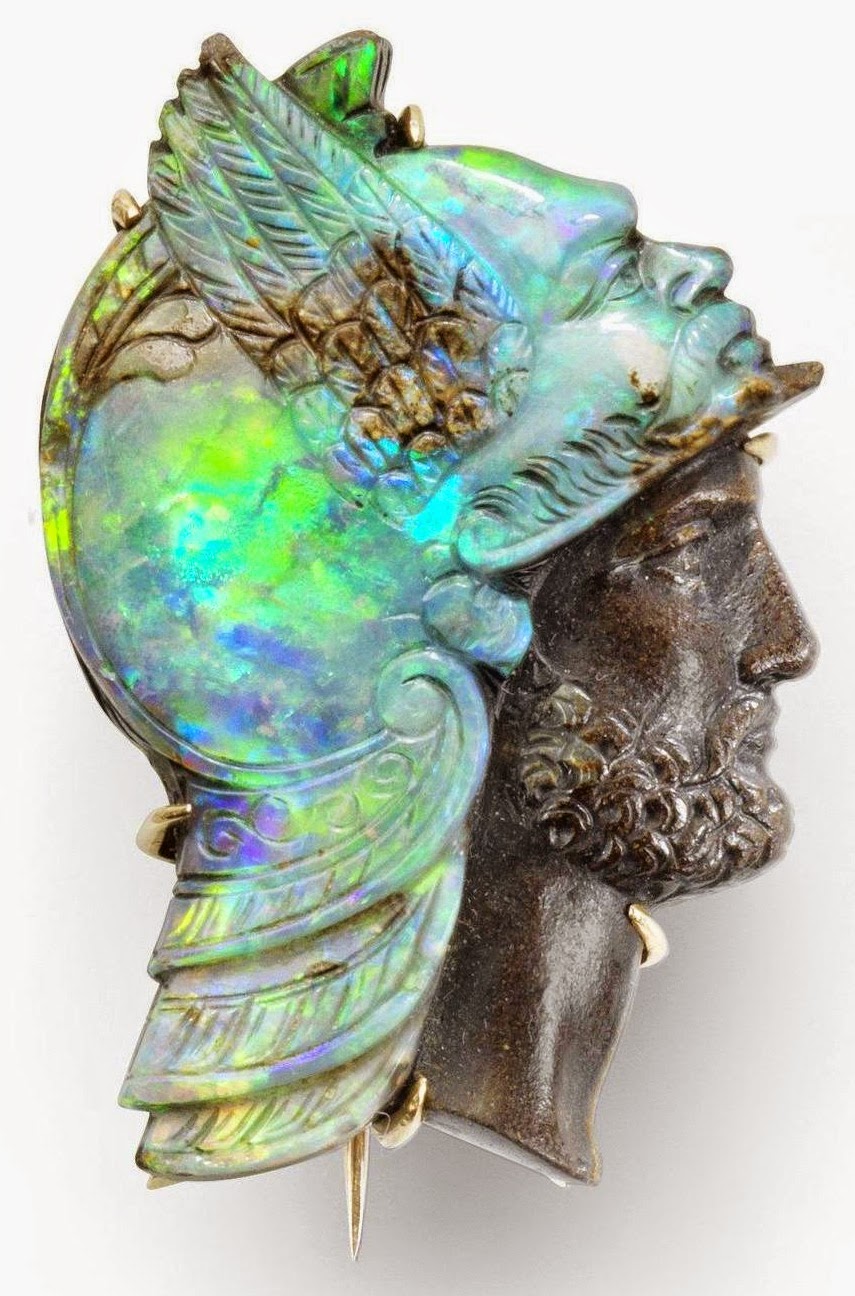 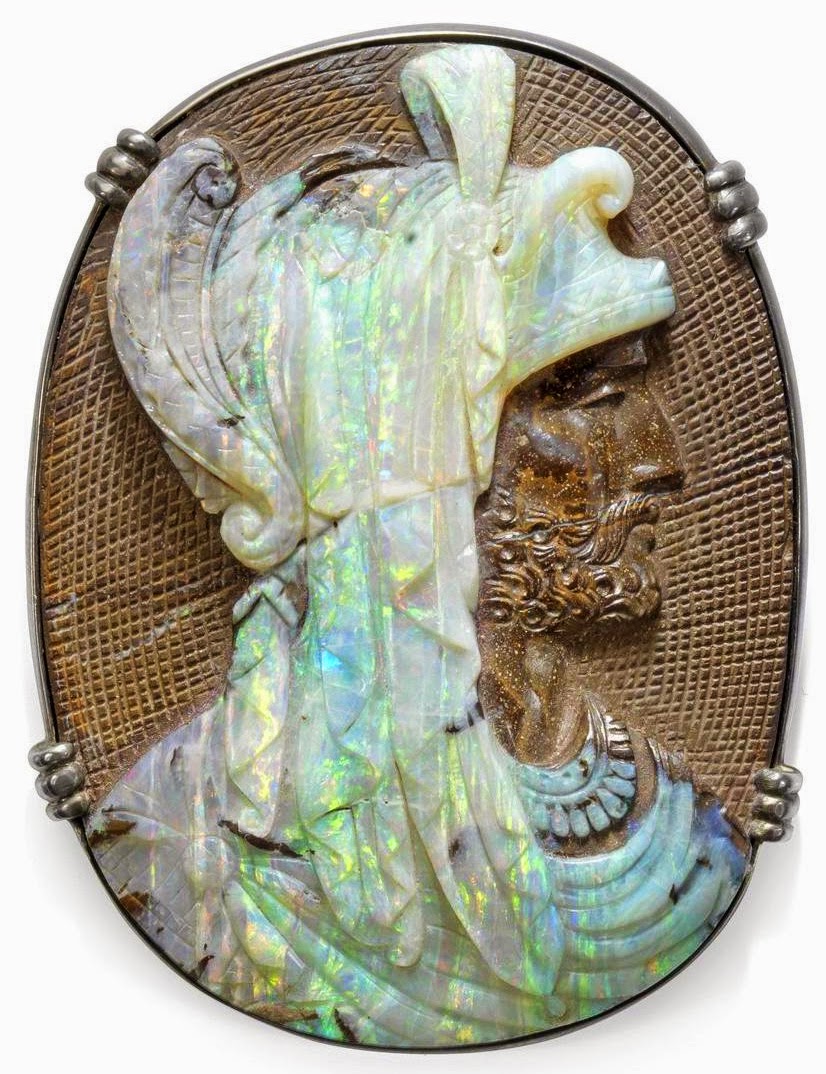 In the latter 19th century, jewelry maker Wilhelm Schmidt created a new method of doing a cameos.  He used the matrix stone, as well as the opal on it to create a more layered image, by carving the matrix, so that the faces differentiated from the draping, helmets, and folds that were rendered out of the opal.  These are wonderful. Nuff said. 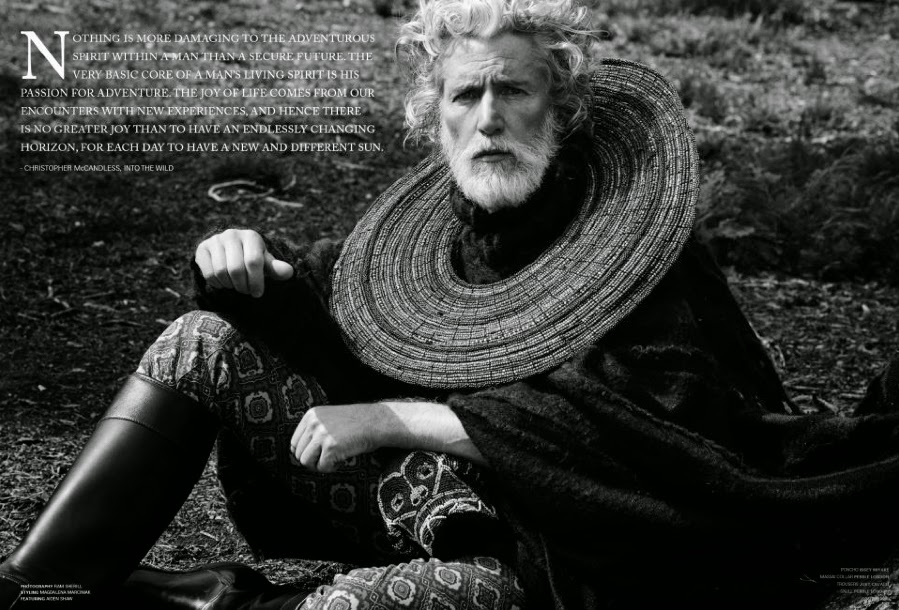 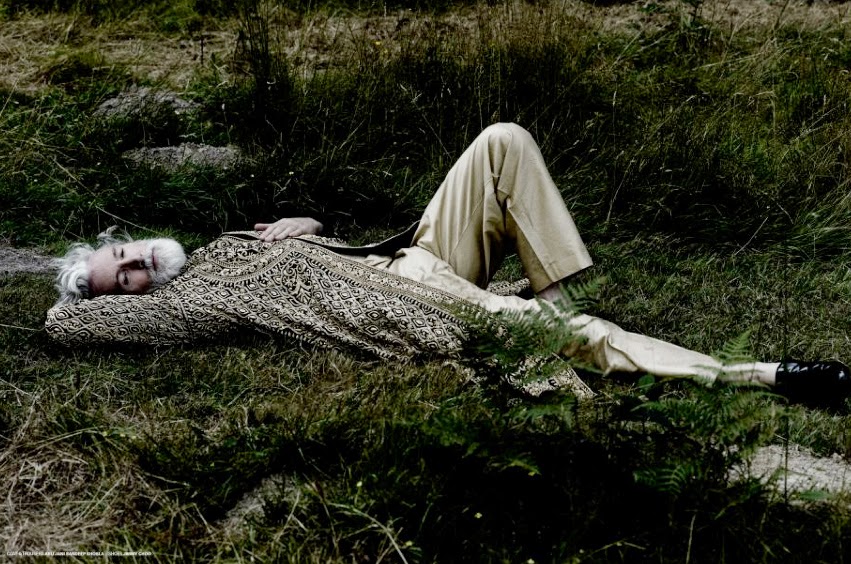 After a career in porn, and as a high end rent boy, Aiden Shaw has remade himself into very nearly the poster man for older guys who want to be stylish.  He's working regularly now as a model for print for all sorts of magazines and fashion houses.  These two images are from a shoot for Drama magazine.  He can carry off the most wildly extravagant looks with effortlessness, and I suspect that if he keeps at this, he will become the male equivalent of Carmen Dell' Orefice.  Its long past time that models, of any gender, or none, were allowed to be over 40.    And I WANT that embroidered coat with a fierce heat. 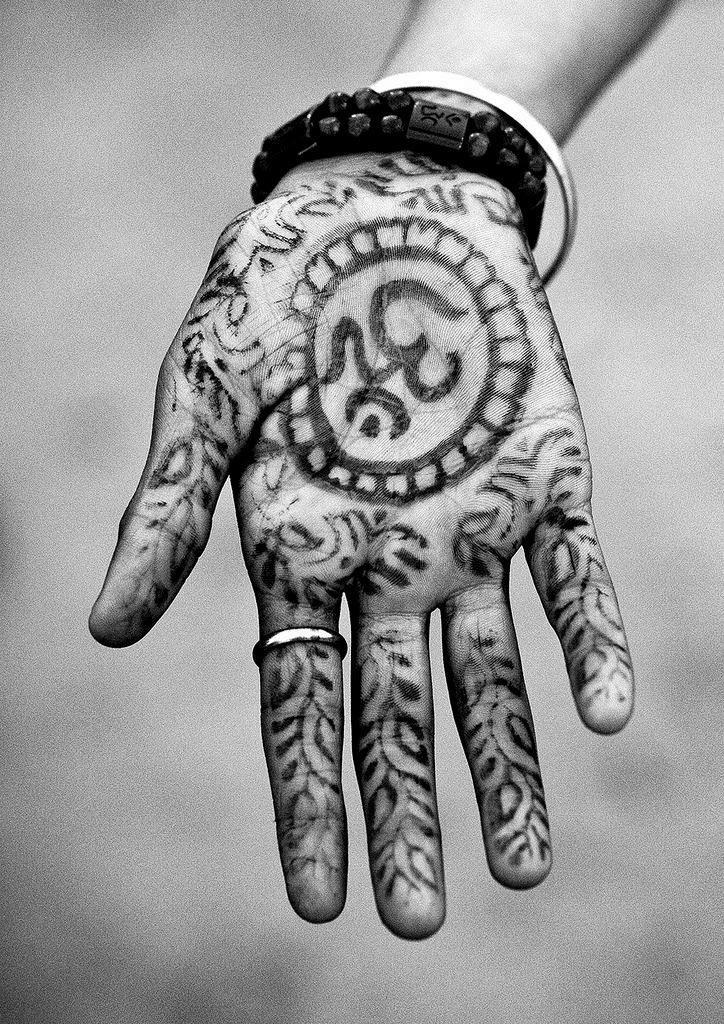 I love that we still indulge in this.  As one of the very first things we did to adorn ourselves, painting onto our skin takes us past all our history into the beginnings of our species.  The juice of berries, the wet soil of the ground, anything that could color us or stain us we used.  And we still do.  I love that this kind of continuity exists within our often overly technologized world. 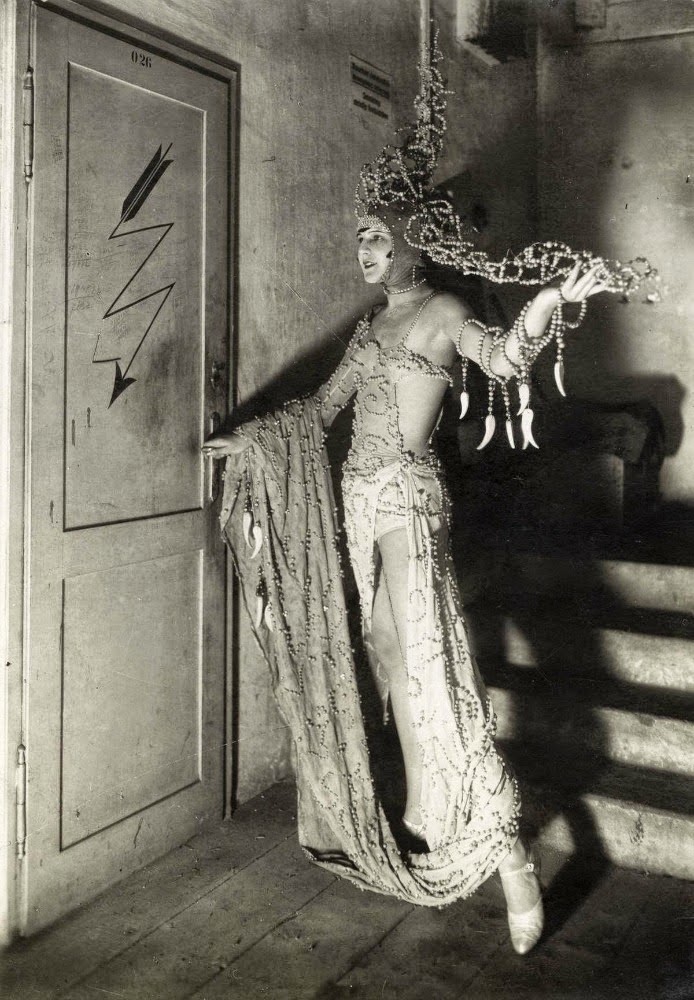 A backstage shot of a Berlin showgirl costumed for a review called Alles Aus Liebe in 1928.  These dames had to have strong arms, and good necks to be able to hold these headdresses up, and great posture so as to not tumble down the stairs in their heels.  But this is also interesting for the glimpse it gives of how our vision of beauty has shifted, and how it was different in Europe from the USA. 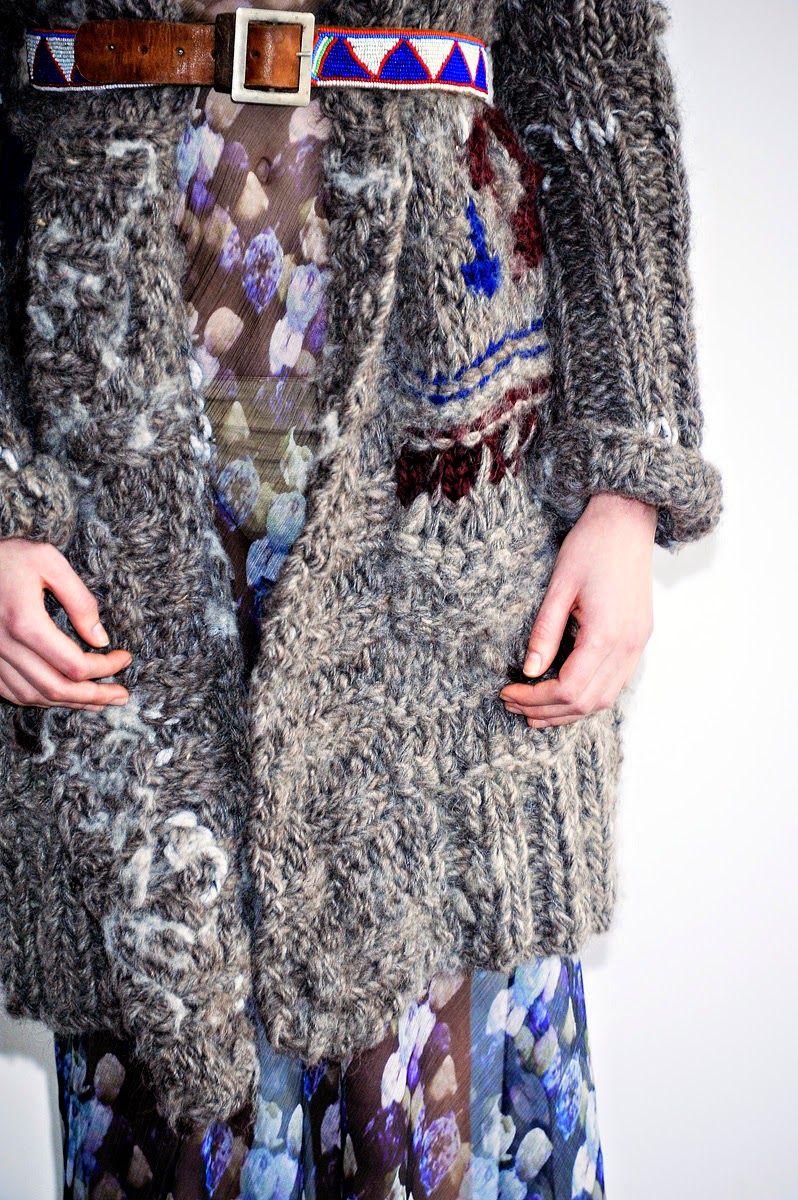 Knitwear designer Amanda Henderson is doing some intriguing things.  I love the bulkiness and the random nature of what she does. Its as though this sweater coat grew, rather than was knitted consciously.  Its a great reference too, to the growing need we seem to have for things that overtly refer to the hand made, and the rusticated.  Of course, the styling addition of the Native American look belt contributes to that overall impression. And the juxtaposition of the hand painted looking chiffon in the dress with the lumpy bulk of the sweater coat speaks to our wildly diversifying culture. 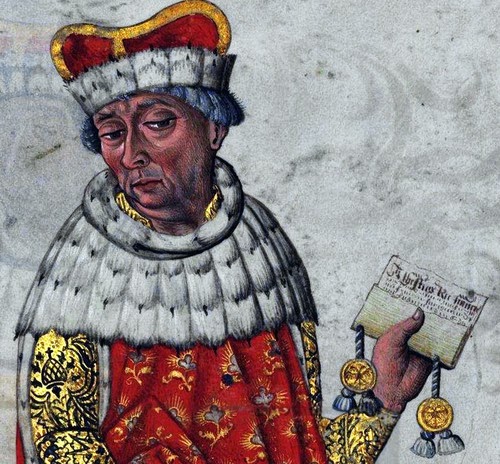 For as long as we have had the combination of Attire, Religion, Power, and Politics we have had folks like this fellow, togged out in the most sumptuous, and expensive of garments in order to, oddly, convince the populace that simplicity, poverty, and lack of vanity were laudable goals.  But as sure as there is a moon at night, gaining power means showing it, and showing it for a very long time meant such panoply.  his is the Archbishop of Treves, painted in 1509.  It shows his Eminence wearing two different, and doubtlessly wildly expensive silk brocades, extensively trimmed out with ermine, even on his mitre.  The faithful of the congregations under his controlling hand paid for all of this.  One wonders if he gave any thought to how fortunate he was, or to the difficult labors of those very people. 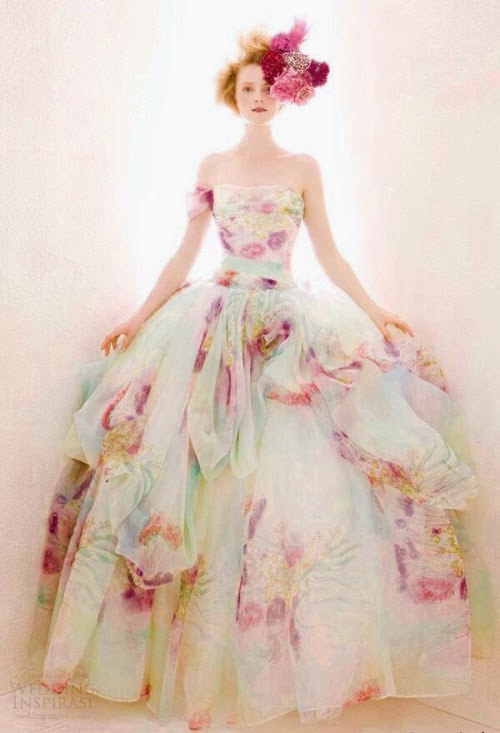 I don't know why, in especial, that we equate flowers with femininity. Perhaps its because flowers are a potent visible symbol of life renewing itself.  But whatever the reason, we cannot escape it that flowers, and in particular pastel colored flowers, have a seemingly unshakable connection to the female, and to those who identify as such. This design is by Atelier Aimee Montenapoleone, and its pretty much every feminine trope for a ball dress you could want, all in one go.  Its strapless, body con through to the hipline, full skirted below, made of something floaty and filmy, possessed of a huge bow, albeit a soft one, and the pattern of the textile is a vast blurry floral that tends to the pastel range.  It presents a pretty traditional image of woman, and someone wearing it would need to project a good deal of assurance to not get overwhelmed by that.  And is it pretty?  Yup. 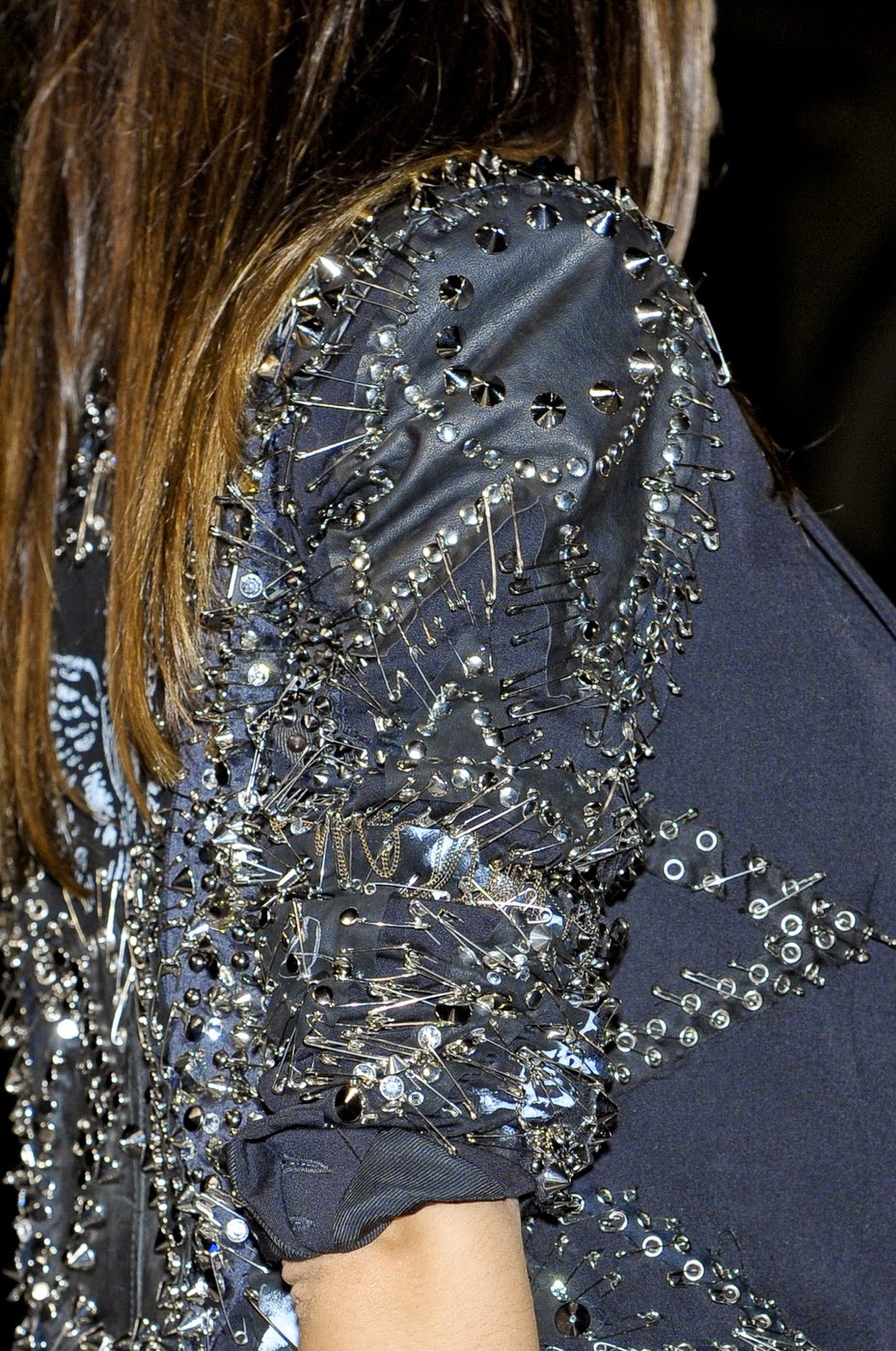 I find it fascinating how concepts shuttle back and forth across the Attire language. In this case, the punk movement from the 80s has made its way, (again) all the way up to the couture realm from its place on the streets.  This is a detail of a Balmain design from 2011.  The intersection of safety pins and studs with the highest quality textiles takes a good deal of the clout out of this look.  So, from the 80s it cycled up to the top of the design world, then shifted back down to the streets, only to cycle back up to the couture 30 years later.  At this point though, punk is such an established look that it will get referred to often, like other periods and styles do, and like those other things, usually without understanding them. 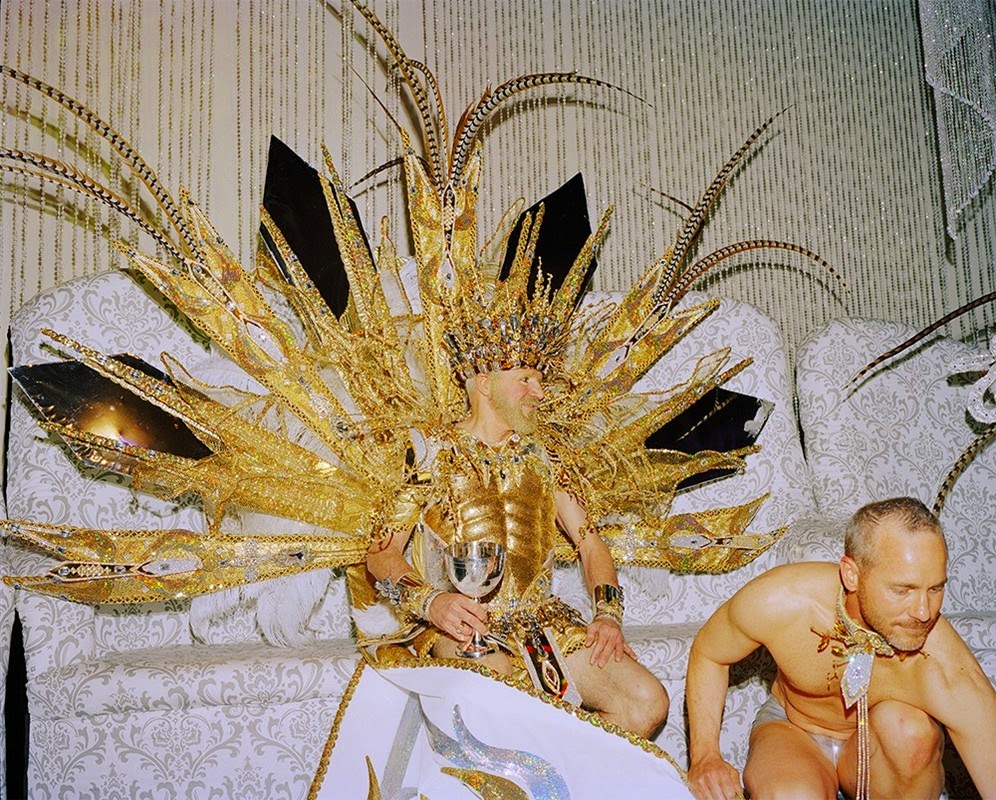 Ah, Mardi Gras in New Orleans, where insurance salesmen and bank tellers can dress up in outfits requiring triple digits of cubic space and squander outrageous amounts of not so disposable income.  Actually, snark aside, it love the idea of Mardi Gras.  I love the idea of occasionally giving ourselves entirely free rein to create our most wild sartorial fantasies, and thereby give ourselves a chance to inhabit another part of ourselves in a public way.  Bravo to Mardi Gras!  I hope it never ceases to give joy. 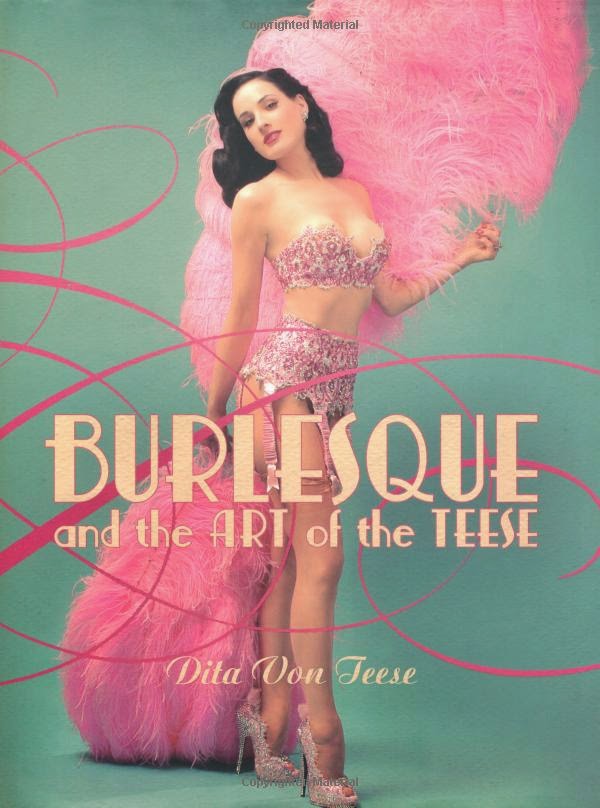 And in another version of recreating ourselves, and forwarding a fantasy, Miss Dita Von Teese, who almost singlehandedly has re-imagined the art of burlesque, and brought it out of the shadows. Von Teese's carefully crafted, and perfectly presented fantasy of feminine beauty and allure is one that jumps over from teh 40s and 50s right into this century with an effortlessness that is breathtaking.  Dita von Teese is a monument of what level of fantasy a person can achieve if they have the wish to.  And in regards to the Attire language, she is a masterful speaker of it.  Learn the language and learn it well. 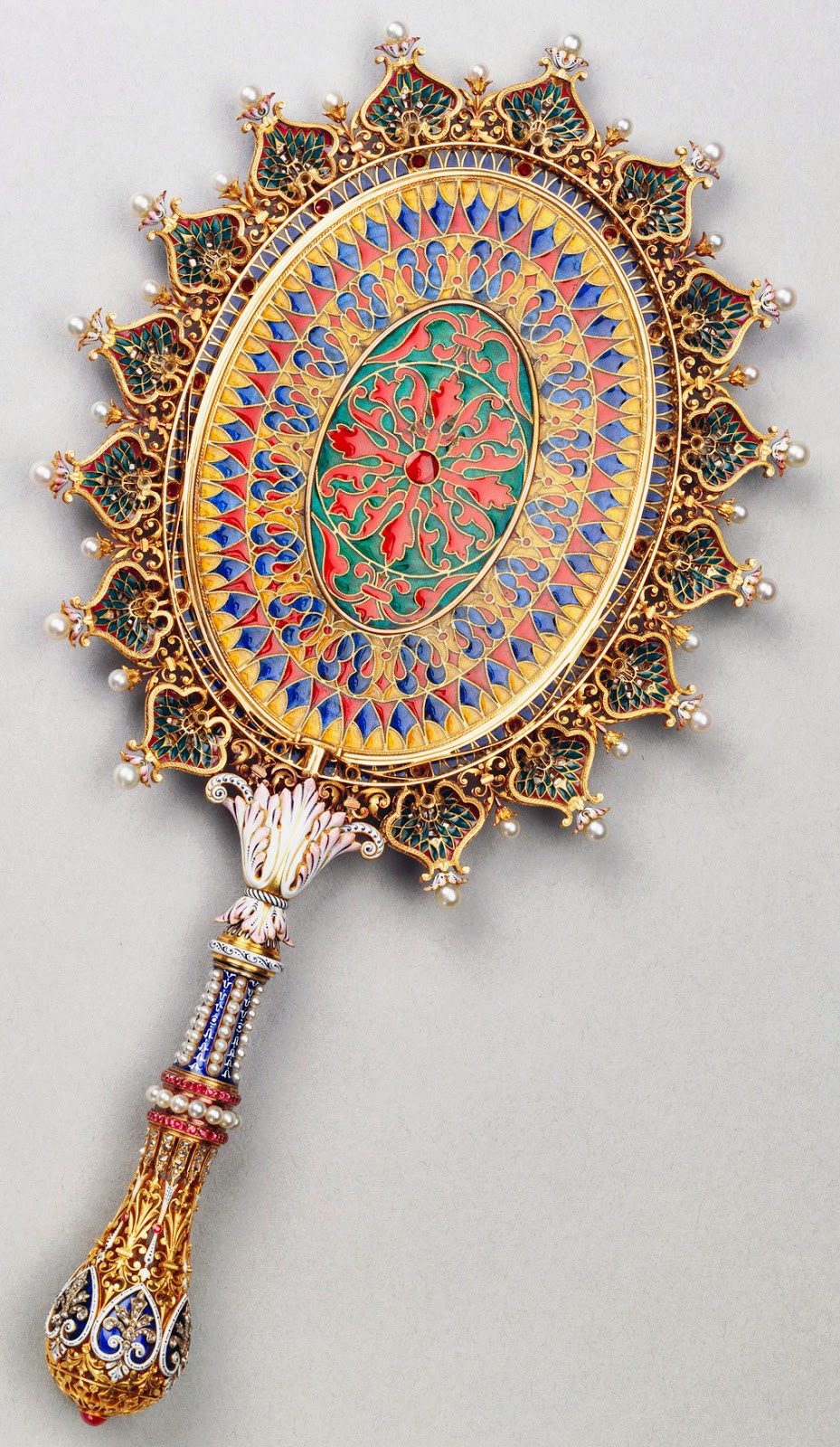 Bringing up the rear today, something that only tangentially applies to Attire.  This is a hand mirror made the the Boucheron firm of Paris in 1867, designed by Armand-Desir Ruffault.  Its made of gold, and decorated with diamonds, rubies and pearls with complex and lavish enamel work covering nearly every inch of it.  As an expression of human vanity, its amazing.  And a fitting close to today's Scatter.

Have a grand Weekend!
I'll be here to chatter at you as often as I can over the next few weeks.