It has been a whole month since I did one of these posts.  So settle back and enjoy the ride through the tangled underbrush of my noggin. 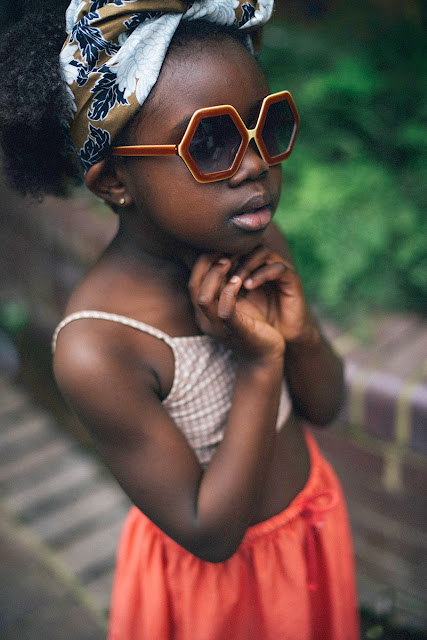 We all learn languages early, in the most formative part of our youth, birth to 3.  And even with the Attire language that process holds firm.  It doesn't matter that for the larger part of the world, small children don't get the luxury of choice in their clothing, but they are busily learning the syntax, and subtextual meanings, nonetheless.  So by the time they are adults, they have a well formed understanding of the potentials of the vast vocabulary that we have to hand.  This small girl is already learning what the language means, and what it does.  Sure, she is being guided into gender normative patterns because of the skirt and top, the earrings and sunglasses; but whatever she has on, the base line consideration here is, though she does not know it, and her parents likely have never considered, that she and they are taking active part in mastering a whole new manner of expression. 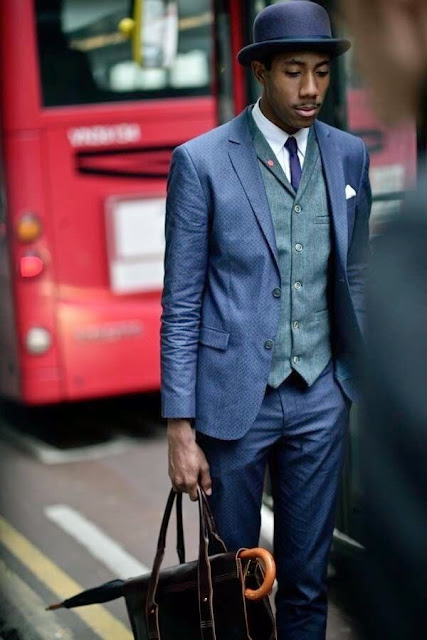 Speaking of mastering a language, here is another person, now adult, who has not only learned the language, but is using it skillfully to present a particular image of himself as a stylish, but dependable and responsible person of business.  The classic London business man tropes of bowler, precisely cut suit, brolly, and valise are all present, its only the cut of the suit, and the style of the valise that cue us that this is more than a cardboard cutout of a classic professional Londoner.  Though this man chooses to slot himself into the business community, he is still able to express, albeit subtly, his own away from work tastes.  And having just returned from England, and a week of it in London, I can tell you that men like this do indeed walk the streets there. 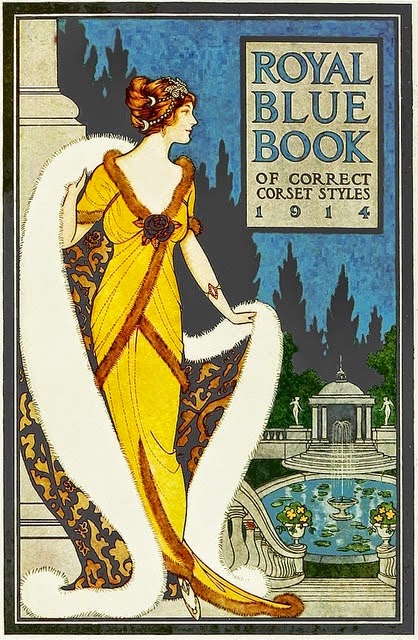 Not only were corsets still routinely worn, well into the 20th century, but there were indeed multiple styles and types of corsets for differing looks and activities.  A lady about to engage in a tennis match, would still wear one, but it would be more loosely fitted and would have fewer bones, to allow for more mobility, but a lady about to dress for a formal dinner or reception, would be as tightly bound as could be done.  Since at such events women were mostly seated, or simply standing, the tighter lacing would have been bearable. Also a certain vanity about presenting the best possible impression would have prevailed, making some discomfort, a needed, understood reality. 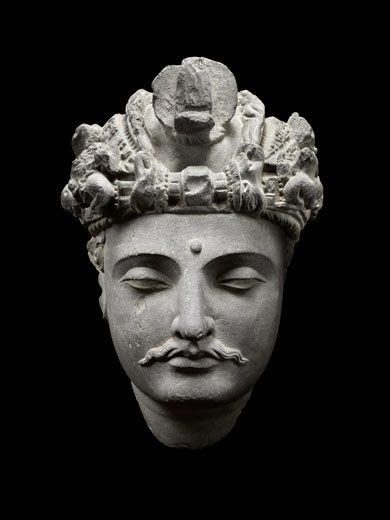 This is a 3rd century bust of a Gandaran Bodhisattva.  Even within the presentation of deity and holy personas, the hand of Attire is present, affecting the eventual look.  Of course this image refers accurately to the ideals of Indian male beauty, but its the presence of the moustache that shows the hand of the Attire language at work.  Facial hair fashions changed in India over time, just as in any other culture; so the presence of this particular type of moustache is a marker of its particular time, and the prevailing mindset about male attractiveness. 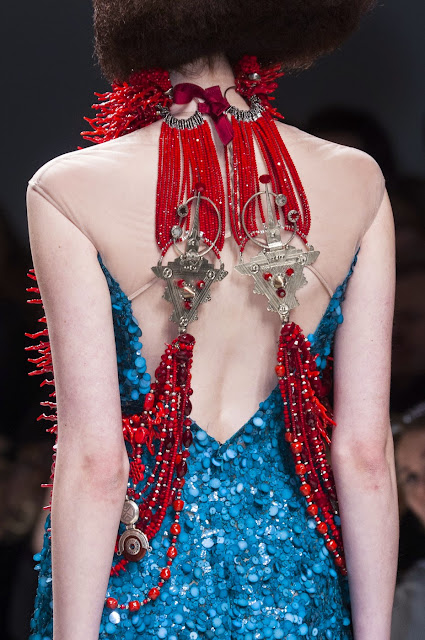 Julien Fournie, in the S/S collection for 2015 showed the runway pieces decked with massive, overwhelmingly large, complex jewelry.  The intensely red piece here has a strong ritual feel to it, since its like a separate garment, in the way it wraps the torso.  Real world useful?  Not at that scale.  But I could imagine something scaled down working in actual life away from red carpets, and the Met Gala. 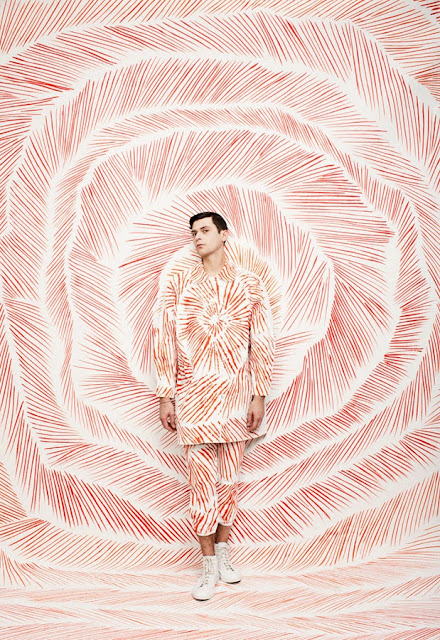 Here I go with that Avant Garde thing again.  This one is pretty mild mannered, really.  designed by Julia Galdo and Cody Cloud, this tunic and pants breaks the mold of proportion and pattern scale for menswear.  It also falls squarely in the gender free zone, since this could be equally worn, without alteration by any person so inclined.  The tunic, I could see as quite adaptable to many people and in many textiles and patterns.  The pants are tougher, because of their length, but they could have considerable use as well.  Thoughts, folks? 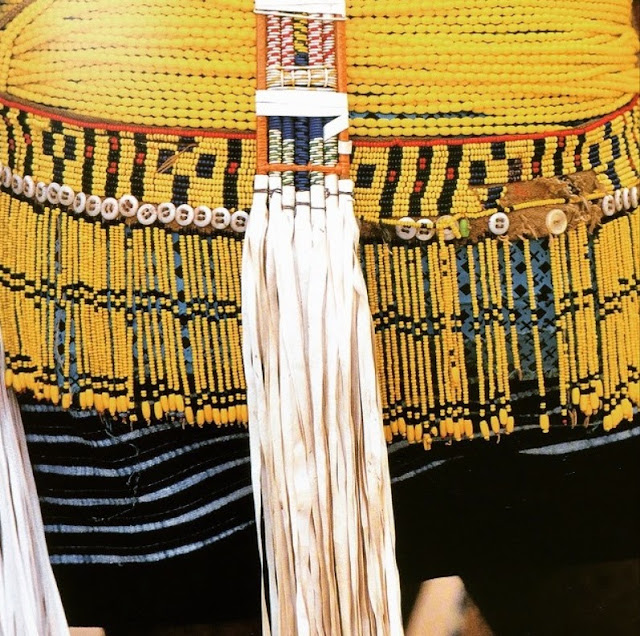 This close up image is of some bead work from Kenya.  What struck me, and it has resonance to my recent trip and a conversation I had there, is that in every culture of the world that does bead embellishment, the seed bead application you see on the horizontal band is in use.  It is an Attire universal crossing centuries and borders.  I love things like that. Sigh. 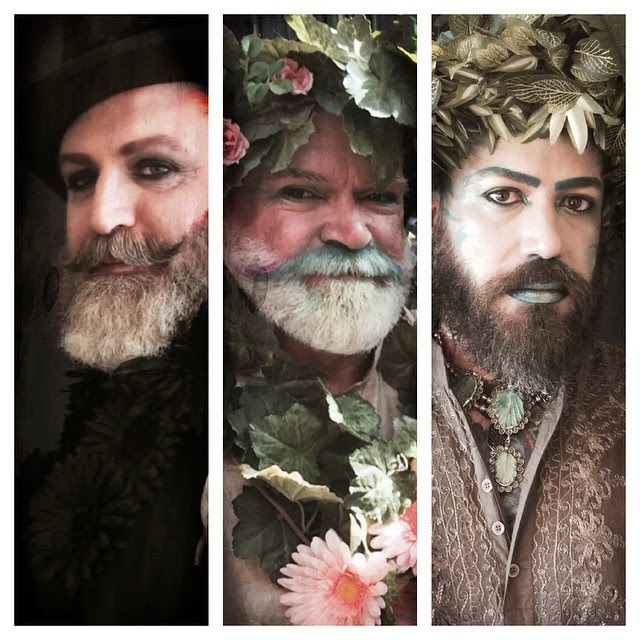 More and more men in western culture are allowing themselves the license to play with dress up, make up and fantasies of visual presentation that decades past they would not have permitted themselves.  Frankly I can only applaud that, for what it implies about changes in men's internal attitudes about themselves.  And as a part of the Attire dialog, having more ways to express can only be a good thing in the end.  Three attendees at a botanically themed party.  Me likey. 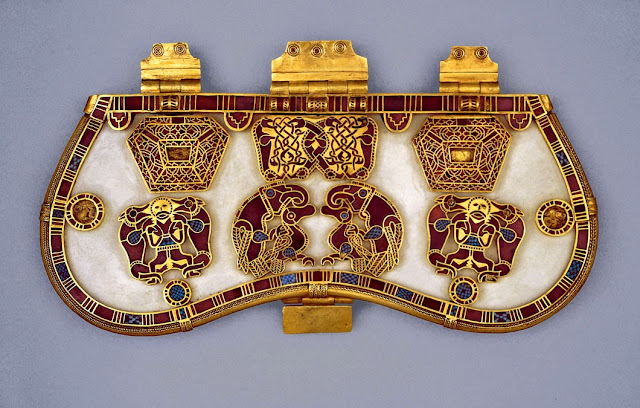 Found in Suffolk, England, this object is a gold and enameled purse lid from the early 7th century AD.  Its referred to as the Sutton Hoo Purse Lid, for the exact place it was discovered.  it shows extremely high workmanship, and very fine detail, even to the crosshatching within some of the blue enameled sections. The design style is straight up Celtic, and the condition, nearly perfect considering its age.  Wanna make sure something lasts through time?  Metal wins, every time.  This lid would have been attached, with its accompanying frame ring, to a leather, or textile pouch; and worn at the waist. 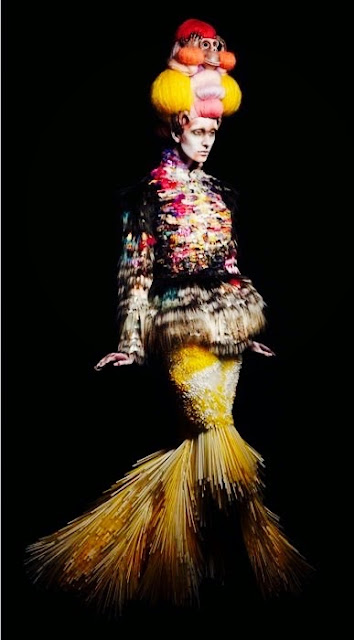 More Avant Garde, cause I can't help tweaking things a bit.  Nikoline Liv Andersen designed this rather extraordinary ensemble.  Part bird, part fruit basket, part African tribal ritual costume, this climbs over the fence from avant garde's house, and into the backyard of wearable art.  The densely layered textures, and strangely skewed proportions are all really intriguing to me.  I would love to have the opportunity to see this in real time, I bet its amazing up close. 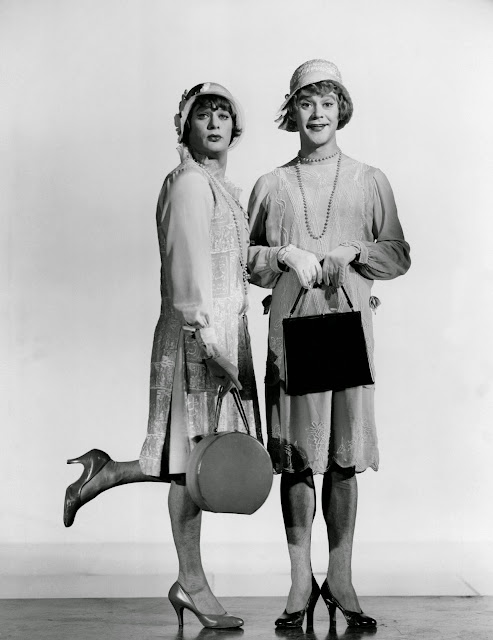 I have loved this film, Some Like It Hot, for many a year, in part because I saw it at the Castro Theater on a Sunday afternoon on a double bill with Victor Victoria, accompanied by Sister Missionary Position of the Sisters of Perpetual Indulgence on my first visit to San Francisco.  But I had to include this in the mix today because of a tidbit relayed by Tony Curtis regarding the costumes for he and Jack Lemmon.  Originally the idea was to pull costumes from stock for Lemmon and Curtis, but they approached designer Orry Kelly, who was slated to do Marilyn Monroe's costumes and pleaded with him to do their dresses too.  He agreed, and the result was delightful visually; and doubtless helped the actors performances, since the clothes were truly right for the characters, and action. 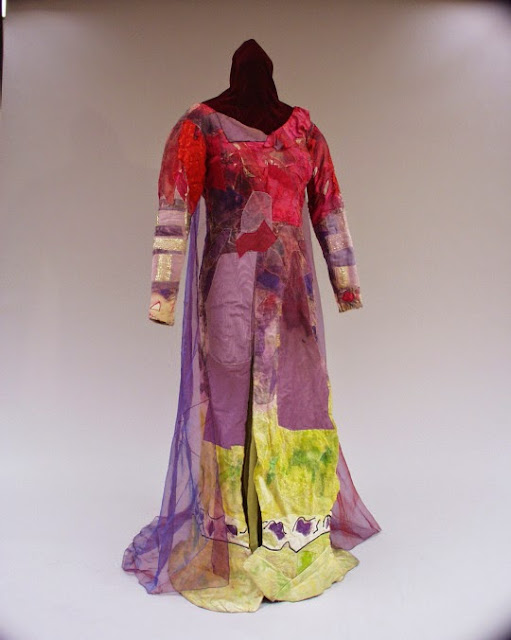 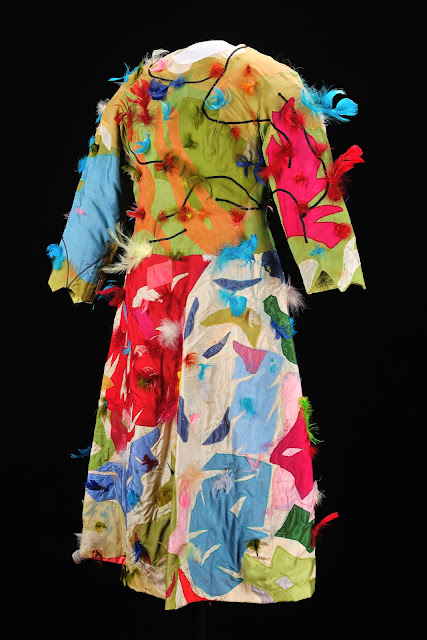 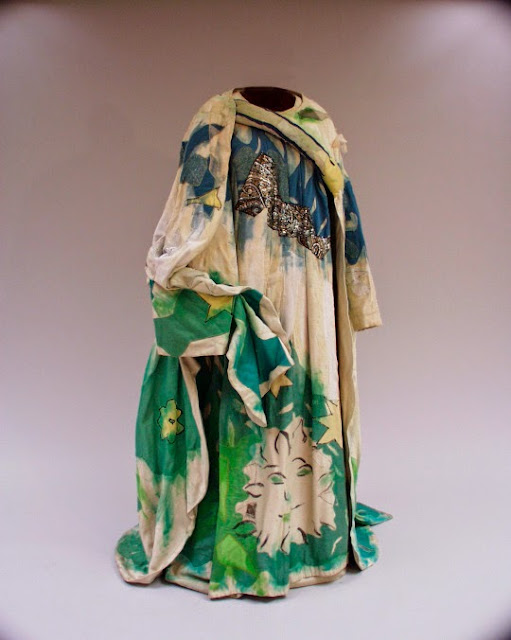 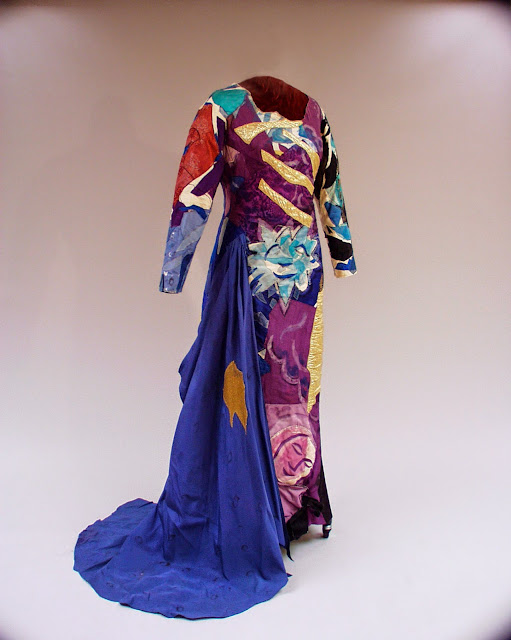 Bringing up the rear, courtesy of the Fenimore Arts Museum of Cooperstown New York a selection of costumes designed by Marc Chagall for a 1967 production of the Magic Flute.  The hand of Chagall is clear in each one, with his unique artistic vision undimmed by the requirements of opera costume.  In order top to bottom: Pamina, Papagena, Sarastro, and the Queen of the Night.  Brilliant costume work, from a consummate artist.

That's it for this week!  Enjoy your weekend all!
Posted by Paul G. Ellis at 6:22 AM