Blythe House, The V&A, and Me- Part Two

For this next installment, sadly I have few images to share of this magnificent men's court suit.  I caught a few glimpses with my camera in the exam room, but the V&A archive has only one image, a close up of the embroidery work.  That said, let me move on. 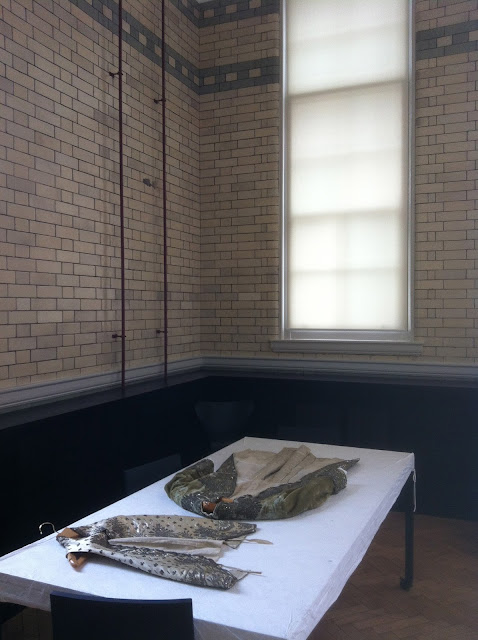 The table bearing the coat and waistcoat were literally the first things I saw as I came into the exam room. I let out a small gasp, truly.
After finishing with the 1740s mantua I moved to the next table, a truly impressive men's coat and waistcoat of the 1780s, so it would have been contemporary to the reign of Louis XVI. The breeches are not in storage, and probably no longer exist.  But the coat, once of brilliant turquoise silk velvet, and the off white silk waistcoat were very much worth the time.
The coat's silk velvet had faded to a pale, nearly celadon green shade from its original hue, but this is quite common, since many dyes were unstable, and would begin to break down over time, changing color as they deteriorated.  In shape the coat was a perfect example of cut and fit for its day, and it clearly had been made for a nobleman of extreme wealth, and extravagant tastes.  The coat is spectacularly embroidered over its surface in silver metal embroideries, with metal sequins and glass paste stones, with silver foil backing. 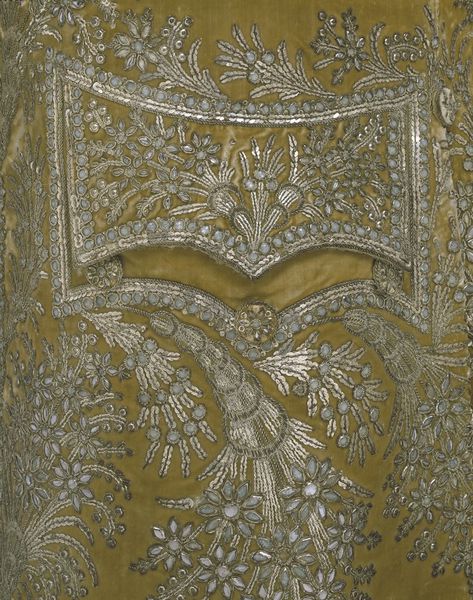 The beautiful sprays of flowers arc over much of the coat's surface, and the back, when Sarah turned it over for me, was perhaps even more spectacular, since the decorations followed the curving seam lines, from shoulder to hem, merging together at the base of the back.  As a side note, the coat must be quite heavy, not only from the velvet, but the amount and type of the embellishment on it.  It was obvious as Sarah lifted it, that it was a weighty thing.
The waistcoat of what would've been considered white silk was similarly embroidered in silver, not an identical pattern, but one that was obviously chosen by the gentleman for its harmony with the coat decoration.  The work there was extremely fine, and much smaller scaled.
Another side note:  The coat and the waistcoat would have been embroidered by the piece on the uncut cloth, and then cut out and assembled for the client, and in many cases, such pre-done work included embroidered button covers to match.  In the case of both these objects, that was so.
One of the many things that made this experience so wondrous was the interaction between me and Sarah, who was every bit as beguiled, and intrigued by what we were seeing as me.  And as we examined the coat, and saw that at the shoulder line, the velvet had been extensively, and expertly repaired we both wondered if the material used to fix it had come from the missing breeches.  And too, we both mused about what that coat would have looked like, with its silver embellishments untarnished, and the paste stones un-clouded, as the wearer moved about in a candlelit room.   Sighs of happiness. 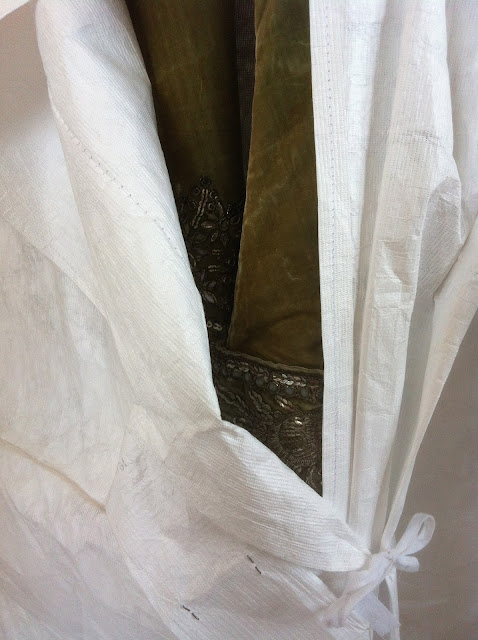 Tomorrow?  The Pencil box yellow Robe ala Francais.
Posted by Paul G. Ellis at 7:49 AM