It has ever been true that, within the rarefied environs of royal courts, how much physical space is taken up by a person is directly in proportion to how important that one is.  There have of course been variations on that theme, where relative size varied greatly.  But at no time before, or since, has court dress taken up more space, and required more sheer bulk of materials and decoration, than the mid 19th century.  Clothing was more densely decorated in the 16th and 17th centuries.  Dresses extended out to the sides further in the 18th century.  But at no time have skirts gotten bigger around, or trains longer than during this era.
What I have dug up here is a prime example of the extremity that was reached in dimensions.  With grateful thanks, of course, to the Metropolitan Museum of New York for this amazing set of garments. 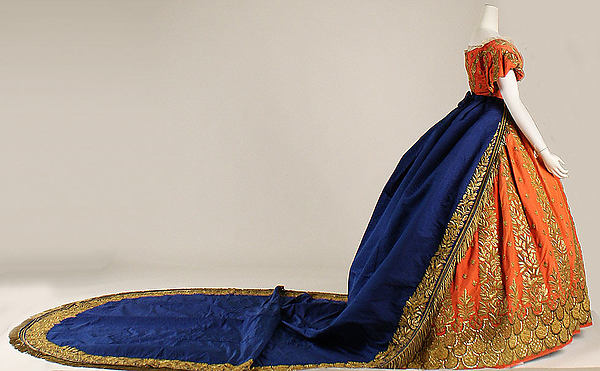 Crafted between 1857 and 1860, this Italian court ensemble includes a skirt that is nearly at the widest point that was reached, before technology finally failed and the volume got pushed backwards into a bustle form.  The dress is made up in a brilliant orange silk, and the waist mounted train is of the same type of silk, but in a vivid royal blue. 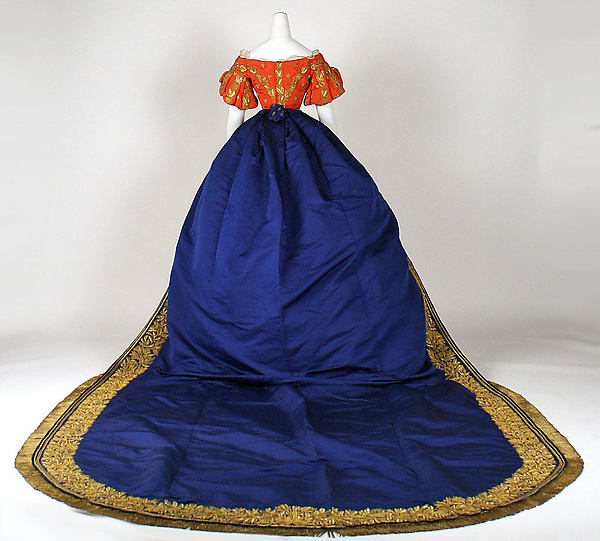 The design of the dress is pretty straightforward, allowing the extensive gold work decoration to take front and center position.  In fact, the dress structure is so simplified it could stand as a model of the essential silhouette for the time.  Domed,  very full, round skirt, slightly short-waisted, pointed bodice, with low, broad neckline, and short sleeves. 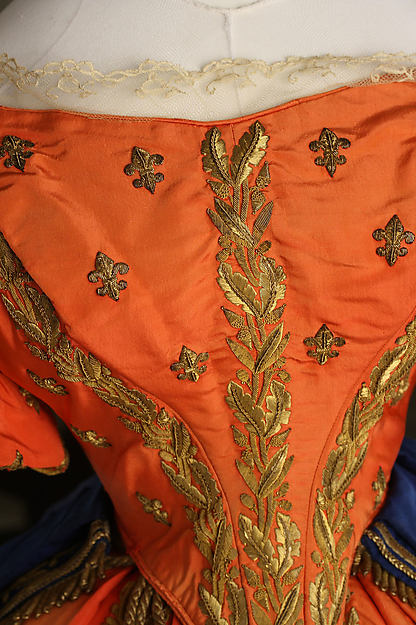 The skirt is four feet in diameter, meaning that the circumference is over 12 feet.  The train itself is ten and one half feet long from waist, to end point.  And since the dress measures 52 inches from neck to hem, the lady must have been about 5' 3" or 4". 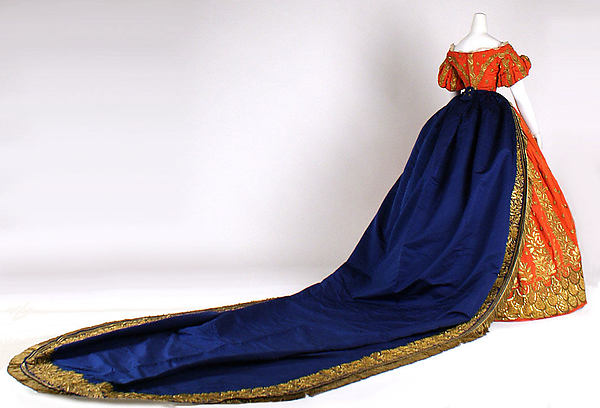 The only other element, apart from the metal embroidery, is a narrow frill of lace along the bodice top.  The gold work is nearly neoclassical in design, relying on foliate forms, rectilinear designs, and swags, with a scattering of fleur de lis, marking the still strong connection between Italy, and France. Since the embroidery is entirely of gold, which does not tarnish, it looks spanking new from top to bottom and gleams warmly as light plays over it.  Even the gold bullion fringe around the hem of the train is undamaged.  Similarly, the silk fabric shows no signs of serious deterioration, or structural stresses.  So when not in use, this dress must have been stored flat, otherwise the weight of all the metal decoration would have started to pull the dress to pieces.  Its unlikely, though, that this dress saw more than a few uses, so its survival in such condition is less surprising. 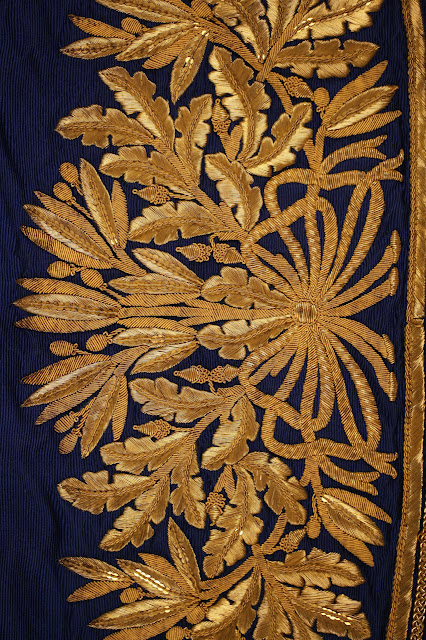 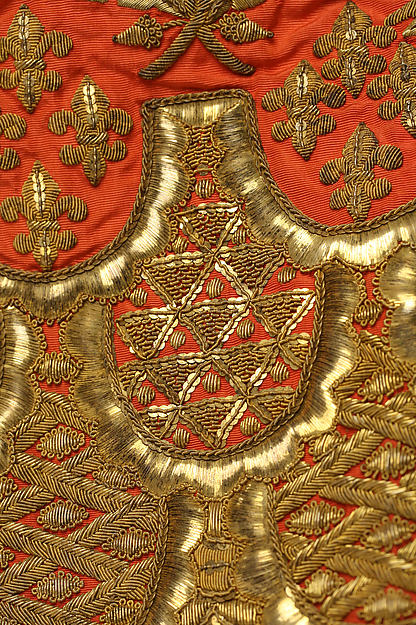 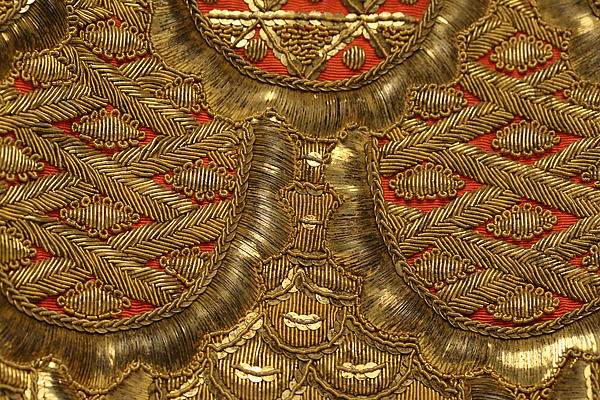 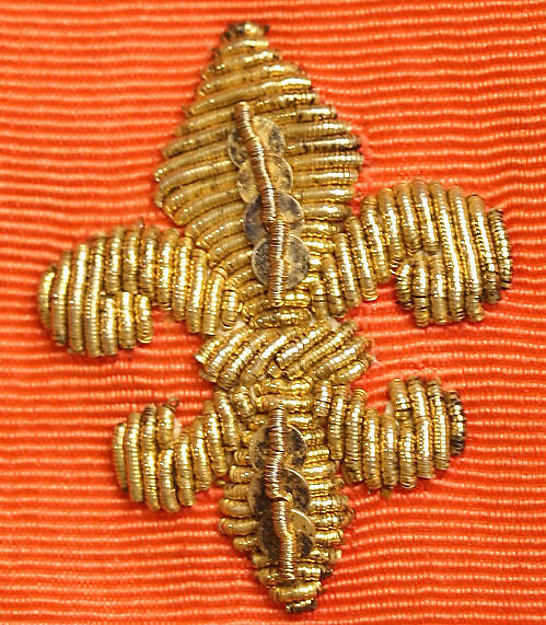 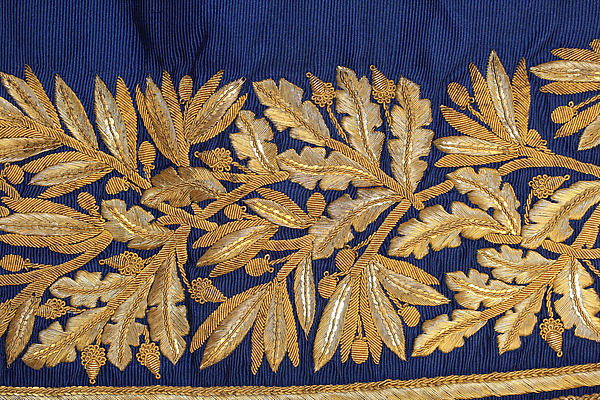 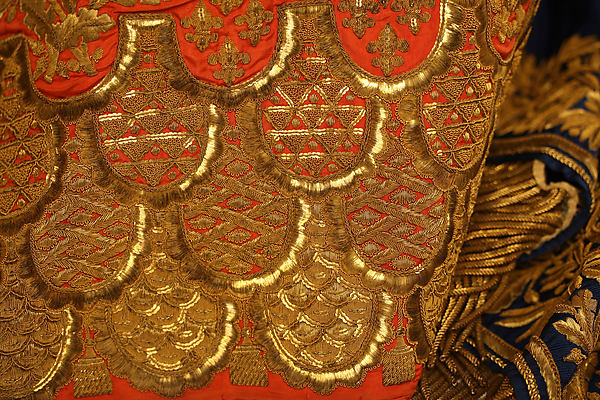 This is an emblem of an age. It is a marker of how we perceived of power, and how it should be shown.  As a comparison to today's costs, this ensemble would, if it could be made at all, would likely cost over a million dollars to recreate.  The gold embroidery alone would require dozens of skilled workers hundreds of hours to complete. 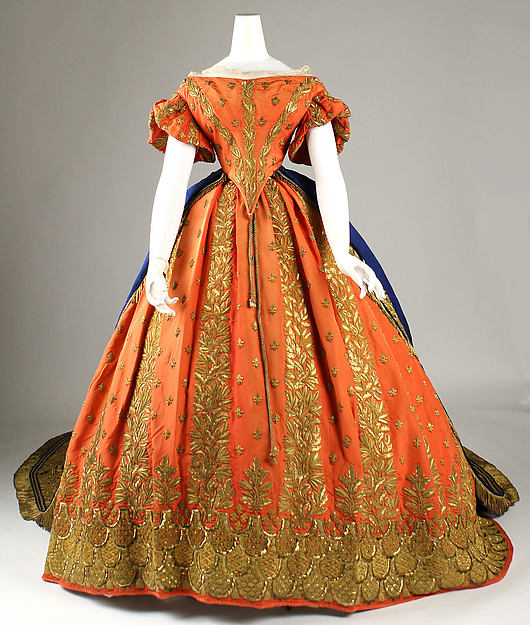 What is sad is that we have no idea whatever who wore this gloriously bold dress and train.  The attribution listing on the Met's page states only its age, fabrication, dimensions, and that it was part of the Irene Lewisjhon Bequest in 1954.  One thing is certain, whoever she was, she was no wallflower. She was a woman confident of her position, and her strengths.