Back into the groove, my friends.  I missed a week of Scattering, so here we go. Another foray into my noggin's nooks. 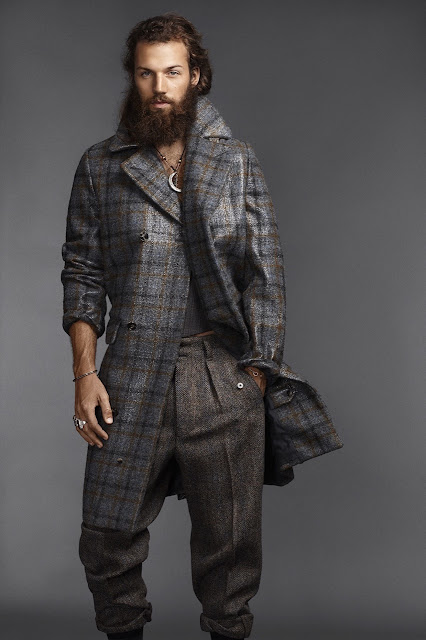 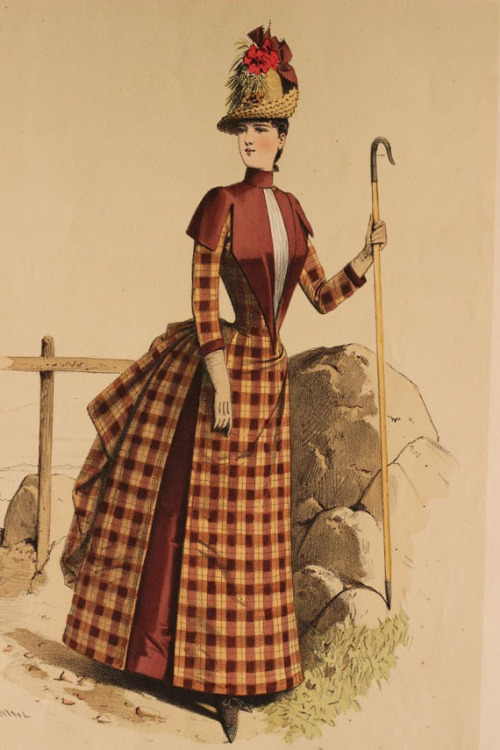 This 1880s French fashion plate is a perfect example of just how far we have journeyed.  This ensemble is being presented as ideal for country sports, or walking about outdoors.  None of us now could even imagine trying to go hiking encumbered by so much.  Yet in its time, this was not only fashionable, but to a degree, forward thinking.  The relative simplicity of its design, and its near lack of ornamentation were attempting to take into account the need for freedom of movement, and a need too of not worrying overly about one's clothing.  The lightweight wool plaid would have stood up nicely to sitting at a picnic or hiking in the French countryside.  But it also stands as an image of what was to come for women.  As more and more women engaged in outdoor sports, and also entered the working world, the Attire language made accommodations, coming up with new manners of expression, that would ultimately lead to the banished corset, higher hemlines, and the consequent radical increase in mobility, as well as the subtle, but real shifts in women's view of themselves. 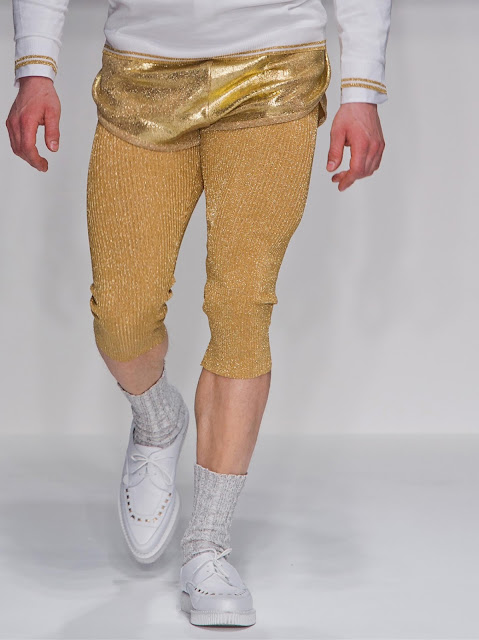 It seems that the 80s fascination with leggings and spandex for men has made a return visit. As a natural outgrowth of the fitness obsession we are in the midst of, it makes sense that guys would want to show off all their hard work at the gym.  I will say I think the knitted leggings, that aren't quite a skin tight are more appealing to me than the previous iteration.  So I say, why not?  If you've got the wheels for em, wear em.  And gold metallic shorts?  Also, why not?  I was recently walking through the men's department of Bloomingdale's in SF and wondered, loud enough for a clerk to hear me, if there was some law that forbade Bloomingdale's from selling any clothing that wasn't black, grey or navy.  She sidled over to me and said, sotto voce, "Imagine having to work in the middle of this day in and out. Its a miracle I don't fall into a coma." 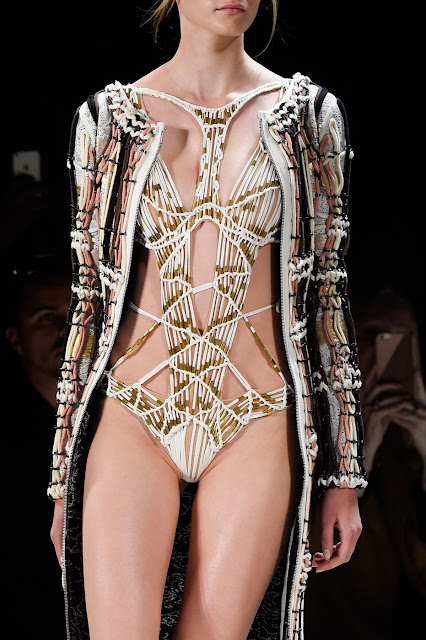 If this is meant to be a bathing suit and beach cover up, this is surely a suit for long after you have your tanning done.  Just imagine the stripey look if you sunburned with this on.  As an artistic exercise its interesting.  Do I think it would be a relevant word in the Attire language?  Nope.  Now the cover up, on the other hand is a fascinating combination of textures and colors.  That, though it would not be made in the ready to wear world is a deeply expressive thing that could adapt to many uses.  Herve' Leger' S/S 2016. 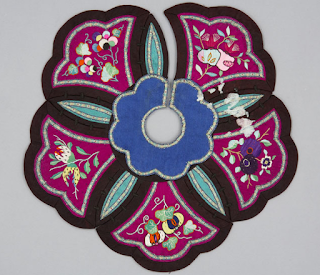 This festival collar is from China, between 1900 and 1940. As an Attire word I find it fascinating.  Here's an article that by putting it on can absolutely alter the wearer's appearance in a positive way. Yet, its such a simple thing really.  Its merely a decorative circle of material.  And it holds endless potential design variations, allowing it to uniquely convey the wearer's thought and mood.  We used to employ similar things in Western culture, but they have all faded out of common parlance. The Black Venus was a Canadian vaudeville act, here pictured in 1914.  Its interesting to me to see that the costumes of the ladies here are a laundry list of every popular style variation at the time.  Their dresses are all ankle length. The skirts are all layered, and one of them shows the asymmetrical draping that was quite en vogue.  All three dresses have short sleeves, and the waistlines are somewhat above the natural point.  In fact, any of these ladies could enter an evening party without looking remotely out of place with their apparel.  The only step away from normal styling is actually in the hands of the fellows.  Their evening suits have velveteen collar tops, which would not have been done.  So overall, the looks here are realistic, rather than show costume.  What's an intriguing question is, was this based on finances, or was it a choice that they thought would give them a broader audience? 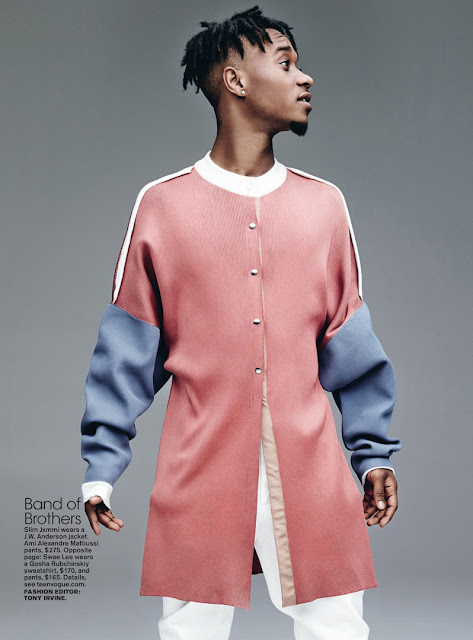 More pushing at the boundaries of menswear.  I love that.  This is a J.W. Anderson jacket.  I enjoy its color blocking, and simplified structure.  The cut seems to be a variation on the basic t shaped tunic.  Which means it could be rendered in nearly any textile, or combination of them, to good effect.  I would love to see more of this sort of thing emerging in the broader marketplace.  Its a bit edgy, but not so out there that most men would run from it, especially if made up in other colors.  Would I wear a coat like this?  Yep.  Not this pink though, that shade would make me look ill. 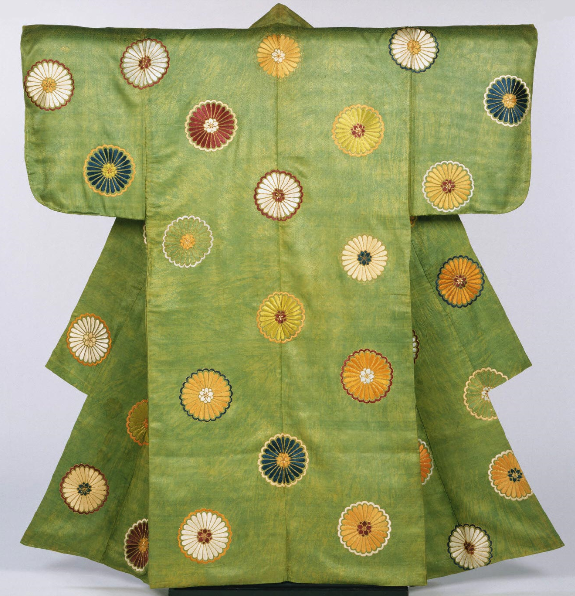 Speaking of t shaped tunics,... The absolute ultimate expression of the form is the kimono.  Its flat structure makes it an ideal space on which to place all sorts of images.  The result is often high art. The kimono is both a deeply intellectual garment, and also a potently sexy one. Its intellectual aspect is inherent in its physical structure of rows of rectangular strips of varying length, only altered by the curves of the sleeve bottoms.  The sexy is about the huge shifting volume encasing the body, both concealing and revealing as it moves.  This example is a Noh costume from between 1750 and 1800, in green silk with a repeating pattern of stylized flowers.  Simply glorious. 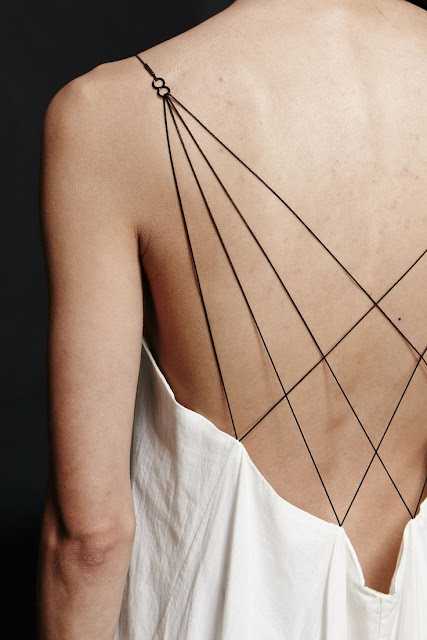 Apparel and Architecture design frequently merge.  This is a pretty obvious example of it.  Literally using the concept of suspension, the thin cords act as cables, and the fabric reacts while in motion, to the stress placed by the attachment points.  I'd love to see this moving.  I can easily imagine that the fabric undulates freely over the body while walking. An incredibly simple notion, but eloquently rendered. 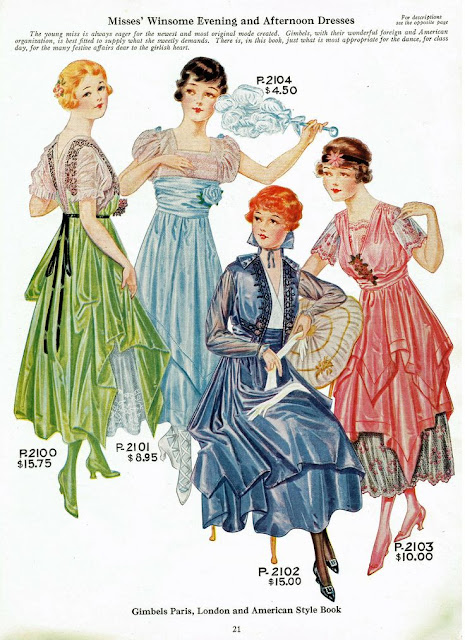 A page from the Gimbels catalog of 1916, showing a newer category.  Misses.  As the ready to wear market continued to expand it became clear that there was a real and ready need for clothing that would be suitable to young ladies who were out socially, but as yet unmarried.  Looking at these prices, these were not cheap clothing.  They were most likely what we would call now, pret a porter, meaning that a good deal of the work was hand done.  And 15.00 in 1916 was equivalent to roughly 375 dollars now.  For many people that was a month's wages.  Also, in 1916, hemlines were beginning their rapid ascent to knee length that would happen in just a few more years.  So this is a delicious glimpse at a changing world. 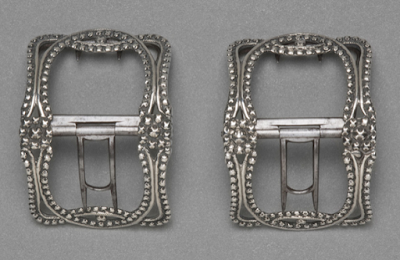 For a very long time, shoes didn't have permanent closures. Buckles to close shoes were a valuable accessory item that was changed out for multiple pairs of footwear.  Both women and men used them, and good ones were so valuable that there were buckle thieves, who would wait for the opportunity to snatch them right from the wearer's feet.  The practice of decorative shoe buckles, and shoe clips, continued well into the 20th century, making it possible for a lady to change up the look of her shoes with ease.  Men stopped using interchangeable buckles in the earlier 1800s, when men's clothing became much simplified.  Its an idea that seems to be reemerging in the women's shoe market now, with shoe clips starting to show up as novelty accessories.  Men's shoes?  Are you kidding?  Not yet anyhow.  These two examples are both American made, and from the 1700s. Silver, and steel with paste stones. 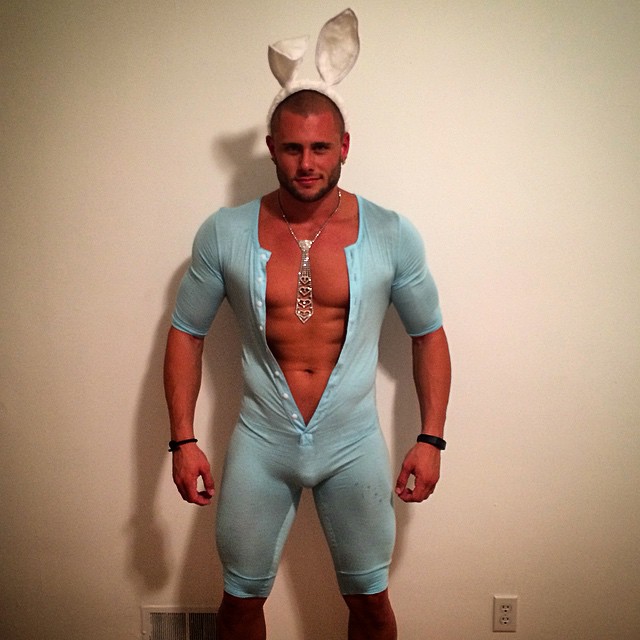 Sometimes I can only sigh.  I know this is deliberately silly. That much is obvious.  And its quite clear that its supposed to be sexy.  But as a collection of Attire words trying to convey a thought, I think its a fail.  That is succeeds at all is nearly entirely due to the handsome dude wearing these things.  But the message is decidedly mixed.  I'm particularly puzzled by the rhinestone necktie.  Help me, someone.  I just don't get it. 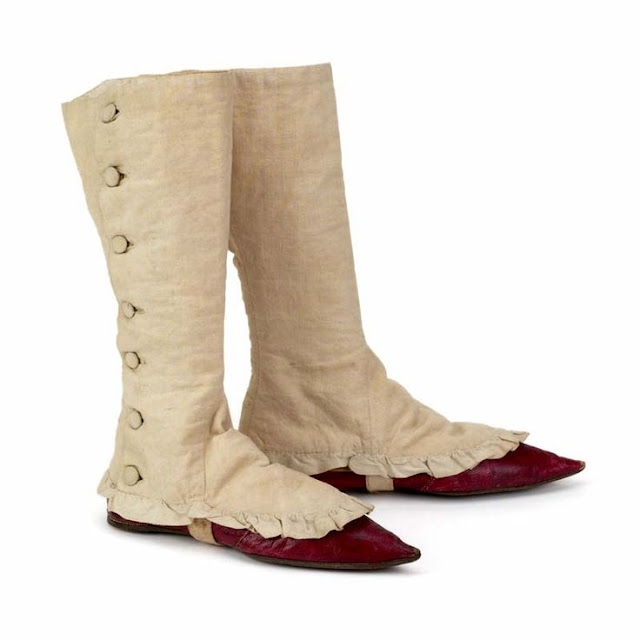 The flat shoes with pronounced points are European, and the cotton spats with ruffles are American, from about 1810.  The use of spats for outdoor wear was pretty common, and the survival of these is testimentary to their probable rare use.  A lady would have worn these out and about in town to keep her lower legs warmer, and to protect her shoes a bit.  Since the fashions of the times were quite lightweight, their utility is obvious.  And it must have been a charming accessory to see these ruffles peeping out from under milady's hem. 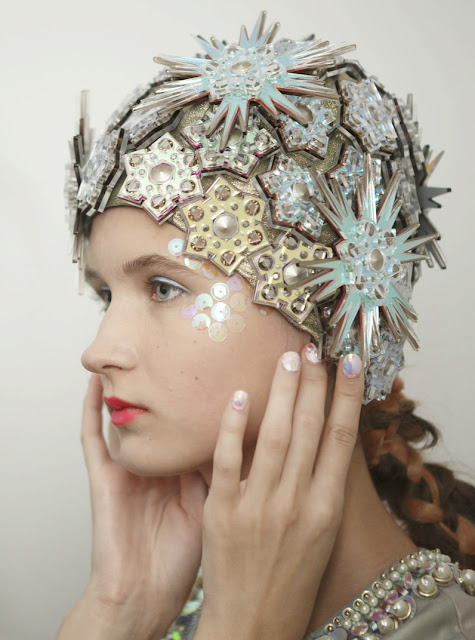 To round out this Scatter, something from Manish Arora.  I just fell in love with the crazy beauty of this headdress/scull cap/hat thing.  There's something about it that inspires thoughts of some sort of elaborate ritual ceremony.  Like she's the high priestess of some religion that worships the stars.  It just made me smile really big, is all.

And that, my friends is this week's Scatter!  Have a grand Weekend!
Posted by Paul G. Ellis at 6:23 AM