Parure: A Set Of Lights

Parure; a set of matching jewelry meant to be worn together. 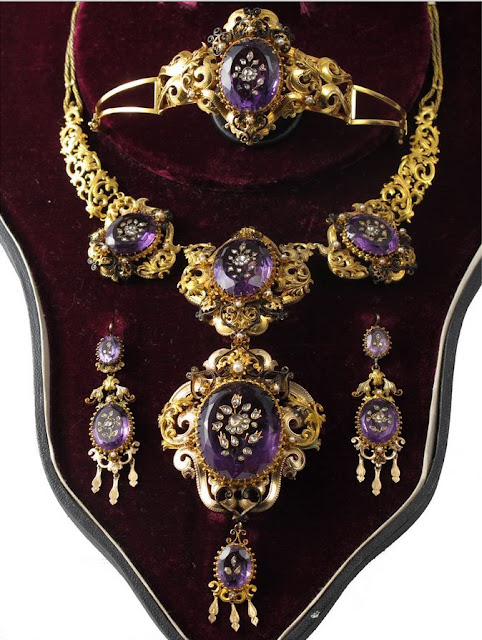 While no one knows precisely when the idea of a completely matched set of jewels emerged as a design concept,  there were glimmerings of it as far back as Elizabeth I.  The queen of England did love her jewels, and ostentatious display was considered a royal responsibility.  So she had ample supplies of matched pins and buttons to sew to clothing. We could think of it as a precursor to the birth of the parure. 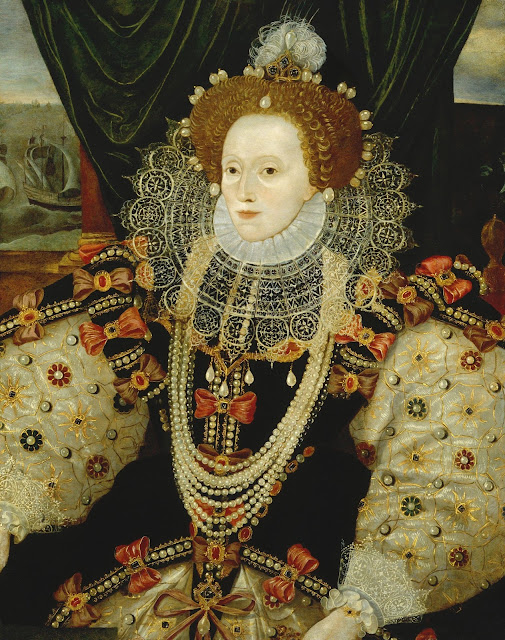 It wasn't really until the 1700s that the idea took hold, to become immensely fashionable in the 1800s, and then fade into disuse in the 1900s.  It was and is connected to two things primarily from a  psychological perspective. 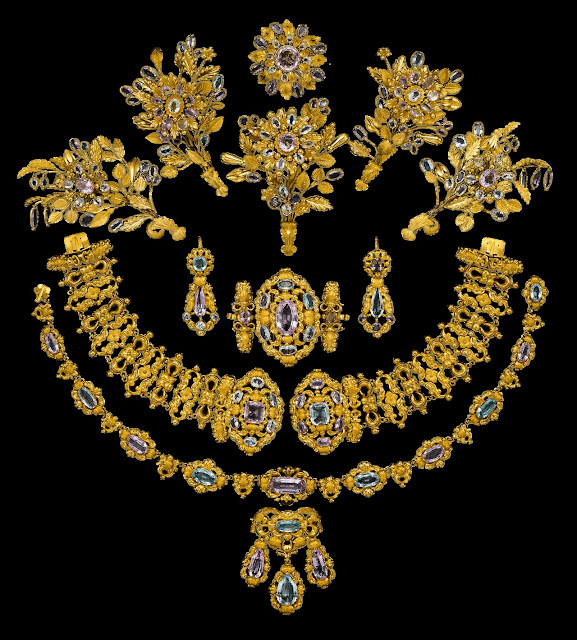 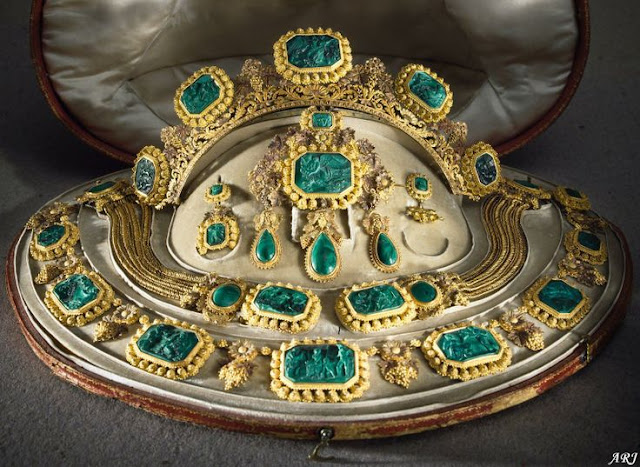 The first and most obvious connection is the in your face desire to display conspicuous wealth, and thereby to reinforce position and dominance, socially and to a degree, ethically.  We did then, and do now, use our apparel to place ourselves in positions of power.  During the time the parure was a thing, it was about the inescapable understanding that jewels meant money.  Now it is far more about identification to, and recognition of luxury brands, rather than the overt display of jewelry.  Even on the red carpet, the kind of mass of gemstones in these images would be thought overplayed. 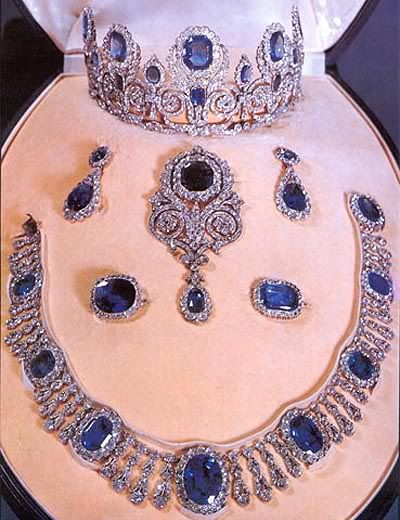 The second, less obvious motivational connection is the desire for order.  As society became more rigidly structured, with more and more layers of social rules and regulations coming into being during the period I describe, the idea of a set of jewels that could be worn together without fear of a misstep became a very appealing one.  It's much like the ready to wear idea of a series of separates that all work together so that the customer need not concern themselves about whether things coordinate or not. 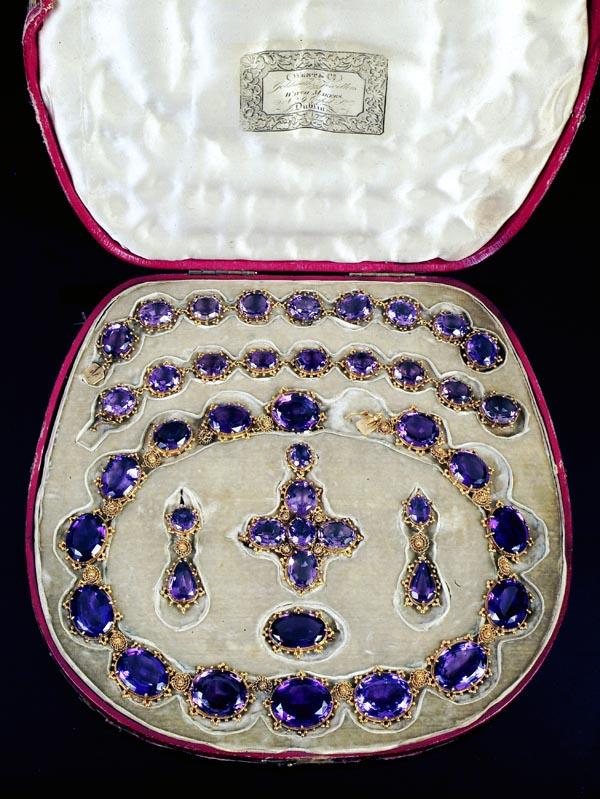 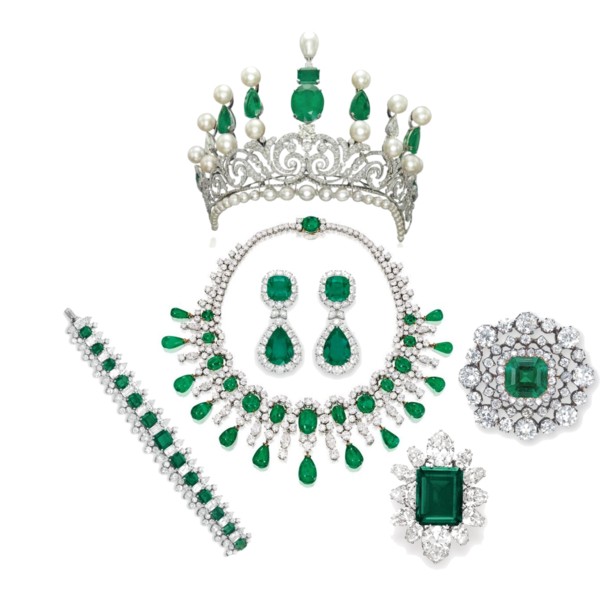 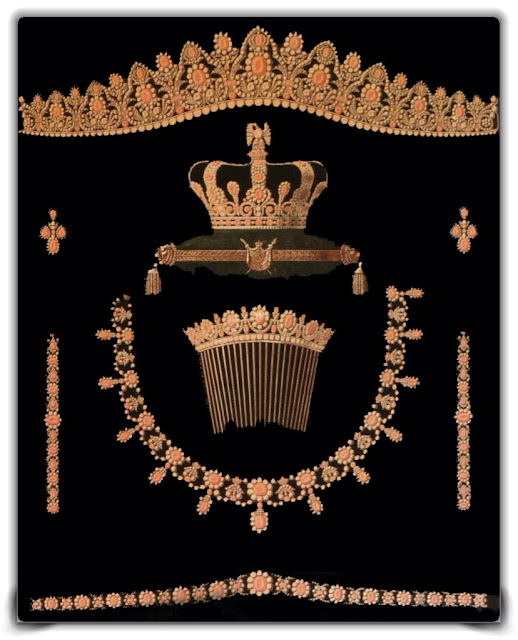 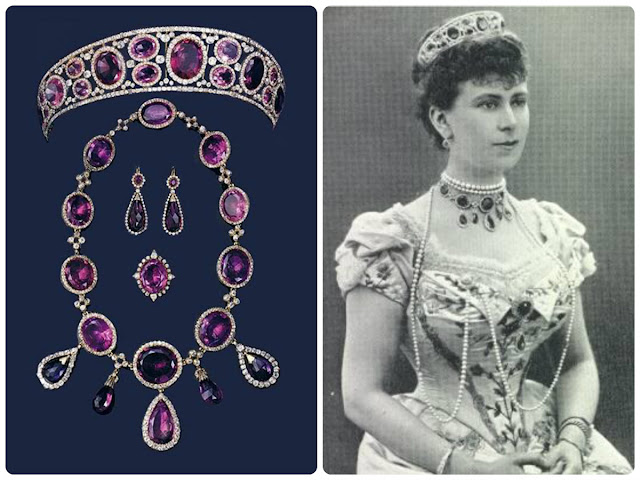 While complex parures involving multiple bracelets, dual diadems, rings, necklaces, and brooches were almost entirely the province of royalty, there were plenty of less extravagant versions of them that even those in the middle class could aspire to.  And as the 1800s moved on even versions done in gold plate with paste stones developed.
With the beginning of the 20th century, and the subsequent beginning of the relaxation of social rules that came along with WWI, the creation and use of parures of gems faded out altogether. Such formality didn't fit the race to modernity that we embarked on. All that remains is the matching set of earrings and necklace, which exists at every price level.
Now in the 21st century we seem far more interested in not matching things than we are in doing the perfect coordination thing.  I suspect that has a lot to do with the vast increase in our access to the world's different cultures, and all they produce.
Who knows where we will decide to go next? Perhaps one day we will need the reassurance of a perfectly matched set of jewels to make us feel secure again.
Posted by Paul G. Ellis at 7:53 AM