Welcome one, and welcome all to this week's version of wandering through my brain.  I hope you enjoy the journey, it's an interesting mix this week if I do say so myself, and I believe that I just did. 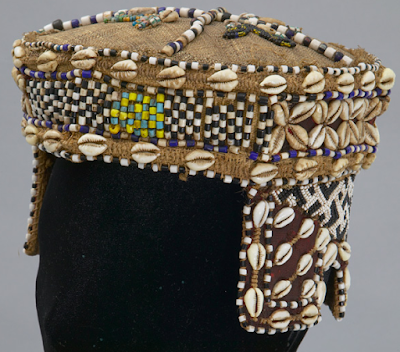 This crown is from Africa and was made in the early part of the 20th century.  Apart from it's undeniable beauty, it speaks to me about the vast and varied ways we have of attempting to elevate ourselves, and create a sense of greater worthiness.  If I hadn't told you this was a crown those of you with no connection to African cultures might have not seen it that way, inculturated as we are about what a crown should look like to western eyes.  Nonetheless this object is meant to convey that the wearer is special and important as much as it's cousins in other places.  We take those things that have meaning for us and place them upon our brows as a symbol to all who see us about our significance in the world. 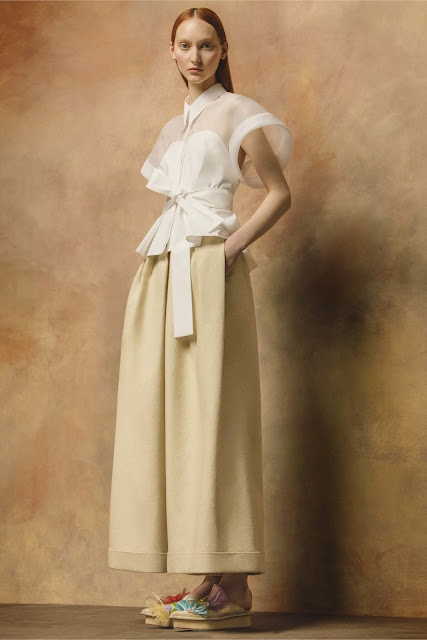 Scale and proportion.  These two factors contribute so much to what we see and understand about the apparel statements that we see each day.  Too loose, too tight, too long, too short, or any place within those bounds connects for us in some way and we assign meanings that shift depending on where in those continuuae they fall.  This Delpozo ensemble is a wonderful example of how proportion and scale change our understanding.  Look at this and imagine the same pieces shrunk closer to the body.  Or envision them even more grandly large than they are now.  What happens in your mind when you think of them that way?  How do your feelings about them alter? 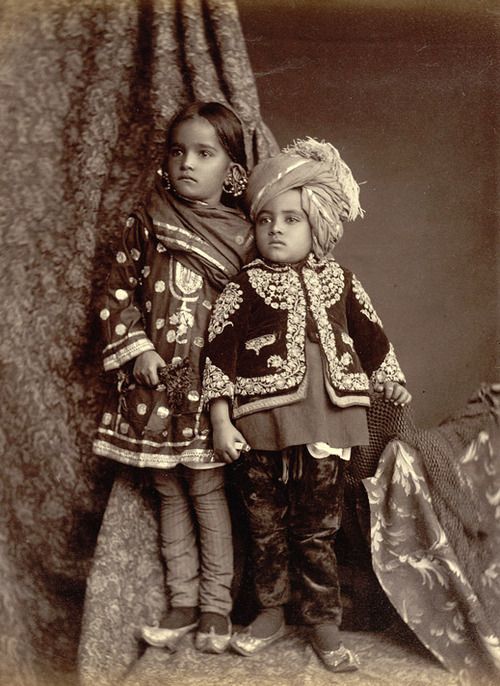 In every culture the world over, part of the raising of children is our largely wordless training of them with apparel for the roles they will fill as adults in society.  These two Kashmiri children, clearly of a wealthy if not noble family, are both already being indoctrinated into the rules and regulations they will be expected to obey, and eventually pass to their children.  We all do this same thing.  Any time a little girl is placed in a pink dress and mary janes, or a little boy gets a miniature denim jacket and cowboy boots we are preserving and forwarding cultural norms of expected behavior and appearance. 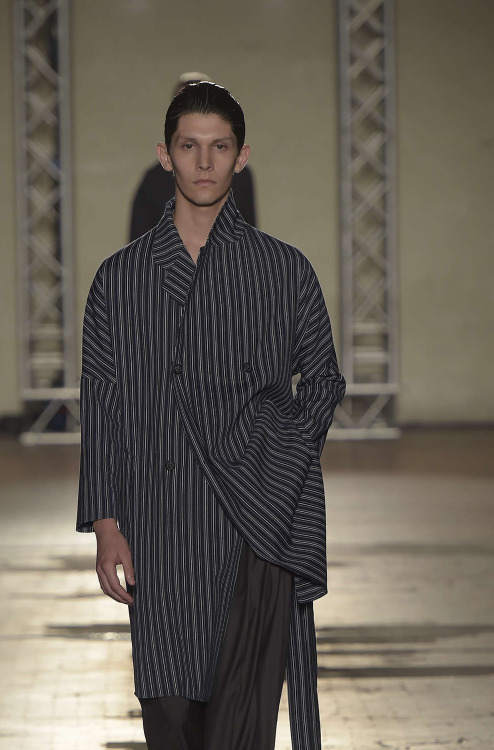 Easiness.  I am loving the influx of menswear options that have this more relaxed and approachable feel.  Not only do clothes like this speak more effectively to our changing world, and our changing views of men, but they specifically lack the kind of alpha male machismo that so often gets produced.  We seem to be learning at last that there are many sorts of men, and that they are all worthy in their own ways.  Is this the physical manifestation of our greater understanding of ourselves?  I believe that it is.   Lucio Vanotti S/S 2017. 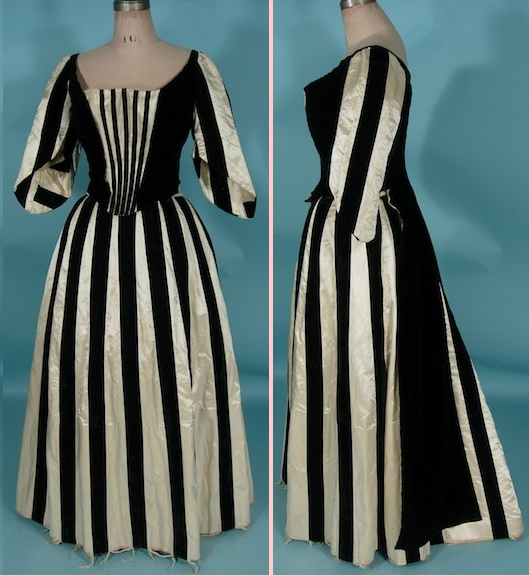 One of the interesting things about old garments is trying to puzzle out their  purpose and meaning.  This gown is from 1900.  Is it a stage costume or a piece of fancy dress?  Is it a starkly modern looking piece that was worn by someone with very advanced tastes?  Sadly I have not been able to find a larger version of this, so getting closer to pick out details like the possibility of other trimmings that have been removed laving stitch marks is not available.  I would, myself think this most likely a piece of fancy dress, or a stage costume.  The sleeves are unlined, which in a real formal dress they would be.  Though the silhouette is essentially correct for the time the severity of it, and its complete lack of trimming call things into question.  I find mysteries like this one fascinating. 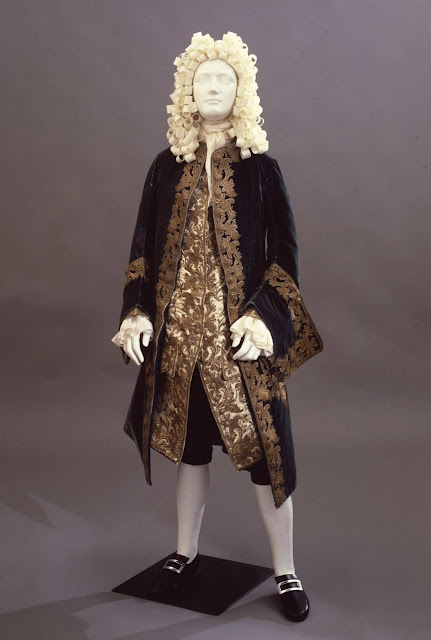 This gentleman's suit is from the early part of the 1700s, about 1720.  First of all, that it survives complete is unusual. Second it gives us a look at the beginning of the concept of the three piece suit which we still have today.  As well, we get to see how much the suit will shift in size and shape in just 80 years.  By 1800 the breeches will hit on or above the knee and be skin tight. The waistcoat will break at the natural waist and have no skirts at all.  The coat will be very trimly cut, with coat fronts that curve backwards to create what became the swallow tailed look that was so very popular for a long time.  And the sleeves of the coat would be cut very close to the form, while shrinking the cuffs down to nothing.  Finally, the coat, and waistcoat would develop a high standing collar, eventually so high as to impede the movement of the head from side to side. 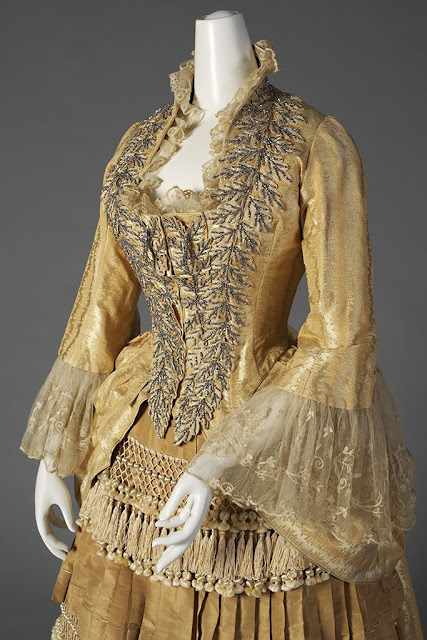 While this detail image is of a dress from 1880, not 1900 as the earlier one is, this image lets us see what a dress of that general time would look like in terms of how much decoration, and what sort of decoration was normal.  The style of this dress is a recollection of the 1700s with its huge lace cuffs.  The extensive and complex applique beadwork and the elaborate passementerie fringe are high end, but even a middle class or working class woman would have some sort of trim on her clothing, even if it was just decorative bands of the same fabric as the dress. 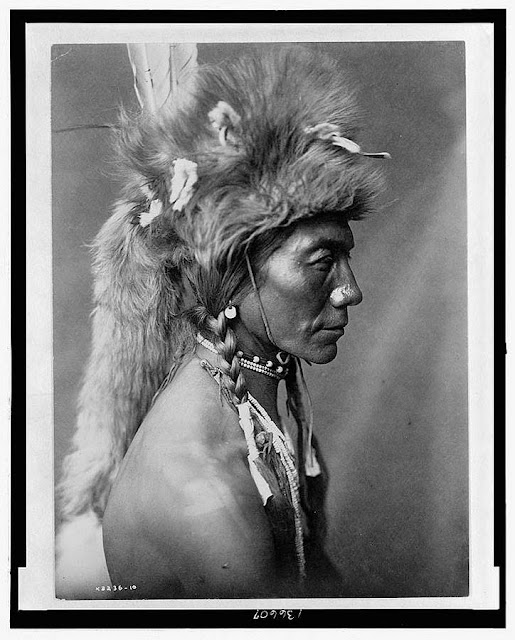 The endless ways in which we enhance ourselves, creating a story visual that can be read at a distance by those who understand the words they see is a fascination for me that never palls.  When I see something like this portrait of a Piegan man taken in 1900, it makes me want to know what all the things I'm seeing on him mean within his culture so that I can understand the story he is relating to us.  It is one of the many complexities of the Attire language that within its larger structure there are hundreds of dialects, so a garment can have multiple different meanings depending of the culture it is being used in.  Whew. 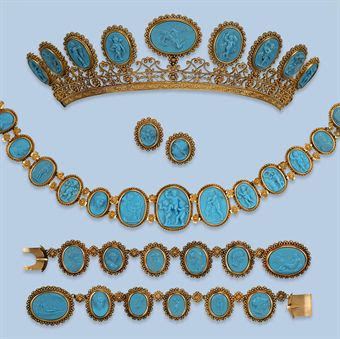 When I did my post about parures of jewelry a week or so back I mentioned that they existed at many price levels, but it seems that the lower end ones are the ones that did not survive for us to look at.  Well, here is an exception to that.  This parure of plated brass has pressed blue glass cameos of philosophers and gods within borders of cannetille work and filigree mounts.  It is of French manufacture and comes from 1800, when all things relating to ancient Greece and Rome were having an immense impact.  The fact that this is not a precious stone set points out that even women of middle means were possessors of parures.  We are lucky this survives. 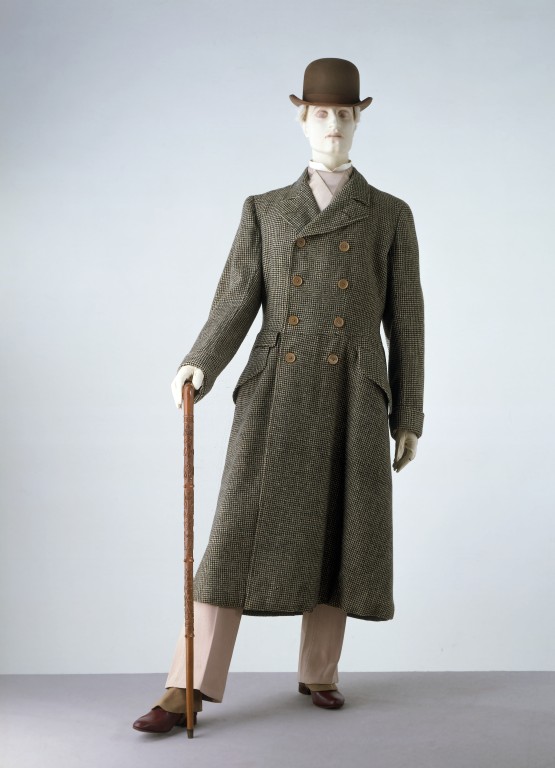 When the automobile emerged the Attire language also created something new, the driving coat.  At first cars were not enclosed and roads not paved, so driving was a dusty business at very least, plus driving in an open car in anything other than summer could be mighty chilly, so covering up served two purposes.  What distinguishes the driving coat from any other one was the cut.  Driving coats were more loosely fitted than a normal town coat, since the gentleman might have to get out and crank the motor, or have to perform some other maintenance function while out and about.  This example is a wool tweed double breasted, from about 1906. 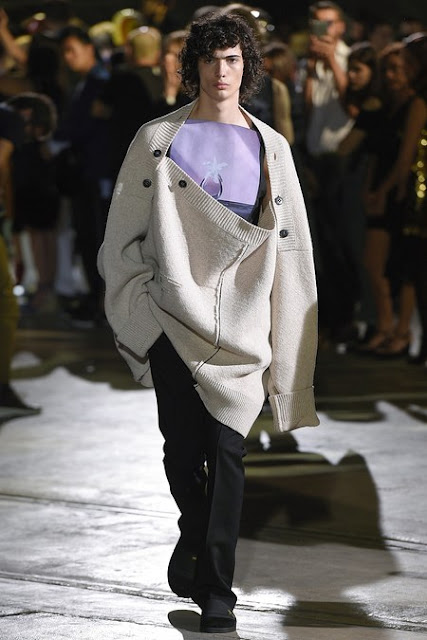 When  a designer presents an effort like this, I often scratch my head.  What are they thinking of?  What are we supposed to glean from this?  Are we actually supposed to attempt moving about in the real world in something that makes motion so problematic?  Or, as I suspect is the case here, are we to look at this idea and scale it down to human proportions?  When I look at this clownishly enormous sweater, I first realize it has no validity in the real world as it is presented.  But looking at the design itself, with its row of buttons across the shoulder line, I see the worthiness of it. reduce the scale to realistic levels and this becomes a great notion. 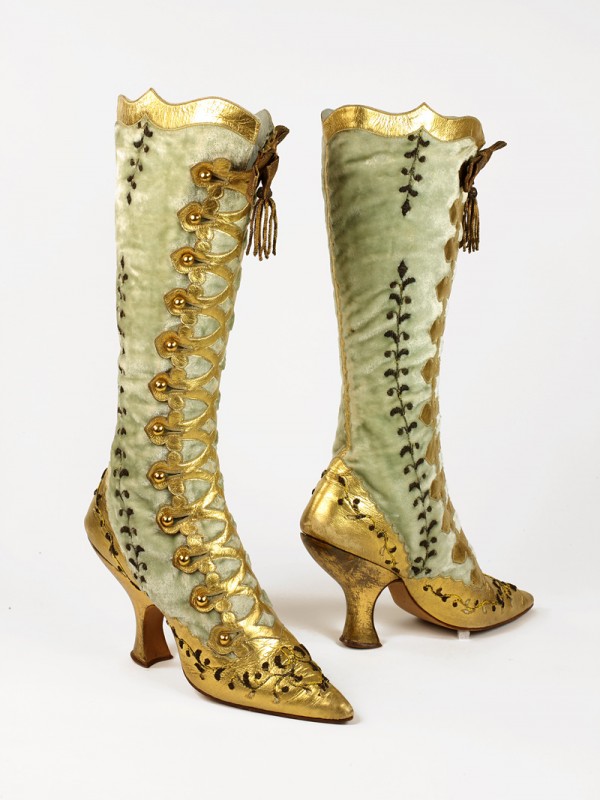 As a final entry this week a pair of the most over the top boots I've ever seen from this period, the 1890s. These twelve button boots are made of pale green silk velvet and gold kidskin.  Both the velvet and the kid are embroidered with vines in dark green and the center tops have metal mesh bows with tassels.  Such extreme footwear was most likely for an actress, dancer or courtesan, since ladies of supposed breeding would have thought these much too much.  Whoever they were for though, they are simply delicious to gaze upon. They make me smile, and I'm glad they are still here so we can all take a peek.

Well that wraps up this week's round up of randomness.  Go enjoy yourselves, and for anyone celebrating Gay Pride, Happy Pride Weekend!