Good Morning All!
It feels great to be back to work here.  And I have some terrific things to share this week for your delectation and entertainment.
So, no shilly-shallying.
Onward! 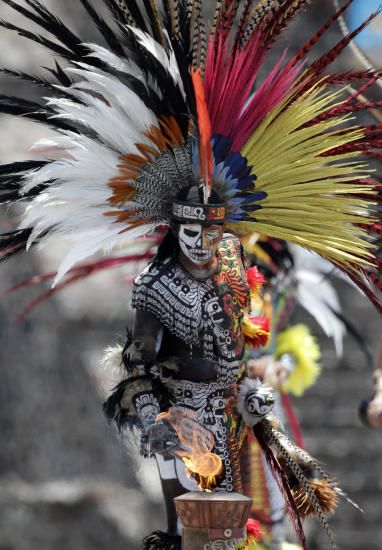 This is obviously a contemporary costume, not a ritual one.  But it struck me quite hard when I saw it.  It embodies so much of our innate needs in one package that I found it breathtaking.  It is at one go a celebration of life, an acknowledgment of death, a version of human sexuality, a bonding to our animal selves, and a towering example of our search for the beautiful and the extraordinary.  What especially makes me smile, looking at this, is that we do these things routinely in our daily lives, without really knowing it.  All these things express in our apparel and behaviors.  So to see it all melded together into one supreme vision of the human experience is awesome in the best sense. 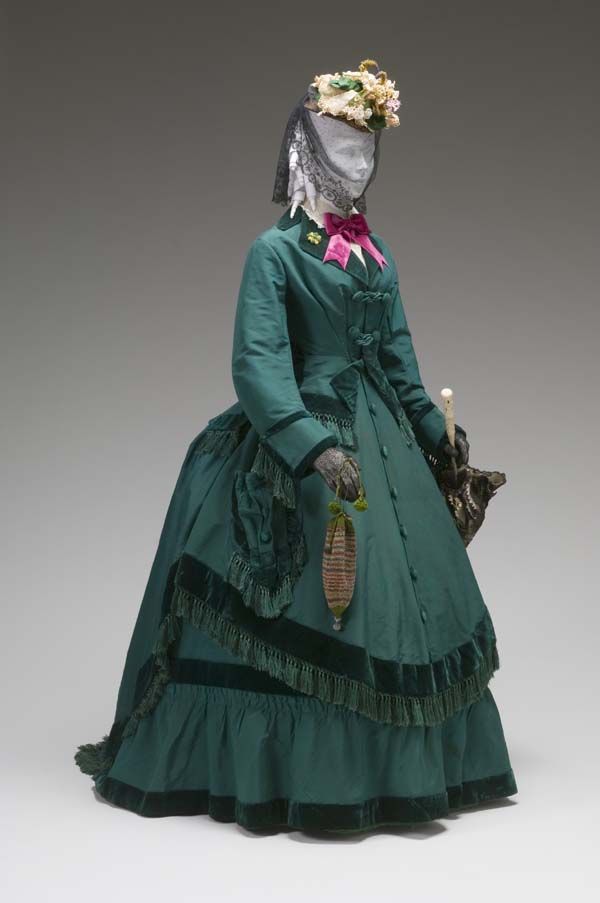 It always makes me very happy when an antique piece of clothing gets displayed fully, and correctly accessorized, so that we can see as fully as possible the garments as they were meant to relate to each other.  This Afternoon/visiting costume is from 1870, and was made in Charlotte, North Carolina. The less elaborate nature of this visiting costume is entirely appropriate to the more conservative style of dress favored in the American south at the time. Each of the accessories chosen for this display contributes to a vision of what a well brought up woman would have worn while out and about.  As a side note, the dress carries a detail which would gain increasing popularity over time during the latter half of the 1800s.  The skirt bears a huge, and heavily decorated exterior pocket on one side, which is visible under the manikin's right arm. So, the dress makes a nod to super-fashionable style, without going too far. 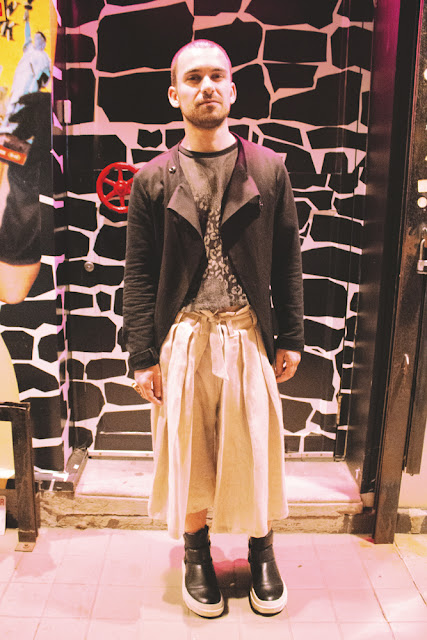 As has been the case for some time now, the place where the most advanced style exists is not really the runways of the world, but on the backs of real people with the moxie and vision to create themselves their own visual vocabulary.  Combine this with our access to apparel choices with origins all over the world and we get combinations like this emerging.  This is, to my eye, a wonderful intersection of tradition and modernity.  And of course I love that it challenges us a bit about our preconceptions.  Bravo, mister. 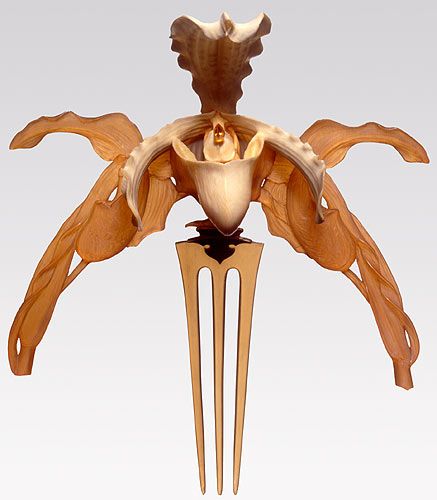 Time for something just plain lovely.  Rene' Lalique was, and is one of the most influential artist/designers to appear in the last century plus.  His passion for, and understanding of the Art Nouveau movement helped immensely in its gaining such popularity.  His effect has been strong enough to aid in carrying the movement's appeal forward for another 100 years.  This glass and ceramic hair comb was made in 1900, and it is every bit as gasp worthy now as the day it was completed.  The perfectly rendered orchid bloom is flanked with leaves that, though they reference the natural, are presented in a way that is true to the Nouveau aesthetic. 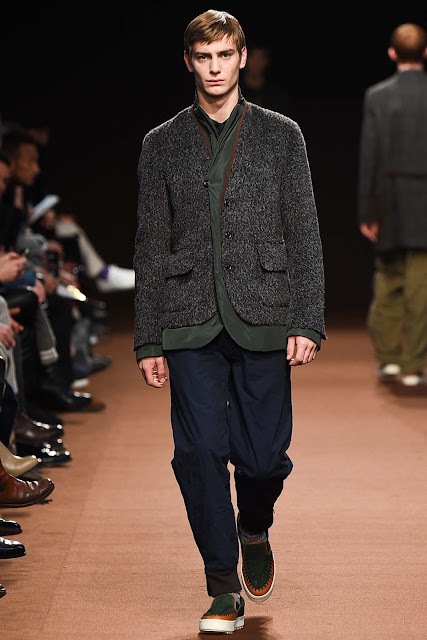 Sometimes the shifts that occur that are small delight me.  This ensemble from Kolor is one such.  It's a gentle, baby steps method of chivvying us along towards new ways of thinking of men's dress.  Superficially it seems little is going on.  The point of change is in the jacket with its faux layers.  The more traditional shape of the outer surface has been shrunk a bit, allowing the under-layer to emerge.  Both are collarless.  It's almost as if the tweed layer is a skin being outgrown, and we are seeing the more colorful new skin peeping out, giving us a hint of what is to come.  Perhaps I read far too much into things, I can't say for sure.  This is what I see,w hen I look at this, change happening, in tiny increments. 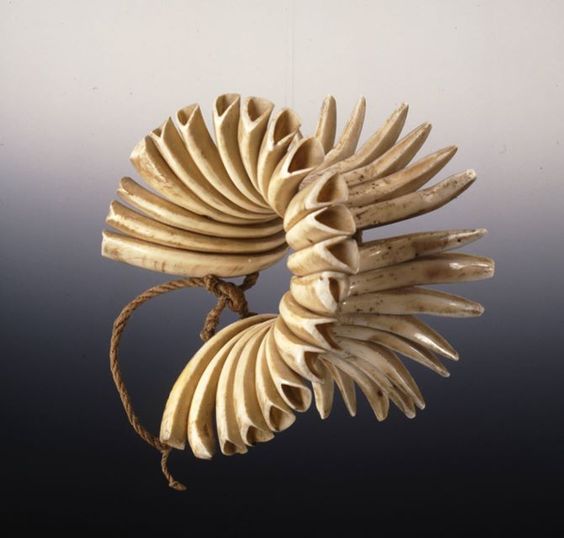 This is a wonderful example of how the simplest of materials, used in a straightforward manner can create wonderful rhythm, and great beauty.  This is a boar tusk bracelet from Hawaii.  It was created in the mid 1700s, and as an object it has great visual power coming from the repeating curves of the tusks. If we were to see this exact shape rendered in manufactured materials, like some kind of metal, this would appear fiercely edgy and modern. As it stands it is also a testimonial to whoever was a good enough hunter to gather these together.  As well, it is another example of our need to touch the animal world, and take its power to us. 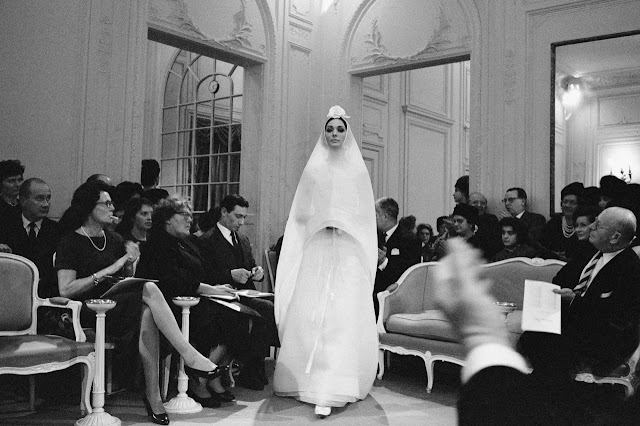 In 1961 the house of Dior presented this astonishing wedding dress called Hymenee'.  It is monastically spare, and renders the model into some sort of virgin votary.  Only her pronounced eye make up makes us question it.  What also appeals to me here is this glimpse at how a couture house used to present its clothes.  Crowded into small rooms at the design house itself, clients, fashion writers, and buyers are all jammed together with the models having so little room that the viewers are routinely brushed by the clothes.  No special lighting, no props, no outrageous runway styling.  Simply the clothes being given front and center.  There is a great deal to recommend this method, free of theatrical distractions. 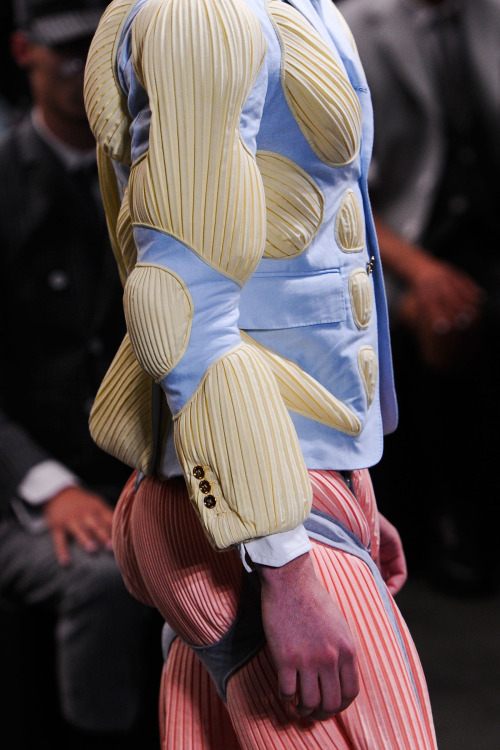 Avant Garde designer Thom Browne is nothing if not bold. This detail from his 2015 Menswear collection for Spring and Summer is as compelling as it is disturbing.  Not many folks would be willing to walk the streets looking like their skin had been peeled from them.  But as a potent commentary on our natures it's hard to ignore.  Part of what I love here is that the pleated material is one we would normally see in some floaty elegant evening dress.  Constrained and padded as it is, it becomes muscle tissue.  That this effort is also rendered in pastels makes it that much more a statement.  Strange, tough to look at, and yet, intriguing because it forces us to remember who and what we really are. 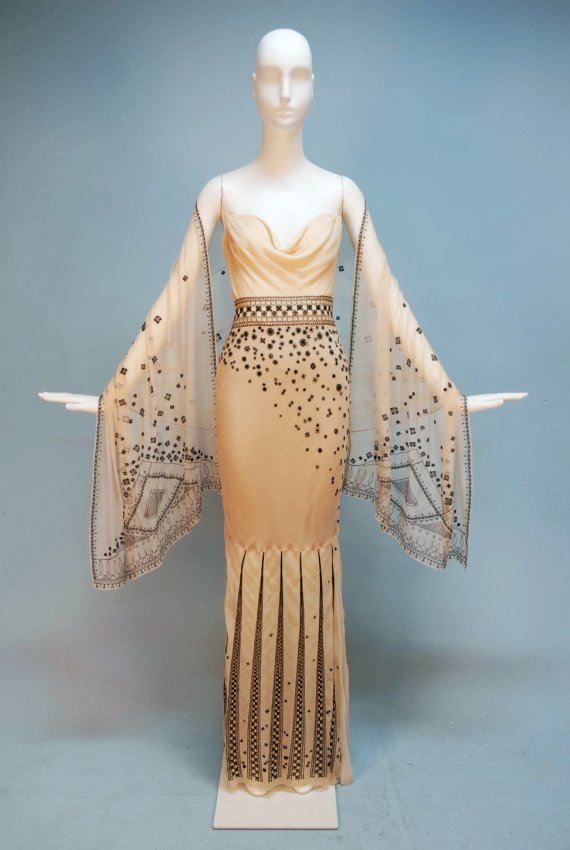 From the disturbing, to the divinely lovely. Jeanne Lanvin designed this superb evening ensemble in the 1930s.  Made of pale gold chiffon that has been perfectly embroidered with motifs drawn from classical cultures, this is a marvelous example of the pared down, but very grown up sexiness that had become the norm by the 30s.  There was a knowing quality to the manner in which women dressed that implied a greater knowledge of both the world, and of sexuality than had been allowable only a few decades before.  Also the sense of effortlessness that the bias style presented was one that women were very happy to embrace after lifetimes of constriction.  These were clothes for women who were grown ups in every sense. 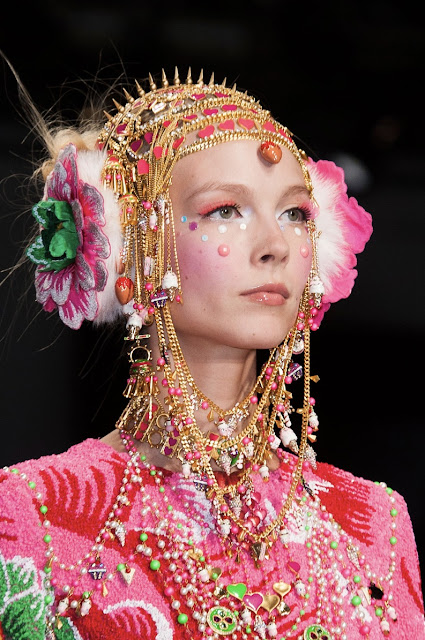 Sometimes exuberance is its own best reward.  This detail of a Manish Arora ensemble from 2014 is super saturated with color and detail, and yet it still manages to serve the wearer, not the other way around.  Sure, this is a paid professional, so she understands what it takes to shine forth within such complexities.  That said, nothing keeps any of us from doing similarly, but our own lack of belief that we can.  Somehow our eyes are drawn, regardless of all that is going on, to the model's face and eyes.  It can be so with us too.  Believing in oneself, makes it so. 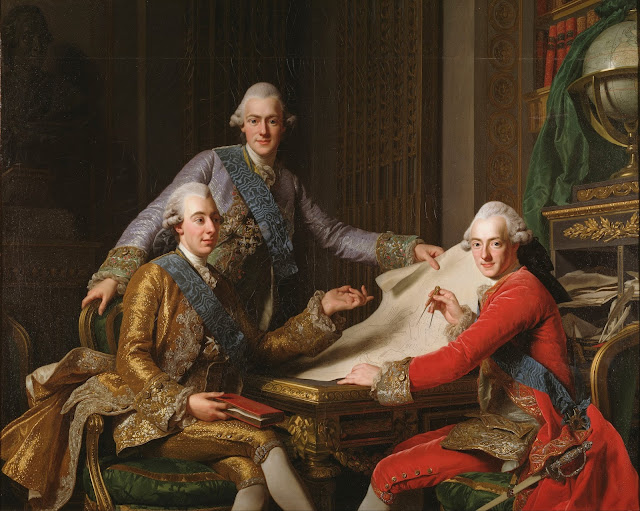 In 1771 painter Alexander Roslin did this portrait of King Gustave III of Sweden and his brothers.  What came up for me was the sumptuousness of the textiles.  The kinds of fabrics available to the upper echelons of society were a kind of craft that not only is far more rare, but virtually doesn't exist any longer.  The level of attention to detail, the density of weave, and the quality of the base threads was at a level we no longer feel we need.  Even within the couture, fabric quality is not as high as it was.  We no longer think of materials as something we would wish to survive for multiple decades.  Our disposable culture, and our constant need for the new makes the idea unpalatable.  But oh, how glorious these materials were.  (I sigh quietly). 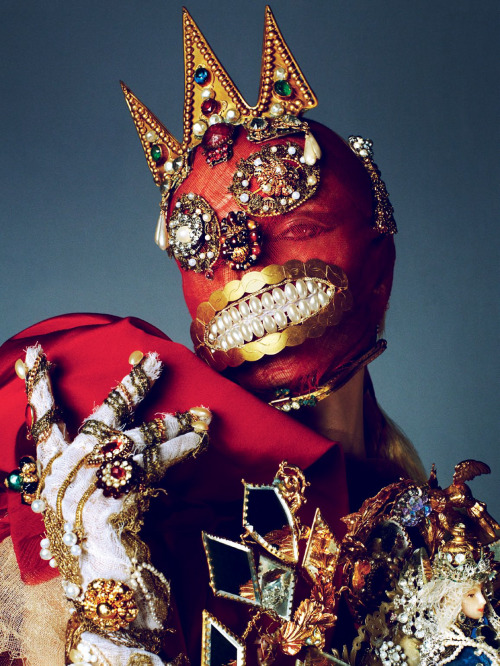 As a finish to this week's scatter another something both compelling and disturbing.  This image comes from the April 2015 issue of Vogue Russia.  What is finally being said here is somewhat confusing.  The outrageous splendor of all the masses of jewelry is offset by the model being nearly entirely inundated by it.  And with the placement of pieces over her face creating some bizarre parody of a human expression it becomes darkly menacing.  When we finally do see one real human eye dimly visible through a layer of red chiffon are we seeing the emergence from captivity, or a willing  acquiescence to luxury in all its forms?  Whatever the intent of the image, beyond hawking lavish costume jewelry, we are given the opportunity to see more if we wish to, and perhaps gain another layer of understanding about us complex humans.

That's it for this week, folks!
Have an amazing weekend.
Posted by Paul G. Ellis at 4:58 AM