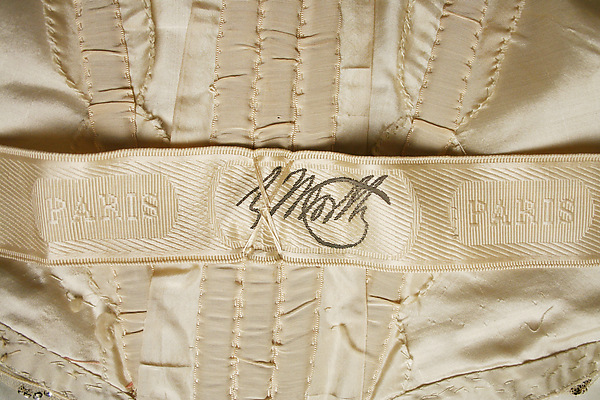 It is a thing un-repeated in couture, and somehow fitting, the the first couture house would be the only one to pass the helm on to the son of the designer after his passing.  When Charles Frederick Worth died on March 10, 1895, the House of Worth was taken up by his two sons, Jean Phillipe, and Gaston-Lucien.  Jean Phillipe became the new head designer, while Gaston handled the business end of the enterprise.  During their tenancy, which ended in 1924 with the death of Gaston, a grandson, Jacques took over as designer, eventually handing the business to great grandson, Jean-Charles, who saw it through till his retirement in 1952, 2 years after the house had been purchased by a rival concern, the House of Paquin.
As a designer, Jean Phillipe had every bit as cultivated and grand a vision as his father had, and an even more refined eye for detail.  The work done under his hand is some of the most sumptuous the ateliers ever turned out, and some of it's boldest, most extravagant gestures, were designed by him.
This magnificent, and beautifully balanced ball gown is a perfect example of his taste and skill.  The house employed two dominant methods of design. One was to employ solid color materials and then embellish them with abandon, the other was to utilize hugely scaled woven patterns, keeping other decorative elements to a lower level.  Here is the first of those recurring ideas, rendered in an ideal way. 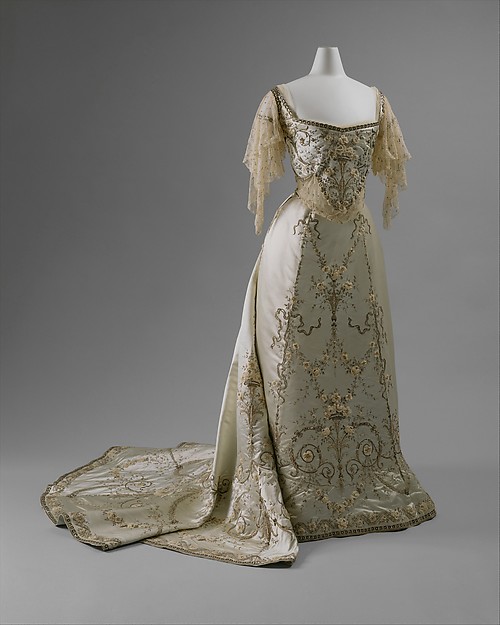 Heavy Duchesse satin forms the body of the dress. It is decorated over the majority of its surface with rococo inspired forms of urns, flowers, vines and scrolls.  The placement of the embroidery work performs another few functions beyond the decorative. The ascending verticals disguise all the seam lines of the 7 paneled skirt, and the lines also lead the eye upwards, while fooling us a bit about the wearer's shape.  Also, leaving the sides at the hip line mostly free of decoration allows our minds to edit that area out, helping the illusion that the lady's figure is narrower of waist than it actually is. 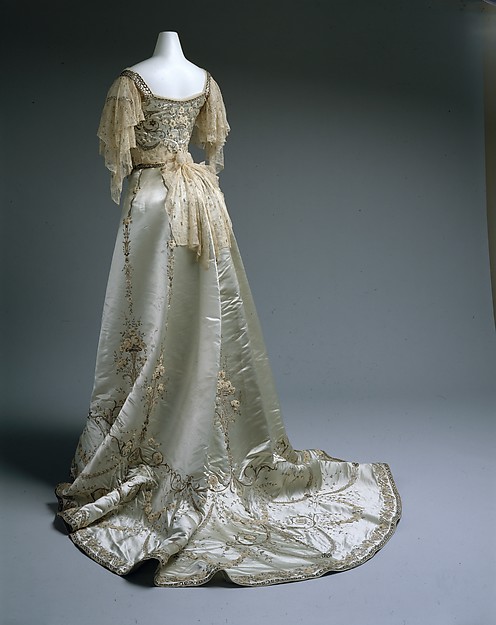 The decorative work itself is amazing.  Metallic threads and cording have been couched onto the surface, creating the main design elements of vines and scrolls. Ivory colored marquisette is used to create the three dimensional petals of the flowers that arc out of the various trumpet shaped urns in the design. Finally, silver gilt beads and paste gem stones add final sparkling notes to the entirety. 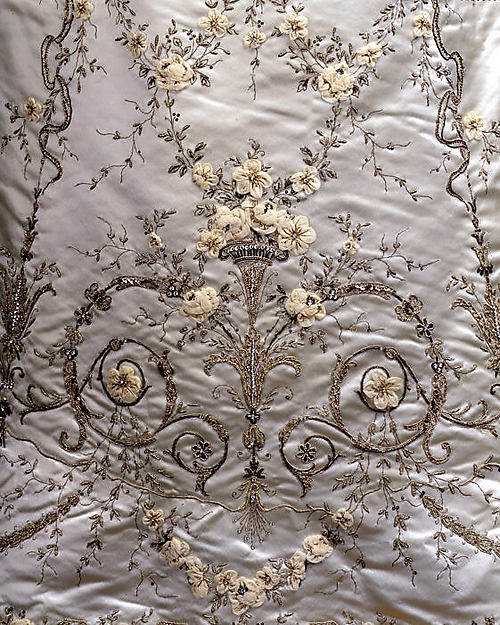 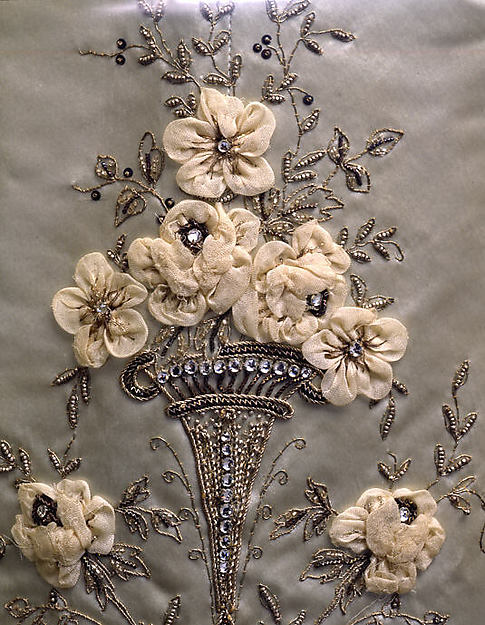 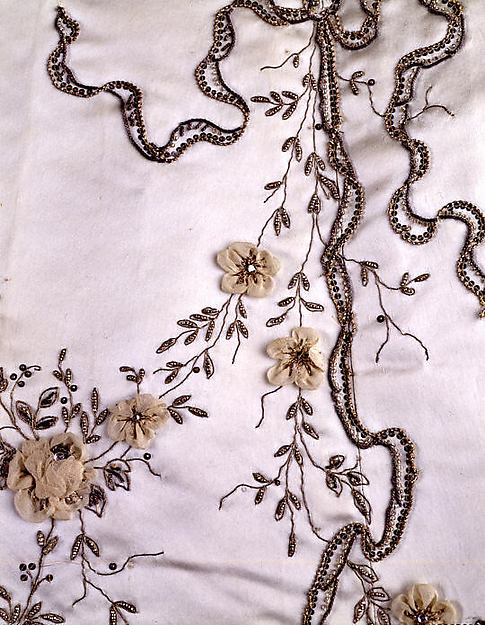 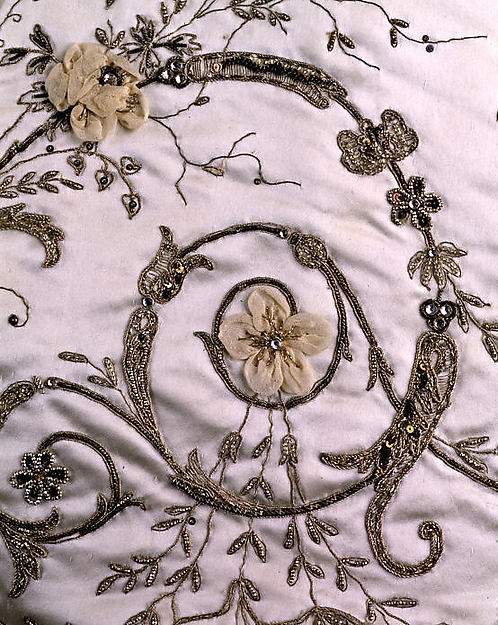 The bodice is densely worked, which is natural considering that the intent here is to draw the viewer's eye eventually to the face. The corsage is as low and wide as propriety would allow at the time, and the sleeves are of blonde lace, hung en point. This must have been glorious to see gliding about a dance floor that was lit by candles, reflected in crystal chandeliers.
As a final thought,  the garment number label lists 66970, which should give you a good idea of just how well regarded Worth was at the time.  Women of means from the world over patronized the House.  To have clothing from Worth, was a supreme visual gesture. 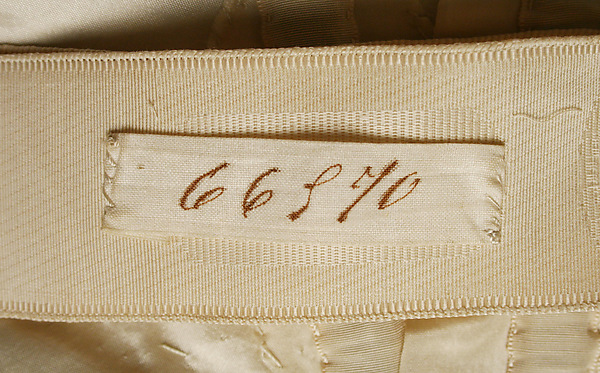 With grateful thanks to the Metropolitan Museum of New York
Posted by Paul G. Ellis at 3:48 AM