I have posted about the robe a changeant, also known as a robe a transformation before.  This one is particularly fine, and since they rarely survive intact it bears some looking at.  They so often don't come down to us because where dress bodices were quite difficult to remake into a newer fashion, particularly considering how radically shapes altered in the latter half of the 1800s, the skirts of these garments could be changed up to the current taste with much greater ease.  So, we are fortunate to see this set of four pieces come to us unaltered from its original state. 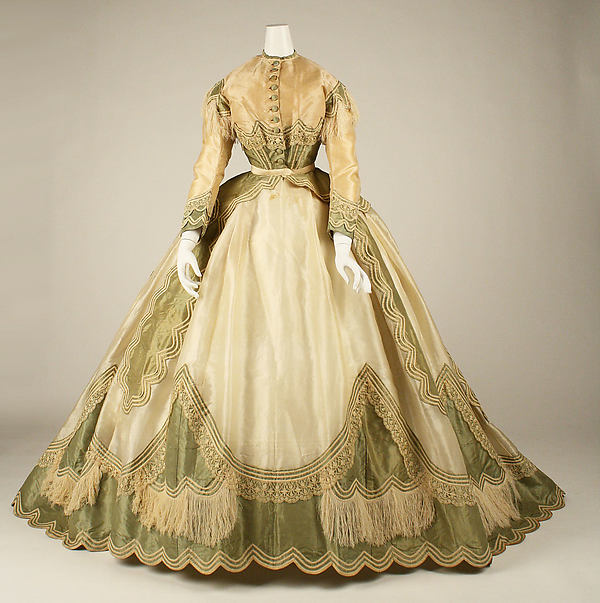 By 1865 when this was conceived skirts had widened to the greatest dimensions possible, even with the advent of the cage crinoline. This dress employs nearly all the girth technically possible.  That said, it is constructed of lightweight silks. One is an olivine China silk, the other a translucent pale cream silk.  The trimmings are of hand made beige lace that looks to be a simple Cluny pattern, extensively used fringes, and multiple scalloped rows of bias covered cord. 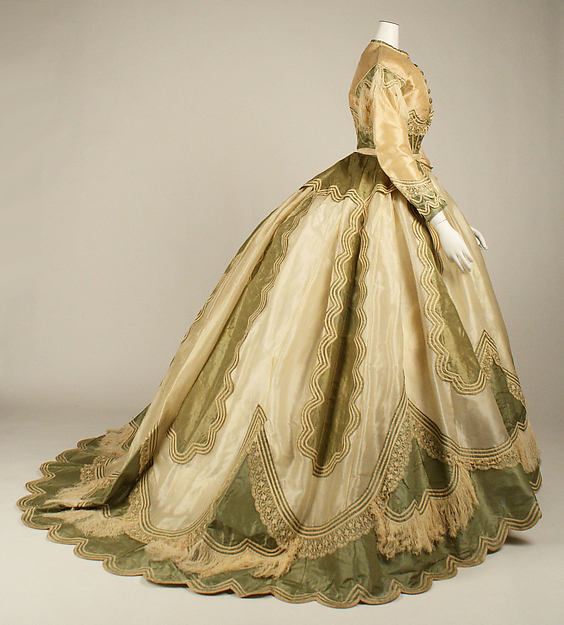 The day bodice has the uniformly close fit common to the mid 1860s. The neckline is kept simple and nearly unadorned, though it is entirely possible that this was worn occasionally with a detachable lace collar, just to change things a bit further.  The buttons are covered in the olivine silk and the majority of the bodice is made of a light tan silk not used in the skirt, but still harmonizing well.  Part of what makes this set unusual is the survival with it of a small matching shawl most likely meant to be worn with the day bodice, though it could have also been pressed into use for the evening as a wrap. 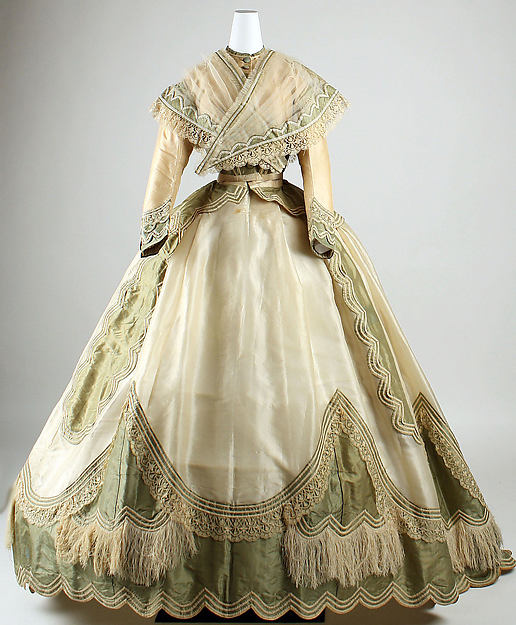 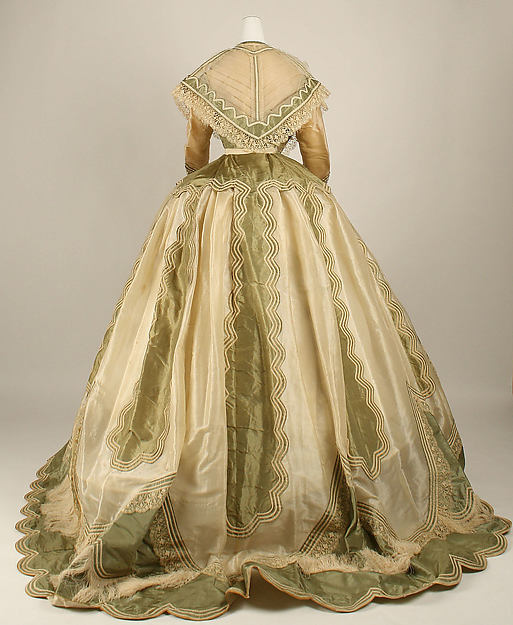 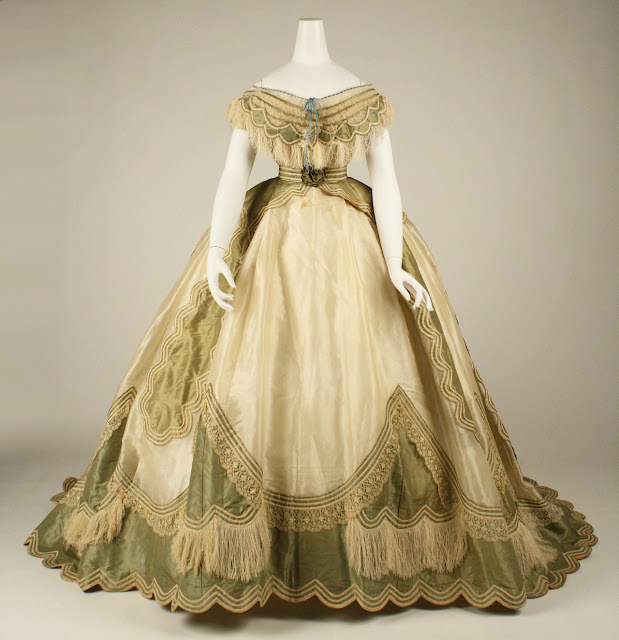 The evening bodice, which would have been appropriate for all but the most extremely formal of occasions has the broad, low, nearly horizontal neckline considered a requirement for evening dress.  The decorations of it are so many that the short body of the bodice is entirely concealed under scalloped rows, shirred silk and fringe.  This was a wise decision, however since it gives visual balance to the whole composition, and helps bring the viewer's eye up towards the face. 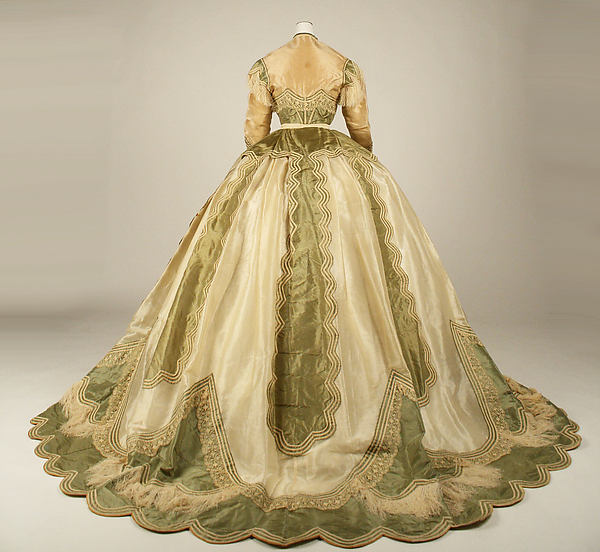 Now, about that skirt.  The skirt alone is a masterwork of the dressmaker's art.  Though in some of these images it appears to be a single layer it is actually two.  The underskirt has its lower half made up in the olivine silk and edged with a triple row of scalloped bias cord. The upper portion, which is entirely concealed may be made up in the same light tan silk as the day bodice, but we cannot be sure, (and the information from the Met does not include this).  Only in one of these images can you make out where the green begins and the tan ends. 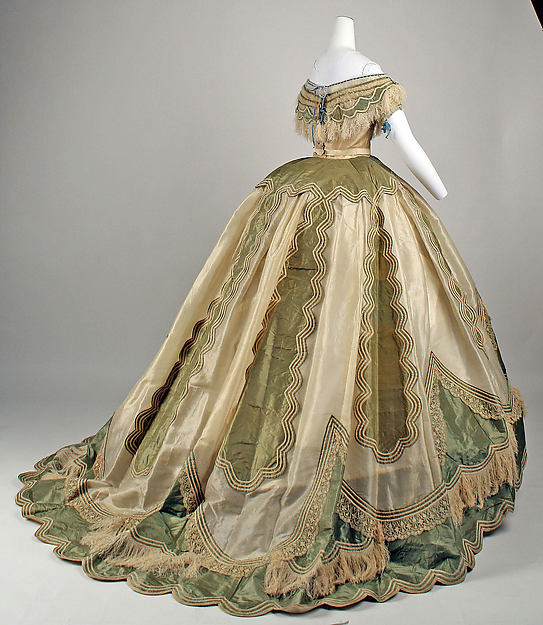 It is the overskirt which is doing all the major work here.  It is made up of the translucent cream silk with huge insertions of the green that are scallop edged as the hem is.  The overskirt had huge deep arcs that are finished with the cluny lace. The interiors of each arc separation are filled with more of the green, this time finished with long tan fringes. 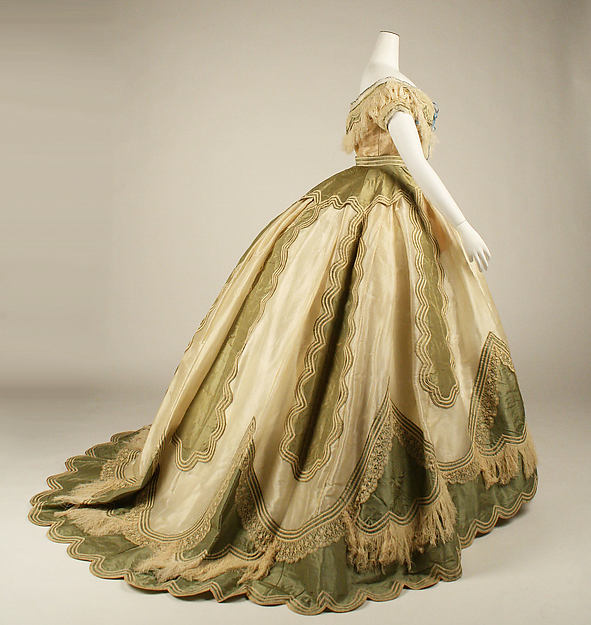 Weeks of patient hand labor were required just to complete the overskirt. Even with the invention of the sewing machine the majority of what you see here would ahve been hand done. In fact, at this early stage in the existence of the sewing machine many upper class folk thought machine assembly was declasse' and staunchly avoided it.  So it is most likely that this ensemble has no machine work in it at all. 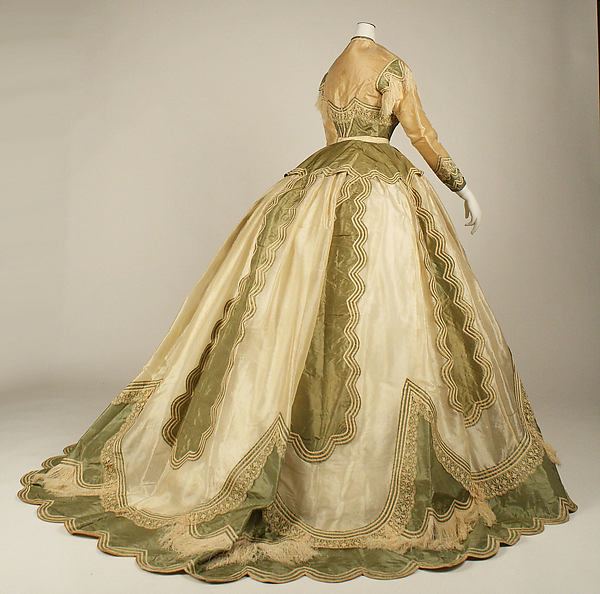 As a final point, this group of clothes points to a time and place when class distinction was uppermost in most people's minds.  The sheer complexity of this dress and its parts is meant to convey in loud, clear voice the standing of its wearer socially and economically.  Donning this must have helped instill a sense of the rightness of things to its wearer.  At least, so I suppose. 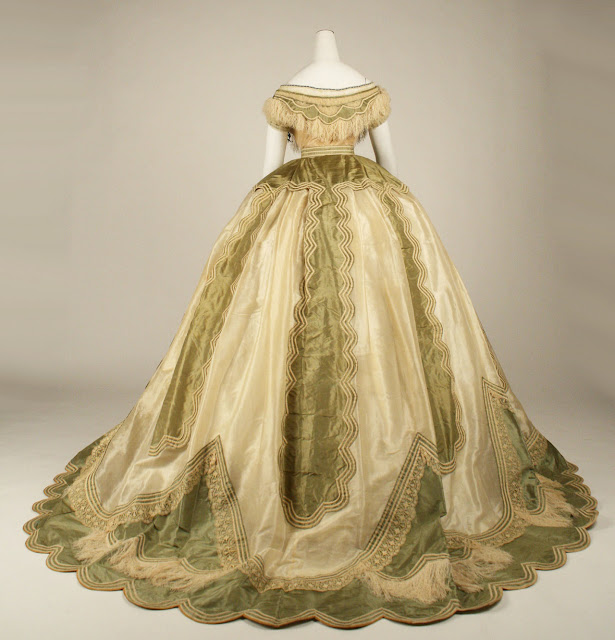 With grateful thanks to the Metropolitan Museum of New York.
Posted by Paul G. Ellis at 6:43 AM