Good morning, Class.
Guess what time it is?
That's right, it's Scattertime!

So let's just dive right in, shall we? 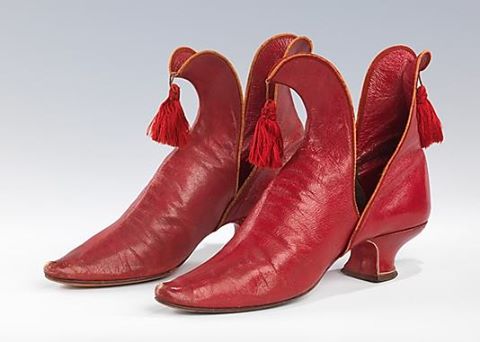 These are house slippers for a lady of fashion. They were made by the company Rosenblum's in the 1890s.  What appeals to me about them is that they are so playful.  When we think of the Victorian period we tend to think of it as a serious, a solid time. We forget that within those social rules and regulations of which we have heard so much there was still room for play.  These delightful red kid slippers with their swinging tassels, upturned toes and petal-like openings have a middle eastern sensibility right in line with the passion for exoticism that pervaded a good deal of popular culture references and a lot of art.  I can easily imagine the lady who wore these lounging in her oriental inspired robe with these on, reading a novel while she sips her sherry. 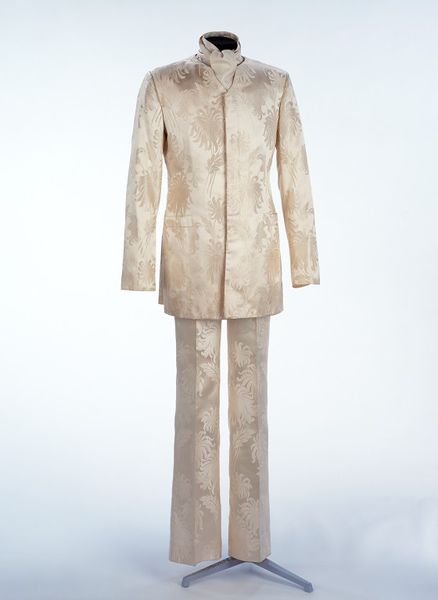 The 1960s was one of the decades where a significant attempt was made to reestablish the concept of the male peacock.  This silk damask Nehru suit is one example of how it was presented.  It really never took off completely, confining itself primarily to the young generation and to entertainers, who always get more license anyway.  Clean lines still dominated, but where it manifested most was in color and textile usage.  Suits appeared in velvets, damasks and brocades. Color became more saturated, and shirts often got worn with scarves or cravats.  Sadly, the Peacock Revolution died out by the later 1970s.  But we seem to be seeing a new round of it, and perhaps this time, with all the changes happening socially it will take more firm root. 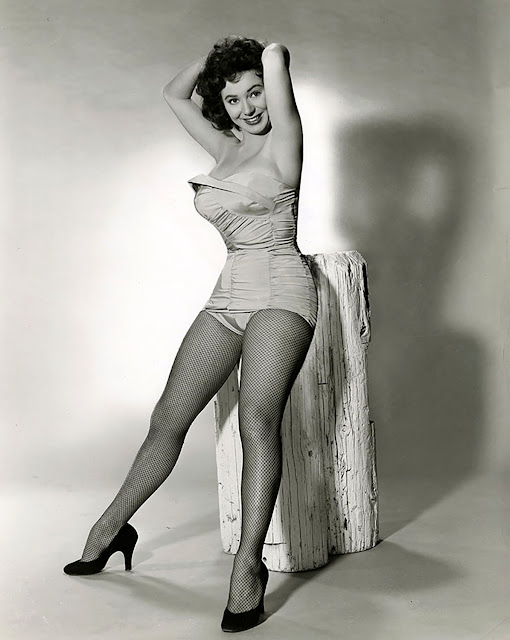 Along with everything else that shifts in the Attire language, our perceptions of beauty change as well.  Over the many thousands of our years what has been considered beautiful in the physical form has changed again and again, and from culture to culture.  This is Meg Myles, who was a popular pin up model, a singer and an actor on screen and daytime television, having several roles in various soap operas.  But she is emblematic of a particular style of body that was very much part of the popular conception of female beauty and sexual allure at the time.  According to our currently held notions, she would be considered overweight, which is absurd of course.  But it's an interesting look at how vastly our notions have changed. 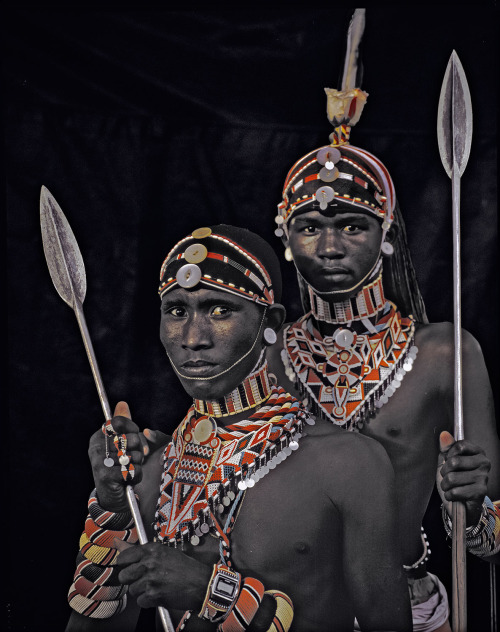 Two warrior men of the Samburu people of Kenya.  One of the things that strikes me here is that we ritualize and glorify our warriors to the degree that we do.  These two men are not just ready to do battle to protect their families and gather food.  They have been visually elevated, venerated by the manner of decorations that they wear. To be fair, I suspect that these ornaments are rather like parade armor, meant to be seen, rather than utilized in real terms.  However the point is still a fair one.  Even in the real world, the utility of clothing meant for combat has a layer of meaning over it that we have given it based on our understanding of physical hazard the wearers undertake, and our appreciation that it is not us doing the fighting. 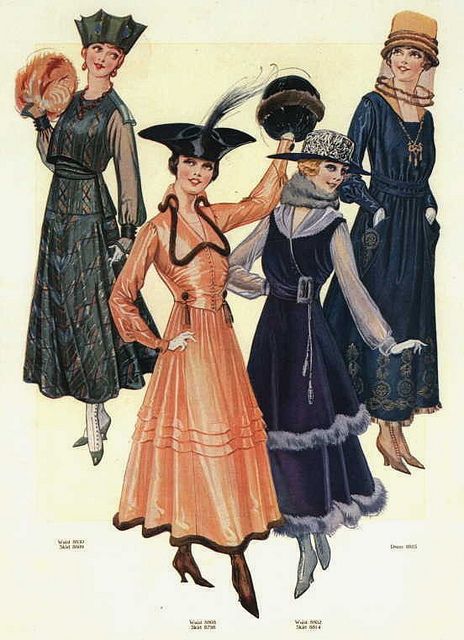 We can look at this fashion plate from 1916 and find it charming in it's relative naivete. But during the time this sort of fashion was put forth a good percentage of Europe, and the US as well was at war.  The perception was that this was needlessly frivolous styling for war time, even though there was little in the way of rationing going on.  Many women came under negative scrutiny for wearing such full skirts and short (to them) hemlines.  It's interesting to note this because the fashions of only 10 years before were far more lavish and in many ways decadent.  Another example of how our society shifts and our perceptions of correctness shift along with it. 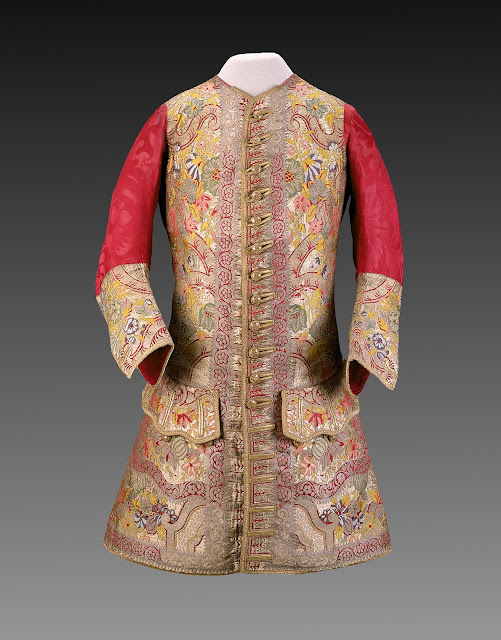 I've posted sleeves waistcoats before. This one is especially fine.  One of the things to distinguish it is that the sleeve fabric and back of the waistcoat is of a very high grade silk material.  Quite often these waistcoats had much plainer stuff in use for the parts of the garment that would remain unseen. Then there is the sheer magnificence of the material which was woven en disposition so that it could be made up exactly as you see here.  It is a polychrome, metallic threaded silk brocade with five colors in addition to gold and silver thread.  The sleeves and back are of a large scale red silk damask. Additionally, the 22 buttons on the waistcoat are of gold. Yikes. 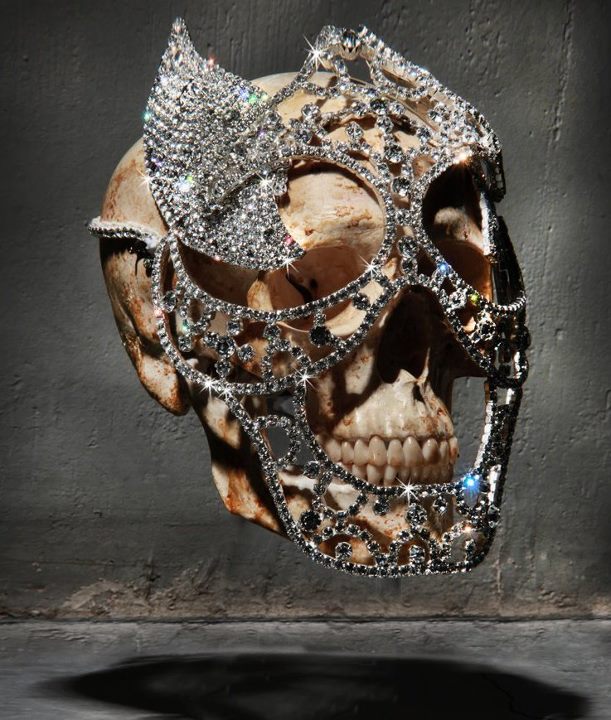 This image set me thinking, as so many things do.  When I saw this I saw first the juxtaposition of the natural and the manufactured.  But then I saw the profundity of how much most of us will endure, how much we will encompass in order to conceal the reality of ourselves from the world. Hidden behind all of our applied glitter we all share the same bones. A good thing to remember in our troubled times.  The other looks just like us within their skin. 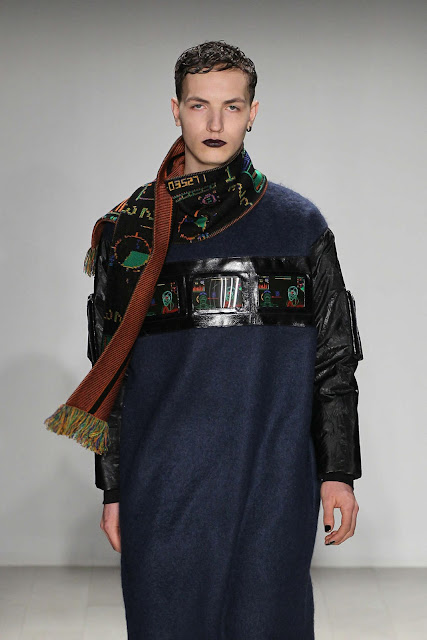 Frankly Sci-Fi, edgy, genderless.  This Atelier Wonder ensemble from 2015 caught my eye.  While I'm not sure it's entirely successful, It's an interesting take on the gender free concept that is spreading slowly in our culture as we explore our own inner world more keenly. I am drawn, however to the combination of textiles in use and the color choices employed.  Something about them appeals to me, though I can't define it for myself, yet. 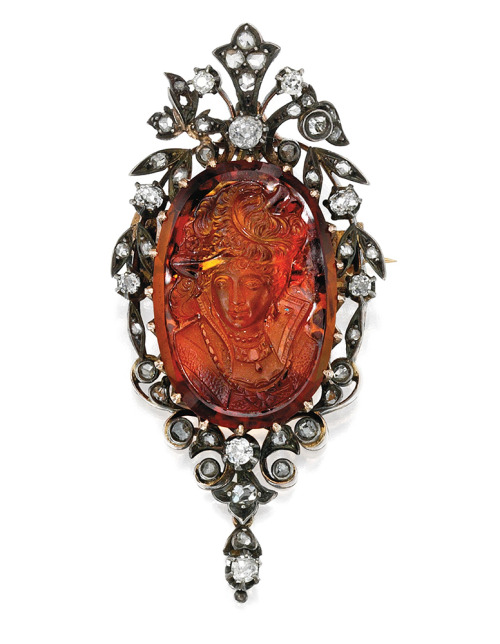 No Scatter would be complete without a bit of sparkle.  This is a Renaissance Revival brooch from the later 1800s.  The central stone is a large citrine of unusually dark color that has been carved into a cameo of a lavishly dressed woman. Little thought has been given to accuracy about the clothing she is depicted with. Especially her forward tilted hat with the ostrich plume nodding over her face.  The frame is oddly simplified from how it would have looked in the Renaissance. And the diamonds that fill out the frame are faceted, which was only just beginning to happen in the 1500s. so the manner of their faceting would be much simpler.  All that said, it's an amazing piece. 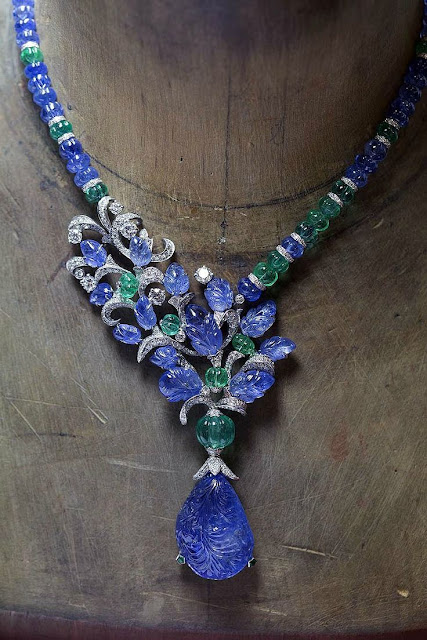 Speaking of carved gemstones,... This necklace, called L'Odyssee' is from Cartier.  It's a platinum mounting with a 50 plus karat sapphire carved with leaves hanging from the center.  There are other sapphires carved as leaves and the rest is carved emerald and sapphire beads.  It's quite the piece of dazzle.  It will be interesting to me to watch as manufactured gems move more and more into usage for jewelry.  It's really an inevitability that they will take over the bulk of jewelry craft.  Does this mean more folks will be able to wear gemstone bling?  Yup.  The days of the nasty diamond business is waning. 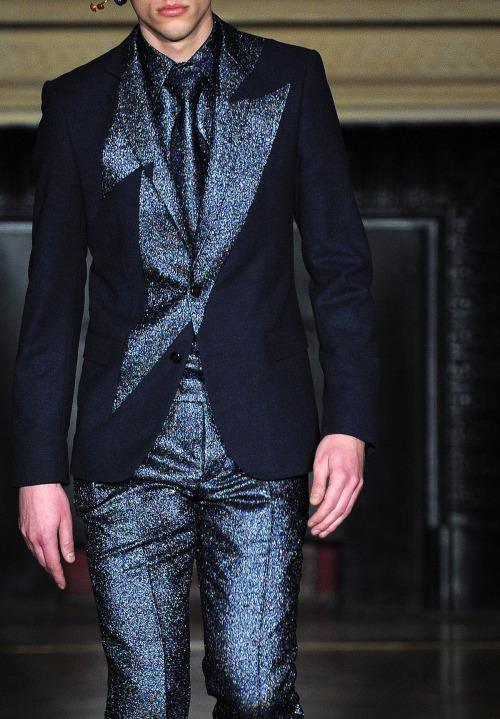 Walter Van Bierendonck is one of my favorite, more experimental designers.  What I love here is how the traditional suit has been turned into a flat surface that has been splashed with a zigzagging shape.  The result is rather surreal, which I always like.  What makes it work so well is the precision with which it is made.  Any deviation from matching those overlapping elements would make this a fail.  I give this one a rousing yes! 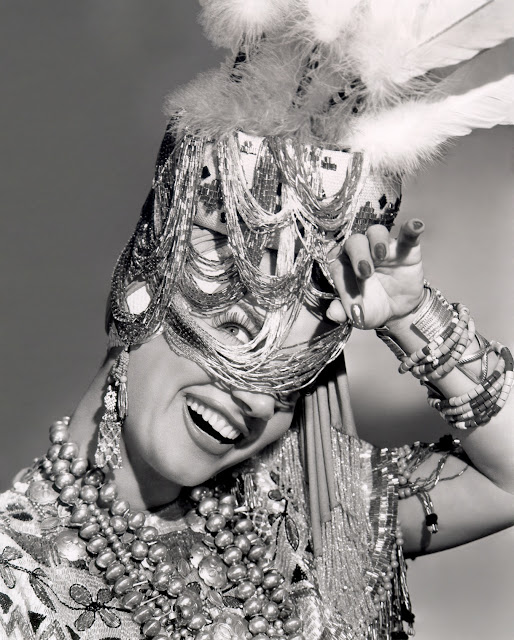 Force of personality.  Carmen Miranda is practically the poster child for it.  Never in Hollywood's glory days was there a performer who was more overburdened with decoration. Never was there anyone so massively laden with jewelry, fruit, feathers, pom poms and fringe as she.  Yet by sheer force of will she managed to overtop even all that ruffled, beaded, fooferaw and bring her unique persona to the public.  Perhaps it's because she so clearly saw the absurdity of it all, and allowed herself to never take any of it seriously.  As much as I write about the meaning and message carried within each garment we wear, we should never lose sight of having a bit of fun with it, and never let ourselves become too grimly serious about it all.  We are a wonderful and absurd species. we should go with that.


Okay Kids, that is this week's sampler. Now go out and sample some of our marvelous and crazy world.
Posted by Paul G. Ellis at 5:59 AM