The influence of Parisian couturier Paul Poiret was far reaching. His inspiration drawn from the east, and from the extravagant fantasies of the Ballet Russes perfectly suited the social changes that were occurring at the time.  As women were beginning to enter the work world in greater numbers, and even entering what had been traditionally male professions like medicine and law, the more loosely cut designs for which he was known that allowed greater ease of motion became very popular, and were copied at every level of retail, as well as by dressmakers all over.  There was also a languid sensuality to the work he did, which was very much at odds with the prior decades rigid codes of conduct that manifested in rigid and restrictive apparel. 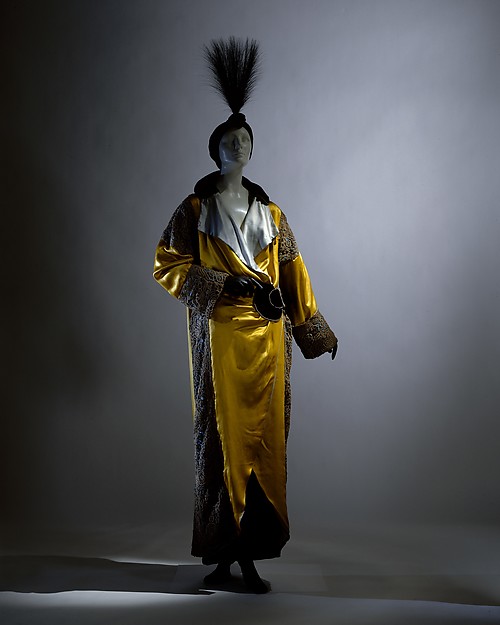 This wildly colorful and somewhat barbaric design is an opera coat from 1912.  The cocoon shape which he popularized allowed a slouchy, casual quality to emerge in the way that women wore them.  They seemed merely tossed on, regardless of how elaborate or precious they may have been. 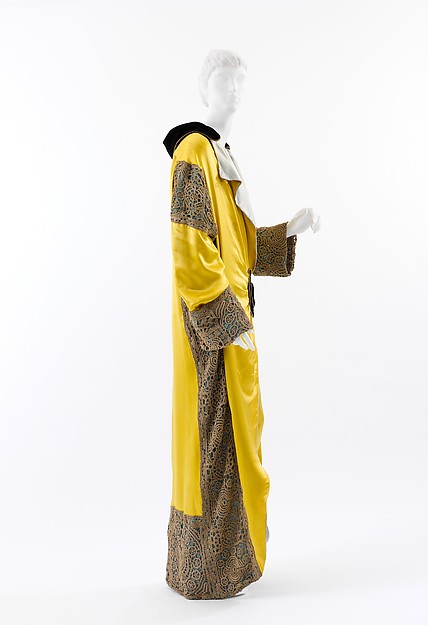 It is dominantly made of a brilliant canary yellow silk satin, with a bright turquoise silk satin lining and underlay to the trimmings which has sadly faded due to dye instability.  The collar is black silk velvet.  The major decorative elements are the large panels of gold and silver metallic file' crochet that trim the cuffs, shoulder and sides of the coat.  The broad lapels are also faded from what was a pale blue silk satin, to that nearly white color. 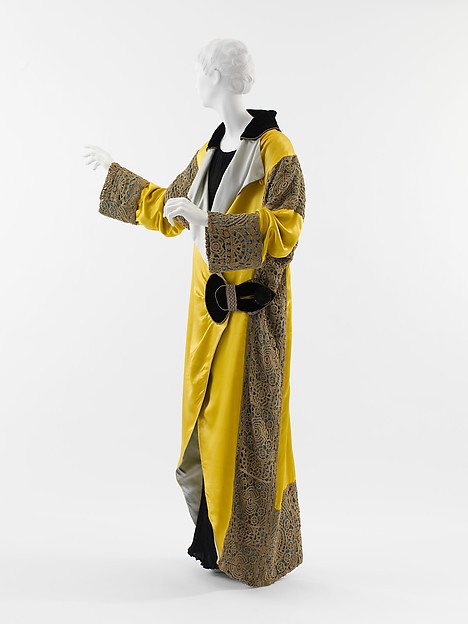 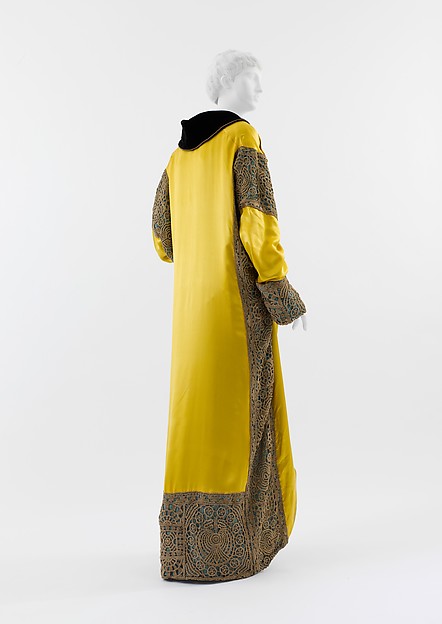 The cut, along with its slight cocoon shape is meant to be deliberately oversized, much like designs being done now.  It helps to convey that sense of eroticism that was a part of the Ballet Russes as well as what was perceived as the more open sexuality of the east.  As such clothing of this sort was a trumpet blast of change.  The coquettish approach was fading away, to be replaced by a more grown up, fully aware sensuality, that would express itself even more frankly in the 20s, and reach it's apex with the bias cut clothes of the 30s.  It should be no surprise that our modern notion of the femme fatale began forming at this time. 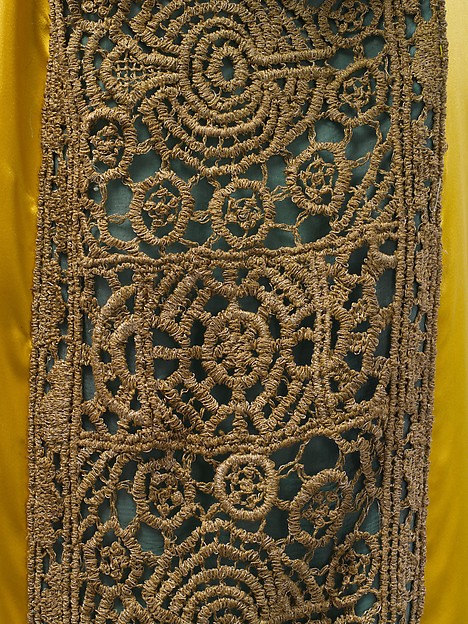 This opera coat is a wonderful mix of the refined and the barbaric.  The cut of the coat is sexy, and intellectual, but the choice of trimming, in both style and execution has a rude vigor that would have been unknown in decoration of clothing only a decade earlier.  It's a nod to the primal parts of us.  It also helps express that sensuality that underlies this and so many other pieces from this period. 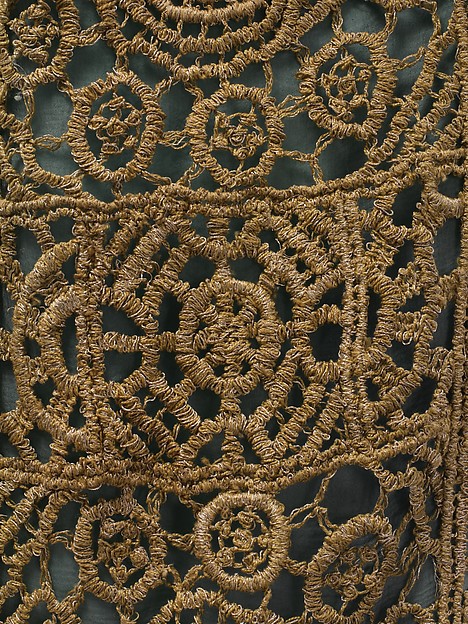 It does make me sad that we no longer feel the need for such a lavish accessory as an opera coat.  It feels like we've lost a few words from our vocabulary that could still be spoken with verve and elan. 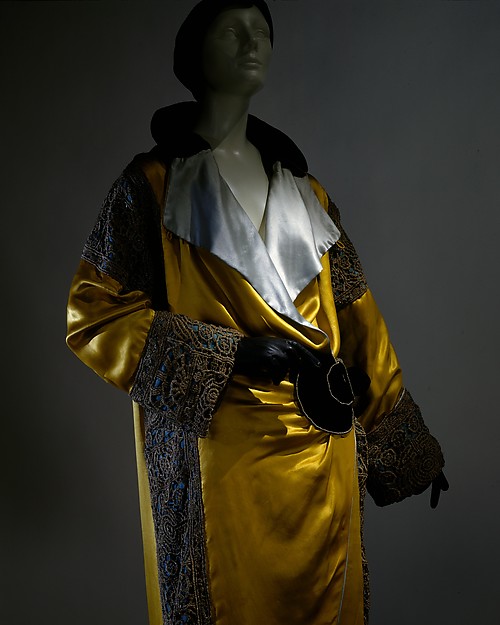 As a small aside, here is the design as it was rendered by artist Georges Lepape for the Gazette du bon ton, in 1912.  There has been a fierce amount of editing of the design details, but the sense of it is communicated very well, and we get to see the color combination as it was meant. 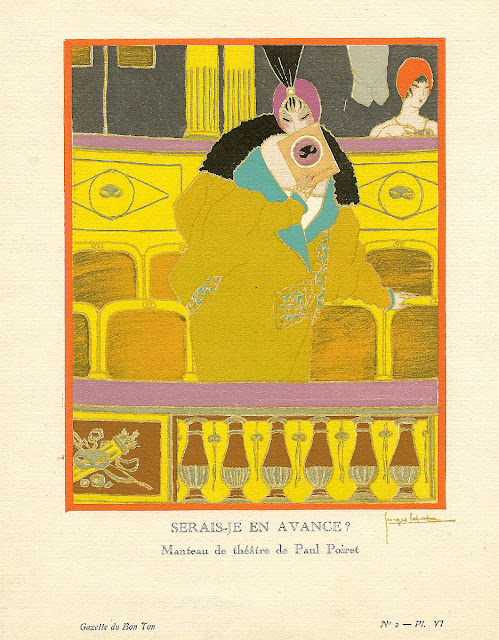 Thanks to the Metropolitan Museum of New York.
Posted by Paul G. Ellis at 6:55 AM