In 1673 the Duke of York married for the second time. This suit, which is part of the vast collection at the V&A is what he wore. 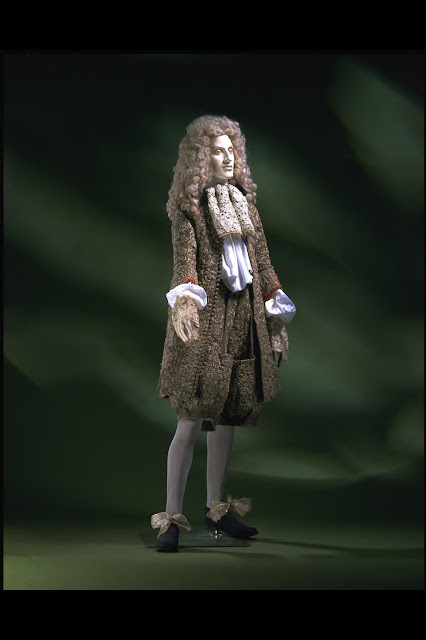 His second wife was Mary of Modena (1658-1718), whom he had married by proxy in Italy in September. The marriage contract was confirmed in November upon Mary's arrival at Dover. The second ceremony was a subdued affair, as Mary was a Roman Catholic and the union was unpopular in England and at court. Only the Duke's closest supporters attended and there were none of the public ceremonies or processions normally associated with royal weddings. The Duke of York wore this suit at the Dover nuptials. 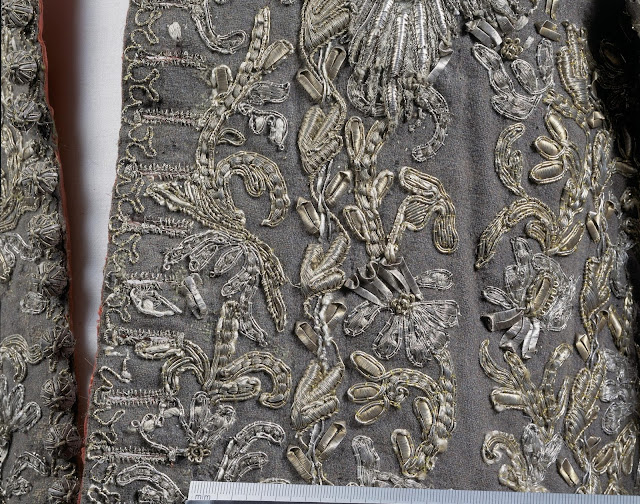 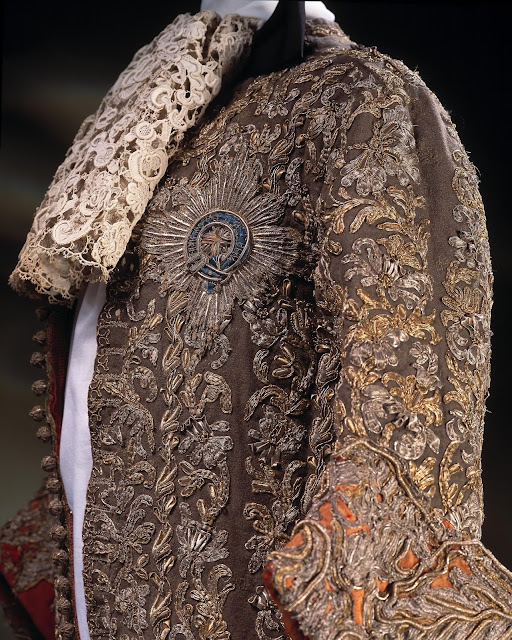 The suit is wool, but is covered over nearly all of it's surface with couched silver gilt, and silver threads.  Those threads are then wound around narrow strips of parchment, that is what gives the embroidery its 3D effect.  Part of what makes this amazingly extravagant suit even more interesting is that the embroidered design is not repeating, even though it is symmetrical.  It implies that the floral and foliate design was free hand drawn. 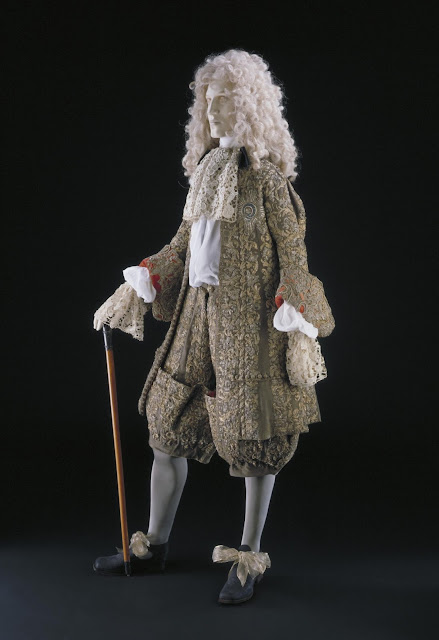 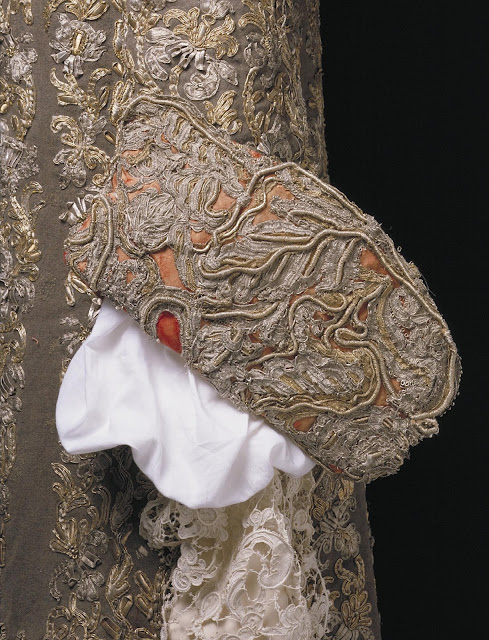 The style of the suit is one of the earlier iterations of what would emerge as the three piece suit by the 19th century.  And it's consistent with the clothing promoted through the courts of Louis XIV and Charles II, though it is of English make.  The waistline is above the natural point, and the sleeves of the coat are deliberately short, to allow the fall of the shirt and it's cuffs to be shown off to full advantage.
The cuffs of the coat are red wool, as is the coat lining.  It must have been far more dramatic when first made, but the red has faded considerably over time. 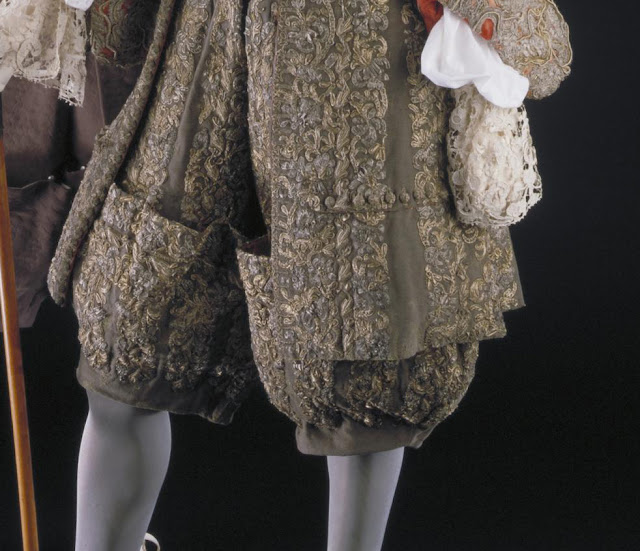 The breeches are very full and have a deep, broad cuff that is even wider than the breeches leg and is attached to the body at regular points to create something like pockets, though that was not the intent.  It was simply a way to be even more wildly, and evidently costly in dress. 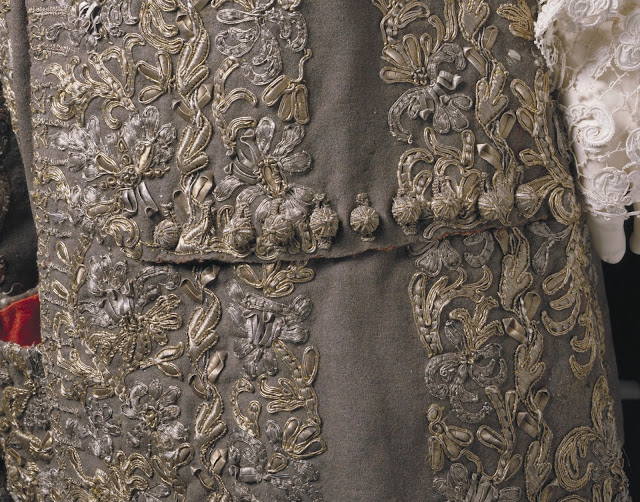 The suit has nearly 90 hand made, silk and silver gilt wrapped buttons.  More than fifty are on the center front, and ten each for the two pockets, with another 16 on one of the back vents.  The huge majority of these buttons serve no function beyond the decorative. 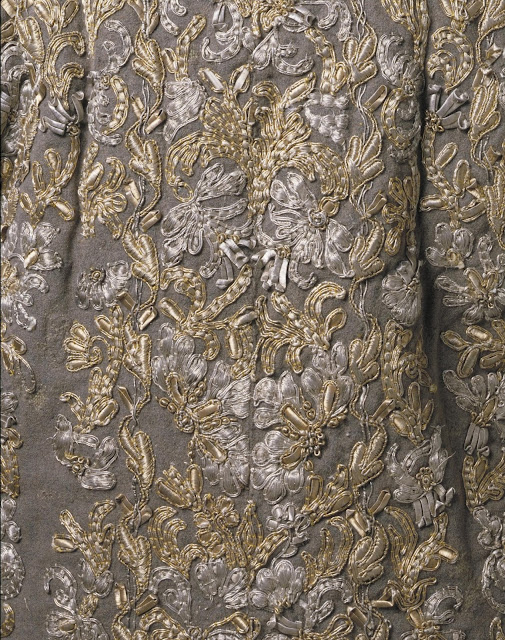 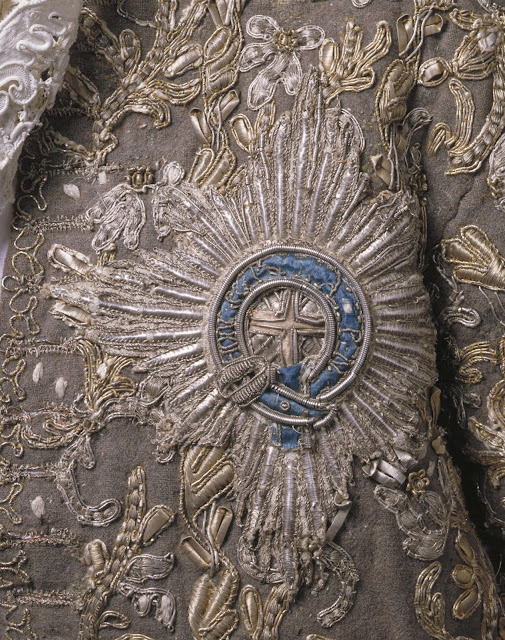 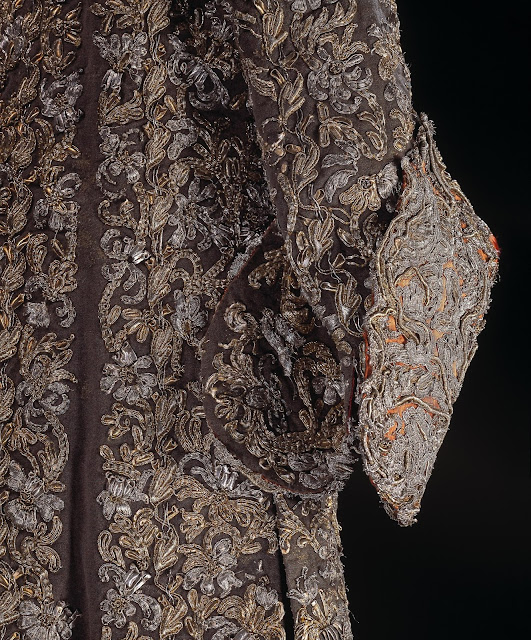 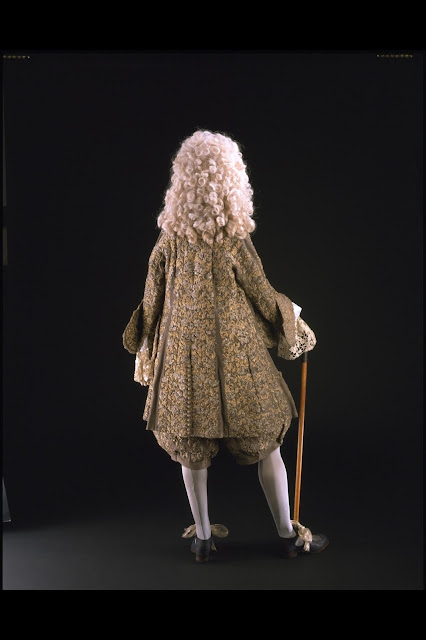 We are very lucky that this survives.  There is so much silver employed here it would have been a prime candidate to be taken apart and the silver melted down. And this thin must weigh a ton. Fortunately the ceremony was in November, so it probably wasn't overly hot to wear.
Posted by Paul G. Ellis at 7:26 AM