Good Morning All!
I hope this finds you well.  We are about to traipse down the twisting pathways of my crowded brain pan again, so get yourselves ready.
Are you ready?  You are?  Good. Here goes! 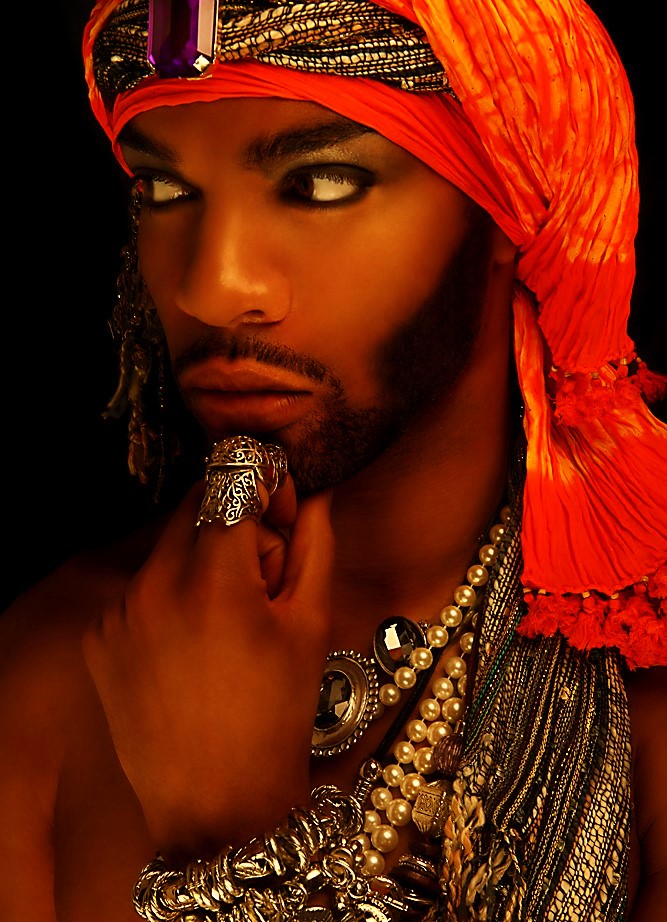 When I found this image on tumblr, it had no attribution, just it's tumblr designation.  So I've called this on Pondering Luxury.  Part of what we have described as luxury since the dawn of our presence here on Earth is the massing of physical things onto a person.  Where and how this became a cultural normative is lost in the dim recesses of our ancestral past.  But it crosses every cultural boundary, this idea of luxury being equated with more of everything.  I suppose that it was most likely something that developed out of the successful hunters and their wearing of parts of their dangerous prey.  But however and wherever it began, this is a concept that even now we identify instantly when we see it.  Sure, we can now also equate great wealth with a kind of visual austerity, but more is more is still a social and psychological mechanism of great power. 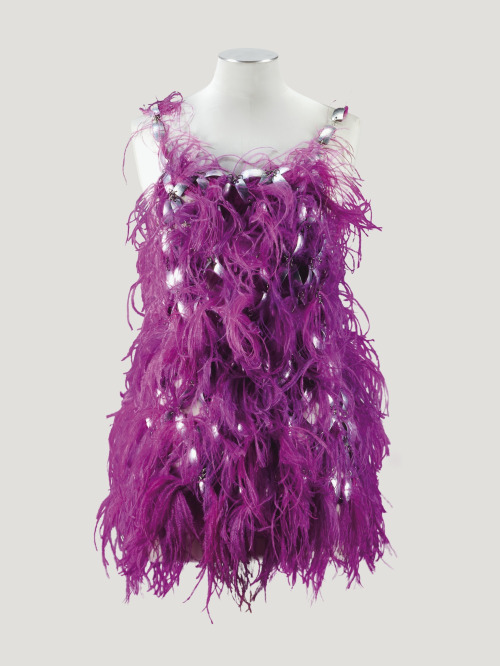 This dress by Paco Rabanne is from 1968. It's a great exemplar of the kinds of experiments that were going on with texture and materials use at the time.  Looking at this now, it's hard to imagine how avant garde this was at the time of its design, but it surely was.  Though it's true that clothing covered in feathers was hardly new, its the mixture of plumage with the curving aluminum links that forms thee body of the dress that makes it so.  I can't imagine it was terribly comfortable to wear, but how often are we willing to suffer for beauty's sake?
I also love the juxtaposition of the light mobility and brilliant hue of the feathers with the stark rigidity of the metal. 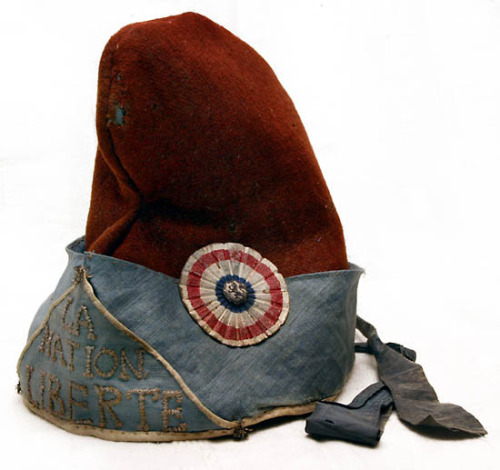 This next item is called a Phrygian cap and it was one of the great physical symbols of belonging to those who were revolutionaries in France in the late 1700s. The style of cap comes from several eastern European areas, most notably Phrygia, and during the latter days of the Roman Empire it was worn by slaves who had won their freedom.  This one is a pretty lavish version, with its ribbon cockade and the embroidered legend, "La Nation Liberte" on the front. The 'red cap of liberty" was always dominantly red, but sometimes, as here had additions to its basic shape, so style and fashion had their way, even amidst the furor of revolution. 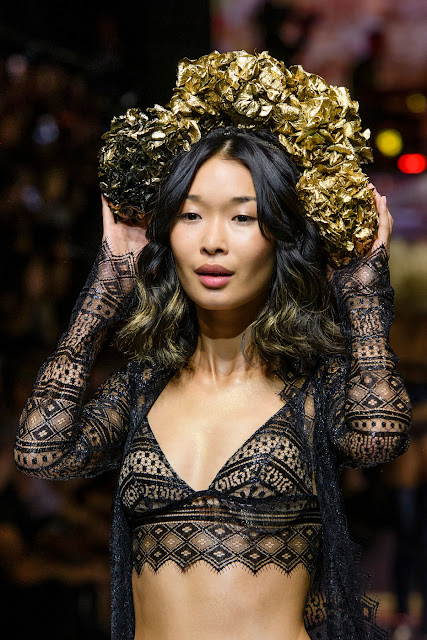 What I found fascinating here is that by the cut and decoration of these garments it looks far less as though the model is wearing clothing she can put on and take off, but that her body has been complexly painted or tattooed.  As well, it seems to lose a good deal of the sexual charge it might have through it's looking applied, not worn.  As though she were simply as the people of her culture appeared, not deliberately trying to provoke attention.  As a side note, the quality of the decorative work is amazing. The very fine lace material has been extensively, and expertly beaded.  It's an amazing ensemble, though it's an item of pure fantasy. 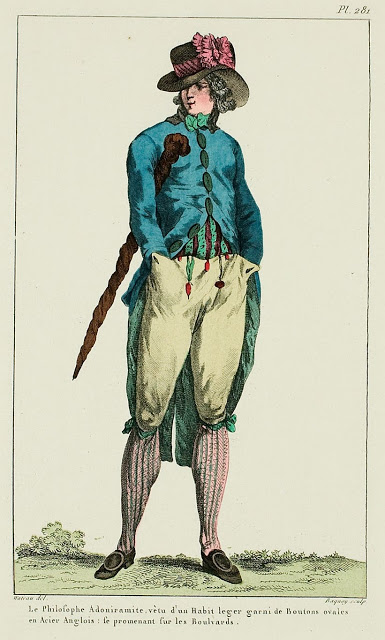 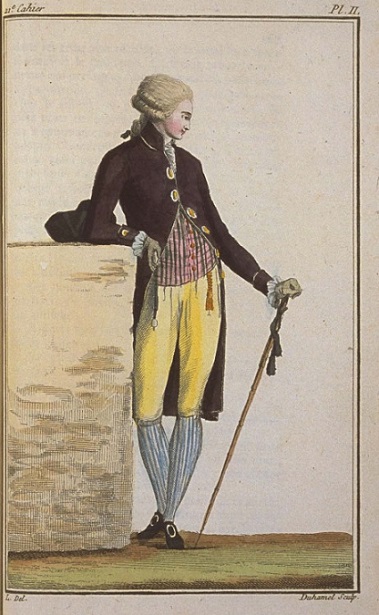 I have not enough vocabulary to express how much it delights me that color is starting to return to men's clothing after so very long an absence.  These two images from the 1780s of men's fashion plates give us a look at the kinds of colors and combinations that were stylish at the time.  And part of what is interesting to me is that clothing of this sort would not have marked a man as effete in the least. But in just a few decades this sort of dandified apparel choice would be associated with dissipation, questionable sexuality, and a probable lack of common sense.  It's also interesting to look at the idealization of the male and how that too has shifted.  Minute feet, hands, and heads, with over-large calves and fairly narrow shoulders, drawing the attention to the hipline. 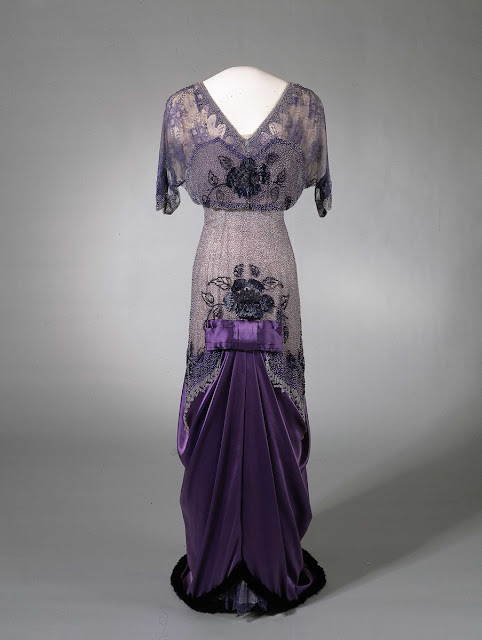 There are two entirely divergent reasons why I chose this dress today.  The first is that the decoration, though polite and ladylike in the extreme is placed directly over the woman's genital area. The flower, in particular, with its concomitant associations of procreation is not entirely subtle.  What is really interesting is my second point. The entire costume is ravishing in color, proportion and finish. it's a gorgeous piece of clothing.  So much so that the fact of the decorative placement seems to fade out of relevance.  And if we had any doubt about where our eye should be going, the gathered draperies in the front and the terminating box bow settle those doubts. 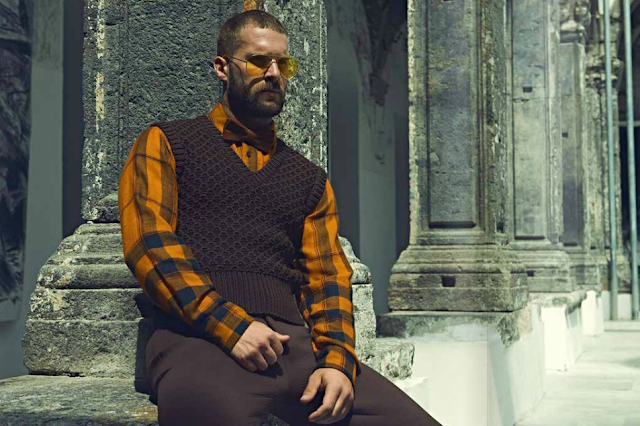 This image made me smile.  As a child of the 60s and 70s, looking at this called up every geeky kid who ever got harassed by his peers in junior high.  What makes me smile here is that nearly every part of what marked a kid out as being a dork is present here, but changed up into hipster modernity.  The double knit looking trousers, the sweater vest, the plaid shirt and bow tie, all combine to recreate that somewhat painfully dweeby look as something cool and current. Is this the real revenge of the nerds?  I think perhaps it is. 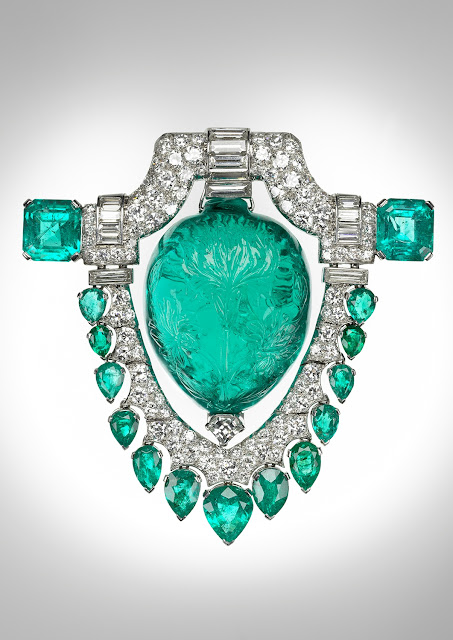 When her father C. W. Post, owner of Postum Cereal Company died, Marjorie Merriweather Post found herself at 27 the wealthiest woman in America with an estate valued at 250 million in 1914.  She went on to develop the company into what is now General Foods, and during her life devoted a considerable amount of time and energy to doing charitable work.  This did not in any way keep her from enjoying her wealth to its full extent.  This diamond an emerald brooch is all the proof you need.  The central stone is a 60 karat ovoid cabochon moghul emerald that has been carved with flowers.  She commissioned the piece from Cartier (for whom she was a consistent client) and it now resides at the Hillwood Estate Museum, which houses most of her huge collection of jewelry.  Yes, please. 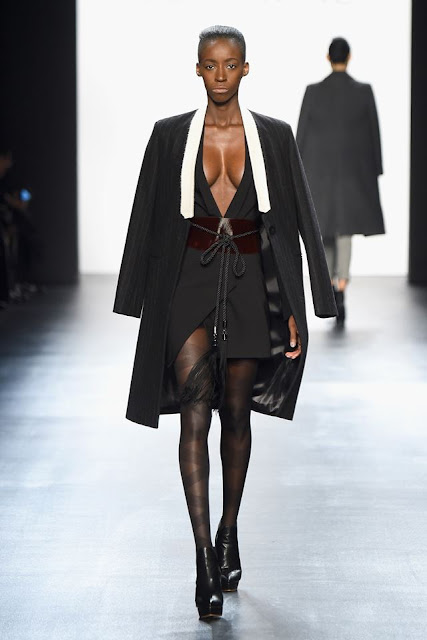 Most of this design I have no issue with, in fact my only issue is with the choice of model, whose very ample frontage is taking the focus away from the garments and placing it on her sternum. It's hard to see anything else, and I'm not even hetero-inclined.  It was probably a deliberate choice on the part of the designer to pair this model with this ensemble, but I think it's a failed decision.  If the point here is to show the clothes, then this misfires.  That is sad, actually because there are things about this set of garments that are worthy of notice. The coat is beautiful, and the dress has its merits too. 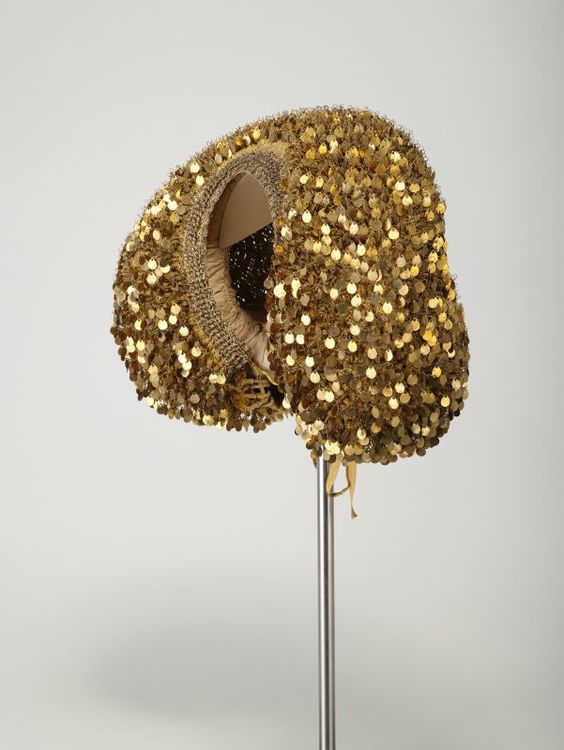 Something that seems to be common to  the world's differing cultures is the desire to put women into a headdress of some sort.  Where in many cultures men go without headgear, or their choices are wider, all over the world part of what defines societies visually has been the presence of a specific sort of head adornment for women.  I think of the headdresses of the various European nations, and how the astute could tell the region and possibly even the specific village where the woman came from by her headdress.  Societies through Asia have done the same thing, as do many South American, African and North American cultures.  This dazzling example is from Nuremburg, Bavaria and was made between 1650 and 1700.  Of course, globalization and world spanning shopping opportunities have diminished the power of these regional headdress styles to the point where they occupy a place for festivals only. 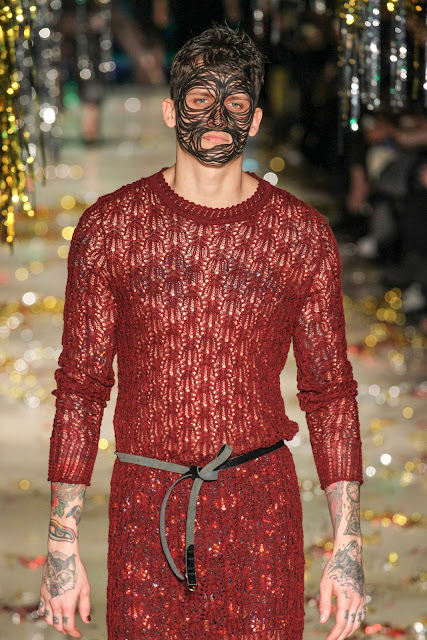 Here's an example of what to be cautious of in our real world choices.  No I'm not talking to the boys about avoiding wearing a see through knitted red dress if they want to.  Not at all. If women can play in that particular sandbox, no reason why us fellas shouldn't be allowed to.  What I'm getting at here is that if you are going to choose a serious focus pulling garment to wear then it's vital that whatever other things you choose, don't compete for attention.  The narrow belt is fine, harmonizing with the scale of the dress. It's that facial scribble that grabs the eye and diminishes the effect of everything else.  So choose your accessories with care to make sure they harmonize with the other items worn.  You don't want your statement made to be unintelligible. 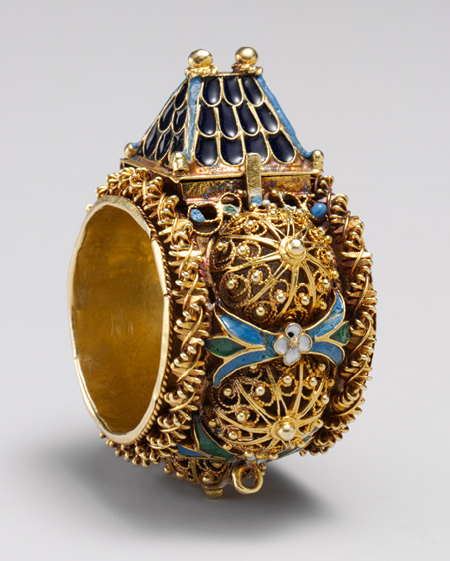 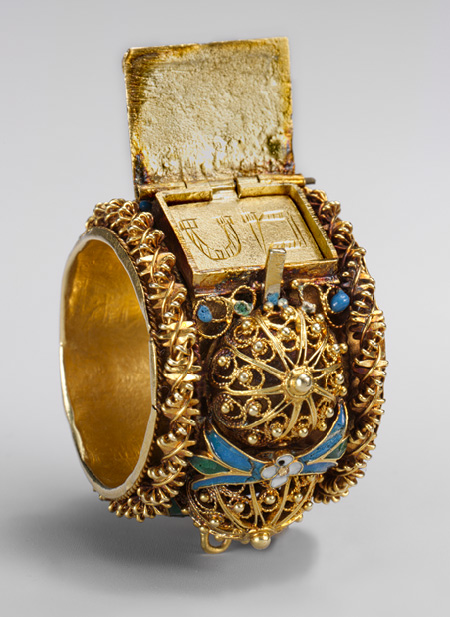 As a word in the Attire language the ring is one of the more potent and far reaching in its uses and meanings.  Most cultures use rings to establish relationship of one sort or another, mark significant events, or proclaim love.  This gorgeous piece of jewelry is a Jewish betrothal ring, possibly from Venice between 1600 and 1800.  The body is gold filigree with black, white, blue and green enamel.  The casket on the top of the ring opens to reveal the Hebrew inscription, mazel tov.  It does sadden me that such charming symbolic expressions of sentiment have mostly faded out of usage.  Where jewelry used to be replete with hidden meanings, script, and story, much less is conveyed now.

I hope you enjoyed this wander down my garden path.  Have a great weekend, all!