Time for the weekly romp through my noggin.  Enjoy your wanderings. 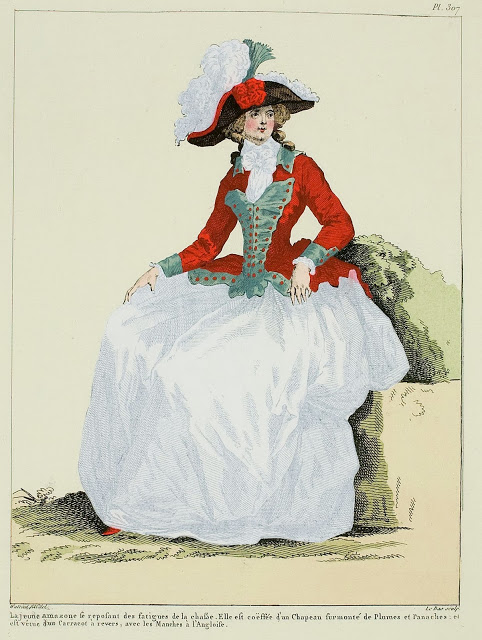 First on the trail today is this fashion plate from the 1780s.  Riding was for a very long time something ladies did only to get from one place to another. It was allowed of necessity.  But over time, and especially after the development of the side saddle which became the only ladylike way to ride riding began to be considered one of the few forms of exertion that was not at odds with the behaviors demanded of a lady. So, during the 1700s, and largely due to Marie Antoinette who made riding gear fashionable, specialized clothing came into being that was intended for horseback.  It was most often masculine in design, usually aping military regalia.  To our eyes this is ridiculous apparel for riding a horse, but it was an absolute revelation to women of the time.  The skirts were un-ornamented, and the styling of the coats allowed for a certain amount of playing like the boys do. 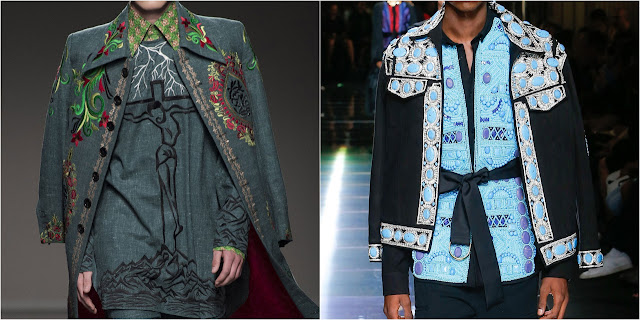 I've written much about the slow changes happening within the menswear sector of Attire. These two designs are a case for it.  The left hand image is a design by Helen Anthony, and the right is by Balmain.  Both express the growing desire for surface decoration and detail, a level of elaboration unseen since the 18th century.  Anthony design gives us a strong dose of the kind of fierce juxtaposition, verging on the ironic, that has become so much a part of current culture.  The Balmain design is busy about creating a new formality through its rigidly controlled embellishments that take a commonplace design like a denim jacket and re-imagine it.  Sure, both of these versions of new male apparel are out of reach for the vast majority of us, for now.  But should the idea take firm hold it will begin to spread out across manufacture at all levels. 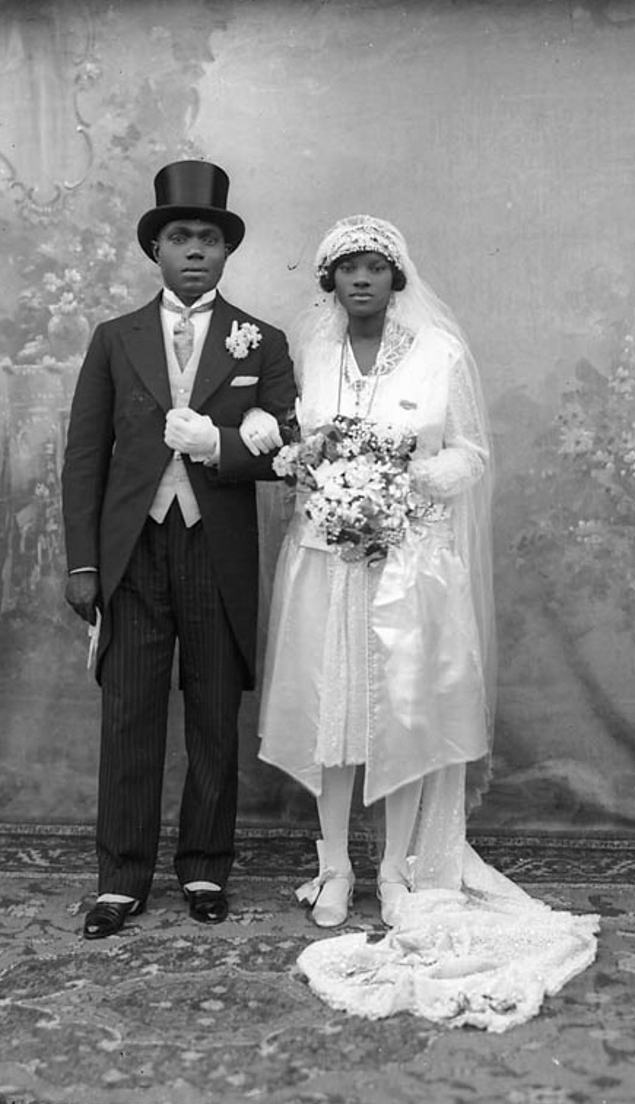 When I came across this image of a newly married couple from 1927 I just got the biggest smile.  What a marvelously stylish couple they are.  The groom's cutaway coat and striped trousers are of the very latest cut, down to the perfect break of the pants over his shoes.  His tie is the newest fashion for neckwear as men's ties begin a slow expansion that will continue for a decade.  The bride could've stepped out of a fashion shoot.  Her charming robe de style dress has the side volume it requires, but it is narrower than a few years earlier it would have been, in premonition of the leaner lines just about to emerge by 1929.
This image makes me wonder how their lives progressed, and where they ended up. 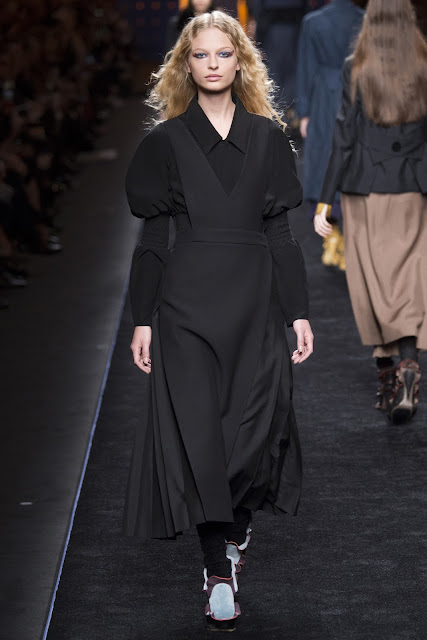 Looking at this the association I cannot escape is the novel and film, "The Handmaid's Tale".  There is something dystopian and out of step with reality about this.  I know I'm struggling to see this without the kneejerk responses we are so prone to.  I can tell I'm partly responding to the unrelieved black. Part of it too is the bib front of the dress, the mid calf length and the fullness of the sleeves. All these things combine in my head to create an ultra-conservative, and somewhat misogynistic presentation of woman.  I want to get around that and be able to see it dispassionately. The only way I can see this other than as I've described is to separate the pieces, and try to see them in other colors.  Amazing how deeply we are programmed to respond to things, and how profoundly it affects us. 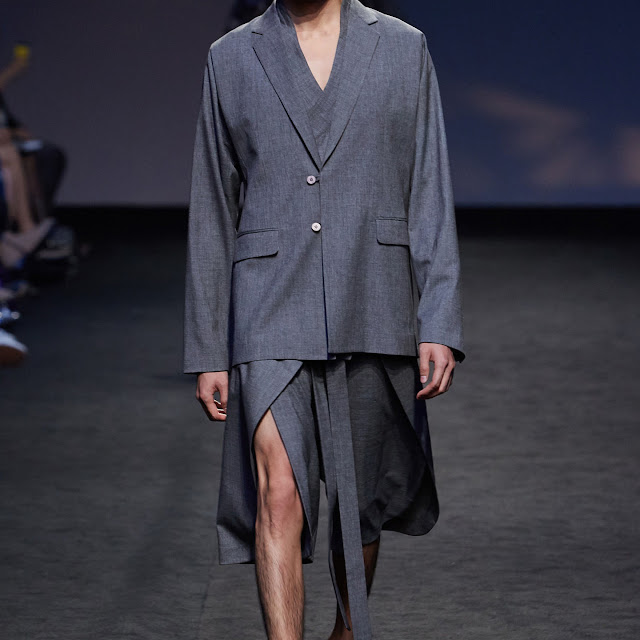 Another menswear experiment.  Honestly, just loose the over-long ties on the front and I'd be on board.  The most intriguing part is the wrapped legs that operate as shorts.  The open wrap allows maximum freedom of motion, and I would imagine creates a pleasing movement of the fabric around the body as the wearer walks.  I also like the quietly simplified suit jacket.  It has the general shape of a coat we know, without the rigidity that goes with it.  it recalls the slouchy, unlined jackets that were popular in the 80s, without the sloppy aspect they so often had. I'm tempted to make a pair of shorts or pants that do what these do, just to see how they feel and move. 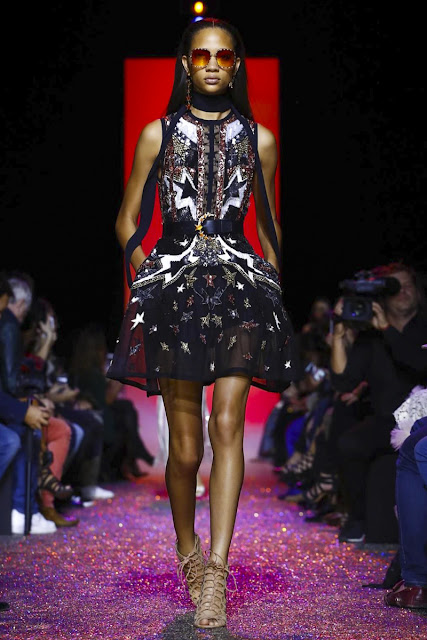 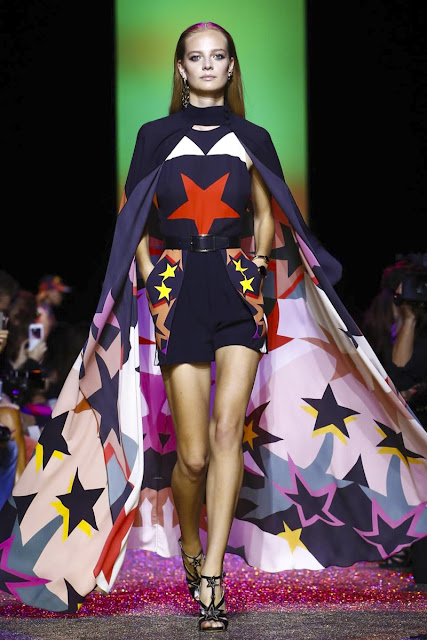 It is a near requirement in modern runway presentations that there be one or more designs that exist only to forward the inspiration and concept that is meant for the collection as a whole.  The first image here is an Elle Saab design from the S/ S2017 collection that is the design concept as it is meant to be actually worn.  the second image is the concept piece.  It is too grand and cartooned to be wearable in a real world setting outside of a pop music stage performance.  It does however give you a trumpet blast of what the collection is about, superheros and stars. 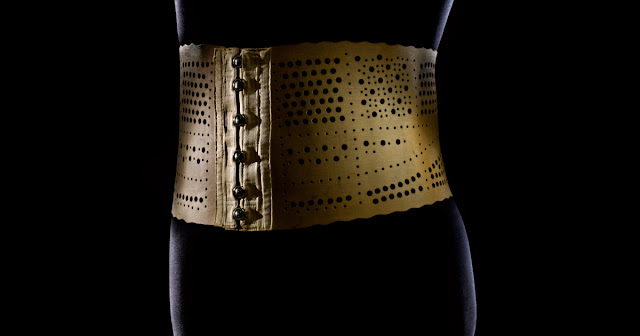 I recently did a post here about how men have also been subject to body modification through apparel.  I didn't have room for this example at the time.  This is a man's corset, made of pierced leather and canvas, with a steel center front busk on either side of the opening.  It's from the 18th century. So just imagine a fellow in a lavishly embroidered silk suit, with his powdered hair and high heeled shoes swanning about in the evening.  To be realistic, this corset is pretty tame. It doesn't do much alteration.  If you can get this thing closed in front, you're good.  There is no additional restriction possible, unlike a woman's corset.  There certainly were men's corsets that allowed tight lacing. This is simply not one of those. 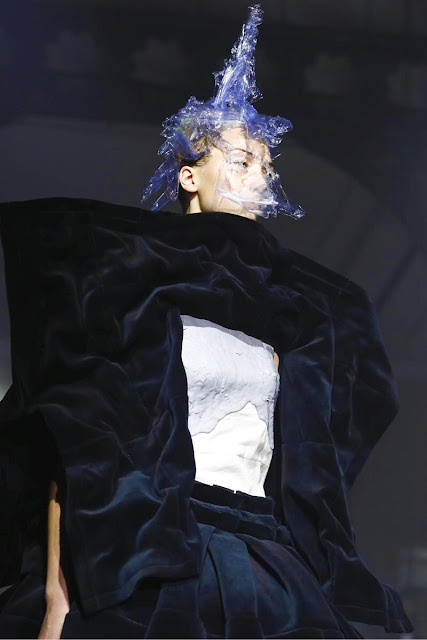 When it comes to envelope pushing Comme des Garcons is right out there on the precipice shoving that envelope over the edge.  As a design, this isn't even so much an intellectual exercise, as it is an emotional one.  I can't even tell you what sort of emotion it is that is the intended response.  Perhaps all that is required here is that we have one, whether it's curiosity or revulsion, approval or dismissal.  My take aways here are related to the combination of textures.  The bustier seems almost roughly hewn from a block of chalk.  The framing garment, which might be a coat, but who can say, is interesting in that it scales up the rough texture of the bustier, while transforming it into something more appealing to the touch.  The velveteen has a subtle and intriguing look to it. We want to know what it feels like. 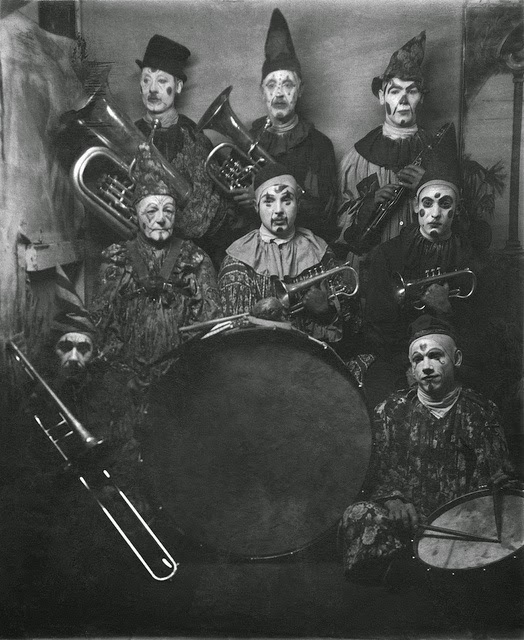 There are, or rather were many Luna Parks across the USA over the prior century. This image of the La Sousa Clown Band comes from the Seattle Washington version, from 1909.  I can't imagine that this group really caught fire with people, considering the deep seated discomfort so many have with clowns.  Perhaps it's the facial exaggeration through the make up that is the most disturbing.  Plus our observation of clowns is that their entire behavior is emotionally driven, so they can manifest any kind of extreme emotion equally.  It's a concept many would find unsettling to say the least.  On top of that so many clowns choose an outwardly depressive mien, like these fellows.  Hardly an inducement to musical enjoyment. 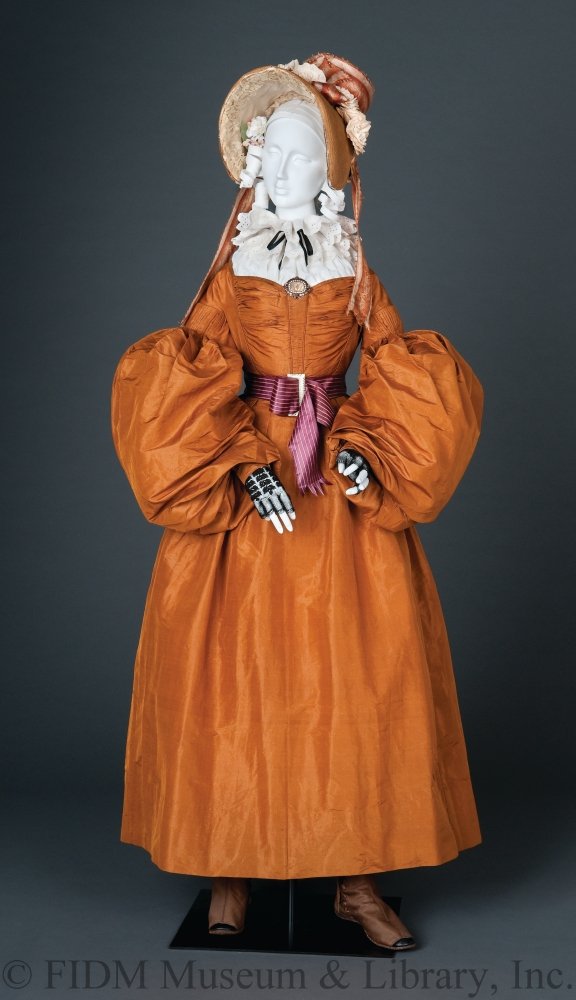 This day dress from 1836 or so chronicles one of the more peculiar fashions we ever devised.  In our constant exploration of physical proportion, and the shifting emphasis on areas of the body, giving women Popeye the Sailor Man forearms is one of the weirder ideas we've assayed.  When you combine that with the fashion for a narrow look to the shoulder line, and a waist that was above its natural position, the body is altered in some unique ways.  It combines to make the arms appear overly long, which is helped of course by the huge mass on the lower sleeves.  As a side note, sleeves like this were held out with stiffened netting, or pads of goose down or horsehair that could be removed through slits in the inner facing part of the sleeve for cleaning and storage. 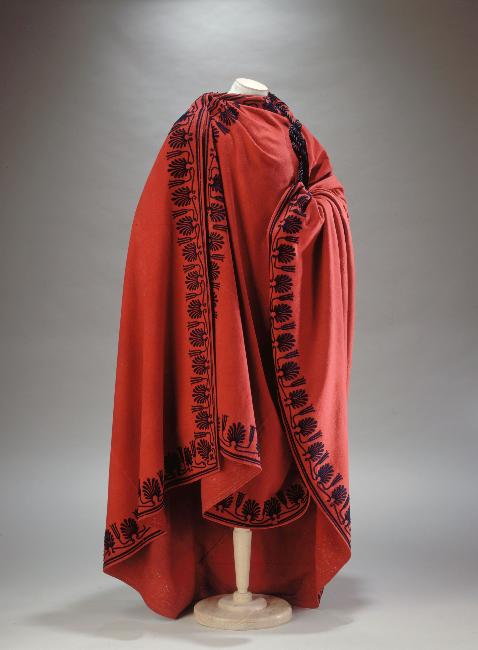 During the French Revolution while the people were taking back power to themselves governmental officials were wearing this. Its semicircular cut is reminiscent of that of the Roman toga, but the cloak was draped over the left, rather than the right arm and pinned in place on the right shoulder, rather like the chlamys worn by the Greeks. It was embellished with blue wool appliqués of palmettes and tridents. Like other cloaks, this one was commissioned by the state in 1798. The fabrics were provided by factories in Sedan and the garments were cut in Paris and embroidered in Lyon. The cloak was worn over a knee-length coat and close-fitting breeches, the outfit being rounded off with a blue velvet toque bearing a tricolour plume. This first uniform for representatives of the people in government institutions was decided on by the Convention in 1795: after much debate it was decided to combine modern dress with an antique-style cloak, the result being close to the design proposed by painter Jacques-Louis David (1748-1825) in 1794. The costume was worn officially for the first time on 19 February 1798, by members of the Directory Councils. 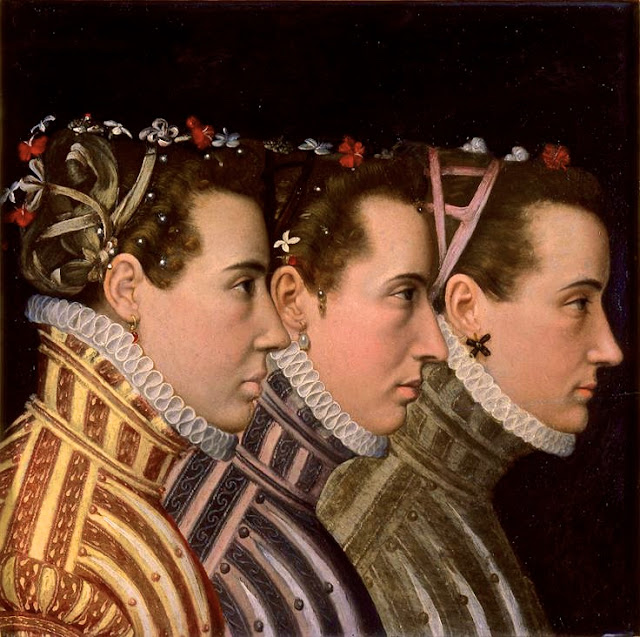 French king Henri III who ruled from only 1574 till his murder in 1589 at the age of 38 was  not very quiet about his sexual life and drew around him a large coterie of handsome young men, three of which are shown here in a triple portrait attributed to Lucas de Heere.  What is reveals to us is how far afield he and his "Mignon's" got with their clothing.  His fellows all tried to copy the King's own style of dress, which was by all reports flamboyant, and considered rather effete. In particular the ribbons, flowers and pearls in their hair, which was decidedly not a fashion generally accepted in France or anywhere else.
It was restricted to the French court, and especially to those men who caught the eye of Henri.  And here, as an extra bit of fun, is he, himself, the King. 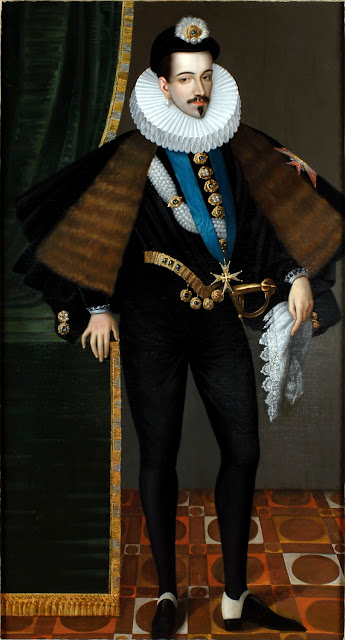 Well, that wraps it up for this week's scatter, my friends.  Have a grand weekend!
Posted by Paul G. Ellis at 5:37 AM