The pot has been stirred and there are a dozen different things that have risen to the top to be skimmed away and served up hot to all of you.   So let's see what is on the plate this week, shall we? 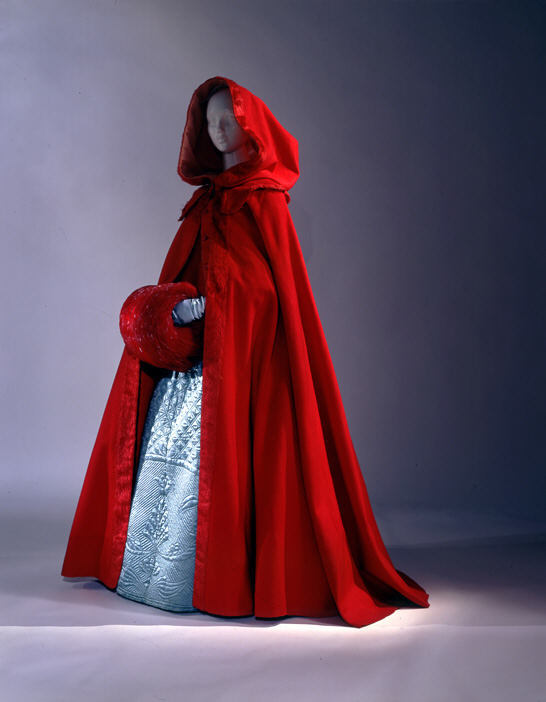 First course today is this gloriously red wool cape from the later 1700s.  It is part of The Metropolitan Museum of Art's collection.  It's a wonderful example of winter wear, and a reminder that at that time a cape was an essential item, for both women and men, and with little regard to class.  In today's crowded, and fast paced society they have little relevance, but in a more agrarian, and slower moving culture they were the best possible option.  In their ability to keep the body protected, they were without rival, and since most clothing was made at home, they had the advantage of being easy to construct, even for someone with minimal skills.   This one, of course is very finely woven wool, and lined with matching silk. It would not surprise me if this garment served multiple generations of women, before it was finally retired.  It wasn't till the middle of the 1800s that capes began to fade out as a widely used article. 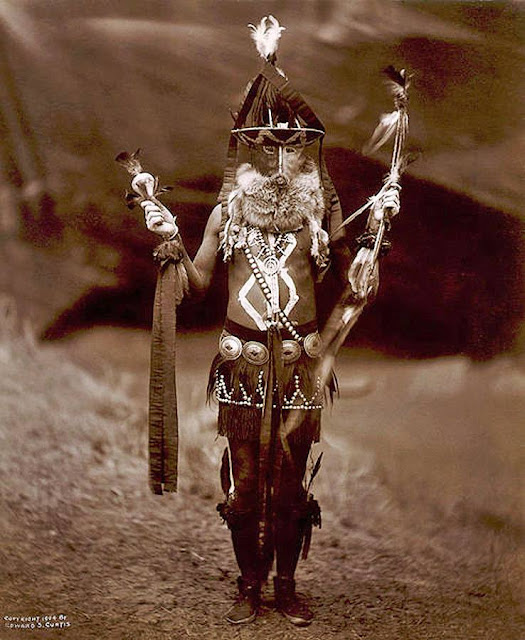 This photograph of a Navajo shaman dates from 1904.  What appeals to me here is the efforts we will undergo to divorce ourselves from the mundane world in order to access what we perceive as the divine or unseen realm.  Every article in view with the possible exception of his footwear is calculated to allow him to get to the spirit world and deal appropriately within that sphere. The result of all the accoutrements is that he ceases to be fully human.  The person within is subsumed temporarily, becoming the visible access point, the bridge between layers of reality. Every primary culture uses this concept.  The only thing that varies is the specifics of how it is achieved.  We might look at holy men and shamans from differing societies and think them vastly separated, but they are joined by this one essential.  The person becomes only a conduit by the acquiring of garments and tools meant to open a path to somewhere else. 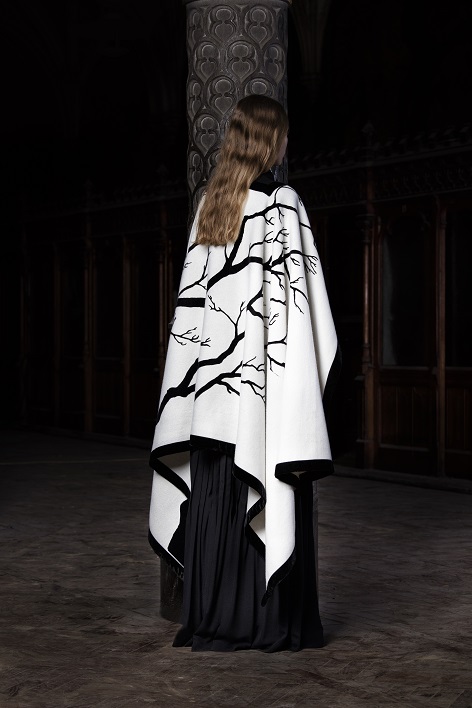 Here's another cape, this one a fully contemporary one.  In our current culture the cape survives almost exclusively as an article of formal wear, since only in formal settings does it's drama and physical mass not intrude in a negative way.  This example is by Veronique Branquinho from 2016.  The bold design is nearly operatic in it's expression, which also helps define it as an article of formality.  The scale of the single image of a cluster of branches has a strong Japanese feel to it, recalling the extraordinary imagery often used on kimono.  I'd wear this, if it were scaled correctly for me. 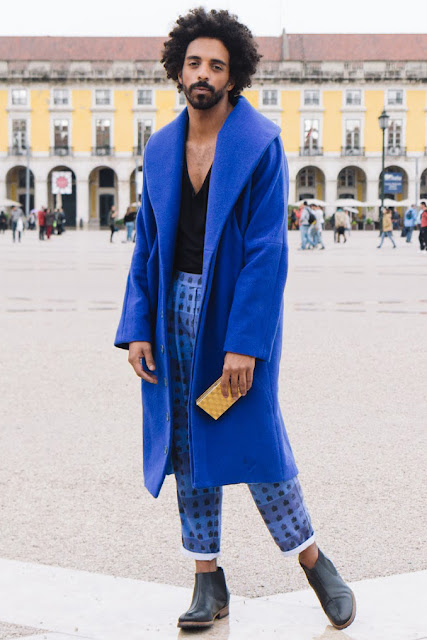 Just because our world has shifted towards a more easeful style of dress, doesn't mean it can't be classy, interesting, and pulled together.  This fellow, seen attending the recent Pitti Uomo in Milan is a case in point.  Each part of this ensemble is simple, but carefully considered.  And each piece could do plenty of service with other things at other times, so this has significant utility as well as style to it.  The other thing I find appealing here is that this manner of dress need not cost a fortune.  Everything here is achievable on a small budget.  Style doesn't equal expense.

This blue and black plaid afternoon dress is from 1881. What I often find fun is looking at something like this and trying to pick up on the reality of the person who made it.  First of all this is definitely not the work of a dressmaker.  The way this is cut and assembled shows too many errors to have been a professional's work.  For example the plaid repeat doesn't match up across the skirt, being significantly higher on one side from the other, which also brings the button placement into question.  Also the rows of fringe trim on the underskirt are a bit wonky, something a pro would never have allowed.  The lady who made this wanted very much to be super stylish, but didn't have the resources to fully get there.  The cut of the dress is very modern for its day, but the execution falls short, as is clear.  Also, the use of jet buttons seems halfhearted, or more likely, that's how many of them she could afford. So she used them where she could.  What would have improved this tremendously is massing all the buttons around the diagonal of the bodice opening. It would draw the eye effectively upwards. What other changes would you make using only what you see here? 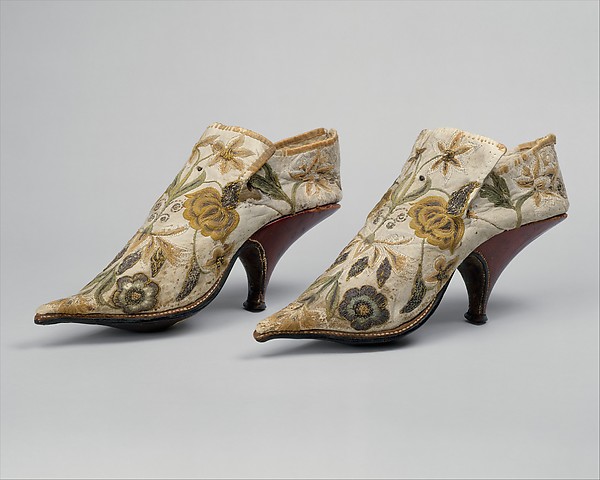 Heels you say?  How about these babies?  These red heeled silk and leather shoes are from the later 1600s.  They are men's shoes, not women's. The red heels were a signal of social position and privilege.  And clearly the way these shoes are designed they were not meant for significant walking, but for artful posing and sitting while enjoying the fruits of wealth and status. 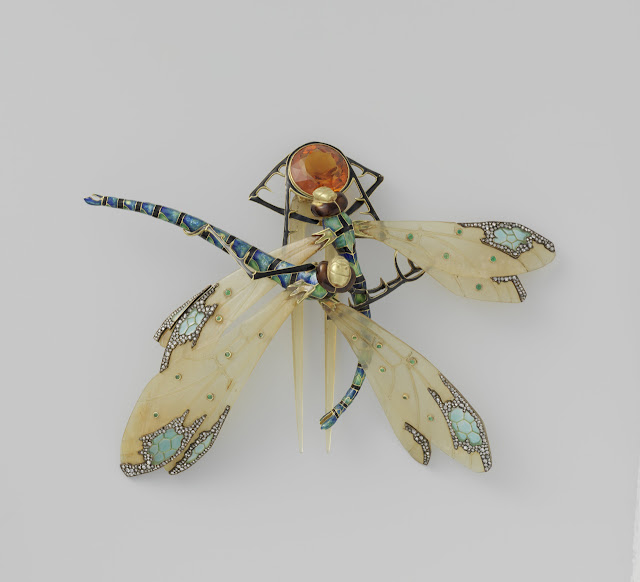 Jewelry designer Lucien Galliard created this magnificent example of Art Nouveau style in 1904.  It's a hair comb of a pair of somewhat stylized dragonflies (which were a favorite motif of the time), done in plique a jour enamel with diamonds and a large, round cut citrine.  Though Art Nouveau was not as pervasive an influence during it's time, since creating its esthetics on a large scale was so complex and costly, it became very influential in certain parts of design, including jewelry for over a decade.  This piece is wonderful in composition and execution.  I can easily imagine this perched on the back of a woman's hair, looking wonderful and fragile. 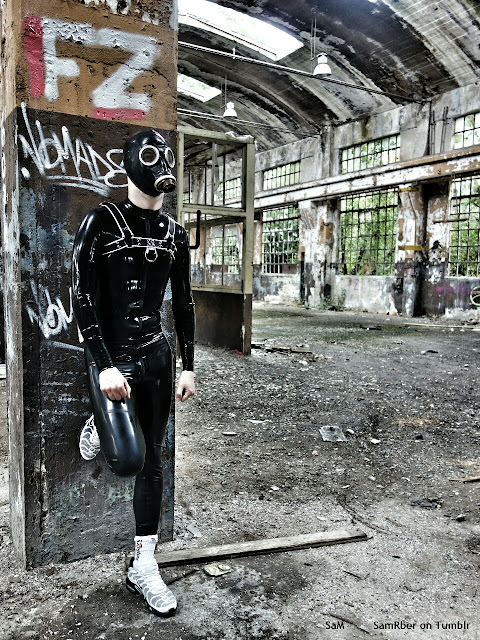 One of the more significant concepts within the subset of Attire that pertains to sexual fetish is that of constraint.  The notion of the restriction of motion, or as here, compression of the body being that constraint.  The person within is transformed, as I've spoken of before, into something not entirely human, and as such can be approached differently than if they were revealed in their normal way.  So, the rubber gear here, not only physically constrains, by placing a uniform layer of pressure on the body wherever it touches, but also both constrains expression and releases it.  The normative part of the person's expression of self diminishes, allowing the hidden part to be revealed through both the promise of sex, and it's actuality.  The use of the gas mask does more than hide the identity of the wearer, it implies a level of potential toxicity to whatever might occur, amping up the perceived danger, and further opening the door to relaying that which is usually hidden away. 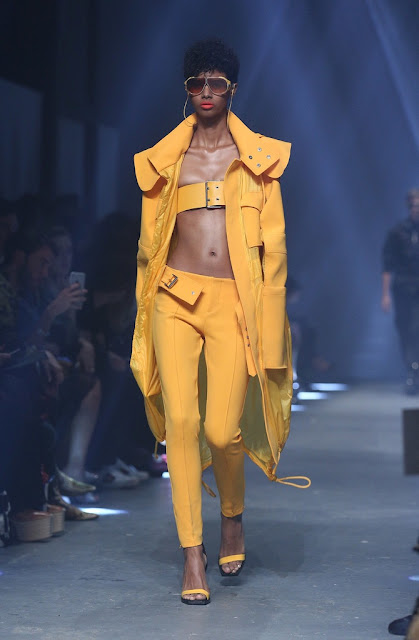 Moving on with a different conception of constraint, this Versus ensemble from the S/S 2017 collection.  This is an odd, but interesting juxtaposition of release and confinement.  The models breasts are bound down with what looks like a mighty uncomfortable belt/bandeau.  Her hands are rendered useless by being lost up the overlong sleeves of her jacket. Yet, the knit fabric of the pants suggests ease and activity, freedom to move, as does the amount of bare skin.  To a degree this ensemble is as much fetish gear as the full rubber outfit I just showed you. And it speaks about the shifts going on in our culture regarding how much more easy we are with discussing things of a sexual nature.  Yes, this still renders the model as a sexual plaything, but in a more forceful, less compliant way.  Is it a step forward?  You tell me. 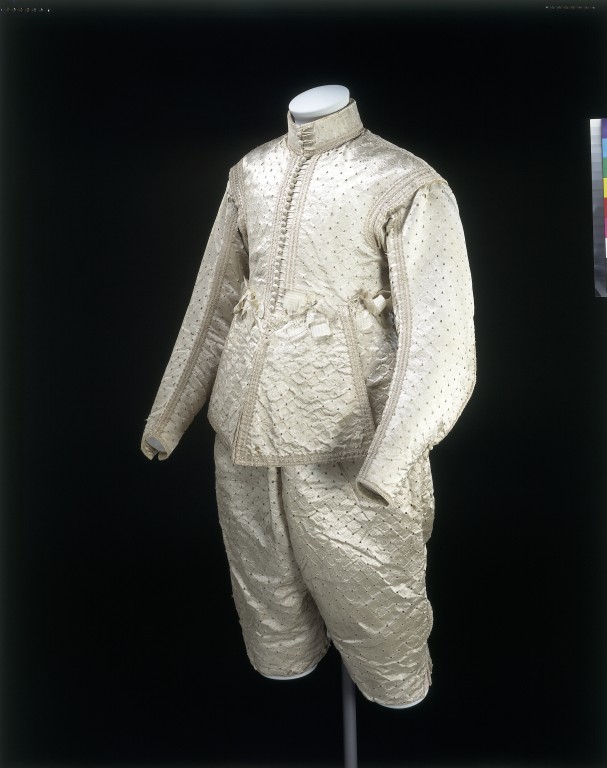 I had the opportunity to see this suit in person, and examine it closely when I was at the V&A last year.  It has a curious and sad history.  This white satin suit, which is regularly pinked with tiny star shaped holes over its surface was made in 1630 for a wedding, a wedding which never took place because the groom died of small pox days before the event.  So this suit comes down to us virtually unworn. We can assume he tried it on at his tailors while it was being assembled, but since then it has had no one to wear it.   What is also of interest is how clear the elevation of the waistline is. During that period the waist for both men's and women's clothes rose to just below the ribcage a curious fashion which hasn't really ever returned. 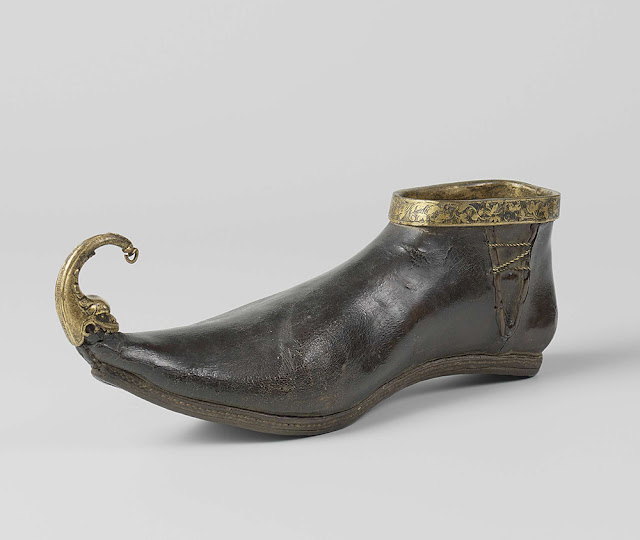 This is a type of shoe called a poulaine.  It's from between 1400 and 1450.  The body is leather and it had gilt copper decorations on it.  The person who wore this, and yes they really were meant to be worn, must have had narrow feet with low insteps to get into them past that metal ring.  There is also on the toe point a curious thing.  We have heard the phrase, "rings on her fingers and bells on her toes".  It refers to the fashion for attaching small bells like modern jingle bells to the toes of poulaine style shoes, so there would be a pleasant ringing as one walked.  Frankly it must have gotten annoying after a while. As this style of shoe goes, this is a fairly restrained one.  There are extant pieces with toes that extend much further out than this. 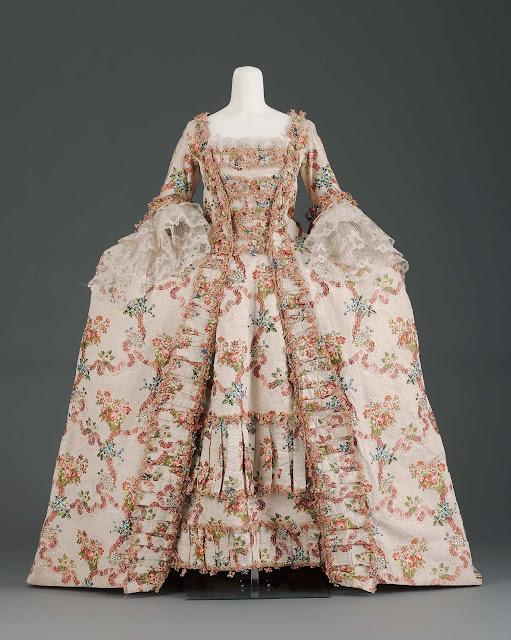 Last up today, this utterly charming example of the robe a la Francaise.  There is something deliciously playful about the pattern of undulating floral ribbons in the textile, augmented by the lavish use of fly braid on the underskirt, robings, stomacher and cuffs of the gown.  As well, the double tiered engagentes, or lace cuffs emerging from the sleeves add another frothy, light note to the entire thing. This particular example is practically the textbook expression of rococo style. Indulgent, extravagant, frilly, and sentimental, it ladled decoration everywhere it could, most often with imagery taken from nature.  It's a curious thing that such an immensely artificial style should rely on the natural world for the bulk of its decorative motifs.  Perhaps it was a way of keeping one toe in the real world.

And that, my friends is the collection for this week.  I hope you've enjoyed the trip, now go enjoy your weekend!