Repeatedly through our history the Attire language has surged into a new phase of expressions, by not only dropping the colloquialisms of the prior era, but by looking backwards to another age.
The first time in Western culture that we can see this with any clarity is the relaxation of shape and ornament that occurred after the change from the Reformation to the Restoration in England in the 1660s.  Overnight the dour and subdued shapes and styles of the Reformation, with its Puritan ethics, were swept aside to be replaced by softer, looser, and far more frankly sexy clothes for both genders.  But the salient point in this discussion is that the inspiration for this change was drawn from the classical world and its surviving art. 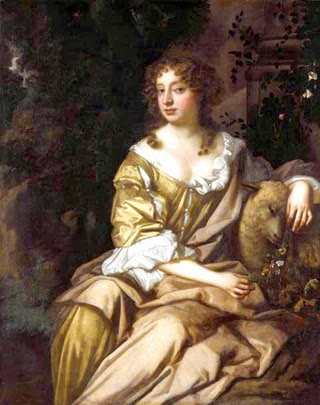 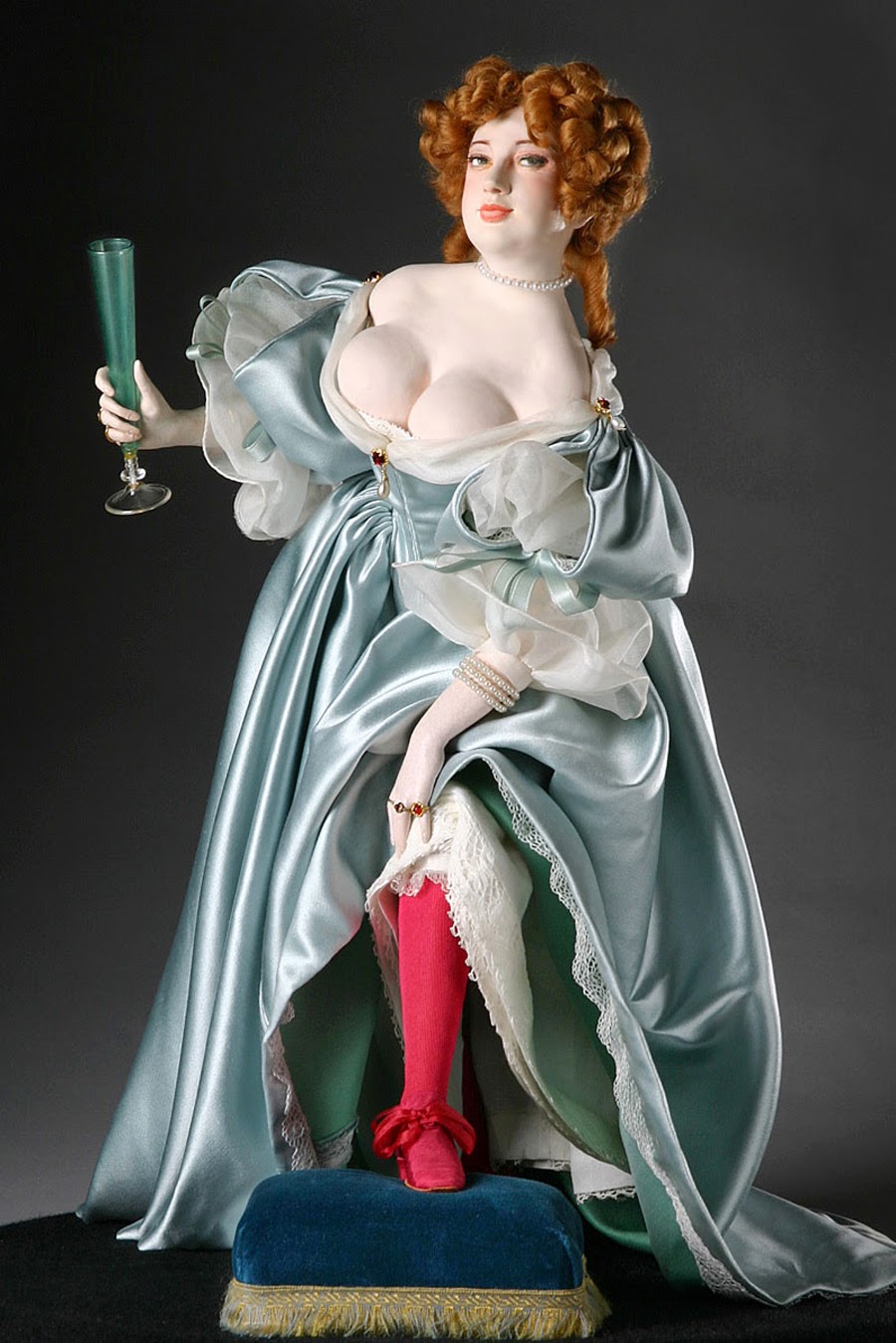 It is surely difficult for us, from our distance, to be able to understand how it made itself known in manners of dress. But mostly it was in a desire for looser, more easily draped and fitted clothing. No one could ever look at the garments of classical Greece and equate them with mid 17th century English attire, but the people of that day could, and did.  For them, the addition of draping that was not rigidly structured was enough to evoke that earlier day.
And the notion of referencing a previous age was not unknown in Fashion. Court masques had routinely called up their versions of ancient apparel to costume the folk who played around in those entertainments. So it wasn't much of a stretch for it to filter into more widely known clothing styles. 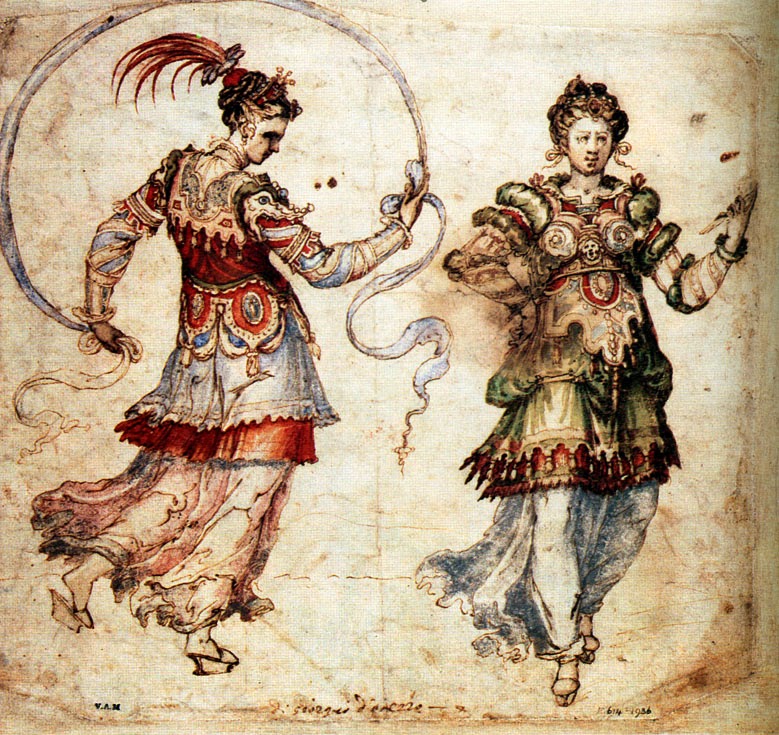 Masque costumes by Bountalenti
The next time we made a real forward movement was the period before, during, and after the French Revolution.  While Marie Antoinette was on the throne, she championed the simplifying of dress in her later days, while she clung to the teachings of Rousseau.  Though the French people chose to deride her for it, saying she was denying people livings by such simplicity; she, oddly, presaged the very styles that would come to symbolize the revolution.  During the revolutionary period, a relentless removal of furbelows and ornament created a timeless sense to the clothes being worn. And immediately after the revolution, clothes acquired a look that came as close to realizing the Greco-Roman past as any ever devised.  Women were seen walking in Paris in midwinter, clad in sheer muslin dresses, devoid of decoration, with only thin soled slippers and a shawl to protect them from the often fierce Gallic winter. 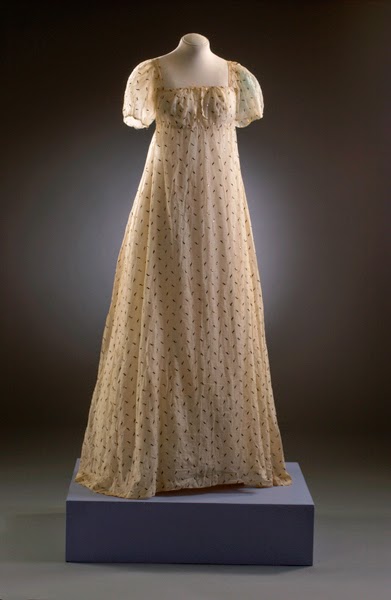 (You will have noticed that I'm not speaking of the men's clothes.  I cannot in this instance, because men's styles had already begun that long process of ossification that resulted in the dim, sad shape and palette for suits we now have for men.)
Before the end of the 19th century Dress Reformers and the Aesthetic movement tried, with partial success, to move the conversation forward again.  And again the past was the source of inspiration.  This time though, it was the Medieval Era that took the stage.  "Greenery yellery" clothes dyed in natural dyes and devoid of corseting, began to be worn by women of style, and with enough social status to step aside any strictures of propriety.  Dresses made with long hanging dagged sleeves, and high waists recalling the illuminations of the Duc Du Barrys Book of Hours became a fashion to be dealt with.  No, it didn't make a huge impact at the time, but it did set the stage for what was to come in the 20th century. 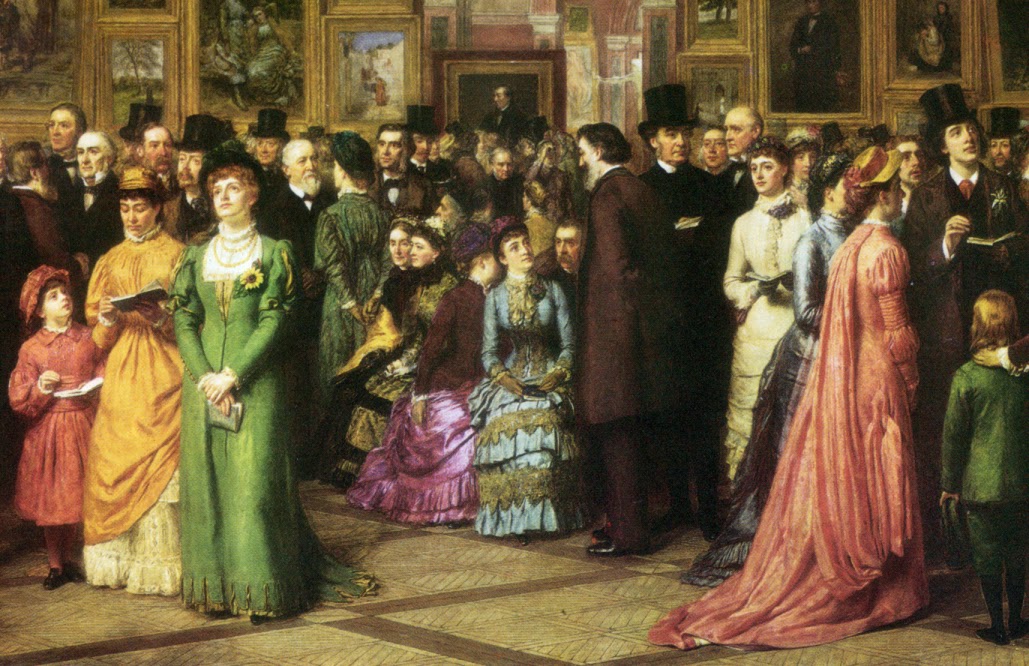 William Powell Frith- A Private View At the Royal Academy-1881 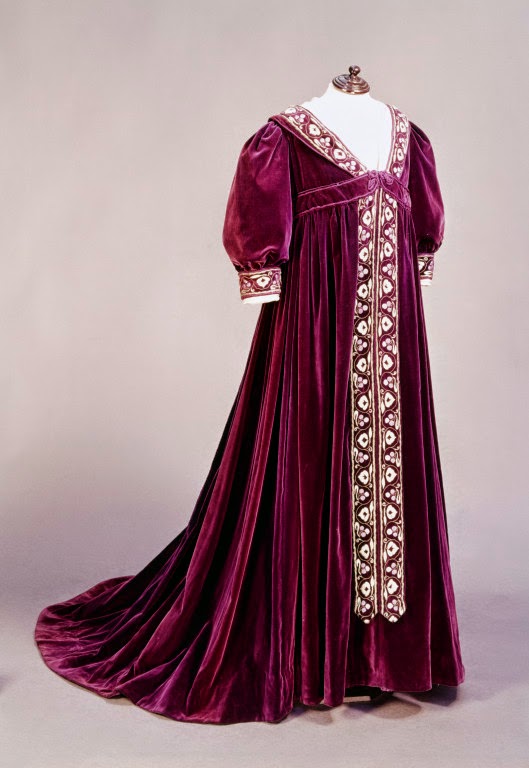 Once the clock ticked over to 1900 things changed with an increasing rapidity, that has yet to falter.  By 1910, super stylish women were wearing bifurcated dresses, with hemlines that exposed the ankles.  This may seem silly to us, but remember, prior to this time dresses hit the floor and ankles were hardly ever seen. So they therefore gained considerable allure for their rarity.
The 1930s, with the Great Depression saw another return to classicism, with the bias cut evening dress so very often referring to the ancient world, and in particular the work of Madame Gres, whose tightly gathered silk crepe gowns are still the visual definition of goddess dresses. 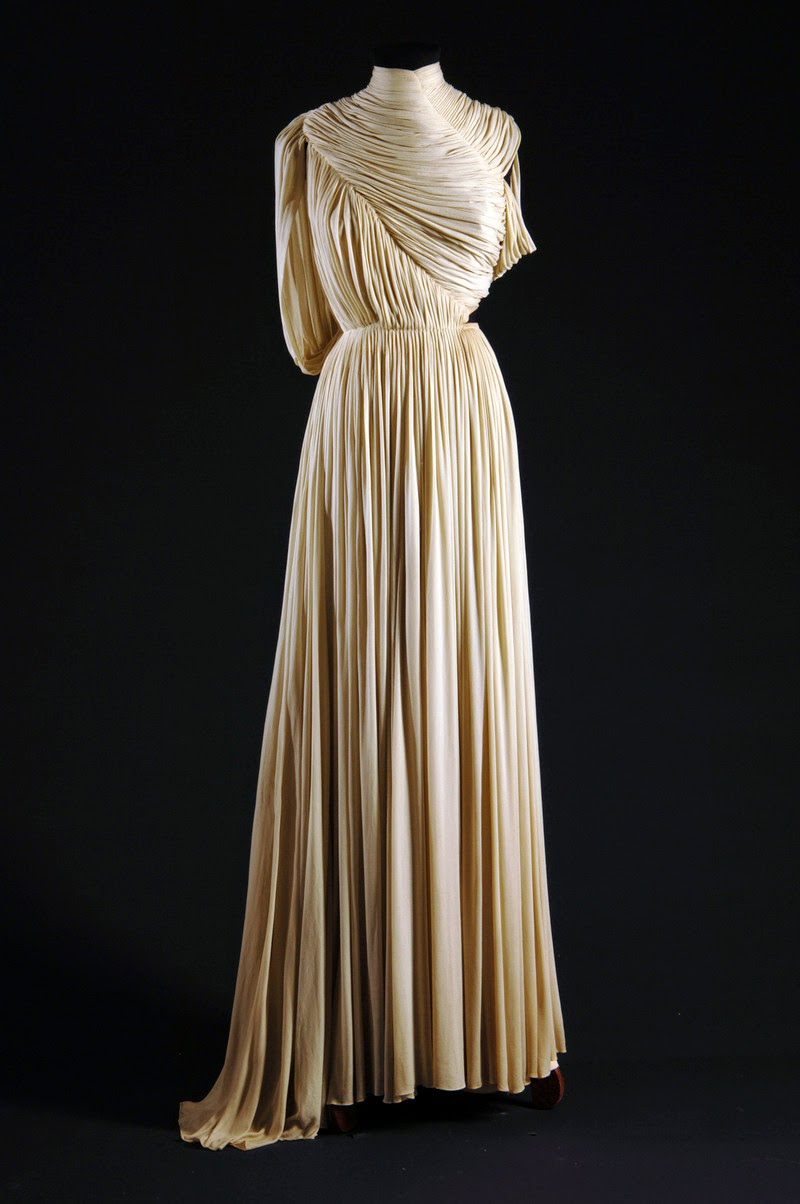 The post war era saw us moving forward again by looking back, when Dior tried to recall the 19th century with his abundant and prodigiously womanly clothes.
The later 60s and 70s saw us drawing strongly from the 20s 30s and 40s in an effort to break with what was precieved as a too strong connection to a narrow stylish vocabulary. We were, as a culture, attempting to embrace for the first time, a true world Attire language.  We failed, by the way.
And ever since then there has not been a single collection year that hasn't taken a good deal of its overall look from some other time. 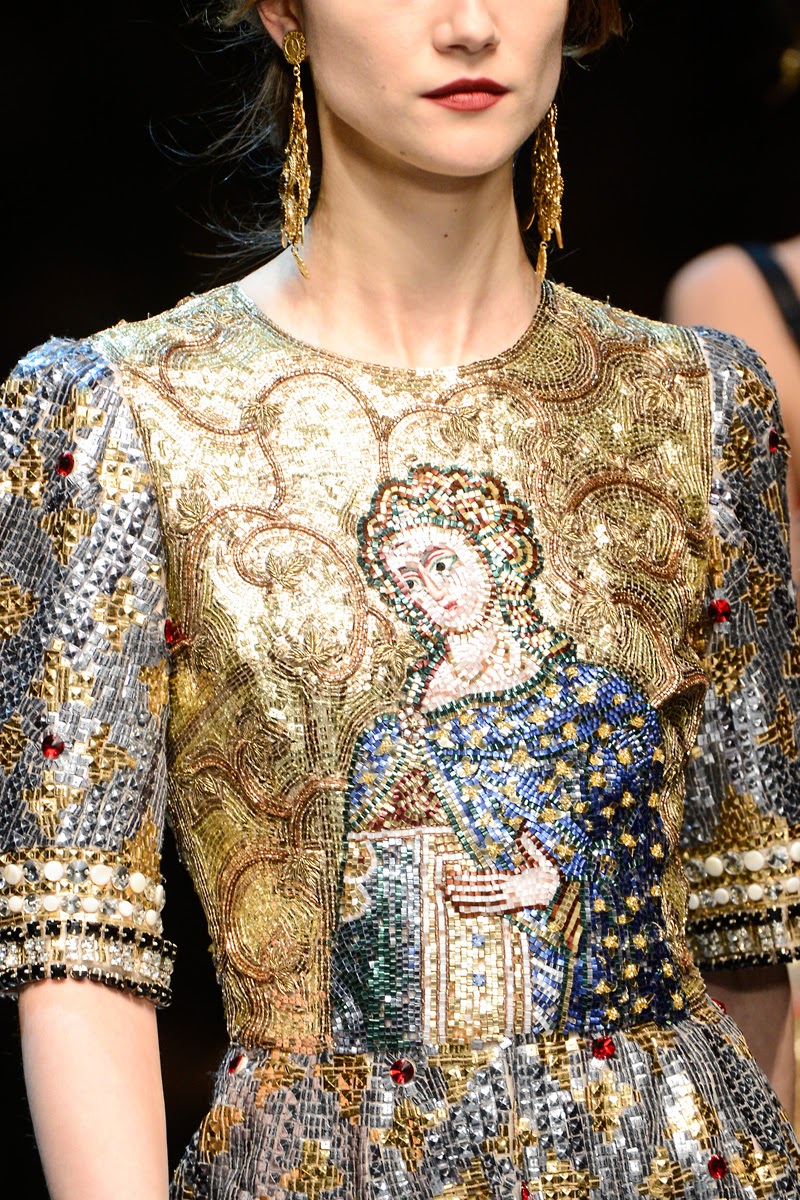 
We move forward, by looking back.  Sure, we draw inspirations from the past, and one can say with authority that we should look to the future; but the future without reference to the past is a dangerous, and ill-informed place. Its not a place I want to be, myself.  We gain so very much by looking back; not to live there, but we get perspective and context that aids us in facing the challenges of a new day.