Welcome back, my friends to another round of What's Hiding Inside His Head?  it seems there's an endless supply of stuff, fluff, and wonder, so lets start the game! 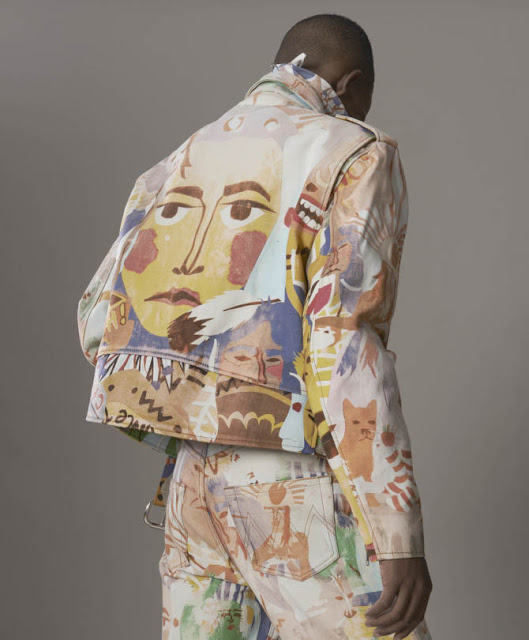 The Art to Wear movement, which really got going in the later 1970s has never truly grabbed the greater public consciousness, though museums have mounted quite good exhibitions of items it.  With changes in technology, clothing like this, which is only nominally Art to Wear, could become fully representative, based on digital printing, and 3D printing, both of which advance nearly daily.  It takes little imagination to conceive that you could go to a digital printing house armed with your cd rom of imagery, and have the textile you desire printed for you, and then take that same stuff to a tailor and have it made up into a truly unique garment that expresses perfectly what you wish to convey. Designers are already doing this, it will only be a matter of time before it becomes something all of us will consider as a normality. 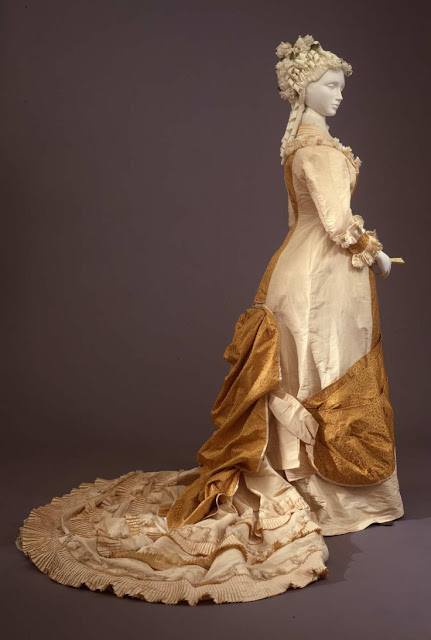 To me, few kinds of Victorian garments more effectively relay the obsession with class distinction that pervaded the time better, than the afternoon dress.  This was a type of garment only worn by wealthy women, with significant household staff, who had nothing more onerous to do each day than receive callers in the afternoon, and chatter over tea.  It was a garment style that was designed to display as much wealth through its construction details, and fabrication, as possible; it was also meant to illustrate an unassailable rectitude.  A lady wearing such clothing was assured of her status with her friends and acquaintances.  This frock, of plain weave silk and an expensive gold brocade is trimmed out with yard after yard of tiny knife pleating, which all had to be done by hand and laundered most carefully.  It was unlikely, though that this dress ever saw soiling, as it never left the drawing room accept to ascend, and descend the stairs, or order the servants about. 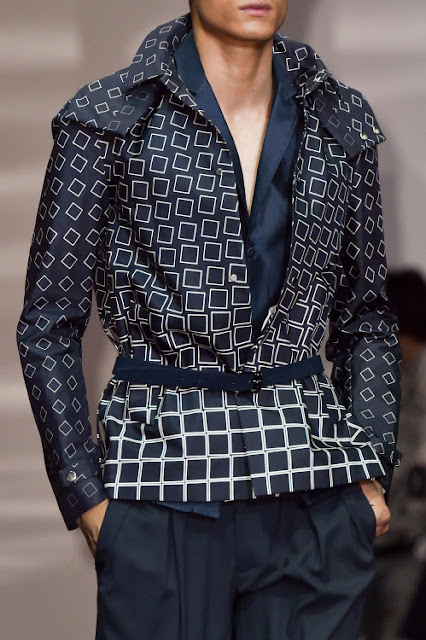 Another example of the general trend towards relaxation of menswear rules and regs.  This example, from Emporio Armani, really works for me.  I love the interplay of pattern in the sharp looking navy and white combination.  The only thing I dislike about this is the apparent lack of pockets in the jacket. Considering how much folks carry about these days, that seems an essential to me. 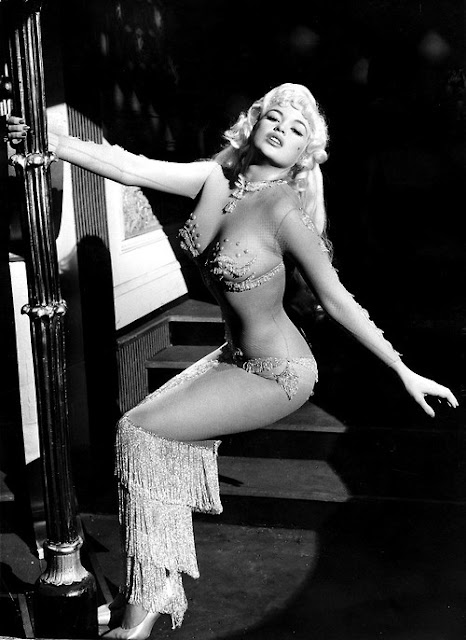 Miss Jayne Mansfield, being ever inch the over the top sexpot. As ideas and ideals about female beauty, especially sexually charged beauty, changed over time, the volume, as it were, of what was presented to the public went up, and up again.  That increase of volume was balanced by a decrease in coverage, till we get to costumes like this from "Playgirl After Dark"-1961.  Stretch netting, some strategically placed beadwork, and layered bead fringes. That's it. Oh, and lots, and lots of deeply processed hair. 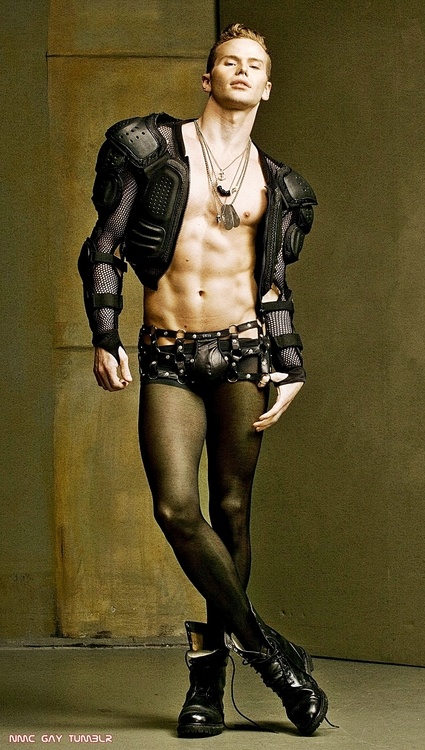 These days the boys are getting the sexpot treatment too, which is only fair, after all.  Now, from an Attire standpoint, what intrigues me about this image, is the scattershot of fetishes in play all at one time.  We have the military boots and dog tags to cover the uniform fetish crowd, pantyhose for the cross dress lovers, strappy, studded leather briefs with requisite codpiece for the leather fans, and then that oddly Sci Fi/Football jacket, so we get sports with a hint of cosplay thrown in.  That's a lot of look, as we say these days.  I suppose the message coming at us is that this fella is game for pretty much anything.  As well, the increasing amount of such overtly charged imagery will ultimately, in my mind, decrease its ability to affect us in the way that it used to.  Sure, things like this still have an edge to them, but in time our reaction will be far more blase'. 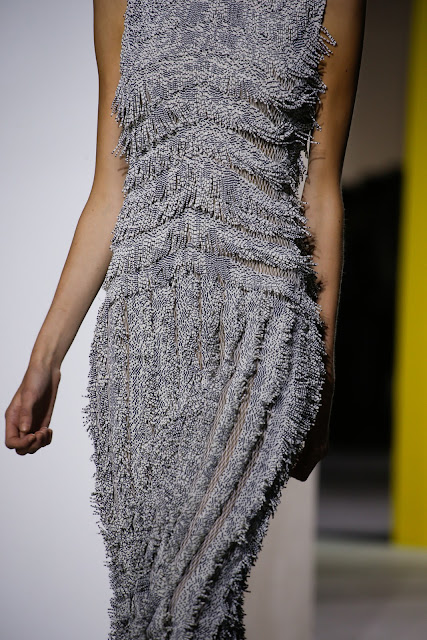 Sometimes a texture is so compelling that you almost cannot resist touching it.  What makes this Boss designed dress so sexy is not its body hugging shape as much as it is that gently mobile texture that is somewhere between fringe, feathers and fur.  Who wouldn't want to brush their hand over that, just to know what it feels like?  A person wearing such a textile is that much more likely to receive attention. A lot of it. 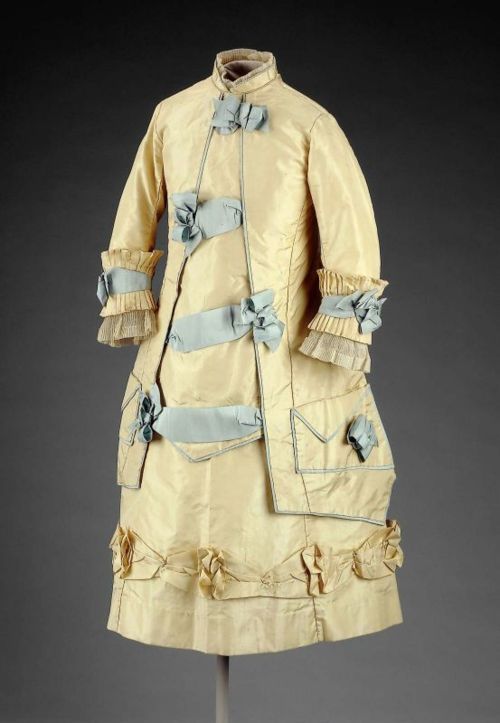 This is how a young girl from a well to do family would have been dressed in the 1880s.  Clearly a young girl was being trained to restrict her movements, and content herself with being confined.  The very design of this dress, with its crisscrossed ribbons creates an impression of circumscription.  This young person was in the process of learning the endless rules that would govern her life as an adult in society, and the clothing she was given to wear did everything to support that.  The other sub text here is the ongoing training to become the decorative adjunct to a wealthy male.  We still haven't fully let go of that, have we? 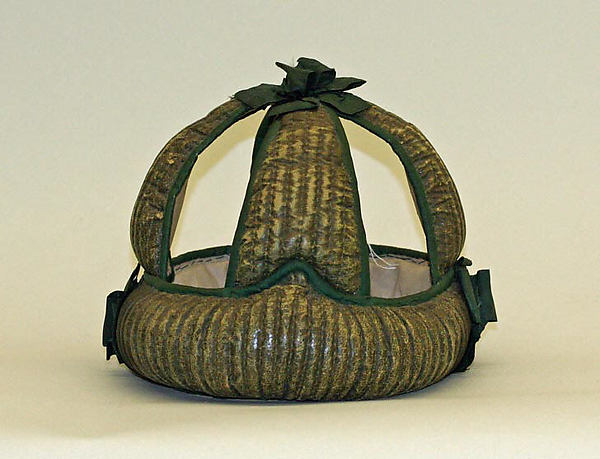 Here's something curious.  We have all seen young children with helmets on to protect them from falls and such. This is a precursor to them.  Called a Pudding hat, it was popular in the 1700s as a protection for small children just learning to walk.  They were usually made by the new mother out of scraps. This one is glazed chintz, heavily padded and quilted, and edged with dark green ribbon.  They were meant to be worn straight across the brow above the ears.  Fortunately the children wearing them would have been too young to feel ridiculous in them. 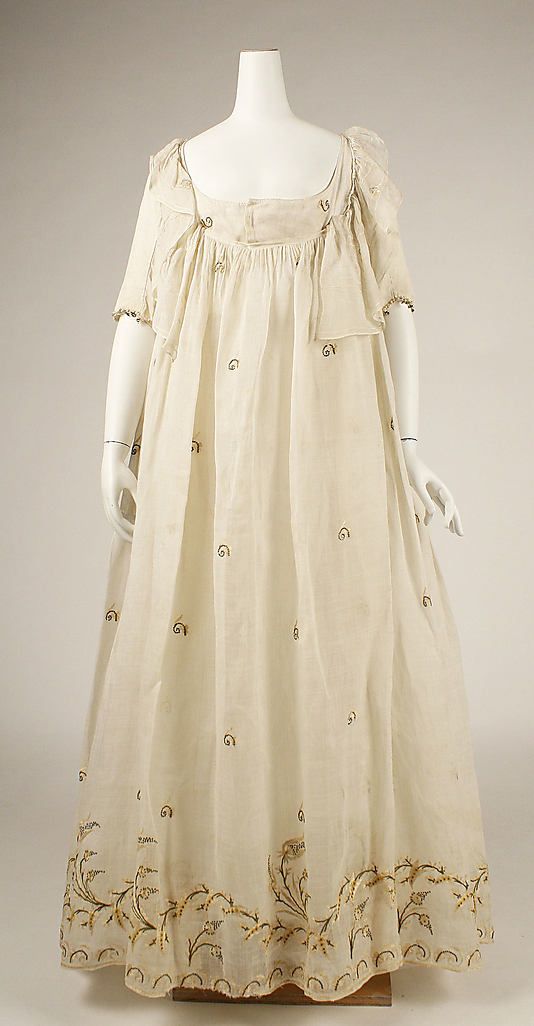 Something else from the late 1700s.  This muslin gown is from 1790, and shows us the beginnings of the style that would dominate for the next 2 decades.  It has the extremely high bodice already, but the volume of the skirt is much greater than it will be in just a few years, and the sleeves, here at elbow length, will shrink to nearly nothing.  The hanging pieces on the sides of the bodice are meant to be artfully arranged in folds and pinned into place.  For women who had spent their lives in the rigid and cumbersome clothing of the times, it must have been a daring, and welcome relief. 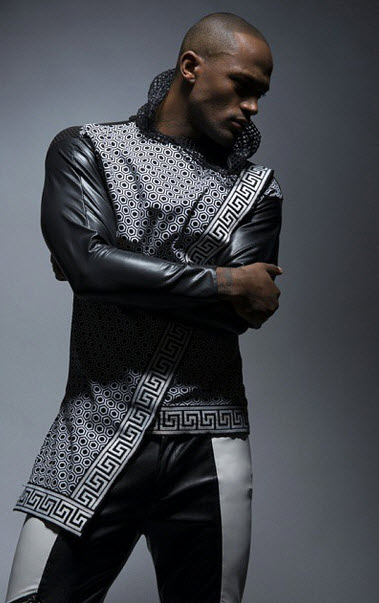 Patterns in combination can be daunting, or dazzling depending on how they balance with each other.  This is a great example of two patterns  that work in harmony perfectly.  Of course one way they connect is by color.  The second is that they are both repeating geometrics. The third reason is the difference of scale. If they had been closer to the same scale the eye would have more difficulty traveling over the garment easily. 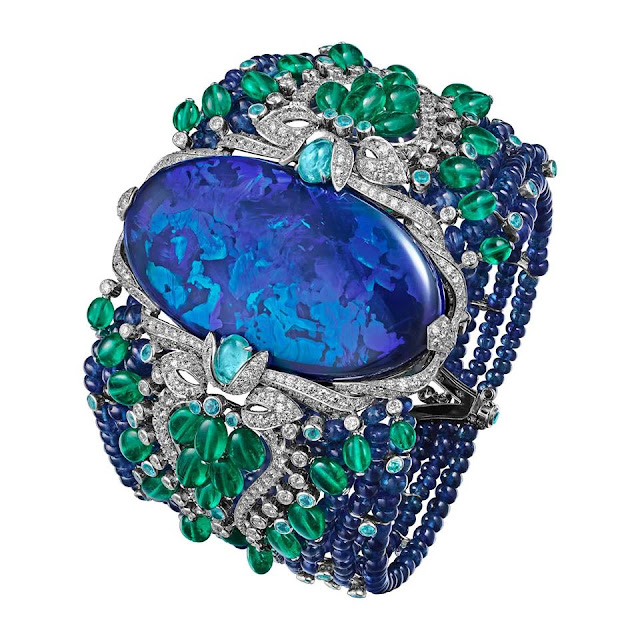 No one does over the top, quite like Cartier.  This is the Lagon bracelet. One massive blue opal, and hundreds of sapphire and emerald beads, mounted in a platinum frame covered in diamonds.  Quiet little piece, this. Its perfect for doing the vacuuming, or shopping the farmer's market.  Right. 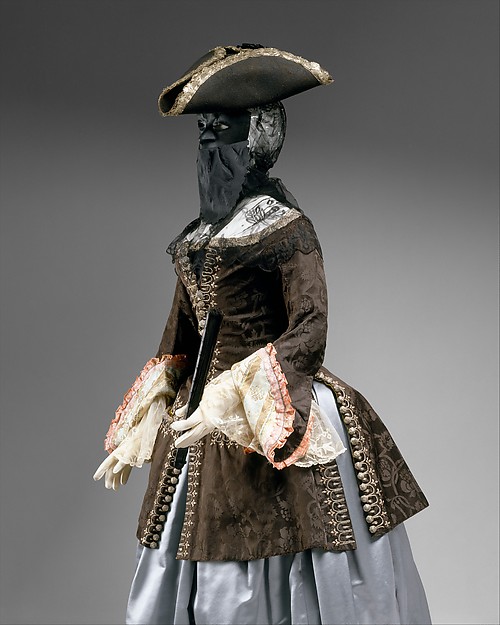 To finish the day, this delicious women's jacket from 1740.  Made in Italy, this the poster child for the popular menswear inspired outerwear a lot of fashionable ladies were wearing. That it survives in such splendid shape is remarkable, since outwear tended to be remade till it fell to pieces.  The surface textile is a deep brown silk brocade.  The large turned back cuffs are edged with box pleated pink silk ribbon, and the lining is a ribbon brocade with a  Chinese influence. The lace seen inside the sleeves is actually attached there, not a part of  the dress beneath. The way the jacket buttons is what marks it, more than any other way as being from the 1740s. it was the fashion in men's clothing that both the waistcoat and the coat had ranks of buttons placed right next to each other from neck to hem.  This accomplished two things at once.  First it controlled fit precisely.  Second it was a great way to display wealth.  This jacket has 72 buttons between the two side vents and the front closure.


So that's it for this week.  I hope you enjoyed the ride.  Now get out there and have a great weekend!