Before we begin the perilous trek known as the Holiday Season, its time for another skip through the recesses of my cluttered brain.  Here comes this week's round dozen of random finds. 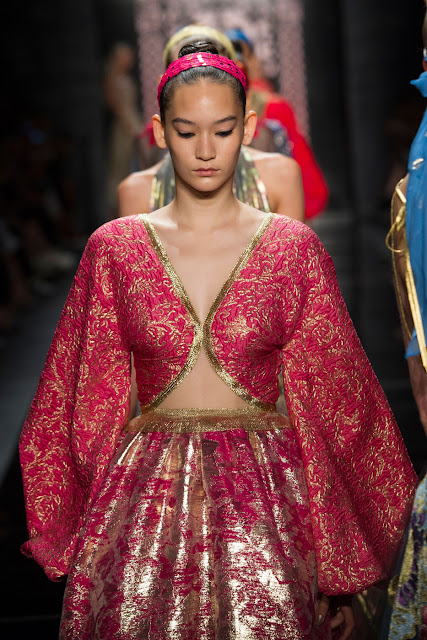 This ensemble by Reem Acra from the Spring/Summer 2016 collection, is a wonderful example of the potency a textile can bring to a design, and subsequently to the relayed visual sentence.  The skirt is a basic gathered rectangle. The top is essentially two rectangles that have been joined front and back and then shaped to the body on the sides. What makes this pair of pieces spectacular is the luxurious metal threaded fabrics in play.  Where these garments could have been severe, even bland, they are fantastical, and lift remarks the simple shapes make, far above what might otherwise have been communicated. 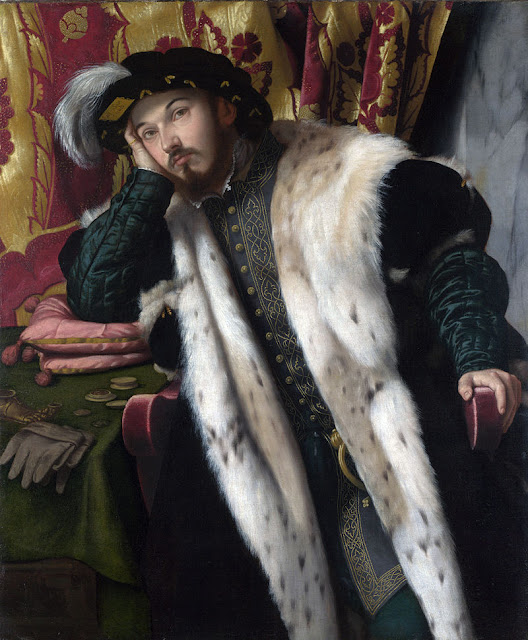 This is Count Sciarra Martinengo Caesaresco as painted by Moretto de Bescia in 1542.  Apart from the desire to express wealth and status that is present in every part of this outfit, this is also something that's meant to be practical, at least for a member of a noble family.  The doublet he wears is heavily padded and quilted for warmth, and the short sleeved coat is fully lined with fur, where it might have only had a fur collar. So that too adds to its protective nature.  What it also does is add to his physical presence.  Perhaps the most significant aspect of menswear at this time was breadth.  A man's importance, his affect was tied to the volume of space he took up.  The vast fur collars of these loosely fitted coats extended the already wide shoulder line in vogue, and made even the trimmest of men take on a blocky, monolithic appearance. 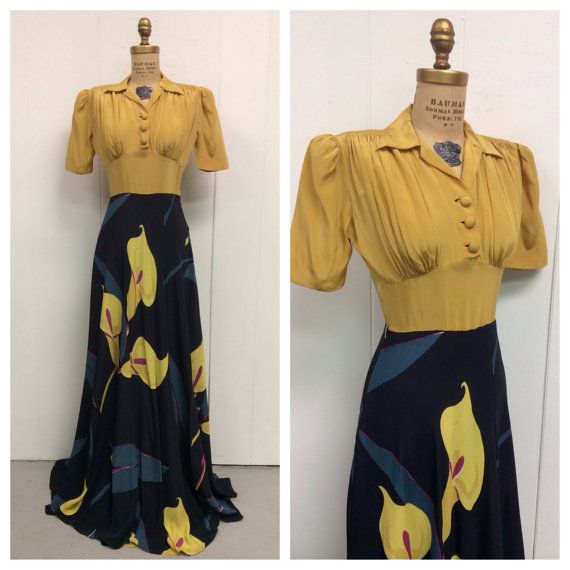 Before the concept of the dinner dress disappeared entirely from the Attire language, (its now a word unspoken),  it had its last iterations during the 1940s.  Dresses like this one, a bit more casual than a full evening dress, but still long, were the accepted norm for dinner party entertaining. This style idea, this interim word, came into being because of wartime restrictions on textiles at first.  And it also took into account the negative opinion of lavish social events that existed then.  It was considered unpatriotic. Once the war was over, the sense of relaxation that happened as the boys came home, and normalcy began to emerge again, brought with it a loosening of social rules.  It seemed perfectly normal for a hostess or dinner guest to appear less formally than prewar rules would have permitted.  As such its also a harbinger of the greater shifts in society that would be coming along in just a few years, that would challenge everything we had established. 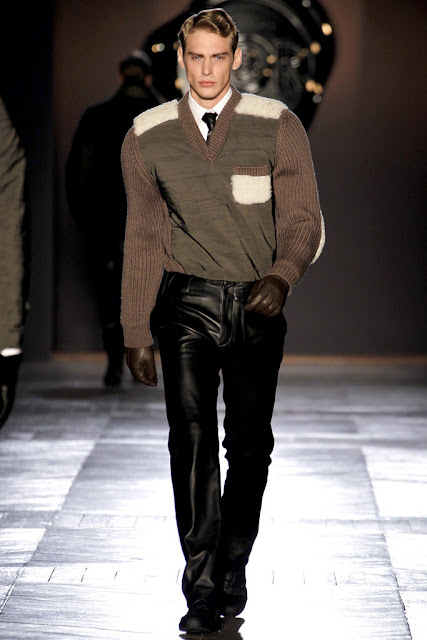 I posted earlier this week about menswear, and mentioned the continued use of military tropes to forward fashion looks with an obviously masculine tone.  Here is a great example.  Viktor and Rolf, Fall/Winter 2012.  The sweater is in colors associated with military uniforms, it has epaulettes. It even has unusual shoulder pads meant to increase the bulk of the deltoids.  Then pairing this with a crisp white shirt, narrow tie, and gloves only amps up the military associations.  These are guy clothes, manly man gear, regardless of how polished and perfected the model is. 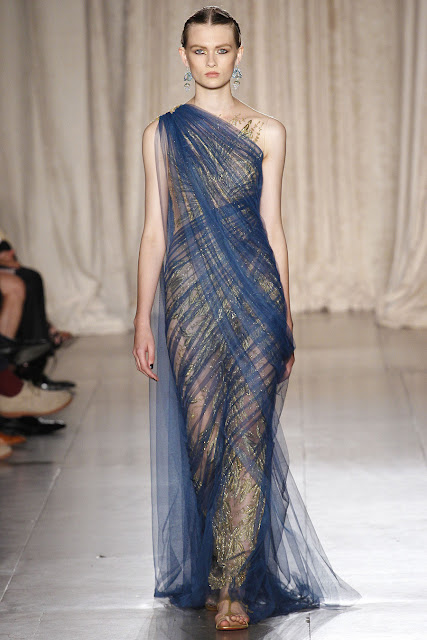 So often the sheer trend just ends up looking tawdry and vulgar.  But every now and then something comes forward that takes the sheer idea and allows it to be dreamlike and, while still sexy, no longer, overtly so.  This effort by Marchesa really works for me in that regard.  The eye is not spending its time focusing on bare flesh.  There is enough going on visually that though you see the body beneath quite a bit, your eye is traveling over the variations of density and texture created by the layers of chiffon, and beading.  Psychologically, the choice of navy lends a seriousness to the design that tones down whatever prurient associations it might have had.  We think of navy blue as a color of trust, stability, and strength. So, the design becomes sensual, not sexual. 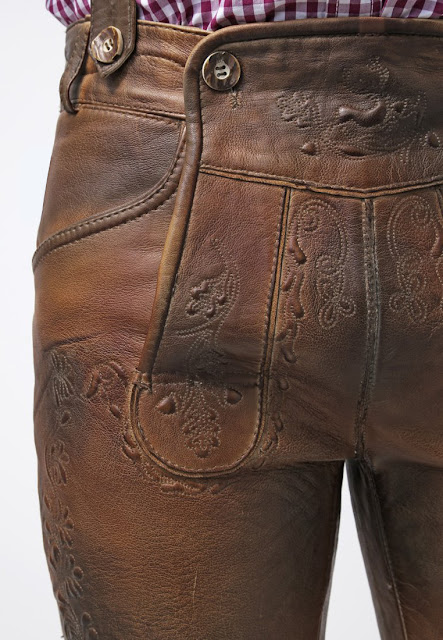 Here is a garment unique to Germanic cultures, lederhosen.  This pair is beautifully assembled, and the decorative work includes trapunto scattered throughout the embellishments.  Though you wouldn't think so to look at these, lederhosen are apparently quite comfortable, according to a couple of folk I know who have worn them. And looking at the quality of the work here, I suspect these could survive an atomic blast unharmed.  They are built to last. 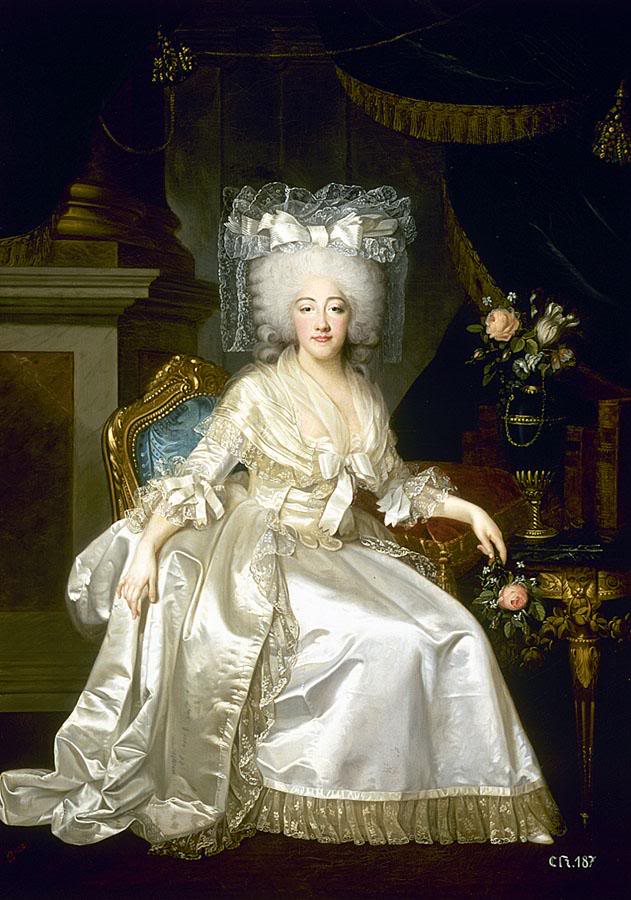 Ahem.  This is Marie-Josephine-Louise de Savoie, Comtesse de Provence, as painted by Lefevre in 1786.  She is wearing a white satin robe a la anglaise, with the sheer fichu that had become so popular.  The fichu, especially ones like this were meant to be up scaled versions of the shawls and scarves women of the working class wore to keep warm as they worked. Her version is trimmed with lace and ties in front with a satin ribbon.  Her dress is relatively simple for the time, and the trimmings confined to a few lace ruffles at the underskirt hem, and along the dress front opening. As such this would have been a garment for less formal times, perhaps for entertaining guests in the salon.  The dress could have been made suitable for more formal evening events with the addition of a heavily jeweled and bedecked stomacher,  rather than the plain one seen here. And lastly, that variation on a wifely cap she wears would not have been suitable for evening. That is meant for day, and for indoor activity. 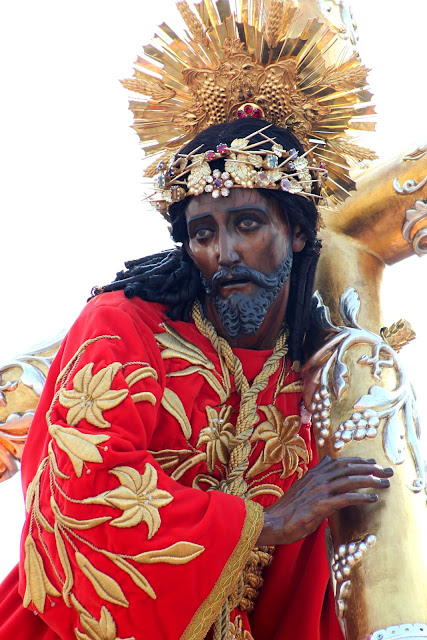 We cannot even leave inanimate objects out of the Attire conversation.  We even use apparel to enhance the statements made by our religious icons.  What I find intriguing here, is that this Passion of Christ figure is so laden with luxury that his struggle and pain are erased from the image.  The crown of thorns is so bedazzled that we can scarcely find the thorns, and those have been stylized out of danger. The robe the figure wears is densely worked with gold bullion embroidery, and the material is silk.  Both are quite at odds with the message intended by the sufferer.  It seems the desire here is to both make this painful experience easier to digest, and to somehow elevate it above the gritty reality such an event would have had.  We just can't leave things alone. 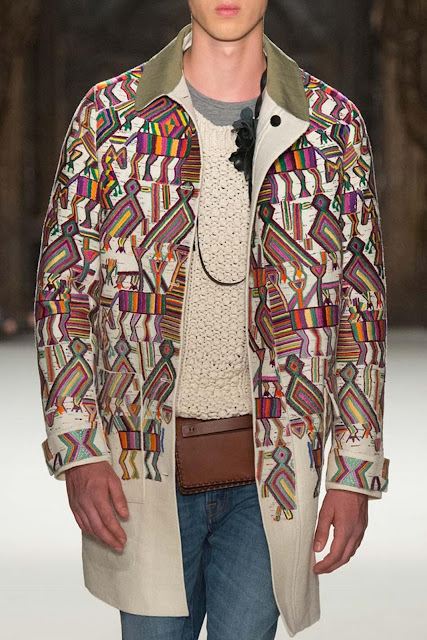 Kind of a blanket coat, but not.  This is a delicious looking coat, and one I would love to own and wear.  And naturally, what appeals most to me is, well, color!  Yes boys, color is not your enemy.  It is not a stranger on the street to be shunned.  This Valentino coat is a stunner, and could look great on lots of different fellows.  Its a classic car coat cut, and as such could be endlessly useful.  More colorful coats. please! 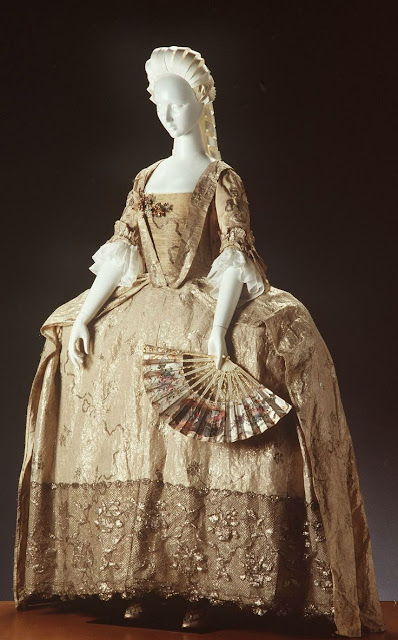 Though side hoops of far more prodigious dimensions were in use throughout Europe, this lady would still have grabbed a lot of attention.  This manteau de cour from 1760 is made from silver brocade, meaning real silver threading, and trimmed with a huge swath of silver lace.  The outrageous expense of these materials makes the simplicity of the dress unimportant. Those who saw her would have known instantly that this was a person of consequence.  What makes silver brocade and lace so extra costly, besides the use of silver itself, is that the thread made from it by winding a thin strip of silver over a core of silk is very fragile. The silver can break easily, so making lace, which is time consuming already, takes considerably longer. The same goes with weaving with metallic threads.  The cost then goes up a great deal.  So, miss lady here would have been envied mightily. 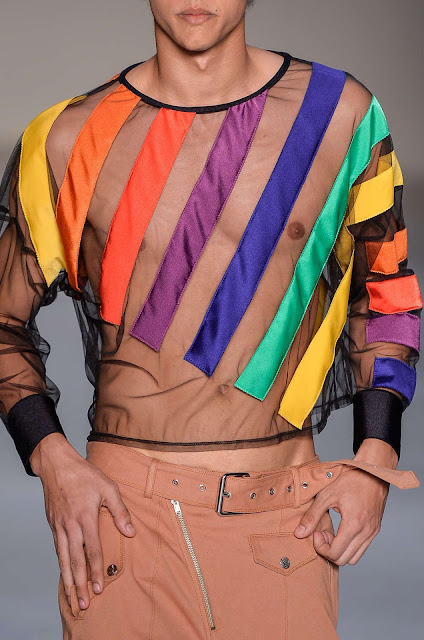 Can a garment be gay?  After seeing this I would have to say yes.  In fact this may be the gayest shirt in all creation.  Apart from wearing this as club gear, or as part of an ensemble on your next gay cruise in the Caribbean, this is an utterly pointless item.  Oddly, the cut of the shirt, and the position of the stripes does nothing to this young man to enhance him. Its just a disjointed seeming article that does little besides scream Gay Boy!  And that strangely putty colored, (is that a skirt?) doesn't work at all with the shirt.  Its just all quite, odd.  No real message conveyed, just gibberish. 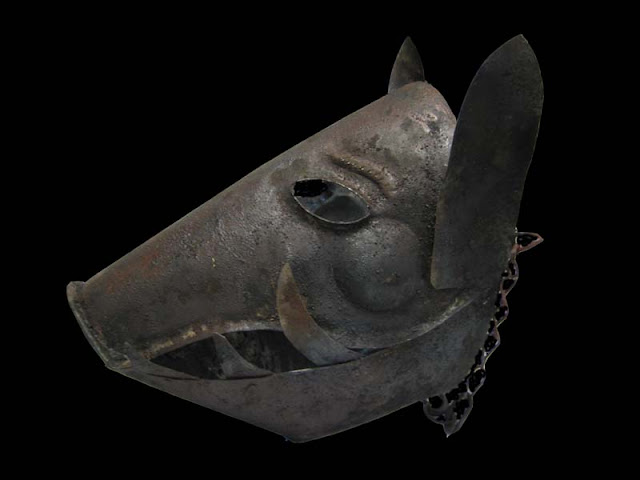 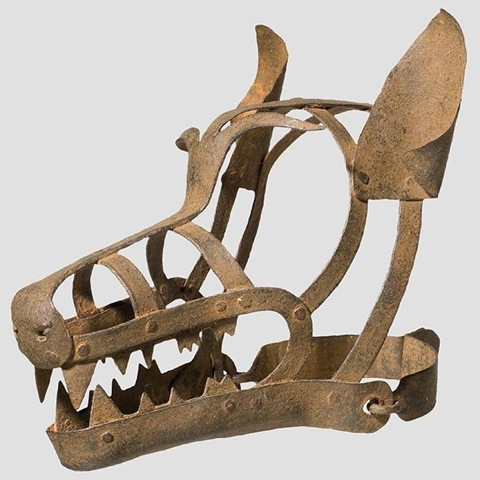 The final entries today are an oddity.  We even use apparel to chastise.  Throughout most of Europe, up until the 18th century, these masks were used as a form of public punishment.  Referred to as Schandemaske in German, they were used to correct fairly mild infractions like gossip.  It was also used for women accused of henpecking their spouses.  The English versions of these, called a Scold's Bride, actually had an internal plate to forcibly hold the tongue down.    These also transform the transgressor into an animal, diminishing the respect owed them.  Deeply weird, and sadly there are still places where such ideas are held in respect.  Fortunately, in Western culture at least, it has died away to nothing.

So that's the lot this week.  I hope you enjoyed it all.  Have fun this weekend!
Posted by Paul G. Ellis at 6:17 AM