It's December already and things are gearing up to the mad dash to New Year's Eve.  But we can't let that deter us from rummaging about in the muddle of images that crowd my head, can we?  No, we cannot.  So here is this week's sampling gleaned from the rubble. 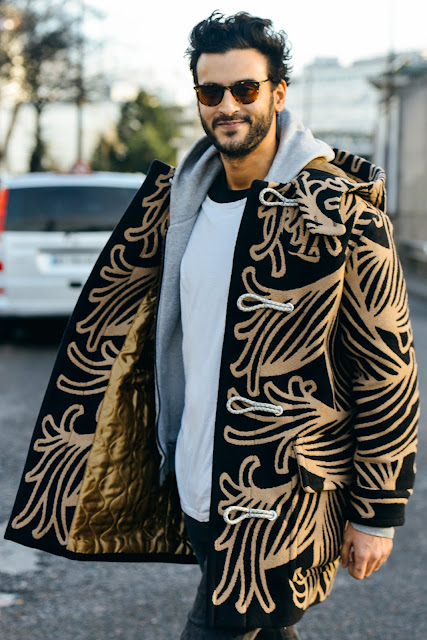 It is true that I do go on and on about how massively boring most men's clothing is. And certainly a good deal of the not boring stuff is far too challenging in terms of seeming too effete to play well for the majority of dudes out there.  This though, has a right blend of boldness, brio, and dash that makes it both exciting looking, and still plays within the space that confines modern menswear.  It's a classic duffle coat, even to the loop and toggle closures, but it has that amazing hugely scaled pattern.  Sure, it's on a scale that could only be worn effectively by someone who was themselves large scaled, but it still takes the range of menswear and broadens it a skosh, without taking it somewhere that would frighten the guys off.  Good work from Tommy Ton. Fall/Winter 2015. 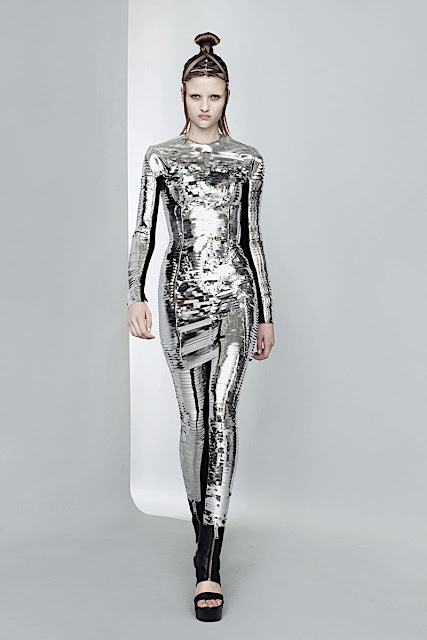 Speaking of challenges, there's Gareth Pugh, whose work I admire intensely.  What I love about his design aesthetic is that he is unafraid of creating fiercely strong images for women. This galactic warrior woman is clearly not meant to be someone to mess with.  I like that.  Far too much of design for women trades on sex first and maybe gets to some other place later.  I also love that he is not afraid of working with completely new textiles. In fact, he actively seeks them out.  This mylar coated fabric is worked as narrow ribbons, creating an armorial layer over the body, that is probably amazingly lightweight.   This level of shiny is coming on strong in design again, and it will no doubt sart getting expression in the real world, as well as on runways.  There are many applications of this sort of mirror polish look that could be spoken by regular folk. 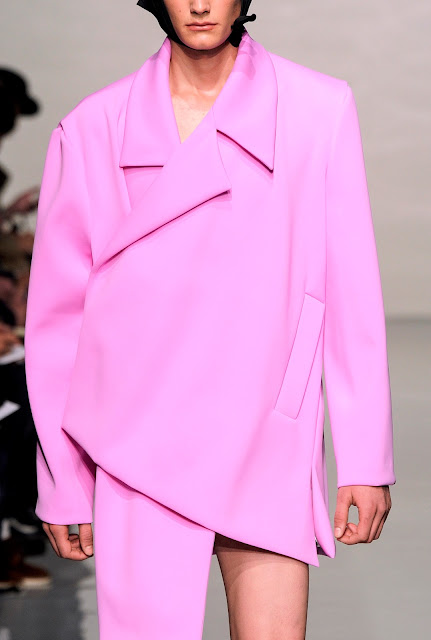 Challenge seems to be on my mind today.  The first entry plays well in the menswear Attire realm.  This one would be much harder to get the man folk to accept.  The deliberately off kilter shape, the oddly slouching sleeve, and the brilliant shade of pink would all combine to create a resounding NO response for the greater number of fellows.  That said, rendered in some other color, and fitted more closely to the body, so it refers to the shape beneath more, this idea of an asymmetrical coat could work.  It's sad, really, that we have established pink so completely as a lady color, especially such bright shades of pink.  It is a lively hue, and many guys could look terrific in it.  I will always be in favor of more color for menswear.  But we shed these cultural ideas only slowly. 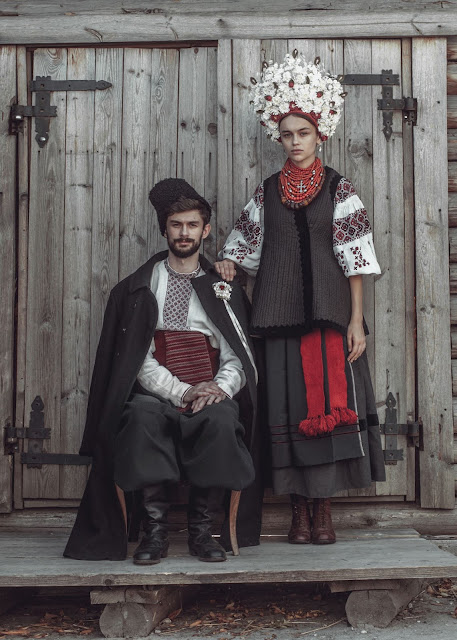 This image caught my attention because I cannot decide whether it is meant to be taken seriously or not.  Yes, the majority of this apparel is traditional dress from Russia, but the manner in which it is being worn makes me think something else is in play besides cultural reenactment.  I really cannot put my finger on what it is about this that makes me hesitate taking it at face value.  I suppose this makes it an even more interesting example of the Attire language in action.  We see one thing on the surface, but there are subtexts that convey something else, and add to the total conversation.  Of course, my position as an observer outside of the Russian culture makes it harder still to parse out.  What do you think? More challenge.  One of the ways that the design community, and fashion periodicals, are pushing things forward, trying to get men to see differently, and adopt new ways of dressing themselves, is to take the current manly, bearded, long haired guy thing, and work it like crazy.  The model here is wearing some pretty out there stuff.  A Commes des Garcons sweater and a pair of what are being called Bermuda shorts, by Ainer Turisbek.  The right hand image is of a cape by Walter van Beirendonck.  But because we can perceive him as masculine, this works better than it otherwise would.  Bermuda shorts with fake fur fronts?  Really?  But then again, crazier things than that have become enormously popular.   At the end, this is yet another example of how we are attempting to adapt to changes in our society, and our society's view of men. 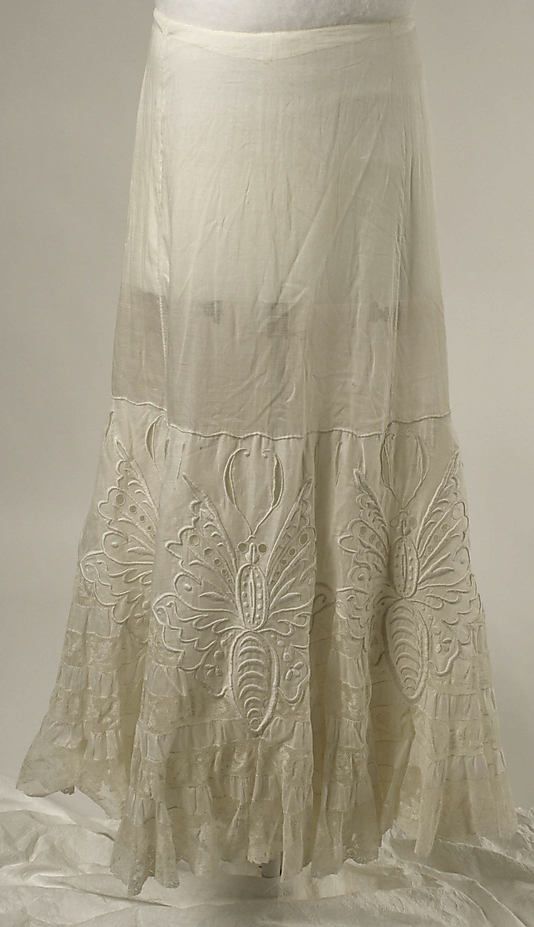 This is a petticoat from the 1890s.  I am including it here to show you all just how much work was brought to bear on things that no one but a woman, her maid, and possibly her husband would ever see.  The upper half of the skirt is exceedingly fine cotton mull.  The lower half is also of mull, but extensively, and beautifully embroidered with huge scaled butterflies.  But wait, there's still more.  The lowest part is alternating bands of inserted lace, and soft ruffles of the same cotton mull, all expertly worked.  To make such a garment would require incredible amounts of handwork, and many, many hours.  This is an amazing thing.  I'm grateful it survives to show us what we have given up in our rush towards modernity.

More sheerness.  And a man skirt to boot.  Actually, in this context, where I can imagine this as a beach cover up, it works for me.  I suppose too, that one day, seeing a man in black undies with a black chiffon floor length skirt would create not one iota of surprise.  What it says for me now is how fervently, and continually the old guard of men's fashion ideas, and the limited range of Attire words men can use is being confronted.  Never in apparel history have so many in your face disputations to the status quo appeared for men.  It is analogous to the massive changes that happened for women at the beginning of the 20th century.  And look how long it took for that to really take hold.  Who knows how long this process will take for the boys in the room? 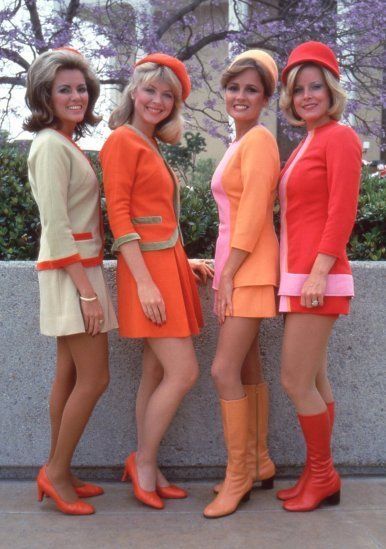 PSA flight attendant uniforms from the 1960s. These are examples of how much sex played a role in the way female attendants got presented to passengers.  Sure, the outfits are very stylish and on point for the time, but the undercurrent of sexy is strong.   Most airlines no longer pander to this sort of thing, dressing their female staff in business attire, more often than not.  But there was a day when the implication was that a stewardess was supposed to serve up more than just lunch and a cocktail, if asked.  It took the Women's movement to change that, and the way women got dressed changed as a result. 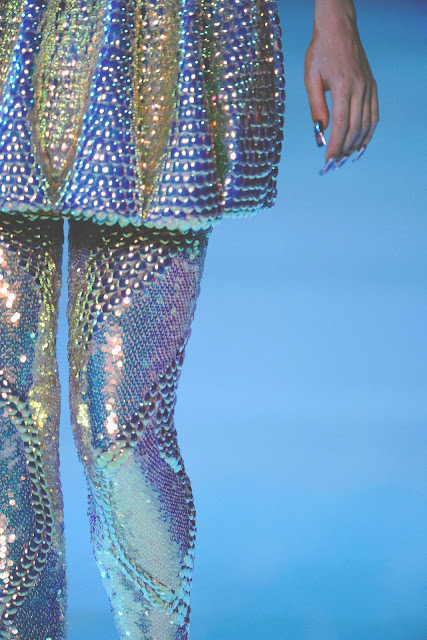 This detail image is of an ensemble from Alexander McQueen's last collection, Plato's Atlantis, from 2010.  The unique handling of the varied sequins on this create a sense of some fabulous sea creature, half mollusk/ half mermaid.  I find myself nearly hypnotized by the iridescent sheen and the twining texture.  You cannot look at this and not have some image come to mind.  Attire's power to communicate, in one image.

One of the things I find interesting about the clothing of the 60s and 70s was the attraction to rigidity in construction that was so popular.  I suppose part of that was because it is easier to create a sense of the modern, when the shape seems architectural.  In the case of this beach cover, the black banding adds to that, though the small scaled floral print, undercuts the impact a good deal.  Also, from a function point of view, such a firm structured garment is not really appealing as beach wear.  Nor would this move well while walking.  Looks great standing still, though. 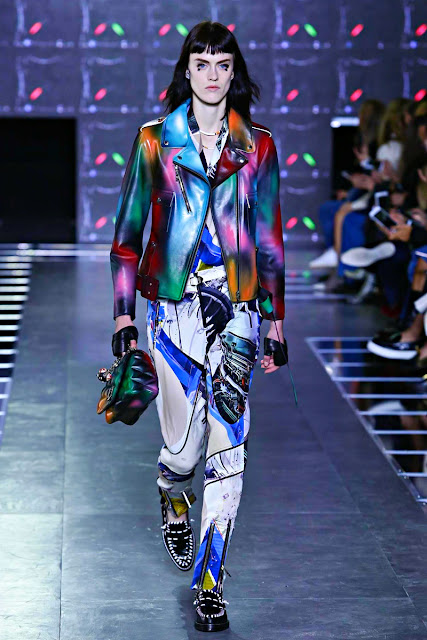 Few sets of clothing I've seen walk a runway better express to me the dichotomy, and the disconnect we feel in our society today than this Louis Vuitton does.  First, it's a high end design work, so it's fabulously expensive.  It has multiple clashing patterns and textures that manages, just barely, to coexist together.  The styling of the model is decidedly genderless. And lastly, it has references to violent, or at least disruptive action with the biker jacket, and the sharp spikes on the shoes.  Everything about this conveys messages that disturb, rile and confront.  Its a visual marker about the diffidence we are experiencing in our world as we struggle to find a new way to be.  We do not see a clear path, so we rebel, resist and pout. 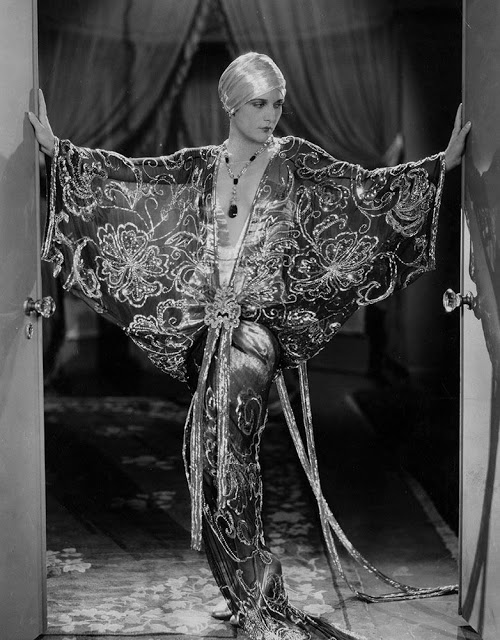 To finish up today, challenge filled posts, something gloriously gaudy, frankly silly, and not a little steamy.  This is silent film actor Evelyn Brent giving us the full on Femme Fatale.  It was the standard in Hollywood design to take the ideas coming from couture and amp them up significantly, all in pursuit of creating a true fantasy.  People going to the flickers in those days didn't want or expect realism. They wanted the world as it might be.  The film was Slightly Scarlet, from 1930.  The costume was by Travis Banton.  She played the unwilling accomplice in a jewel heist. This is supposed to be a hostess gown. Really?  Just what kind of entertainment is she hosting?  Any way you slice it, she looks fabulous.
Well, thanks for going along on this ride today. Enjoy your weekend!!!!
Posted by Paul G. Ellis at 4:01 AM