The great Wheel of the Week turns and deposits us, yet again at Scattertime.  Here is this week's compilation of randomness.  Have fun!
And Here
We
Go! 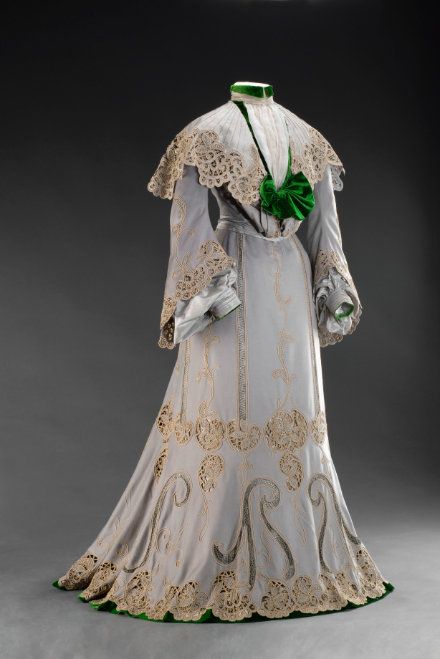 1902, the beginning of a new century, and the beginning of the end for a whole concept in how women dressed and how they thought of themselves.  This gloriously lovely day dress is for a woman whose life revolves around socialization, and giving directives to servants.  She would not have been a lady who did much work on her own, besides embroidering cushions and making quillwork samplers.  As a result of that reality, this garment is complexly worked with inserted lace pieces, and finished with a few bold strokes of brilliant green velvet to give the whole thing pizzazz. As a design, it is perfectly balanced, and as a signal of an era's end, it is poignant. 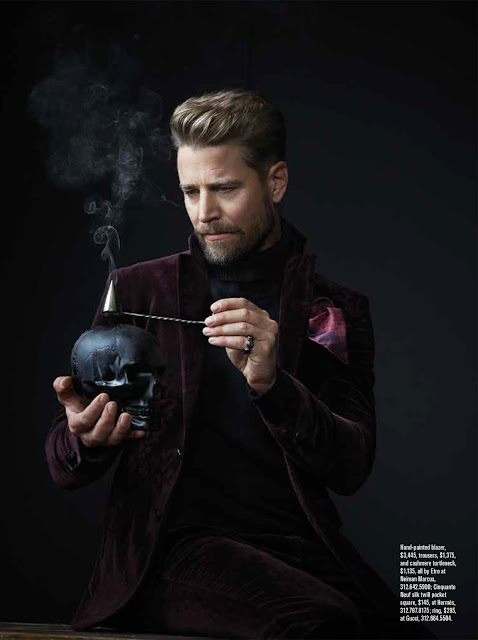 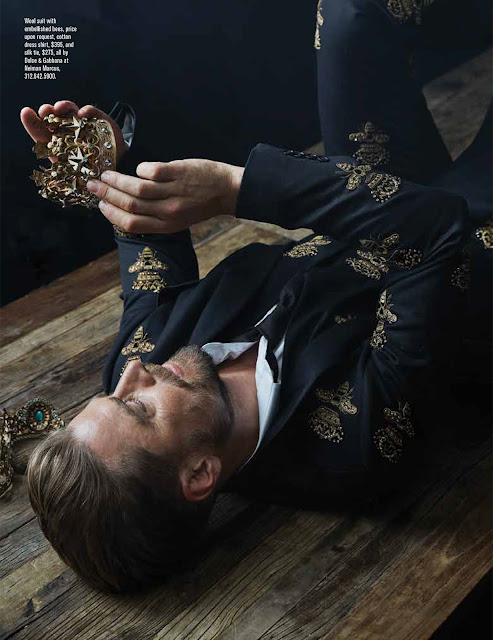 I have to say that I do love the messing about that is happening with men's suiting.  Colors, textures and embellishments are appearing that have not been trotted out since the 1700s.  These two designs are fairly subtle expressions of this change, and as such are far more accessible to the average Joe's brain.  The first is a burgundy velveteen suit that has been finely hand painted in the same color on the jacket body.  It is only dimly seen in this image, but the effect is a fine one, and as an Attire word, it begins a potentially complex visual statement.  The second is a navy wool suit embroidered with bees in gold thread work. Though most guys wouldn't consider wearing both pieces together, either one, paired with other things would be able to add considerably to the conversation.  I want to see more, and I suspect I will. 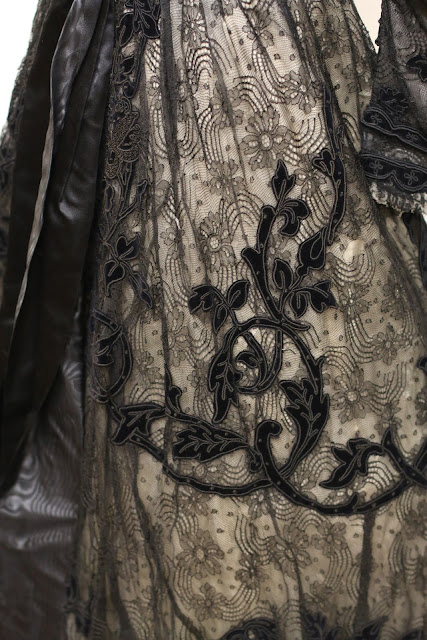 I am often gobsmacked by the level of workmanship, and the attention to detail that was put forth onto clothing of the Victorian and earlier eras.  This detail image shows exactly what I mean.  The very fine machine made Chantilly lace has been appliqued with scrolling vines in velveteen, that are then further decorated with outline stitch work and french knots.  It connects this image to the first in the line up today, as an image of how we viewed our women, and what was expected of them.  This is not just a piece of exquisite hand work, it's a statement of wealth and position in physical form. 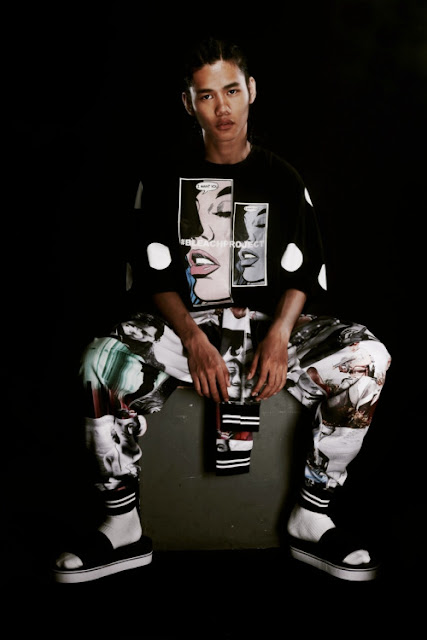 A source of continuing fascination for me is how rapidly our globablizing culture is changing how we appear to each other, and the Attire words we choose to employ.  This ensemble is a veritable billboard of cultural influences all mashed together.  In one sense its a clanging, cacophonous mess, in another its a harbinger of what is likely to come.  We are drawing inspiration from the endless stream of sensory input we are barraged with, and the results, like here, are often overloaded with cues and images in an attempt to voice that tremendous influx of sensation.  Perhaps we will rise to it and grow along with this change, eventually finding such Attire as this blandly dull.  Perhaps as we settle into a truly global world, this need to try and express all of it at once will fade.  I will be watching closely to see how it plays out. 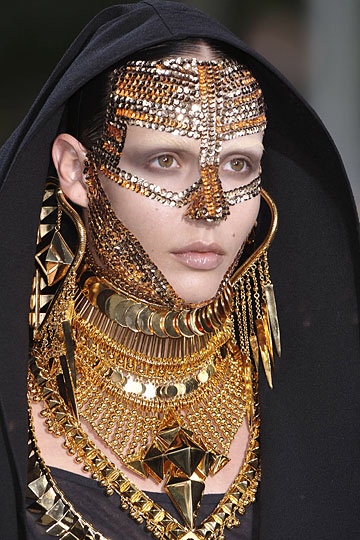 Sometimes runways styling, though it's not meant to reach out onto the streets is profoundly beautiful in it's own right.  I am aware that this particular style references the subjugation of women as property.  I can still look past that and see the glamorous beauty that goes along with that.  It is quite like being able to look at a cathedral and let go of the human toil and misery that was involved in creating it. The model here has been turned into some sort of fabulous icon, we can no longer perceive her personhood entirely, but in service to the creation of an image of beauty for a moment of time, that is okay.  Sometimes the creation of the special requires us to give up something in return. 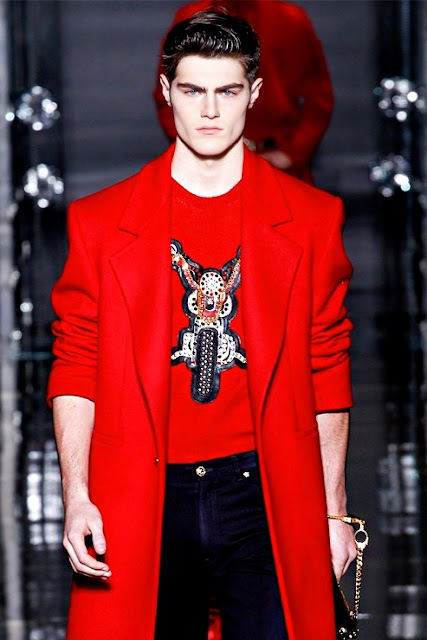 Red.  Color of blood, passions of the heart and body.  The heart rate amps up, salivation begins, and our pupils dilate a bit.  And when we see a mass of red like this, the effect on us is great.  I have trousers in many bright colors that I wear often.  Which pair unfailingly gets the strongest positive response?  The red ones.  We are drawn to red.  So strong is that draw that food packaging is very often dominantly red, because we actually salivate more looking at red.  This is a nicely cut coat, but in red it becomes completely overwhelming.  The psychological power of brilliant color is enhanced by the graphable physiological responses that accompany it. 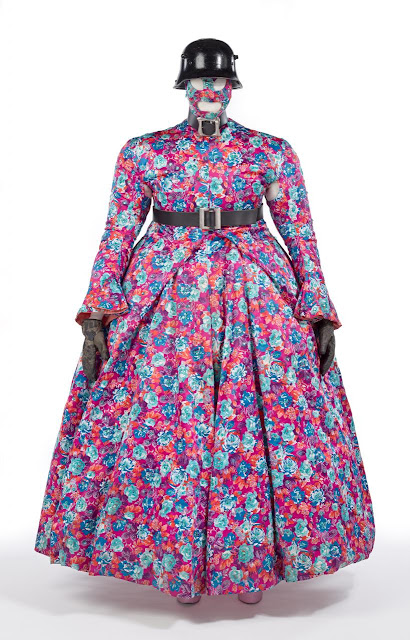 The 1980s was a fertile time for the Avant Garde in apparel design.  This image, is of a costume design done by actor, performance artist Leigh Bowery, from Australia.  He was as much of a designer as he was the many other things he did in his short, but brilliant life.  This juxtaposition of a fussy floral print, the leather accoutrements, and the mask hood creates a visual story that is deeply unsettling, which is of course, the point of the exercise.  In especial, the interaction between the floral hood mask, and the nazi-like helment calls to mind concentration camps, gas masks, and unique tortures.  Amazing that even without the actor in the costume, it still has raw energy, and an ability to disturb. 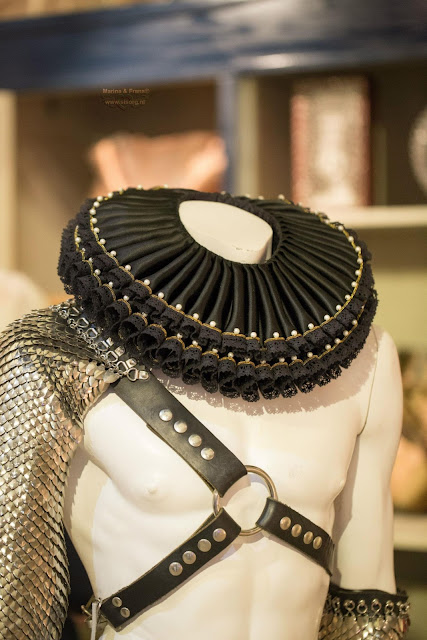 And speaking of things to disturb, there's this combination of apparel choices.  Fetishy looking straps, fish scaled armor pieces, and an elaborate, and beautifully constructed cartwheel ruff collar.  What appeals to me here is the dissonance created between the implied activity of the harness and armor, and the affluent indolence of the ruff.  The first two elements are associated with action, in many cases extremely physical activity.  The ruff however is associated with upper class people who do not engage in warcraft, or are not overt about their sexual predilections.  When I see combinations of garments like this, mash ups of this sort, my mind starts spinning out tales that will make the choices fit together with their own logic, rather than be a disparate assemblage.  In this case my mind began creating a sexually charged scenario that would engage all these elements equally.  What story could you tell with this? 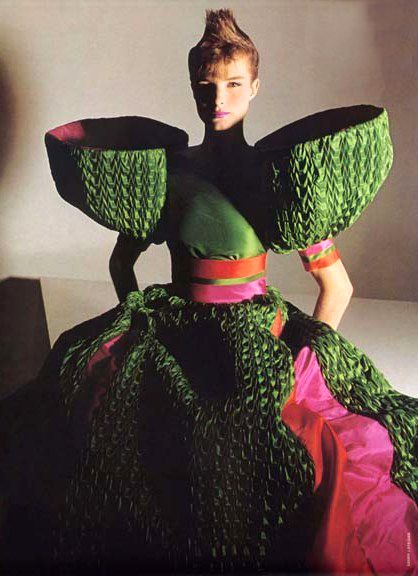 This image is from Vogue Italia in the 1980s.  Again, the Avant Garde flourished in the 80s, and this is another example, though certainly not as deeply disruptive to a person's composure.  I cannot decide whether she looks more like a fantastical plant, or whether the design resembles a complex garden pot, meant to hold multiple plants.  In either case, the connection to plant life, with the colors and textures that were chosen is powerful. 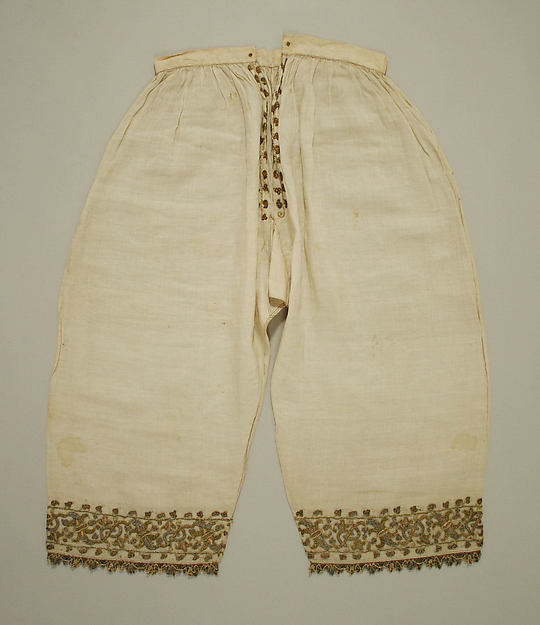 Here we have a real rarity.  Underwear from the 1500s.  This set of man's cotton under-drawers is from Italy and is embroidered in gold thread, with a narrow edging of gold lace at the leg openings. The front fly opening has been embroidered as well, though not as extensively. You can see at the center top the eyelets that were meant to take a drawstring to hold the drawers shut.  Almost no actual underwear from that century survives, since it was typically worn till it fell apart.  These have to have belonged to a very wealthy, probably titled person.  They might have been meant as part of a wedding ensemble, and so got less wearing, but the original owner, and use, is not known. 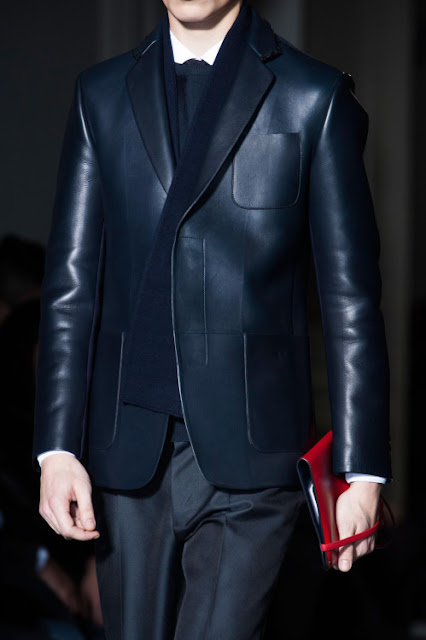 A rubber blazer.  Why not?  I can say I love the texture, sheen and smoothness of this.  It gives it an edge that is very appealing.  Would it be a pleasure to wear?  Oh, probably not.  So I will present this as a slightly failed experiment.  Visually, it's an A+, functionally, it won't grade so highly.  Valentino- Fall/Winter 2013. 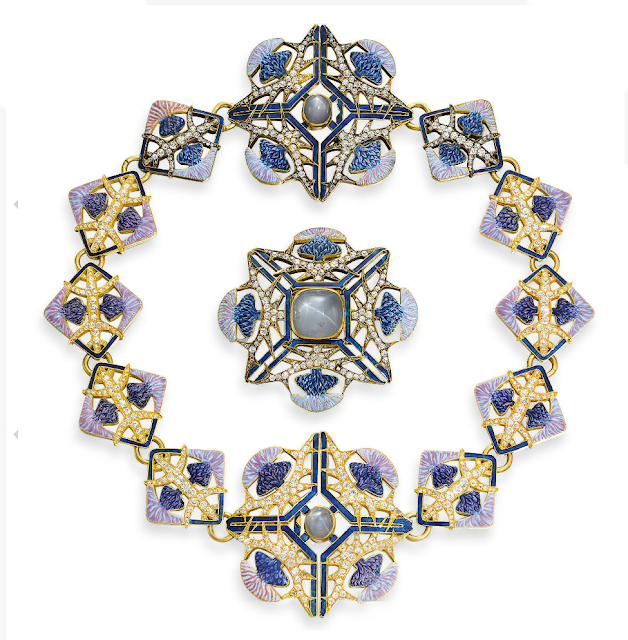 For the last entry this week, something delicious from the work bench of Rene' Lalique.  Called the Thistles parure, it is comprised of a necklace that can be broken into two bracelets if so desired, a brooch, and a bracelet.  The work is done in gold, with diamonds, cabochon white sapphires, and extensive enamel work, which was a hallmark of Lalique's work in jewelry.  The set was created in 1900, when Lalique was deeply involved in the Art Nouveau movement.  Stunning stuff, this.