The middle part of the 1800's saw some of the biggest clothing for women in human history.  Technology allowed the skirts of women's dresses to expand, and expand, and expand again, until their mobility indoors was restricted to such a degree, that moving about was dangerous, not just to them, but to furniture, and art objects.  But what was it that fueled this desire to get bigger, rounder, and wider all the time? 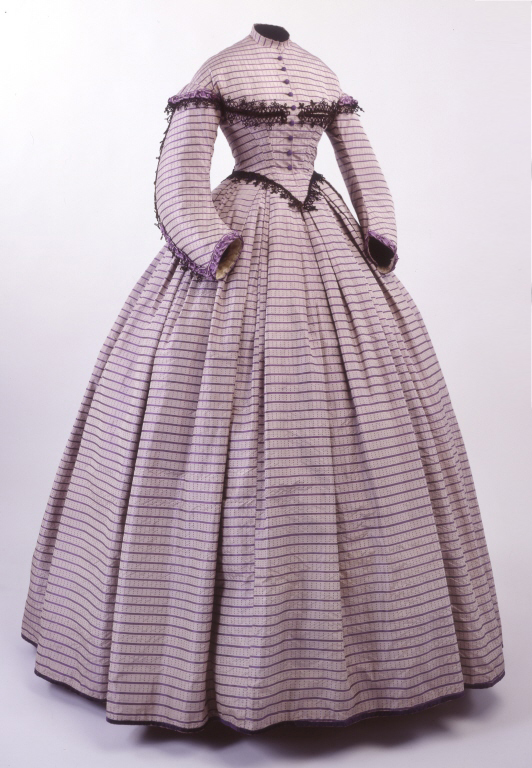 The first and most obvious answer is simply, because we could, which honestly is the real reason for a good deal of human endeavor.  We just gotta see how far we can take something.  So, we take it to it's greatest extremity, then we give up on it entirely.  We took the invention of the cage crinoline, and experimented with different ways of making them till we found an idea that was able to support, literally, the idea we had of vast swirling skirts. 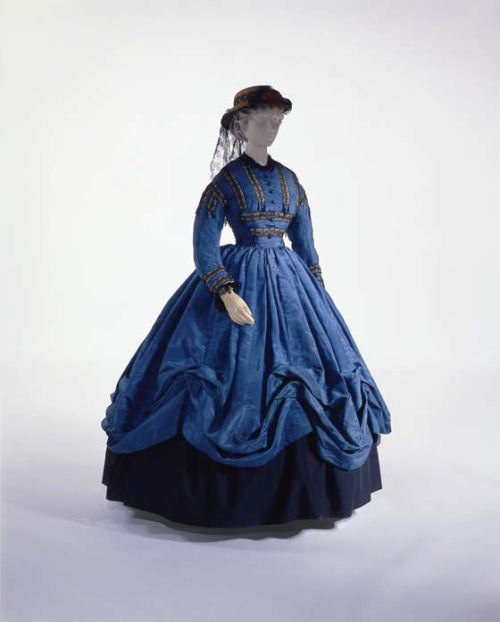 The second reason I see was class distinction.  Women of means were able to have enormous skirts, because they had the leisure, the money, and support in the person of servants to make and keep up their apparel.  Along with this class distinction was the visible display of excess. Sure, some of these pictured clothes are fairly restrained for the time, but simply the ridiculous amount of fabric required to make a dress, spoke about rank, and money; especially money.  And when that same lady could afford to bedeck that amazing expanse with lace, ribbon, silk flowers or other trimmings, all the better for her. 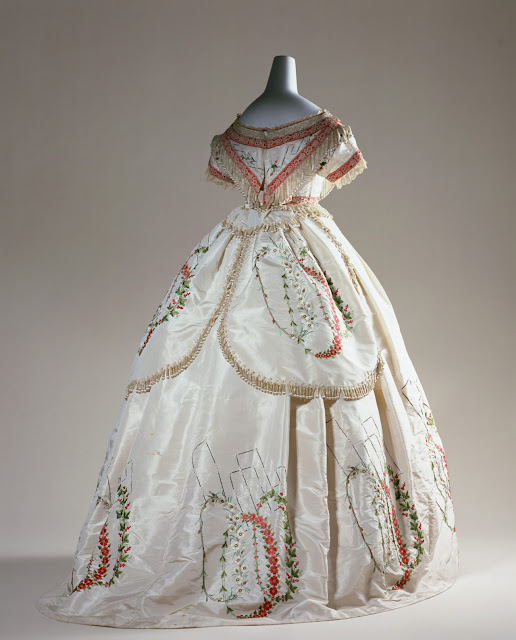 With the invention earlier in the 1800s of the sewing machine,  it was possible for women to make up these huge dresses much more quickly, so in order to maintain the semblance of class order, the wealthy made sure that the additional trimmings were luxurious, and plentiful.  Massive amounts of lace, ribbon, and appliques assured that rank stayed rank. 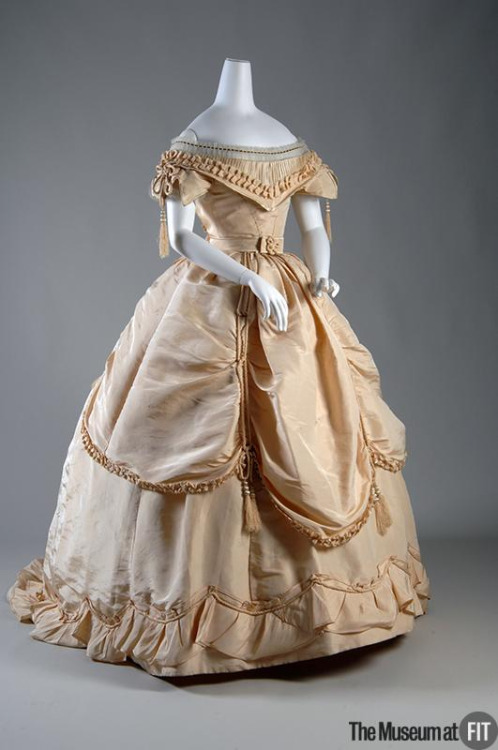 The third reason is a deeper, and somewhat darker one; certainly not one that most people would have consciously considered.  Putting a woman into a garment that made the lower half of her huge, but diminished her upper body, making her head look tiny, was a not very subtle slap.  Women were not meant to think, or to express their opinions.  They were meant to produce children, and be decorative.  That it was women themselves who were devising and wearing this clothing is revelatory about how women felt about themselves.  They were still to a very great degree buying into the entire patriarchal set up.  So they willingly supported men's ideas of them, by creating this vision of compliant rectitude. 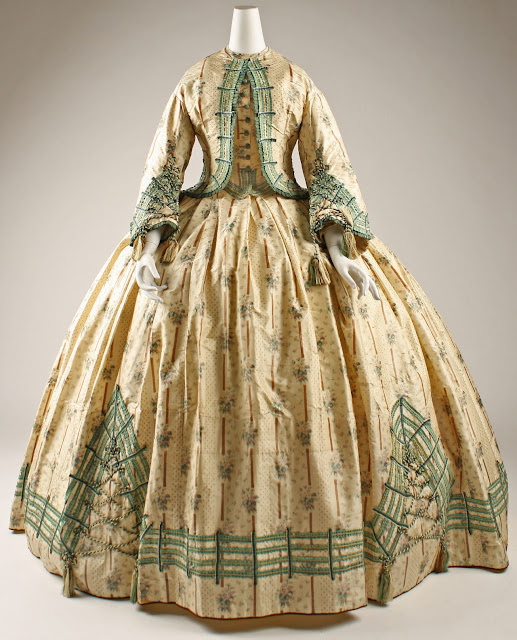 A woman dressed in this way was incapable of much in the way of physical activity, and since the creation and maintenance of these clothes took so much thought and time, it was another insidious way to keep women suppressed.  You only need to do a modicum of research to discover that there were endless numbers of books, and periodicals explaining correct dress, and behavior to women. So in addition to the actual process of dressing, they spent time reading up on what was correct, and fashionable, to a degree far greater than we do now. 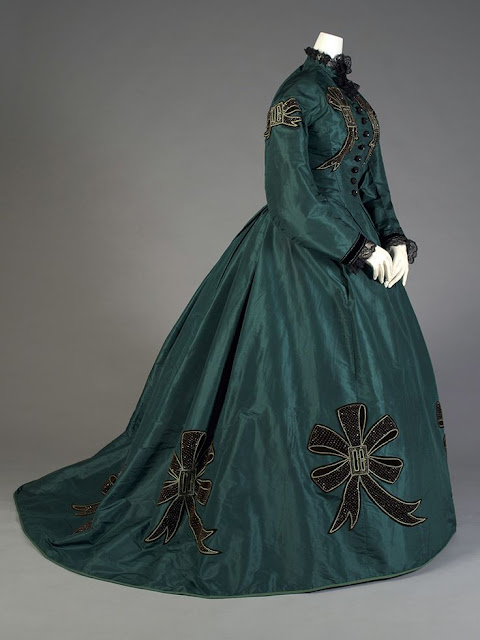 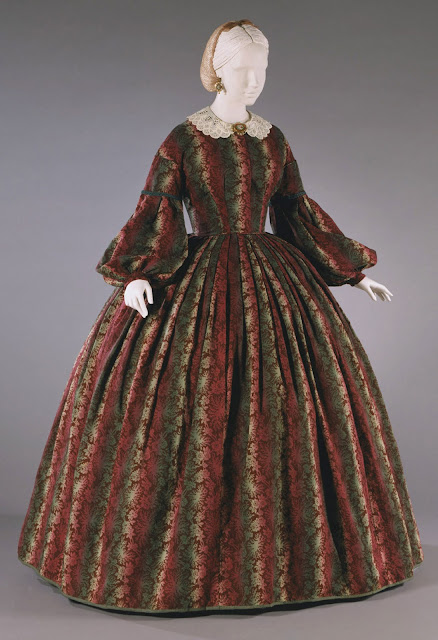 Of course, seen through the lens of the past, we can look at these clothes and find them beautiful, and deeply romantic. It is important to remember when we look at them, that there was a reality that went with them that we cannot ultimately know completely.
Posted by Paul G. Ellis at 8:16 AM