I found an amazing work by Callot Soeurs a few days back and posted to the facebook version of Attire's mind. It got me thinking again about this extraordinarily talented design team of two sisters, so I went looking for more and came across this. 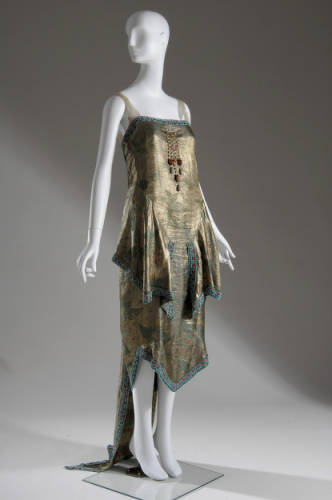 1921 was an interesting year, it was smack in the midst of some significant changes both socially and within Attire that would change how women dressed profoundly.  This work by the Callot sisters is a great look at that transitional time.
The essential silhouette retains the hip defining look of the teens, when a great deal of women's clothing was draped to accentuate the hipline through the hobble skirt, and the peplumed jackets that were quite popular.  The other hold over is the train which would disappear from women's evening fashion outside of the most extremely formal of events.
What establishes this garment as a transitional piece are two things, mainly.  The first is the drop of the neckline.  It is a touch lower than would have been acceptable just a few years earlier, plus evening wear most often still had at least vestigial sleeves.  The other, of course, is the ascending hemline.  It hasn't yet reached the level it will achieve in 4 more years, but it's well on its way. 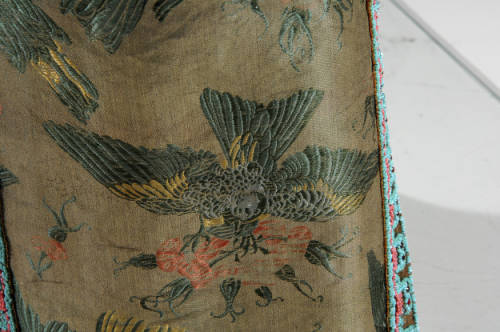 The textile is a silver metallic brocade, printed with birds in a Chinese inspired manner.  (It does appear pale gold in the images, but this is due to tarnishing of the silver over time).  Though the cut of the dress is approaching the modernity of the chemise that would dominate the decade, the fabric choice keeps a certain stiffness due to the metal threads in its weave, giving the finished piece a certain gravitas it would not have otherwise. 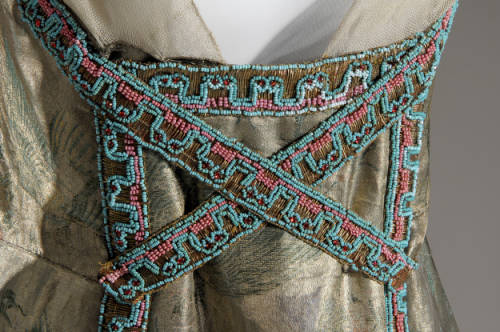 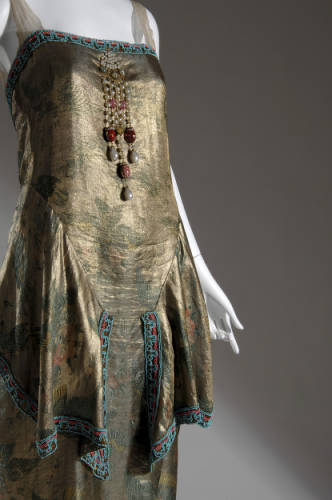 The decorative work is mostly a series of beaded straps done in coral pink and light blue beads, and the center front of the bodice has a large embroidered motif with pendant coral beads on stands of pearls. One of the other design concepts that had overrun the teens was that of asymmetry.  That idea is entirely absent here, with the finished piece relying on perfect side to side balance for a good deal of its impact.
So, this dress steps across two different eras.  It nods to the greater formality that was still in place in the 1910s, while reaching with grasping little fingers for the bright future that was the 1920s.  For me, a lot of the most interesting items I find are the ones that bridge two stylistic, or social time periods.  They express our constant yearning for change in a way that clothing from the midst of an era cannot. 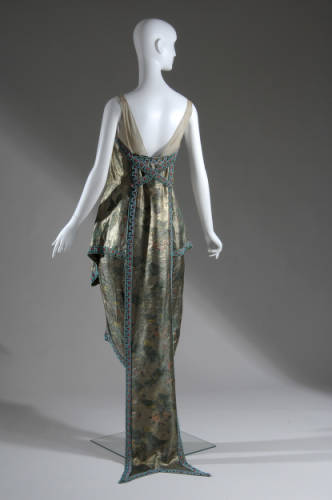 With gratitude to the Chicago History Museum.  This dress was worn by one of Chicago's most famous citizens. Mrs Palmer Potter II.
Posted by Paul G. Ellis at 6:17 AM