Welcome to Scatter number one hundred and two.  We will be bouncing all over the place, as is our usual method, so strap in and enjoy the ride! 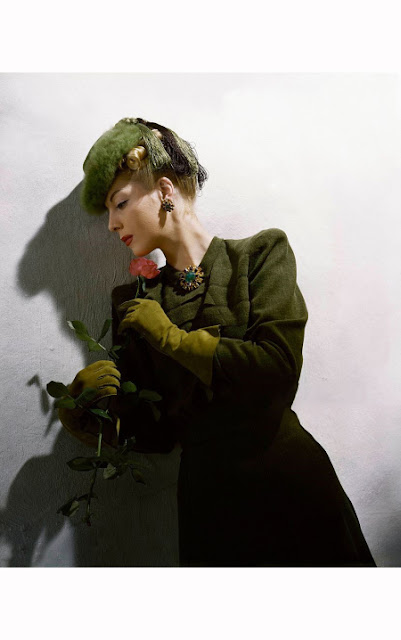 This is model Helen Bennett, photographed for Vogue magazine in 1939.  What came up for me here were two things really.  First is that the image of fully grown up beauty that was the ideal at the time will within just a few years begin to fade out.  It will be replaced by an ever more youthful, often girlish image, that becomes more frankly sexual as well.  This ladylike vision of stylish rectitude will come to be seen as stodgy.  The other thing that comes to mind for me is how much the idea of what is needed to look put together has shifted.  The days of hats and gloves being essential parts of the daily wardrobe have gone, perhaps for good.  Still, I admire this look, and every time I see one of my customers who assays a sleek retro look like this it makes me smile inside and out. 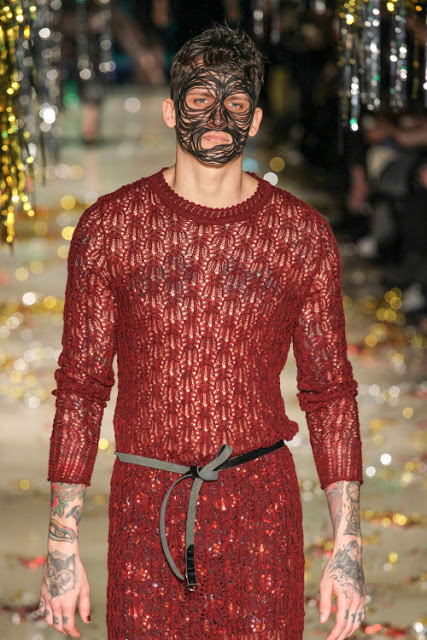 Get ready, I'm going to be throwing two different man dresses at you today.  This one is from Vivienne Westwood.  I must admit that I find the runway styling, with whatever that is on the model's face, so distracting that it's hard to focus on the garment.  That said, I find it interesting that more designers have moved on from showing men's skirt looks, to men in what we have to call dresses.  I suspect that, in order to promote them effectively, they might need a new verbal term.  Clearly though, the notion of skirts and dresses on men is beginning to gain ground if so many designers are producing them for the runway. The idea of this, a sheer knitted dress, with an underskirt doesn't bother me at all, though it's not something that would suit all body shapes well.  You go, Vivienne! 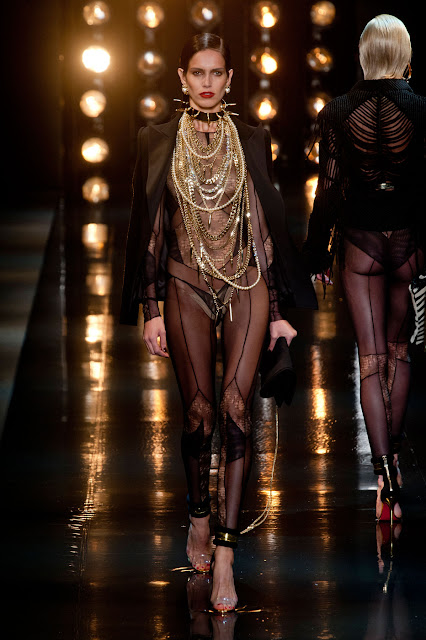 Speaking of distracting runway styling, here's something from Alexandre Vauthier.  I have to admire the level of craft required for the making of this catsuit.  Other than that I cannot quite imagine what venue, outside of the bedroom, where this look would play well.  Perhaps I'm giving voice to my inner prude. I do understand that some of the work that walks the runway is never really meant to be worn in the real world.  This, I suspect is one of those things.  Tell me, please, if you can think of a way to incorporate this into real life apparel. 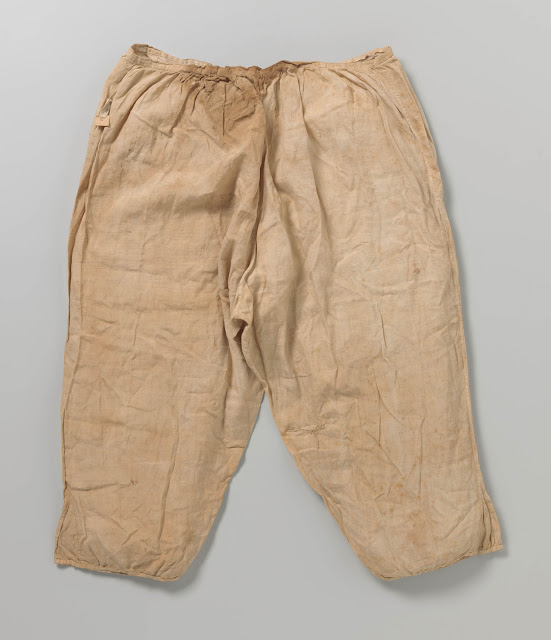 Since the prior image was essentially lingerie, it's only right that the next should be under-gear as well.  It is very rare indeed for underclothes to survive over time.  In fact, only one other pair of royal underwear exists in a museum.  This pair of white linen underpants is from about 1640, so they are soon to be 400 years old.  They were worn by Hendrik Kasimir I.  Their fabrication is unusual, since the majority of underclothes were made of wool, for warmth.  The lighter material may have been for summer use, or simply because it could be afforded, and was less scratchy.  Many of Hendrik Krasimir's clothes are on display at the Rijksmuseum in Amsterdam, where this article is also on view. 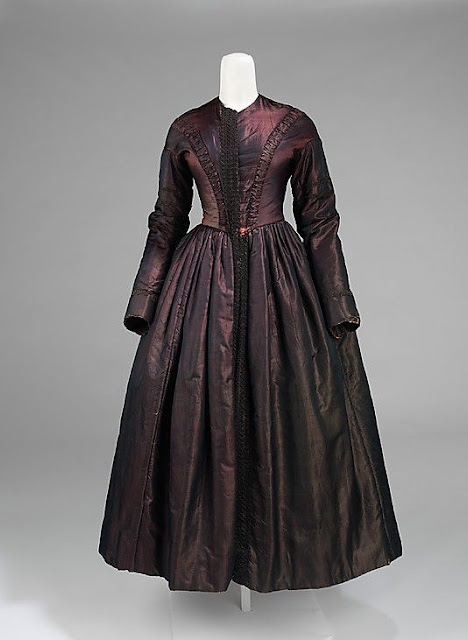 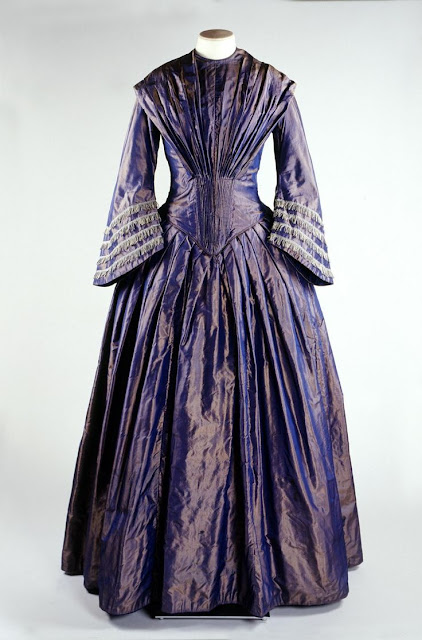 Textiles, like silhouettes, have their times of popularity, and their times of eclipse.  Change taffeta is one material that held great prominence for a good deal of the 1800s.  Always made of silk, until the development of rayon in the 1920s, change taffeta gains its shifting hues from the fact that the weft and the warp are two different colors of thread.  Add to that that silk fibers, taken in cross section, are translucent prisms and you get that incredible shimmer that defines change taffeta.  It fell out of really common usage in the later 1800s, and though it has always been around since, it has been sidelined, for now. Who knows but we might see it gain ground again one day. 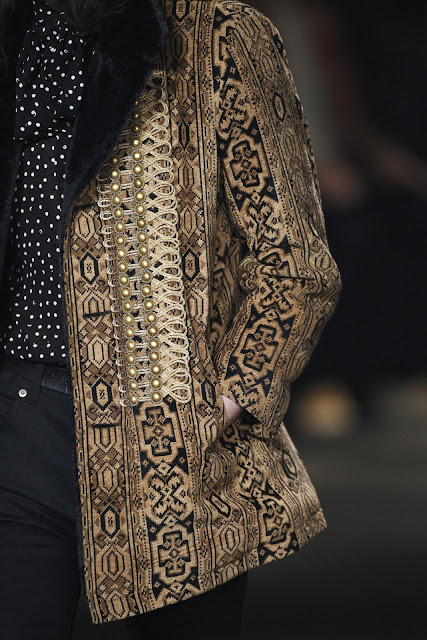 I have hidden something form you all.  It's a terrible dark secret.  But now I must stand tall and admit it.  I love brandenburgs.  There, it's out in the open at last.  I feel so much better.  This coat detail shot is of a Saint Laurent menswear piece from the most recent show. Perhaps its the rhythm of them moving down a coat front. Perhaps it's their extravagant look.  It might even be the recollection they create of military uniforms.  Whatever the reason, I do appreciate them.  Naturally, this is not the sort of coat closure that is likely to appear in ready to wear.  They are far too time consuming to apply. And perhaps that is another reason why I like them, their rarity. 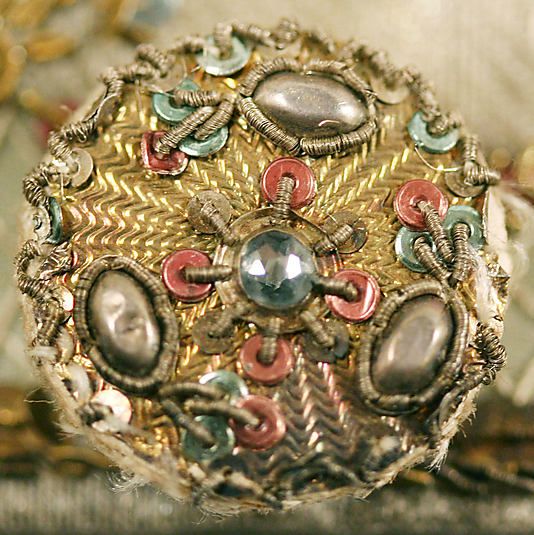 These days, outside of couture clothing, you would never come across buttons like this.  This man's suit button is from 1765.  Start with a gold plated disc that is pierced.  Mount said plate on a padded fabric backing. Then take paste stones, gold dusted metal sequins, and gold metal purl, and embellish the living daylights out of it.  It was common practice for coat buttons to be hand decorated in this manner.  And a gift of a set of buttons like this was considered a present of some significance.  Then as now, really good buttons are pricey.  It is fortunate that coats were rarely buttoned, because these are fragile things that can't take much wear. 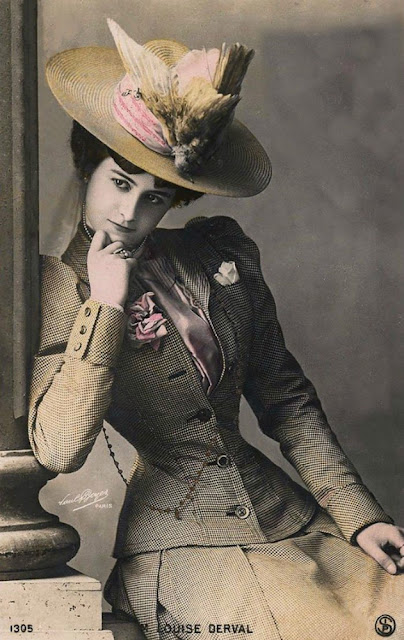 Mme Marie Louise Derval was an actress at the beginning of the century who worked on stage and in film in France.  I'm giving you a glimpse of her to show this great suit off.  As women moved more into the workforce, and also came to be allowed greater freedom in recreation, suits of tweed came to be a popular go to.  They were hard wearing, practical garments that could be worn for work, travel or tramping the moors.  They were considered quite as suitable in town as in the country. And they had another enormous advantage for women. They were quite easy to care for.  No layers of ruffles to be pressed. No lace insertions to fuss over. No layers of beadwork to repair.  Once the woman's tweed suit came into being it has never truly left us.  We don't see them much in the USA, but just go to the UK, and you'll see they still are out their doing their sensible bit. 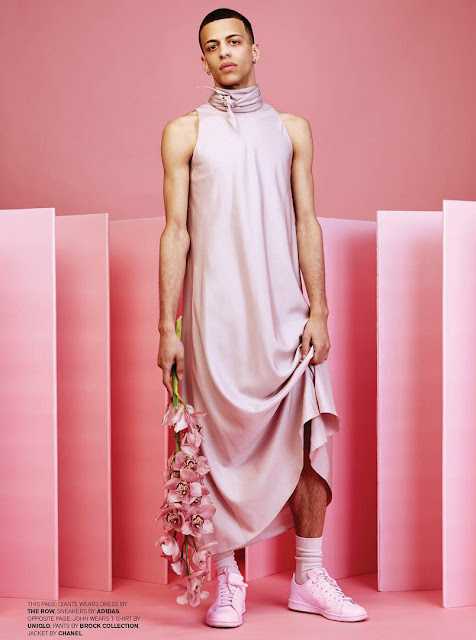 I promised you two man dresses. Bet you thought I'd forgotten.  The dress is by The Row, and the sneakers are Adidas.  The choice of this blush pink is deliberately meant to push buttons. And it does.  Combine the subtext of pink being associated with the feminine, and the soft drape of the dress and this can't be anything other than a challenge to our sensibilities.  The thing is, render this in some other color, and the message would change a good deal. The basic shape is a worthy one.  It could be made to work for a lot of different body types.  I approve of this one heartily, and I hope to see more man dresses appear.  It's long past time. 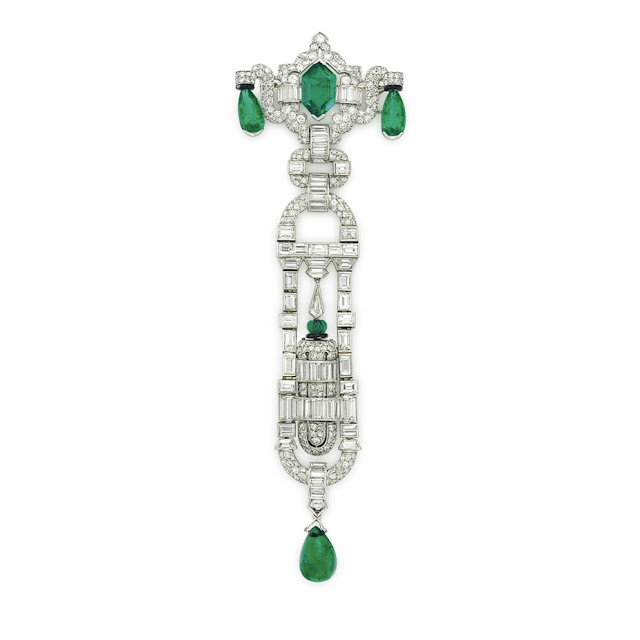 It's time for some shiny.  This delicious piece of expensive is a pendant lapel watch. It was made in 1925 in France. It's about as straight up a piece of Art Deco styling as I've ever seen.  Made up in platinum and white gold it is set with cabochon and faceted emeralds, kite and old cut diamonds, with the watch concealed on the rear face. I strongly suspect that the lucky lady who owned this little goodie had little concern about things like time. (quietly drools) 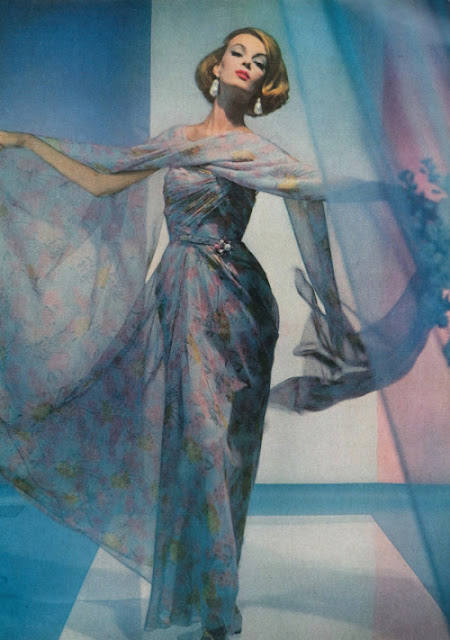 This is European model Nena von Schlebrugge.  The first item today talked about how the whole ladylike thing faded away.  This is another image of that shift. Taken in 1959, this image is near the end of the polished lady run.  Within just a few years this kind of worldly sophistication will be supplanted by romping, leggy gamines, and stiffly posed space age chicks.  Also, this manner of evening dress is about to vanish from view apart from older women and more conservative sorts. It will be replaced by plastic and metal, paper and vinyl in profusion, all done up in stark contrasts and bold patterns. Sorry Nena, but the clock is ticking. 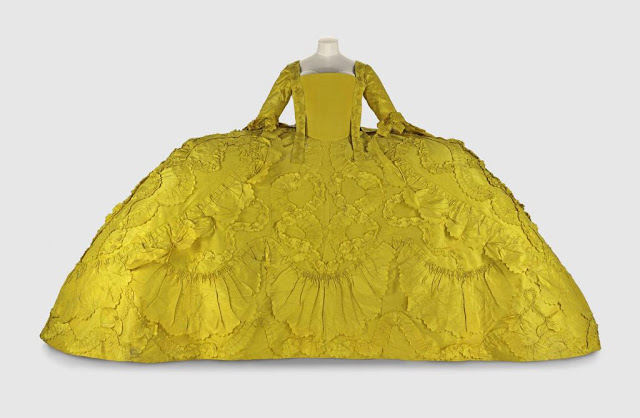 The final item this week is one of the most outrageous mantuas I've even seen.  I will apologize for the obviously photoshop fiddled color here, but I haven't found a better image of this.  I have seen this dress for reals, and the tone is not much different.  This huge edifice of an object was worn by Helen Robinson of Ladykirk in 1760, to a royal ball. This intense yellow, and others like it were immensely popular for a long time in the 1700s, finally dropping from popularity around 1790.  That the entire garment is made up in this one material is amazing. She must have been eye searing in a room full of other ladies.  The plain stomacher is a museum inset, since the true one is missing.  It's also interesting as a sampler of the ways self decoration was employed.  There are pleats, gathers, ruchings, and puffs, (sadly flattened) on the skirt, all done in the same textile as the mantua.  Also, the full width of the skirt is roughly 2 feet wider than Helen of Ladykirk was tall.  Just try to imagine a few dozen women, similarly dressed, trying to maneuver in one room, let alone dance.

Well, that's the lot for this week, I hope you had fun.  Now, go enjoy the rest of your weekend!
Posted by Paul G. Ellis at 3:45 AM