Good grief it's only a month before Summer begins!   How is this possible?  Can it be that I've had my head buried in the Attire world that nearly half a year has gone?  No, just feeling that time moves faster thing that hits us as we get to a certain point.
Okay, that utterly pointless ramble is out of the way. On to Scattertime! 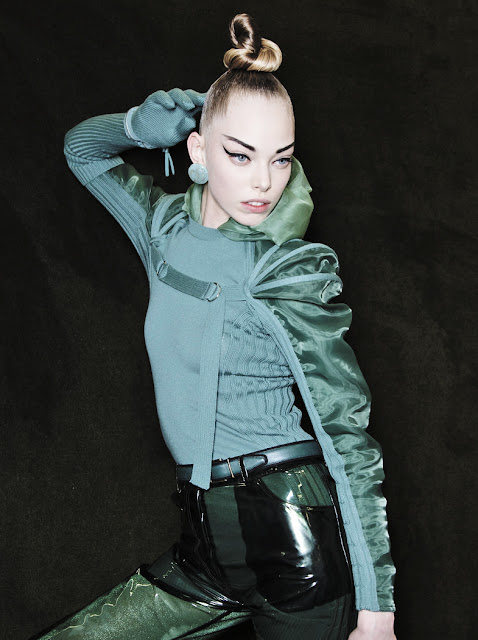 So, here we have this wildly space age chick.  The styling here is intense, but I admire the polish brought to it.  There is a sense of unity with the color choices that keeps this already complex melange of items from being completely incomprehensible.  The piece that intrigues me most is the odd sleeve harness thing. It's difficult to tell from this image whether it is integral to the rest of the top, or if it is a separate accessory item.  In any case, it's an interesting combination of lines and textures.  And, vinyl shorts over pants?  No, just no. 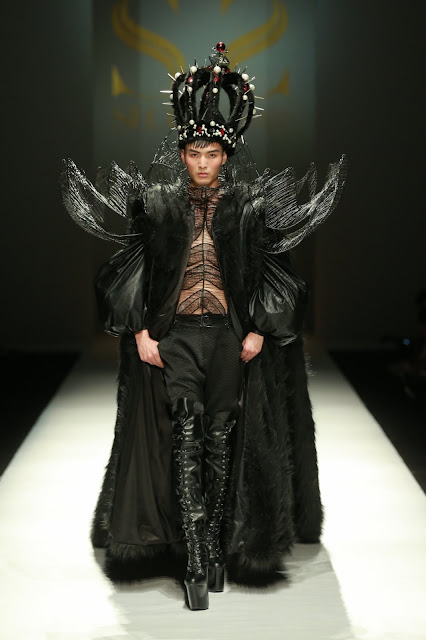 I am the King of the Runway, says he.  Bow low before me, mortals.  This is not fashion. This is theater on steroids.  Some designers find it valuable to present a few things in their collection that have no utility beyond shock and awe.  As crazy as this ensemble is, it is a masterful piece of craftsmanship and contains ideas buried within it that could be applied in real terms, if they were scaled back and separated from all the rest that is going on.  The ballooning sleeves of the coat could be applied in the real world with the right proportion.  And even the spiky feathers, which I suspect are burnt ostrich, could, if used sparingly, and in smaller scale, be a workable decorative element. 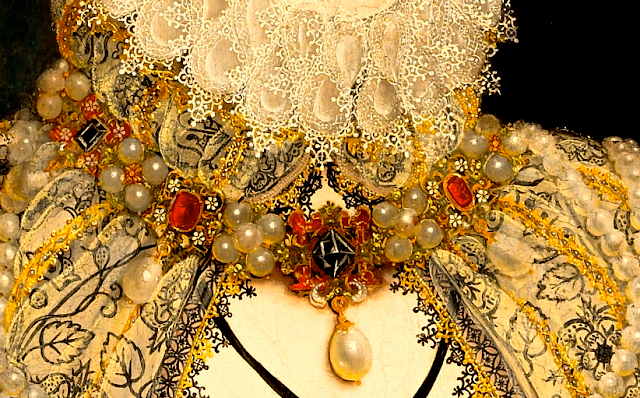 It's a wonderful thing that we have such detailed records of apparel in the 1500s, since nearly nothing exists in reality to show us what was what.  This is a detail from a Nicholas Hilliard portrait of Queen Elizabeth I.  Looking at the painting in its entirety you see a mass of splendor, but because so much is going on, the multitude of details fade into the back.  Hilliard was meticulous in his rendering of the tiniest things, so we see that, along with the immense jewelry there is English blackwork embroidery, gold lace, hand painted floral patterned textile, and pearls in profusion.  What comes to mind for me is that each of these details had to be done entirely by hand, from the fragile lace of her ruff collar to the making of the gold lace to the painting of the fabric, all had to be done by patient hands.  A garment of this quality and elaboration would have taken dozens of people to create, and months of time. 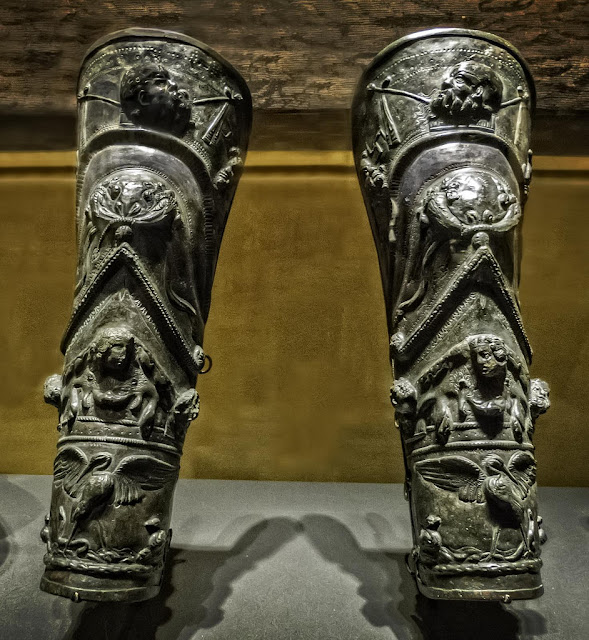 Next in the line up, an example of the glory of battle, or rather how we attempted to glorify it, while trying to keep from getting killed.  This is a pair of shin guards, from around 100 BCE.  Made of iron they must weigh a good deal, but it's the level of decoration that fascinates.  These are far more than items of utility. It seems that even in the midst of conflict our need to gussy up and present the best possible version of us is in action.  Of course, a pair of shin guards like these were not worn by the common soldiers, but by officers. Still, those officers had to get in there and mix it up, so these very likely saw war up close and exceedingly personal. 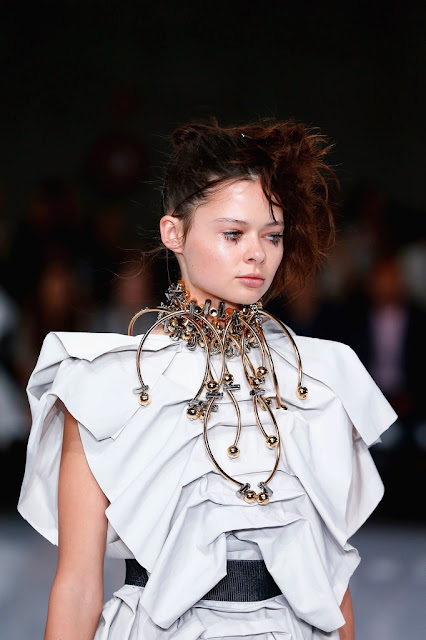 Experiments are important, vital, actually to the continued evolution of the Attire language. This effort from Maticevski Resort is working with an old idea, pleating, but blowing it up huge, and only pleating part of the breadth of the garment so that the material falls in loose folds.  I'm not sure that this is entirely successful.  But to be honest I find the vast necklace so distracting it's hard to edit it out in my mind. The reason I'm not sure it succeeds is that the result looks a bit too random.  But not the intentional randomness that is an essential design ploy.  It's clear that it is meant to appear as though it had simply occurred that way.  I don't think that it does. 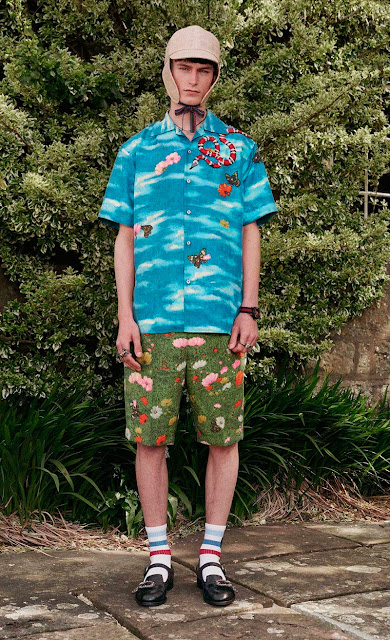 Here's another confusing combination.  This is from the most recent Gucci Cruise collection.  The shorts don't particularly bother me, aside from the somewhat unfortunate pattern placement that puts two flowers right over the model's crotch. Cut the textile a trifle differently and I have no issues.  The shirt, too, is something that I mostly get.  What bugs is the airborne snake, which if you look at the whole collection, is a thematic element.  It does not look like it belongs there.  And of course the over-sized deerstalker cap, which naturally everyone going on a cruise is going to want.  Just color me perplexed as to why a design house would choose deliberately to make their models look a little batty. 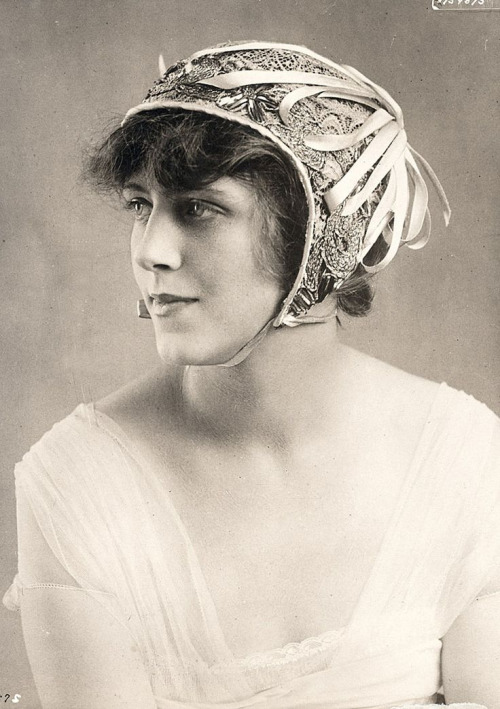 The boudoir cap is another little something that is no longer an Attire word we use. For centuries it served two main utilities. One was simple warmth in unheated homes. The other was keeping the hairdress of the prior day fairly well intact. And the third was to keep the long hair out of the way during sleep.  Apart from the warmth issue the other two could still be worthy reasons for using something like this, but once a word has really gone from the lexicon, it rarely makes a full return.  This boudoir cap is from about 1914.  And it obviously is brand new since milady would have crushed those ribbons during sleep otherwise. 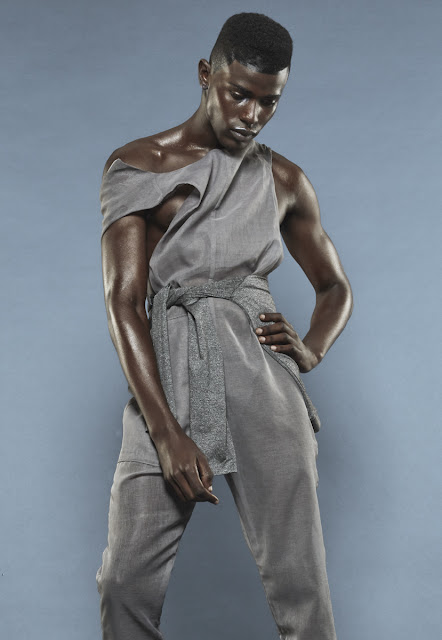 In men's fashion illustration these days the level of remove from reality is growing to be just as high as it is for women's  The amount of image adjustment here is impressive, and well done.  What we get is an image of a perfected human, with pore-less skin that gleams.  This is also a good example of how differently men are being imagined for editorial shoots than they have been in the past.  We are allowed to see a softer sexuality, and a pensiveness that was absent from earlier menswear imagery.  Nao Serati Fall/Winter 2016. 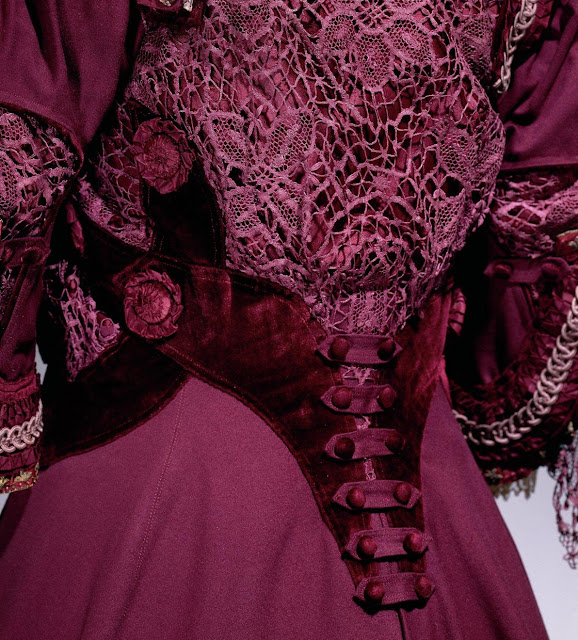 This detail image of a woman's jacket from 1905 is dizzying in it's complexity. Sadly, I've been unable so far to unearth an image of the whole garment.  What intrigues me here is that, in 1905 this level of elaboration was normal for expensive clothing, but within a decade this amount of decorative detail will be gone, and it won't return completely.  On top of the complexity of the cut, which is quite high, there are so many things going on that it is hard to know where to look first.  Wool broadcloth, cotton lace dyed to coordinate, tabs, ruchings, rosettes, brocade trim, passementerie and ribbon all in combination. And this isn't even the whole garment.  My heart goes out to the poor benighted soul who had to keep this thing clean and in good repair. 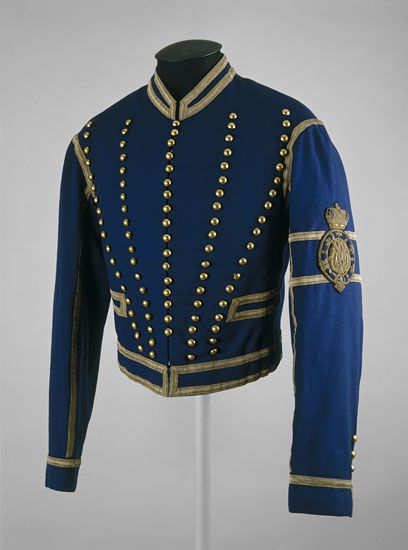 Since we are speaking of jackets, this is a Russian livery jacket for a coachman from the late 1800s.  Though the bullion embroidered seal on the sleeve may be the Russian royal seal, I can't be sure, since the image isn't clean enough.  I will defer to my faithful reader Stephen who has a passion for all things Russian to confirm this.   What I find interesting overall about livery is that it frequently aped military garb, and otherwise usually looked pretty much like fancy dress, as it often was deliberately out of step with the times. This had two advantages for the employer of someone wearing livery. It trumpeted to anyone seeing them that their bosses had oodles of cash to throw around.  And it kept the dividing line between servant and master sharply defined. 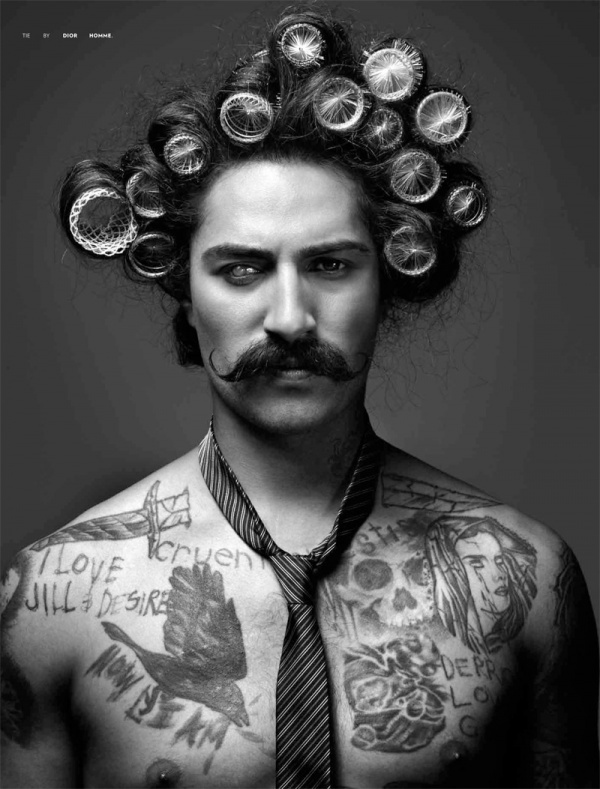 When I saw this image it made me think of the incredible clash of influences that assault us each hour of the day, due to our immensely increased access to information.  We have grown used to, in a remarkably short span of time, to wild juxtapositions of apparel decisions that in previous times would have instantly marked the person as insane.  Of course this image has been consciously created to point out these cultural dissonances. Yet we are constantly exposed to such disparate elements coming together.  It can be both exhilarating, and exhausting to try and make sense of it all, visually. Not wonder so many people live behind dark glasses with their headphones on. 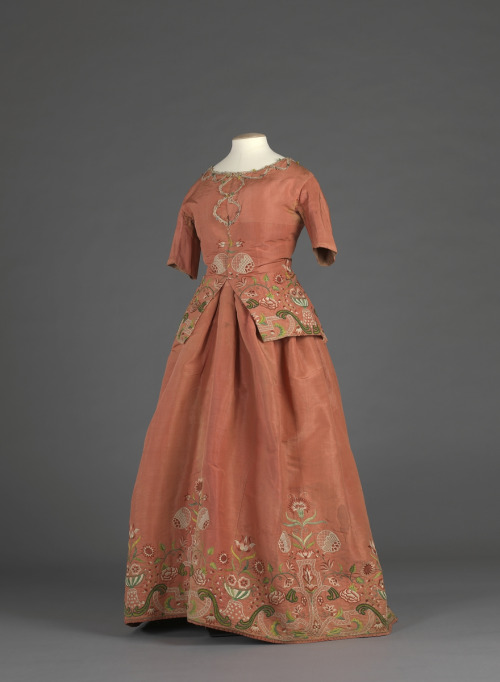 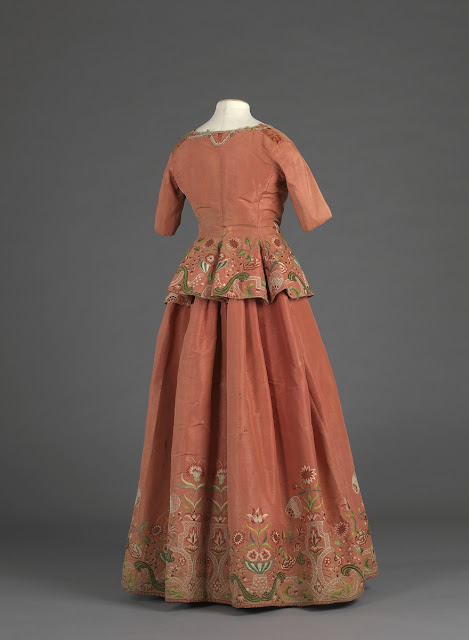 As a final entry this week, another of those kinds of clothing that live between strong design eras.  This embroidered Caracao jacket and matching skirt is from the interim period of 1730 to 50 when we were just about to watch skirts expand rapidly again.  It's also another example of how, between periods of extreme shape, there is a tipping point where for a moment the silhouette comes into complete balance and all elements harmonize.  And take a good long look at the final image, which shows the skirt laid flat so you can really enjoy the amazing embroidery work.  We are so lucky that this managed to survive in its original state.

Thanks again, for stopping by to share in my weekly serving of random wonders.  Have an amazing weekend!