Laying On The Gold

How we decorate the surface of textiles divides into a few categories, though you might not think so.  The kinds of embellishments done for festival attire and for tribal attire does not separate the person wearing it from their culture, but rather binds them to the society of which they are a part.  Gold work embroidery and its many variations, do something entirely different.  While they do connect the person to the culture, it is done at a remove.  The reason is the precision, the price, and the rarity of the process and its materials.  Anyone who can afford or command such work to be done is not a common citizen, they are a person of power. Therein lies the difference, and the allure. 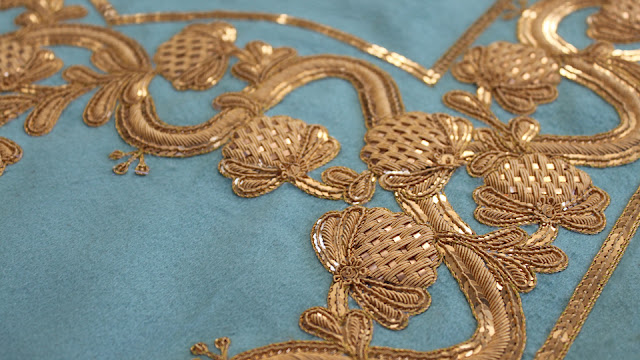 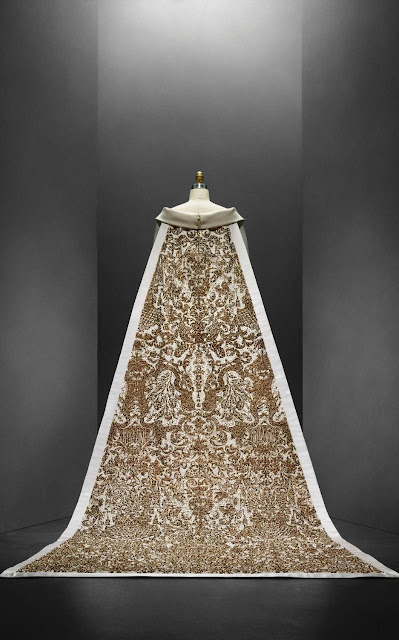 The precise source point for the type of embroidery known as gold work is unknown, though it is highly likely that it emerged from somewhere in the Asian sub-continent.  The likelihood is also high that it comes from one of the peoples who had access to, and understanding of the usage of silk, since gold thread is most often wrapped around a silk core.  But text references, imagery, and in some cases still extant pieces utilizing this special technique survive from cultures spanning all of Eurasia, and a good deal of Africa.  It was even known before the Common Era, and has been in near continual use for over 2000 years. 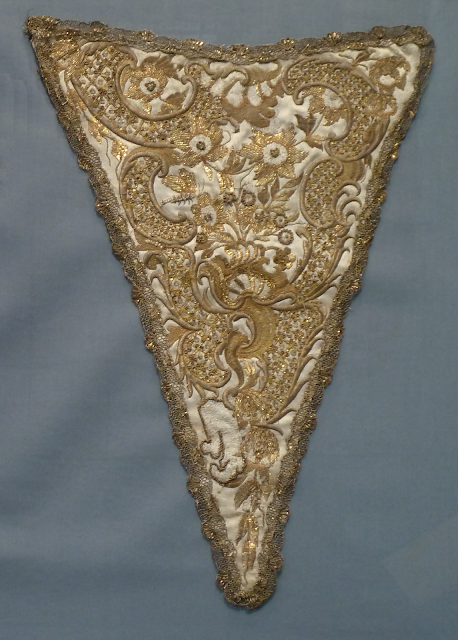 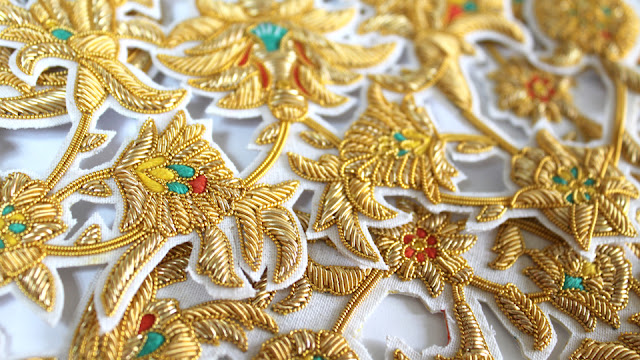 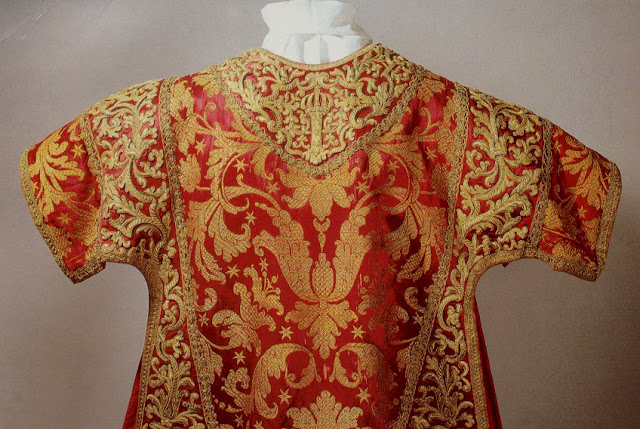 Certainly the largest part of current gold work comes from India and Pakistan, and it is likely that European knowledge of the process comes from early trade with those places, as well as Russia, and the Middle East, both cultures which also used gold work extensively.
What makes the whole thing possible is one physical characteristic of the element itself, malleability. Gold is unlike any other metal for its nearly endless ability to be folded, twisted, and manipulated without breaking.  Apart from it's singular warm color, this makes it perfect for application to the surface of a flexible textile.
The essential actions used to create gold work are not unknown in other embroidery. The only thing that is particular about it, is that the gold is never taken under the surface of the material it's applied to. In part this is because gold is so precious, and gives rise to one of the other ways of referring to it, laid work, since the gold is laid down on the surface, and held in place with stitches. 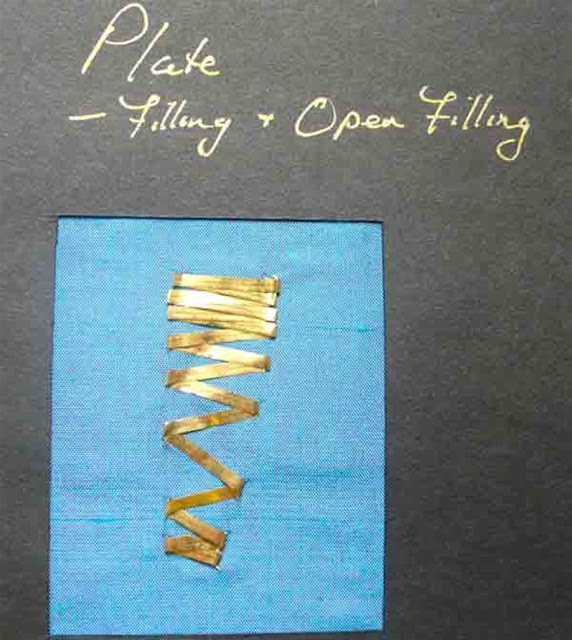 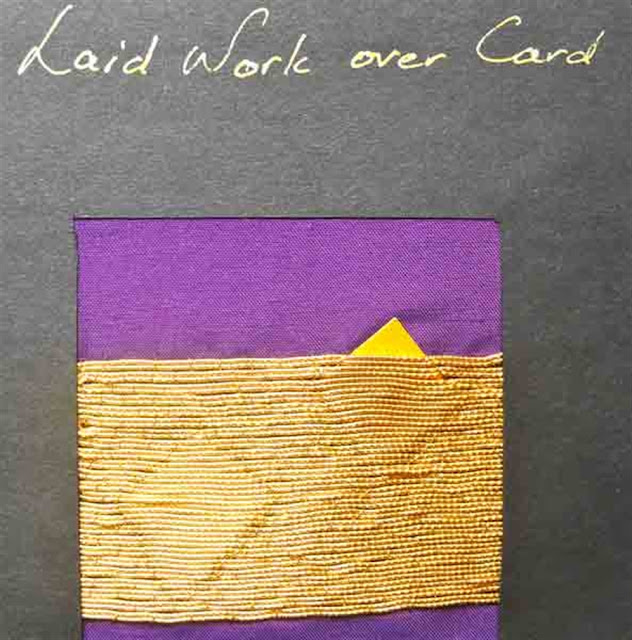 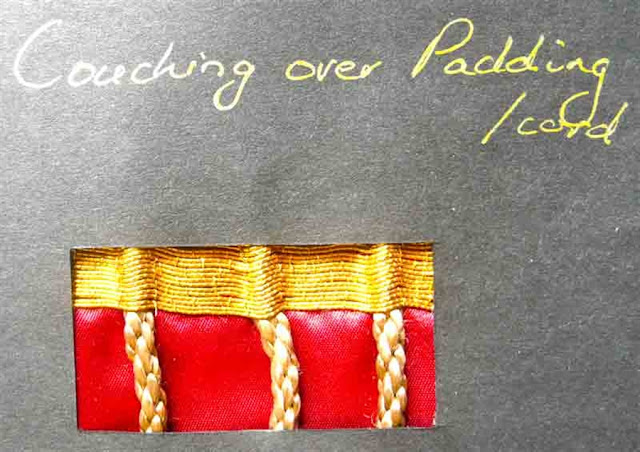 Frequently, gold work is padded. Sometimes the padding is either felt or cotton wadding, usually in a yellow color to be less visible between passes of thread, purl or strip.  Sometimes, when a more precise shape is desired, as is often the case in vestments or military regalia, cardboard is used to define a shape, roughly stitched down and then covered with whatever specific gold material is desired.
By far the most common technique is couching, where threads either matching or contrasting the gold, are passed over it at regular intervals to keep it in place. Small amounts of gold washed kidskin are also used, most times padded to create a smoother looking surface texture.  Often this results in leaves and scrolling forms of a gleaming surface. 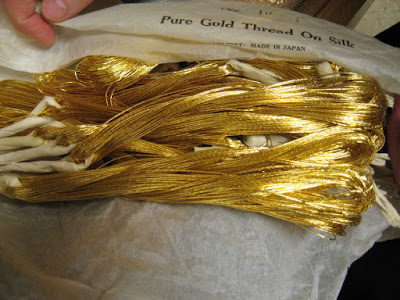 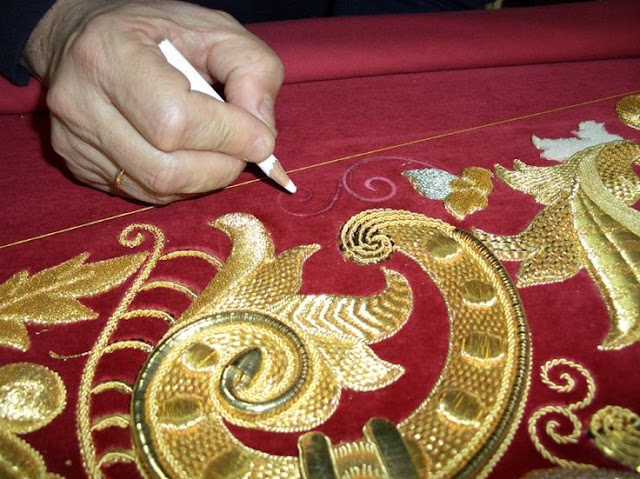 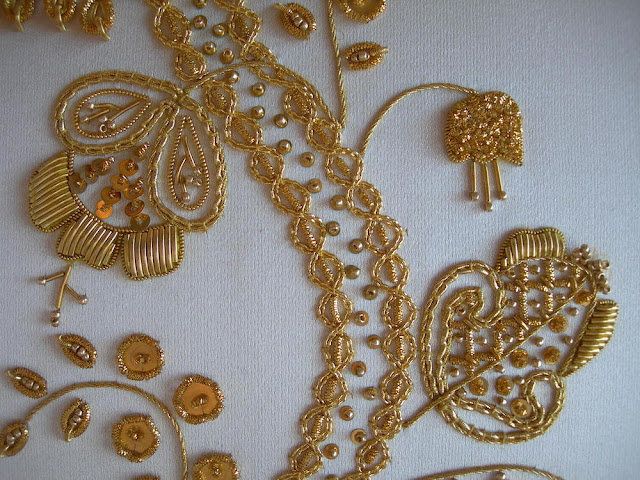 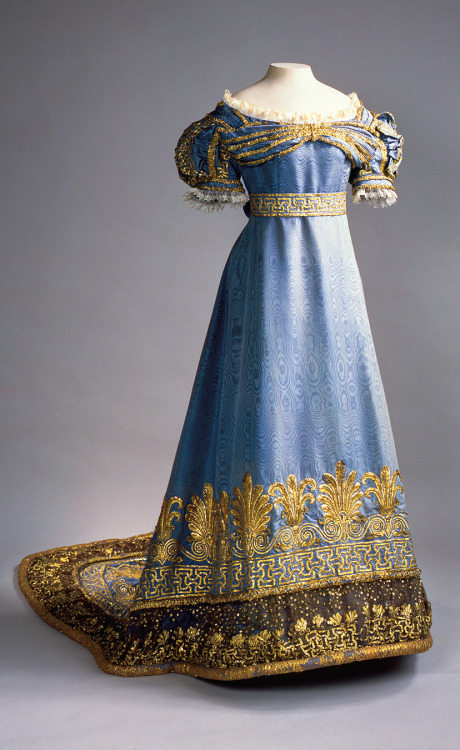 Along with the luxury of its appearance it has always functioned, regardless of culture, as a singular method of conveying wealth, status and taste. Because the materials in use are so dear, and the number of skilled people capable of doing the work so few, gold work was and is phenomenally, fabulously expensive.  Even now, when gold work is almost never actually gold, but either a composite containing some gold, or another material entirely, the basic stuffs are still pricey.  As an example, for this post I looked at several purveyors of supplies, and an 18 inch length of  2% gold purl will cost you about 4 US dollars.  When you think of how far that will go in an extensive piece, the costs mount rapidly.
So here is an example. 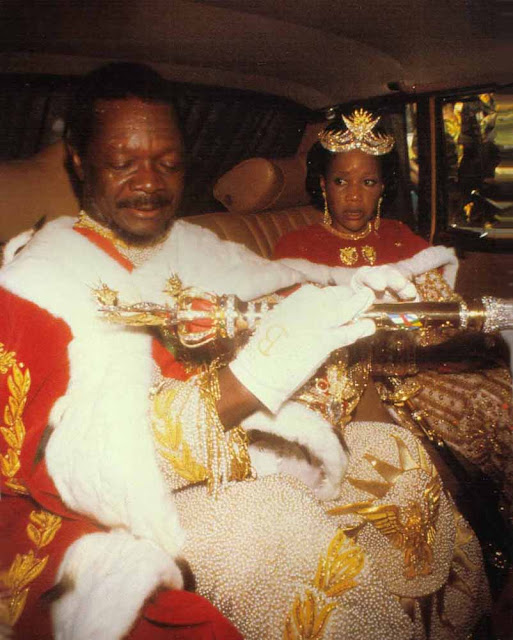 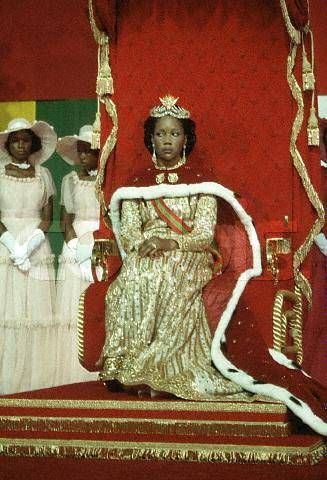 Self proclaimed Emperor Bokassa I of Central Africa is credited with commissioning the most expensive garment ever done at over one million dollars for the embroidery work alone (in 1977). The embroidery work for his empress Catherine's dress and cape, which measured over 20 feet with its train, took 12,000 hours of work time, and the combined weight of dress and cape was 130 pounds. This was largely due to the 18 karat gold beads and other gold work done on the dress and cape. Thinking in terms of person hours and cost, this translates to 6 complete years of unbroken labor on one project. Naturally many dozens of hands worked on this. But still it is a gasp worthy, and deeply revelatory expression how how much we will go through, how much we will expend to make sure others realize our importance. (Especially when we aren't too sure of it, ourselves)  His imperial reign, unrecognized internationally, lasted only three years, a telling statement about about what happens when you try too hard.
Yes, the appearance of evident wealth confers status, but only for a time, and eventually, only if it seems merited. So gold work continues to grab our attention, but not in quite the way it did before.  It means wealth, yes, but it no longer instantly signifies taste or sway.  Merely money.