Hello there, all.  I hope your week has been good to you.  It's time for your scatter post, so here we go! 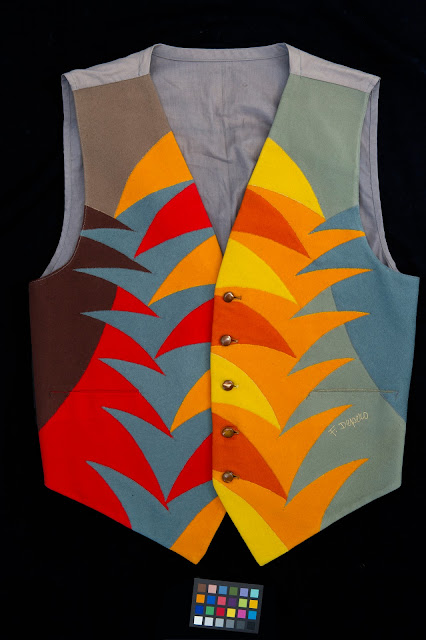 Italian Futurisist Artist and graphic designer Fortunato Depero was responsible for this men's waistcoat which he did in 1930, shortly after returning to Italy from several years in New York.  Futurism had as its prime goal a celebration of the dynamism of modern technology, and so it attempted to divorce itself from traditional image forms.  This piece has a fierce energy to it, and is also expertly constructed.  The surface is elaborately pieced, but there are no connecting points that are not smooth.  In that too it holds up Futurist ideals that connect directly to the precision of machine production.  This would be plenty edgy now, but in its time this was seriously avant garde.  The movement, which began in 1909 lost favor and dissipated after it became connected in the public's mind with the rise of Fascism in the 1930s. 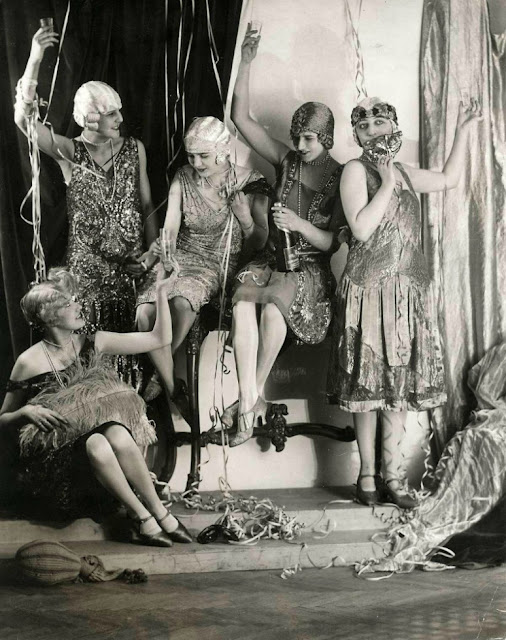 Girls gone wild, 1920s style.  This is what the party girls of the 20s looked like.  One of the interesting things here is that during this period wigs became quite popular as evening accessories.  At least three of the women in this image are wearing them.  They were made up in numerous styles, and often came in unusual colors, even in metallic versions.
It was one of the first times that women had the freedom to express themselves with such abandon.  Far more frankly sexy, somewhat aggressive, and far less willing to sideline themselves, it was a major step along the path to equality.  Sure the options for women were still limited, but expanding all the time.  Women were in the work force, going to college, and engaging in active sports to an unprecedented degree.  These party hearty girls were in their way, moving the conversation forward. 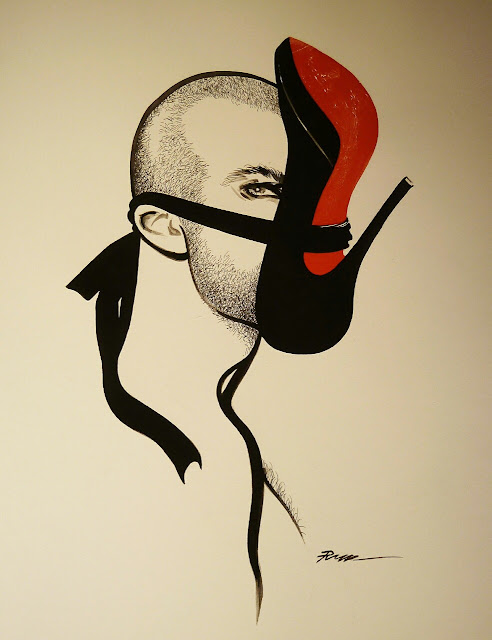 I was instantly impressed with how powerful this image is.  And it's power derives from Attire. If the man pictured was simply masked with a piece of black cloth the message would diminish tremendously.  But place a red soled platform pump over his nose and mouth and suddenly an immensely perverse and layered transmission happens.  It is the presence of an article of apparel, used in a way alien to its purpose that makes it perverse, and our minds begin to wonder, did he do this willingly?  Was it forced upon him?  How would we react in his place? 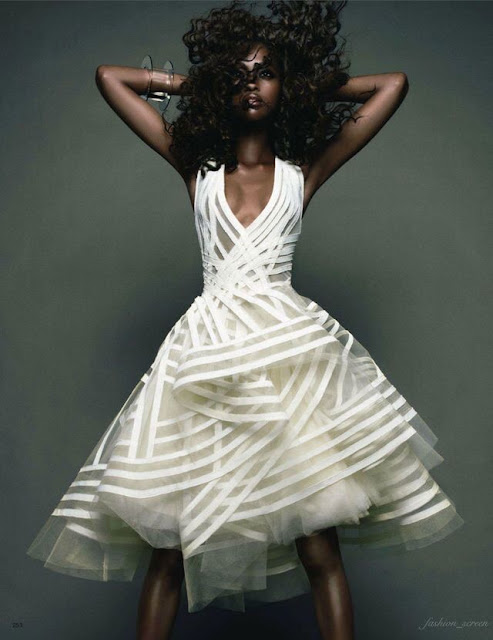 Working with stripes can be a tricky business, one false move and everything fails.  But in the hands of someone who knows what they are about, it can become effective in a way different from anything else.  This evening dress by Donna Karan is an example of that.  In her hands the overlapping, intersecting and sometimes arcing strips on the organdy base manage to work together to create strong movement, without exhausting the eye.  We move up and around the shape, but don't feel spent by it. 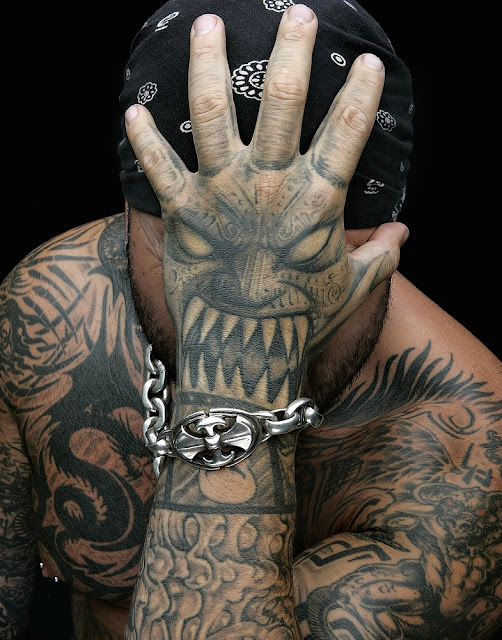 It doesn't surprise me, when I give it real thought, this modern fascination with tattooing.  We live in a culture which allows us unprecedented levels of personal interaction through social media and the web in general, yet we feel more disconnected than ever before.  It is no shock that, living in a world where everyone is talking at once, the only way to give adequate voice to some of our feelings and thoughts is to wear them permanently emblazoned on us.   This potent image shows us someone with numerous tattooed visualizations of anger, fear and violence.  Is this this person's way of dealing with those feelings?  Possibly, even probably so. 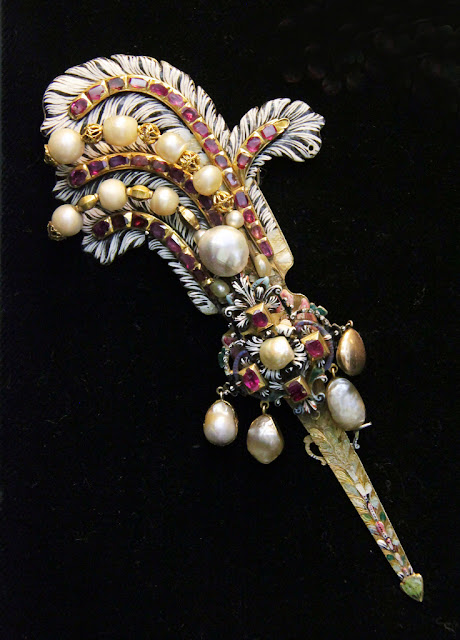 This brooch in the shape of an aigrette was made in Hungary in the 1600s.  Fashioned to look like a series of white ostrich plumes with ruby spines, the workmanship is very fine.  Enamels like this were one of the most common parts of jewelry at this time, with pearls running a close second.  Now that pearls are almost exclusively cultured rather than wild, they have lost a good deal of their cachet, but at the time, pearls, especially sizable ones like the central one here,  were hotly sought after, and widely prized.  A piece like this would have been important enough to be given as a love gift to a betrothed, or to a noble.  We are lucky it survives. 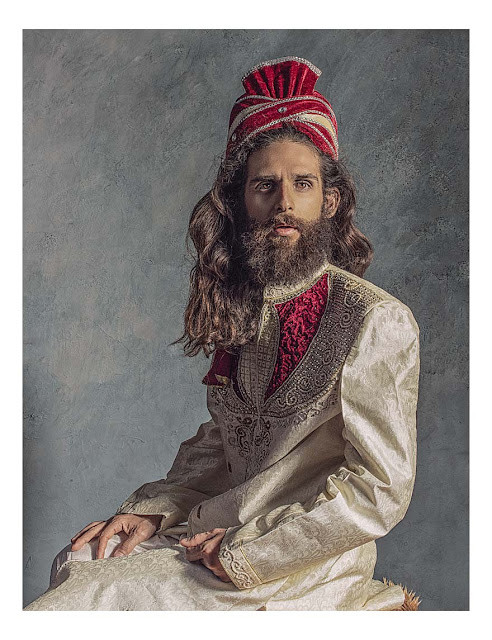 This portrait by Troy Schooneman really caught my attention.  Leaving aside any cultural appropriation thoughts, since they are too obvious to need mention.  What struck me next was that this Rajasthani suit doesn't really fit the model at all.  It's a good size too big for him.  While the turban seems too small, perched as it is on his mass of hair.  So what ends up being conveyed is less a sense of majesty and wealth than a sense of discomfort, of unease.  While the model's pose is easeful, the fact that his clothing does not fit makes him seem to us less comfortable, certainly not internally so.  It seems less his real self than something he was compelled to wear. 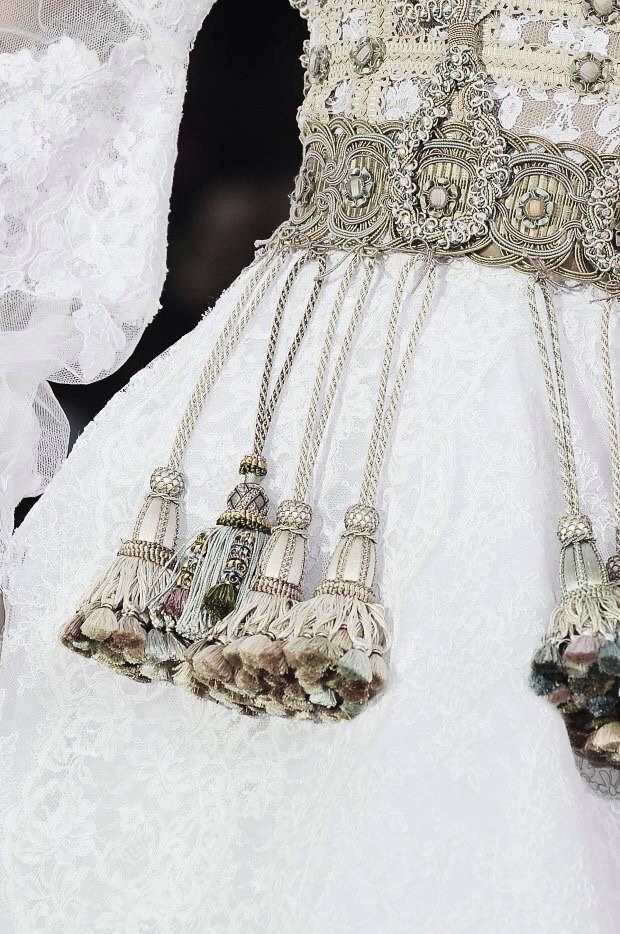 Styles of decoration vary over time as much as silhouette and choices of textiles do.  This detail image of a Franck Sorbier garment gives us a look at the reemergence of some types of decorative detail that have been in eclipse for decades.  Passementerie, which is a term applied to all manner of cording, guimp, fringe and tassels, has been largely off the table design wise for about 60 years.  But recently, and in part because of the beginnings of embellishment on menswear appearing, passementerie has resurfaced.  What will make this easier is that now the making of it can be largely mechanized, where in the past it was a slow and laborious hand work process.  Personally, I love the additional depth and texture it can afford. And for us normal mortals, a small amount of it applied as a detail can elevate and distinguish a garment with ease, and little cost. 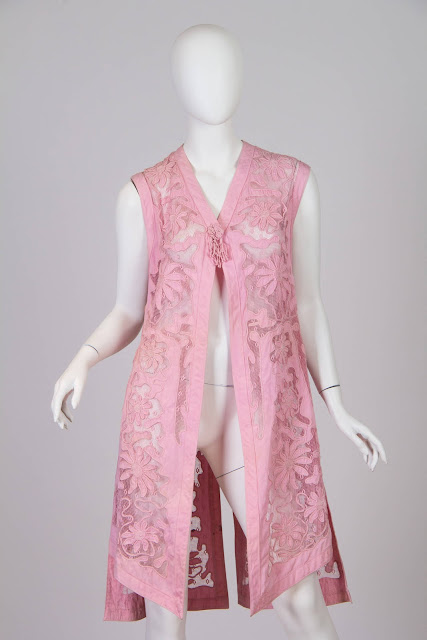 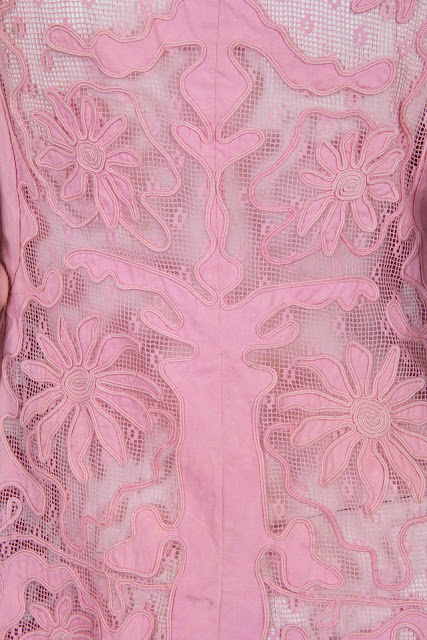 Sometime in the 1910s a skilled dressmaker took some cotton mesh and appliqued the surface of it with flowers and other forms in pink cotton and pink soutache braid.  The process of appliqueing to a fabric is tedious enough, but when doing so to a mesh material what must be done is more complex.  Since a mesh would only allow the applique to be attached at specific points, it must be reinforced with some other thing, in this case the soutache braid that creates a firmer structure for the mesh to be sewn to.  All in all this is a charming, and expertly handled piece of work. I'm sure the lucky woman who owned it did so with confidence. 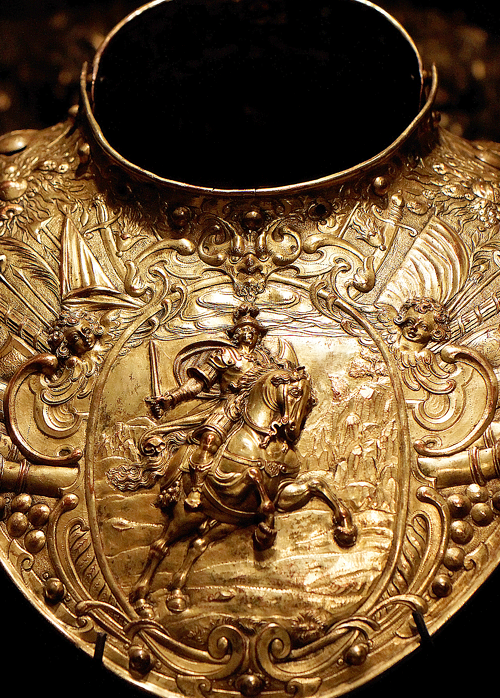 This particular piece of armor is called a gorget, worn to protect the upper chest, neck and shoulders from blows in battle.  This one, of gold was made for Louis XIII and depicts the king charging into battle, with the sides decorated with various trophies of battle regalia.   In art and design of the time a trophy was a collection of objects meant to symbolize a trade, an action, emotion, or spiritual state, like Honor, or Science.  This is of course parade armor, never meant to actually see battle, and the craftsmanship of it is amazing.  It's a remarkable work of art, even though it exists to glorify war, (and the king). 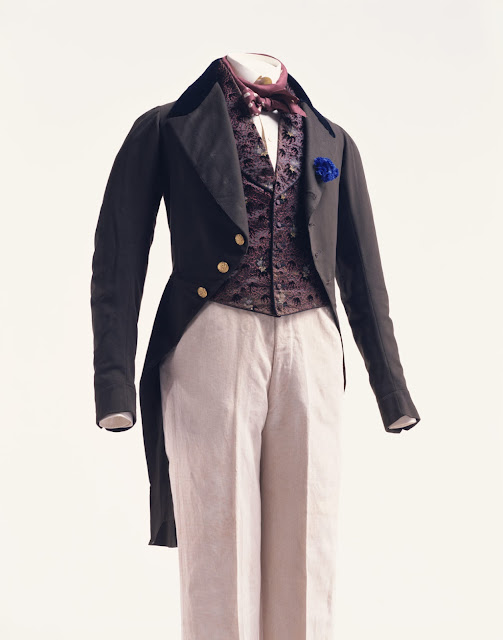 By the 1830s the contraction of options for menswear had nearly reached it's ultimate expression.  This suit, which is part of the Kyoto Costume Institute's collection is a perfect example of that slow diminishment.  The trousers and jacket have the beginnings of the precision tailoring that will become the hallmark of menswear in the 1800s.  The color palette has narrowed almost as far as it will later.  And the only remnants of the prior century's exuberant menswear is the waistcoat and cravat.  It's also interesting to look at this jacket, because it will morph in time into the tail coat that we know today as the most formal of attire for men.  Here though, it is part of a day ensemble of clothing. 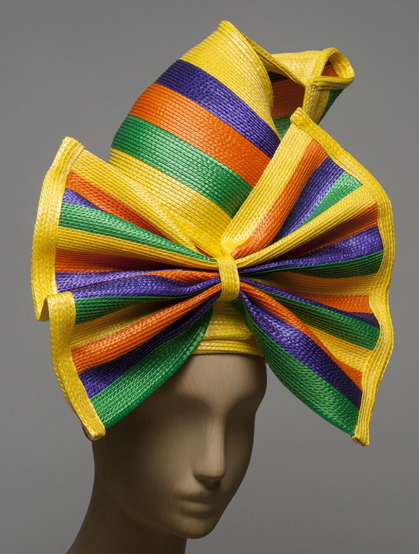 The last in the line up this week is this amazingly gaudy, and utterly delightful hat.  Made by Carlos' New York Hats in 1993, it is created of four brilliant colors of finely plaited straw, twisted up into a Carmen Miranda-like turban shape with a vast bow.  It would take a person with a good deal of self possession to pull this off without it taking over entirely. But I gotta say, I think I'd really like the person who could.  Yes indeedy, I would.

That's the wrap, folks for this week. So, go out and have yourselves some fun!
Posted by Paul G. Ellis at 5:29 AM