I gotta say I look forward to these weekly amalgams of odd things I dredge up and throw out at you.  I do.  It's fun selecting them and figuring out what I want/ need to say about each.  I hope you enjoy it too.  Herewith this week's set of entrants in the Scatter Sweepstakes. 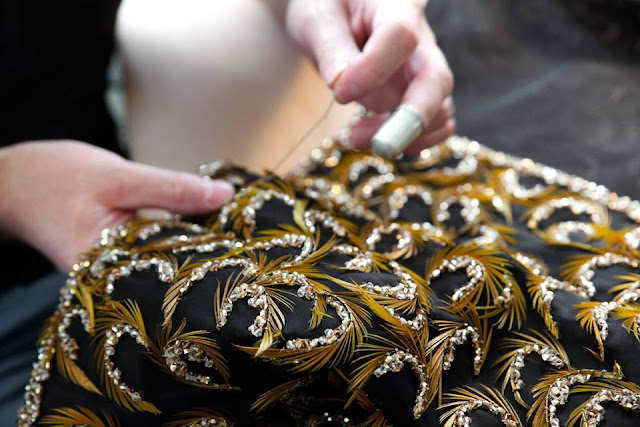 This image of an atelier worker finishing some couture embroidery work made me think of two things really.  First is our ongoing desire to take the natural world and transform it, both by using things from it in unexpected ways and by referencing things we encounter as parts of our apparel.  This embroidery design takes feathers, and by processing them changes how they appear so that they might be taken for bits of straw, but then re-changes them in the act of making the design, back into feathers; this time with their spines replaced by glittering glass stones.  It's rather like a piece of jewelry made from gold that is deliberately formed to look like a raw nugget of the metal it's made from, but through artifice, perfected, shifted. 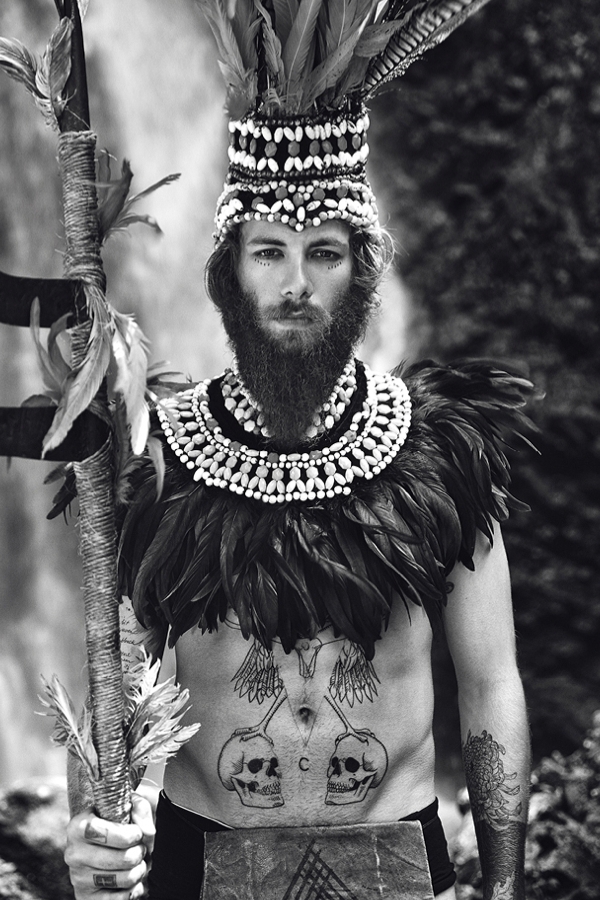 This for me isn't so much about cultural appropriation as it is about not knowing what we are about.  Even if this is meant to be costume, its ability to communicate effectively is hampered by a lack of understanding of the elements in use, and the dissonance of the hipstery tattoos with the tribal attire.  Whether the clothes worn here belong to an actual culture or not I don't know, but the result is the same.  It comes across as half hearted, ill considered, because the choices made here don't relate to the person in them.  It's a strong example of what we do each day when we dress ourselves. Does what we choose suit our interior and exterior selves?  If so, then great.  But if one or the other doesn't align, then those who see us, can see that. 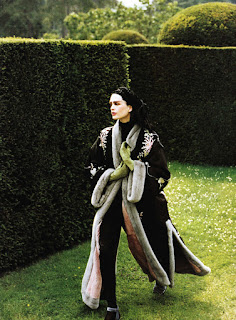 Apart from delivering staggeringly expensive clothing to a tiny segment of the population, the couture industry supplies something else that we all need and want, fantasy.  We need dreams to aspire to, even if they aren't things we actually want.  We still need to be able to place ourselves elsewhere for a time, and wonder about what it would be like if we were that person, or doing that thing, or wearing those clothes.  This fashion shoot image is of a Jean Paul Gaultier coat from the 1997-1998 season.  The evident luxury is beguiling. How would it feel, and where would we be going if we were in that coat?  Our daydreams are important. 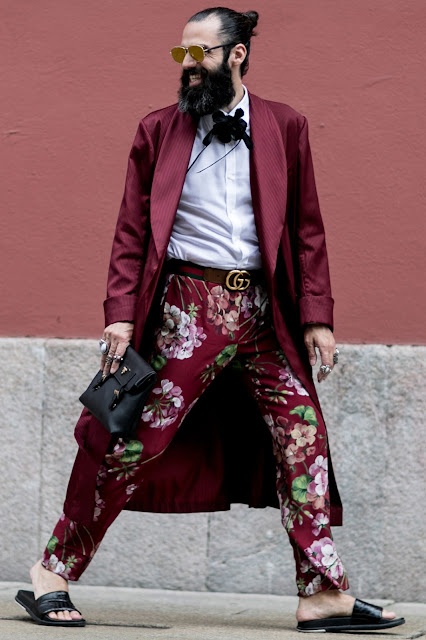 Granted this fellow, captured at the most recent Pitti Uomo in Milan is expensively dressed, but the point here is that this sort of individuality of Attire is not out of reach for the rest of us.  All the articles here can be found in slightly different versions that could create the same visual effect.  It comes down to what amount of effort one is willing to expend to find and utilize the words in an Attire vocabulary. I love that this is also an example of the emergence of strong floral prints for men, but seen in the real world, not a runway.  The entire ensemble here speaks about the shifts that are in process for men, and how they view themselves in our society.  Bravo dude, you brought it. 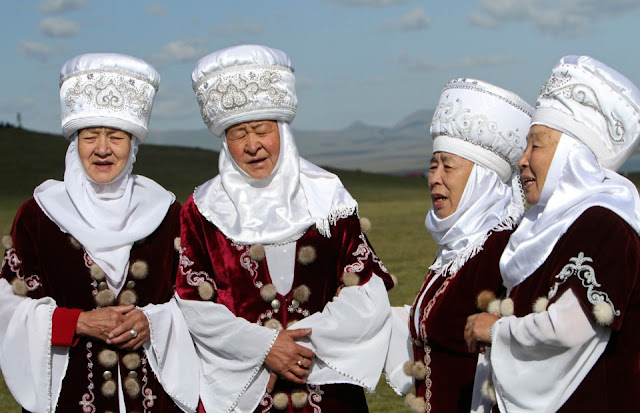 In the Naryn province of Kyrgyzstan festival dress looks like this for the women of the region.  What strikes me here is another example of how endless is our human creativity.  In an area that is cold and severe this elegant and cultivated manner of dress emerges.  Sure, it's festival attire and as such is a more elaborate, and costly version of traditional dress.  That is true.  It just makes me smile inside and out that we find no end of ways to make ourselves marvelous.  As a small side note, the area where these women are singing is near Song Kol lake, which is 10499 feet above sea level.  Just think about singing nearly 2 miles up.  Them's some lungs.  We are amazingly adaptable beings. 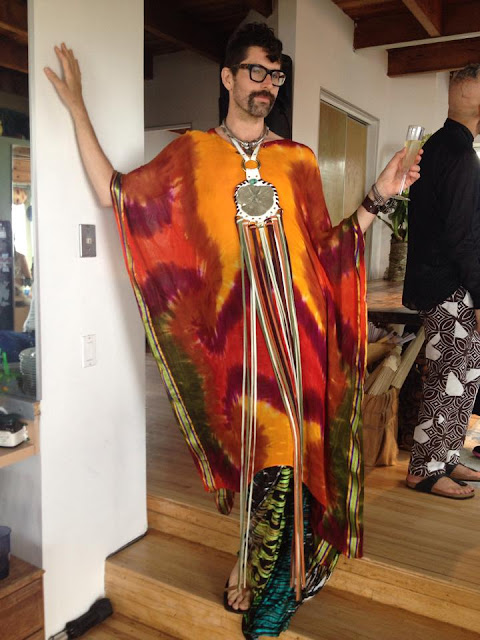 I say go for it.  If you're feeling the 70s love, then go there, and don't hold back.  Grab your tie dyed caftan, and the biggest piece of statement jewelry you can find.  Honestly, I'm delighted by this.  I suspect this isn't this fellow's everyday attire, but who cares?  To me it's a great option to play with.  Let yourself free to express, to move, and to find perhaps a chunk of yourself that lays hidden most of the time. 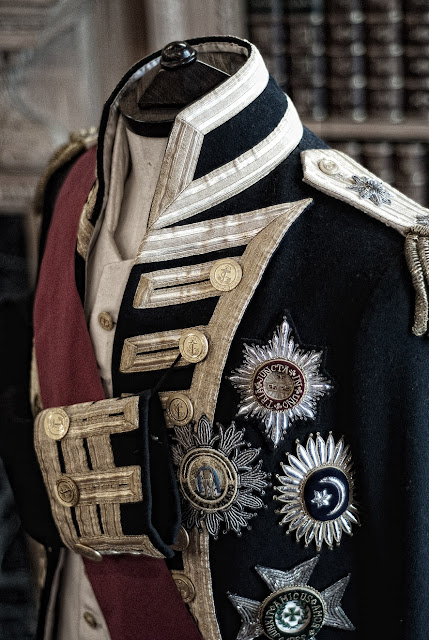 For over 300 years the London based firm of Ede & Ravenscroft has been in the tailoring business, with a strong focus on professional uniforms from clerical, and legal to military and royal.  What we forget is well into the beginning of the 20th century men entering the military in an officer capacity were required to approach either their own tailors, or a firm like Ede & Ravenscroft for their uniforms.  So where today in the military uniforms are truly that, uniform in cut, fit, and construction, there used to be a huge range of quality based on the officer's means, and the skills of his chosen tailor.  Of course a new officer would be encouraged to use a well known tailor so that the regiment would not be disgraced, but there was still some variation to be expected.  This image shows off the precision and elaboration of their work admirably. 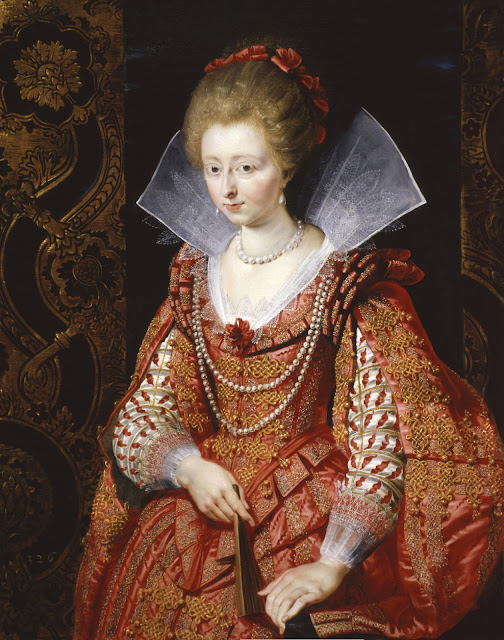 Say hello to Charlotte Margeurite de Montmorency, Princess de Conde'.  Peter Paul Rubens painted her in about 1610 in this amazing ensemble.  It's an interesting combination of new and old fashions.  Her lawn and lace collar follows the newer fashion for a flat surface, but clings to the older one of a wired, standing collar.  Her dress and sleeves are both extensively slashed, a fashion which was quickly fading by this time. Also, the use of long false sleeves that were open along the entire front seam to the cuff was sliding out of use.  What keeps her from looking out of pace is the inescapable opulence of her costume.  No one would challenge her about her choices when so much obvious wealth was brought to bear to make this outfit happen.   There is very little of the surface of her red satin dress that has not been plated with decoration.  It's all about saying, "Look at me!". 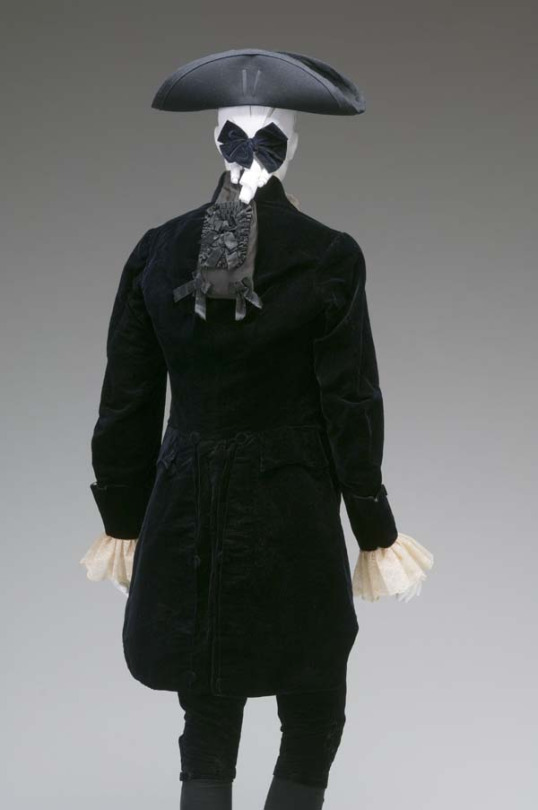 Here is a real rarity.  We know from portraiture and fashion images that formal men's attire required what was called a wig bag. It was a cloth bag that was meant to encase the lower portion of a man's wig, and it was often, like here, decorated with ribbons, guimpe or embroidery.  Yes. it's an especial absurdity that we would devise a wig, and then insist on a bag to put it in that you had to wear, but our history through Attire is loaded with such weirdness.  The other item of note here is that this suit is quite unusual in that the lace cuffs you see are actually attached to the interior of the coat sleeves, and are not part of the shirt.  Though it is known that this was done, almost no examples exist of it in real terms.  I suspect that is mostly owing to the great expense of lace, which would mean that it would have been used elsewhere once a suit was not used any longer.  So this image has two oddities in it. 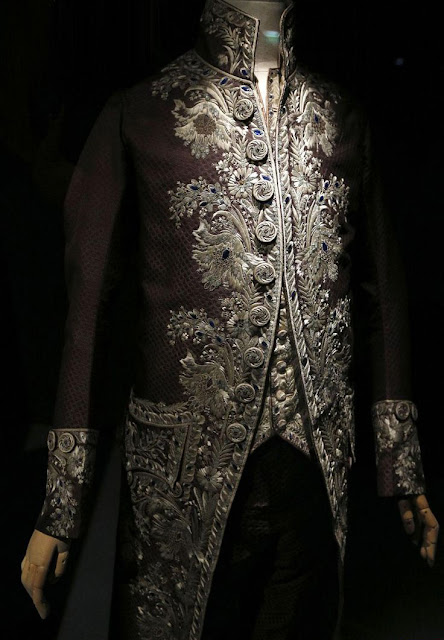 Here's something else from around the same time, 1780.  This is one of the most extravagant men's suits I've ever seen.  The amount and the quality of the embroidery on the coat and waistcoat is amazing.  Worked in a narrow palette of white and pale grey silk flosses, the finished work gives the appearance of being silver. It is a piece of extreme elegance, and a testimonial to the very high level of craft able to be brought to bear on men's clothing at the time.  I'll take one, please. 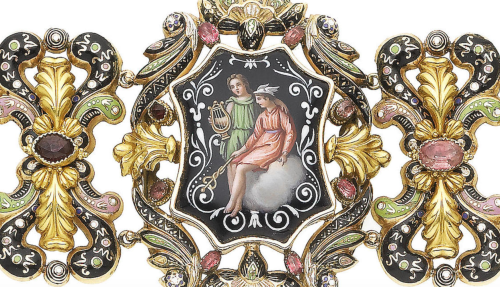 To finish out this week's grouping, a bit-o-bling.  This gold bracelet was made in 1840. The center medallion of enamel work depicts Mercury presenting a lyre to Apollo.  The Renaissance Revival style of the bracelet is enhanced by the extensive amount of high quality enamel. It's also set with amethyst, and pink topaz stones.  Every period seems to develop a fascination for some other time.  But the Victorians were unique in that they spread that fascination around so far. Their appreciation for times other than their own seemed to have few limits either of period or real knowledge.  What they didn't know for sure, they made up.  Just like this bracelet with it's faceted stones which would most likely not have been in use.

So, now that you've had your dose of Scatter, it's time to get on with your weekend.  Have fun!  See you next week.