Among the seemingly endless list of things Napoleon Bonaparte attempted during his reign as Emperor of France was the establishment of particular court apparel for every rank and sort. This suit,  auctioned through Charles A Whitaker Auction Company in 2015, (which was listed at 3000 dollars), is from the early part of the 1800s.  What is especially interesting is the presence on the cape of the Napoleonic Bee, and of oak leaves, which were consistent images throughout the apparel of the court at that time.  Do we know of a certainty that this was a court costume for a gentleman of Napoleon's world?  We do not.  But it seems likely both in the presence of those images, and by the emphatic and somewhat overblown style of the clothes as a whole, that this was meant to be suitable court apparel for a gentleman under Napoleon's suzerainty. 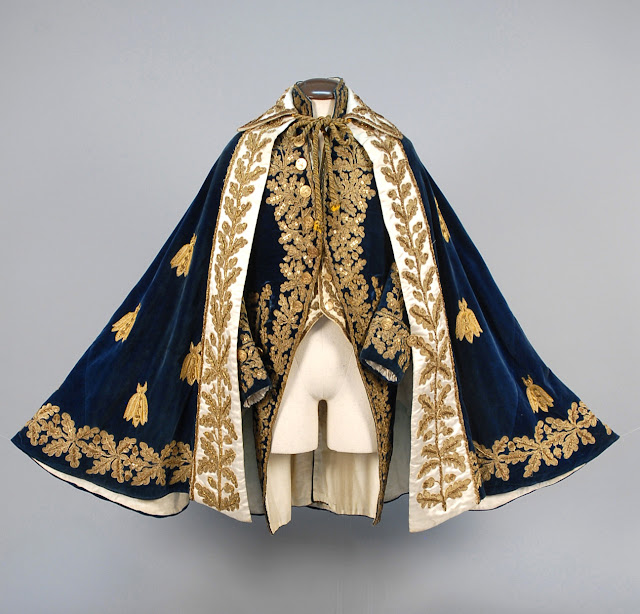 The extreme formality of this ensemble cannot be denied.  It was meant, regardless of its ultimate province, for the very highest of occasions.  As such it contributes to the idea that this was indeed a court outfit for a highly placed gentleman of Napoleon's court.  Or, at very least, someone who wanted to make a positive impression there. 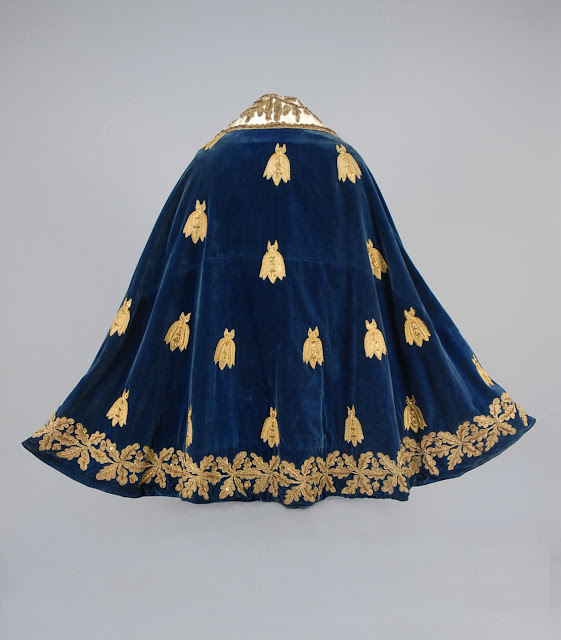 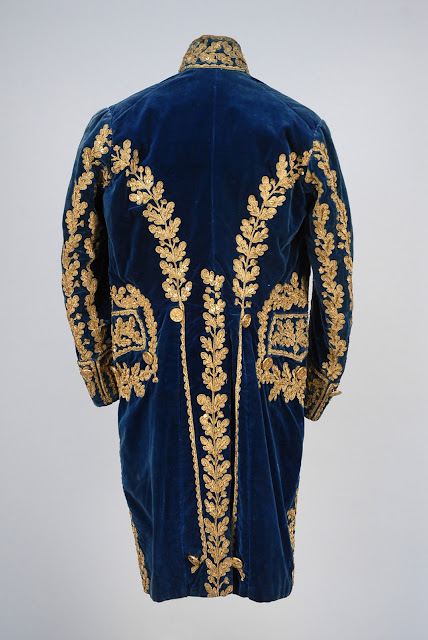 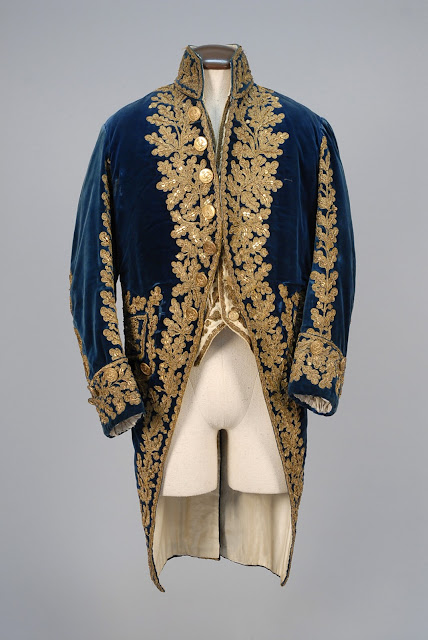 Made up in highest quality silk velvet of an intense royal blue, the embroidery shows a singular characteristic.  It seems hasty.  The bees on the cape seem sketched in the most lackadaisical fashion. And the other work lacks the depth and texture of so much of what survives from the same time. The work done on this ensemble, was either done in an very short period, or the client was a person of limited means who could not afford the ultimate level of embellishment possible from embroiderers.  This ensemble is about flash and dazzle, not about substance.  The embroidered work in gold is simplistic, and even to a degree rough in its execution. Perhaps the person who wore this had been only shortly called, without preamble, to court, and had to configure something acceptable in nearly no time whatever.  It's one of the clues we get from clothing of other eras when we look more deeply.  It's a peek into the motivations and reality of someone long gone, to see the finished product that they ordered, and look at what they got for their time and money. 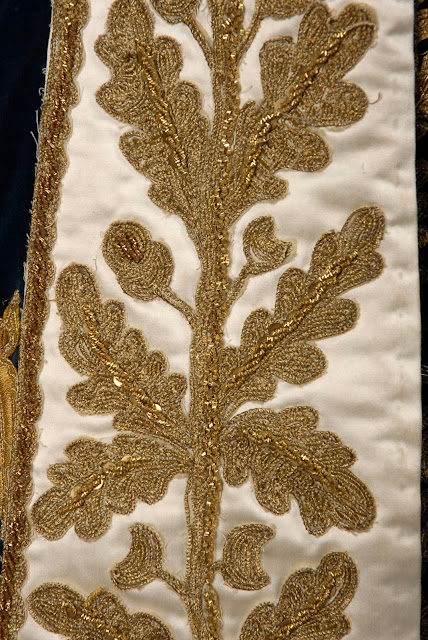 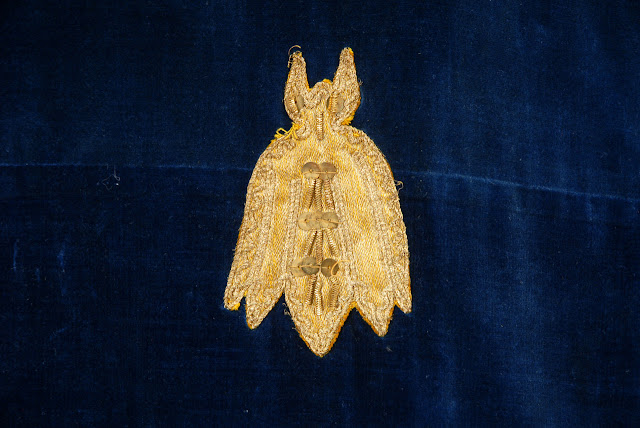 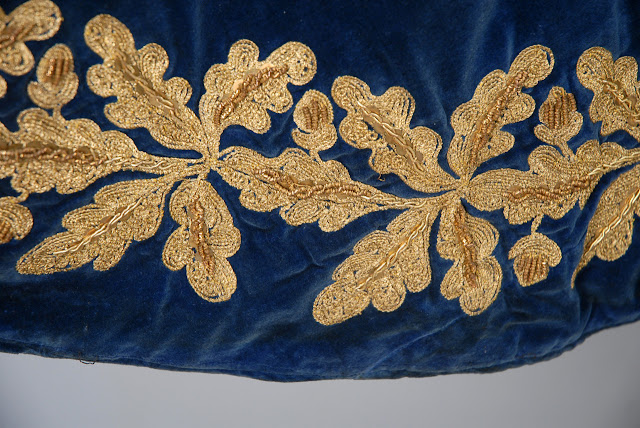 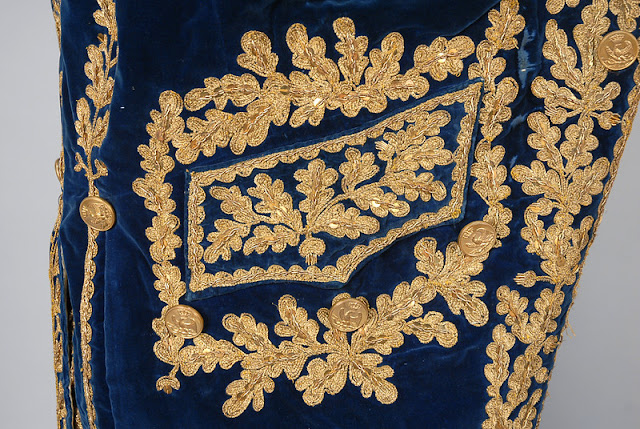 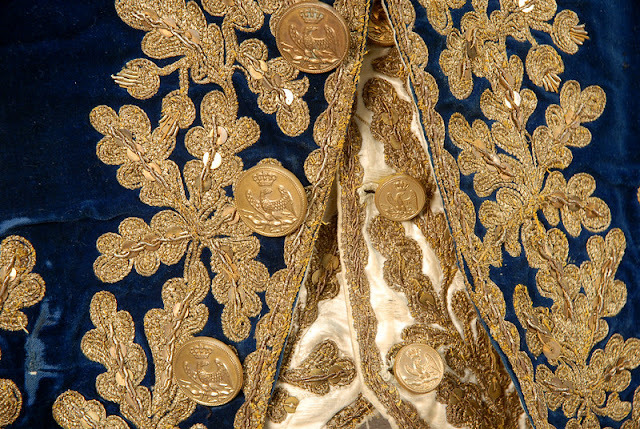 The choice of color here is singular.  This shade of blue, even in the 1800s was one reserved for those of the highest noble rank. There is a reason why it was called "Royal Blue".  It was a hue sequestered into the narrow confines of rulers, like Imperial Purple.  So if the person who ordered this was not actually a royal, they were inviting scorn when they approached the Emperor.
So much of what we do when we look at these things is little more than educated guessing.  I know that myself.  Yet there are compelling things here that point to something more than is superficially apparent.  Observing the small details of decoration and construction, we see that this was something out of the ordinary.  This was not the suit of some established, vastly wealthy courtier.  This was something belonging to someone who needed to make their way, and spent all they could to get there.  What is the enduring mystery is, did he make it?