Morning All!  it's time for your weekly trip through the dim recesses of my brain, those dusty corridors where who knows what might be lurking.  Now that I've made you apprehensive, lets take a stroll, shall we? 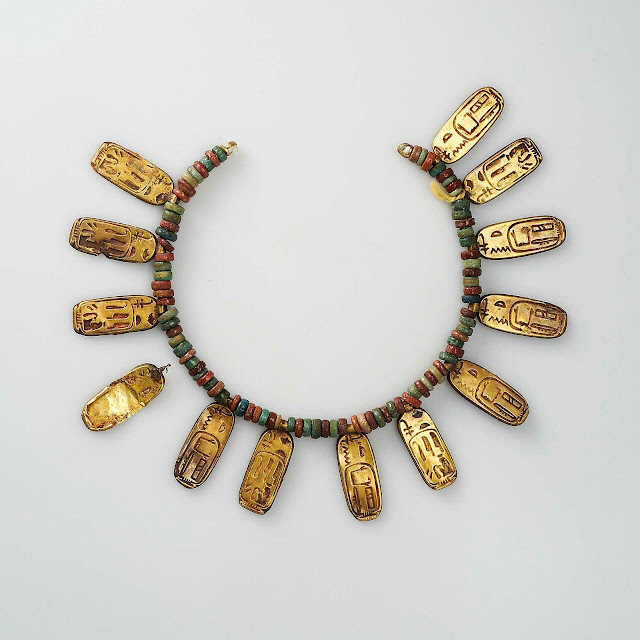 This necklace is from the late period of the 25th Dynasty in Egypt, roughly 760 to 660 BCE. The cartouche beads in gold have two different sets of hieroglyphs on them.  I was struck right off by the simple, straightforward design of this.  I suppose we could decide that such a construct is an obvious one, with the rhythm of the piece evenly distributed by the spacing of the plaques.  But what also comes up for me is that this is an example of how well ingrained our sense of order and beauty is.  This same pattern is so primal, so basic to us that it gets repeated in every culture on earth, and has been so for as long as we've been around, I suspect.  We understand the geometric relationships instantly, whoever we are and wherever we are from.  Plus, it's simply lovely.  And maybe that is why it's lovely. 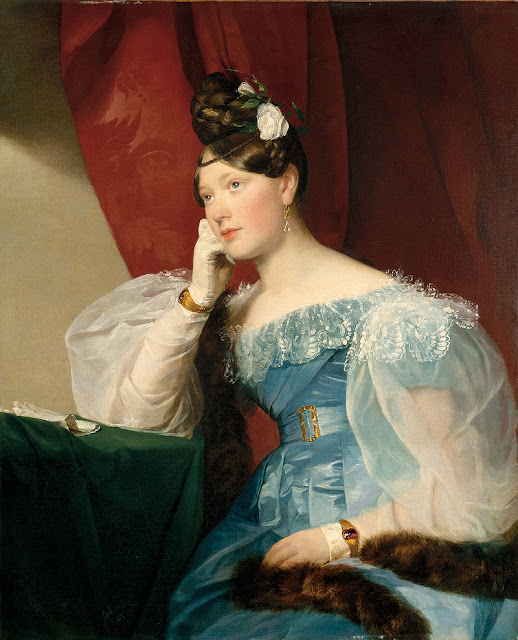 A week or so back I posted a garment from the 1820s that has stymied the apparel historians because it looks like a gown of the 1820s to 30s, but it has no sleeves, and though the possibility exists that it is an undergown, the design of the bodice suggests otherwise.  I had stated that dresses of the time always, always had sleeves, even if only vestigial ones.  Here is an example of what I meant.  This is Julie, Countess of Wonya as painted by Frederich von Amerling in 1832. Her gown has tiny puffed sleeves, more like those in fashion more than a decade earlier, but she also has huge oversleeves of what appears to be organdy.  Sleeveless dresses were not socially acceptable. It was a class distinction issue.  Only women who had hard labor to do might be seen entirely sleeveless.  All this said, We still don't really know about the use of that first piece.  Likely we never will. 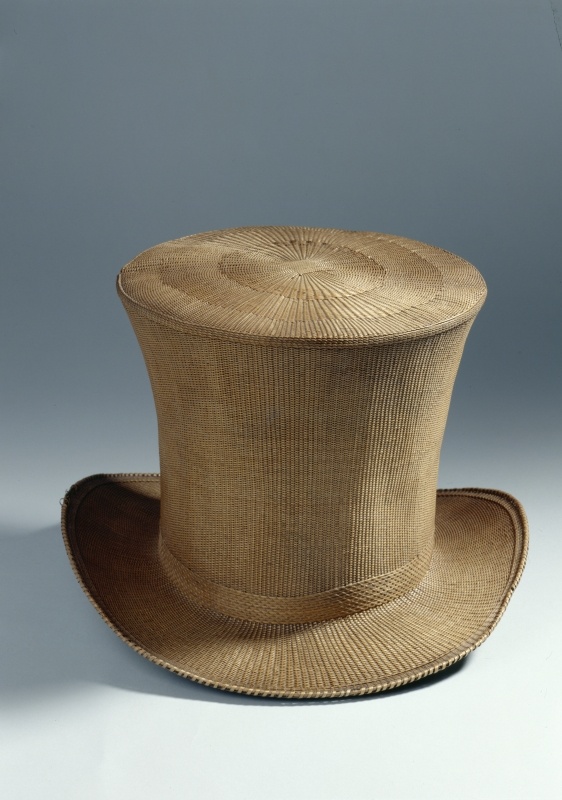 This article is a true rarity. There are only a handful of these summer top hats known to exist.  I'm posting this today partly for that reason, partly as an expression of cultural rules, and partly because of the obvious high level of craft that was brought to bear to make it.  As a marker of social rules, it's fascinating that regardless of weather, it was not acceptable for a gentleman to be seen out of doors without his top hat.  I can imagine the poor bloke who owned this quietly sweltering in his wool coat, silk waistcoat, cravat and collar.  But the straw topper was at least a bit less heavy on the brow than the rigid and weighty wool felt of fur ones for other seasons.  As to the structure of it, I love that every detail of a regular top hat has been reproduced in straw, down to the bias band that normally trims the outer edge of the hat brim.  Love this. 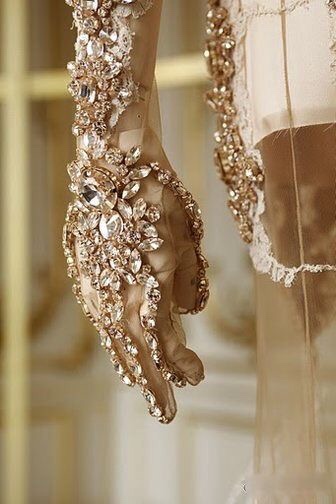 While it's true that we have been adorning clothing with false gems for as long as we've been able to make them, what is different today is the scale of those fakes.  Where in days past the glass paste gems and rhinestones were discretely sized, now it seems bulky, obviously fake stones are all the thing.  It makes me wonder what this says about us, culturally.  Is it a reflection of our growing need to be noticed in an overstimulated and surfeited society? Or is it more a marketing ploy that helps keep Swarovski a global luxury brand instead of simply a maker of rhinestones?  As a side note, I wonder too if the fact that they are showing up on nearly every item of apparel from stockings and shoes, to bags and gloves as also an indicator of our need for notice in a cluttered world. 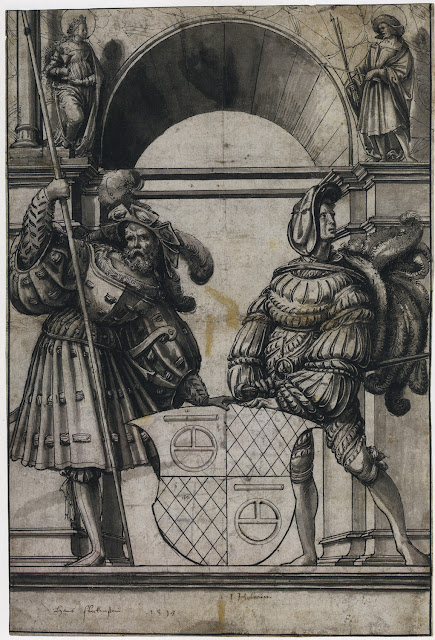 The soldiers of the Landsknecht, German mercenary soldiers of great reputation distinguished themselves with some of the most outlandish clothing Western culture has ever seen.  Taking the fashion for slashing to unheard of levels and blowing the scale of their clothes up huge they were a set of soldier dandies who regularly tried to outdo each other with the level of their  peacock display.  This Work is by Hans Holbein the Younger and shows us a couple of dashing Landsknecht gents sporting their work clothes.  They were primarily pikemen, and foot soldiers, and became for a time the got to mercenaries throughout Europe, because of their great skills. 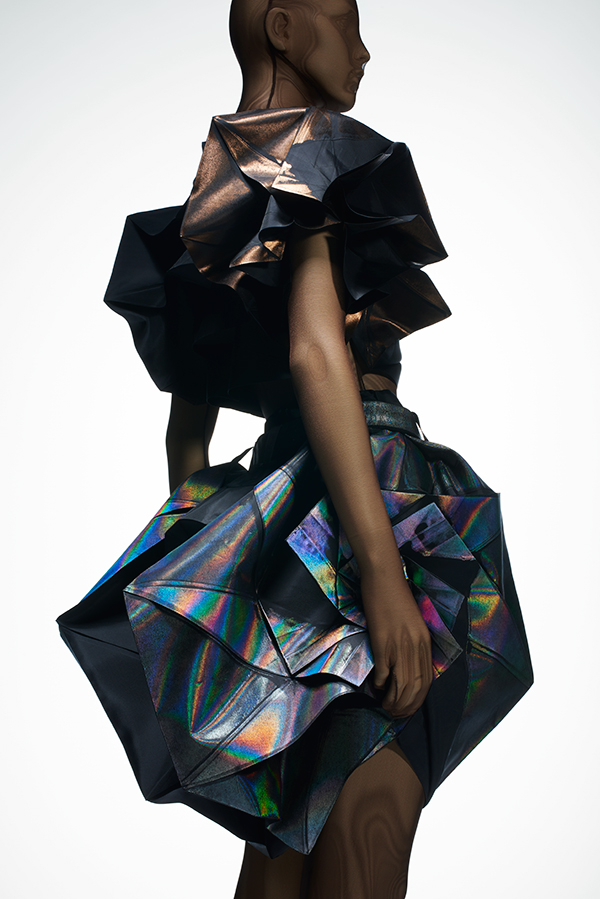 One of the things I love about the work of designer Issey Miyake is his willingness to work with outlandish , and sometimes, (as here) custom made textiles to achieve what he's after.  This iridescent, and very geometrical design is created out of recycled plastic bottles.  One of the other things I love about his work is that, regardless of the material in use, there is never a time when ease of motion and comfort are forgotten.  Having seen and touched many of his works over the years, I've always been amazed at their lightness and fluidity of motion, even if they appear rock rigid. So, however crystalline this might look, it is probably able to slide over the body effortlessly. 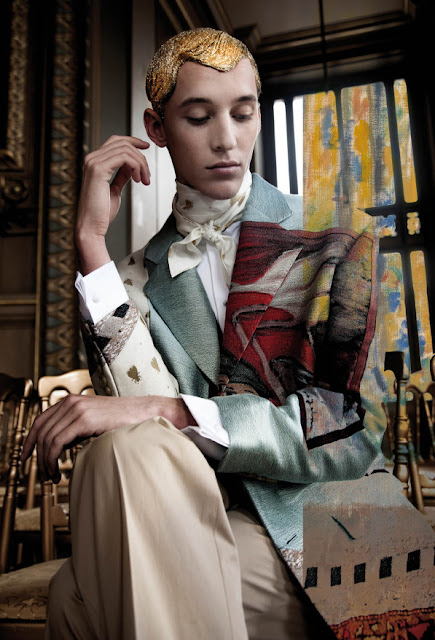 I do love dandyism. And when it manifests these days I love it even more.  This fashion shoot of a Walter Van Bierendonck outfit is just what I mean.  While none of the individual pieces is structurally unusual, the combination of finishes and textures, along with that boldly stated print on the jacket, make this an expression that is nearly operatic in it's effect.  The point here is really that this manner of dress is not outside the reach of most of us, should we wish it.  Sure we may not be able to afford these exact pieces, but the look itself, the nature of it is doable. Loosely fitted tan trousers, white shirt, neckerchief, and an emphatic coat; not impossible at all. 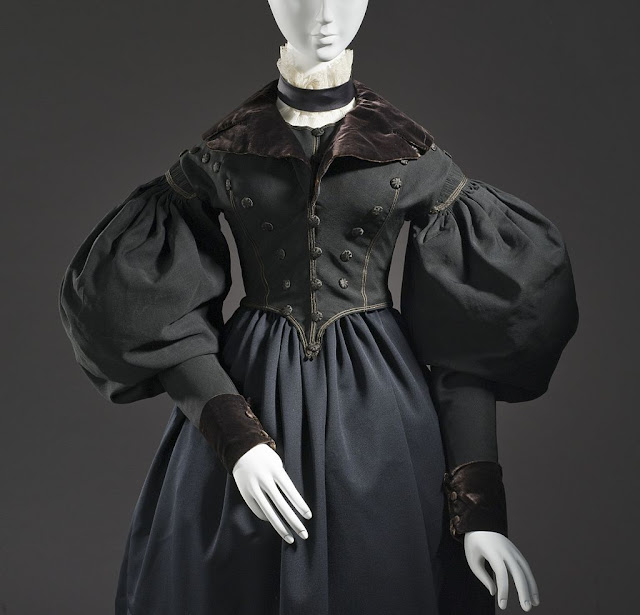 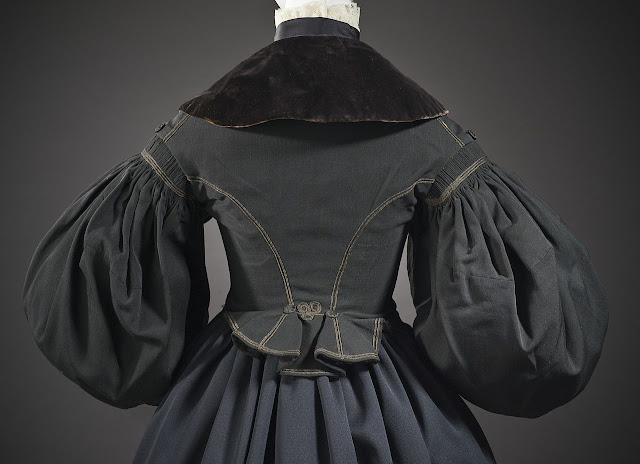 By the later 1700s riding had become a sport women were encouraged to pursue, so of course clothing appropriate to the activity began to emerge.  Shorter coats, or those with cutaway fronts for ease of riding became the norm, especially one's with a strong menswear spin to them.  This one is from 1835.  It's made of a mid-weight worsted wool, with plush collar and cuffs that were probably once black, but have faded to brown.  In the second image you can see clearly how all that volume in the sleeve is controlled.  A row of very fine cartridge pleats is set into the rear of the armseye to keep all that fabric in check.  Milady would also have worn a top hat just like a gents, and a skirt deliberately longer on one side so that sitting sidesaddle, the hem would appear to be correct. 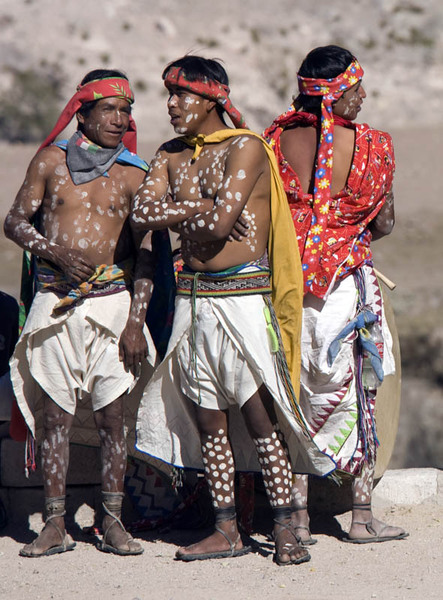 The Tarahumara people of northern Mexico still utilize what is very probably the oldest Attire word of all.  They paint their bodies with dots, just as our unknowable ancestors did who knows how many eons ago.  In the past, it is likely that it was white clay or possibly chalk, rather than the kind of paint they use now.  In their culture they adorn themselves this way for a specific festival that honors the dead.  The white dots represent stars, and the spirits of those relatives who have passed away. 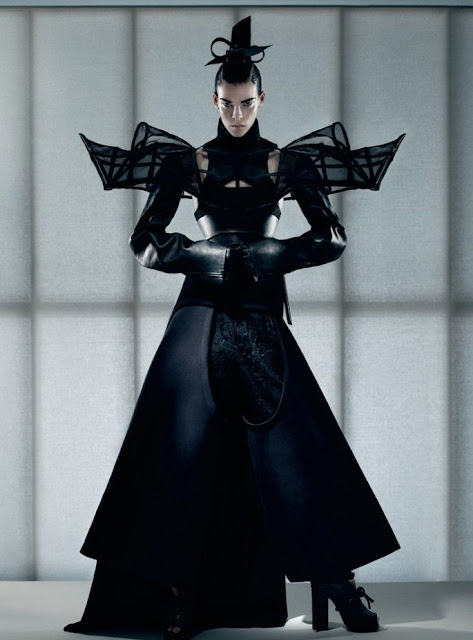 Yes, this has veered all the way to costume territory, and I just don't care a fig.  The model has become some dangerous space age android villain.  Honestly though, I'm fascinated by the horsehair braid and boning collar which, though utterly impractical is just wonderfully grand.  I'm also intrigued by the textured pants with the stiff, belled chaps over them.  It's actually a concept that could be scaled back and used in real world terms.  I'd like to see someone play with these ideas in a more wearable way. 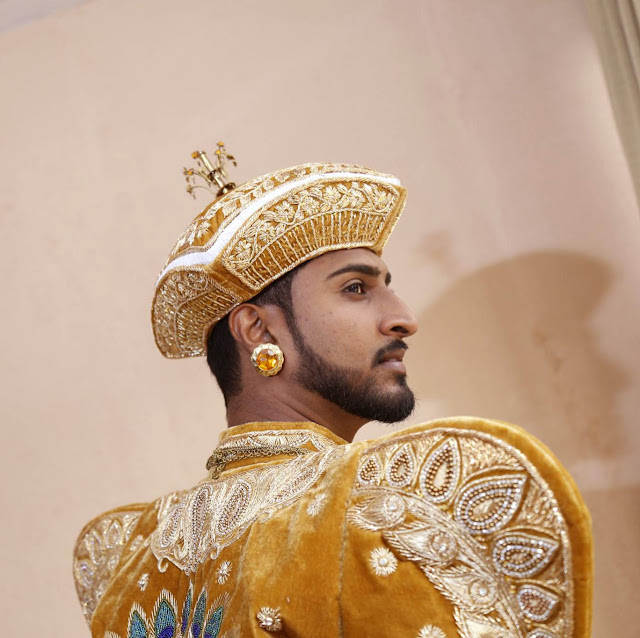 Okay, I will admit it freely.  Yes, i think he's gorgeous.  So that's out of the way.  In reference to the post I did about gold work embroidery, this example.  One of the few cultures that still employs it often is that of India.  I love the unusual hat, and how the arc of its shape is carried through in the line of the extended shoulder.  I even like the small post on the hat with its dangling spangles.  In my fantasy world, men would get to dress like this without raising a single unpleasant eyebrow. Sighs happily. 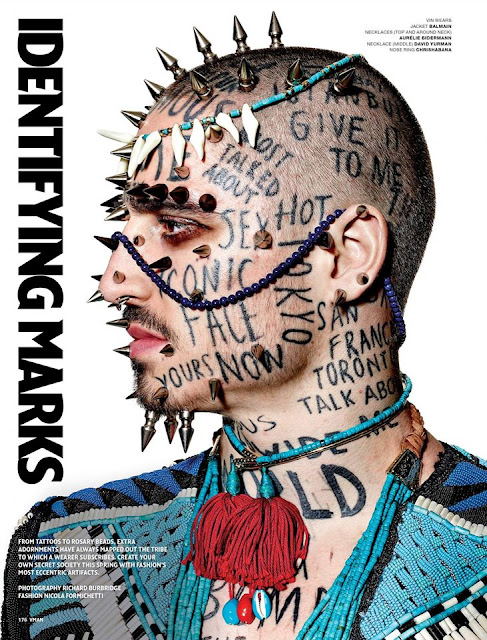 The final shot today is from V Man magazine.  When I came across it, I stopped dead.  It's about as potent an illustration of the extremities we will go to to mark ourselves as individuals in this day and age. For a growing number of people it is not enough to dress in a unique way, or do their hair a particular way. The body itself must be altered, with inks, piercings, and surgical implants.  It speaks about a kind of desperation we feel.  Our population continues to grow, and we are constantly assaulted with images, and sounds that compete for our attention. So what attention span we have left gets squeezed, and people go unseen who might not otherwise in a less complex society.  So, some of us resort to ever more involved measures to gain notice, even if that notice isn't always positive.  It's a damning statement about who we are allowing ourselves to become.