Older couture houses, like that started by Cristobal Balenciaga, naturally pass to other designers in time. Sometimes those designers walk firmly away from the traditions of the house, and sometimes they decide to pay homage to the work of the founder.  What makes this interesting is how both the newer designer's eye sees the original work, and how the filter of the current day alters what went before.
Every kind of design is affected by the time from which it springs, and looking at two versions of the same creative thought, separated by decades, is a chance to see cultural evolution in action. Nicholas Ghesquiere, who was for a time the designer at Balenciaga  Spent most of his time charting new territory while in the chair there, but now and then would send something down the runway that was a direct nod of appreciation to the man who founded the firm.
Some of these pieces of his are quite direct copies of the original notion, others are further afield, but all manage to make what was designed half a century or more ago, look entirely a part of the now. 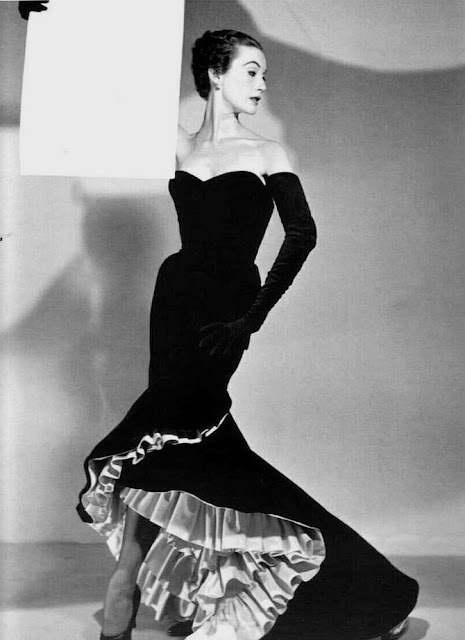 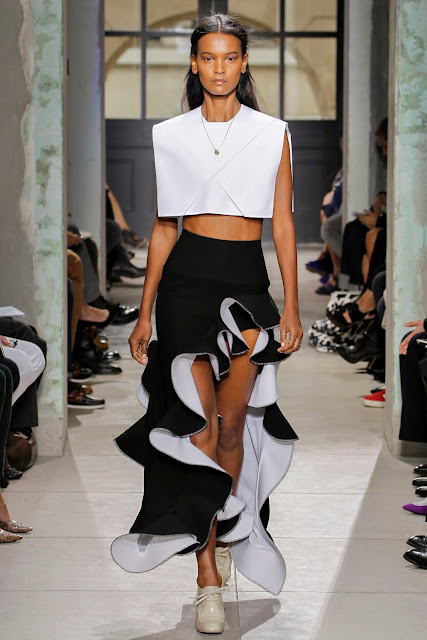 Mary Jane Russel modeling Balenciaga from the 1950s.  The design is one that became iconic, reproduced at all levels of manufacture.  Ghesquiere's version blows the dress to bits, rendering the ruffle in a more random way, and obliterating the formality of the design.  It suddenly speaks to this more casual society. 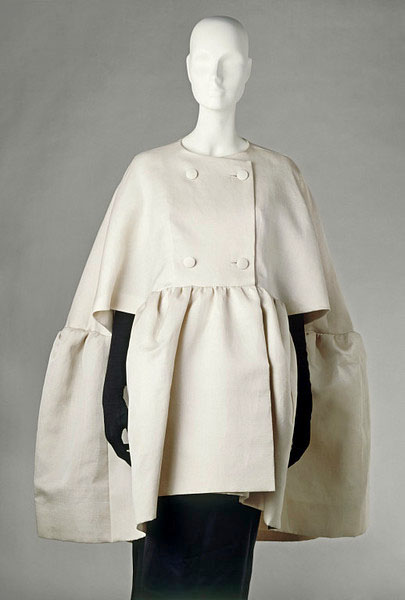 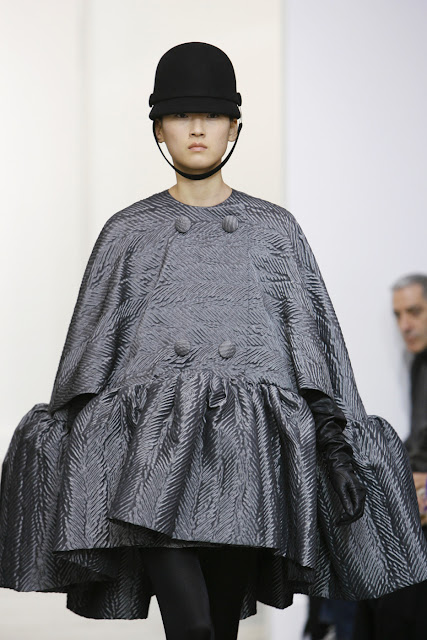 This next effort is from 1961 and was one of Balenciaga's experiments with volume standing away from the body.  The more recent iteration is a direct copy in all but fabrication.  The gray metallic cloque' textile gives it a nearly avant garde edge. which the first design certainly was when it debuted. 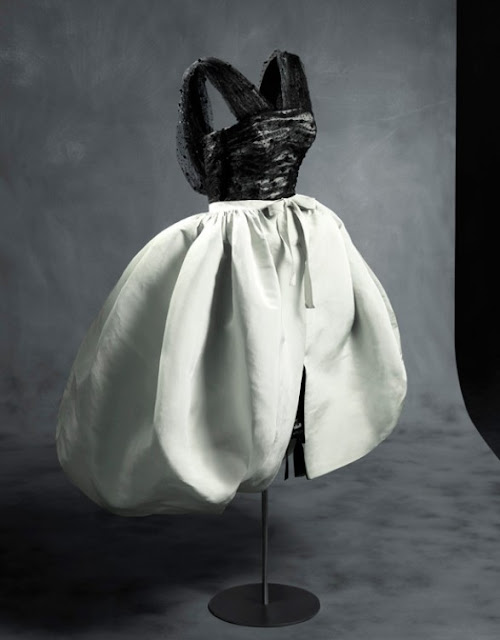 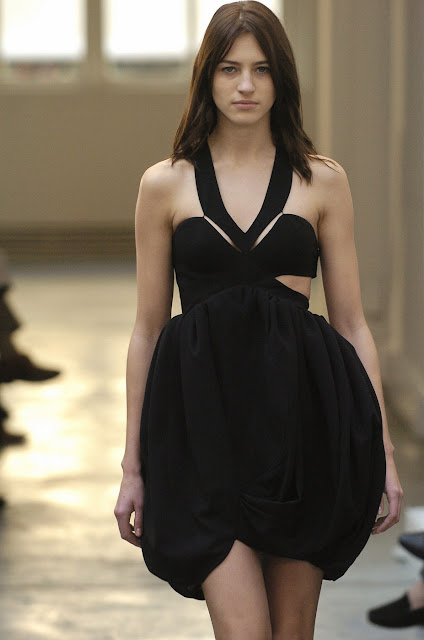 The black and white cocktail dress is from 1959, and is not a look that retains much cultural relevance now. It was a wonderful experiment at the time, but it the concept of cocktail attire has faded away.  So its only appropriate that the updated version by Ghesquiere bears only a ghostly association to the first design. 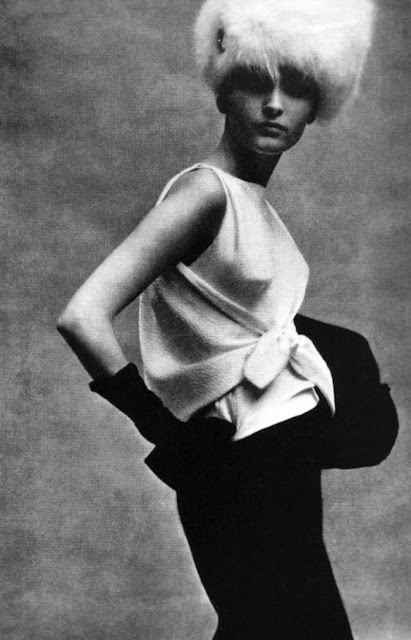 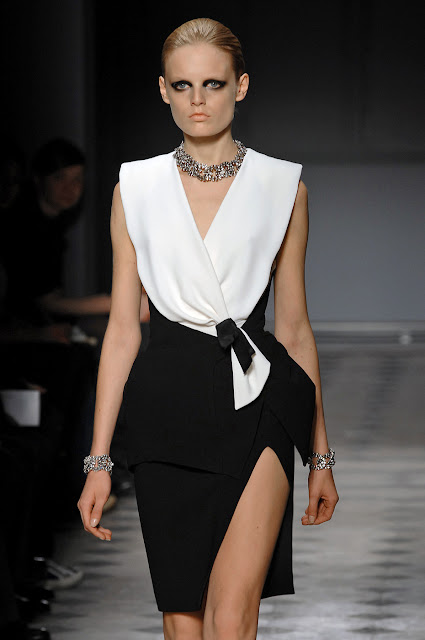 Here, the connection between the two designs is so tenuous as to be nearly invisible, really only the black and white combination, and the waist tie connect them.  Gone is the ladylike formality, mostly because of the pelvis high slice out of the skirt. 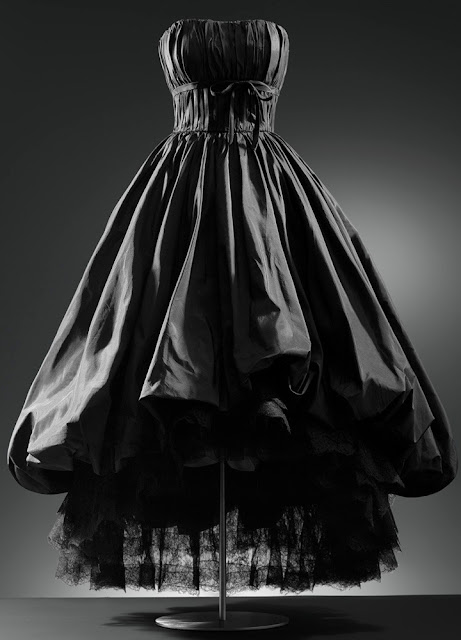 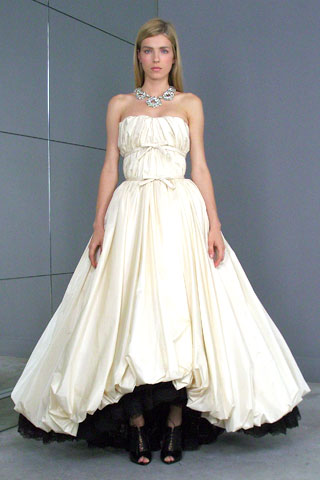 Finally, this black gown with a balloon hem and a fall of lace from it gets a nearly straight across update.  The volume is a trifle bigger, the skirt hem ascends in the front and the color is changed, but somehow those few changes alter the way the dress communicates to us utterly.
It is interesting to me to look at comparatives like these, charting some of the changes in how we see ourselves in the process.  Overall I see a relaxation of rules, with all the positives and negatives that implies.  We have, as a society, left behind us the kind of adult seriousness that pervades Balenciaga's work.  Even when he was being playful, it was still within narrow confines.  The way we live now allows us more opportunity to be playful, in fact its actively encouraged.  Sometimes we take it to extremes, but its there, nonetheless.  And that very playfulness, which can be exuberant, can also manifest as childishness, which is the negative aspect we see around us.
Which designer's work do I like better?  I think Balenciaga is the better architect with textiles, but Ghesquiere has his eye more completely on the time and society.  In the final analysis, I would go with Cristobal Balenciaga, for the sheer purity of his work, and its utterly faultless execution.