Well, well, well.  Here we are again.  It seems there is an endless amount of detritus in my brain that requires regular attention, so, with that in mind, this week's selection of randomness. 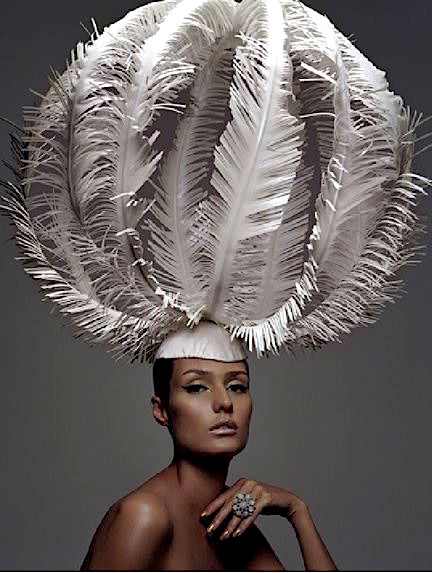 First out of the gate is this remarkable chapeau.  Made of paper, and wire this is a marvelous example of the sculptural nature of hats, but taken to a far place, indeed.  I wish video existed of this in movement. I'm sure the narrow cuts of paper shift and flutter wonderfully as the person walks.  It doesn't matter to me in the slightest that this is absurd. It is beautiful, and the knowledge that its paper only makes it more so, for its fragility.  It also speaks about our desire to render things we see in nature in other forms, taking control of them in a way.  Here, feathers are blown up huge, and turned into an exotic flower.  So two different transformations of natural form, in one. 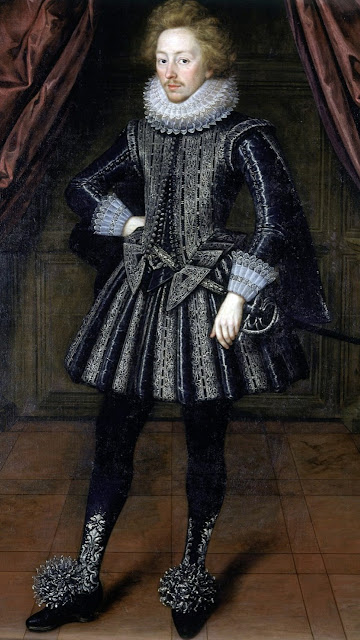 This Dutch portrait from the 17th century is a great display of the height of men's fashion at the time.  This would be roughly 1670.  The codpiece had pretty much disappeared into the folds of the ever bigger breeches.  The doublet waistline is beginning to rise towards the height it would achieve in another few decades.  The ruff collar is expanding in dimension, (and the Dutch will be the creators of its most extreme expressions).  And the shoe rosettes, which will hang around for the better part of a century before being abandoned, in this case are of silver lace, with spangles.  Its a style in transition.  many elements remain from the previous silhouette, but its in mid-morph to the next thing, the free-wheeling, more loosely fitted cavalier looks to come. 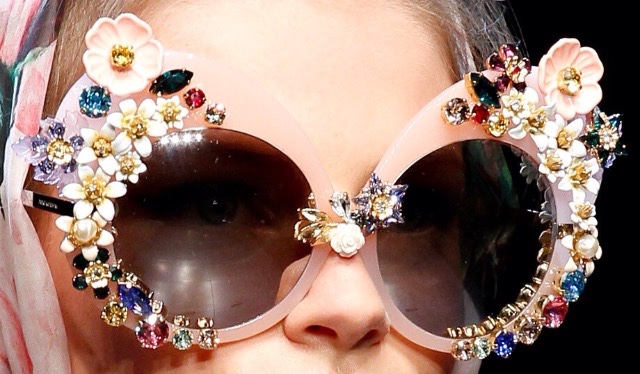 Sunglasses, as an accessory, have always been a place where decorative details have been used.  It makes sense, really, since they sit on the face, over the eyes.  So any details added only draw the attention to oneself more.  This pair is for a runway presentation, so, naturally they are pretty extreme.  But what happens in that extremity is that the person under them begins to fade from importance.  We become more interested in the shades, than in the person beneath them.  So a modicum of caution is a good idea, if you are thinking of sunglasses with extra bits. 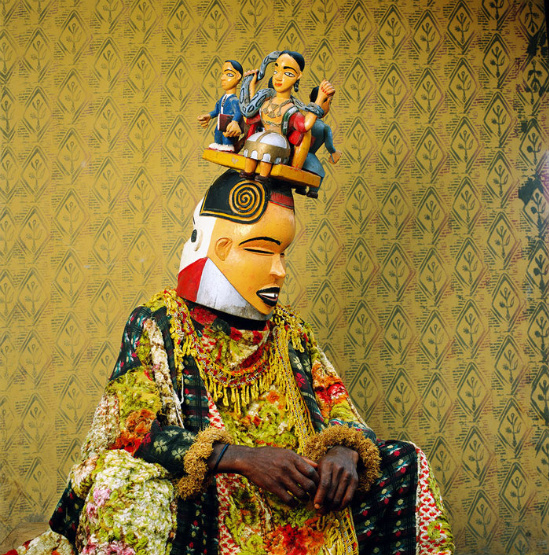 This is a masquerade costume from West Africa.  I just flat out love this.  It has wit, and humor, and manages to also be astonishingly beautiful.  The use of color is wondrous.  The variation of texture also, glorious.  Not knowing anything about the cultural references in play here, I could not speak about that aspect, but even not knowing those things, this is fantastically expressive, and just plain terrific. 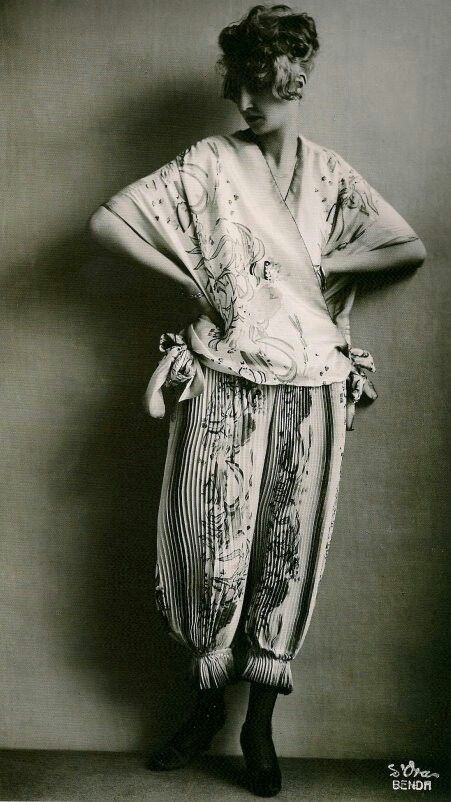 Designers and artists within the Wiener Werkstatte played with apparel design as well as architecture and interior design  This  ensemble is by Eduard Josef Wimmer-Wisgrill, from 1920, and is an experiment with pants for women.  This sort of look didn't take off outside of bedrooms, but it is a rather appealing try.  It manages to be both feminine and forward thinking in its attitude.  I particularly love the densely knife pleated trousers, and where the length could be awkward, the volume of them balances it out.  Overall, an interesting look at changing thoughts about how women dress. 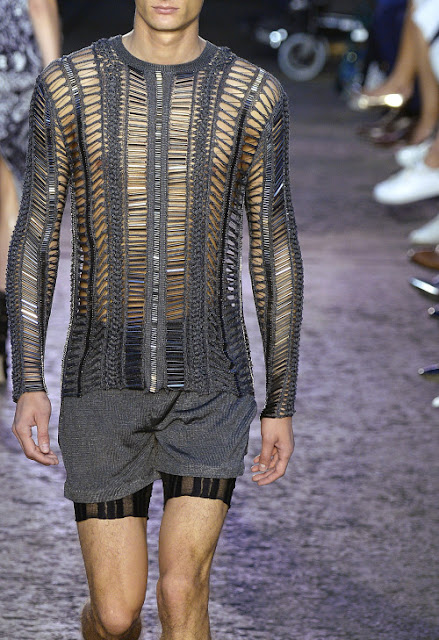 This outfit is be menswear designer Julien Macdonald.  I've written before about the increasing appearance of bead work and other embellishments in menswear collections, signaling a shift in how men are perceived, and how they see themselves.  This effort employs bugle beads in a couple of sizes to actually create the garment structure.  Its a new way for men to appear, and as a concept, incorporating beads into the physical structure, rather than just slapping them on the surface, gives the beads a functional power that they normally do not possess in clothing.  As such, using them as structural elements could make them more appealing to the guys in the room.  They aren't just decoration, they DO something.  If it had been me I would not have chosen knitted shorts for this, a trim cut pair of pants would have been my route. 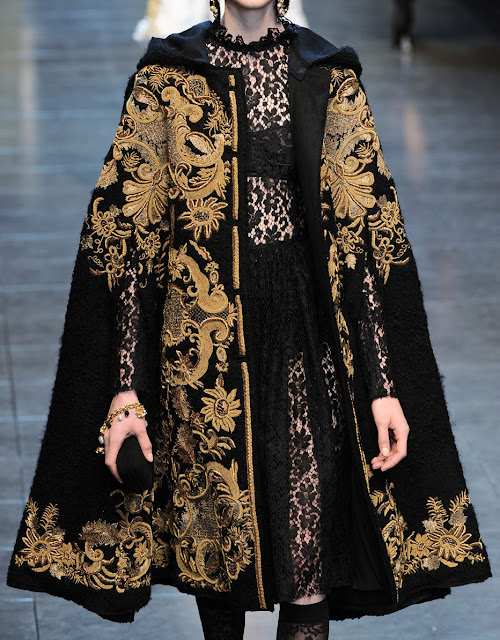 Okay, I will admit it. I love grandeur.  This cape is swoon worthy.  I loathe the lace dress under it, but the cape?  Hell yes.  The thing is, I see this and I don't see this as just women's wear at all.  Us fellas used to rock out capes that were this luxurious, and no one thought the less of us.  Its long past time to do so again.  More glamour, please. 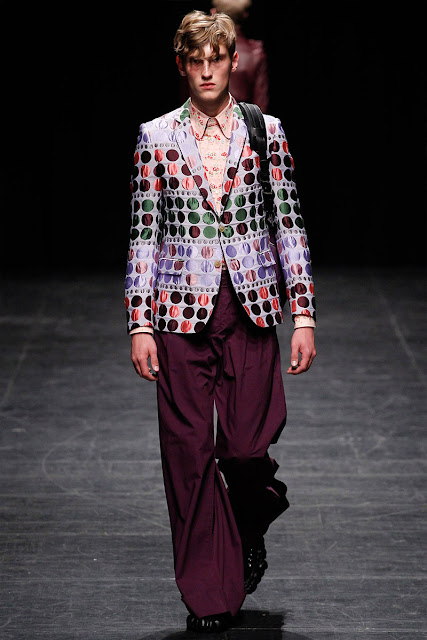 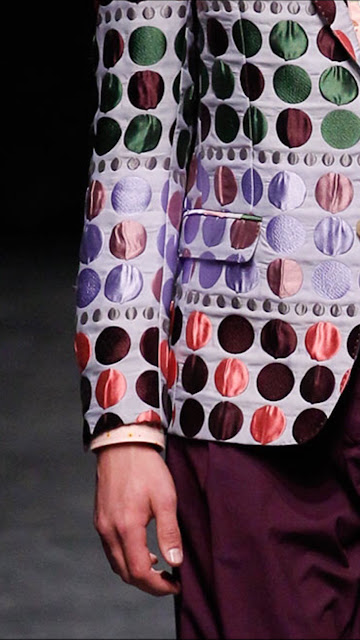 Walter Van Bierendonck is a designer who routinely uses textiles that are on the edge of the possible.  This is one of the more easily digestible efforts from his most recent collection of menswear.   The fabric of the jacket is one that was designed on a computer, using the technology to manipulate the varying textures and colors in the way you see here.  Its a great look at how IT science is working with apparel design to push the boundaries outward.  This fabric with its placement of color, and the changes in texture within some of the raised dots, would have been a  functional impossibility without the use of a computer. 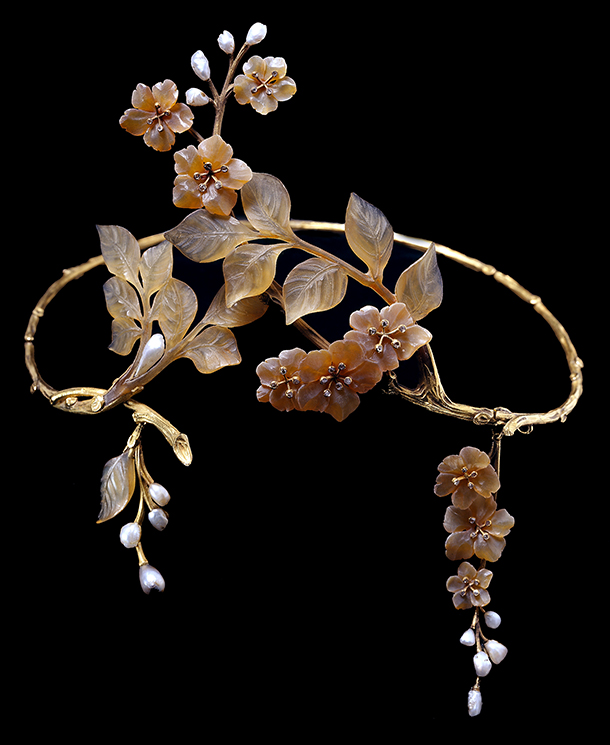 This is the Forget Me Not tiara, and it is part of the V&A collection of jewelry.  It was made in 1905 by French jeweler Paul-Gabriel Llenard.  Its made of gold, with pearls and diamonds. The leaves and blooms are all of hand carved horn.  It is, to me, one of the ultimate expressions of the Art Nouveau aesthetic.  From its shape I wonder if it wasn't meant to be worn back to front; unless it was meant to be worn on upswept hair, otherwise the drops would fall to low and close to the eyes.  Stunning. 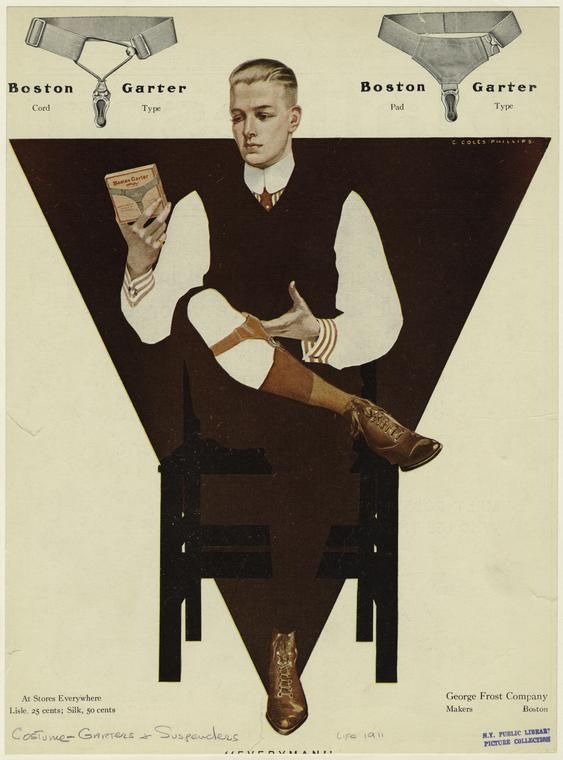 Sock garters.  They used to be an essential accessory for men.  When socks were wool, cotton or silk, and possessed no advanced fibers like lycra to keep them up, garters kept a man's socks from drooping.  They aren't entirely gone, good menswear stores will usually have a style or two, but they have, mostly become an anachronism.  I suspect most guys wouldn't want the bother of them.  But I can tell you, during my kilt wearing days, they would have come in handy. 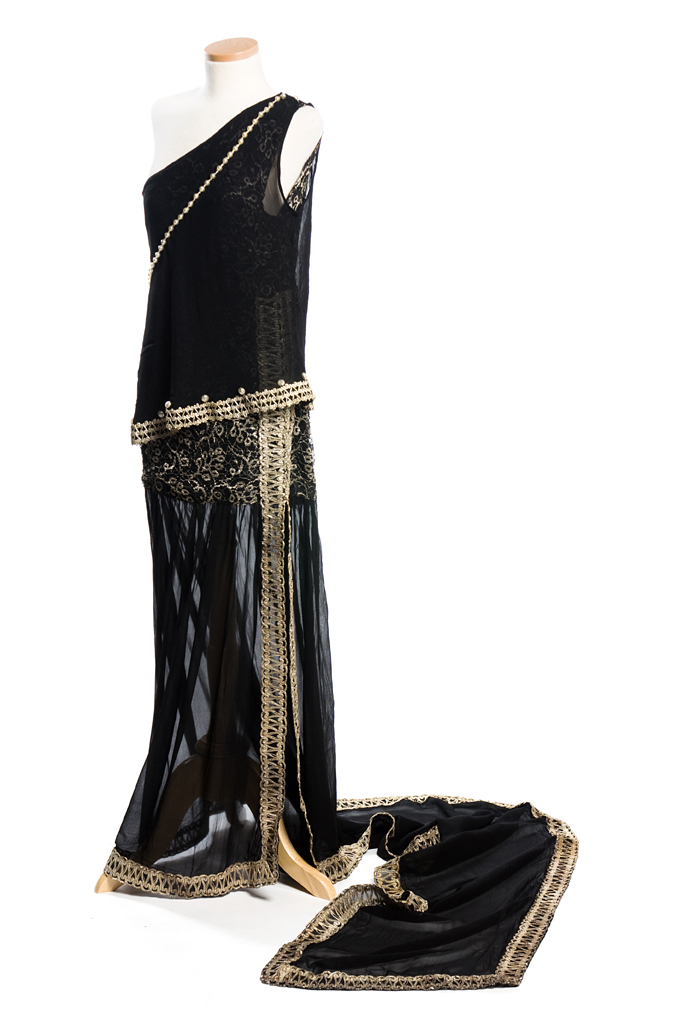 As a finale, here's a piece of serious drama.  1920 again.  Black silk chiffon evening dress with a silver lace bodice and asymmetrical draping.  The dress is also decorated with applied pearls and broad silver braid along the edge of the skirt and the train. This is a dress that, with its asymmetry and long train recalls the style of the previous decade.  It is however completely modern looking for 1920.  The wearer, most likely socialite, Ethel Sanford was a person of great means, and also, great taste. This garment is amazingly lovely.

I hope you've enjoyed this latest romp through my head.  Now go enjoy your weekend!