I just gotta tell ya, trying to narrow it down to just twelve things each week for these Scatter posts ain't easy.  The internet coughs up so many amazing things to me that I have an ever growing cache of stuff to pull from.  So here's this week's sampling of random delights. 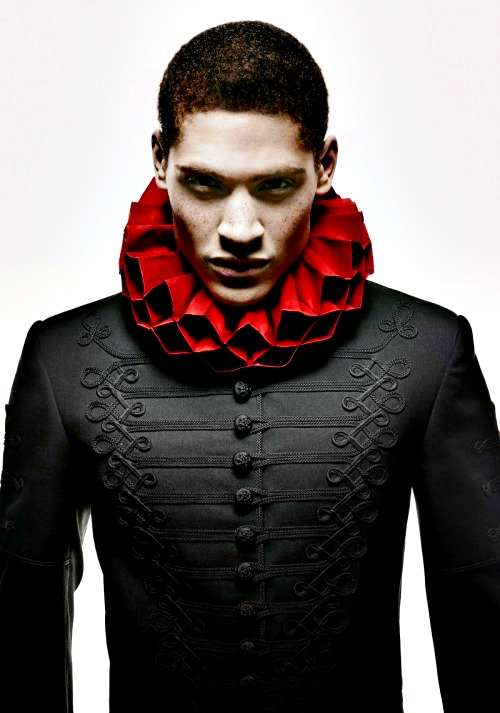 First up this week, Drama given form through intense color, and rigid structure. Sure, this model's glare enhances what we are seeing, but even on its own this is a strong combination.  The militaristic coat, with its body hugging cut is masterfully done.  It implies the elaborate uniforms of the 18th and 19th centuries, but gives it a different expression by making it monochromatic.  The bright crimson ruff, with its sharp folds, rather than undulating pleats, loses whatever sense of frivolity it may have had, becoming menacing.  Of course placing the red around the neck has its own grisly subtext.  All in all this is a combination full of subliminals.  And if you think its all about the model's face, put your fingers over it, and look again.  Its a potent image. 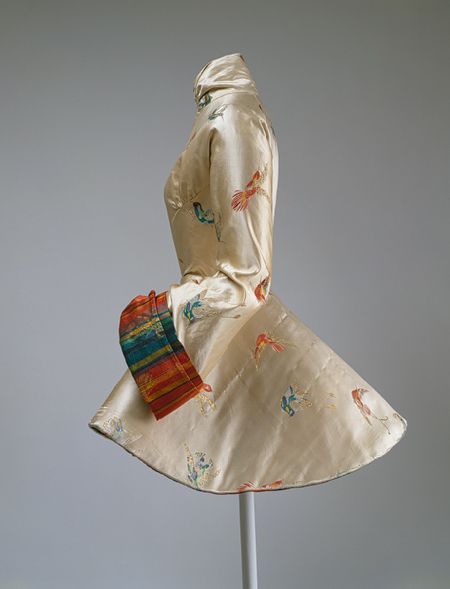 This delicious raw silk evening coat is by Madame Gres and its from 1935.  Its shape is meant to recall the lady's coats of the later 18th century.  But the colorful woven birds in the textile brings it into the 20th century completely.  It would have been interesting to see worn over one of the body skimming bias dresses that dominated evening wear during that time.  I suspect the deep peplum would have accentuated both the narrowness of waistline, and the narrowness of the leg line below. Sweet. 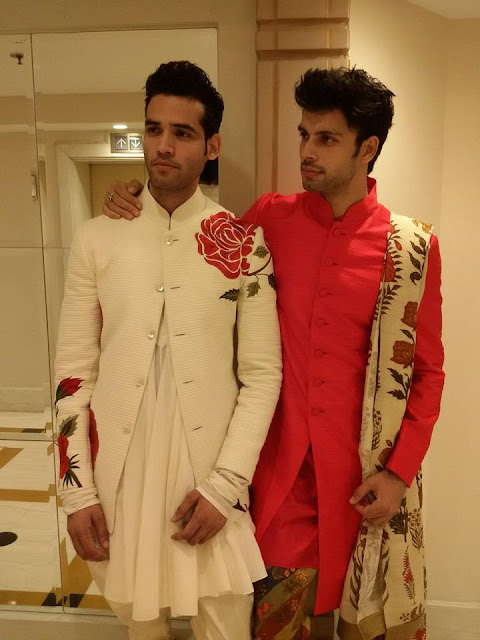 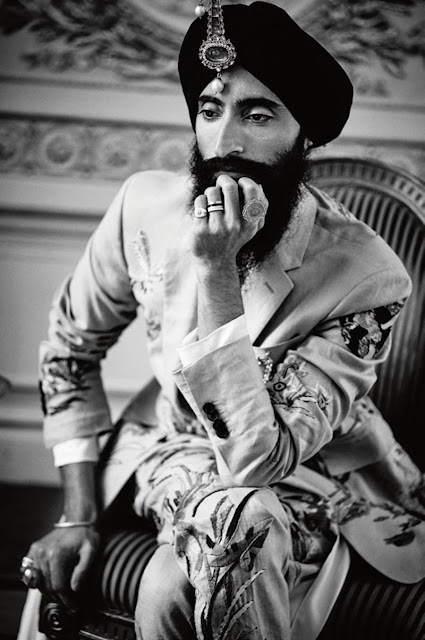 This is a style of menswear I would love to see hop the ocean, and start showing up on guys in the US.  I would wear this sort of thing in a hot second.  First of all the coat style is really flattering to many people.  Secondly, the use of decoration can be greater or lesser depending on taste, and the range of potential expression coming form the details is nearly limitless.  Yes, please!  And well, Indian men. Nuff said. 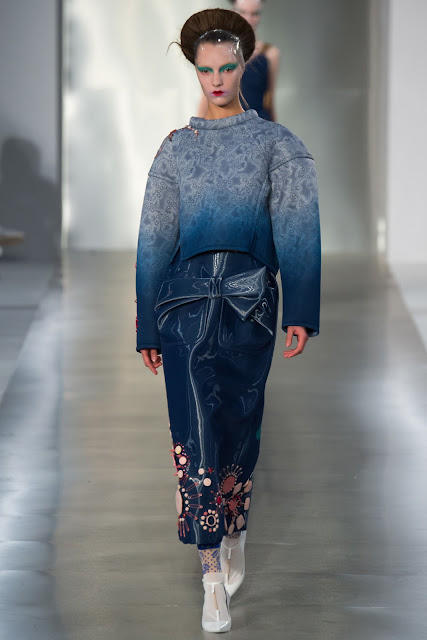 John Galliano is one off the most consistently inventive designers currently working.  This effort is from the most recent collection he did for Maison Margiela.  Leaving aside the crazy runway styling with the clear plastic headband, the cropped top and the skirt are amazing pieces.  The shape of the cropped top is quite interesting and the ombre' effect only adds to that.  And the skirt?  That textile is awesome to behold, and clearly something that didn't exist at all till recently.  I love that the illusion of a bow has been created by artful draping and cutting.  And the embroideries on the hem give the whole ensemble a slightly playful feel, where it could have gone deadly serious. 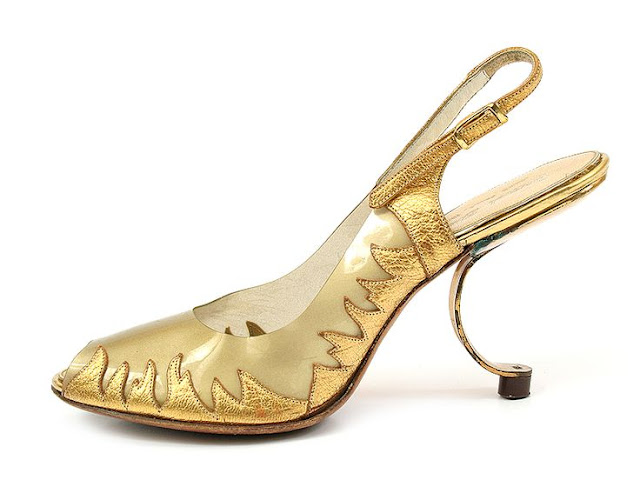 Two of the major accessories we wear have the potential for  tremendous creative variation.  One is hats, and the other, shoes.  These two examples are both from the 1950s, and both express their connection to newer technology.  One has a heel with a inward curving spike, that would have been impossible before the development of certain  high tensile steels. That shoe also has a body made of vinyl, which was at the time making its way into homes and work places with greater frequency.  The other shoe, of gold kid, is not technologically advanced, but speaks to the mid century craze for all things space aged by the use of the starburst of rhinestones of the spiraling toes. 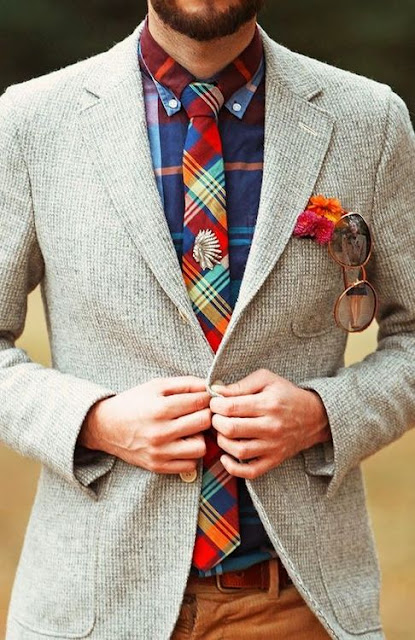 This combination could've gone straight to Clowntown.  But the wise decision to pair the brilliance of the shirt, tie, and trousers with a sedate jacket creates a visual balance, and the eye avoids being overwhelmed by dazzling pattern.  Now, would I like to see a whole lot more color in menswear?  Oh I certainly would.  Why deny yourself the whole spectrum, hiding in a dismal corner of varying grays?  Just because someone is a conservative dresser, doesn't mean that all color needs to be banished.  Even one small vibrant accessory can change things up, and bring smiles around you. 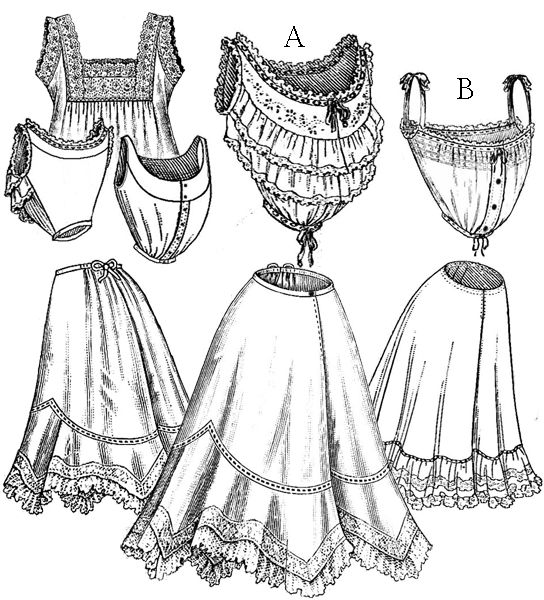 These days, lingerie still uses a lot of the same techniques of construction that were employed in the Victorian era. In fact, our modern notion of frilly underthings comes directly from that period. But, where now most women choose less complexly made things for everyday wear, when lingerie was just starting out it was quite complex and required the most elevated of skills to make up successfully.  These examples are actually fairly tame ones, being designed for the new ready to wear market, at the mid price point level.  But petticoats and corset covers were often lavishly adorned with lace insertions, pin tucks, ruffles, pleating and ruching, and all in incredibly fine, light weight cottons and silks. 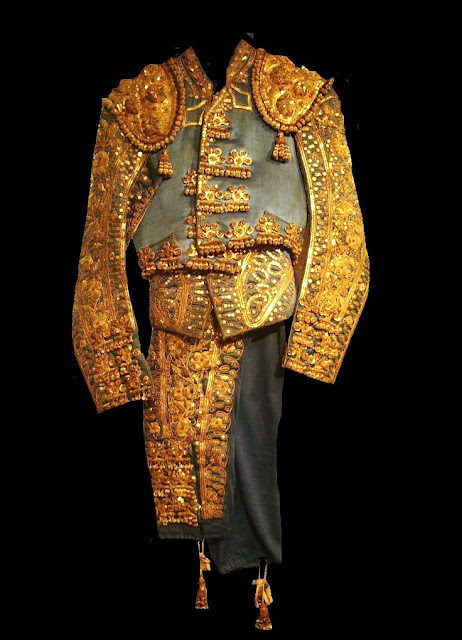 I haven't posted a suit of lights in quite a while.  But this one resurfaced from my files and I had to.  This is a 19th century example of the form.  The firm and restrictive seeming structure of the suit, with its close cut bolero jacket and snug fitting pants, actually allowed the wearer great freedom of motion.  The densely packed embroideries of gold metal strip, sequins and silk floss must have been impossible to ignore in the bright Spanish sunshine. I've always thought that the Traje de Luces was one of the ultimate expressions of the peacock male.  Though I am not sad that bull fighting is no more, I am sad that this form of dress is now relegated to the history pile. 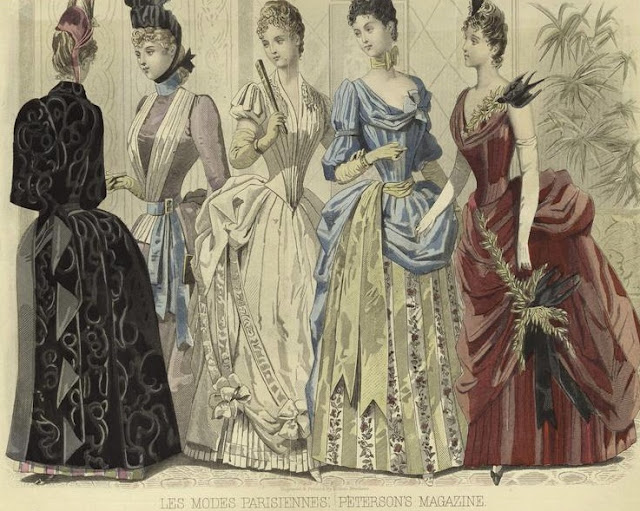 Peterson's Magazine-1889.  Reception dresses.  What the heck is a reception dress, anyhow?  It was a gown meant for use at formal events that did not include dinner or dancing.  Rather narrowly precise, no?  In form, reception dress was virtually indistinguishable from ball dress, or theater dress.  The only real difference was the depth of acceptable plunge in front. A ball dress or theater dress was allowed to be more daring in that regard.  And in a curious thing that was a regular part of fashion illustration at the time, the two ladies on the left are dressed, not for reception, but for visiting or other outdoor activity.  The convention was that it really didn't matter that the clothes presented were for different times of day, and different pursuits.  And it is unwise to think that all women understood the nuances of correct dress. The rules and regs were so complex, and changed so often that endless numbers of books and periodicals routinely advised women about what was okay to where when. 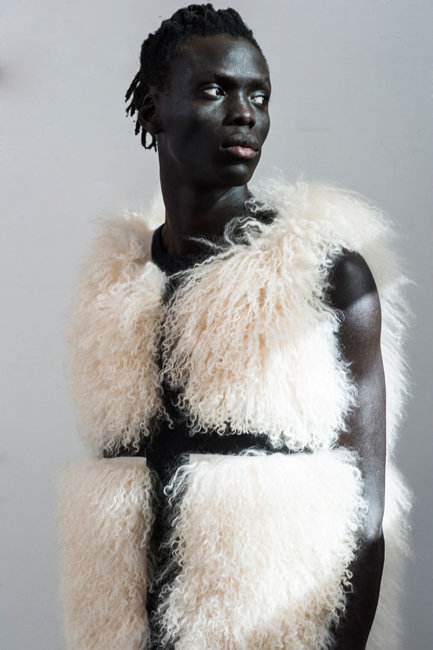 Texture, volume, structure.  The intersection of these three creates a compelling garment. No, its not for everyone, maybe not for anyone besides this amazing looking person, but I love it when a single this is almost literally everything. 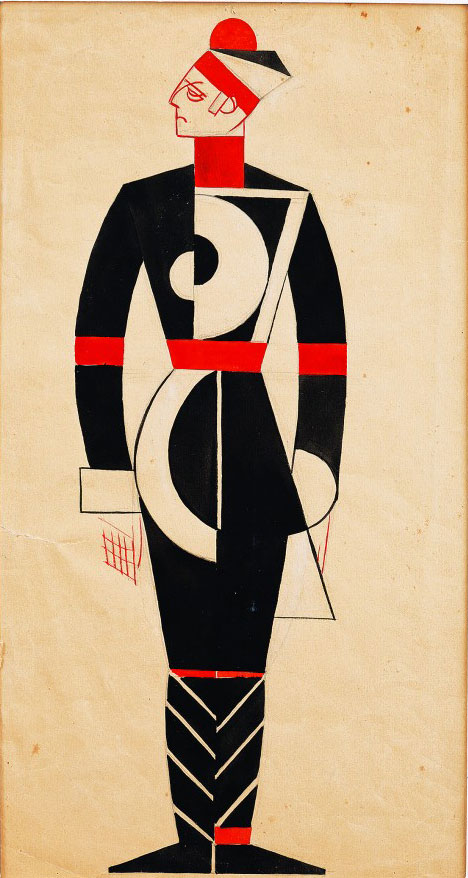 Vadym Meller, Russian born painter and designer worked up this costume design for the Berezil Artistic Association in 1923.  He worked in the cubist, constructivist and expressionist forms, and was also an architect.  He contributed work to the Paris Art Deco exhibition, and did considerable design work for theater.  This design is an example of his cubist work. A good deal of experimental theater during the 20s was mounted using design work of this type. It was much more about imposing pure form onto the body, than it was about making the form integral to the body's motion and needs.  As such, it did not last long as a useful theatrical tool, since it tended to inhibit the actors or dancers, rather than enhancing their performances. 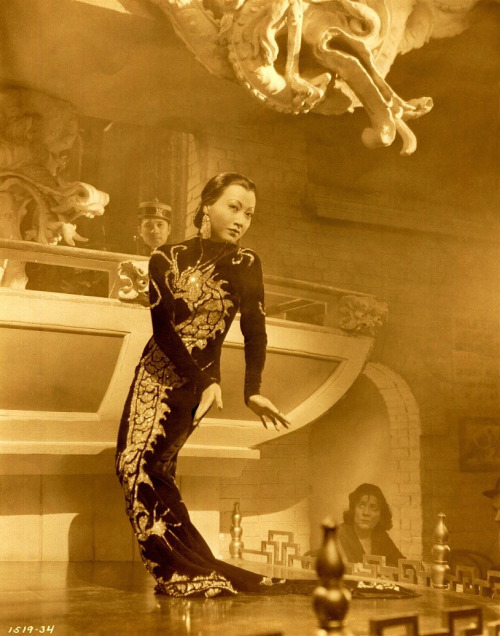 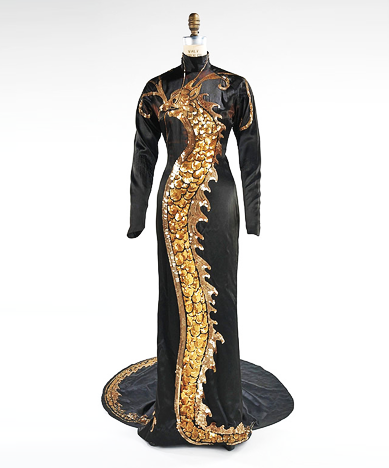 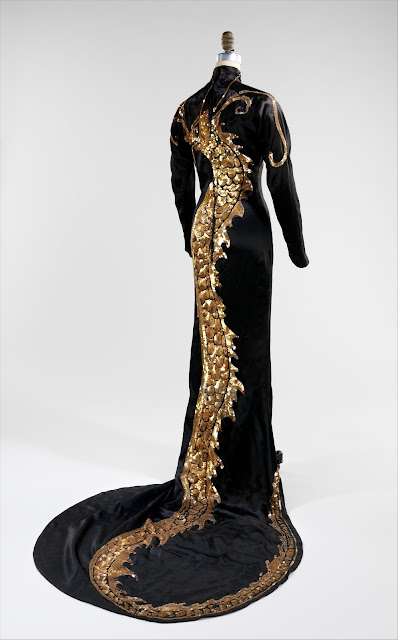 Finally today, Paramount film costumer Travis Banton designed this take on the cheongsam for the film Limehouse Blues with Anna Mae Wong.  The dress is black satin entirely embellished in gold sequins with a vast dragon.  As a piece of film costume its amazing, and stands as an iconic piece from the classic era.  Its a great example, too, of how a single design element can do the entirety of the job of creating, and supporting the message to be delivered. In this case the message being trumpeted is that of a woman who is dangerously predatory, and unpredictable. Stunning work.

So that's the lot for this week!  Have a great weekend and go have some fun!
Posted by Paul G. Ellis at 5:12 AM