Scattertime again.  I look forward to doing these posts. Its fun to assemble them and create the order.  And I always find out new things myself during my research.  So with that said, here we go into this week's edition! 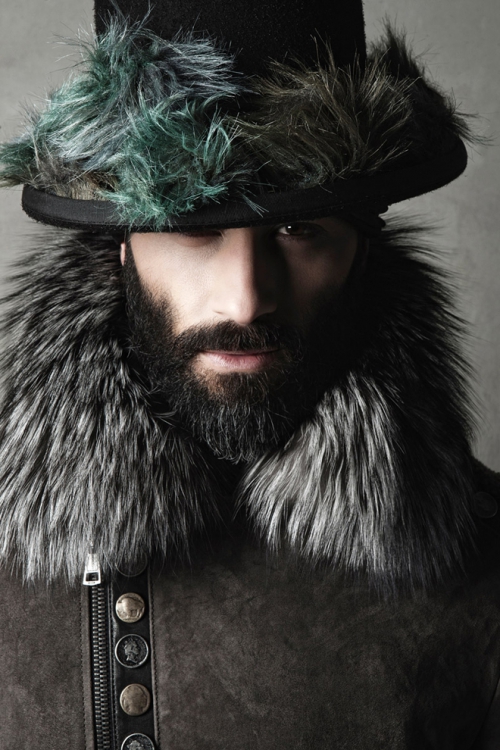 Sasha, would you mind stepping into the camera frame?  Thank you.  This is model Sasha Martini, dressed in a Tom Rebl coat and hat.  He's here for two reasons.  The first is that I think he is dreamy. There, I've got that out of the way.  The main reason however is about the increasing use, and importance of fake fur.  Designers are always on the lookout for new textures. Fake furs add drama, and sometimes a sense of luxe to a garment, altering its finalized meaning.  And when, like in the hat, the fake fur is obviously, intentionally fake, there is a sly wink as well, that appeals to our currently irony obsessed culture.  We may like to tell ourselves that we are becoming more egalitarian, but we still love that boost that makes us look a bit more affluent.  The coat, without the fur collar would still be sharp, but with it it becomes something with a rather Russian vibe, and gathers a layer of romanticism. 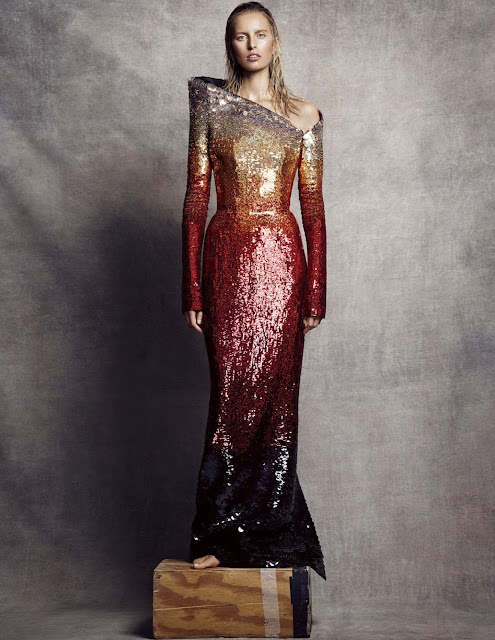 Jean Paul Gaultier.  There are a few things here I find interesting.  One is the manner in which the ombre' effect is achieved.  Unlike most, it doesn't just cycle through gradations of a single color, but transitions from black through to silvery white, with warm tones between.   But that alone would not make this dress interesting.  What makes this garment have a really special feel to it is that neckline with its sharply up-jutting angle.  It takes a shape and technique that could seem old hat and makes it look nearly space age.   Finally, this sort of sequin work is just a moment away from being reproducible by robotics.  But at the moment, this is still the work of skilled hands. 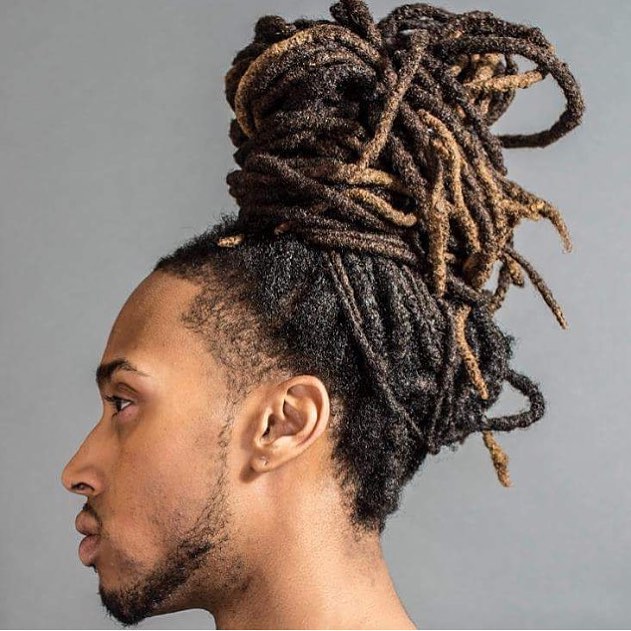 I'm one of those people who seems to discover beauty where others might bypass it.  When I saw this image I was struck by the intricate sculpture created when this gentleman lifted his dreads and twisted them as he did.   And connected to that is the understanding that it will never be precisely the the same ever again.  This combinations of shapes and loops will never reoccur.  It reminds me that our hair has remarkable qualities of expressiveness, and that this fellow, with his lavish dreadlocks, could make a huge range of visual statements by manipulating them in differing ways. 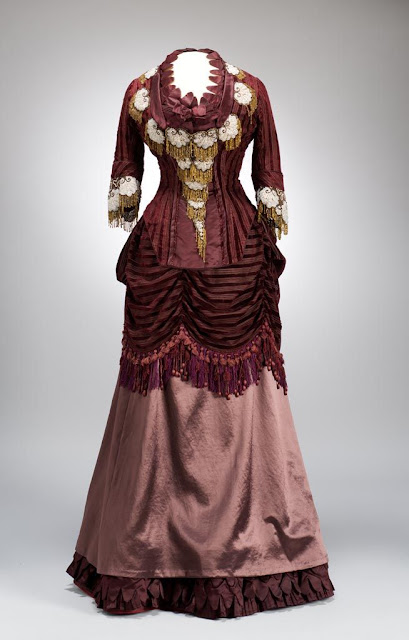 This dinner dress is from about 1875 and its a great example of middle class dress.  Its a great example for two reasons.  The first is that it employs ready made decorative details like the passementerie and fringe on the apron, and the ready made beaded appliques loaded onto the bodice.  The other reason its of note is that the design shows a certain clumsiness.  Part of this can be attributed to the dressmaker, whether it was the lady herself, or more likely, someone employed to do the work.  If it was a professional dressmaker, then she was working under orders, and the odd proportions, misplaced and over done appliques, and somewhat shoddy workmanship are a shared responsibility.  But this is the sort of thing that a lady who wished to be seen as au courant, and cultivated, but who lacked some of the requisite education, would have seen as effective. 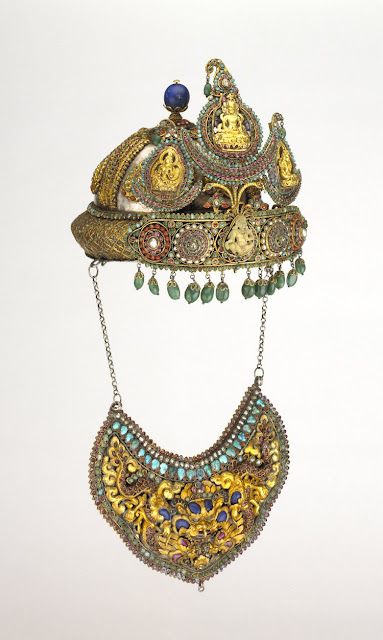 This is a ceremonial crown from Nepal, made in the early 1800s.  I love the complexity of it, and that even so, the design remains somehow, serene, even though its rampantly decorated.  I also love that the pectoral is connected to the crown.  And then there is my old saw about being dazzled by the breadth of human creativity and skill.  This is a masterwork of jewelry craft, and an object that, as a species, we can point to with pride in our accomplishments.

We like to make fun of the 70s, declaiming that it was a taste free decade, but it simple ain't so.  This coat is by designer Stephen Burrows, (one of the first African American designers to rise to prominence in the United States), is an exuberant and delightful design.  The vivid colors are well balanced, and the confined structure allows all of them to work to maximum positive effect.  I daresay some fashionista of the 21st century could rock it out in this coat.  Its also of note because the spare lines of the coat with its obvious zipper, is inspired by the 60s, but the shocking brilliance of color is looking forward to the 80s. 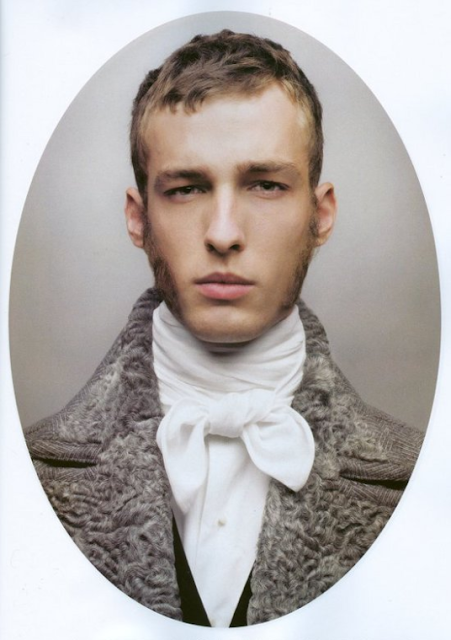 For many, the concept of dandyism is about elaboration, and excessive detail.  Certainly there is an aspect of that with the notion.  But the far greater part of dandyism is about precision.  The artfulness of positioning the cravat just so.  The effort required to make sure that everything fits to perfection.  The time needed to arrange the hair correctly, and married to an overarching desire to create a coherent whole.  That is the center point of being a dandy. 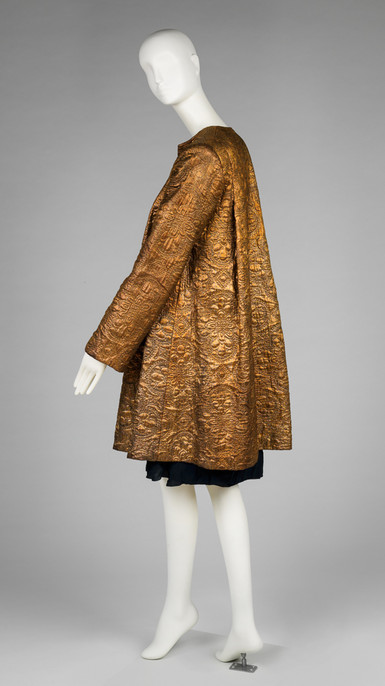 I'm slipping some coat porn in here for your delectation.  This is a piece from the 1930s, though it could play well in any time at all.  The simple cut of the copper metallic mattelasse' coat allows the glorious fabric to sing.  I wish I could tell you who the designer or maker was, but sadly, not attirbution came up when I searched.  I would love to get my hands on some of that fabric. it looks amazing.  Mattelasse' was developed to ape the hand quilted textiles of the 18th century.  It can be achieved by quilting, or by weaving, using a jacquard loom, and it achieves a densely woven textile that has the look of being meticulously hand quilted.  That this coat is metallic copper matelasse' only makes it more fabulous. 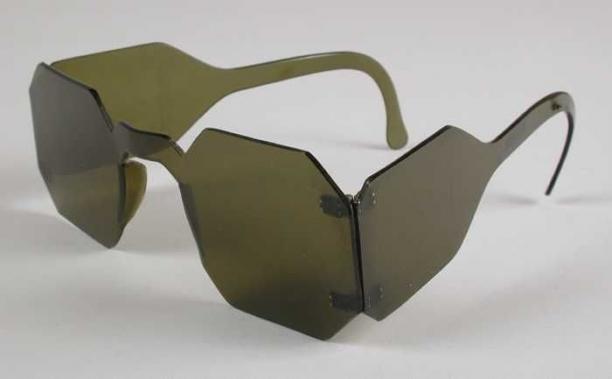 Wanna take a guess when these were made?  These sunglasses are from the Netherlands, and were made in 1930.  We sometimes forget just how avant garde design was at the time, but these would be edgy and modern feeling right now.  The push during the 1920s and 30s to make everything "modern", to drop anything that smacked of the antique extended itself into every aspect of design, no less in the Attire world than anywhere else.  New materials like the plastic used for these, were constantly being toyed with in apparel design.  Elsa Schiaparelli, for example played with cellophane, making evening coats and over-dresses out of it. 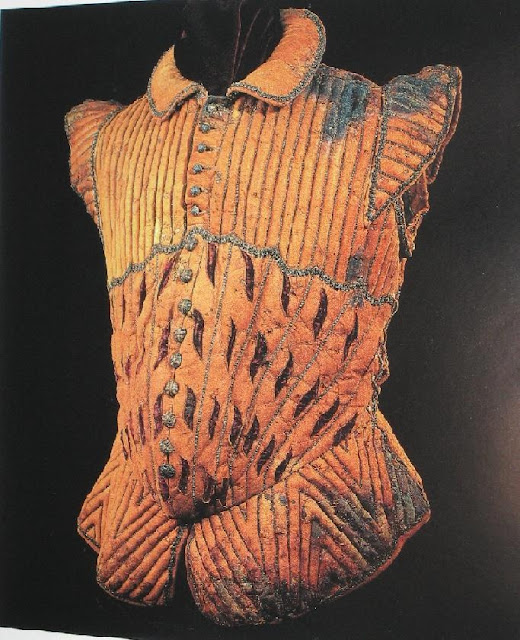 This must have been for the dead of winter or it was meant for fencing or some other combat training, because its not only padded heavily, its made of doe skin leather.  Its less likely that it was meant for sword practice, since its also decorated with silver braid and buttons, which would have been overkill for a practice doublet.  Its interesting to note that it has the fashionable, and distinctly odd peascod belly front to the doublet. At its most extreme, the peascod formed a sharp ridge going down the center front, and not only jutted out but actually arced back under itself.  Definitely one of the more peculiar men's fashion trends ever. 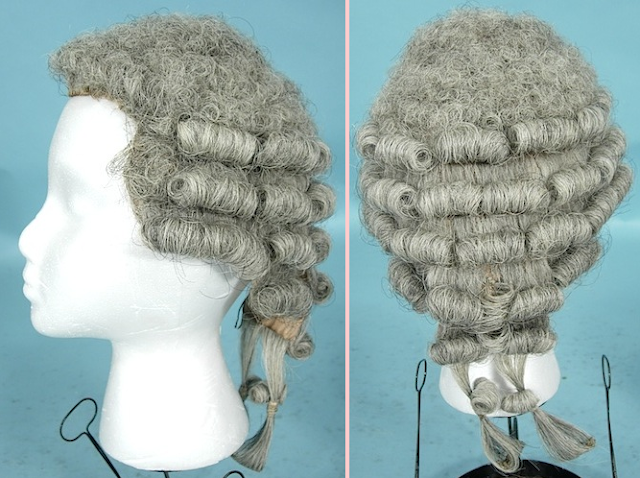 This is a layer's wig, made of horsehair.  It was created in New Zealand in the late 1700s, when wigs were still commonplace, but were close to going out of fashion.  In fact the lawyer's wig was to become the only version of the form to make it into the 21st century.  During the 19th and the earliest part of the 20th century, liveried servants sometimes were required to wear them by their employers.  Its great to be able to see this closely, since it gives us a real look at how these wigs actually looked. There wasn't much attempt, really to make it look like one's real hair; the line of demarcation at the forehead being far too pronounced for that.  Interesting too, that where such wigs had been a article of fashion, conferring status, they became first an article of ceremony, and also, in the case of servants, an emblem of subservience. 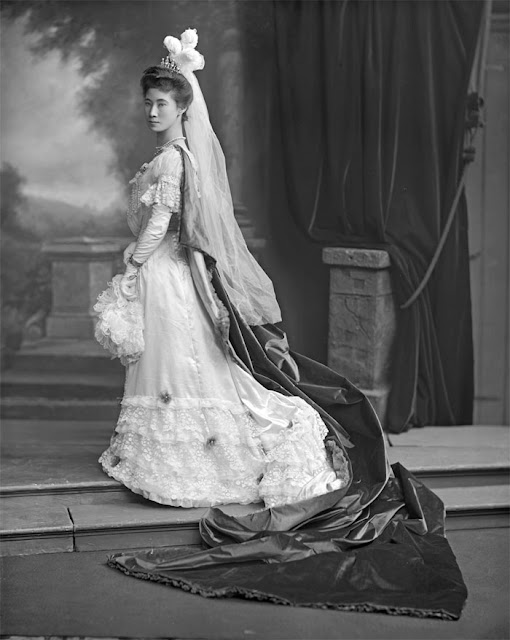 This is Viscountess Hayashi,  (born Misao Gamo).   Her husband Hayashi Tadasu, was the first Japanese Ambassador to the Court of St James.  Here she is in full court presentation regalia, for a court she attended on March 14, 1902, where she was presented to King Edward VII, and Queen Alexandra by the Marchioness of Lansdowne.  Clearly, she had made sure to observe all the rules, since her costume is perfect in every tiny detail to what was required for full court presentation.  Part of the reason for her presentation was her husband's successful completion of negotiations for trade between England and Japan.  No doubt every eye in the room was on her, for all sorts of reasons.

And that, dear friends is the lot for this week.  More to come, of course. Now, go have fun!
Posted by Paul G. Ellis at 6:35 AM