I never used to believe all that stuff about how time appears to go more quickly as we age.  I really hate it that that were right. So We find ourselves, quite instantly it seems right back at Saturday, and that means it's time for the Scatter.

So here it is, this week's gathering of oddments and ephemera. 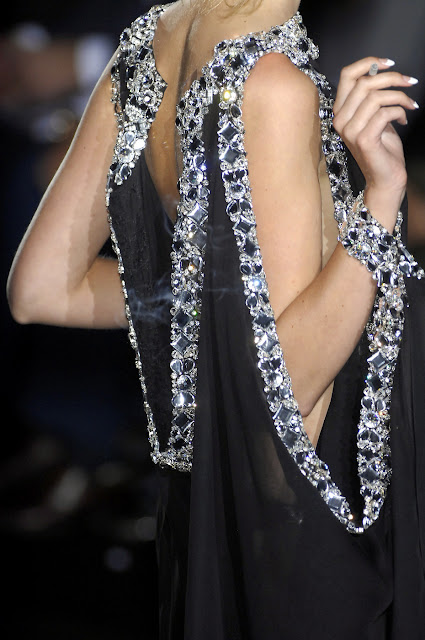 I found this detail image of a DSquared2 design from 2008.  It was an arresting image, and I started wondering why I was so taken with it. There is a simple grace to the way the garment drapes, that is at once both elegant, and sexy, without being vulgar.  The placement of the band of jeweled embroidery along the outer edges is a decorative location that may have been one of the first we ever attempted. The result here is a garment that suggests much, but reveals little, which is the essence of seduction.  I may not be a heterosexual, but I would certainly want to know who this person is. 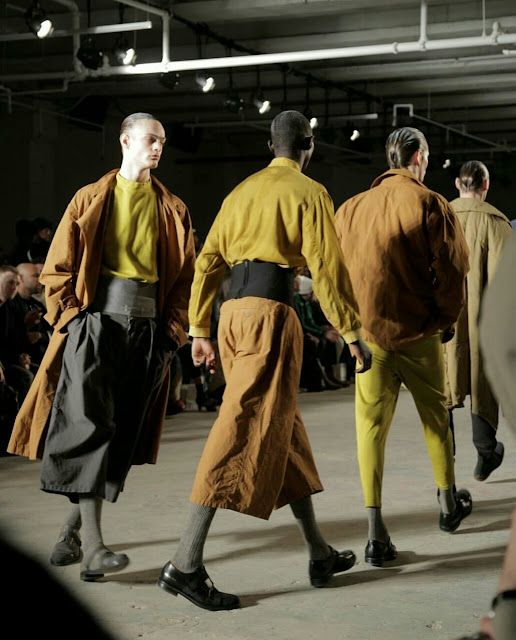 The push towards change continues.  And I continue to champion it. This image is from a very recent Robert Geller collection of menswear.  What I find interesting here is that not only is the push present to create new Attire words for men, but to do so by combining colors that have not typically been in the man clothes lookbook.  The acidy yellow, that is almost chartreuse, brings this further along that it might otherwise travel.  Also, it is wise that there are both fully understandable pieces, like the coats, paired with items that are more challenging.  This diminishes the edge of the less commonplace pieces, and raises the impact of the more well known things.  I can easily see those mid calf shorts catching on.  More words in the menswear part of Attire, please. 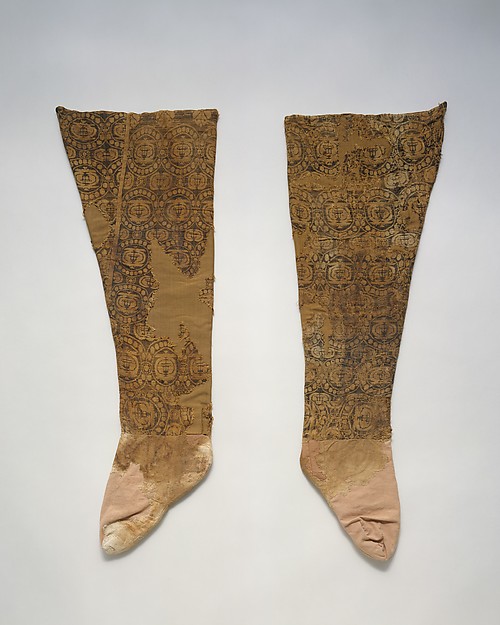 This is a pair of leggings from the early 1700s.  Such leggings would have been worn under a woman's skirt, especially during the winter months to help stay warm.  These are made from what was obviously scraps of something else.  The pattern of the textile is significantly pre-18th century. We can also clearly see on the left hand one, that the material has been pieced, with no attempt to match the pattern, which implies that either the maker didn't care if it matched, or it wasn't possible to do so with what was to hand.  The other reason I'm putting this here is to show some of the patient work of the conservators out there.  Part of the both feet, and areas of the patterned textile of the body of the leggings have been meticulously replaced and backed with solid color material that allows us to see the complete shape and function of these articles.  Having done a bit of conservation work in my time, I know just how much patience, care, and attention to the work is required. 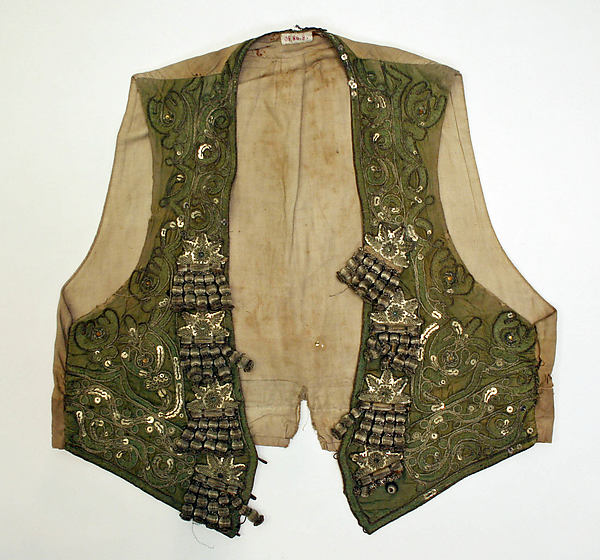 This waistcoat is from 1800 and comes to us from Spain.  What is interesting to me about this is the divergence that occurred and still occurs to a lesser degree from culture to culture away from whatever the prevailing mode may be.  The cut of this waistcoat is exactly correct for 1800. It is in the manner of its decoration that it veers quite a distance away from what was done elsewhere.  The manner of the embellishment is entirely Spanish in its derivation, even pulling the silk wrapped ball fringe pieces traditional to bull fight costume into play.  It is interesting to see that, unlike France, which had just dealt with a revolution that axed so much of its aristocracy, and encouraged a far simpler manner of dress to grow, Spain was still playing around with spangles and paste stones on their clothes. 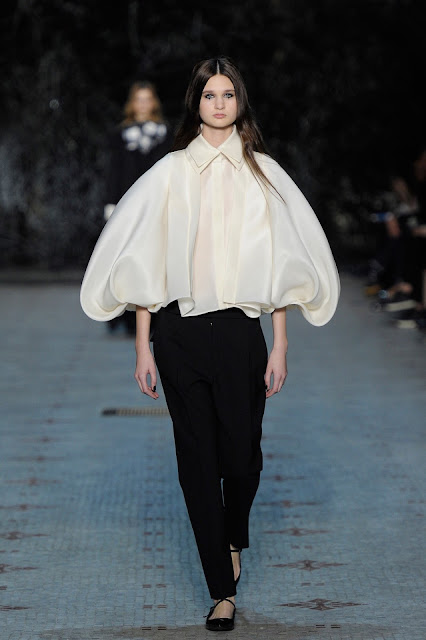 I really do love how the manipulation of something flat, like a piece of material can, in the hands of skilled creators, become something entirely unexpected.  From that flat object this amazing piece of mobile sculpture is built.  I am sure that seeing this in motion would make it even more appealing.  The way the silk fabric, (which must have a substantial hand to be able to shape as it does) arcs out away from the body is really quite beautiful.  Nope, not real world beautiful, but lovely in a poetic, and unreal way.  Dice Kayek, Spring/Summer 2016. 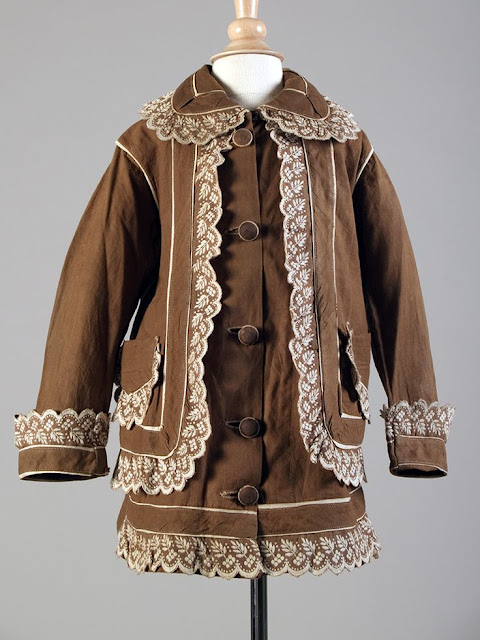 It's charming, isn't it?  It's also for a small boy.  This boy's dress is from 1896, and was made in the USA, probably by loving hands at home.  The reason I say that is because of the assembly quality.  When you really look at this there are telltales that add up to the likelihood of this having been made by the child's mother.  A professional dressmaker would have taken greater pains to make sure that, for example, the trim on the cuffs met precisely at the seam, or that the buttons would be spaced evenly.  This piece is interesting too in that it uses some of the early machine embroidered trimming that had become available.  Repeating patterns like this one could be bought by the yard at millinery and department stores.  Mother then only had to find a matching material, which she did, and then she could make up an outfit that looked quite expensive.  This is pretty much the last gasp for these boy dresses.  Within only a decade they would be entirely gone, replaced by small suits with knickers, or shorts. 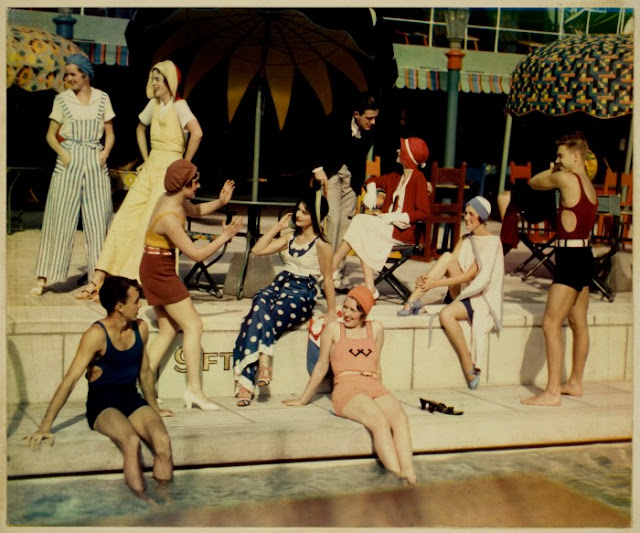 The Ladies Home Journal, 1932.  This beach and resort wear layout seems charmingly innocent to us coming from our jaded, overly sexed out place in the 21st century.  But this is significant for a number of reasons.  One, it gives us a look at what the boys wore at the beach.  It wasn't really until the 1940s that topless swim costumes became the norm for men.  And looking at the ladies apparel we see that for the first and only time, really women's and men's bathing suits are essentially the same amount of body coverage.  After this it diverges again and will never be the same.  And of course, heels at poolside. 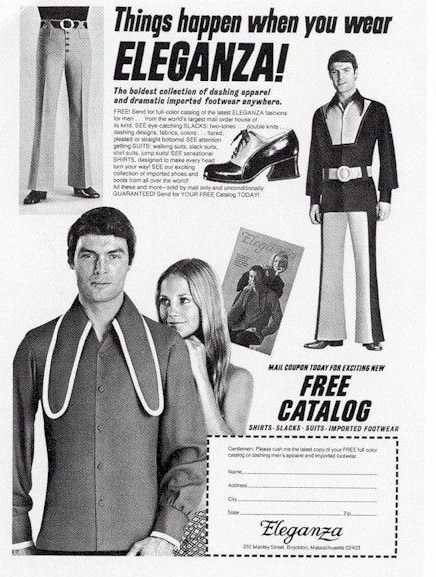 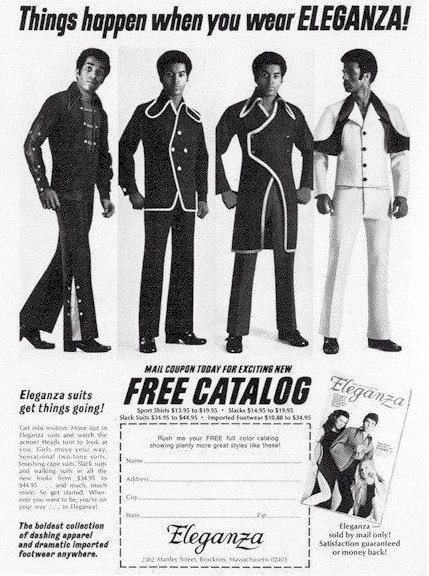 I will say this only once. I never want to see this happen again.  I lived through the 70s as a young man.  And though these Eleganza looks are mighty extreme, they really did exist.  Now, what do these things say culturally?  Good question. Certainly it was an attempt, (largely a failure) to break the mold of menswear traditions and broaden the scope for the guys in the room.  It was also an expression of the new sexual freedom, though it might not look that way to us.  The clothing here is meant to be more overtly sexy, more consciously so than before.  Obviously, with a tag line like "Things happen when you wear Eleganza" the intent is seduction. 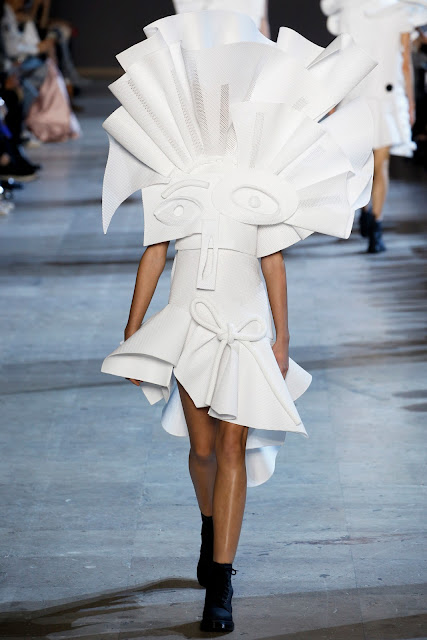 I sometimes just have to sit back and smile when I see a really aggressively Avant Garde ensemble appear.  This is part of the most recent Viktor & Rolf collection.  The model is turned into a piece of cubist inspired art.  I have nothing profound to say here besides my happiness that such experiments happen, and that later on, some tiny fragment of this might make its way to the real world. 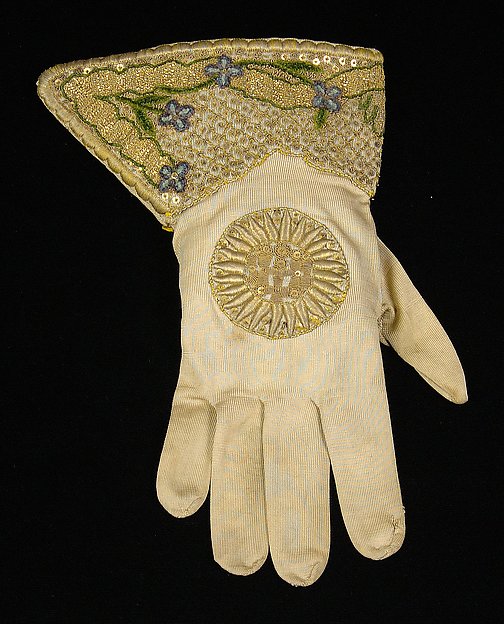 By the early 1700s, when these gloves were made, such elaborate gloves were not so much a fashion.  This is a Bishop's glove, and as such it is meant more for its ritual significance than as just a lavish adornment.  Gloves of this sort were intended to relay the message that the wealth of the wearer really belonged to God, (regardless of the fact that this was entirely false).  The silk repp glove is heavily worked in gold bullion and silk floss.  I wonder how some poor penitent felt kissing this gloved hand? 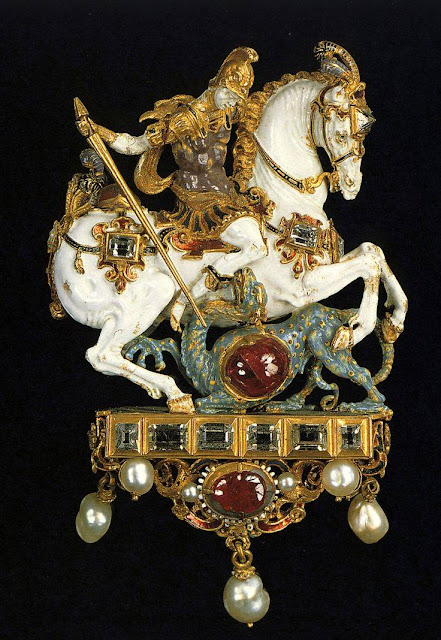 One of the most enduring subjects for the creation of jewelry is mythology and religion.  This brooch is from the 1500s, and depicts Saint George slaying the dragon.  The gold brooch is extensively enameled, and carries several pyramid cut diamonds, as well as two cabochon rubies, and seven pearls.  A brooch like this one would have been an unsubtle cue to viewers about the wearer's spiritual affiliation, and with that, their politics.  What is also of note is the remarkable level of detail in what is not a very large piece.  It is part of the Green Vault jewels of Dresden. 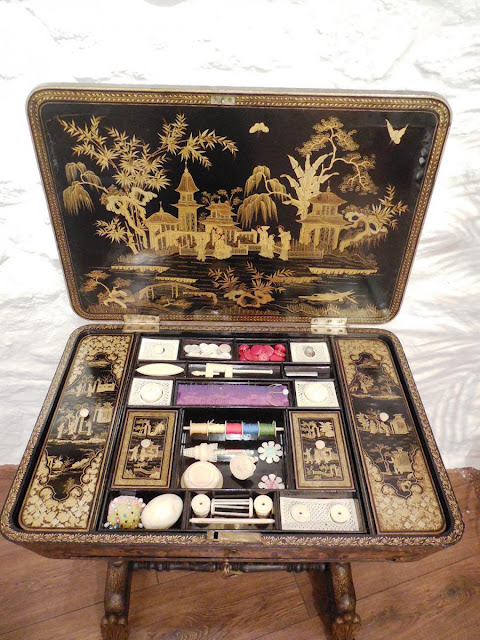 For my last entry, something that is related to Attire but is not Attire.  This is what was called a Necessaire de Couture. It was made by Pierre Adt in the 1800s, during the reign of Napoleon III of France. It is basically an extremely high end sewing kit.  The lacquered paper mache' box holds tools and materials to both create and repair clothing, and to do embroidery work.  Expensive, complex clothing required continual upkeep.  Often gowns would have their trimmings removed so that the dress could be cleaned, and then they would have to be sewn back on later.  As well, refashioning a garment along more stylish lines happened even in the most advantaged of households, since quality fabrics were still extremely expensive.  Boxes like this one were in existence at every possible level of elaboration.  No household was without something like this, though few were as fancy and precious as this, with its multiple tools of ivory, and its gilded lacquer.

So that brings this edition to a close, my dears.  Have a grand weekend!
Posted by Paul G. Ellis at 3:43 AM