The week's wheel has turned another revolution.  So here we are again at Scattertime. 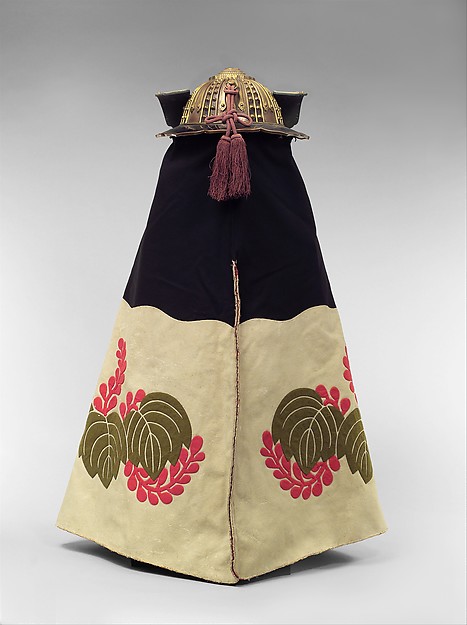 The idea of specialized, easily recognizable gear for particular professions is an old one, perhaps one of the very oldest, since garments that related to spiritual pursuits, and to hunting, were quite likely some of the earliest things we conceived of. It is also a concept that is without borders, having occurred in every culture, everywhere.  This object is a fireman's helmet from Japan, called a Kajikabuto.  Its specificity of shape, and its decorations mark it first as the helmet of a fireman, but also from what district he came.  This one was for a gentleman of the Daimyo class, so this helmet is more ornate, and well constructed than it might otherwise be.  It is made of gilded copper, leather, felt, silk and laquered elements. it now resides in the Met's collection. 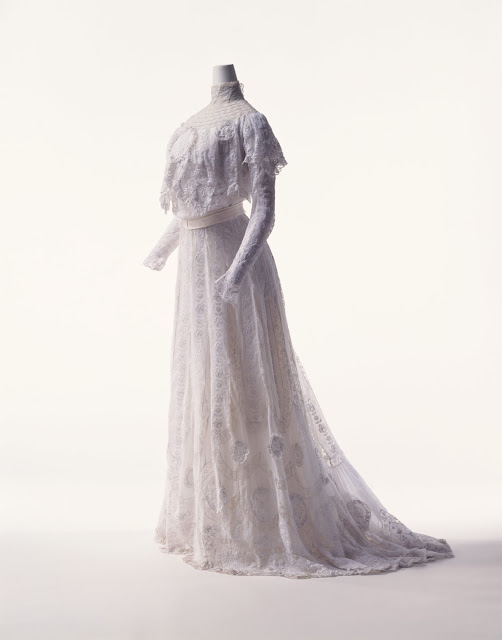 We can barely conceive of less likely construct dresses and complex, yet fragile as this lovely summer dress from 1903.  Created out of cotton fabric so thin it almost rates as a chiffon, it has been masterfully handled with pin tucks, ruching, and dozens of insertions of lace into the surface material.  Such dresses as these feel like next to nothing. I've held and worked on conserving clothes like this, and they are nearly weightless.  I found then, and feel now only the greatest admiration for the skill and patience of the women who made these clothes.  The vast majority of the work that went into them still today must be done by hand.  I bow. 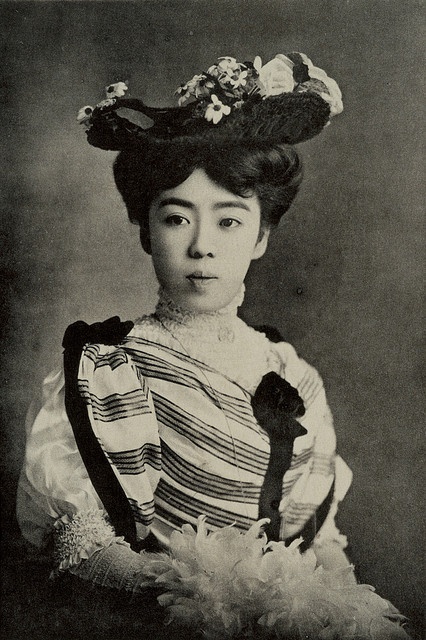 It may be imperialism. It may simply be the inevitable spread of a more unified cultural aesthetic in its infancy.  It may be a group of people choosing of themselves to take on the appearance of another culture, because they found it admirable in some way. What it most likely is, is all those things, and more that we cannot know.  Whichever focus you choose, (if you must choose one), the fact exists that once Europe began regular trade with Japan, almost immediately people there began to try out the Attire words that were strange to them, but daily use to us. And the reverse was also true. Europeans and Americans began attempting to use aspects of the lexicon of the Japanese variant of Attire to broaden their own vocabulary.  What is particularly interesting to me about this image is that there is not one single reference in her clothing to her own culture, she is dressed entirely in a manner that would draw no undue attention on the streets of London, or New York.  Image is attributed to Kozaburo Tamamura, (B1856-D1951) 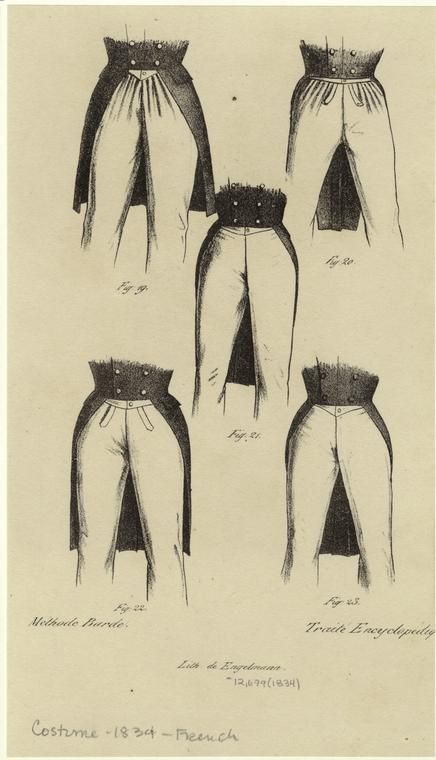 Women are hardly the only ones who have been treated to massive changes in silhouette that were appropriate to one body type, then to another.  During the 1830s and 40s it was fashionable for gentlemen to appear in a way that would be considered rather, "hippy" to our eyes.  The idea was to create the impression of a tiny waist, and to do so, trousers were cut to have more volume at the top so that there would be a bit of addition to the breadth there, visually diminishing the waistline.  At the same time it was fairly common for men to wear corsets to exaggerate this difference of size further.  Gentleman's trouser styles, 1834. 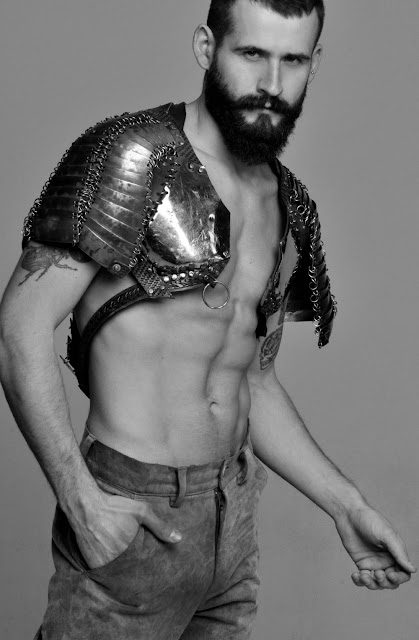 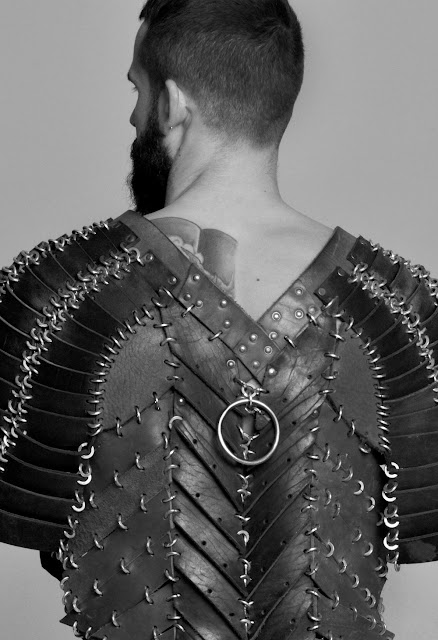 Costume? Fetish gear? Fashion accessory?  The truth is that like so many parts of the Attire language, a single term like this one can have multiple meanings, and those meanings can be shifted subtly depending on the other words in use with them.  This item on a person who was otherwise naked, speaks in one way.  Put it on someone in lots of leather gear, it shifts meaning. Put it on someone in reenactment, or cosplay clothing and yet again another meaning, though the word itself does not change. 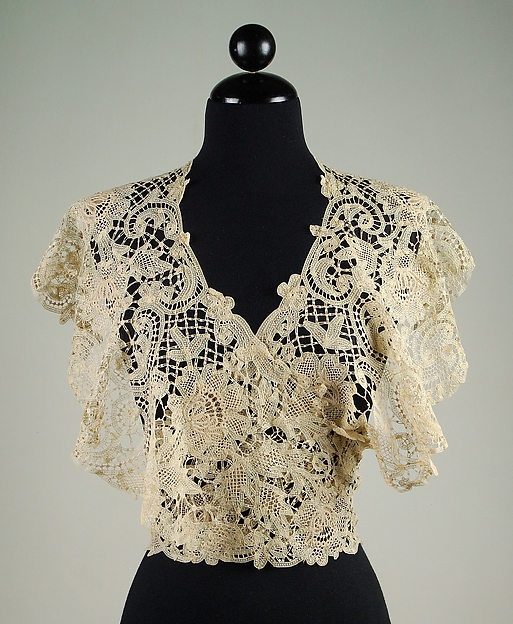 Here is an Attire word that had fallen entirely out of use.  The fichu.  It was a triangular scarf, sometimes of lightweight fabric, sometimes of lace, as here.  It was worn two different ways. The fist was gently over the shoulders, and tied in front, or tucked into the top of the bodice.  The other was as seen here, crossed over the front at the waist and tied in the back. It served multiple purposes. It helped to keep one warm. It altered the appearance of an existing gown. And it could cover over excessive cleavage when milady wanted to be more discrete. This example is from near the end of its use as a word.  This hand made lace fichu is from 1899. 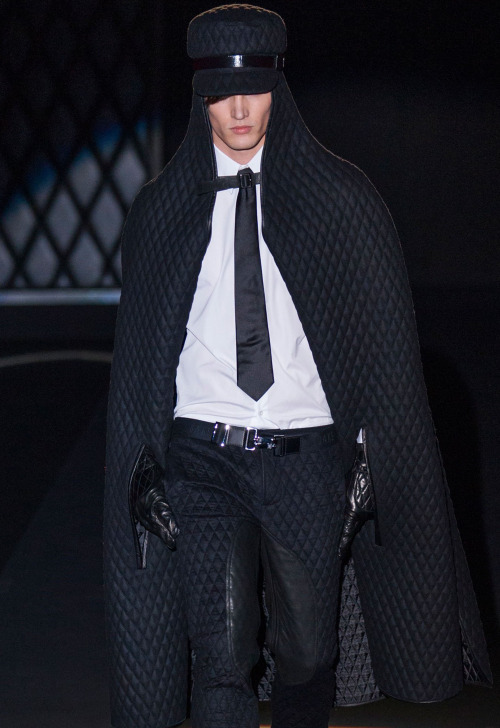 Interesting concept, here.  I like the notion of the cape that extends from the top of the head.  It's not exactly a hood.  I like the idea, even though it's potential for reaching the real world is slim to none.  What I can see is some hip young fellow picking out those trousers with the quilted panels and working them to hell and gone.  Daks F/W 2015 collection of menswear. 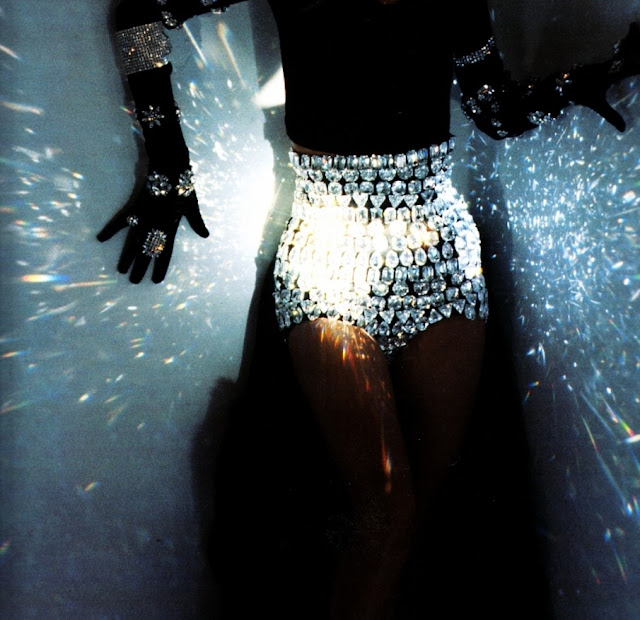 We have gotten used to the fact that designers will always create a certain number of pieces that are really just for the runway, to express some idea of the essence of a collection, with no real thought to anyone actually ordering them.  This is certainly a case in point.  A pair of granny panties entirely covered in huge rhinestones.  Utterly impossible to wear in any comfort. Sitting, I would imagine would be perilous, and bumpy.  However, as an item of complete absurd fantasy, kind of awesomely fabulous.  Beyonce?  Are you listening? 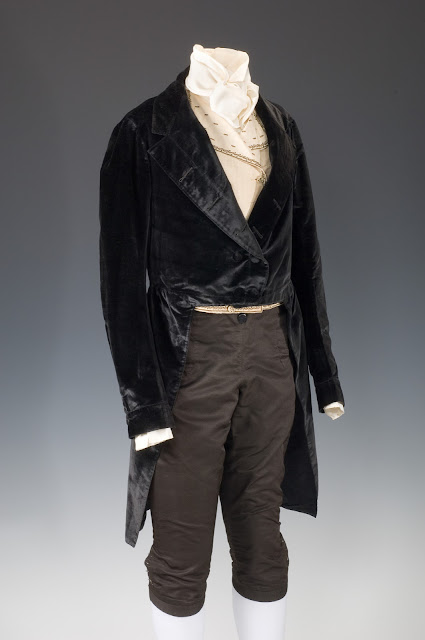 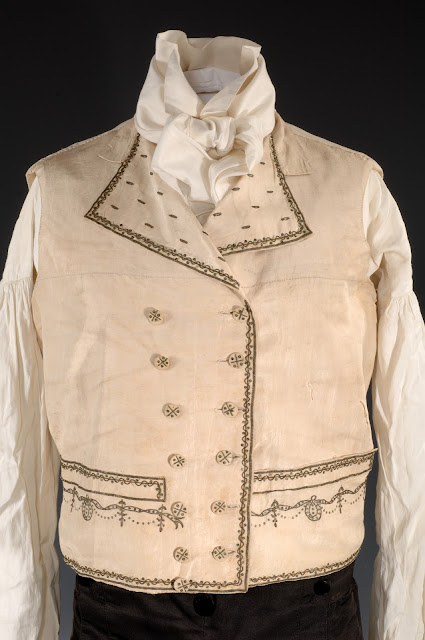 Mr John M. Bowers of Cooperstown New York owned and wore this suit.  He is chronicled having worn it when he took possession of his home Lakelands in 1805, and possibly 3 years earlier when he married Margaretta Stewart Wilson.  It is a wonderful example of the men's fashions for the earliest part of the 1800s.  The coat is of black silk velvet, and the breeches of gray silk.  The waistcoat is pale cream silk embroidered with metallic thread and sequins.  It is a look at the quieting of menswear in progress. From this point onward men's clothing adopts the colors and the general forms it largely still has. 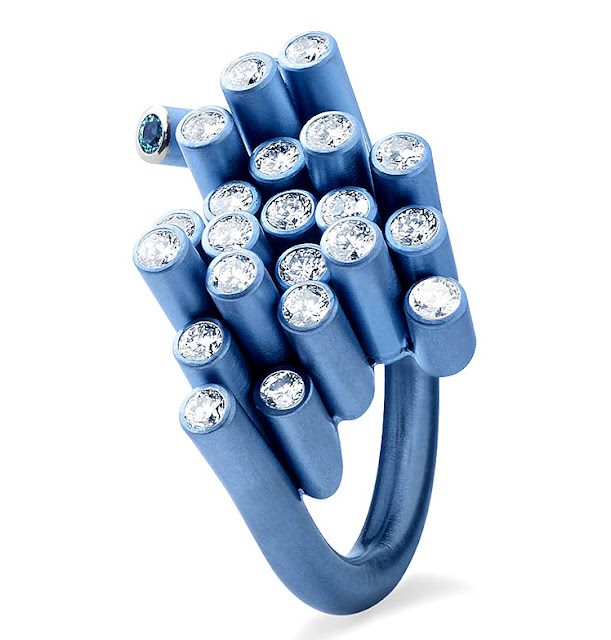 Jewelry designer Suzanne Syz created this ring called "If I Had a Hammer". It is made of blued titanium and is set with diamonds and a single Paraiba tourmaline.  I love the fierce modernity of this piece.  One of the things I appreciate about jewelry design is that it can go further afield with greater success and hope of use than clothing design. We are much more willing to embrace the idea of a single truly unique accessory, than a whole avant garde ensemble. 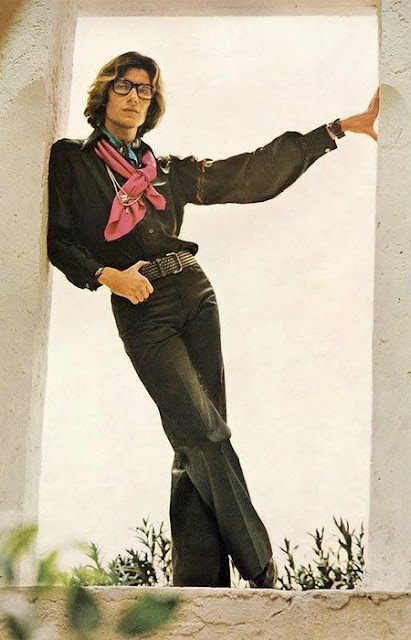 One of the other things that Yves Saint Laurent contributed to couture, aside from bringing street fashion into the upper markets, was the determination to position himself as a visual reference to his own aesthetic viewpoint. He was one of a group of young designers who marketed themselves as part of the whole package.  So, where most other designers slipped behind the scenes, or at least maintained a discrete profile, these professionals moved themselves out into the public eye as a symbol of what you were getting philosophically from their brand.  Yves Saint Laurent and his compatriots of the time, changed the whole way that it all got done, and began the cult of celebrity around clothing designers that continues today. 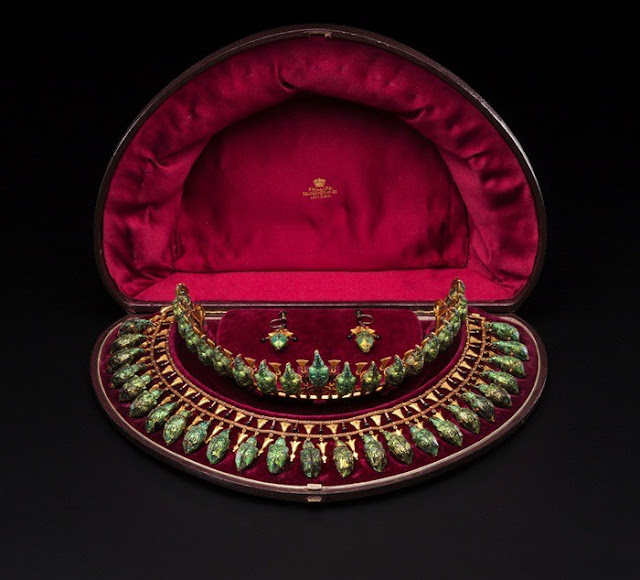 As a closure to today's selections, this parure of jewels from Phillips of London.  This parure of necklace earrings and tiara was ordered by Lady Granville in 1884 or 1885.  What makes it one of the more unusual survivors of this period is the subject matter.  The gold pieces are decorated with rows of translucently enameled beetles.  It's certainly one of the more bizarre sets of jewels I've ever seen.  And that it survives also with its original case is a delight.  The style of the work, and the use of the beetles places it squarely into the Egyptian Revival, which was going full tilt at the time.

So that, my friends is that for this week's edition.  Have fun this weekend and Happy Valentine's day to all and sundry.