Good morning!  Welcome to this week's pile of curiosities. No matter how many of these I have done, I always seem to find more things worth looking at, and commenting on. Oh those endlessly creative humans, they supply me with more than I could ever remark on.  But enough of that. To work! 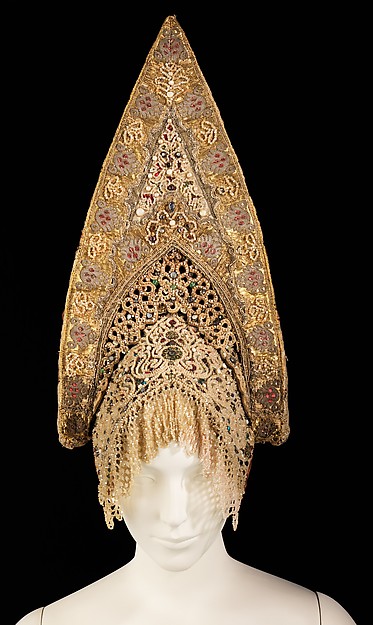 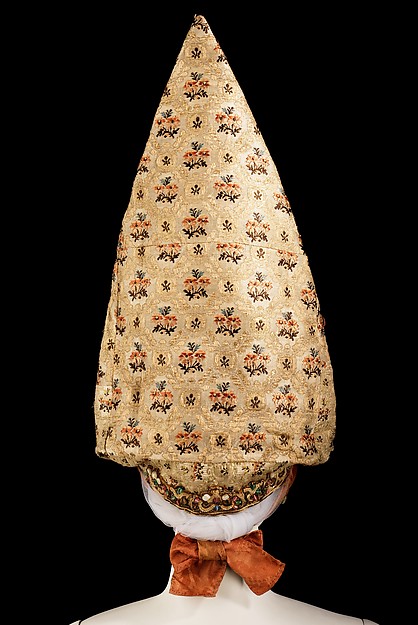 First in the queue today is this example of a traditional Russian headdress called a kokoshnik.  It was mainly worn in the northern parts of Russia, and was in greatest use between the 16th and 19th centuries.  Shapes varied wildly from halo-like, to square, to pointed.  This particular one is from the 1780s. This one is especially lavish since it is decorated with extensive gold work and masses of pearl embroidery, as well as the traditional pearl fringe at the forehead.  As ethnic traditional head gear goes the kokoshnik is one of the most extravagant, and expressive.  These headdresses were worn by married women, and could be decorated with anything from plain applique of floral forms, to silk embroidery, to the sort of over the top version we have here.  Here in the 21st century they have been relegated entirely to folk costume status, only appearing at festivals, historic reenactments, and of course, Russian opera, and period film. 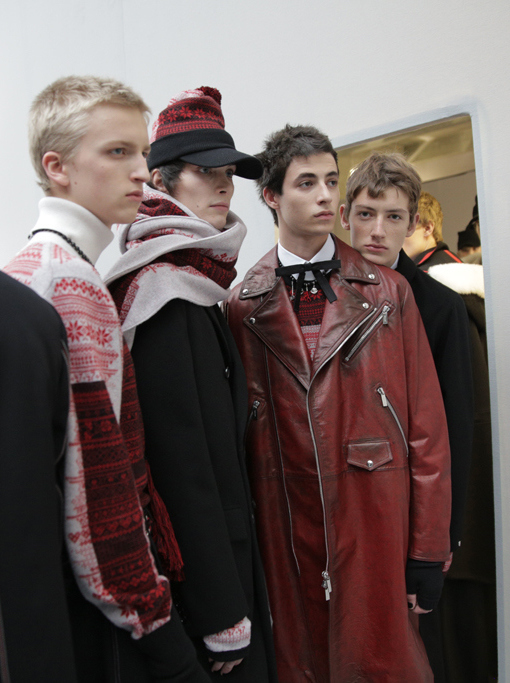 Backstage at the Dior Homme 2016 F/W runway.  Here are four of the models.  I am struck by the shift in how males are being presented here.  Instead of the burly dude thing, we are getting fragile hothouse flower.  And the clothing, though based on very traditional menswear concepts has been tweaked to discharge some of the standardization that plagues most men's design.  In particular I like the idea behind the red coat.  Taking a motorcycle jacket and extending it to overcoat length diffuses a lot of the macho charge appended to it.  of course, teaming it up with a western style tie, a ski style sweater and fingerless gloves helps a lot.  It just interests me that this delicate male image is not a trope we have seen much of late. 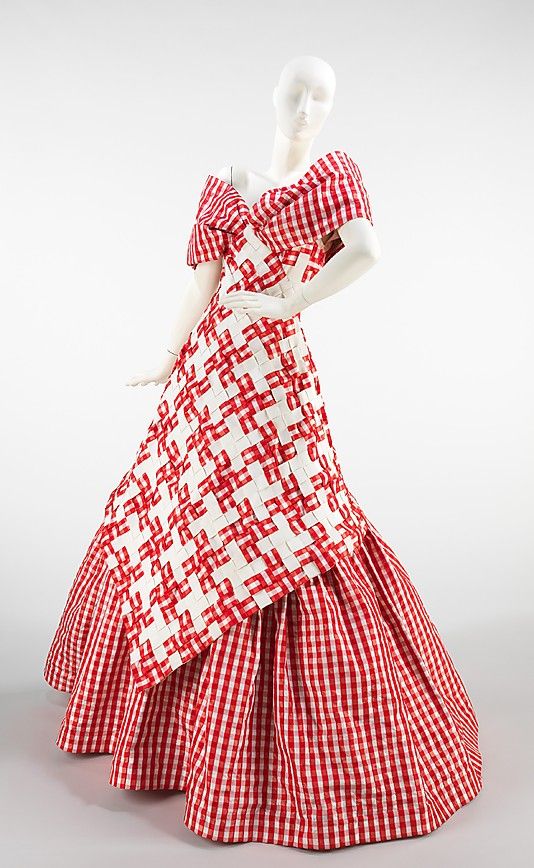 This ball gown is from 1988.  It appeals to me for a couple of reasons. One is the use of a traditionally casual textile pattern, gingham, which we associate with summer, picnics, and farming.  The other is how the fabric has been manipulated through weaving it in strips into a massively over-scaled houndstooth check.  So we get a completely different textile reference laden on top of the first one that allows this finished garment to essentially relay two different things at once to the observant viewer.  Part of what makes this work so well psychologically is that houndstooth check is most often a woolen fabric and it is associated with outdoor life, just like gingham is. 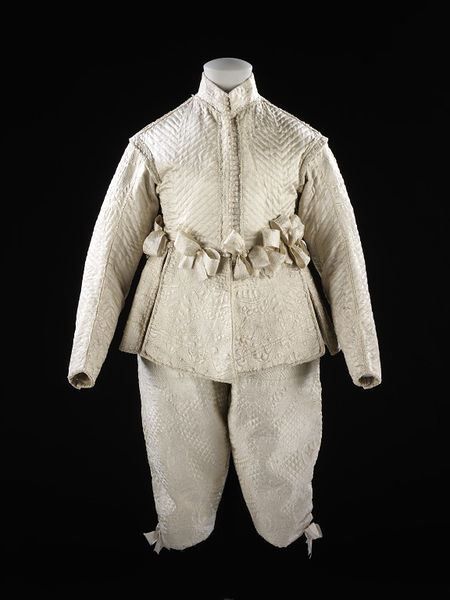 This is a man's suit from 1630.  Aside from it's rarity for being so old, it is also unusual for it's being entirely white.  This suit is from the period when men's and women's clothing was placing the apparent waistline just at the base of the ribcage.  Looking at this, you can see that the waist point has been lifted above the elbow line. It also makes the body appear broader through the middle, while extending the leg line.  It was curious mode that skewed the body proportions.  The suit is completely covered in finely worked quilting, and still has its original ribbons.  The bows you see are ribbons attached to the breeches, and drawn through eyelets at the waist of the doublet to hold the two pieces together. There have been assumptions made that this was a wedding suit, but there is no substantiation for it. 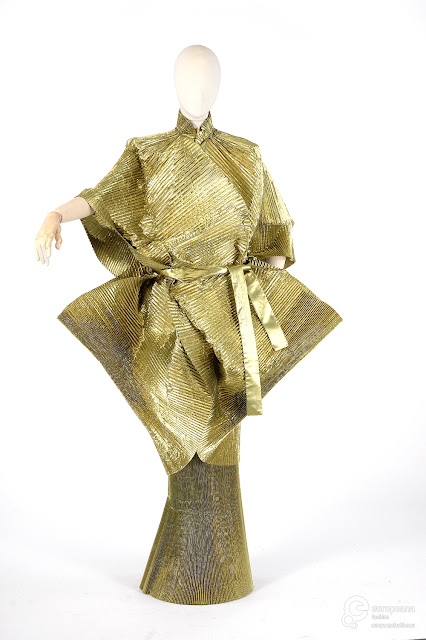 Designer Popy Morena created this pleated gold ensemble in 1983. Taking cues from the then emerging Japanese designers like Rei Kawabuko and Issey Miyake, Morena created an interestingly sculptured shape from the gold textile.  As an experiment with this unique aesthetic, it is laudable.  I'm not sure it's entirely successful. There is something that doesn't seem harmonious to the finished piece about the way the torso is wrapped.  Perhaps if I saw more images of this it might resolve my concerns.  That said, it's an arresting look and a fine effort. 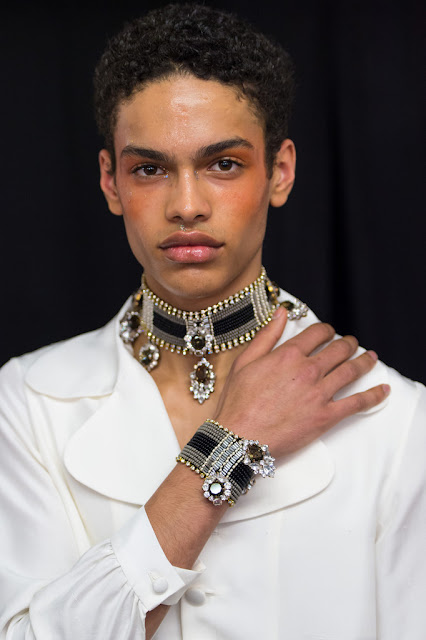 Here I go again about the slow blending of apparel choices as we explore our ideas about non-binary sexuality.  Jewelry for men has been an expanding category for some time, and This is just taking that to the next logical level.  If a necklace, or a bracelet are okay, then why not a statement necklace, or bracelet? Why not both?  This is an interesting direction, and I wonder if it will take hold in the mass market?  Grace Wales Bonner, F/W 2016 Menswear collection. 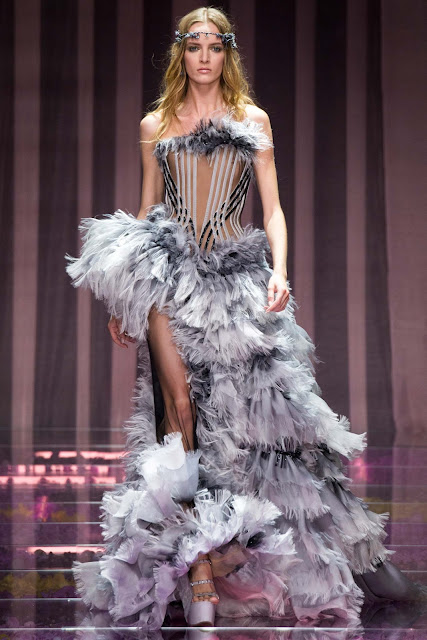 This is such a curious construction. Though it is clear that this is supposed to present a woman as super duper sexy, it ends up being curiously sexless.  The corset bodice with the emphasized boning should take us to Sexytown.  The uneven frill of fabric at the top, seems to stop that process.  The expanse of leg, which could be highly charged, doesn't spark in the way it should because the huge mass and complexity of the rest of the skirt pulls the focus away.  The choice of varied shades of gray for the layered frills, has it's own visual impact.  The whole piece drops down in terms of its ability to confer sex goddess status because of the feelings we get from gray.  Gray tends to make us feel inert, passionless.  It's an odd juxtaposition, that could work in another form but doesn't in this one. 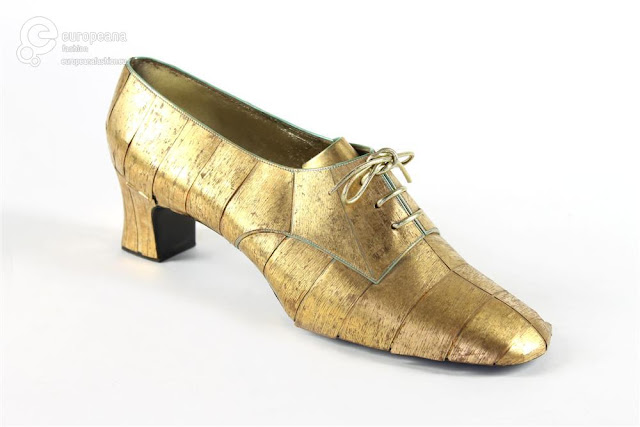 Roger Vivier was one of the most influential shoe designers of the 0s through the 60s, partnering most famously with Christian Dior, and then later, with Yves Saint Laurent when he opened his own house.  This brogue style shoe is made of gold kidskin that has been covered with gilded wood.  What makes the design actually functional is the narrow spaces between the wood strips that allow the shoe to flex as it should.  Even under the best of circumstances these would not be long lasting, but they sure have a strong message to convey. 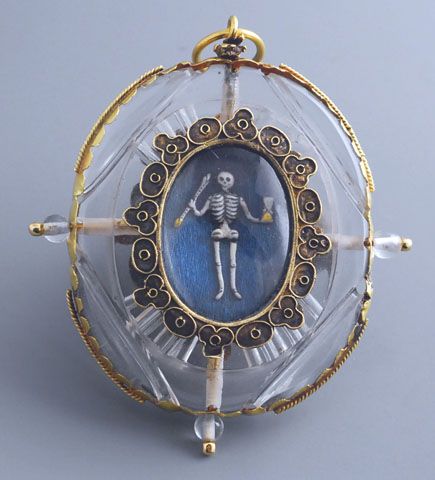 This memento mori pendant was created in 1500.  We have been making memorials to our loved lost for as long as we have been around as a sentient species.  We have been making jewelry for this purpose nearly as long.  It's really only in the 20th century, with the easy availability of both photographic and film records that the practice slid into disuse.  This pin, it seems likely, was not made for a specific person, but rather was made by a jeweler as a sale item for their place of business, that could be used by anyone in the mourning state.  The pendant is of gold, with carved rock crystal, glass, and a tiny figure of a skeleton holding a staff, and an hourglass.  The workmanship is good, but not superb. 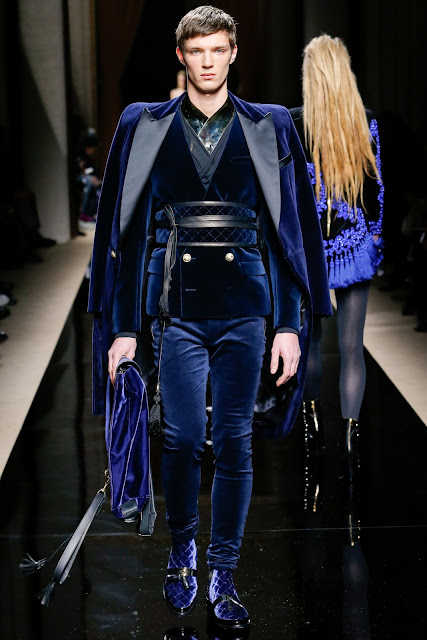 Though I can't imagine how long it must take to get into and out of all of this, I gotta say I love the interplay of the Japanese inspired, overlapped layers of the jacket, vest and shirt, with the more western traditional cut of the coat and pants.  It's a kind of cultural merging that I appreciate.  What gets created is a harmonious new synthesis that I find very appealing in this instance.  And, oh yeah, that BLUE! 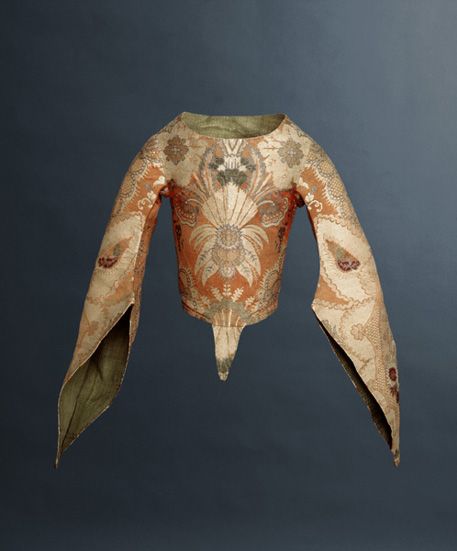 This artifact could stand on it's own as a piece of sculpture it is so beautifully balanced in every respect. This is a dress bodice for a small girl from between 1720 and 1735.  The cut is sublimely simple. The magnificent textile is positioned perfectly and is immaculately sewn.  Whoever the unknown dressmaker was, she deserves very high praise.  This bodice is also a not very gentle reminder that little children wore corsets just like their mothers did.  The amount of constriction was slight for children's corsets, but it was thought that training was needed to be able to wear an adult corset.  It was also a handy tool for encouraging good, erect posture. 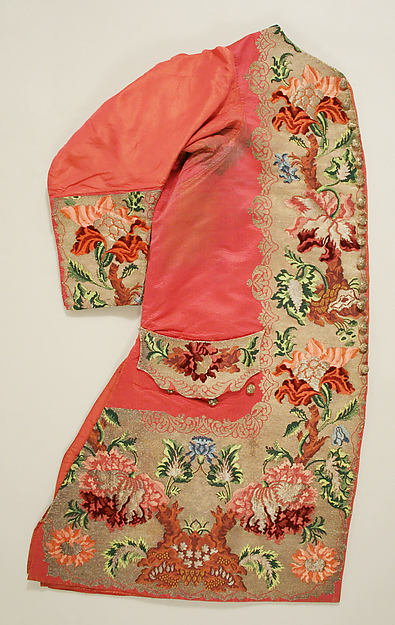 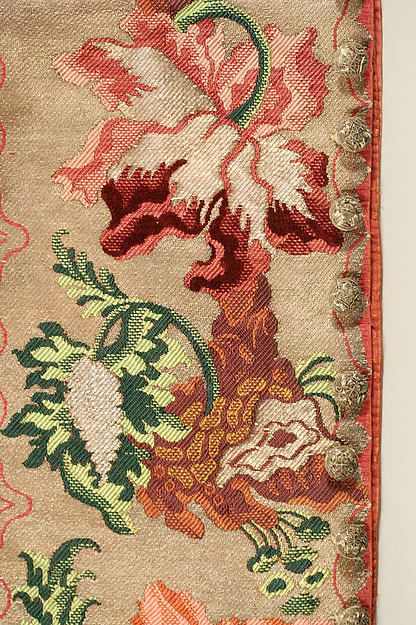 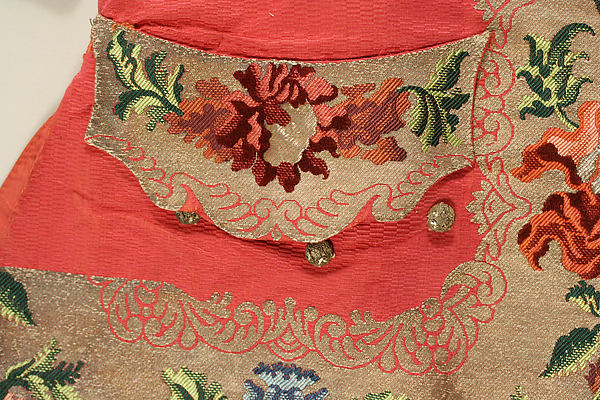 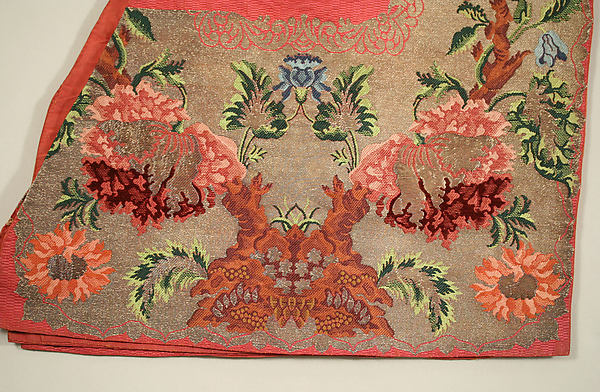 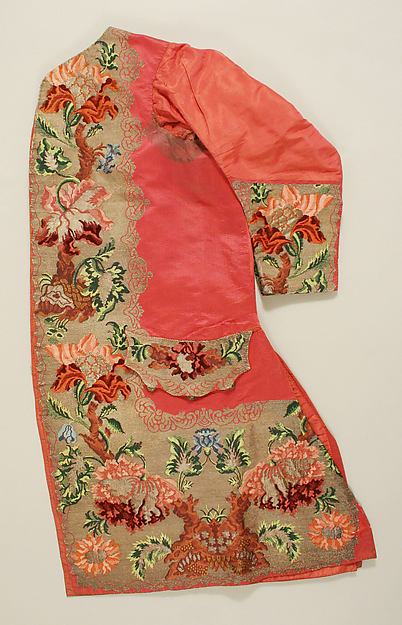 This last item is quite a rarity.  Though we have many splendid examples of printed or embroidered waistcoats from the 1700s, this is one of a very few examples of a waistcoat whose pattern has been specifically woven to be made up in the manner it was made. The technique is referred to as en disposition, and it allows a complex pattern to follow specific garment shapes without interruption.  In cherry red silk, the brocaded pattern is a riot of flowers, leaves and branches in gold metallic thread, red, green, brown, and blue silk.  Made in 1733, this is also from the period when waistcoats had sleeves.  The fashion was such that the sleeves of the coat were slightly shorter, allowing the decorated cuff of the waistcoat to be seen, and admired.

So that's the lot for this week, folks.  I hope you enjoyed this wander.
Now get away from your computer and go have some fun!