I'm heading up to Oregon with my partner tomorrow for a week of fun, and visits with family.  I will be doing my best to stay on top of things here and on facebook, but a couple of places we will be will have, shall we say, spotty internet coverage. So things may be more broadly spaced than usual.

Okay so that's out of the way.  Let's dive into this week's Scatter, shall we? 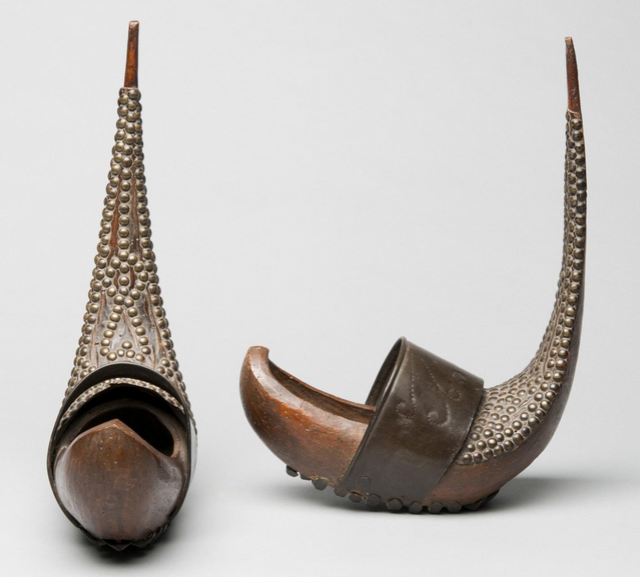 These are one of the more bizarre footwear fashions ever created.  These wooden bridal shoes are unique to a particular region of France, close to the Spanish border, called Ariege, south of Saint Girons.  They originated in the 9th century when Moorish invaders raided a French village and kidnapped some women. The villagers retaliated by attacking the Moorish camp, and killing the invaders by stabbing them through the hearts with the points of their clogs.  The practice of making these shoes continued, morphing over time to become a wedding gift by the groom to his bride.  The height of the point was to indicate the greatness of his love for her.  Man, are we human's strange, or what?  Who doesn't like a bit of "blood of thine enemies" to spice up a wedding? 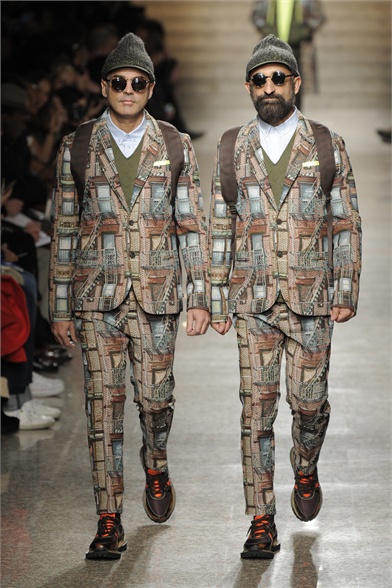 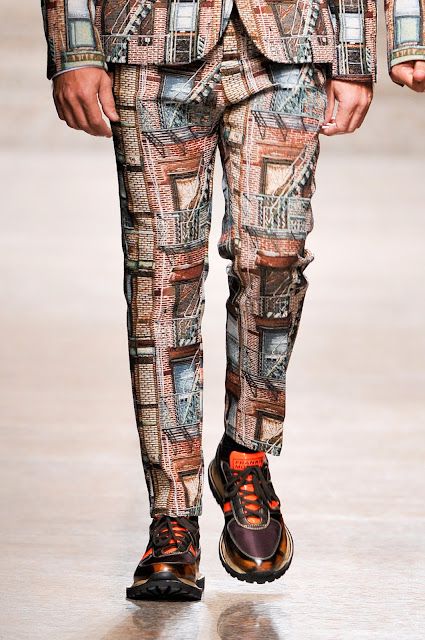 Another nudge at the menswear traditions. Another little shove, really.  These images are of Frankie Morello suits from 2013.  The digitally printed material of the suit drags it into surreal territory, and also makes the silhouette less body revealing, since it is so visually confusing.  While I champions any thing that creates new ways of configuring men's apparel, this sort of suit is unlikely to ever really catch on.  Just the jacket?  Sure. Just the pants? Sure. Together it's really too much of the same pattern. 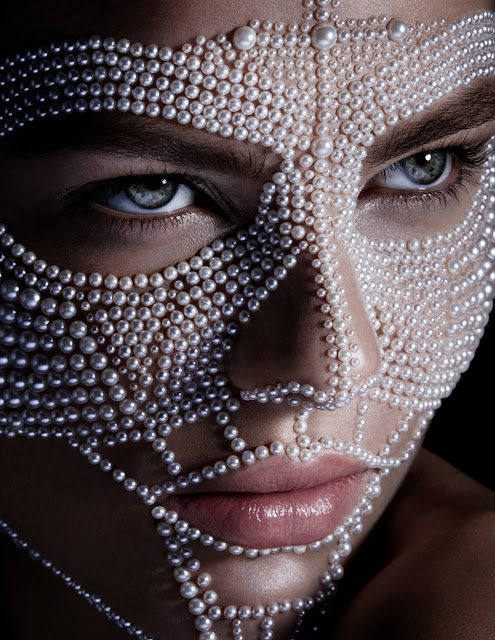 Mask? Wearable art? Make up? All of the above?  This is strangely compelling to me.  The way the applied decoration both reveals the contours of the model's face, while also acting as an obstruction to our truly seeing her is what creates that odd pull/push response.  Like a veil on a hat or a hood concealing part of the head, we want to get past it.  Perhaps it's just our inexhaustible curiosity that is in play. 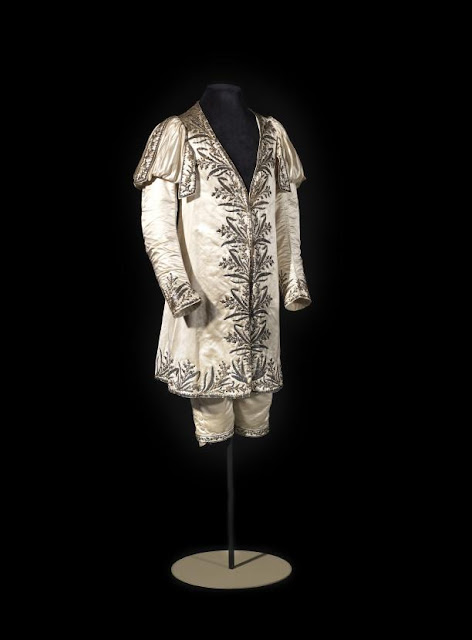 After the revolutions in the North America and in France, clothing for both sexes changed immensely.  But even though menswear simplified and lost nearly all its decorative detailing, there were both holdovers from the old, and experiments with new styles, that didn't survive.  This is a great example of one of those experiments.  This coronation suit was made in 1814 or 15 for King William I of the Netherlands.  It takes elements of the Ancien Regime, mixes it with 19th century ideas, and throws in a few other elements.  The breeches and coat sleeves are right out of the 18th century idea book. The coat is surprisingly loose in its cut.  The shoulder detail is almost, but not quite, Tudor period. Since this was for a coronation, and the clothes were often a step or two outside of regular formal wear, it's not a big surprise.  What I find interesting is how contemporary the cut of the coat is, (minus the shoulder detail).  I have found no portrait of William I wearing this suit.  The official coronation portrait has him in very sober military garb. 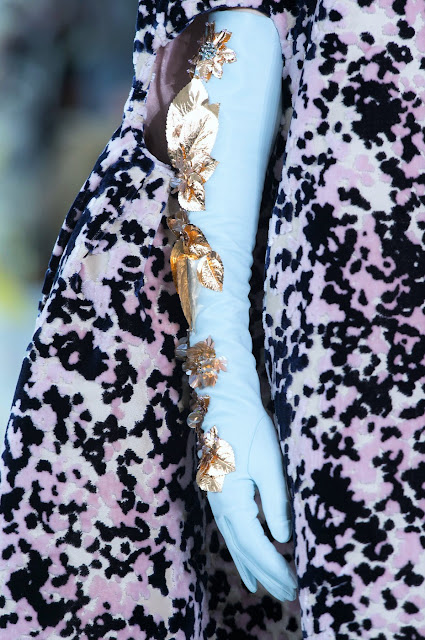 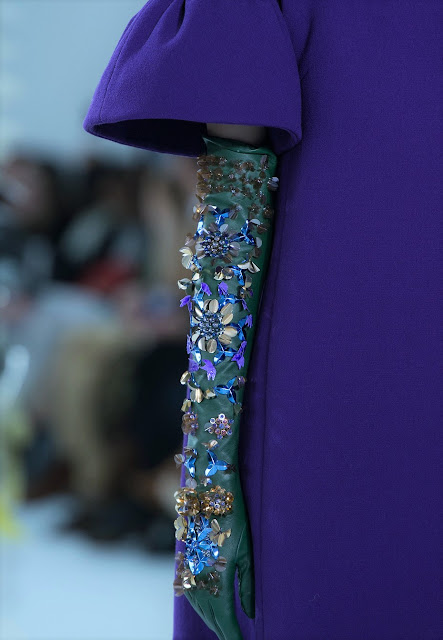 As an accessory, gloves have risen and fallen. These days, apart from gloves to simply keep the hands warm in winter, they are largely not worn, outside of costume events. That said there is something wonderfully expressive about them, especially when they are decorated in some way.  These two pairs of gloves were runway accessories at a Delpozo show this year.  There is something poetic about these.  I approve. I'm sure the people at Delpozo are relieved to know it. (grin) 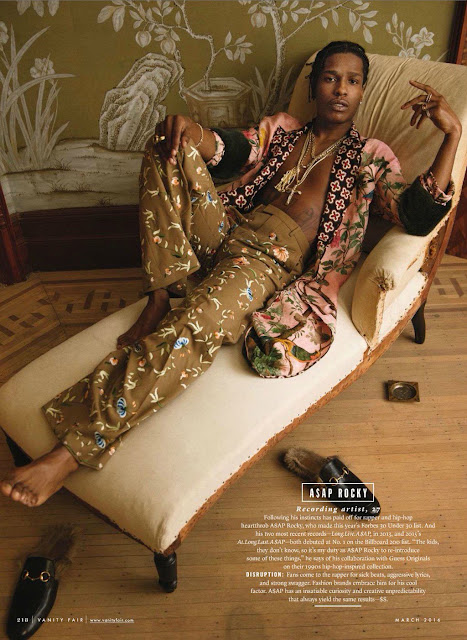 A$AP Rocky is one of the more significant Rap artists to come along in a while, and a good part of his appeal is his willingness to push forward a new manner of appearing, that steps away from the now tired tropes of too big pants, and backwards ball caps.  This image is from a Vanity Fair article and photoshoot that in part chronicled his collaboration with Guess Originals.  The garments here are loosely fitting, sexy and possessed of a real elegance.  It's an interesting new angle on dressing men.  I could imagine clothing along these lines moving into mainstream wear. Their ease and comfort would be big selling points. 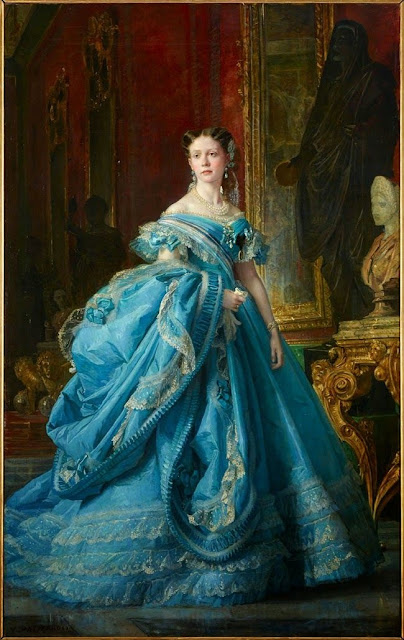 This is the Infanta Isabella of Spain, who became Queen of Spain for a fairly short and tumultuous reign, only to abdicate, and spend the rest of her days in exile in France. Her dress is of the 1860s, at the point of the crinoline's greatest dimensions.  Her gown possesses a rather heroically long court train, which she has draped over her arm, (a surprisingly casual addition considering its a royal portrait).  Even without the train this would be a garment for a person of vast wealth.  The inclusion of so many dozens of yards of hand made lace alone would attest to that.  This is in many ways a classic example of the middle road of style during that time. The dress is actually quite conservative in its design. No garish colors, no bold decorations.  The bodice is modestly high in front, and dips to the sides to show the shoulders. 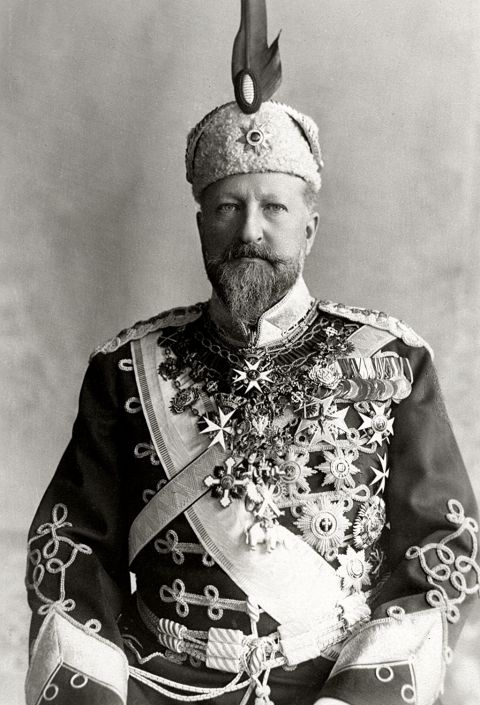 This, on the other hand is Tsar Ferdinand of Bulgaria, who is not trying to be conservative. He is making sure that there is no doubt at all about who is the boss. Not only is his uniform jacket overburdened with huge froggings and cording trim, he is laden with so many medals, orders, badges, sashes, and chains of office that it's hard to see his uniform at all. It's more than just a visual display of power, its a shout for attention.  Bulgaria was never at any time a major force in Europe, but the Tsar was sure going to make you think so.  Or perhaps, as is the case for so many of us, he was trying  to convince himself of that, even more than whoever saw him. 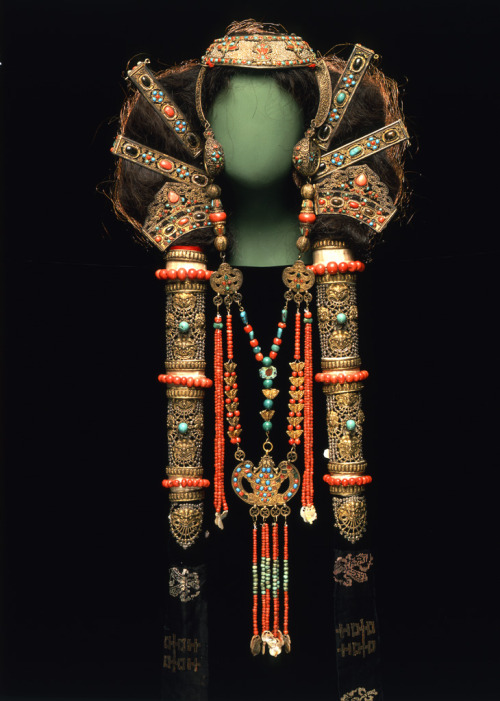 Most of you, (me included) will take one look at this and say "Queen Amidala!" Certainly headdresses like this one were the source point for that now iconic film costume. This is a woman's headdress from Mongolia, from the 1800s. The brass is decorated with carnelian and turquoise beads, with black glass stones, yak hair and silk cord.  Like so many Attire concepts, this one is meant primarily to convey wealth, and station.  The wearer was a woman who had married a man of considerable power and means, and she was expected to display that connection.  It is fortunate for her that she would have been relieved of most kinds of labor, since this is doubtlessly heavy and uncomfortable.

This 18th century chainmail armor was worn by Sultan Mustafa III of the Ottoman Empire.  The mail is decorated with gold plates, and gold mail.  The plates are decorated with jewels as well. It is an example of parade armor from another culture.  Even though plate armor as was common in Europe was well known, it was not in use, mostly because it was simply too hot.  Plus the increased mobility afforded by mail armor served well to offset the lessened protection. And I just gotta say, It's kinda sexy looking. (grin) 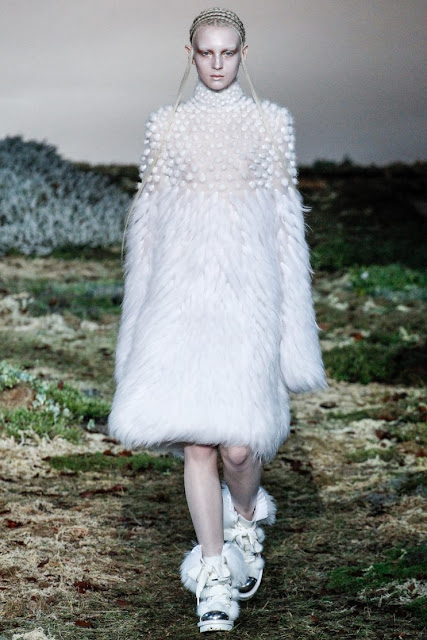 Alexander McQueen, Fall/Winter 2014-15.  For me this is a wonderful meditation on the ability of texture to powerfully affect how we see something, and what we feel about it.  Devoid of this lush feathery mass the shape of this garment might only seem odd.  Adding this texture that practically begs to be stroked to it makes this into something poetic, and somewhat eerie.  It also takes into that realm of transformation I speak about so often. This model is no longer entirely human, but some hybrid of person and bird. 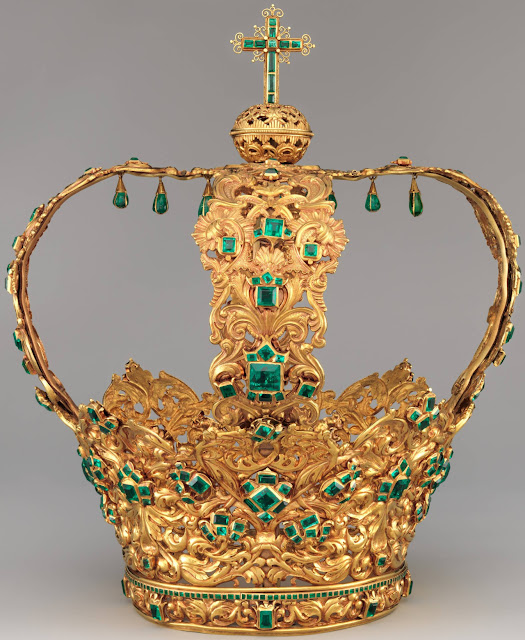 Cultural imperialism made solid, as in solid gold.  La Corona de Nuestra Señora de la Asunción de Popayán, also known as the Crown of the Andes.  It was made for a larger than life-size statue of the Virgin in the Cathedral of Popayán, Colombia. It was created at least in part in the 16th century. The emeralds that adorn it are supposed to have been seized from the captured Inca Emperor, Atahualpa, who lived from 1497 to 1533.  It is undeniably beautiful in a barbaric way, and a masterful piece of the jeweler's art.  It is also a monument to the eventual subsumption of indigenous cultures to invading peoples.

Well, that rounds out this week's dozen, so get thee up, get thee out, and enjoy thyself!
Posted by Paul G. Ellis at 4:00 AM