Morning all!  I know you had to go without your weekly romp through my cluttered head, but I'm back on track, so here goes! 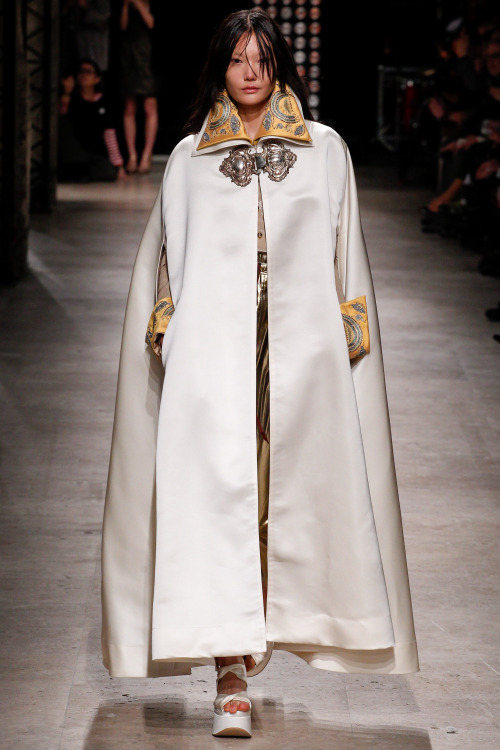 Scale is a major force in how we perceive someone else. Large people and things get our attention more easily, and suggest to us that the strength of the statement made is greater than average, so greater heed must be paid.  Of course, in matters of scale great caution must be used, because there is a vanishingly thin line before the bold remark and a visual joke.  This effort from Vivienne Westwood treads that thin line quite well.  The volume of the cape is balanced by the size of both the collar, and the decorative clasp.  I manages to veer away from the clownish, and maintains an elegance that is partly due to it's being otherwise unornamented. 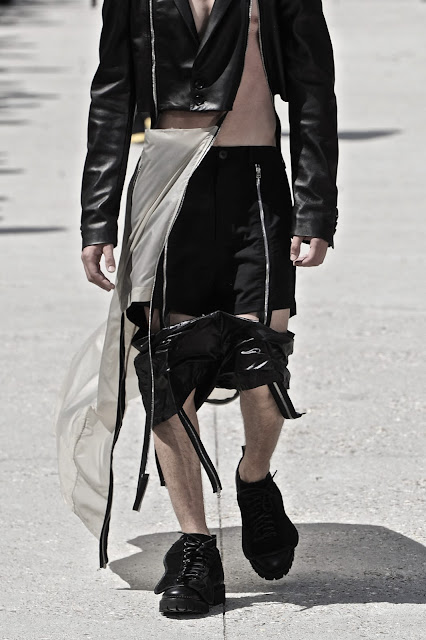 One of the things that keeps getting expressed in modern design is a sense of confusion, of helplessness.  There is a sense of futility and lack of direction that manifests in a good deal of the avant garde design that happens now.  It's my opinion that this is a mechanism by which we are able to comment on our feelings about the society in which we live. This detail image of a Hood by Air design is a perfect example.  It is a collection of thoughts that end up making no sense. It is trying to be sexy, yet it is curiously sexless. It wants to convey danger, but relays a kind of silliness.  It has elements that have no function whatever, but are not effectively decorative.  So the final message is a series of disjointed shouts that cannot be understood.  As a visual metaphor about our relationship to our current culture, this is spot on. 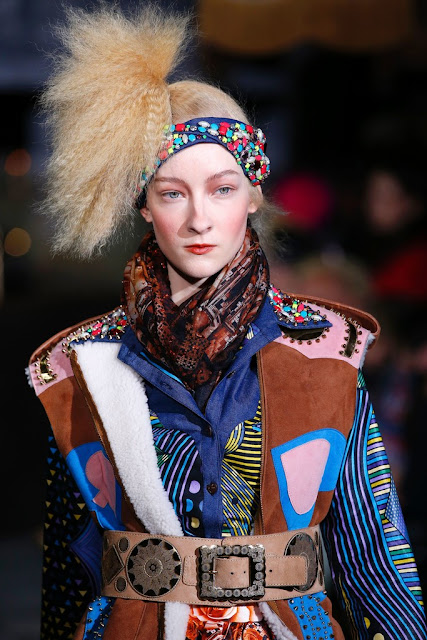 While this ensemble from Manish Arora could be in the same category as the Hood by Air one, it is not.  Though we are being bombarded with multiple kinds of messages through the patterns, colors, and textures on display here, the resulting Attire paragraph is a coherent one.  The palette of colors is in harmony because enough of the hues are repeated on enough of the elements to connect them visually. The circular motif is also reproduced in various places, assisting us in seeing this as cohesive.  So, this bit of conversation becomes partly about managing, and balancing the intense number of influences that push us and pull us. 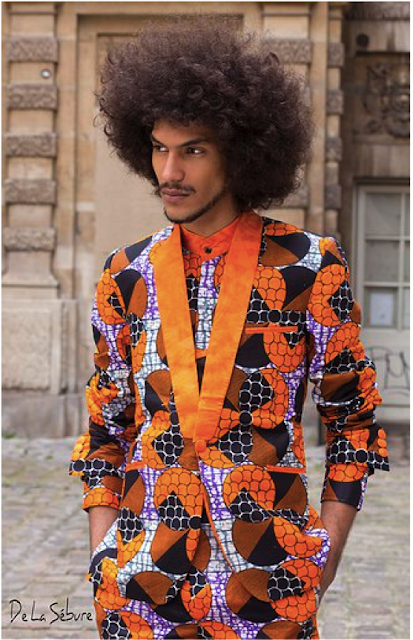 Patterns can both help define shape, and also mask it.  In the case of this suit of clothes, it conceals, rather than reveals.  The model here becomes a mass of pattern with a head.  The proportions of the body are only glancingly referenced with the solid color lapels.  Since covering the body is such a primal aspect of Attire this variation on that idea is understandable.  And the way that the pattern both moves over the body underneath, and moves through space as we observe it contributes to the totality of the message we get from it.  In fact, that becomes the singular focus. 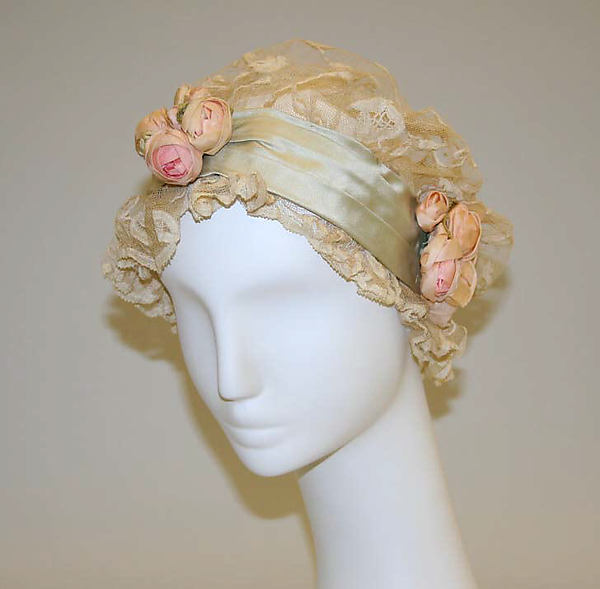 This charming object is a boudoir cap from the early 20th century, close to the end of it's use as a daily Attire word.  Their primary function, apart from warmth, was to keep milady's hair out of her way during sleep, and while dressing.  It was also a manner of personal expression, since most often they were the lady's own hand work. 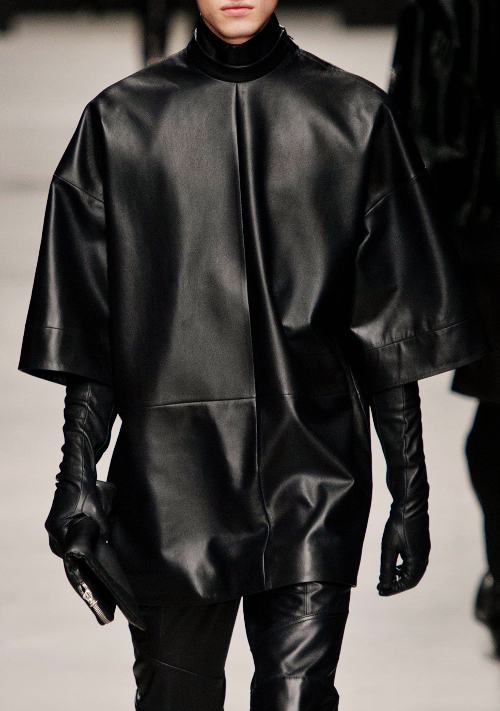 Choosing to deck yourself out in one color, texture, and finish is both a simple way to create a strong impression, and a difficult thing to pull off well.  The power of the seen paragraph about the wearer comes close to being a shout, so it must be handled carefully because it veers into costume territory quickly.  This Juun J ensemble is stark, slightly menacing, and also a mite creepy.  Even though the top is voluminous, the addition of the long gloves seals the person away from us.  In a real world application, I'd love to see how this shirt and pants would read without the gloves.  The kinkier aspect of it would fade considerably, I believe. 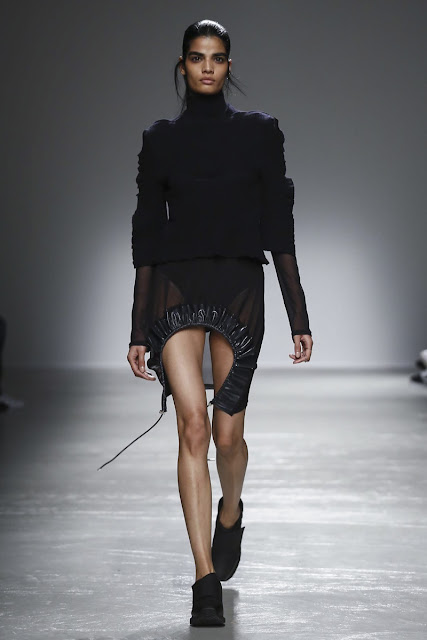 It is hard for me sometimes to see something like this and stay neutral.  But I'm gonna give it a heroic try.  The major talking point is of course the sheer skirt with the cut out in front.  It looks as though the opening can be altered somewhat by the cords with cord stops that hang from both sides.  Also, the position of the sheer material on the sleeves, creates a cohesion that is pleasing.  Even expanding the size of this image, it's tough to see exactly what is happening with the structure of the top.  It looks to be deliberately irregular, which also references the shirred effect at the skirt opening.  It would be easy to disapprove of this design based on societal expectations, but I say, if a woman wants to, why not? 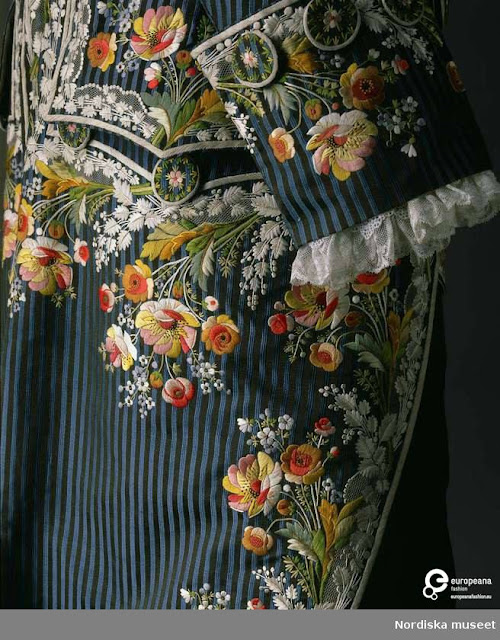 Because it's just darned gorgeous, is why.  I continue to be gobsmacked at the level of artistry that went into these court suits from the 1700s.  The number of person hours, and the number of sets of hands involved to make such clothing was great.  The embroidery alone probably required several skilled women, and a good deal of time. Then the tailor's shop would have put three or four fellows onto this project.  The result of all that effort is a piece of sublime artistry that would still require nearly the same amount of time to accomplish today. 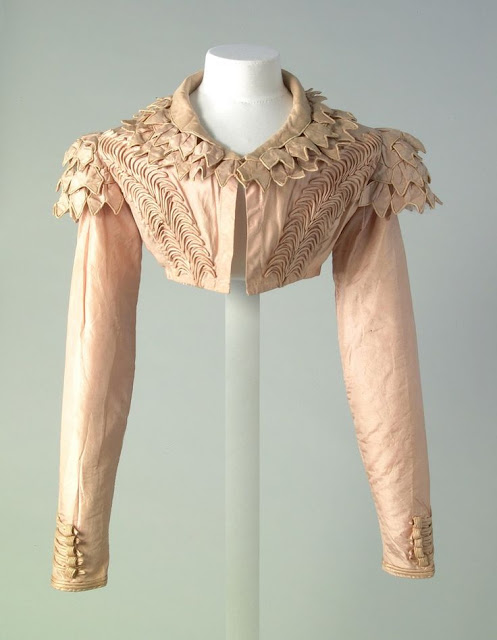 Earlier in the week I did a post about the Spencer jacket. This one should have been in that post, but I misfiled it.  It is a remarkable piece of handcraft. Made of beige silk, it has been expertly worked with triple vandyked sleeve caps, that are edged with self bias cord.  The jacket fronts have an abundance of bias cord sewn on in a palm frond pattern that accentuates the breadth of the shoulder line and diminishes the waist.  Then there is the neckline with its double vandyked frame around a rolled collar.  It's interesting to note that this Spencer, unlike most of its sisters, does not button closed, but was clearly meant to be worn open.  That small difference would mark it absolutely as a spring or summer garment. 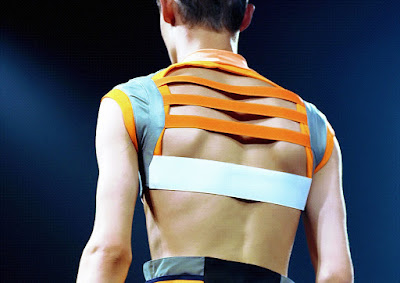 The boys of the runway are now being dressed in gear that is every bit as body conscious as the girls.  As an aspect of our changing culture, I think it's only fair that men have to deal with this finally.  The down side is that it is making men as fidgety about their bodies as women often have been.  So this leveling of the playing field that is happening is certainly coming with hidden costs, as we try to find a new way of thinking about ourselves.  Men are tormenting themselves about their appearance, and suffering in similar ways to the ways women have about this same issue. Sure, things are still skewed far to one side with regard to acceptable body image in our culture, but finally, the conversation has begun.  Whether we finally get to a place where individual body shape is no longer a subject of ridicule remains to be seen. I'm just grateful that we have at last realized it's a problem.

There were repeated dress reform movements since the middle of the 1800s.  They kept coming back till the 1960s.  After the 1960s, there were enough available options, and enough changes in how people dressed that most of the worst problems could be avoided.  Corsets, overly hot underclothes, tight, stiff collars and the like all became relegated to the sidelines.  They could still be used by those who preferred them, but it was no longer an absolute.  This gown is a reform garment from 1908, when corseting was still a requirement, and the amount of underclothes considered normal amounted to multiple layers.  The movement wanted to both address the comfort issue, but also wanted to change how we decorated our clothes sine it was often the case the women's clothing was so overburdened with furbelows that clothes were almost impossible to launder, and store.  Plus, the fragility of the decorations hampered movement.  It's interesting that this gown predicts the silhouette that would become popular in just a few years.  Tighten the cut under the bust, and this becomes a fashionable dress from 1912. 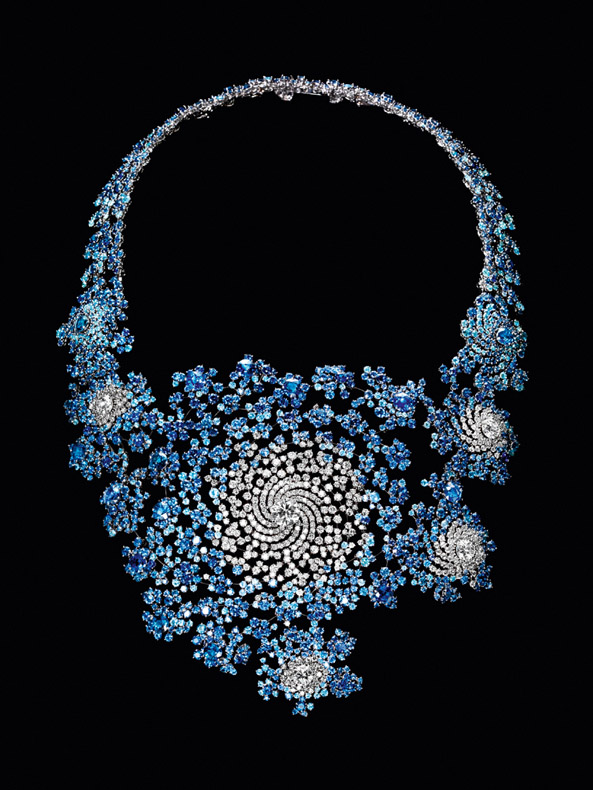 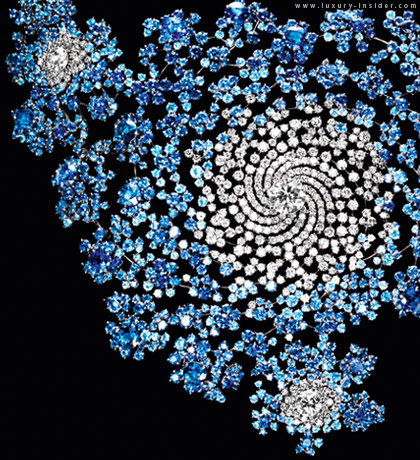 It just wouldn't be a Scatter post without a piece of bling to brighten your day.  This amazing piece is the design work of Marc Newson for Boucheron.  It was done in 2009 and required 2000 diamonds and sapphires, and an amazing 1500 hours to complete.  The fractal inspired, one of a kind piece is named Julia, after Gaston Julia, the mathematician who discovered the formula for graphing fractals.  Science, inspiring, craft, resulting in art.

Well, that's going to do it for this week's Scatter.  So scatter yourselves to the world and have some fun!
Posted by Paul G. Ellis at 4:06 AM