I'm going to do something different for me here and inaugurate a post style I will call Scatter.  This is going to be an ongoing thing.  Every once in a while I am going to just post a mess of images of things that intrigue me for one reason or another, rather in the tumblr style of things.  In each case I will tell you my thoughts about it, why it appeals to me.  Feel free to add your commentary! 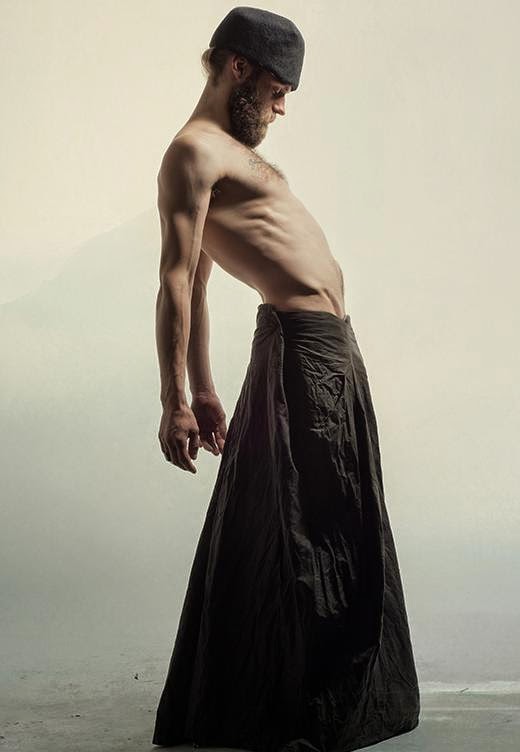 Mkay, so I love the hat. I really do. Something about the slight declination of the crown towards the back, plus its reference to a cloche hat I find very appealing. Second, Though we have toyed with skirts for men, full length skirts have stayed off the table. This one is perfectly suited to the model, hat and pose.  In my youth, when I collected antique clothes I had in my collection a gunmetal silk taffeta skirt and bustle from an 1890s dress, and I occasionally put that skirt on in the apartment.  The feel of it, and the line it created, I will never forget.  Also, the model is a babe. (at least to me he is) 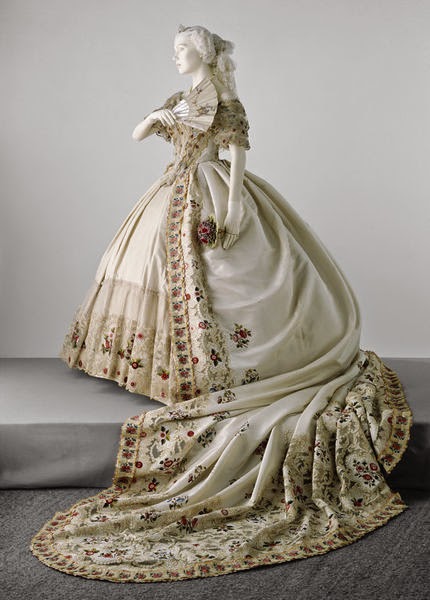 This is a court dress from the 1860s. I love this garment unreservedly.  The proportions, decorations and workmanship are without flaw in any respect.  And as an image of untrammeled romance, it is perfect.  The princess heroine of some forgotten Victorian novel would have worn this. Yep. I am waxing ridiculously romantic.  Sue me. 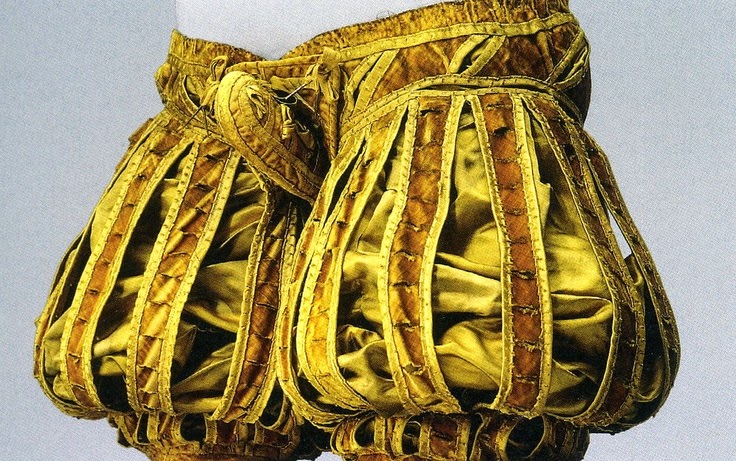 I love this cause its a perfect example of two things. First the totally weird fashion for codpieces that existed for over a century in Europe.  Men must have felt threatened in some way if they needed to assert their masculinity so much in what was already a male dominated society.  I also love this for the example of slashing it presents.  Not only are the velvet panes of the trunk hose slashed, but there are tiny slashes even on the codpiece.  And the sheer complexity of the garment itself is amazing. This was only ONE piece of a man's clothing. Whew. 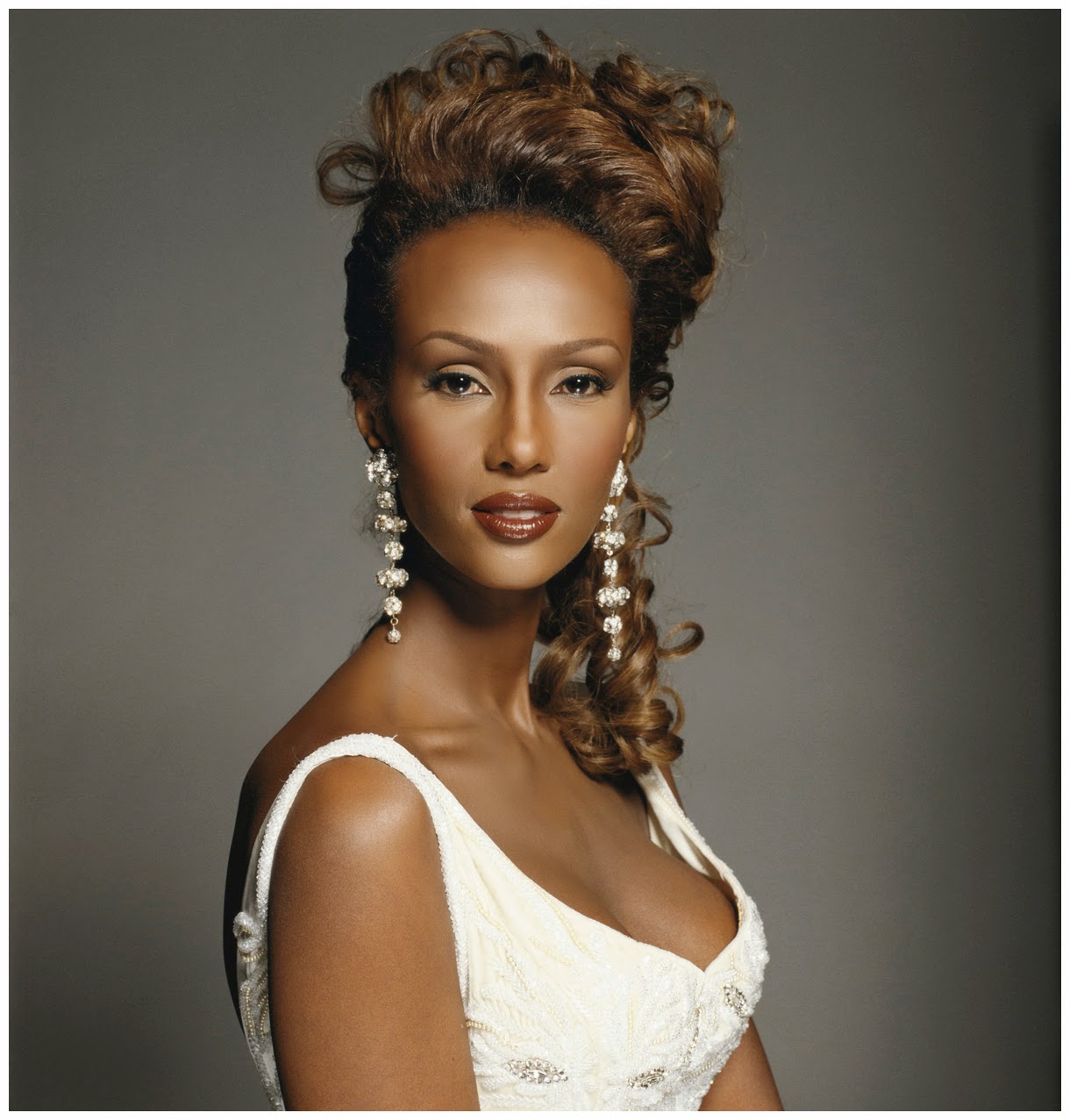 Iman.  Certainly one of the singularly most lovely women, pretty much ever.  Also, smart,  classy and married to one of the arguably most brilliant performers of our time.  I post her because she reminds me of a woman named Claire I used to wait on where I work. She was also Somalian, and was/is married to a handsome red headed Irish fella named Ian who shopped there too.  They had eventually, a son named Ben, who was without question the most exotic child I've clapped eyes on.  Mom's stunning perfect complexion, and Dad's red hair and green eyes. 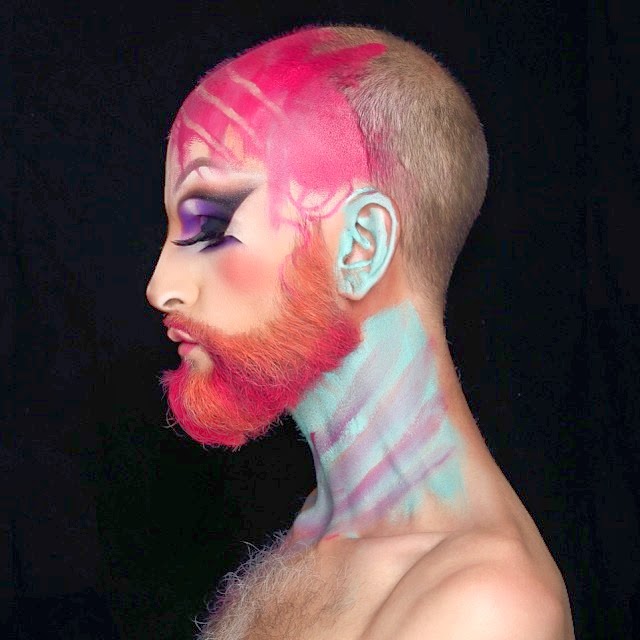 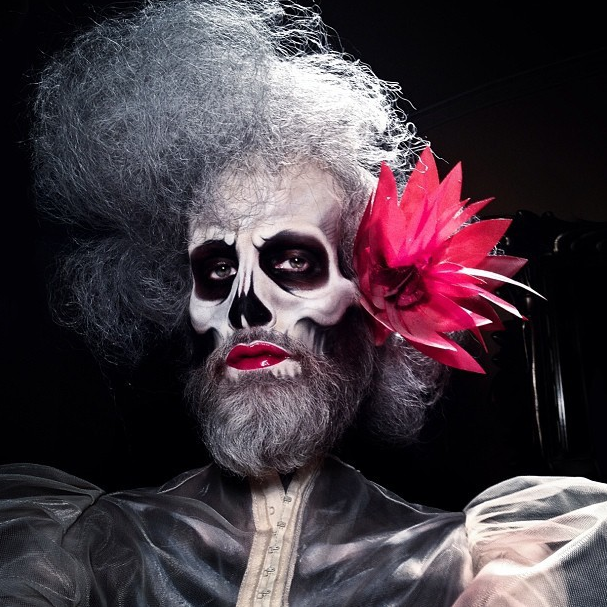 Mathu Andersen is a sometime model, cross dresser, actor and general bon vivant.  He frequently lets his amazing features be morphed in the most startling ways by make up artists.  These two images are particularly intriguing to me for the juxtaposition they create between beauty and horror. Plus the sheer technical skill of the make up artists is just plain jaw dropping. 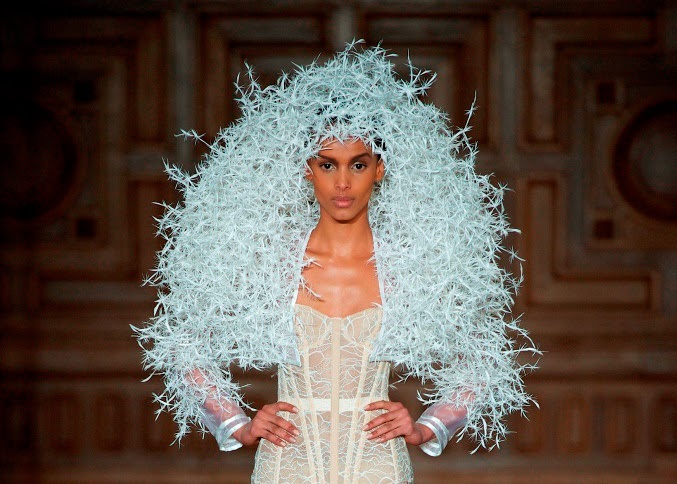 Serkan Cura loves, just plain LOVES working with feathers.  This strange branched cape/cowl garment is an amazing piece of sculpture and allows the wearers face to be framed beautifully.  Real world adaptable?  Nope, not a chance.  Wonderful fantasy?  Sure thing. 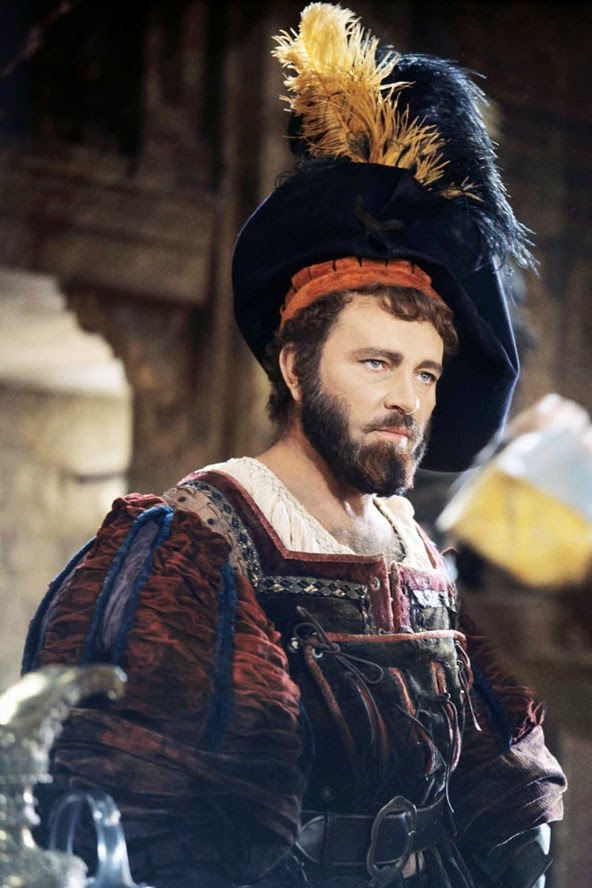 Richard Burton costumed as Petruchhio in Zeffirelli's production of "The Taming of the Shrew". Rarely has a film costumer gotten every detail right.  In the play there is a long description of Petruchhio's pictured outfit, and this costume recreates every single aspect of it.  Bravo to Danilo Donati!  Elizabeth Taylor's costumes in the film are also some of the best things done for her in terms of presenting character.  Only her role in "Who's Afraid of Virginia Wolfe?" was better costumed. 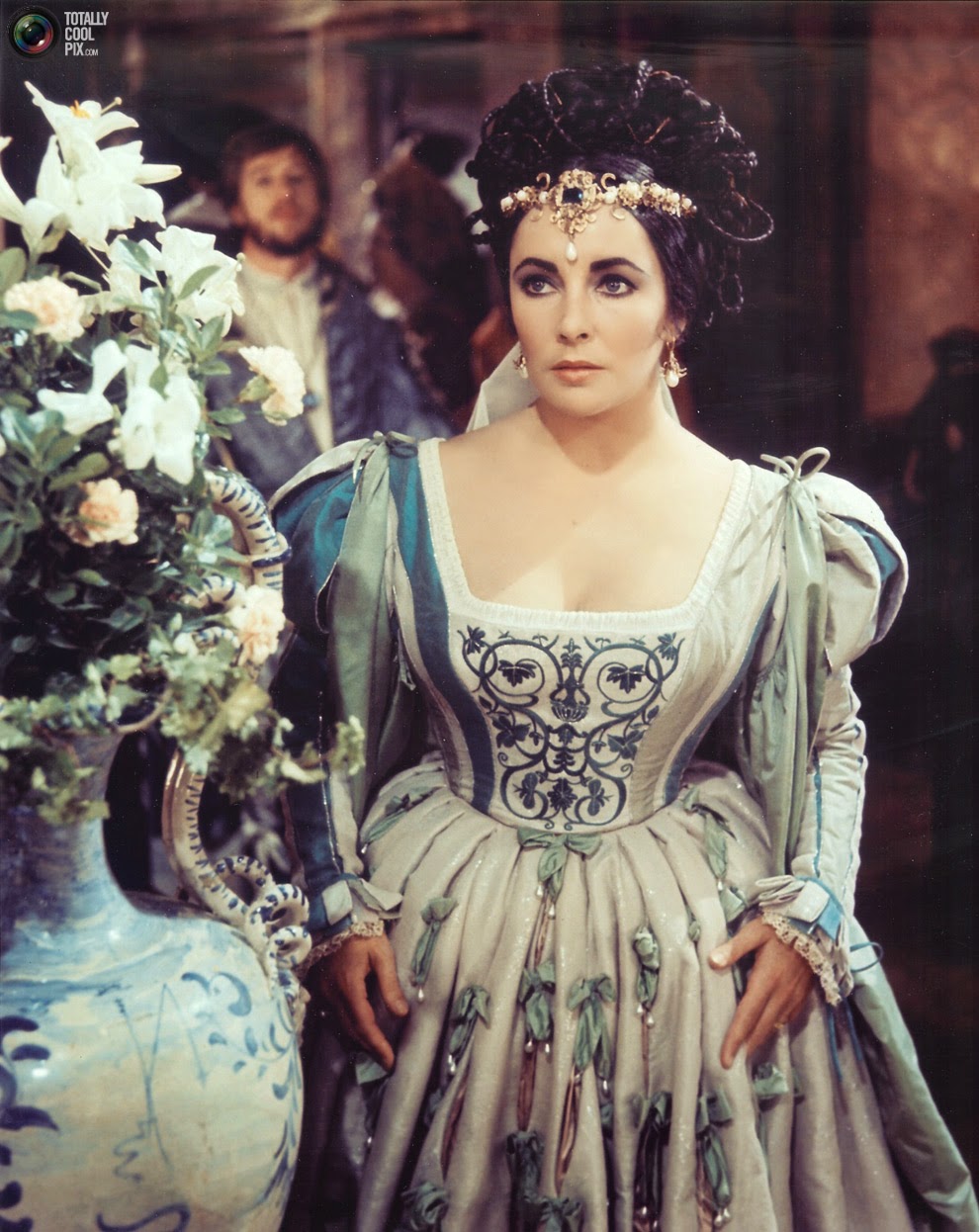 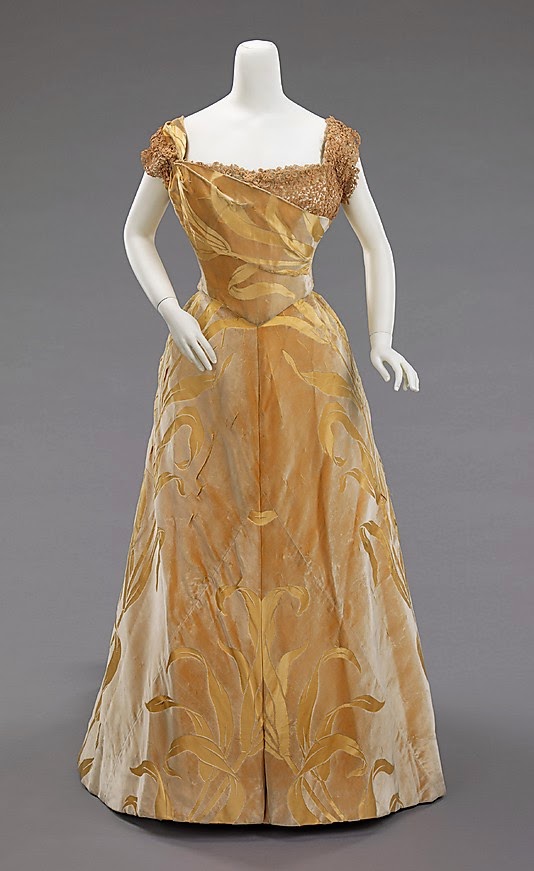 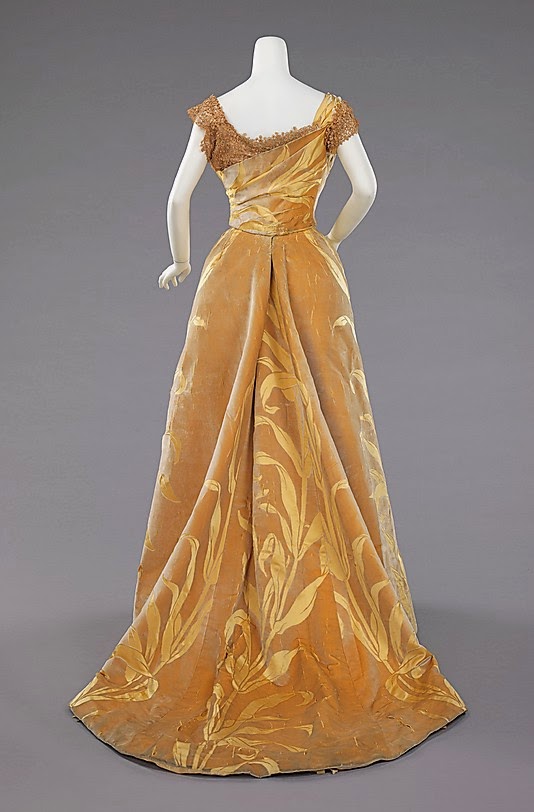 This 1899 ball gown from the House of Worth. I love this because at a time when over-indulgences of every sort were being lavished sartorially all over women, this Worth gown stands out in its real simplicity of line and execution.  The over-scaled brocade fabric does most of the lifting here, with only the asymmetrical bodice and small amount of re-embroidered lace to give it extra appeal.  Surprisingly lean and mean for its day.


So that's all for this edition of Scatter.
Let me know what you think!