There are so many different things that get my attention, and so many reasons that they do, that this is really the only way I have to share a lot of it with you all.
For the first image, this pair of fellows from Ashir.  What I like about this is not just the whole men is skirts thing of which I have spoken so often, but the interaction of garments of different cultures. Both men are wearing traditional clothes of their region from the waist down, but from the waist up, excepting their head gear they are wearing modern western clothing. Next up, from the design mind of Paco Rabanne this mini-dress made entirely of iridescent plastic discs, held together with chain links.  I love the play of light over the discs, and the reference to chain mail armor that was at the time a brand new thing in women's wear. 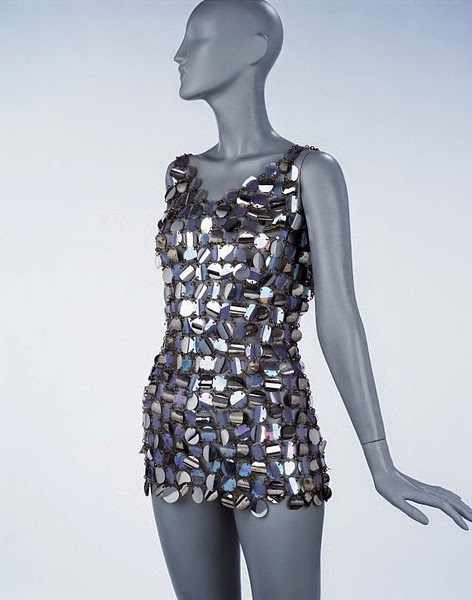 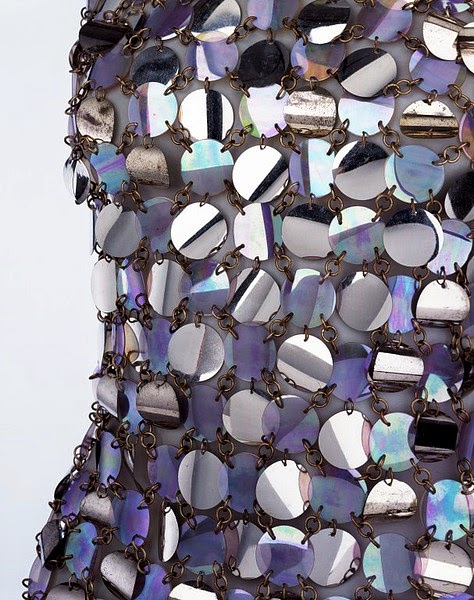 George Barbier is one of my favorite illustrators.  This image is one he did to advertize a 1914 Ballet Russes' production of Salome with dancer Tamara Karsavina in the title role.  I love the graphic qualities of the image, the sparing use of color, and the frankly desirous look on the servant on the far left. 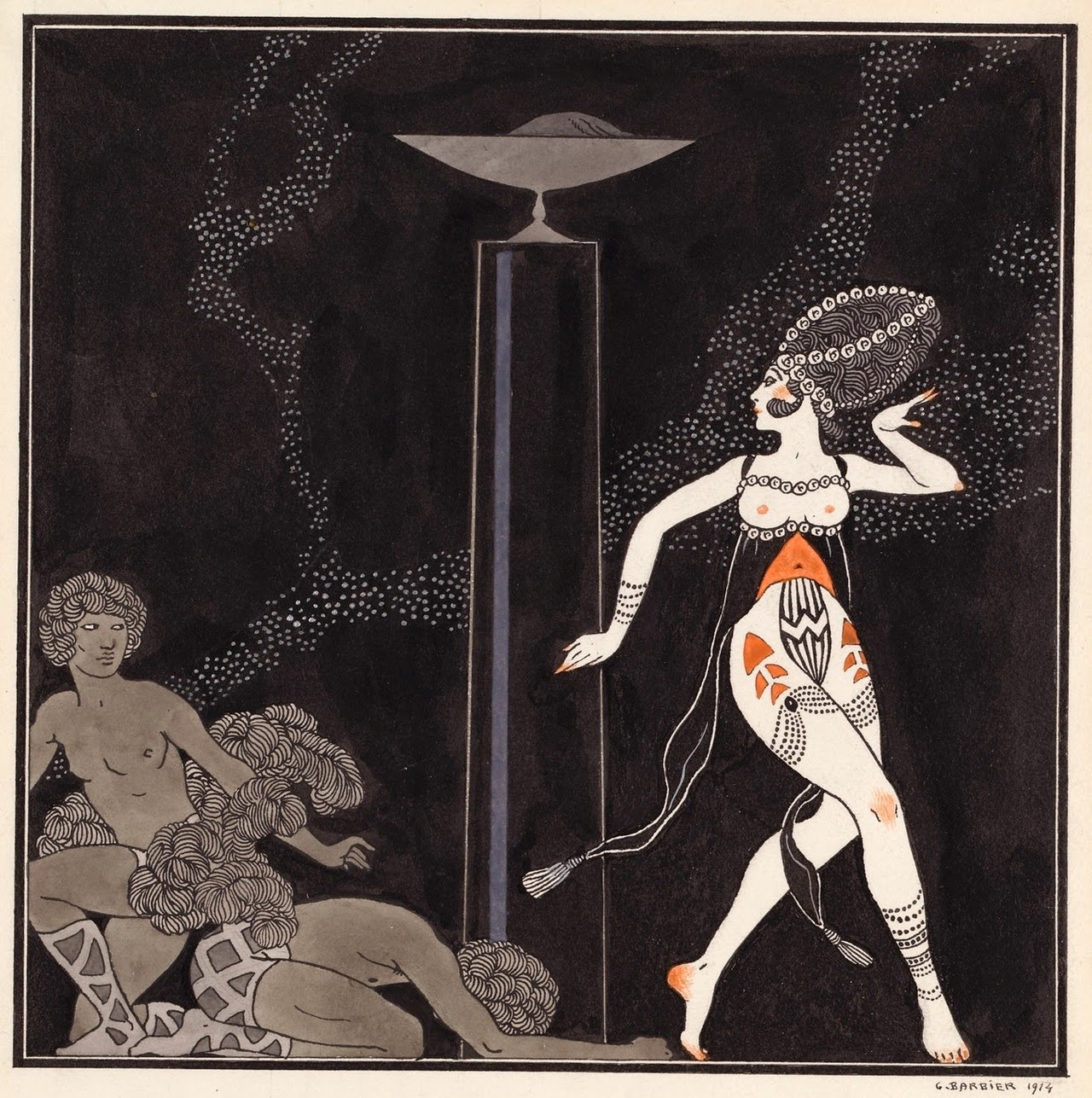 These Oliver Sweeney shoes. Shoe lust, pure and simple. Me wants them. 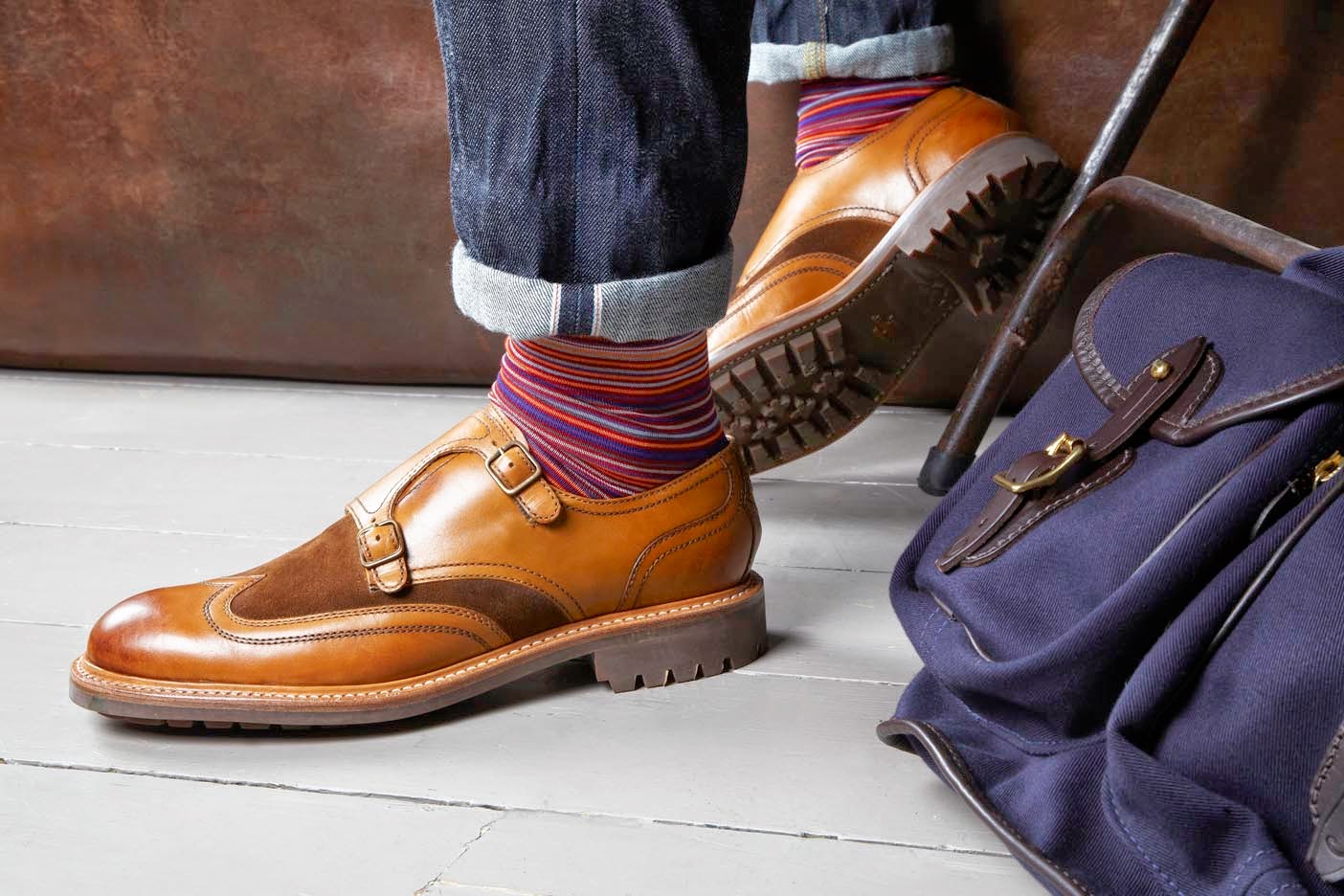 You know me and old Mr Worth. I can't resist his stuff. This is a court dress made for the Russian court, and it is a flat out stunner.   The under-skirt is of silk moire done in a very large scale repeat of the moire pattern. The over-dress is in an amazingly deep shade of green silk velvet with a border of silk plush in the same color and abundant silver thread and bullion embroidery.  Do I even need to tell you why I love it?  Its magnificent in every detail. 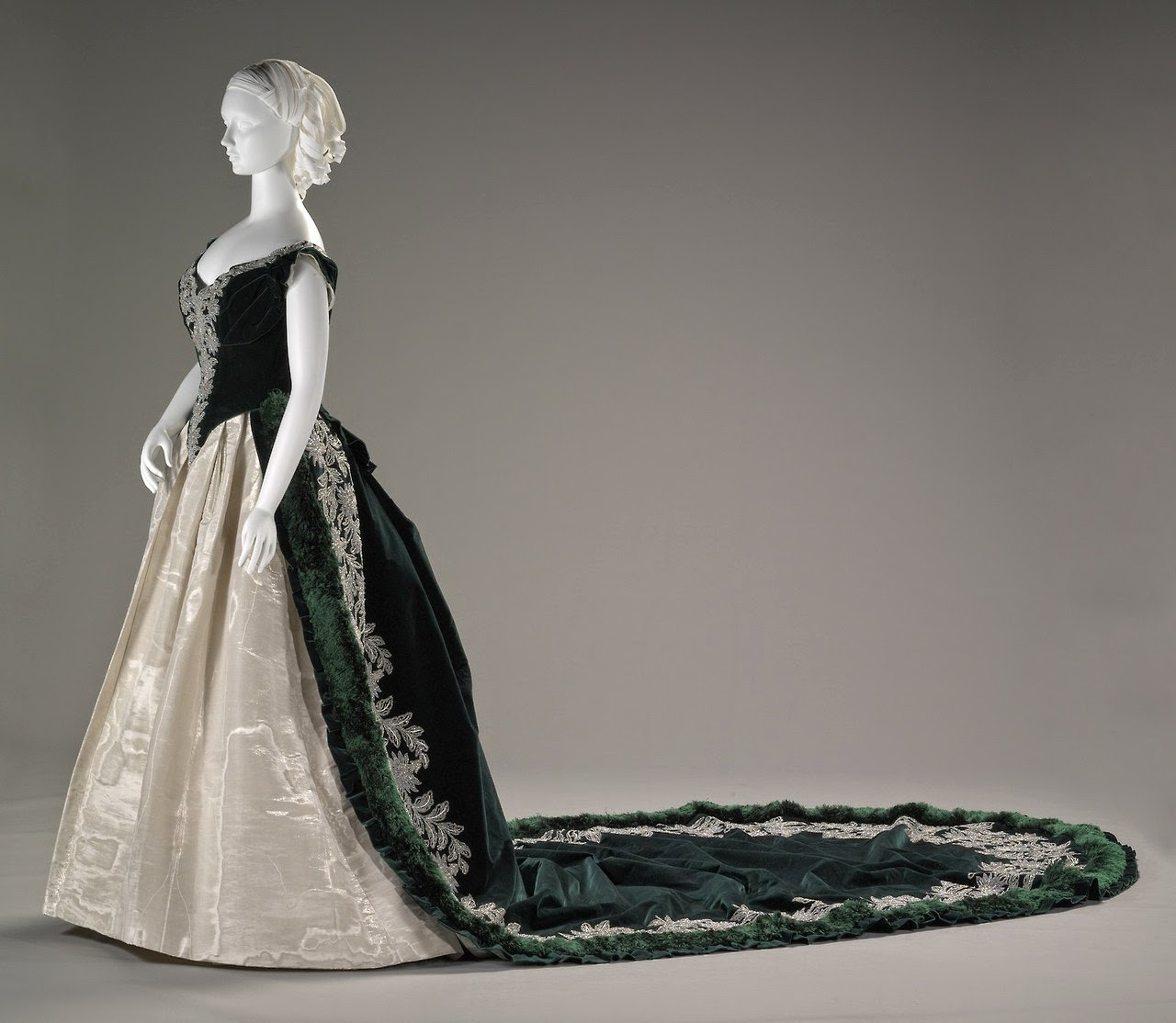 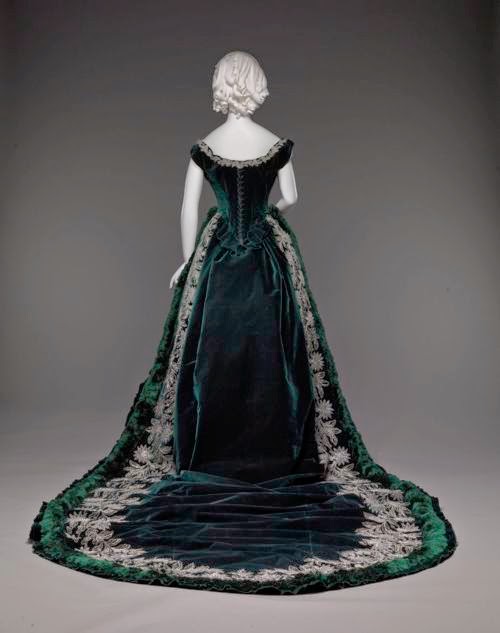 This is a coat design by avant garde designer Kay Kwok. I have no idea what the material is, but the way light moves over it is hypnotic.  Only a very few people would have the moxie for this one. Its very nearly devouring the model; but love it, I do. 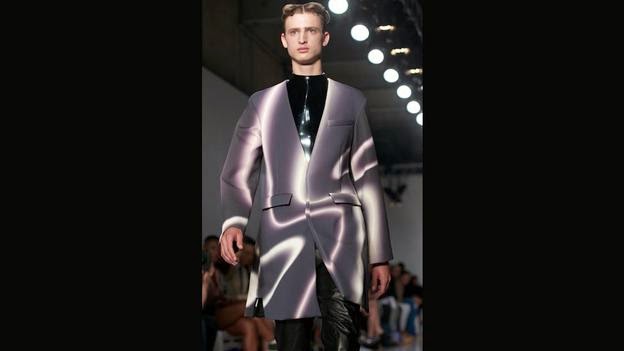 From Yohji Yamamoto's Fall 2014 collection, this look. which I find amusing and interesting.  The coat is held together along the major structural seams with cording, recalling the garments of the Renaissance, though in shape it owes more to the American west. I also like the tunic coat underneath, and the general proportions of the whole ensemble. Okay, so I could live without the hat, but that's a quibble. 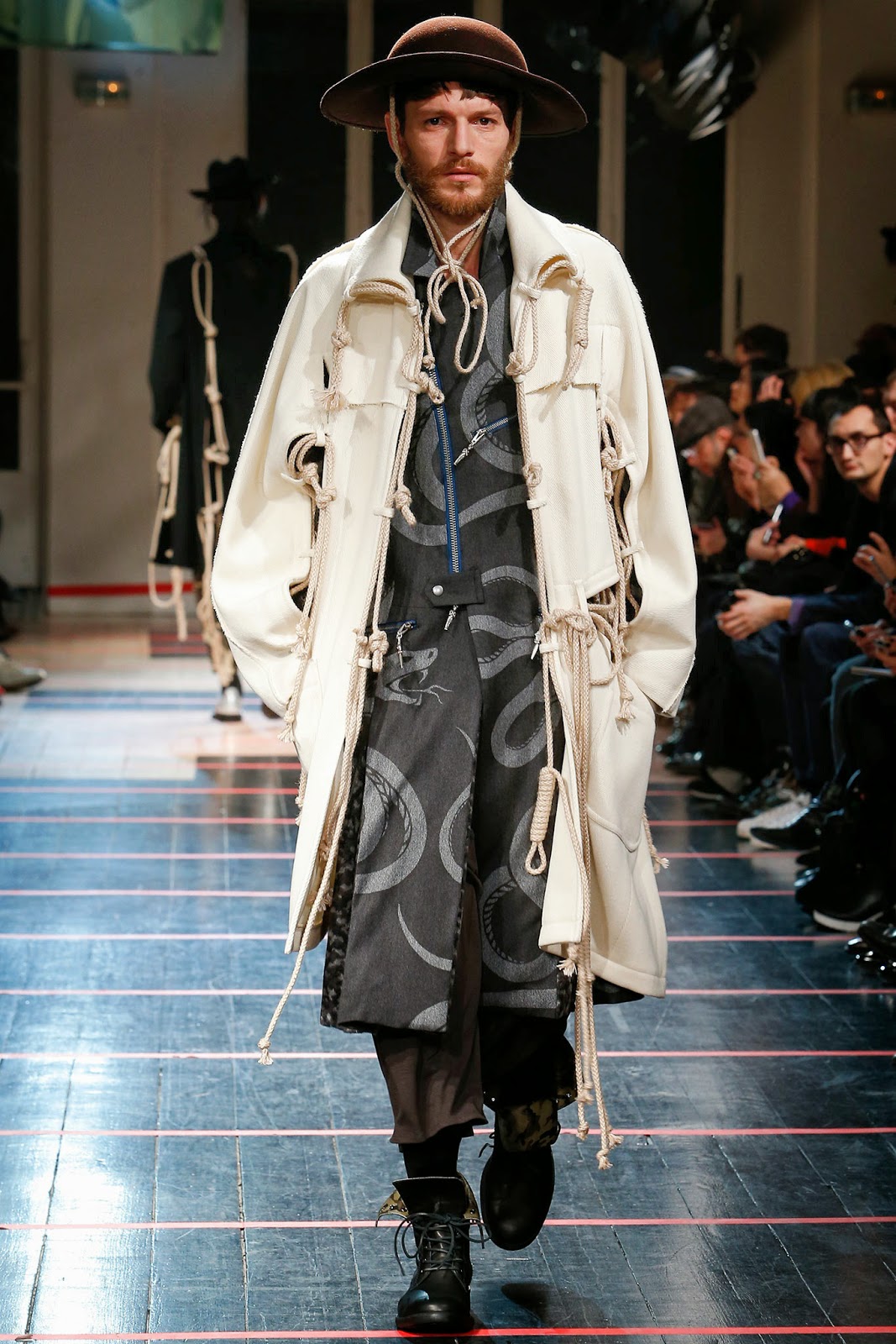 Finally, this detail shot of a Robe al Anglaise in butter yellow silk, and silver thread brocade, heavily decorated with silver lace and silver guimp.  This dress would have been used for the highest of court functions, and no doubt cost a small fortune. I wonder if the dressmaker was ever actually paid for their work? So often they weren't. 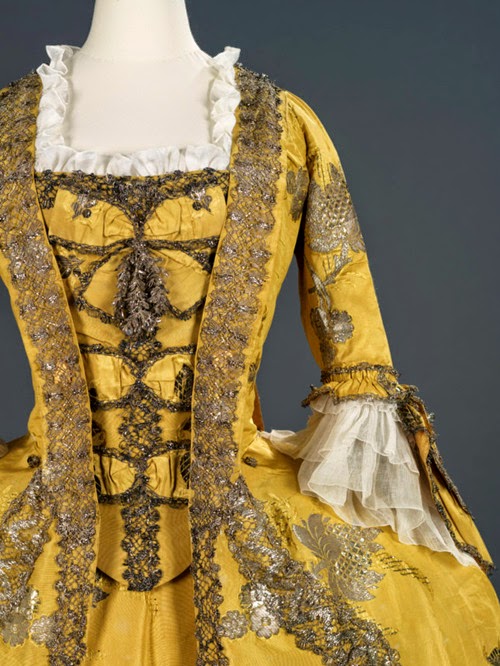 So that's it for this edition of Scatter.  Have a Grand Day Out!