Here we are again at Scattertime.  The week sure does zip by, no?  This week's grouping sure does cover some ground, so bear with me, please.  Everything does have a point.  I only hope you can see that point with me.  So, let's get to it! 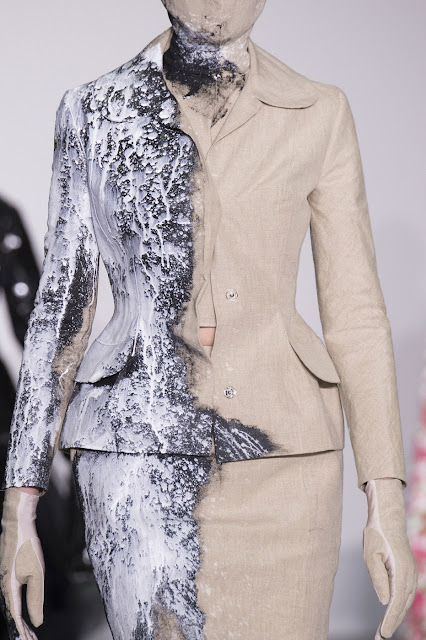 This detail image is of a design by Central Saint Martins that falls into the category of social commentary and satire.  On the one hand we have old style shaping in the structure of the suit, the jacket of which strongly resembles work done by Dior in the 1940s. In form it is essentially a classic mid century woman's suit.  Then we get to the manner of its decoration, which looks as though the model was splashed with paint and road dirt by a speeding vehicle.  The interaction of these two things, one serene and understated, and the other random, perhaps even a touch violent, call to my mind the kind of profound tension we are under in this complex age we live in.  Perhaps this is a central part of why clothing presented in this way gets so universally slammed in the real world. It challenges us too much to look at things we would rather not consider. 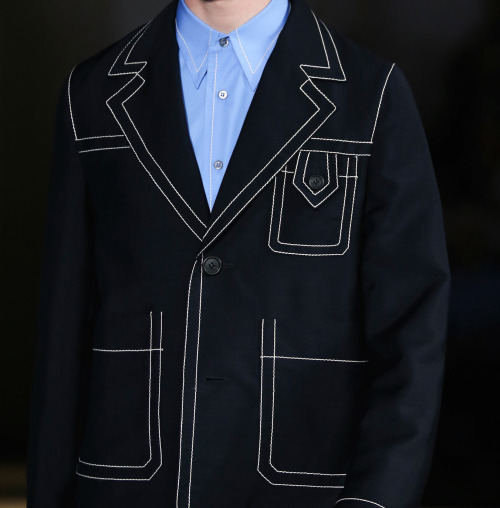 While I'm certain the intent of this jacket was not some sort of deliberate commentary, it makes a comment or two in any case.  Of course it is loudly proclaiming the details of its construction.  By expanding the scale, however, the comment made takes on a cheeky edge. It becomes something in the nature of a jest.  We are being toyed with, gently.   The success or failure of such a design rests on two things.  Scale, by which I mean getting the expansion of these detail exactly right.  And finish, since bad construction would erase the entire point of the piece. 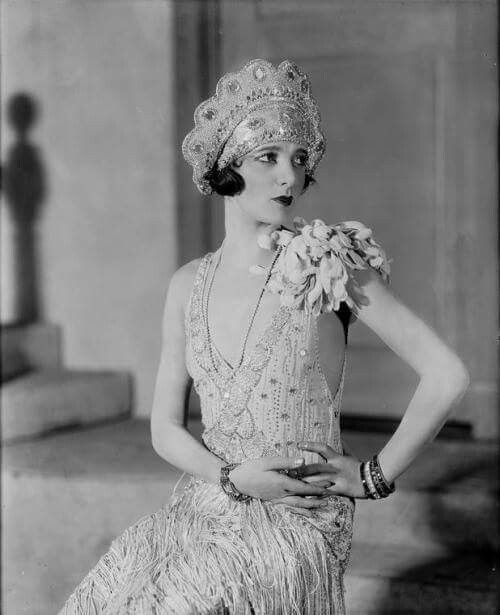 This is Gertrude Lawrence. Say hello to the people, Gertie. I found this image of her arresting, and wanted to share it.  Her costume, (and I'm assuming it's a costume due to the scale of her headdress), conforms to most of the common points of the 1920s styles.  The dress is a sleeveless chemise.  The surface of the dress is heavily worked with beads and embroidery. The skirt is covered in layered fringe, so it would be exciting to watch in motion. There is the requisite long rope of beads around her neck, and the multiple bracelets.  And finally, her headdress which covers the forehead is an often repeated look.  Everything is right out of the 1920s style book.  Just don't go looking at this and thinking that real humans looked like this when out at night. (grin) 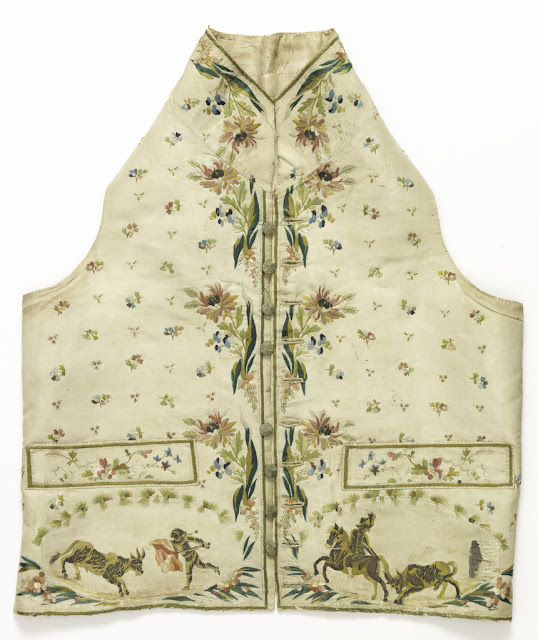 Next up, a gent's waistcoat of the 1790s.  One of the fashions that became popular as the century drew to its close was the inclusion of decorative work on waistcoats that showed scenes of people, rather than the flowers and fruits that had dominated the design work previously.  This waistcoat has two images of bullfighters engaged in their sport.  What makes this especially interesting is that the scenes in question were embroidered and attached later.  Expanding the image you can see clearly that both are patches that were added to the existing garment.  It is obvious then, that this waistcoat was remade in a newer style.  The original was probably completely picked apart. The body was re-cut.  The standing collar was added, and the oval appliques of the bullfighters slapped on.  I say slapped on because little care was given to placement. The floral border on the bottom is just covered over without consideration.  I love things like this where we get to see the story of a garment expressed in its structure.

Here's something I'd never seen until a few days ago.  Cristobal Balenciaga was and is one of my design gods.  His fiercely edited work is amazingly contemporary looking even now, and he inspired a great many of the most important designers of the 20th century.  People like Charles James, Andre Courreges, and Oscar De La Renta all owe a good deal to his seminal work.  This suit is one of the very first things he designed and made as a young designer.  Created in 1912, and worn by Salvadora Egana Balenciaga, it already has the kind of pared down approach that his work would maintain and experiment with his entire career.  As well, the choice of black cloque' material is one he would return to many times in the future.  It's interesting to me to see the very beginning of such a distinguished creative career. 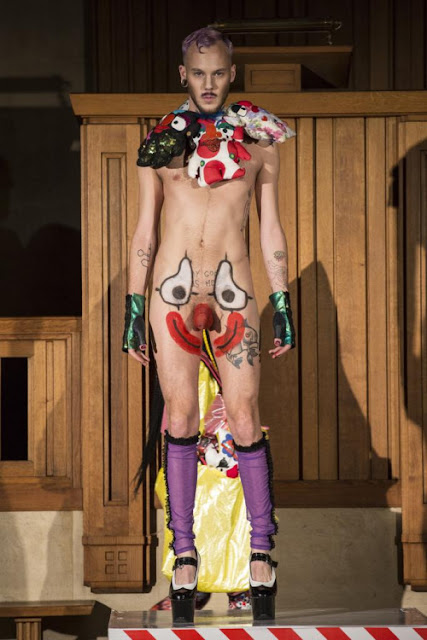 And now, a journey to Absurdistan. Yes, I do have a point to make here.  Sure, this is entirely wacky, has nothing whatever to do with real world clothing, and isn't even very well constructed, (what there is of it).  But, what Bas Kosters is about as a designer is largely poking people in the eye. His work, (and this is by no means the most wild) challenges the viewer in multiple ways. First we are nearly commanded to not take things too seriously.  Second, the very existence of fashion is being lampooned for its often more ridiculous, and frivolous aspects. And third we are getting some loud commentary about body image and traditional masculinity. Is this appealing in any sort of traditional way?  No, not really.  It doesn't adhere to any of our conventions of proportion, scale or interaction of elements.  That said, I still applaud designers like Kosters for being out there doing what they do, and giving us all a chance to think a bit. 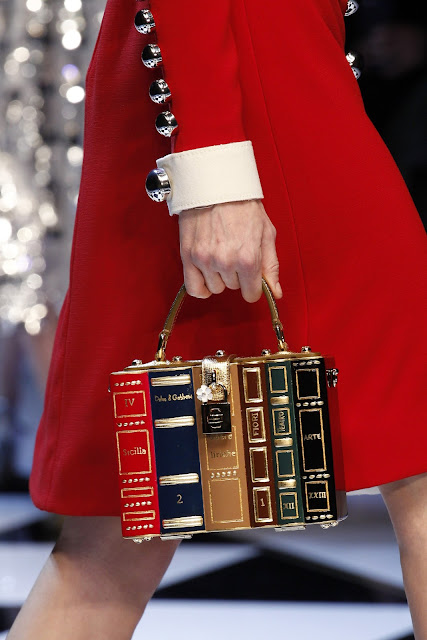 Surrealism. I love it.  And I love that it has returned to design in many areas, not the least of them, apparel and accessories.  Accessories have most often been the place in Attire where surrealism comes out to play.  This Dolce & Gabbana handbag is a great example.  When is a stack of books not a stack of books?  When you can carry your cell and your wallet in them. Sure an item like this is crazy expensive, but such things can be both made oneself, or found a lower price levels, so it doesn't have to be only the province of the advantaged. 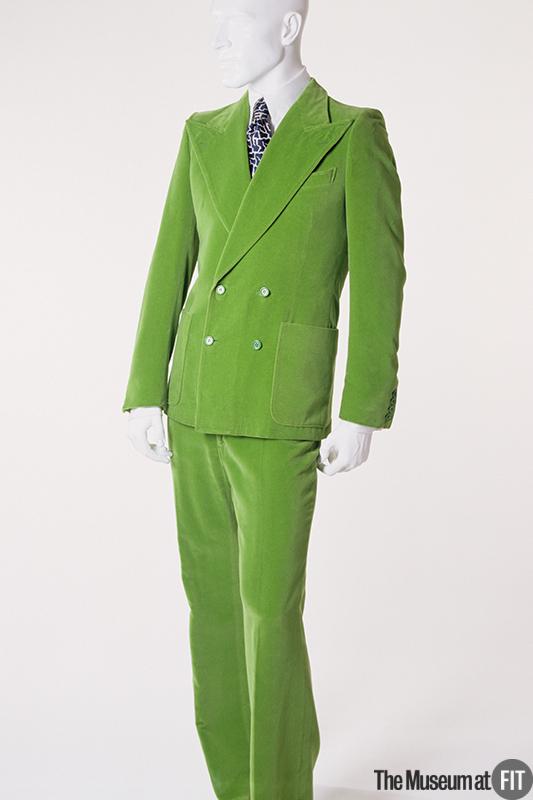 Oh my, those lapels!  You've seen me go on about the lack of color in menswear. This suit, part of the Museum at FIT, is by Yves Saint Laurent and was designed in 1972, (hence the enormous lapels).  This was just at the end point of the Peacock Revolution where the primacy of traditional menswear was got a serious challenge.  The cut of the suit is easy to wear and flattering to a wide range of body types.  And that amazing lime green velours!   Yes, please. 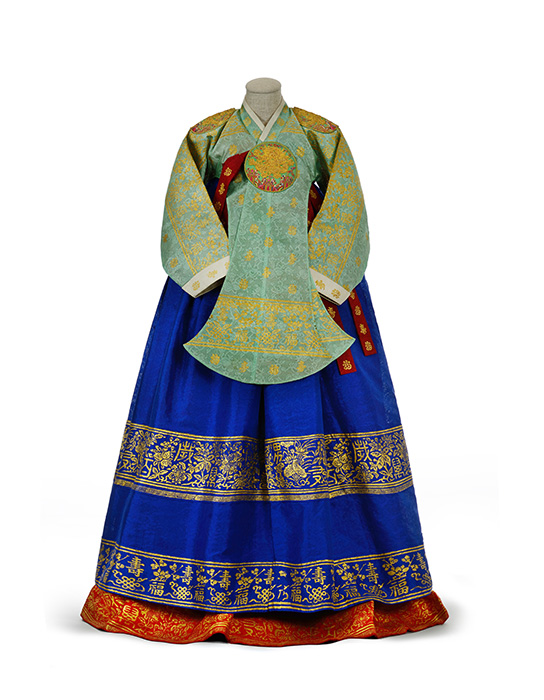 This ceremonial costume is from Korea in the 1920s.  I love the combination of textile patterns and colors.  In the western world we have become so fearful of pattern mixing.  It always pleases me to see it done with such energy and delight.  The other thing I find interesting is how often, even in places where the climate is quite warm,  ceremonial garb is voluminous and layered.  I almost included this in the post on power and discomfort, but I felt it didn't quite express what I wanted.  That said, I think this is just plain glorious.  More gorgeous human creativity on display. 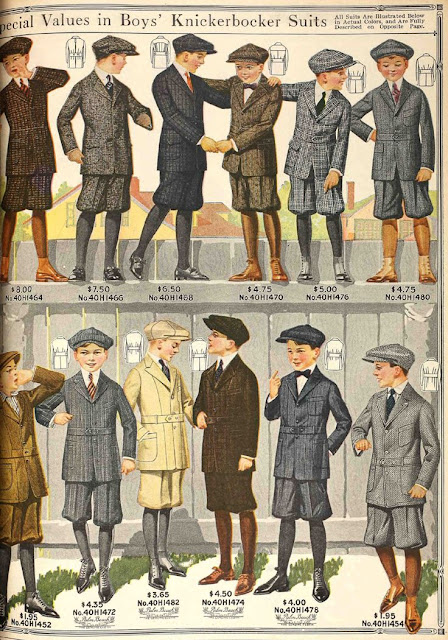 The knickerbocker suit was the choice for nearly all young lads in the later 1800s and earlier 1900s.  This 1917 Sears catalog page shows a range of the suits available for boys.  Wool serge, tweed, canvas, and twill are all in evidence here.  The jacket styles mostly copy gentlemen's sporting coats, with their inset belts.  Only three of the suits, (the upper left ones), are cut more like men's dress clothing.  And then there is the issue of price.  the range is from $1.95 to $8.00.  While we would think of this as absurdly inexpensive, in 1917 one dollar was worth the equivalent of just over 20 dollars today.  So the least expensive of these suits was about $40 in current terms and the most expensive, over $160.  We must also understand that wages were significantly different.  40 dollars would have been more than a weeks wages to most people.  The other thing to think on is that the construction of these suits was very likely quite good. Better than you could hope for at Target or H&M today. 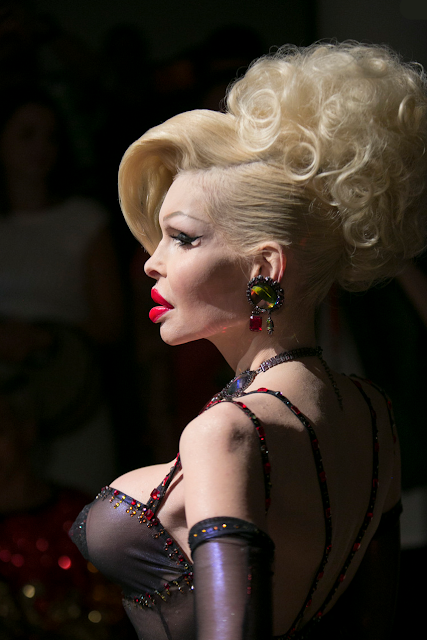 Today, the concept of body modification as a method of self expression has reached levels that we never dreamed were possible in decades past.  Virtually any conception we have of our fantasy selves can be made real and permanent, if we have both the internal commitment, and the price. What this desire for ultimate alteration says about us as a culture is profound.  Sometimes it seems to be a very dark thing about us, but it is also a sublime thing. We aspire always to be more than we are, different from the herd around us.  Like any of our greatest assets it can also be our downfall.  But it is in this relentless striving that we find our ability to succeed eventually.  We stumble often, but we always get up, and continue.  To me, at least, this is wondrous in us. 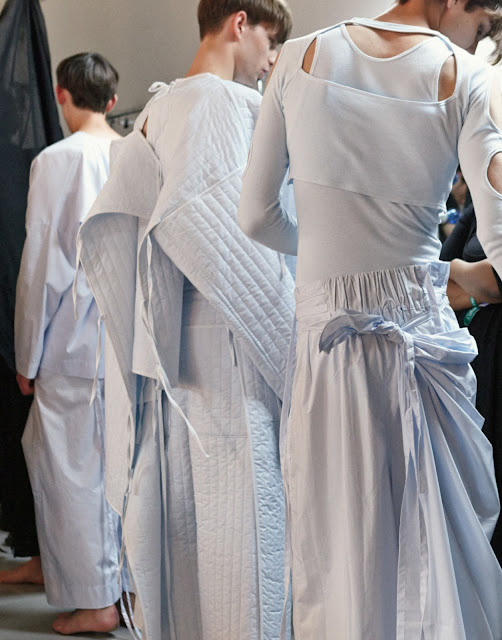 This backstage shot is from a Craig Green runway, S/S 2015.  The all white presentation allows all the structure to take center stage, which I appreciate.  it makes it possible to envision each thing made up in other colors or patterns.  I also love that Mr Green is not bound by menswear tradition, but instead is charting other territory.  Bravo, Sir.  Sure, it's pretty out there for all but the most avant garde folk, still I love it all.

And that, my friends is the Scatter for this week.  I hope you enjoyed this romp, trying as it might have been at times. But hey, part of my job here is to stretch you a bit, while I stretch myself.  Thanks!
Posted by Paul G. Ellis at 5:17 AM