Welcome to my brain pan.  It's an oft times confused place, full of oddments and ephemera, but it's all I've got to work with.  This week's Scatter is about to begin, so get ready to dive in and muck about among all the random stuff in my pointy little head. 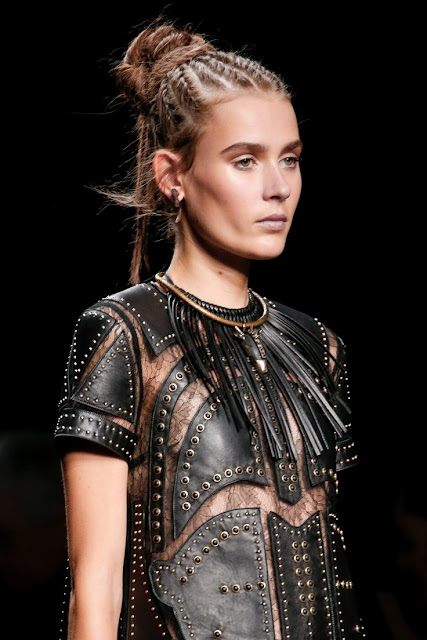 This image is from the most recent Valentino runway collection.  What interests me here is the interaction between the fragility of the lace that forms the base of this garment, and the stiff leather panels attached to it.  It becomes a sort of exploded view of plate armor.  In fact, I'm pretty sure that is the intent.  I also like that it plays with the sheer trend in an entirely non-sexual way.  Though the look is undeniably sexy in a tough customer kind of way, it is in no way sleazy, or vulgar.  I suppose my only quibble would be the comfort level of wearing an item composed of such clearly rigid leather pieces. 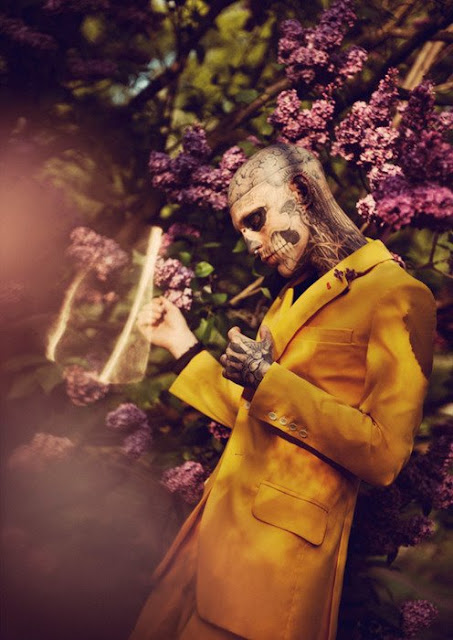 I have no idea whether this model is actually tattooed in this fashion, or whether it was created for the shoot.  It certainly is a high impact kind of ink.  And if real, it is a very loud statement about the person's feelings and opinions.  Such extreme ink is not for the shy.  And I love the profound juxtaposition of the model's romantic pose, elegant suit, and placement amongst flowers. part of what gives this even more potency is the fact that everything has been done to make us focus somewhere else, other than the tattooing, so that when we do note it, it is more startling.  It also makes me think of the extremity that some of us have been called to to make ourselves feel seen and heard in our remarkable world.  Such literally in your face tattooing, and of such a disturbing nature becomes not only a personal expression, but also a meditation on human frailty, and human folly. 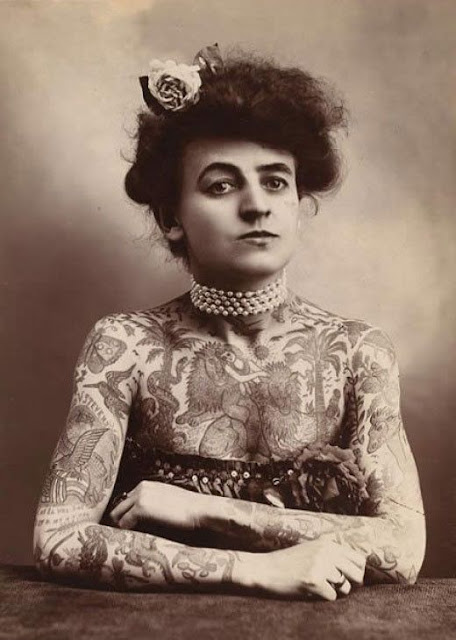 Speaking of tattoos, here's an image from 1905 of a woman with extensive ink.  It certainly was unusual for women in western culture to be tattooed, but it did happen.  What it would have meant for a woman to be so adorned was significant. She would have been excluded from polite society, even if she managed to keep them all hidden all the time.  Knowledge of their very existence would have called her social suitability into serious question.  Such social opprobrium is hard for us to understand now, since tattooing has become so socially acceptable, but a century back it would have been a serious hindrance for any woman, and for a good many men, as well. 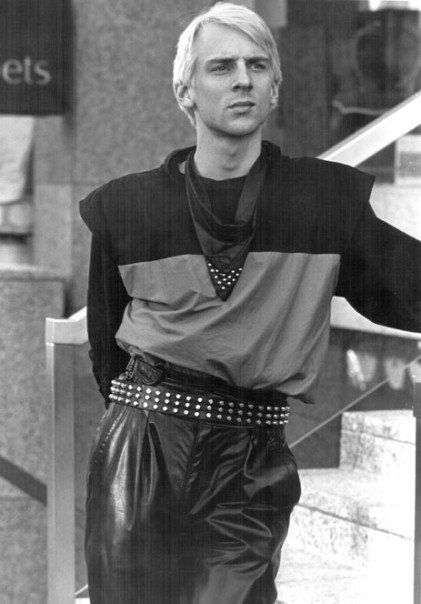 Ah the 1980s.  I remember it well.  One of the things that epitomized the decade was a sense of loose structure.  The cut of pants had loosened up, shirts and jackets had gained volume, and lost a good deal of rigidity.  For women there was a range of over-scaled, loosely fitted clothes of all sorts.  This was in direct counterpoint to the other popular look of skin tight everything.  Super tight jeans, knit tops, spandex leggings for men and women were a common sight.  But for most people it was this easier, more comfortable look that was the go to of the day.  I know I had lots of loose fit pants, and blousey shirts a couple of unstructured jackets, and even one of those leather neckerchief thingies like the model is wearing.  (In truth I still have it). 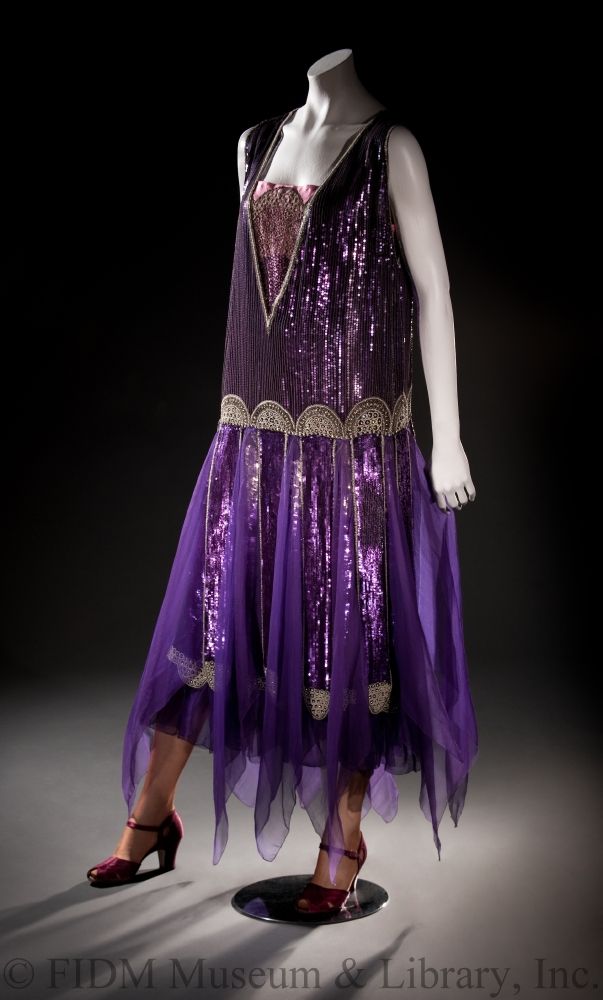 By the 1920s, when this dress was created, Paul Poiret had ceased to be an innovator in the design community, and his couture house was struggling to survive in a changing world.  That said, this is utterly delicious looking.  From the intense purple, to the choice and placement of the beadwork this is a great piece.  It's also in indicator of how things were shifting.  By 1928, when this was done, hemlines were falling, and the beginnings of that softer, more body hugging look that would dominate the entire 1930s.  The way it began was the appearance of floating, bias panels like those decorating the skirt.  So this dress is a transitional piece.  It still has the tubular chemise shape, but the hem as dropped and the square chiffon pieces refer to what is yet to come.

Here's a gentleman's coat from the 1790s.  It is the immediate precursor to the tail coat.  What had been happening for an entire century was a slow shrinkage of men's coats.  What began at 1700 as a huge, broadly cut coat that went past the knee, diminished decade by decade. First the cut began to tighten at the waist, then the hem drew up a bit and the sleeves got narrower.  Over time the coat skirt began to develop a gap in the front that widened until it developed the swallow-tailed look that we associate with the later part of the century.  By 1790, as you see, the coat skirt had completely disappeared from the front, and by the end of the century the tails would shrink still further.  So, if you look at this bit of history, you can watch the evolution of what became the modern day tail coat. 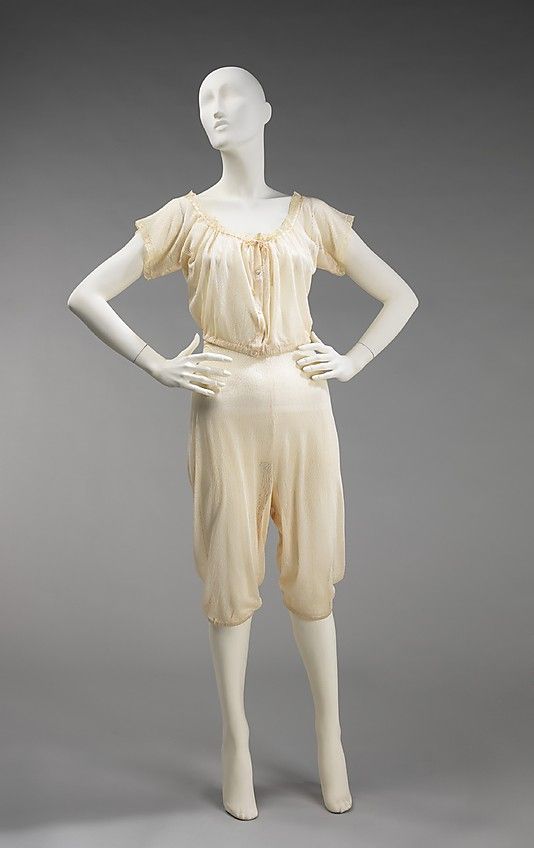 Undergarments are things that rarely survive to show us what was worn.  I suspect it's because most people discard them when their usefulness was over, since the idea of giving underclothes to someone else has unpleasant subtexts.  So the survival of this chemisette and bloomers is unusual.  The set was made by, and sold at Lord & Taylor of New York, between 1910 and 1915.  Such underclothes as these would have been a little staid, since more brief underwear was already being made and worn by the younger set.  In particular the bloomers are a mark of someone with more conservative tastes.  Made up in sheer off white silk crepe, the design is simple and straightforward.  It's an indicator that the wearer was likely a person un-fond of fuss and bother. 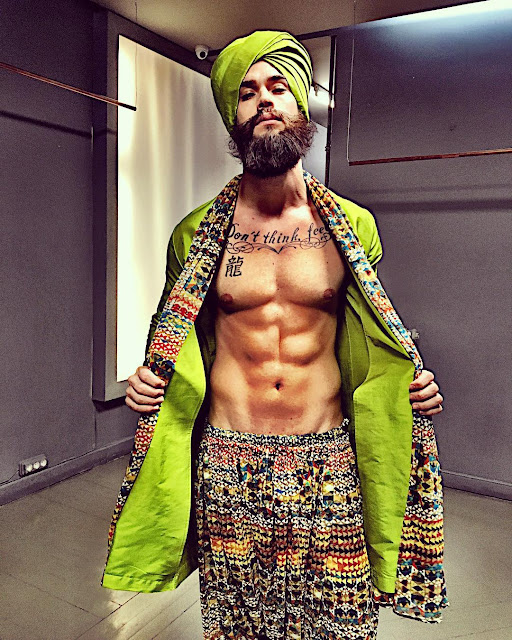 You know me, unabashed color whore. So do I like this look?  Yep, I do. Now would I wear all of this together?  No, probably not, and I certainly wouldn't go shirtless, but I love the idea of the coat. Loosely fitted and with that great combination of pattern and solid.  I don't know if those are voluminous pants or if that's a skirt. Either way, I'm on board.  And since I seem to be talking tattoos today.  "Don't think, feel." It's an interesting statement to choose to put on your body permanently. I have to wonder who this fellow is saying that to; us, or himself? 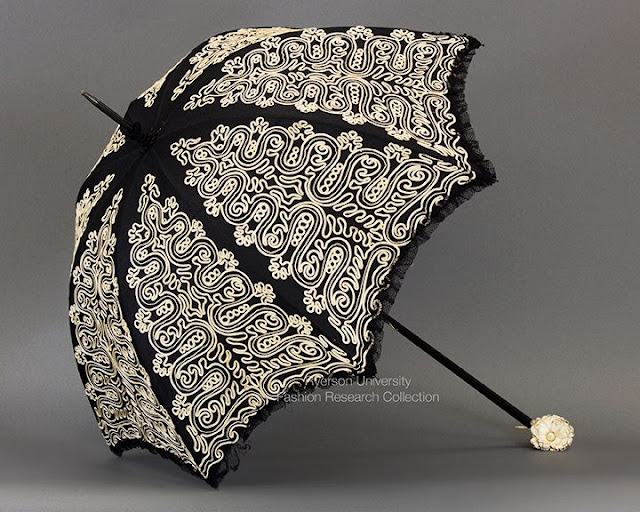 The parasol was at one time a significant piece of female iconography as important to self expression as the hand bag, the hat, and the shoes were.  They had utility beyond keeping the sun away.  They were a wonderful method of either revealing or concealing oneself from others.  There's a fellow you're interested in, why move your parasol to frame your face.  Someone you'd rather not speak to, interpose your parasol. This one is dramatic and lovely.  It's decorated over its entire surface with white cording that has been couched down, then the edge has been given a discrete frill of black lace.  This is a parasol that that would have been chosen by a woman of some elegance, and no small amount of self possession. 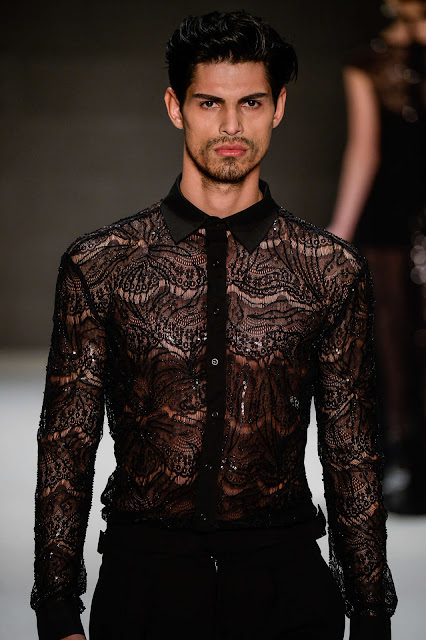 Now, if you're going to assay a lace man shirt, I think this is how it's done.  the lace has been subtly turned up with some bead work. The cut is trim, but not too tight, and the overall effect is a kind of modern take on formality that I appreciate. While it's certainly true that the majority of men aren't ready to go there, I can see this as a kind of evening dress look that could eventually catch on.  What will make it or break it is how it gets presented to the public.  In this case the designer, Affair, has chosen to keep everything else extremely simple and pulled back, allowing the shirt to do the majority of the work.  I think that's a wise choice, since it could wander off into costume, or club gear territory all too easily. 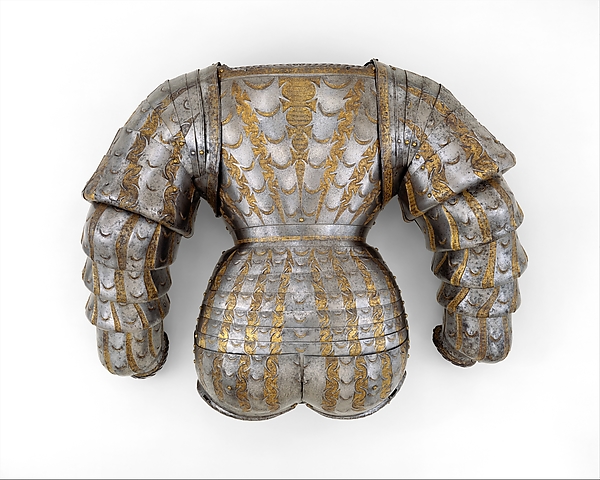 It was pretty common for wealthier knights, and nobles who did battle to have armor that was modeled after whatever the prevailing mode was for men's dress.  In this case it was the Landsknecht style that had its greatest popularity in Germany.  This suit of armor is from 1525 and it accurately chronicles what the style looked like.  The neckline is broad and straight across. The sleeves have multiple overlapped layers, and the entirety of the armor is designed to appear as though it has the extensive slashings that were one of the particular hallmarks of the Landsknecht.  I'm really struck by the ingenious usage of the style itself to facilitate the articulation of the arms.  The wearer could use this armor with relative ease, without the impression of the look diminishing.  Clever, what? 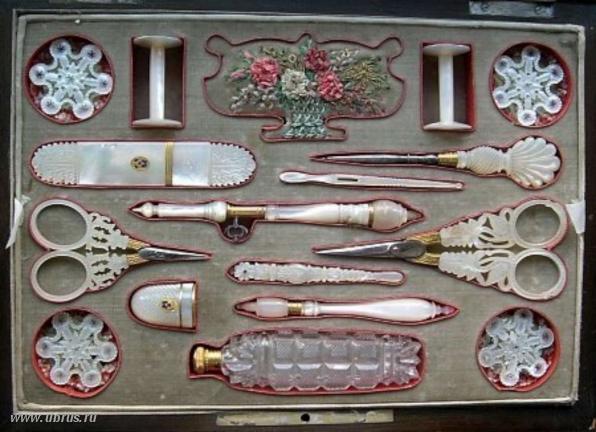 As a final entry this week something that isn't apparel, but is surely associated intimately with it.  It is referred to a la Francaise as a Coffret de Couture. Sadly, this is the largest and best image I could find, so, my apologies.  Made in 1810 in Paris, this sewing box was clearly meant for a lady of means who had little else to do with her time but chat with her friends, order servants around, and sew things of little utility.   The various implements are of mother of pearl, ivory, and rock crystal, with gilt brass accents.  Looking at the contents, this kit is meant mostly for doing various types of embroidery work, since it has a tambour hook placed in the center. (That's the piece with the key on one side for tightening the hook). I also love the complex piece of decorative ribbonwork that is at the center top of the tray. A couple of the other instruments are for that kind of work.  Both the tool with the clam shell handle, and the needle just below it were used in ribbonwork.   Most women had a sewing box, since all young girls were taught to sew.  Naturally they varied widely in their expense, and what was in them, from the blandly practical, to fanciful and frivolous, like this one.

And that,my friends is the lot for this week.  Next Saturday will be a double helping of scatter items in honor of the 100th edition.