It's going to be a beautiful day here in San Francisco, so I must perforce share some beauty, and strangeness with all of you, since those things are part and parcel of what my city is about. 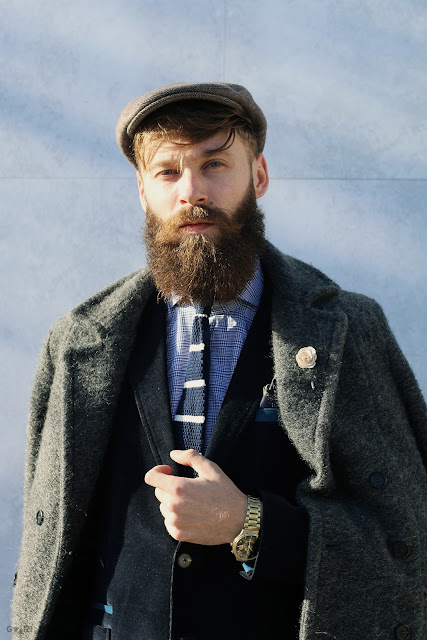 Let's ease into things this week, shall we?  First up this rather hipstery dude.  What intrigues me here is that this grouping of garments is a lot more expressive than your straight up Hipster guy apparel.  Sure he's pulling some standards into the mix, but the combination of color and texture is giving more depth to what is being said.  I'm getting considerably more than just, "I'm trendy" out of this, which is a very good thing, indeed. 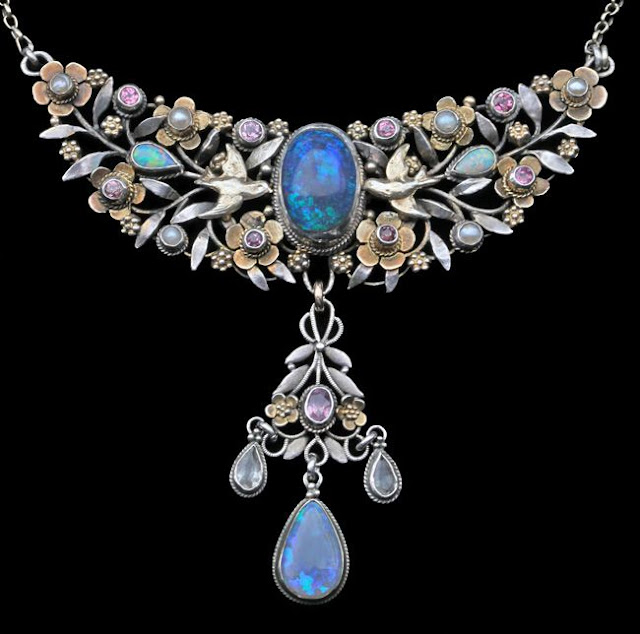 On Thursday I posted an Arts and Crafts pendant by Georgiana ( Georgie), and Arthur Gaskin of England. This necklace is from the same time, about 1900, and is as staunchly in the Arts and Crafts realm as the other piece.  What I appreciate here, aside from the superior craftsmanship, (a mainstay of the movement), is that they rely not on precious stones and fabulously rare metals, but on slightly humbler materials.  Here they are working with black opal, rock crystal and pink tourmaline, in a silver setting with enamel.  What results is a beautiful piece that is somehow warmly welcoming, rather than forbiddingly glamorous. 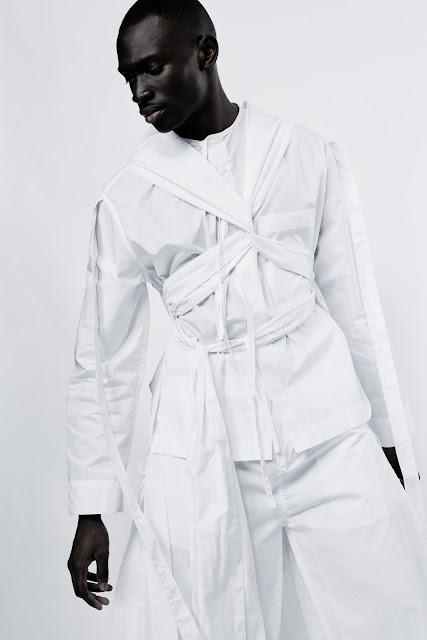 Me and my love of the experimenters.  This is an interesting exploration of wrapping and tying to create shape from a pair of blocky, large garments.  The crisp hand of the stark white cotton contributes to the eventual effect. And somehow it manages not to look like some sort of bondage garment.  Perhaps it's the unrelieved whiteness, combined with the huge volume of what looks to be a skirt with an inverse pleat that keeps it away from fetish territory.  In any case, I like the way it works, even though it would never be a player in real world Attire conversation.  I could, however see it as a club gear thing, or something for a high level art opening.

More and more often pop culture imagery is presented by designers.  We can credit Yves Saint Laurent for starting us down that path.  For over a half century now, the design community has been finding a greater amount of its inspiration from film, television, music, and of course, the internet.  This jacket by Pushbutton utilizes an anime character blown huge to take an otherwise simple and unremarkable garment and make it a blustery remark.  The wearer of a jacket like this would be hard pressed to escape the immediate assumption that they are a devotee of Japanese animation.  I also love the smartness of the design's placement.  With hands in pockets the character's hair continues, undisturbed, making the image complete. 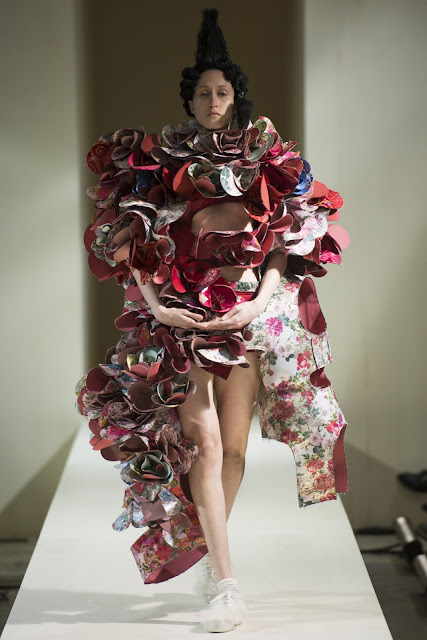 More crazy for you.  Commes des Garcons is without question one of the most out there of the avant garde design firms, routinely sending things out for review that are utterly baffling.  This is one of the more seriously outrageous of their efforts.  I am, as you all should know by now, very much in favor of the avant garde.  It's vital for us to stretch and try new things in order for the Attire language to stay facile and lively.  Sometimes the designed piece is so out of bounds that we cannot relate at all.  This doesn't mean that there might not be some small aspect of it that could be translated into something useful later.  It is only that facing a visual scream like this one, it is hard to pick out what that might be. 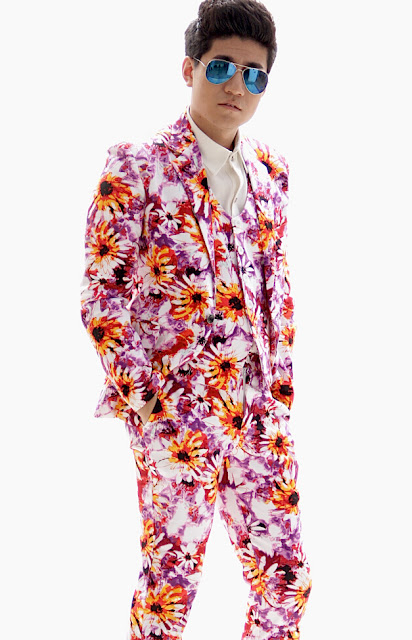 Sometimes too much of a good thing is just that.  I'm not against any of the individual pieces here.  I champion the breakaway from the old menswear traditions.  But what can happen in a situation like this, is that the body ends up being lost in the confusion of pattern that overwhelms the eye.  What makes this a more extreme reaction is that the nature of the pattern is such that it really cannot be matched, so every  structural detail adds to the level of confusion by breaking the surface further.  Our eye doesn't know where to go, so it retreats to the safer distance of seeing the pattern as a single mass. 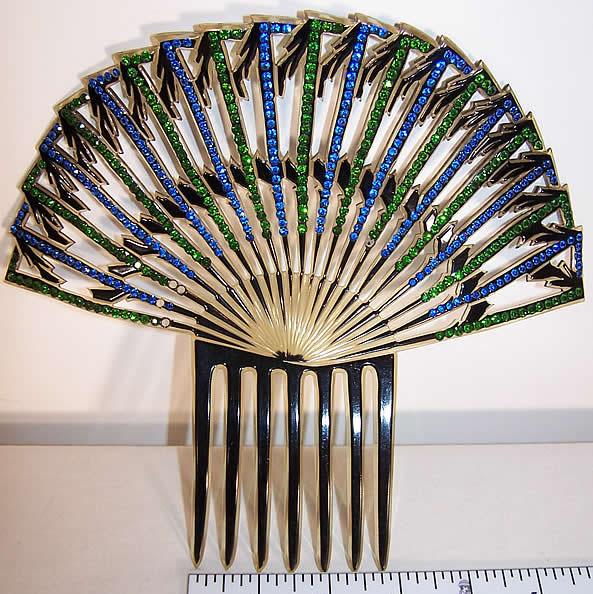 When we think of the 1920s we tend to think of bobbed hair, headache bands, and bedazzled chemise dresses.  There were other options though.  For example, for the lady with longer hair, it was quite fashionable to pull the hair up and back, and hold it in place with an elaborate comb. Huge combs like this one became very readily available, and at all price points.  This one is made of bakelite and decorated with blue and green rhinestones.  This sort of comb was an accessory often chosen by the women who liked the robe de style look, with its slightly lower hem, and hooped sides.  It was a softer more romantic look that suited women who wanted something more overtly feminine. 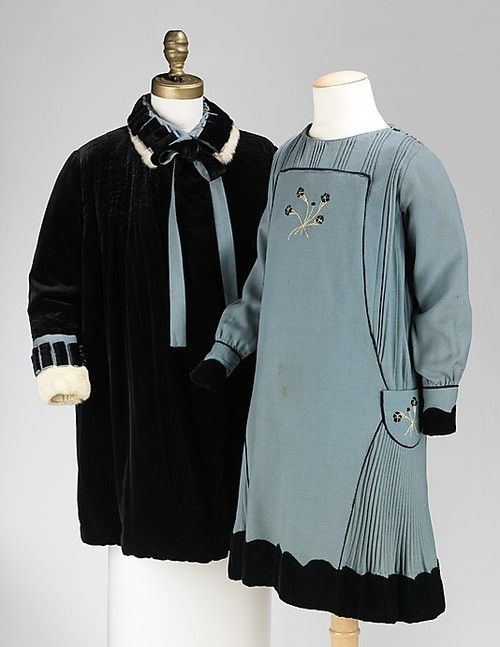 We have never fully given up the idea of dressing small children like miniature adults.  This little girl's outfit from 1928 is a case in point.  There is nearly nothing about this that could not simply be enlarged to make an adult costume.  Even the style of the embroidery on the dress was as normal for adult women, as it was for children.   The color combination is a stark and sophisticated one.  The details of construction are not overly sweet. The only thing my eye rests on as being particularly childlike is the tie at the neck of the coat.  But that could be forgiven.  In all it's a great example of dressing our children for their later adult role. 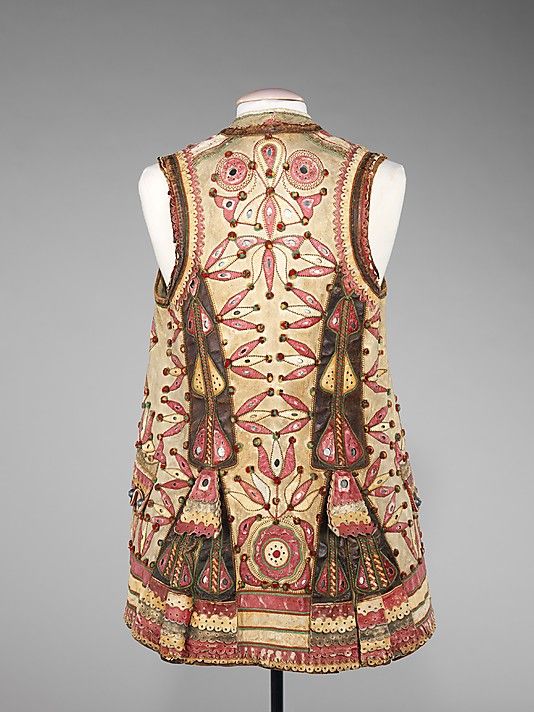 Though it is an inevitability that, like spoken languages, words in the Attire dictionary fade out of use over time, or change meanings, it saddens me that our spreading globalization has taken apparel terms like this one, and relegated them to the status of ethnic costume.  This leather vest is from Hungary, made in the mid 1800s.  The leather has been intricately pieced and dyed, and then embellished with beads and fringes.  Such vests as this were commonplace things, and  were a strong marker of locality, since decorative styles varied from one area to another.  But outside of festivals and reenactments these beautiful articles are no longer worn. The The Attire word has gone silent. Sad. 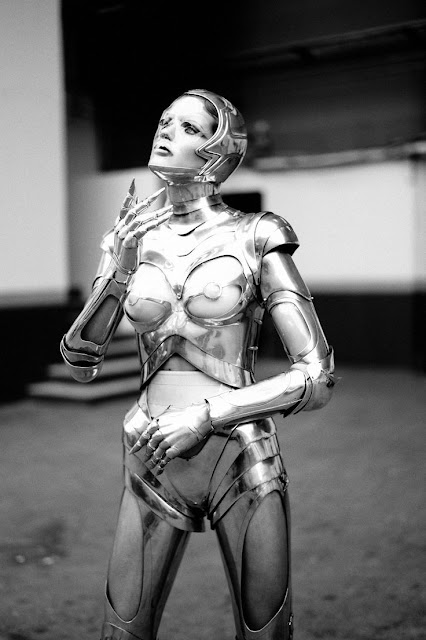 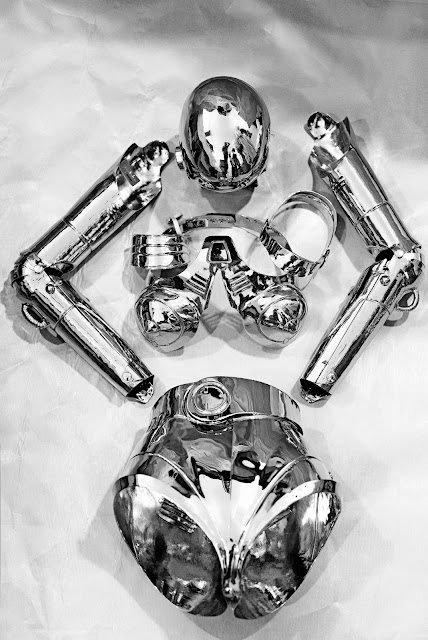 For several years, Thierry Mugler experimented with robot girl costumes as a part of his spectacular runway shows.  Between 1991 and 1995 largely, there would be a model in some variant of the idea inserted into the proceedings, even if it has little to do with the overall point of the show.  Constructed of shiny plastic parts both metallic and clear, these costumes were meant only as punctuation marks, and expressions of design creativity. Since his shows often had an aspect of conspicuous outrage, they always fit in nicely.  Several of these ensembles still exist. 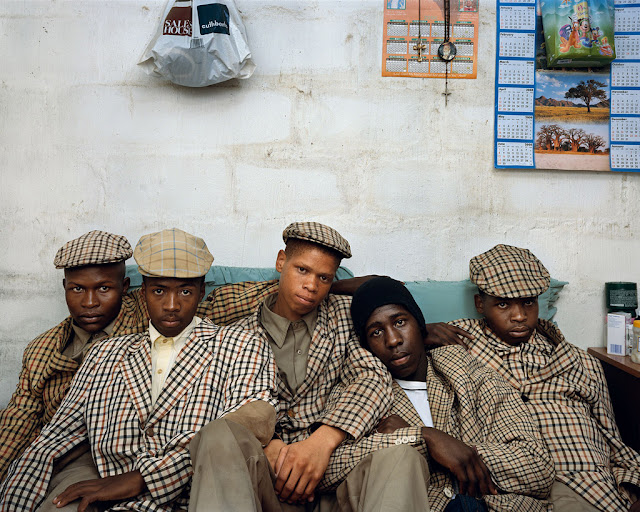 Force of personality is essential in ultimately putting your Attire sentence forward. These young men could seem all of a piece so similarly are they dressed.  It is the power of the people within the clothing that takes these nearly identical ensembles and makes each one unique.  Sure we can tog ourselves out in the most outrageous of apparel choices, or the most conservatively quiet, but what sells it is us, the internal us. 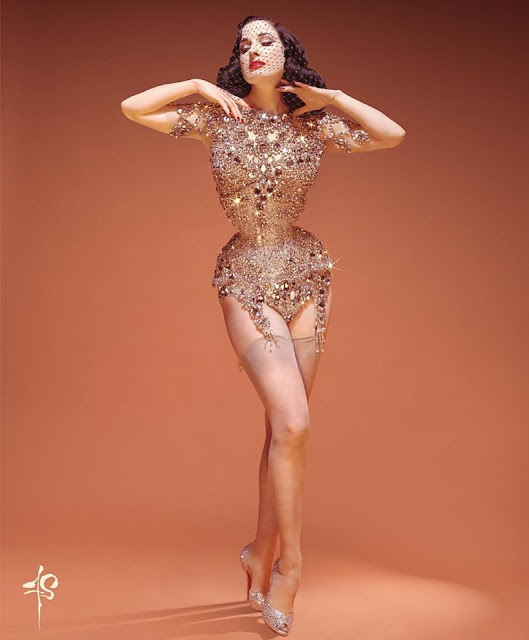 Aaaaaand here she is folks, the queen of burlesque herself, ecdysiast supreme, that dazzling icon of idealized retro-femininity, Dita von Teese!  It must take a deal of time and effort to first become and then maintain such an unassailable living icon.  But for those with the determination, and the willingness to live entirely outside the box it is indeed possible.  What the person who does this accomplishes is extraordinary, because they personally create a whole subset of Attire words that apply to themselves alone, and then get us to the point where we not only understand them, but try to employ them if we can.   Brava, Miss Dita!

Now that I've delved once more into my cluttered closet of a brain for you, you can feel free to dash out into the world for some fun.  Have a great weekend!