From This Point, Where?

It's true we have been at this assemblage of visual cues that is Attire for millennia.  We have donned furs, smeared mud, scarred ourselves, bound our feet, corseted our middles, painted our faces with lead based paint, and endless other variants of what amounts to the boundless human desire to express ourselves.  We have experimented with every sort of variation of proportion, color, and texture. We have garnered ideas from every culture on earth, (whether we understood their full meaning or not).  And technology has been there to hand to forward our deepest desires, and make them realities. 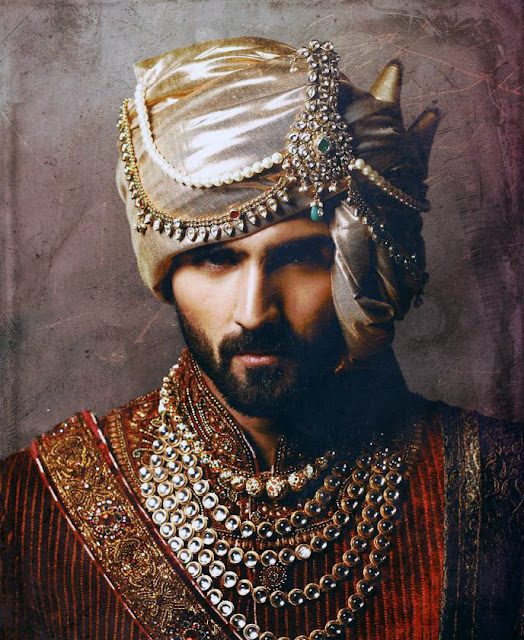 We have gone from mostly having to craft our clothing ourselves, to there being myriad cottage businesses whose life work it was to see people clad.  Then we began to mechanize and more was available to a much broader audience than before. Now we have reached the point where an idea configured by a designer can be in the hands of the manufacturer in another country this morning, and a sample can be in the designers hands, via Fed Ex, by the next day or so, allowing us to push production even further,  and even faster.   The vast bulk of material goods available at every price point level is staggering to behold.
But that said, where do we go now?  What is in store for us?  Now I am not going to be foolish enough to give you a straight simple answer. Everyone who has attempted to predict what we would be wearing in the future has not only been wrong, but catastrophically so.  To be honest, the closest anyone has gotten to seeing what the future holds is the film Blade Runner, which posits a massively polyglot culture with a somewhat Asian spin.  Sound familiar?  It should.  We are in it now, though not as dramatically. 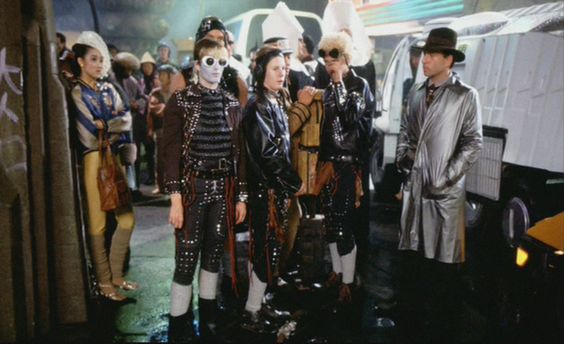 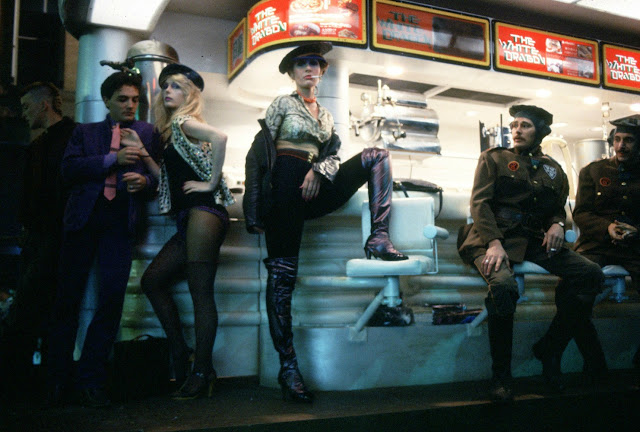 In Blade Runner, endless combinations of seemingly disparate influences combine to create an individual's personal look.  That is even manifested in the clothing of the myriad extras.  I bring it up because it is one fairly realistic idea about where we will go sartorially over the next decades.  If we take the increase of global communications, and the increased access to differing cultures that creates, then it seems obvious that all that input and sensory information would result in a melange of final communicative responses.  and living where I do, in San Francisco, that is most certainly true.  It is commonplace for me to observe people who are wearing items of clothing with cultural source points that are from all over the world. 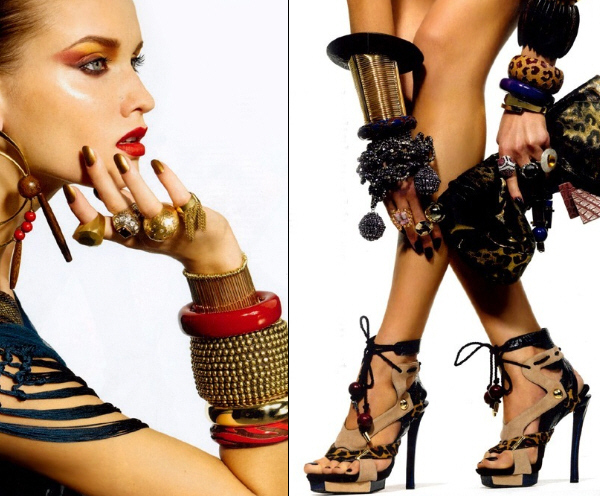 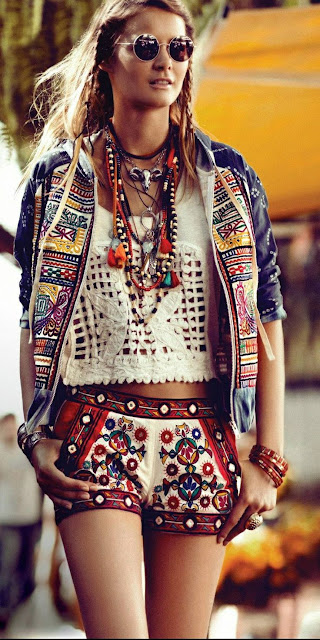 When you add to it the emergence of technologies that could in a decade or so make it possible for average folk to have custom cut and fitted clothing that is unique to them, the potential for individual expression based on our personal interests and knowledge is endless.
After seeing personally what computer technology is currently capable of with regard to patterning and fit, combined with what is already possible with 3D printing, it is easy to extrapolate that we could find ourselves in very new territories in not too many years to come. 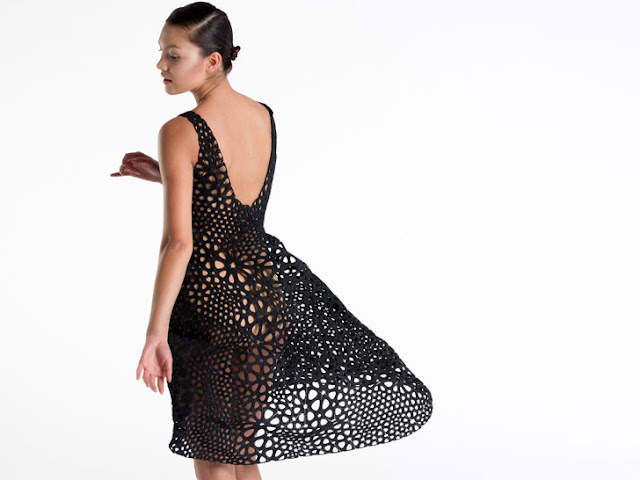 One possibility would be that you could go into a shop, and instead of pulling clothes from a rack, you would select concepts from a program after having your body scanned to the micrometer,  customize the design, and then select materials, and finishes like buttons or zippers, and have the robotically assembled item delivered the next day.
Another idea would be similarly devoid of human constructive intervention.  Send to your wall mounted printer the commands for what you'd like to wear and while you are taking your morning shower and drinking your coffee, it is busily printing out clothing for you in the precise size, style, textures and colors your require.  Sounds awfully Star Trek, no?  Truth is that the groundwork has already been laid for just this sort of thing to be realized. 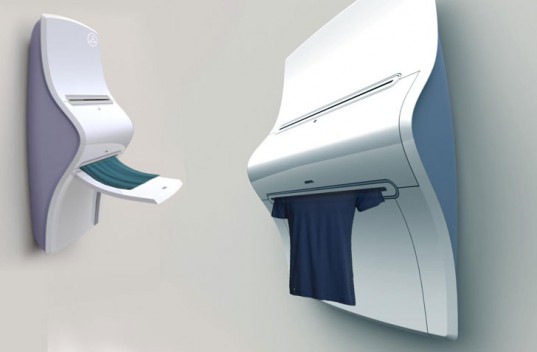 Or perhaps we might see this occur.  There has already been a huge uptick in the number of designers out there. And a goodly number of them, the majority really, are working and living doing their craft.  Sure, they aren't world wide brands, and they work very hard for little return, but they are paying their rent and producing their product.  What if what we are seeing is a beginning of the return to a cottage industry model for apparel design and construction?  The very technologies that affect so dramatically the ability of major houses to do what they do is increasingly available to people with less financial backing.  What that could result in is a small concern of only a few people, or even just one person being able to realistically work and create custom clothing for a clientele that would still afford themselves enough leisure and funds to enjoy their lives a bit, rather than be chained nearly literally to their sewing machines. 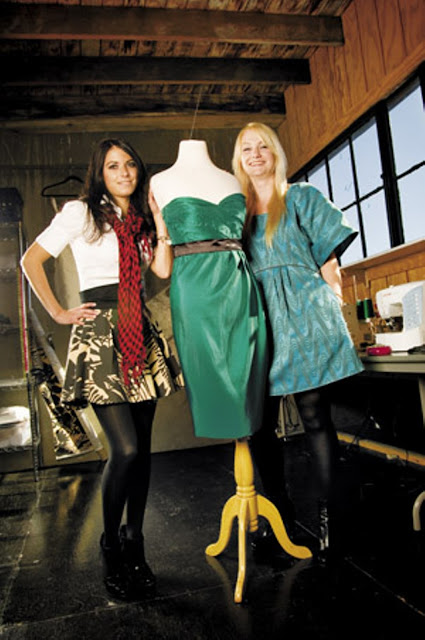 The realities will be different from any of these things no doubt. One thing I feel certain about. The current model of manufacture is ultimately unsustainable.  We cannot continue endlessly at this pace of production or consumption, so something else, or somethings else need to be positioning to take up the work when it falters, as falter it will.
Posted by Paul G. Ellis at 7:21 AM