I know that I have done a one shot post before about this type of garment.  It is a favorite period of mine, however.  And this example is just such an extraordinary one that I had to share it. 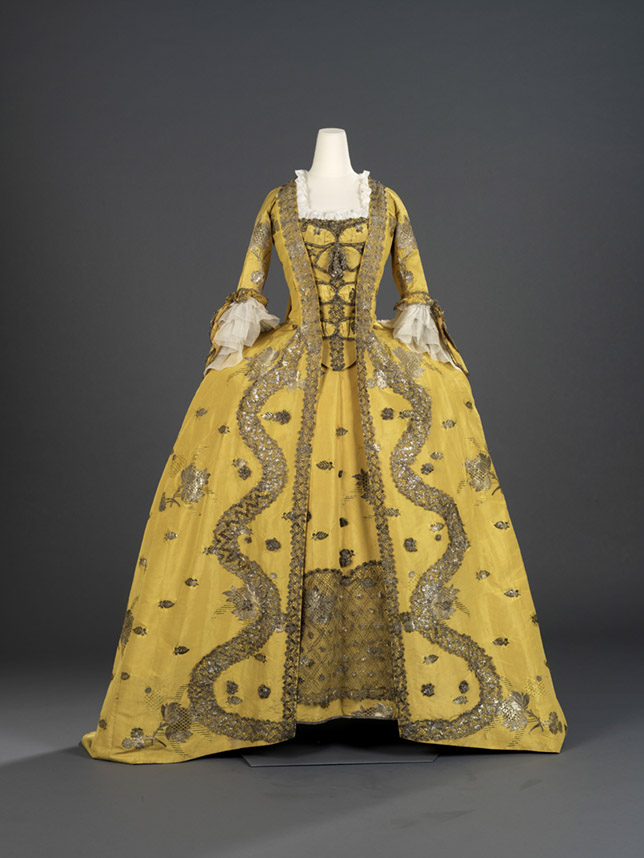 The first thing that I see when I look at this is how perfect the proportions are in every respect.  The exterior shape, the silhouette of the gown is an idealized cone that takes the eye without effort right to the wearers face.  Where in other versions of the gown with panniers the line gets broken by the width of the skirts, this flows smoothly upward. Then, the material has been used in a way that maximizes the impact of the pattern, with the expert matching of the main elements of the design so that the visual harmony of the entire piece is undisturbed.  The placement of the silver lace decorations gives a kind of stately motion to the design, while also leading the eye up from the hem to the face.  Even the use of the textile and the manner of decoration employed in the stomacher works slyly to lift the eye up, first by concentrating our attention on the relative complexity of it, then ultimately releasing our view to the neck and head. 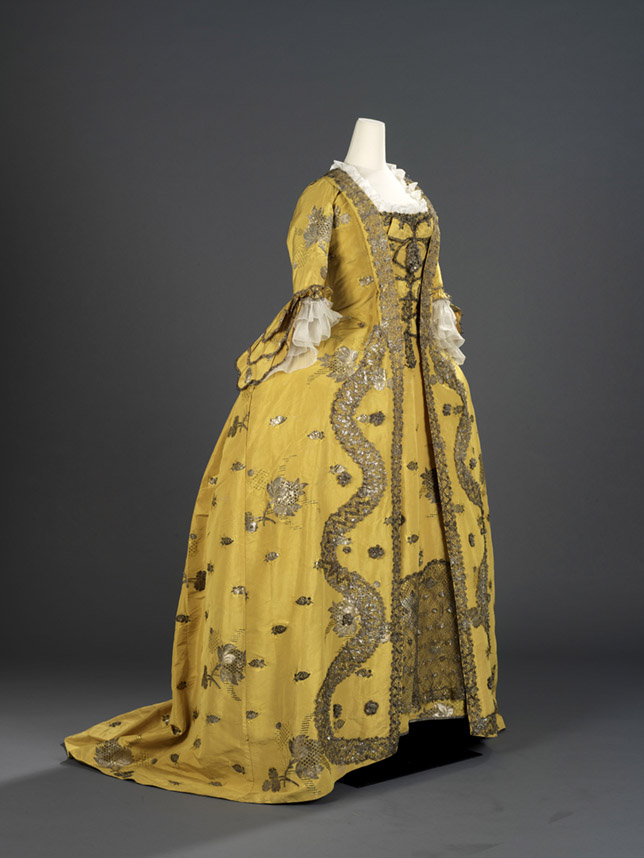 Let's take a peek at that fabric, shall we?  Okay, so here we go.  It's a relatively simple appearing design for the time, but don't be fooled by distance.  Here is a close up of one of the floral motifs in the weave. There are four different types of brocade weave utilized in the creation of this silver work.  The ground weave appears to be a simple plain weave, so all the attention goes to the brocaded elements.  As well, that yellow, and other similar shades, were colors that held their popularity for a surprisingly long time considering how often tastes changed.  I have seen examples of panniered gowns covering four decades that all rely on variants of this same sunny color. 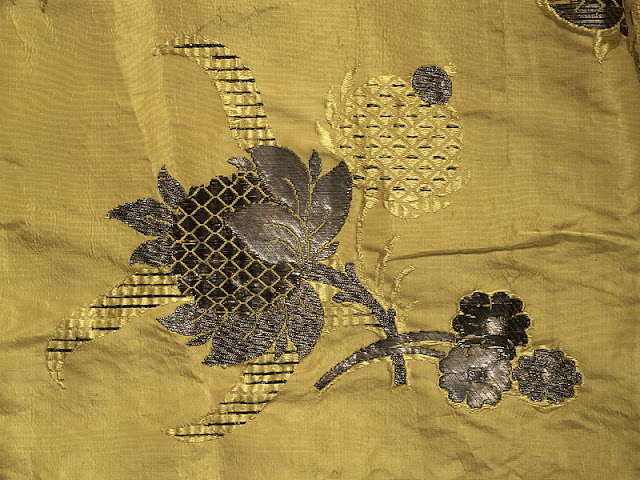 The undulating application on the overskirt that continues up the side of the gown's front are pretty much a textbook style.  It was one of the most often used methods of trimming out a large area of a dress of this sort.
The huge expanse of silver netted lace that covers the lower half of the underskirt is also a common element.  Frequently a wide self ruffle, or a band of lace would be used in this position on the underskirt. It had an additional advantage, while having great visual impact, it took little time to apply. 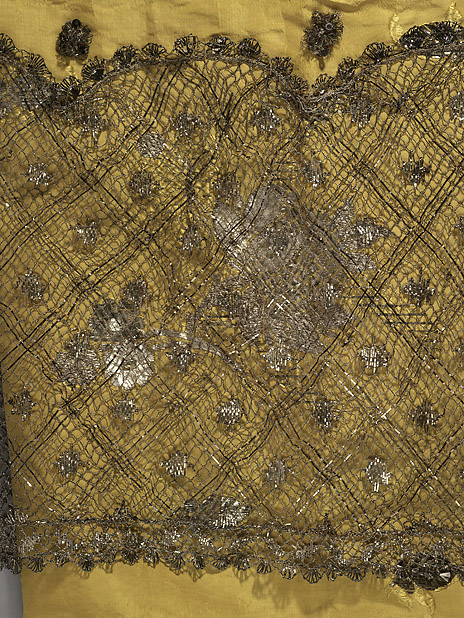 The sleeves of the gown are essentially what we would today call raglan, with the armseye of the sleeve both very high and pulled far to the back. This cutting technique served to help keep the wearers shoulders back and chest high, maintaining that signature erect dignity we have come to think of as normal for the period.  Frankly you had no choice but to stand up straight, your clothes allowed nothing else.  The three tiered sleeve cuffs were a design element that held sway for decades. So popular were they that they were almost a requirement.  And they were nearly always cut in shallow scallops, as you see here, then trimmed on their edge with fly braid, guimpe or ribbons. 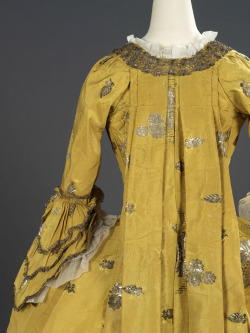 As a side note, the white ruffles at the neckline and cuffs are reproductions, but they accurately show how the the gown would have looked when worn. 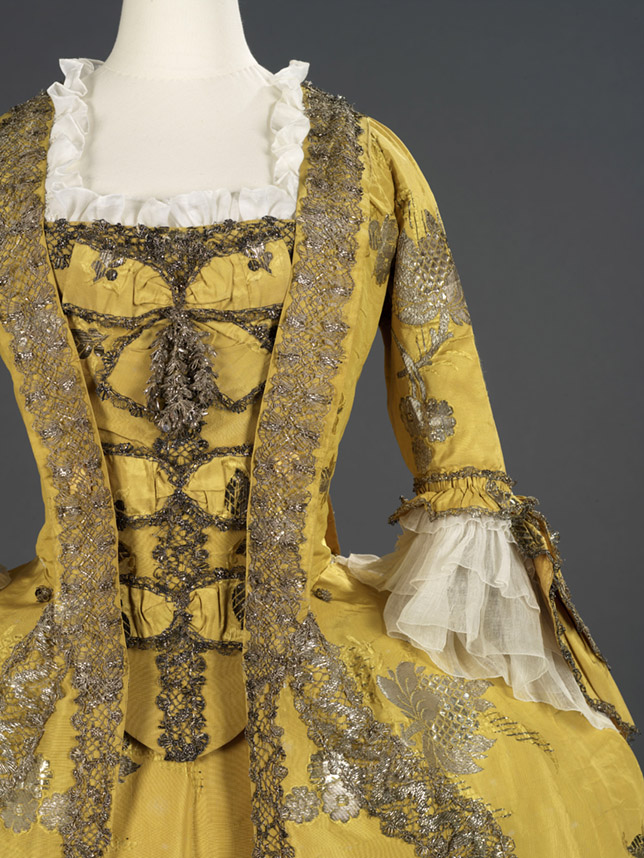 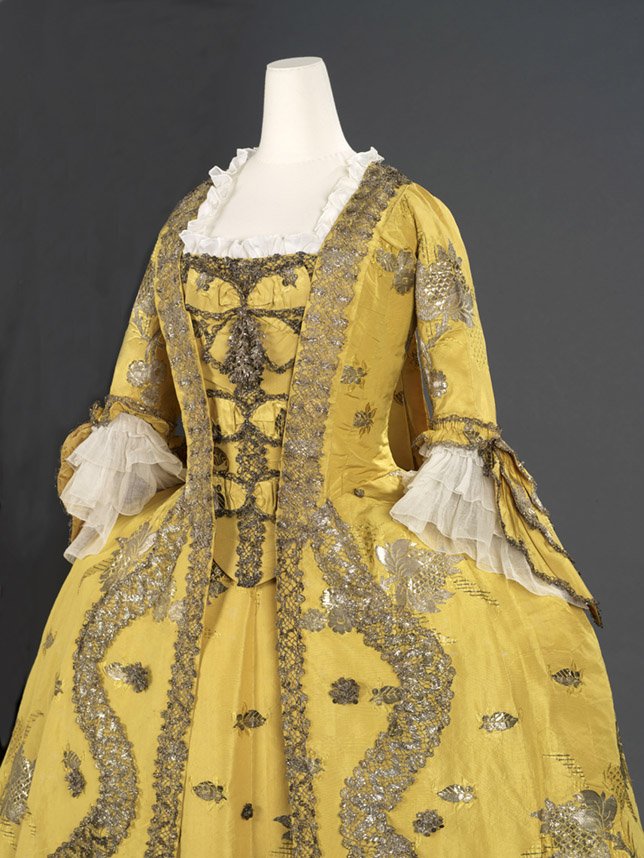 And then at last there is the stomacher.  The decoration of the stomacher is not very complex, which is a good thing, considering the mass of silver fly braid and lace that trims out the edges of each of the structured bows, and runs down the center point.  And everything about the manner of its decoration adds to the gravitas of the whole. This was not meant to be a playful garment, but one for serious occasions.  Were this meant for daytime, or more casual pursuits the decoration of the stomacher would have been more playful, the bows less rigid. 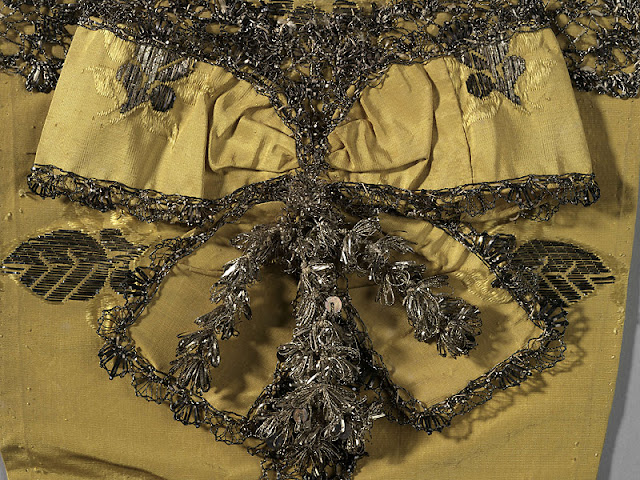 So to sum up, this garment is a sublime example of the period and style.  It is not only beautifully constructed and decorated but is harmonious in every part of its design.  Whoever was lucky enough to have owned this was a woman of great taste and restraint.  It must have felt marvelous to be seen in this amidst the candlelight of an evening gathering. 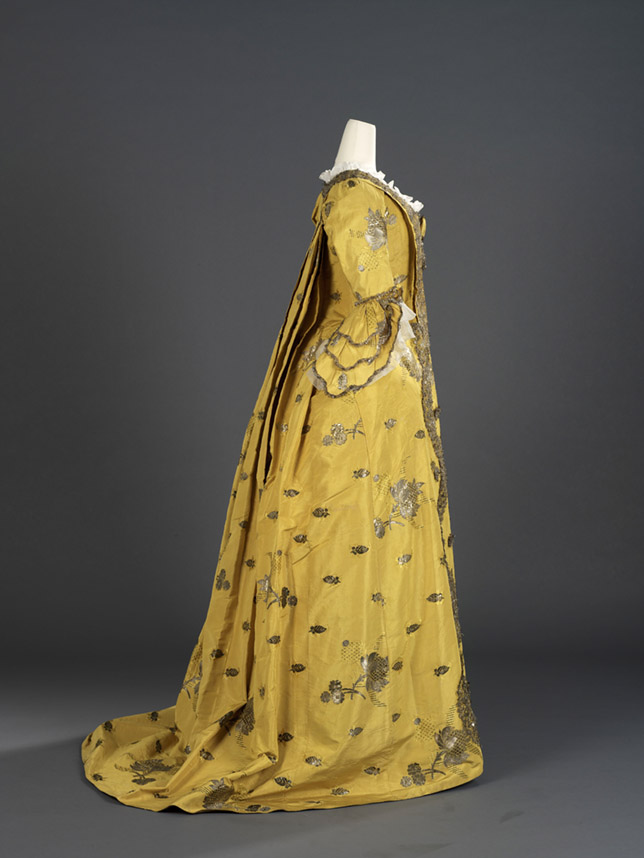 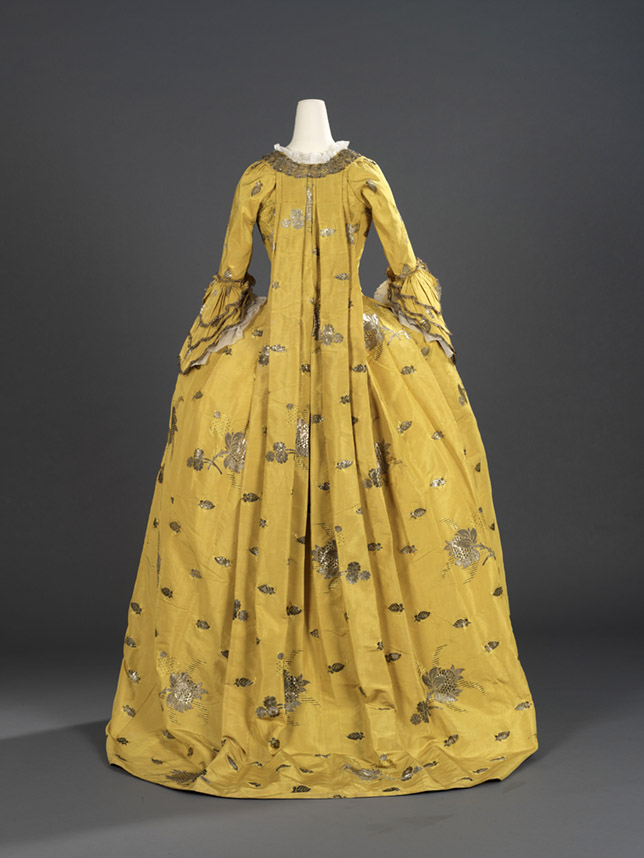