One of the many things I appreciate about the Metropolitan Museum of Art in New York is that they often will record numerous detail images of their objects so that a researcher can get as much information as possible.  This dress, which includes an afternoon bodice and an evening one, also has a matching bag which has managed to survive along with the dress itself. 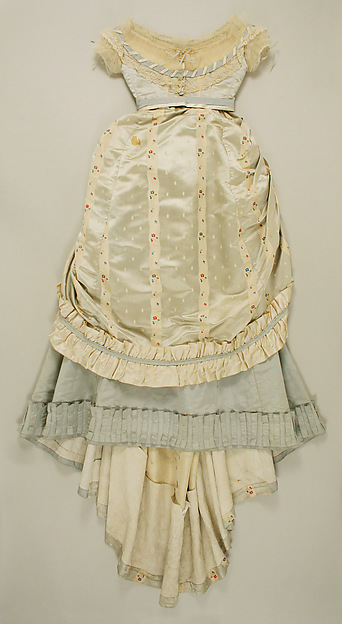 Very little is known of the designer, Mme Depret, who was working in Paris at 28 Rue de 4Septembre.  This ensemble comes from 1867, when the silhouette was beginning to change towards the emerging bustle shape.  The other thing that is different here is the manner in which the garment is presented for us.  Typically I try to show you things that are, (at very least) on a tailoring dummy.  This gown has not been photographed on a manakin or person, so we must content ourselves with seeing it laid out flat.  I mention this because the skirt would still have been quite wide around in 1867.  So engage your imagination to visualize the ovoid shape of the dress when worn.
Made primarily of a ribbon striped silk satin brocade and a solid colored silk repp, the dress has all the elements that would become commonplace over the next decades. The most important of these is elaboration.  The sheer bulk of detail is amazing when crammed into one garment. 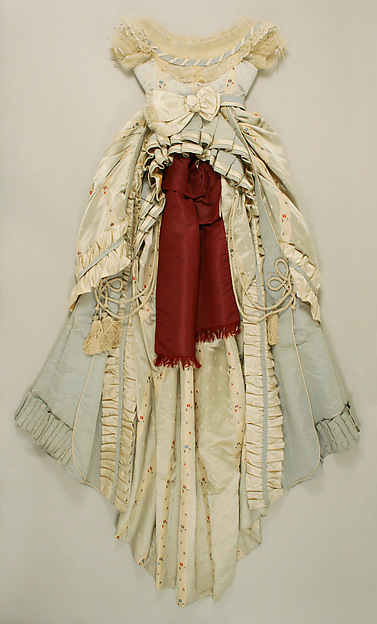 From the front, it seems fairly restrained, but when viewed from the rear it becomes an explosion of overlapping decorative details.  The underskirt has a double sewn box pleat around its base.  In the center back the underskirt is parted and folded back to reveal a large gathering of the satin brocade.  This is further decorated with both an off-white double ruffle that is center sewn with a band of the silk repp, and headed with a doubled box pleats that are banded with the same off-white silk. 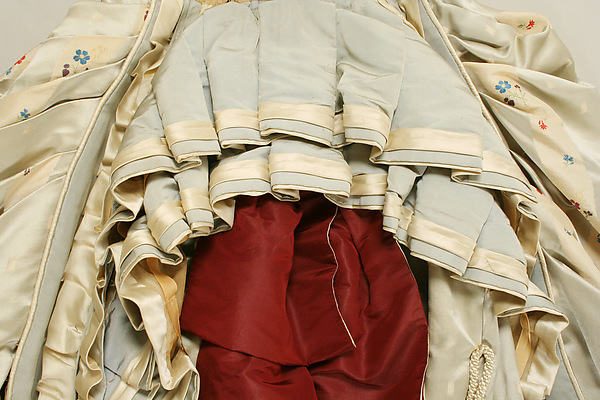 Add to this the massive fall of claret colored fringed silk, and the looped silk cords with tassels.
Whew. 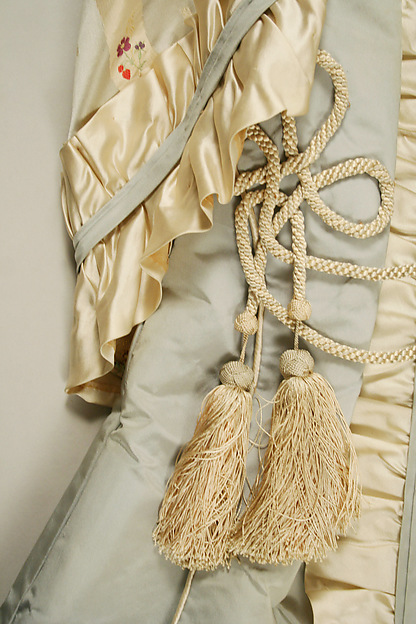 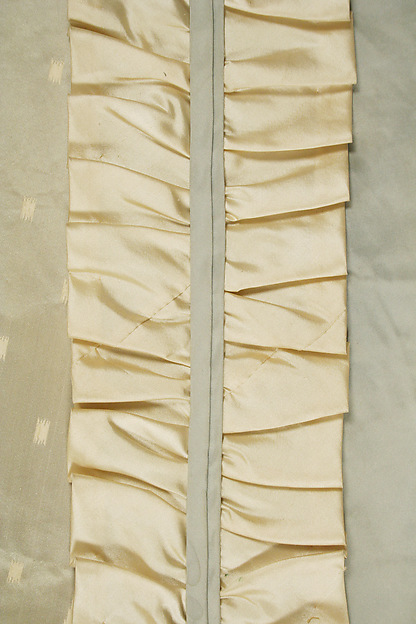 Let's move on to the overskirt and bodice, shall we?  Or are you exhausted already?
The overskirt of the dress is designed as an apron which gathers up on the sides. It is edged with the same style of center sewn pleating that decorates the opening in the rear of the skirt. at the center back, just at the waist is a bow in off-white. 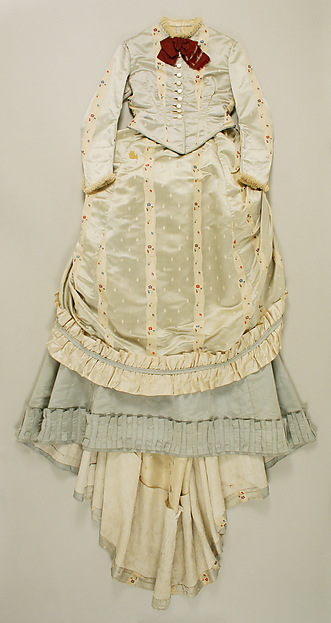 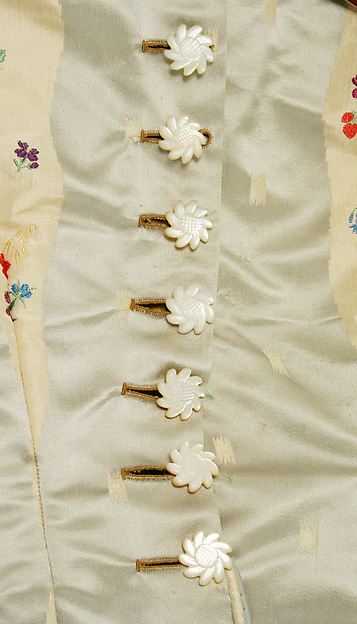 The day bodice buttons on the front with carved mother of pearl buttons in the shape of flowers.  The material is the striped brocade, and the overall effect is quite simple since the bodice has little additional trim.  Only a very narrow, but dense ruffle of lace at the collar and cuffs, combined with a neckline bow of the claret colored silk finishes this day version of the bodice. 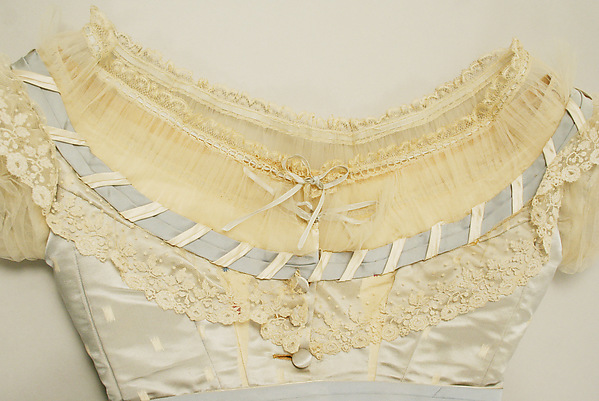 The evening bodice is surprising in its relative simplicity.  It relies on cream colored net and lace, together with a shoulder-spanning band of satin that is held with bias bars at regular intervals to achieve its effect.

And finally, the little shoulder bag has a strap of clear glass beads, which also edge the perimeter of the bag. It's trimmed with a fall of lace and a row of puffed satin gathers. Such a bag as this would have held  only a few small items.  It might have had the lady's handkerchief, her opera glasses, and possibly enough coin for a carriage if she was unaccompanied. 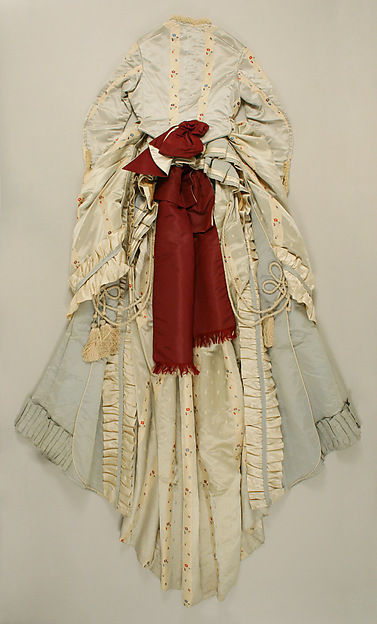 What is not readily apparent to our 21st century eyes is that that huge mass of detail gathered towards the back was not just an opulent display of wealth.  It was also a profound sexual signal, focussing the attention on the rear, but in a subtle way that appealed to the over-rarified sensibilities of the Victorian mind.  They were not willing to come right out and say so, but the sight of a woman moving through a room with that volume of frivolous detail shifting about was rather like the plumage of a bird. Though the animal kingdom makes the males the showier of the genders.
All in all, this is a remarkable save from a past era, and I thank the Met most heartily for keeping it safe for us all.